THIS story on the United Speed Shop '55 Chevy and '52 Ford F1 pro touring pick ups was originally published in the March 2016 issue of Street Machine magazine.

SOME days we like sweet, some days we like spicy, but what happens when you can’t decide? Maybe that ‘why don’t we have both?’ kid from the taco ad is onto something, particularly when it comes to our automotive tastes.

This ’52 F1 and ’55 Chevy 3100 come from opposite sides of Detroit, and while very different methods were used to get to the end result, the bloke who built them had one goal in mind. “They had to be awesome street cars,” Ryan Carter asserts. 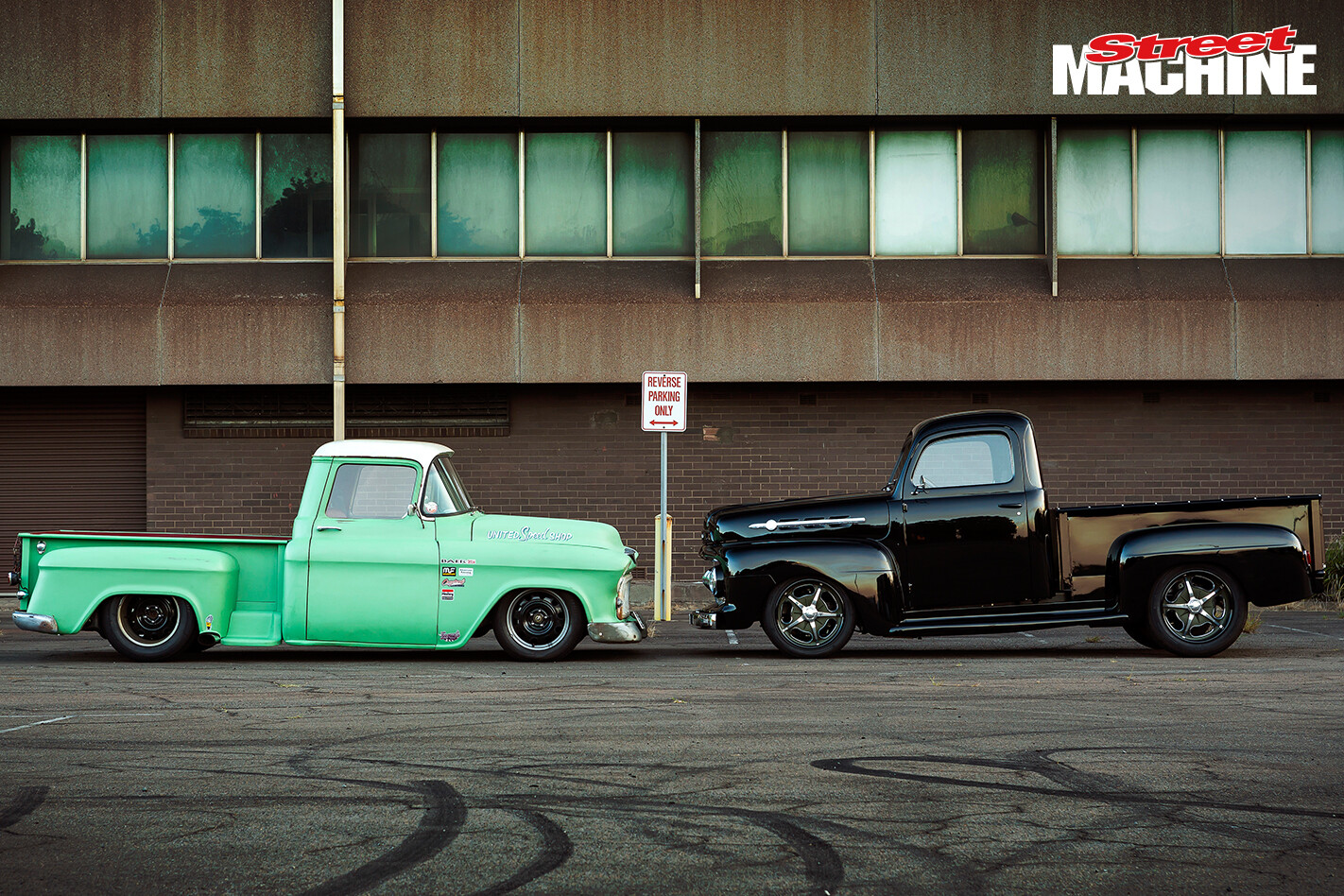 Ryan is the bossman of Newcastle’s latest hot rod haven, United Speed Shop. You might recognise his name, as he spent years doing killer renderings for our now-defunct Expression Session section.

“Les Elliott’s F1 was the first build I took on as United,” Ryan explains. “He had a neat, mild pick-up that was an ex-Jim Beam promo truck, but wanted something more hot-rodded, with a vintage feel. 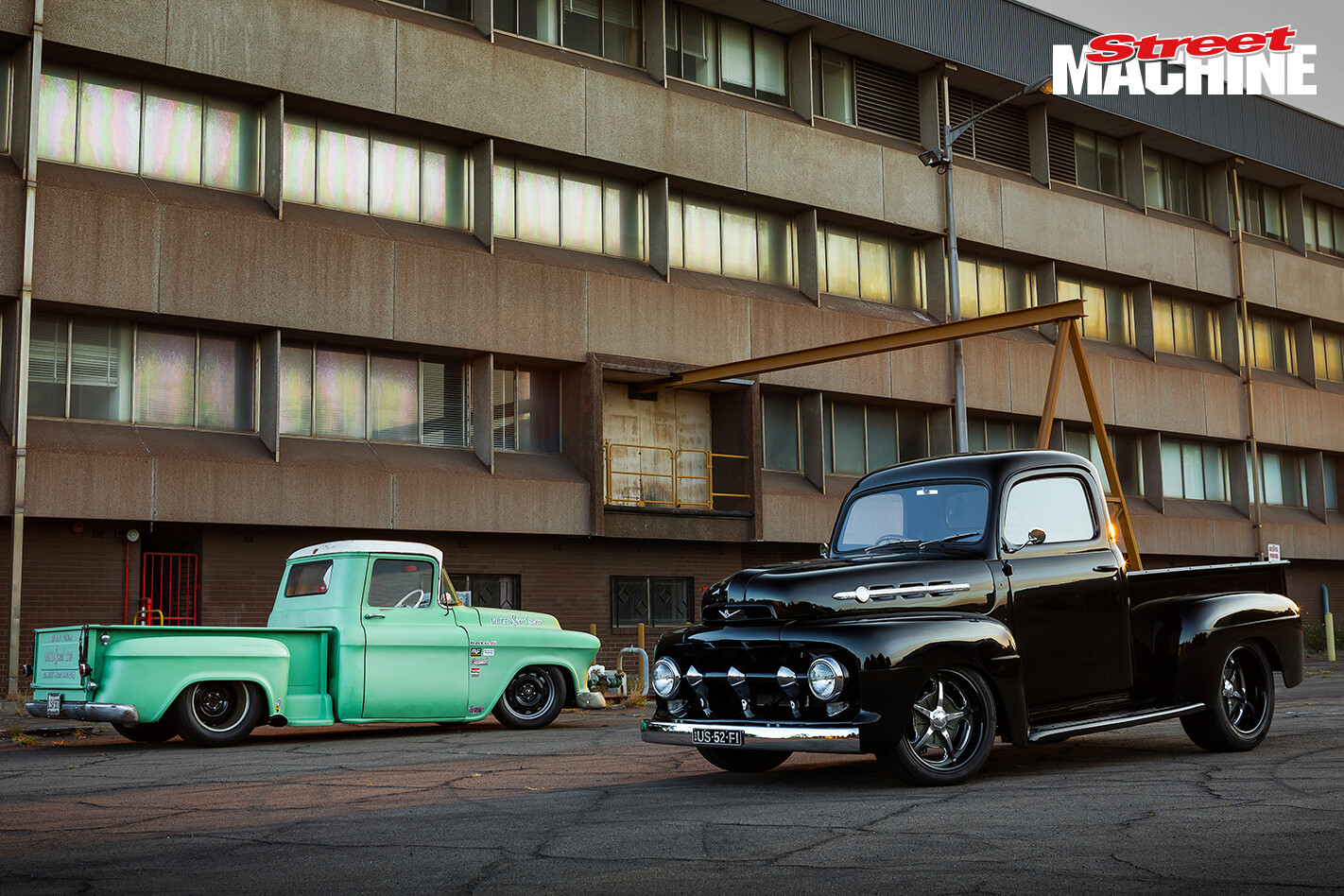 The black F1 was far more farm truck than slick streeter when it rolled into United’s Waratah shop, but it soon was down to a bare frame for Ryan to re-engineer. “We did our own parallel four-link and independent front end with power steering rack, big Baer disc brakes, QA1 coil-over struts, hidden battery system, rewired it and got it as a good base to be reliable and drive really nicely,” he says. “It was super-important to make it as liveable as possible for Les.” 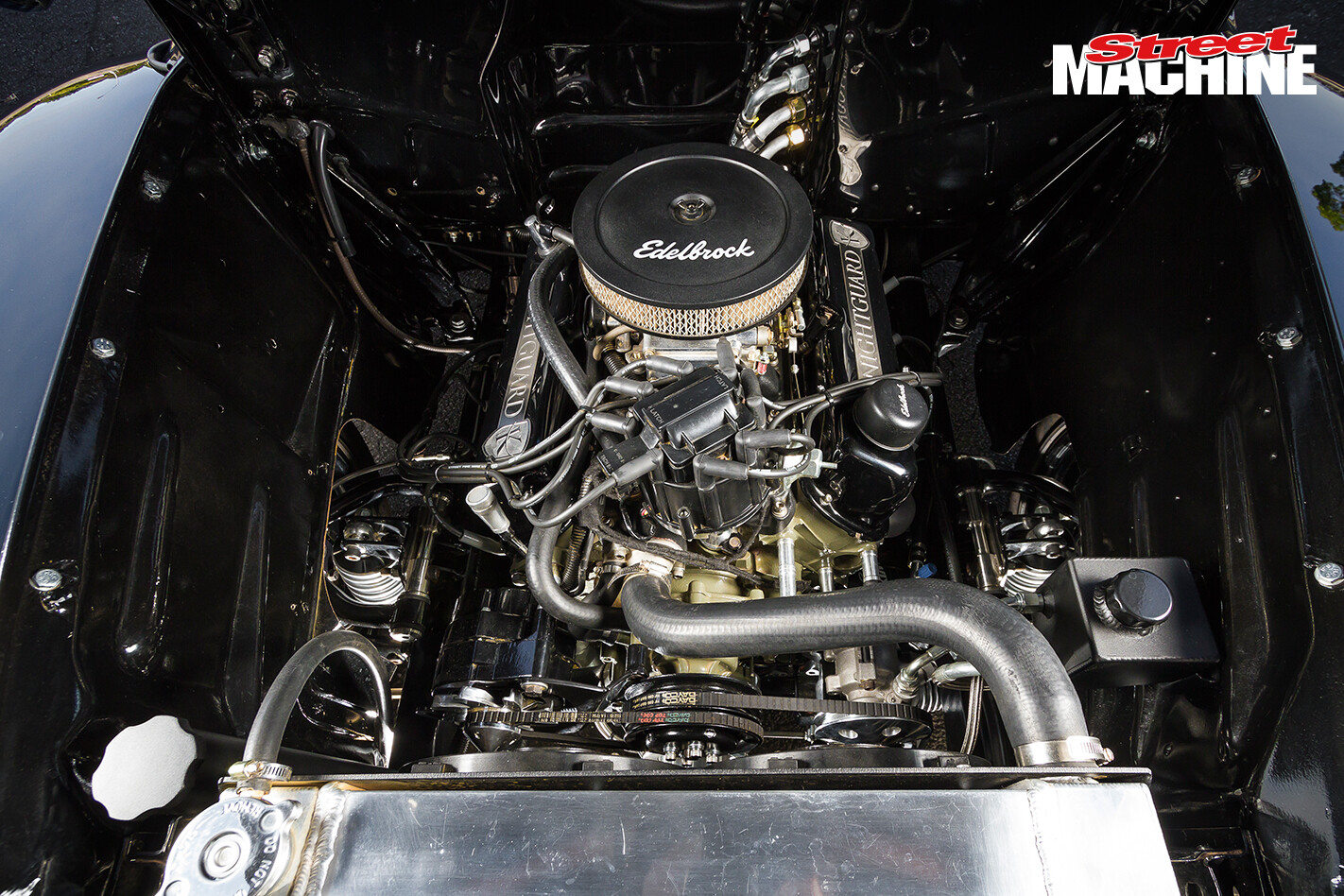 The little 302 was treated to a reco, with an Edelbrock intake, Holley carb, four-into-one headers and custom 2.25-inch exhaust, HEI ignition, and a modern cooling system with a custom shroud all added for good measure. Ryan reckons Scott Barter from Oxytech Powder Coatings did more than his fair share of work on the truck, coating the custom valve covers, suspension and those slick custom Schott Accelerator 19x8 and 20x10 billet wheels. 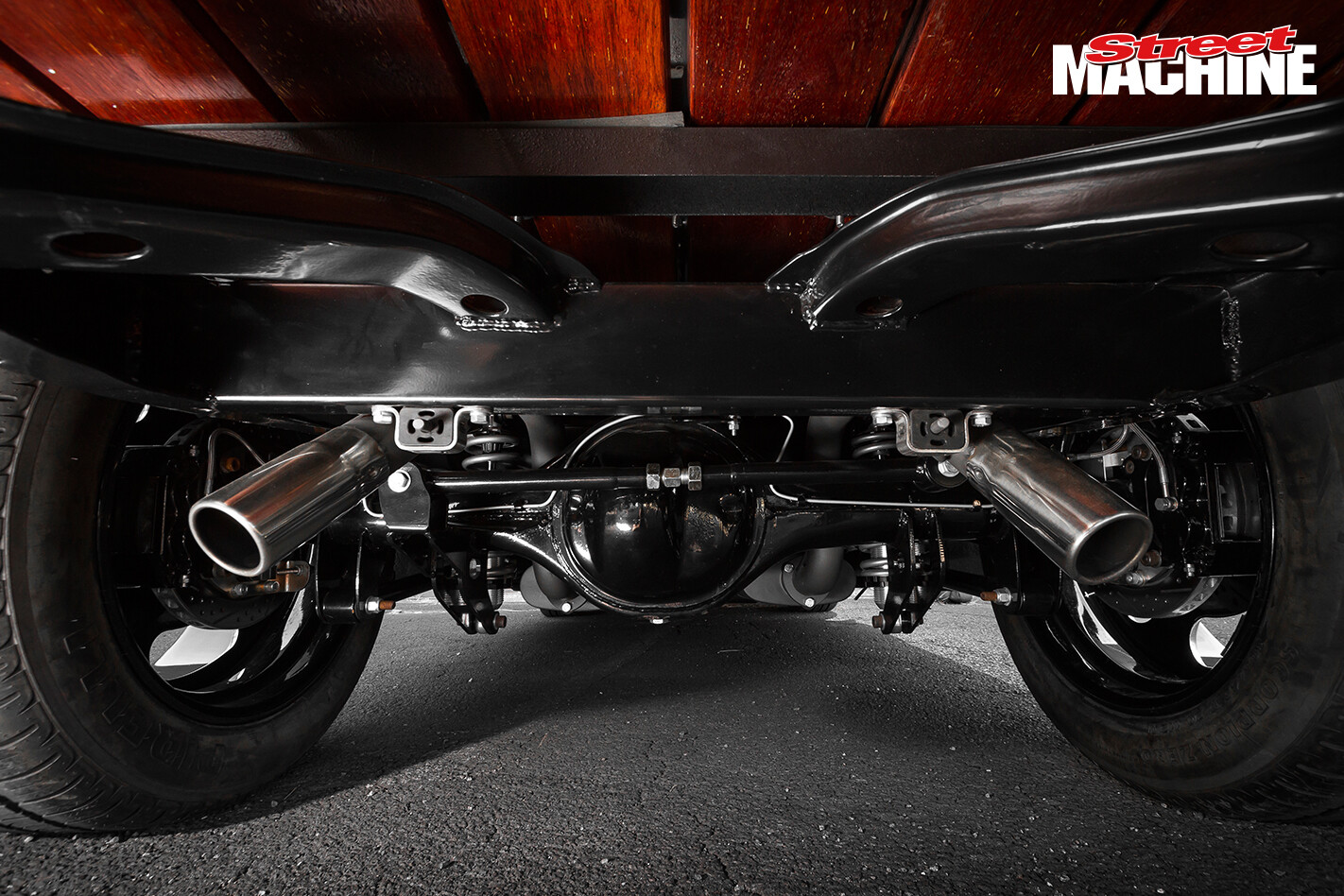 Fitting the big wheels and making it all look meaner than Henry intended meant the USS crew put in a bunch of hours on an already good, straight body. The rear wheel tubs were remade, a rollpan was added to the rear, the front bumper was tucked three inches and a custom hardwood bed floor made. 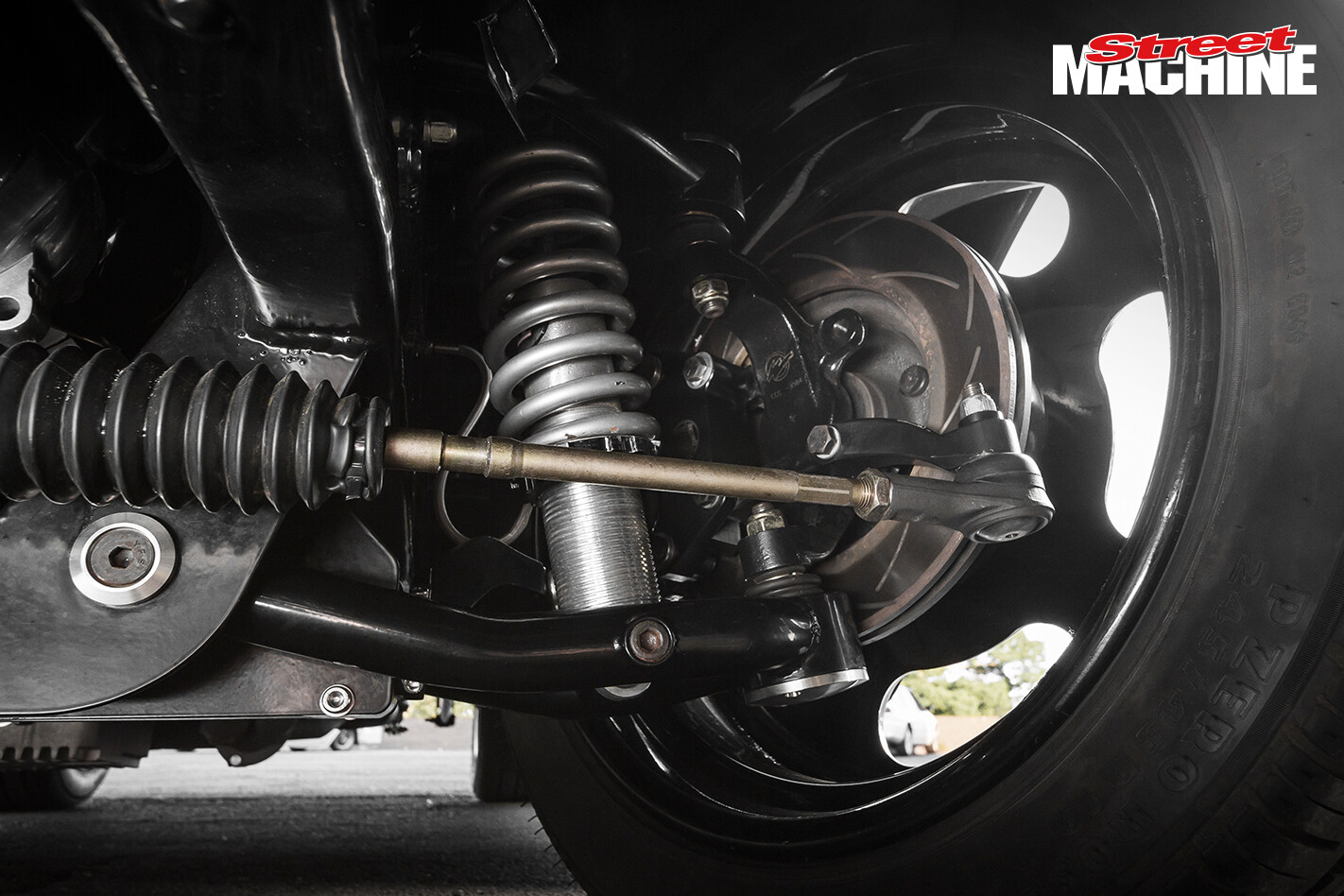 The cab was fully soundproofed in Car Builders acoustic material, while Steve Longbottom at Trimlab modified the Mazda Bravo bench to fit, before covering the seat and door trims in olive leather and black carpet. 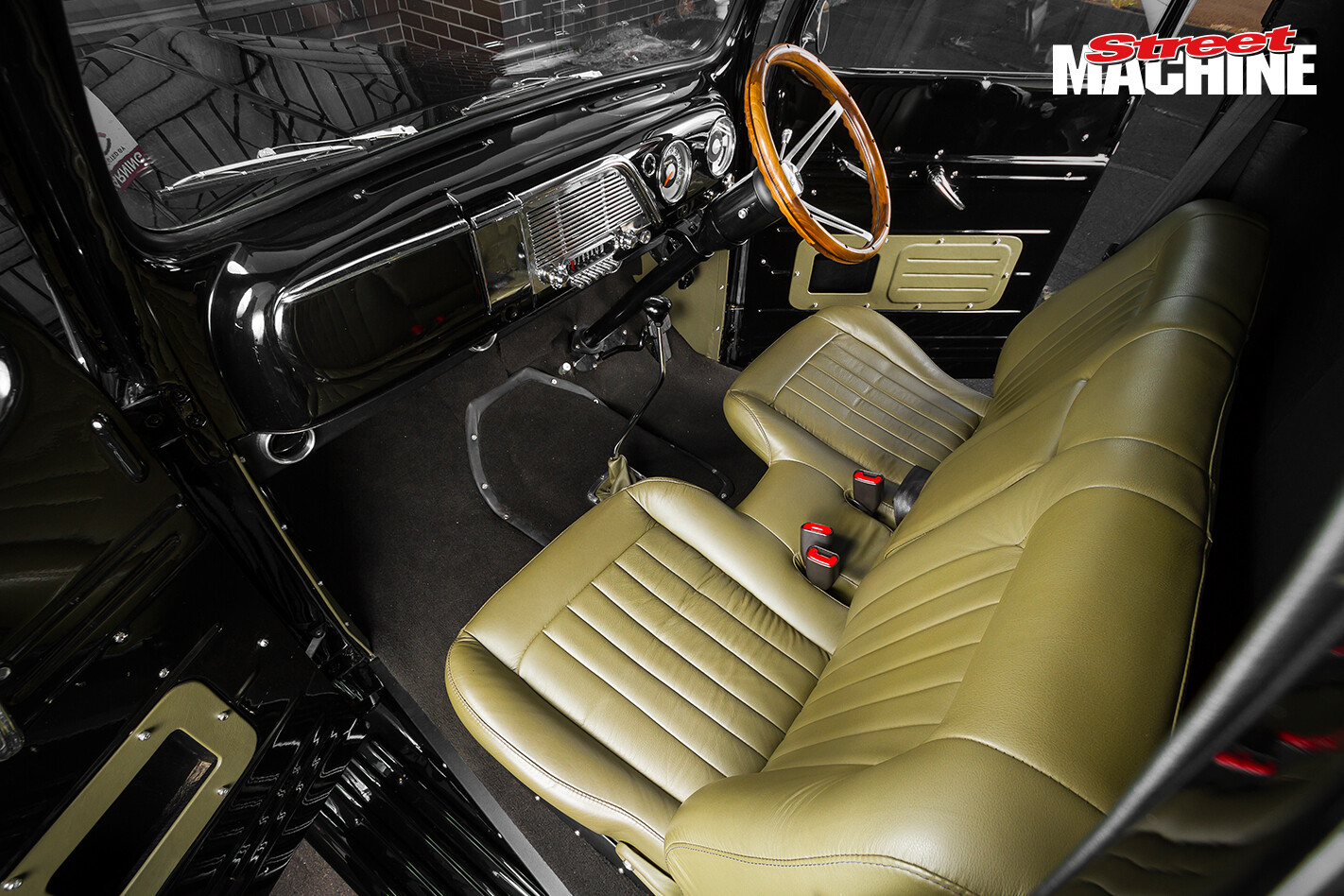 Ryan’s spearmint shop truck doesn’t have anywhere near that sort of luxury inside, with a retrimmed HT Kingswood bench and not much else, but it makes up for it in other areas. “I built my ’55 as a semi-pro tourer that looks like a survivor, so it while it looks weathered it hides an injected LS motor and six-speed manual out of a late-model SS Commodore.” The 5.7-litre LS1, six-speed and 4.11 gears in the HiLux diff make for a super-snappy powertrain, especially with the Holley injection, flash-tuned ECU and custom exhaust. “My truck sits on a ’55 Chevy 150 passenger-car frame my dad knew of in Taree, NSW,” Ryan says. “I’d bought the cab and tray from Victoria but didn’t have a chassis, but this one had been sitting in the front yard of a sandblasters for 10 years. 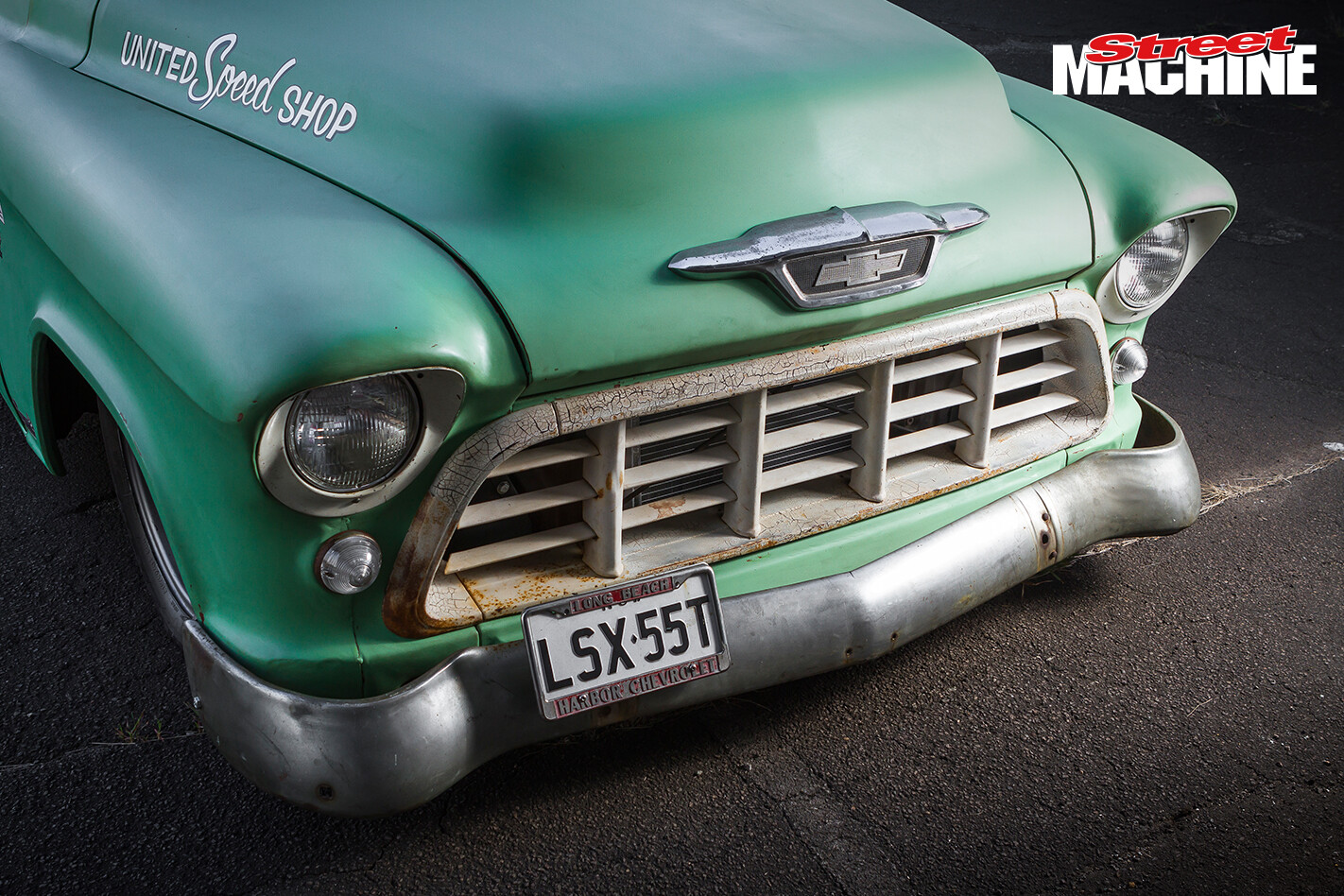 “I found the cab when I was working at The Chop Shop with Laurie Starling and we drove through the night one Friday to pick it up. That was an epic road trip with many good memories. I’d had another 50s Chevy pick-up years ago on ’bags and more highly finished, but I wanted this one to be a bit grittier, on coil-overs, to act as a shop truck for United.” 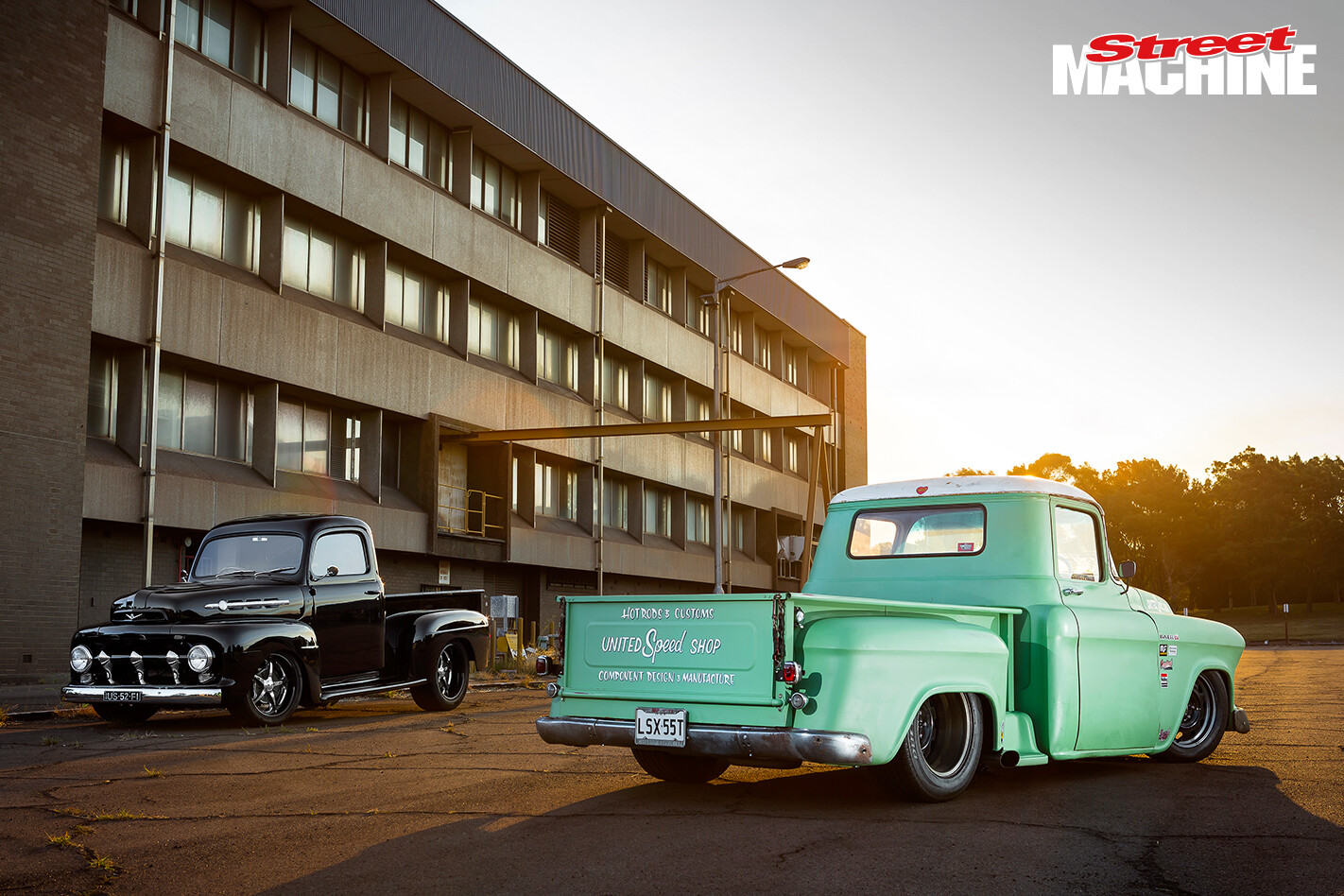 Surprisingly, the cab only needed minor work to fit the 150 frame, though the T56 six-speed forced Ryan and USS fabricator Eric McKenna to make a new transmission tunnel. They also had to weld a cutout section for the firewall and plug all the old holes, before Sam Rayner of Bombwerks sectioned the stock dash for the right-hook swap. 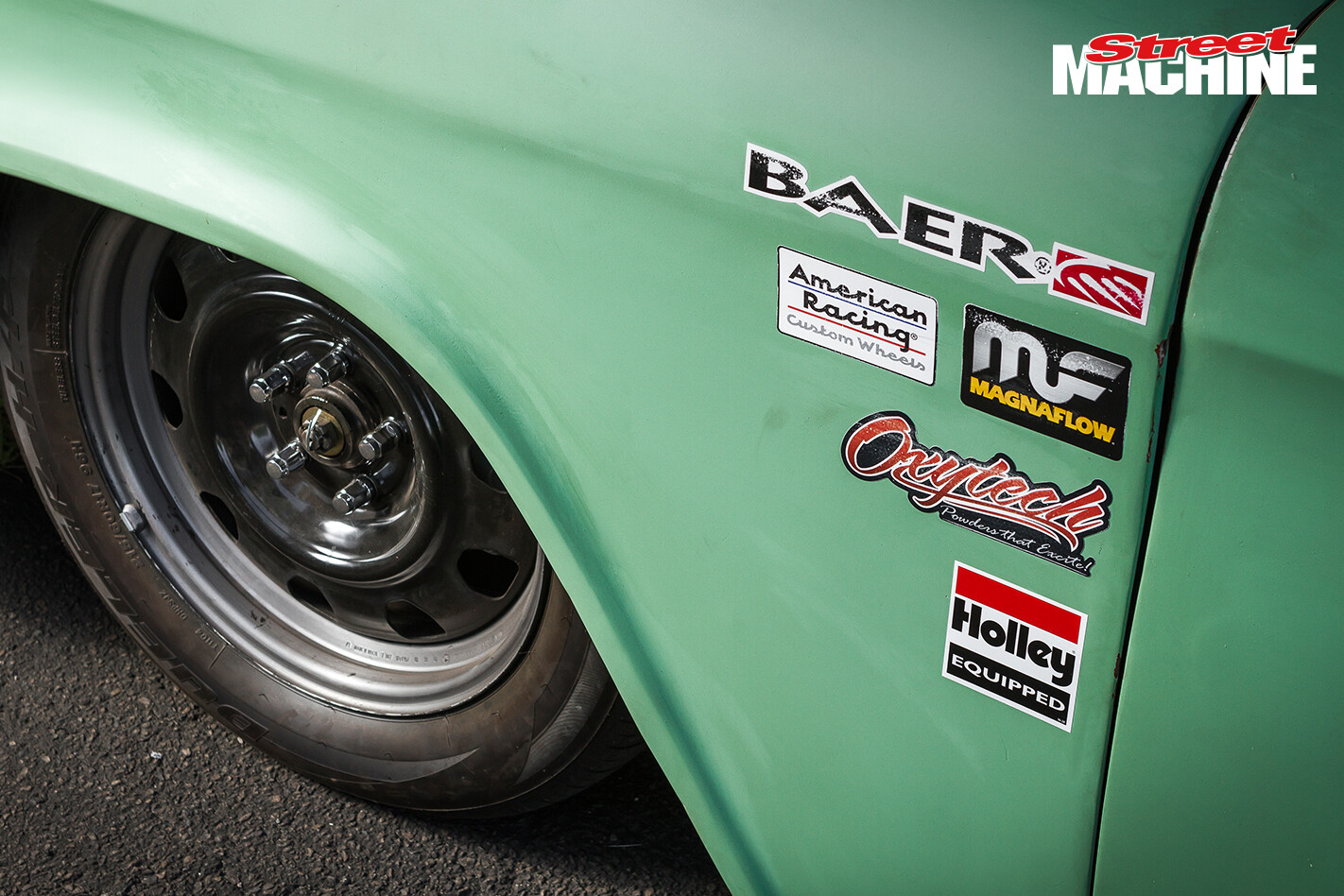 Ryan thrashed on the truck after hours and on weekends. Big jobs included fitting Baer four-pot disc brakes and a Commodore brake booster and fuel tank; re-making the bed floor and running boards; whipping up a custom exhaust, four-link rear end and independent front end; doing a steering rack conversion; even modifying the rear end to suit a bed-hitch for a massive trailer he plans on towing to shows. 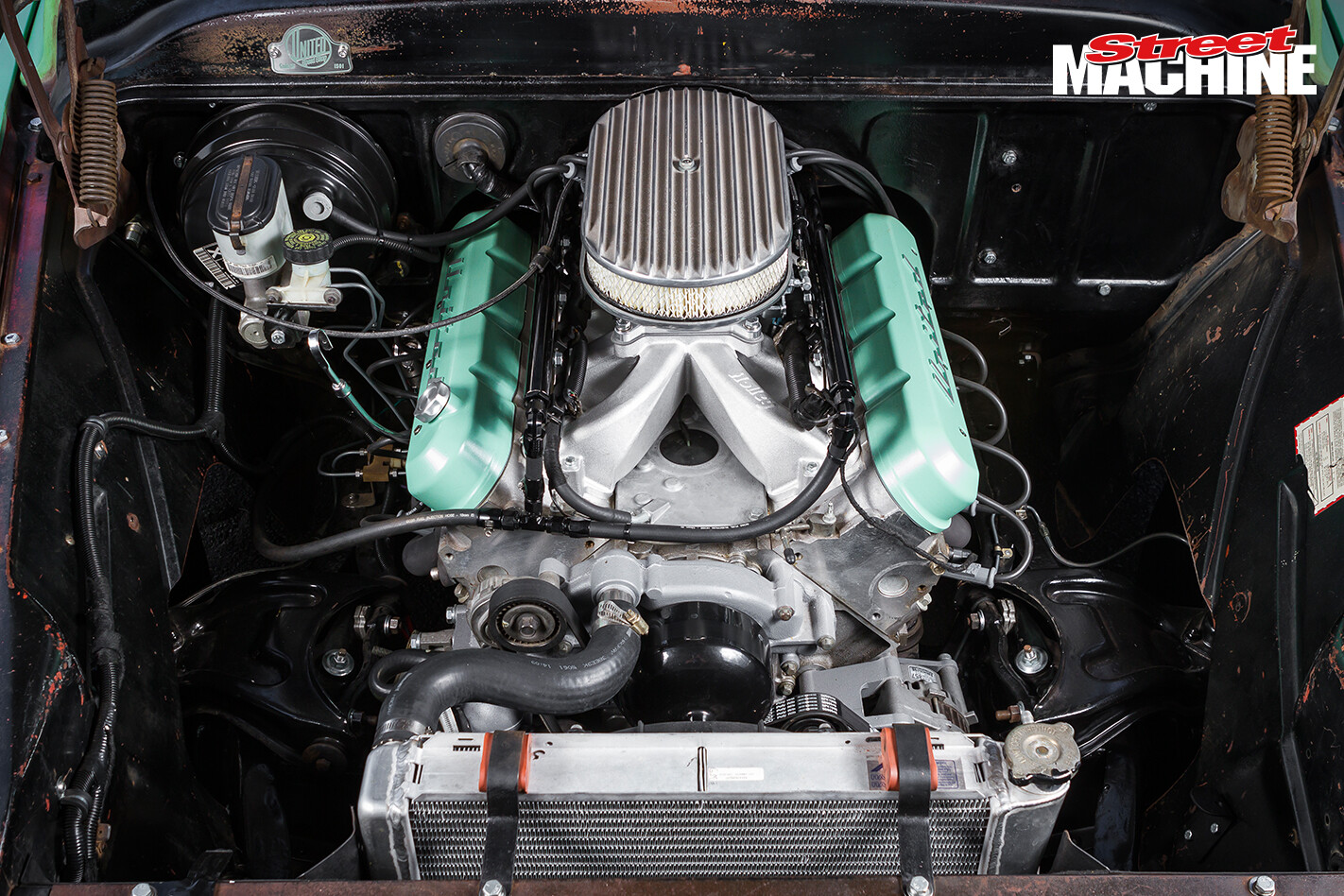 Zac Guise modified the LS1’s wiring loom to run in the vintage pick-up, while Bassett Racing performed the flash-tune. Again, Scotty from Oxytech was called on for specialised powdercoating jobs. “Scott came through massively and I can’t thank him enough for doing the engine bay goodies and plenty more,” Ryan says. 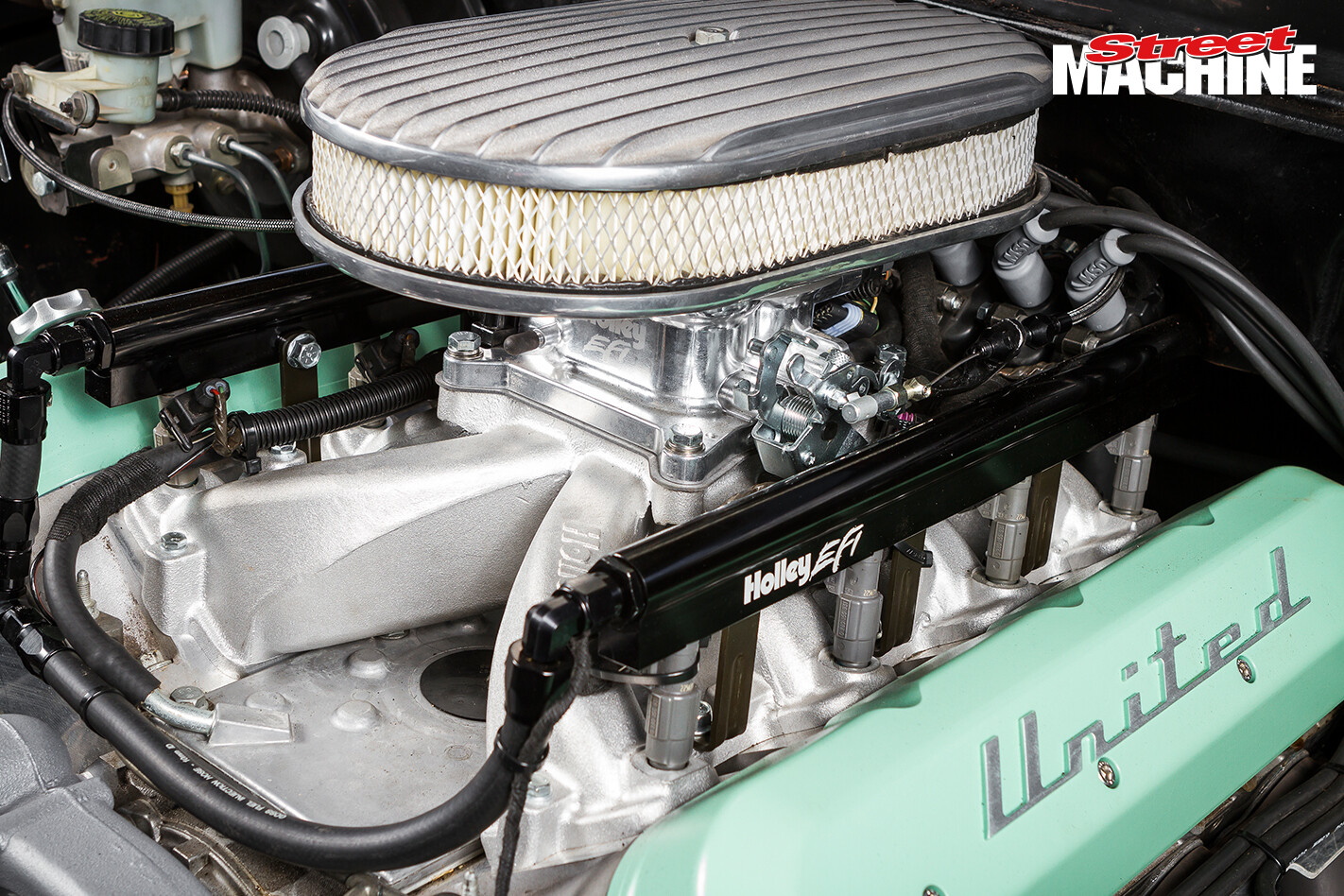 Those goodies include a set of custom billet vintage-look rocker covers that Ryan CAD-designed in-house and had Chubby from Lowe Fabrications make up, before Scotty coated them in the same Cootamundra mint green that Eric had sprayed on the pick-up’s shell. The finned covers and carby-style intake may seem old-school, but they’re hiding Holley multi-port injection, which Ryan added as a red herring to the car’s modern heart. 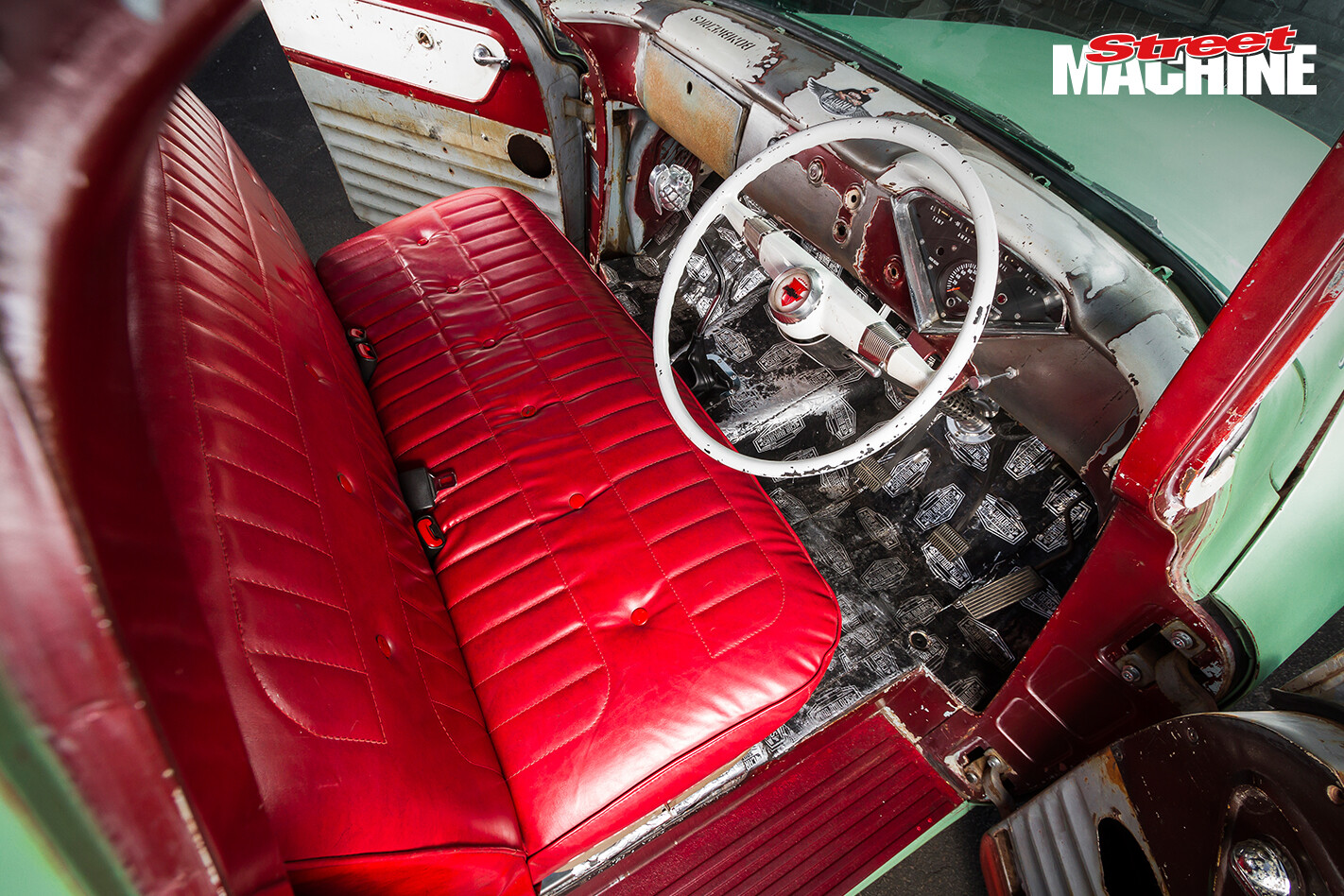 While the build on Les’s truck took a scant 12 months, Ryan’s minty 3100 was a mad thrash. “We built the majority of my truck over a pretty intense three-month period, but we actually had a pretty easy time with Les’s,” he says. Both are now engineered and fully fit for the road, and Les even gets to enjoy air con in his! 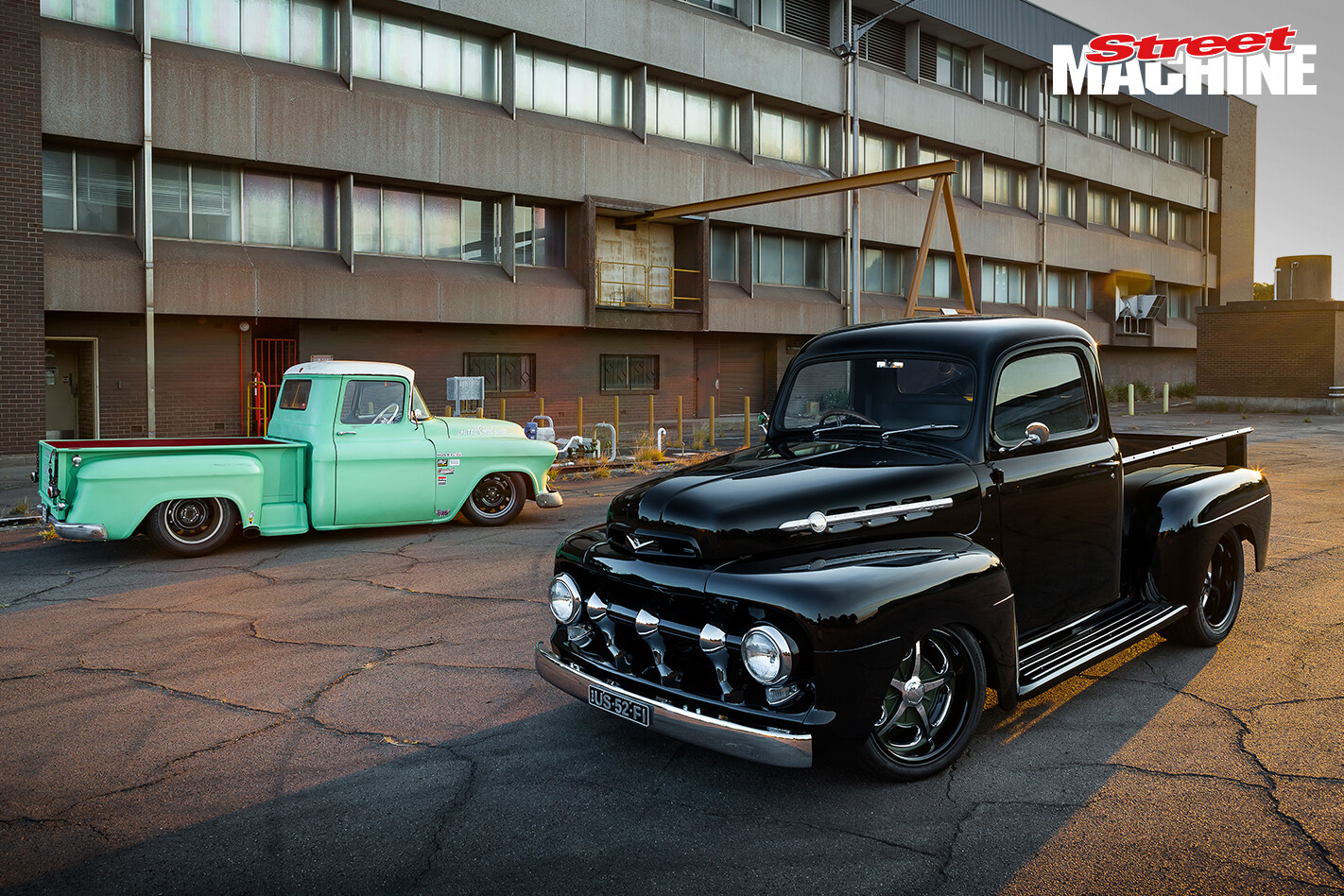 As for Ryan, there’s no rest for the wicked. “I’d love to have three weeks off in Thailand, but the shop is chockers with other builds we need to get done. The ’55 is going to earn its keep right from the start!”