Similarly, Barris bodyman Bill Ortega treated his 1941 Mercury to a severe chop, relocated fuel filler, smoothed nose and deck, and full fadeaway fenders down either side. 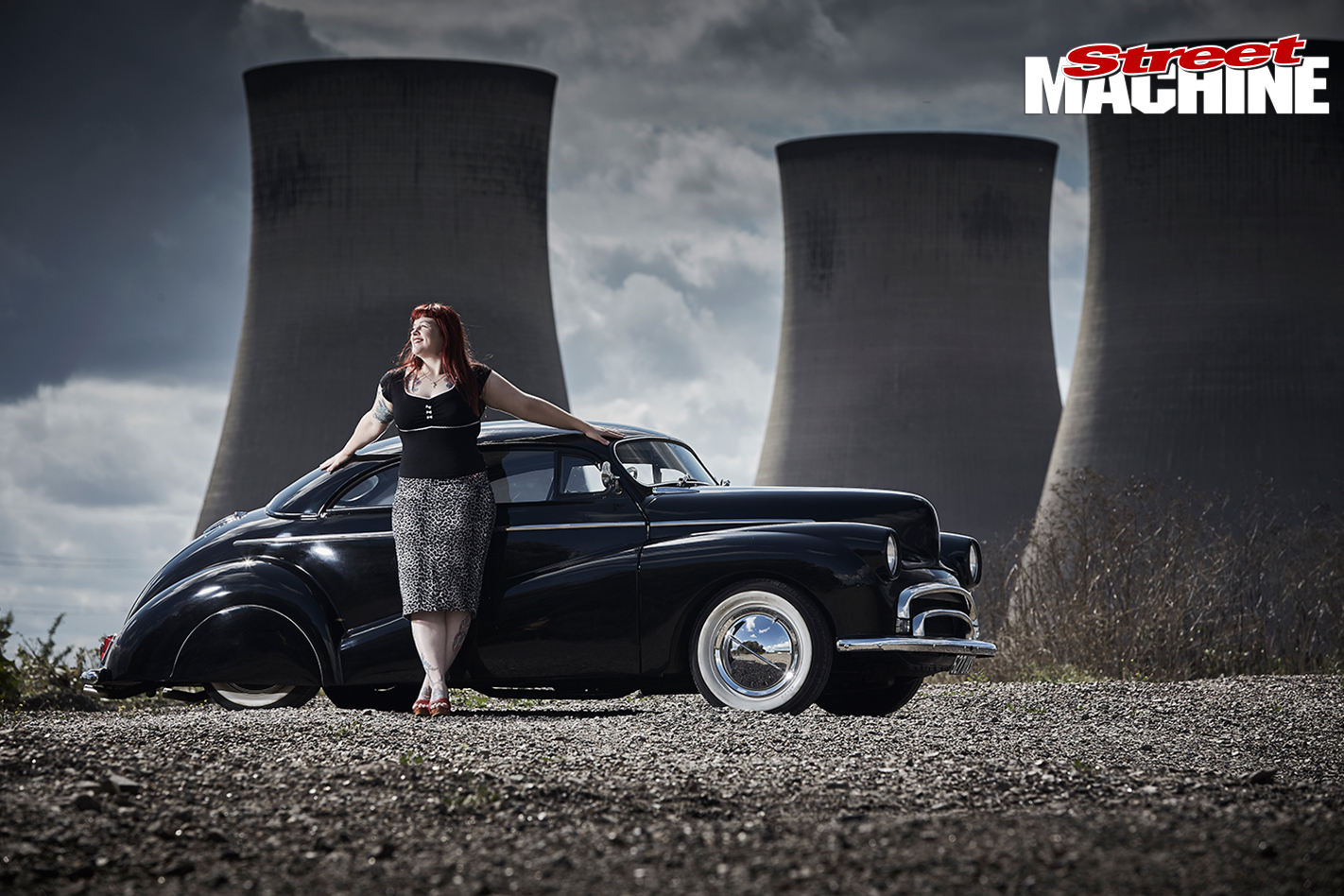 Sixty-five years and 5390 miles away, Sally and John Phillips have painstakingly applied the most awesome traits of these early Californian game-changers to their humble ’63 Morris Minor, creating a masterpiece in the process. 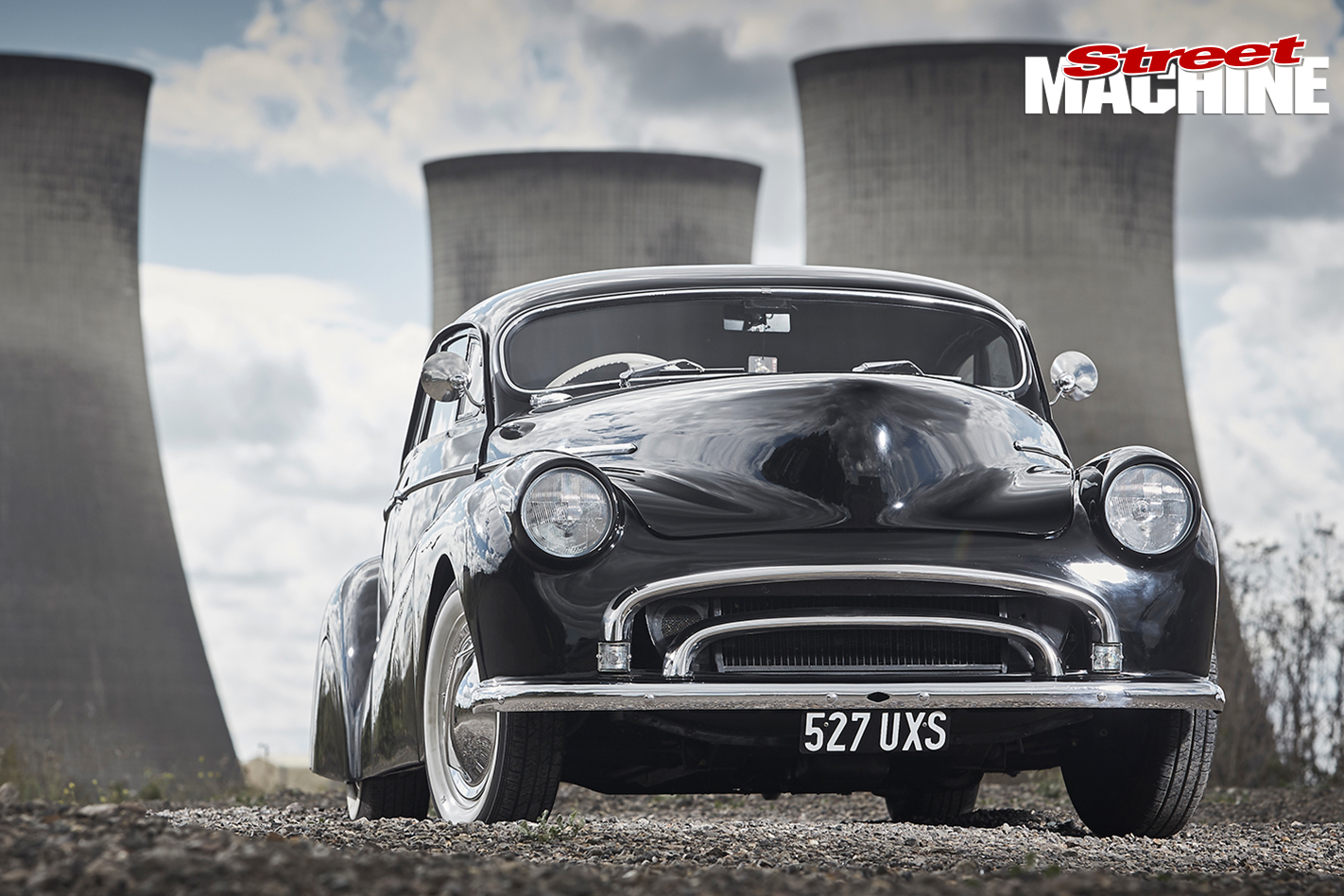 The Morris oozes style. The bonnet was reshaped and rounded and the grille is modified from a Morris Oxford that retains the neat integrated blinkers

Having toiled away together in their windswept carport in darkest Oxfordshire for the past two-and-a-half years, the pair’s efforts were rewarded in April 2015 when Sally inadvertently debuted the car to the entire world; her Morris Minor had gone Grumpy Cat-levels of viral overnight! And Street Machine was taking notice: “Telf saw it and messaged me within a day,” Sally says. “He said he didn’t normally get excited by Morris Minors, but he loves mine!” 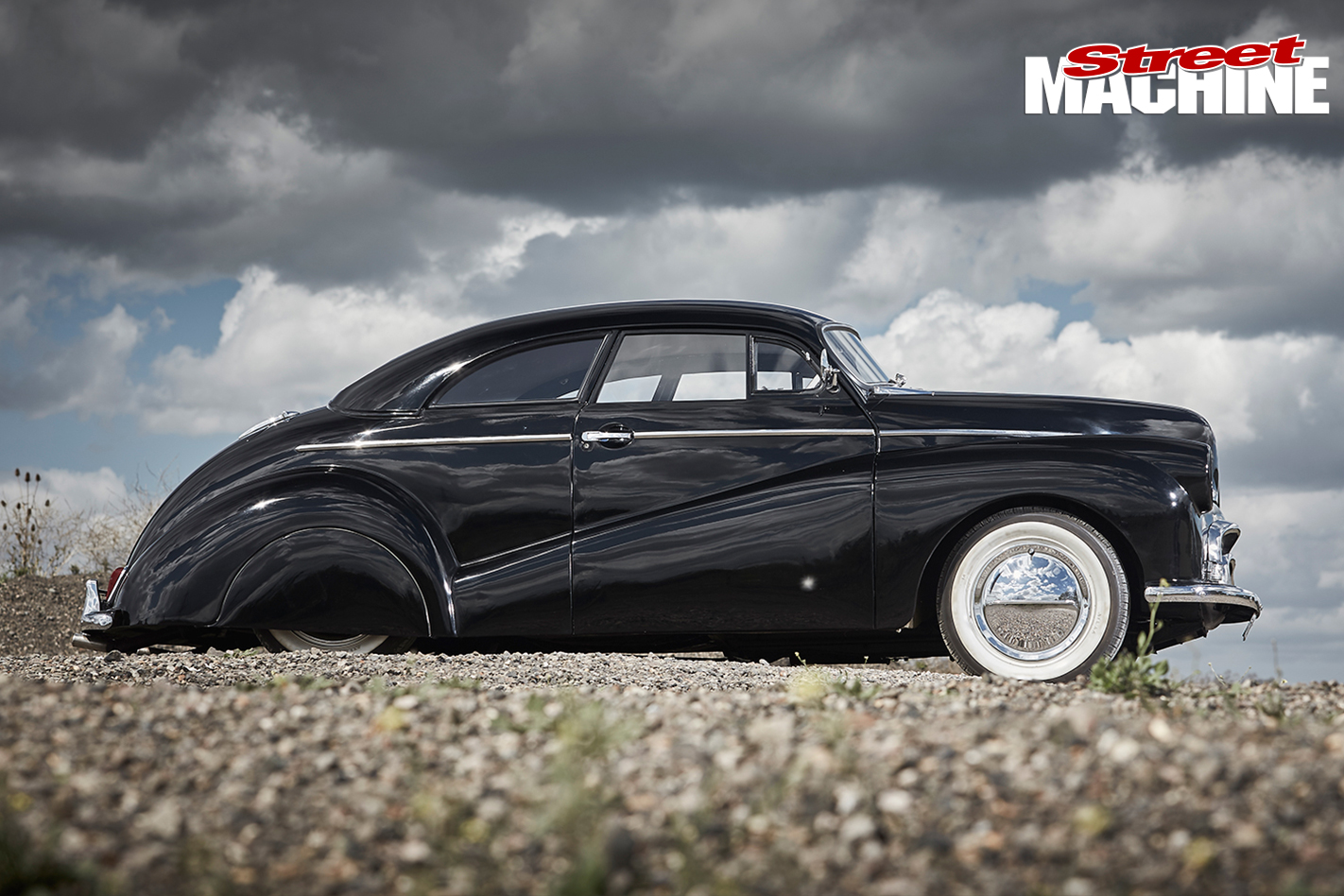 And there’s plenty to love; despite diminutive proportions, the Morris oozes a style far removed from the austerity intended by designer Alec Issigonis. Influences and aspects from the best customs throughout history have been seamlessly melded and resized, but Sally is quick to give credit where it’s due: “The shape is all John; he’s just got an eye for it!” 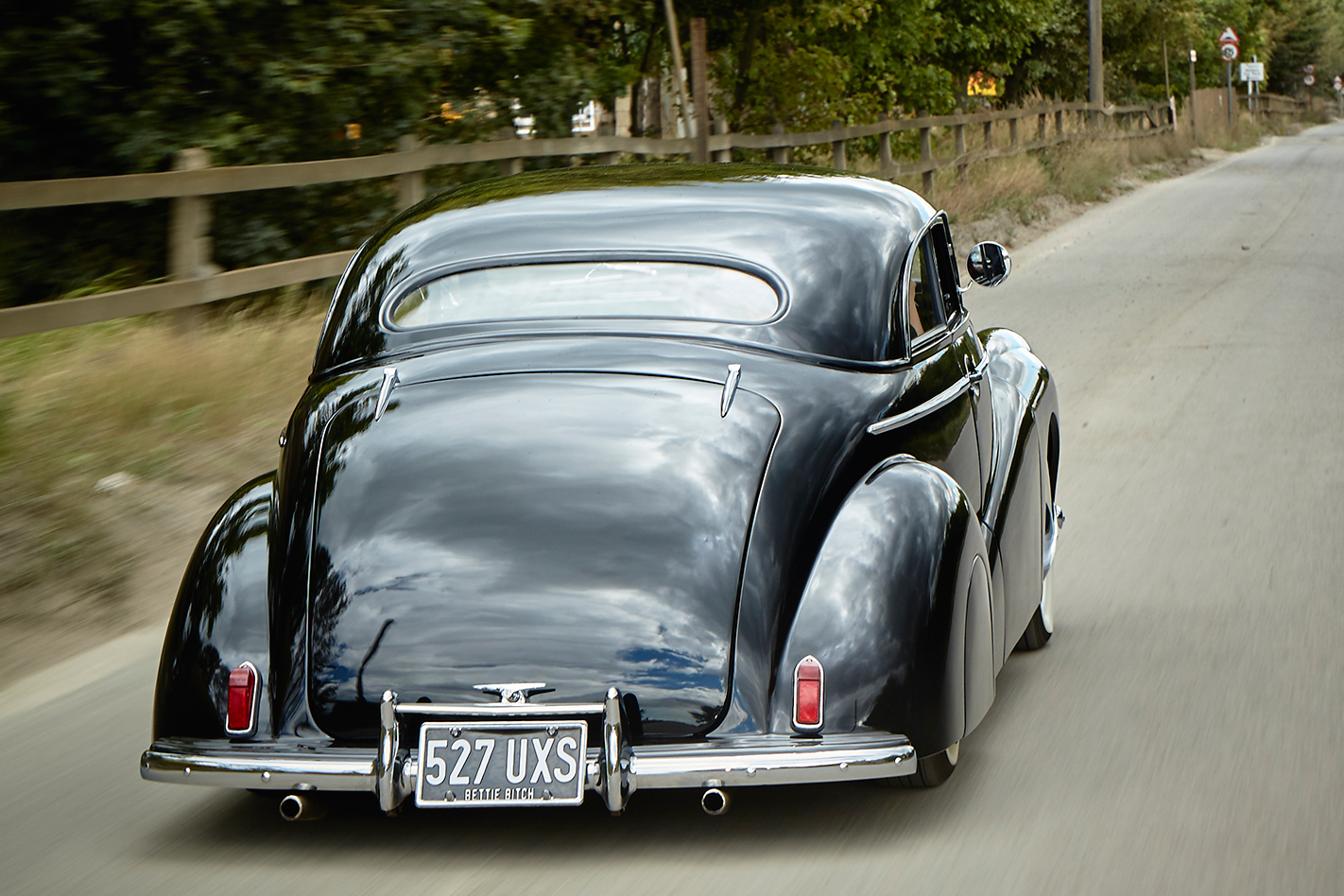 The rear skirts were lengthened and the tail-lights replaced by E-Type Jaguar side marker lights. The US-style relocated number plate sits in a customised mount

Not that Sally needs to justify her own input; she was deeply involved in the build and has worshipped classic tin since day dot. “I’ve always loved cars and owned another Morris before this one, but it was rotten from the middle down.” Things came to a head for that Morris when an MOT inspector bashed his screwdriver right through a chassis rail. “We found grey putty, chicken wire and old newspapers!” Sally remembers. 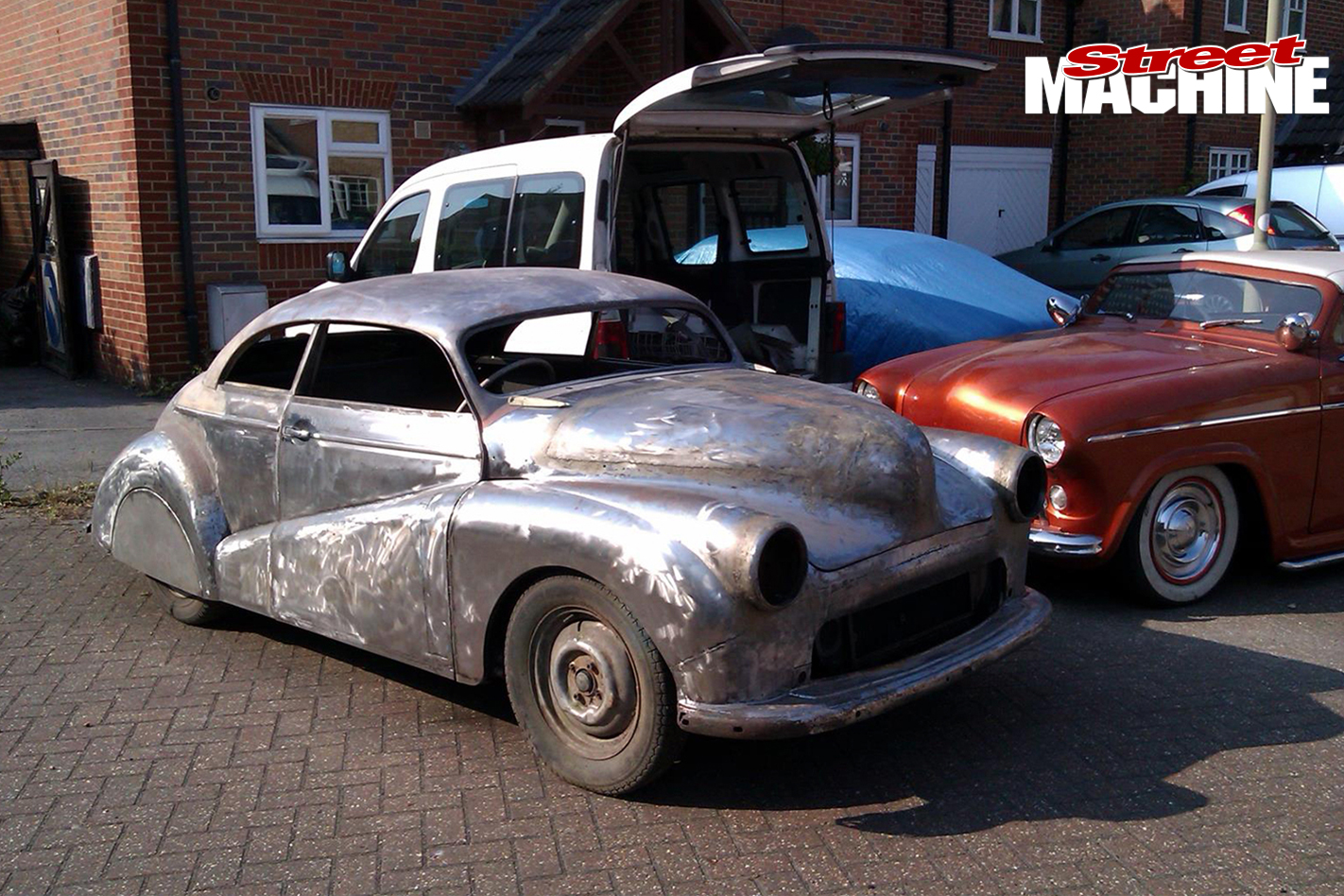 Sally and John sourced another Minor shell via mate Simon Beckett. By Aussie standards it was pretty far gone: a birdbath for a roof and no hanging panels, engine, doors or floors. “But it was solid in the rails; it hadn’t been messed around with and the datum points were intact, so we rescued it!” Sally enthuses. 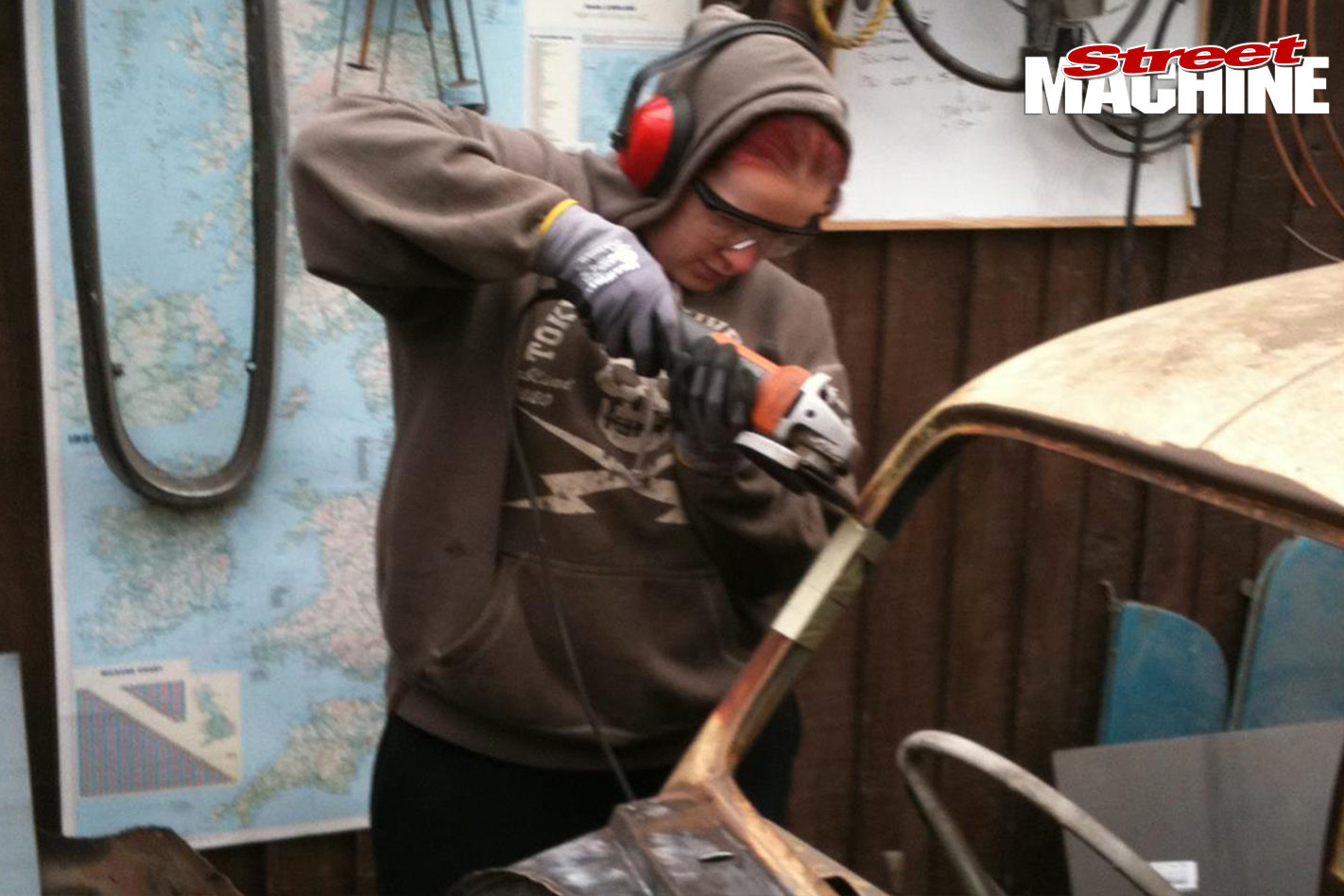 Sally did some of the hard work herself, cutting and welding, but says the more complex tasks were handled by John

“We also sectioned in the smaller rear window from an earlier Minor,” Sally explains. “I can cut and weld, but the more complex tasks were handled by John.” He also canted the B-pillars forward and re-shaped the side glass apertures in a style reflecting the famous Hirohata Mercury. 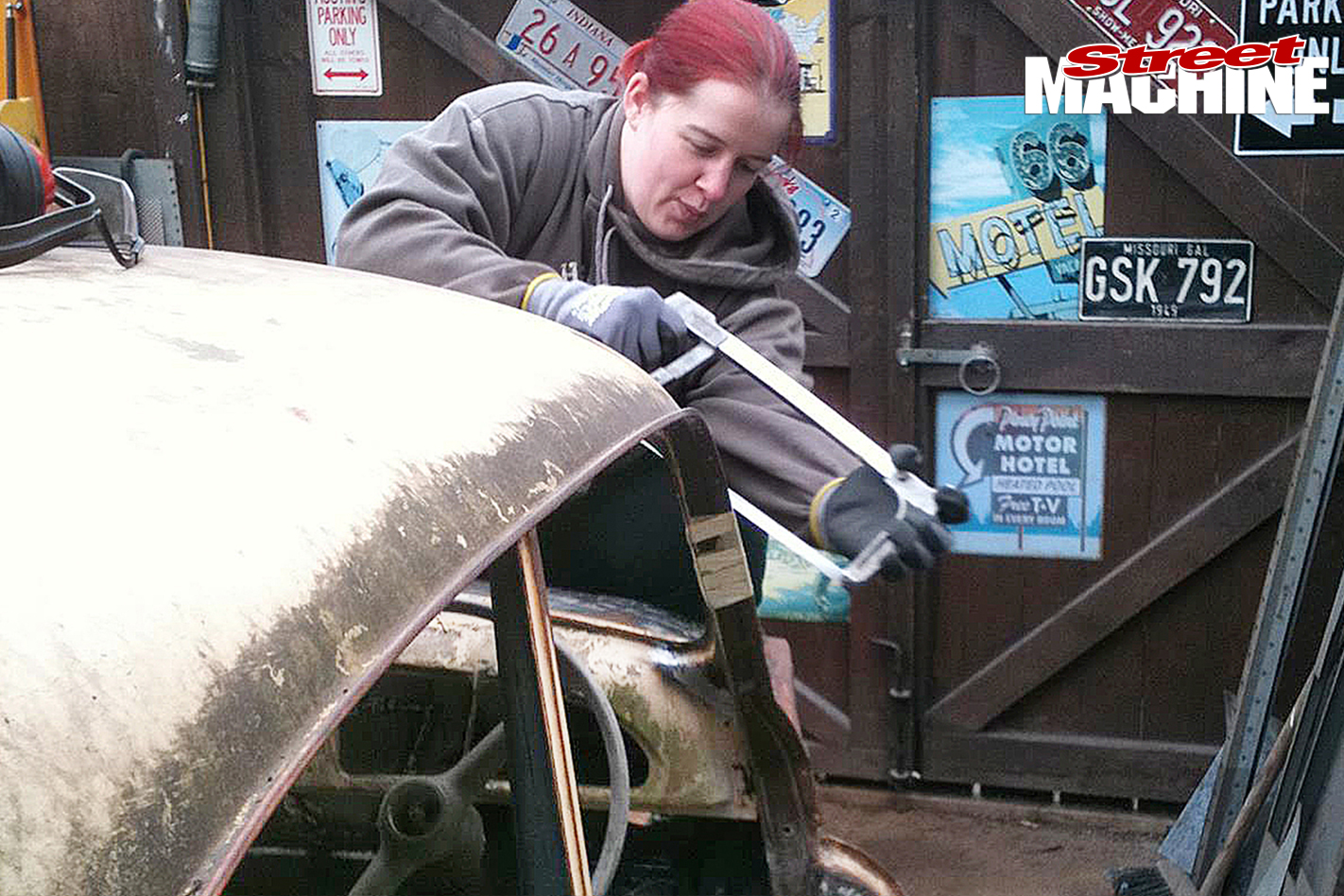 Real estate at home precluded a full rotisserie, but with the amount of rot underneath the car, Sally and John really needed one. After some careful planning, mates Kookie Cooke and Ollie Pratlett were lured to the carport to help John out. Several beers and a bacon sandwich later, they “just gave it the old heave-ho and it was up, leaning on a pile of tyres”, according to Sally.

With John beavering away on the floor sections, Sally frenched in a pair of MG Midget headlight surrounds. 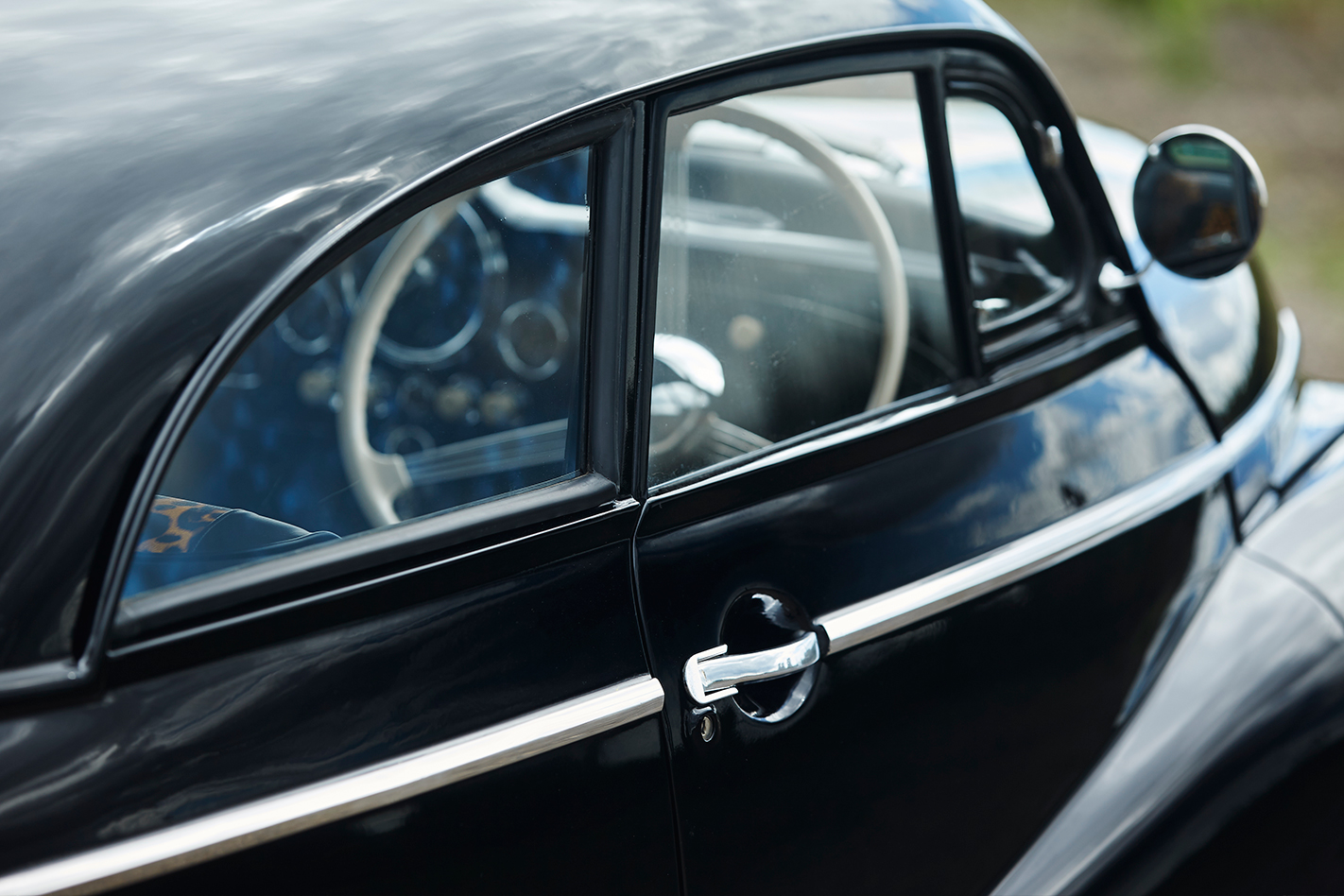 But something was amiss. Sally started to feel some weird effects – touch sensation issues, double vision and numbness down her left side. Then, while she was awaiting the results of an MRI, Sally awoke to find half her face had dropped as if she’d had a stroke; the life-changing diagnosis was multiple sclerosis. “John was devastated by the news, but when he’s upset he just throws himself at cars,” Sally says philosophically. “But I had to put my bits on hold.”

Although there’s no cure for MS, a definite diagnosis meant treatment could commence. While Sally was offline, John finished the bodywork, stretching the doors and quarters south, nosing the bonnet, decking the bootlid and creating the amazing fadeaways by bending the new sheet metal around the light pole in front of their house! 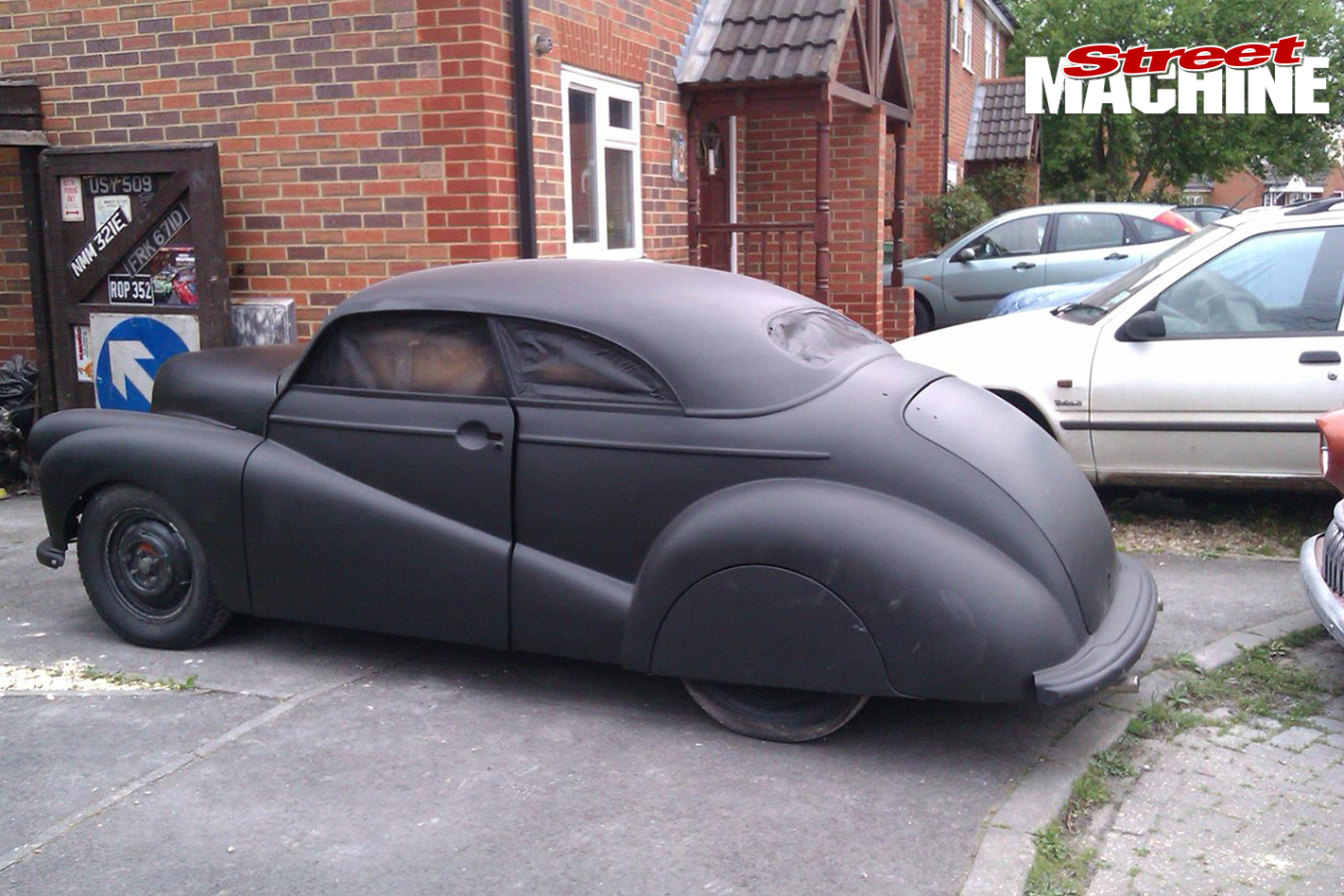 With a bit of creative engineering, Sally and John bent steel around the street light post to make the custom fadeaways

Within a few months, Sally’s medications were keeping her symptoms at a manageable level and they could get stuck back into the Morris together. Nick Farrance had painted the car, so all that was left was careful re-assembly. Sally fitted the door cards, glass and chrome fixings. “Some of the smallest stuff was the trickiest,” she says. “The quarter lights were a nightmare!” 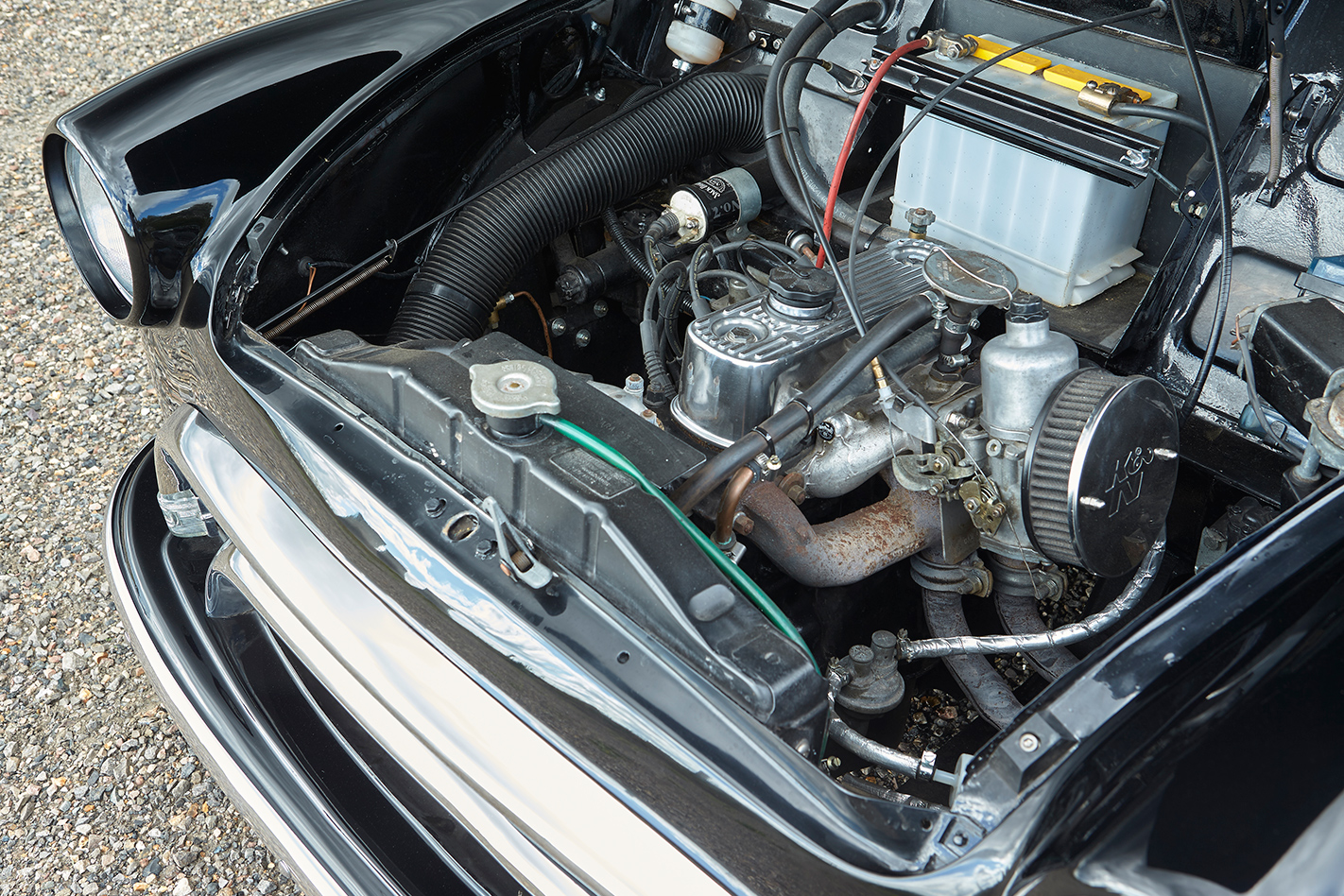 The freshened-up 1275cc MG Midget engine with some extra bits added may not be the fastest thing around, but it's good for 40mpg

With John a mechanic by trade, motivation was easily sorted; a 1275cc MG Midget engine was given a freshen-up with some good bits including MG Metro inlet and exhaust manifolds and an HIF44 SU carburettor. Although not quite as exciting as a Hemi, it returns a very decent 40mpg – an important factor in England! 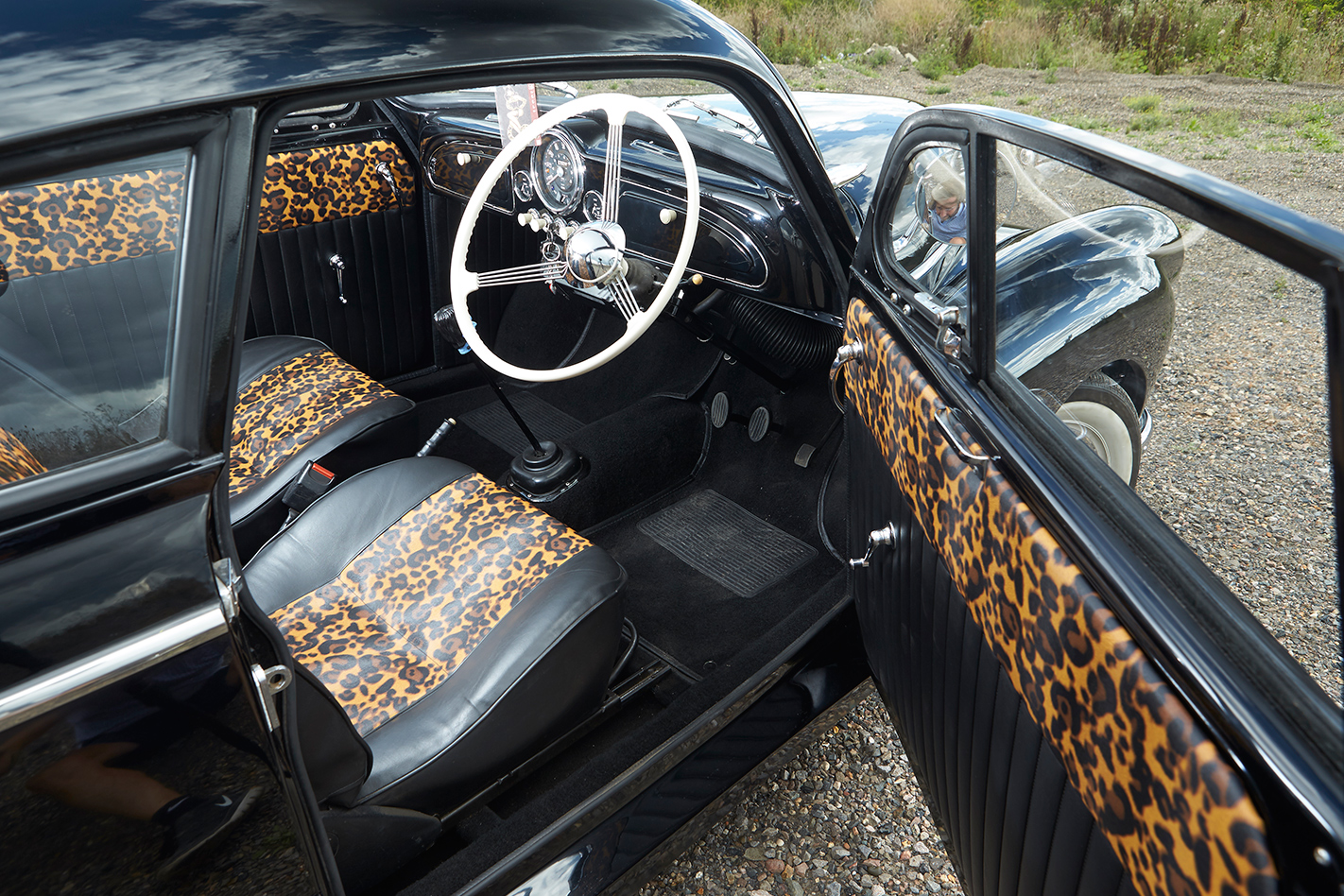 The cool steering wheel is pure Morris Minor, with an aftermarket chrome dome. Sally's love of leopard print continues with the interior trim and door cards

Vehicles like Bill Ortega’s Mercury business coupe, Marcia Campbell’s 1941 Ford and the Hirohata Merc were never famous for horsepower – they were famous for oozing style from every single panel. It’s a testament to their legacy that 60 years later, these cars are still spoken about in reverent tones and are still inspiring people like Sally and John to challenge expectations, beat the odds and put out something beautiful. 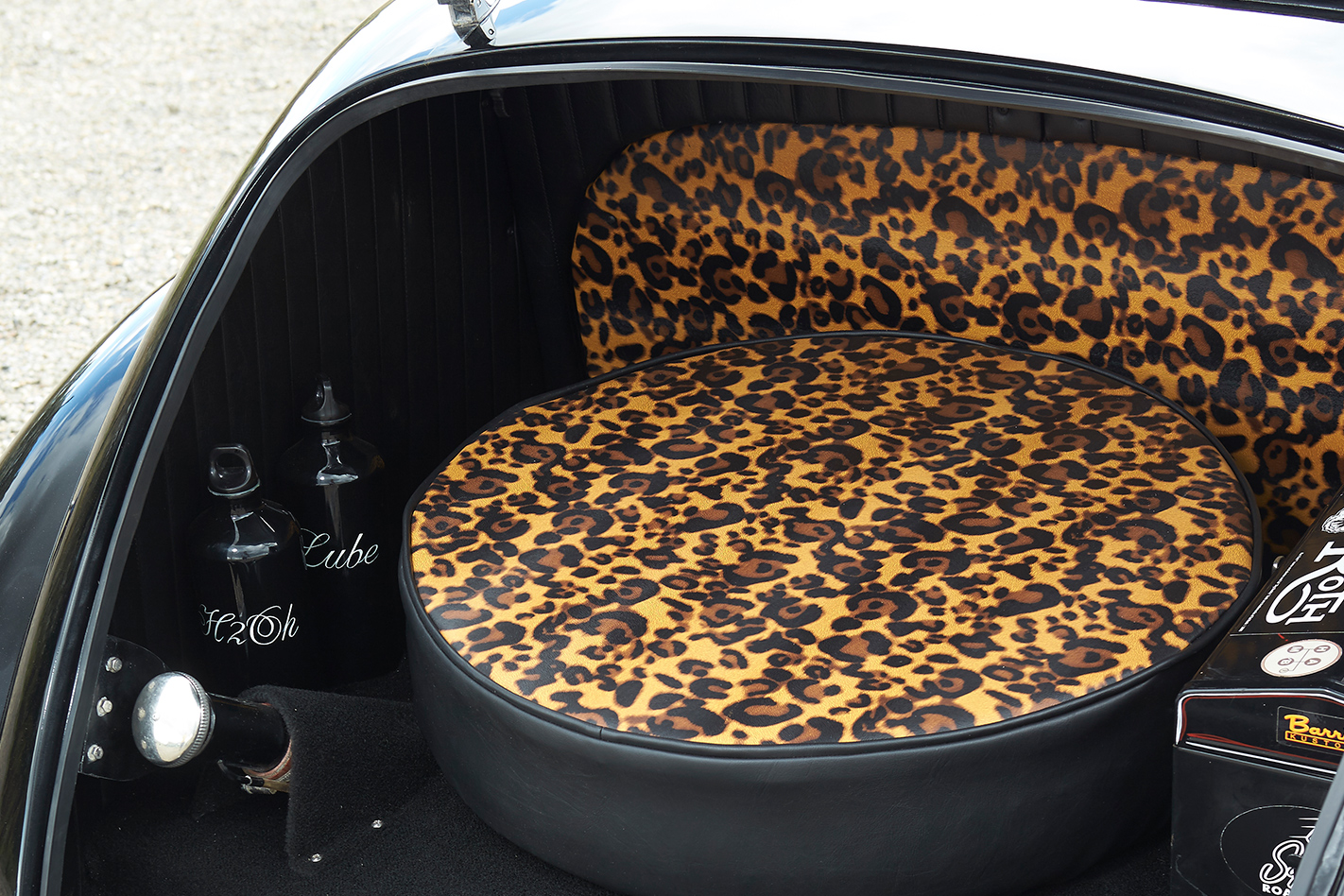 And we’re certain that, in another 60 years, people will still talk of the world’s most beautiful Morris Minor. 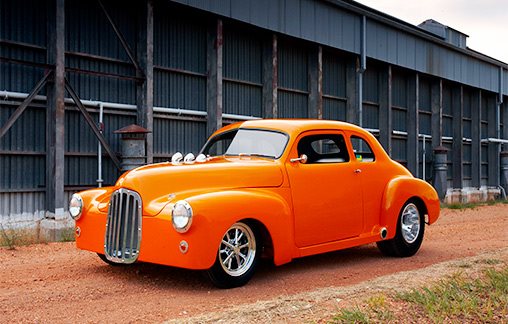 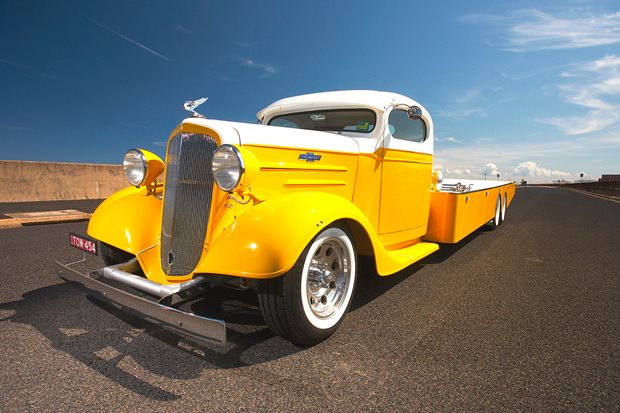 With a transporter as cool as this '36 Chev, you'd be proud to make your car a trailer queen 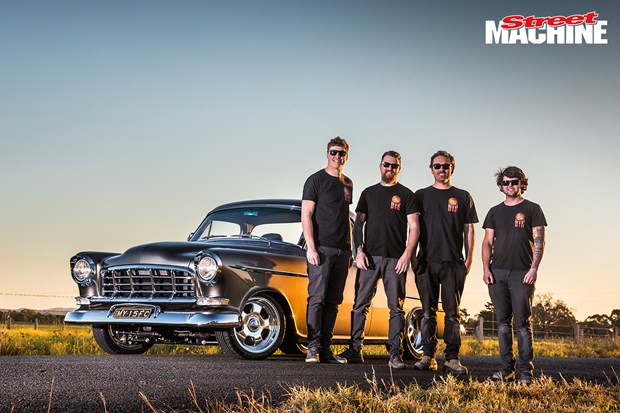 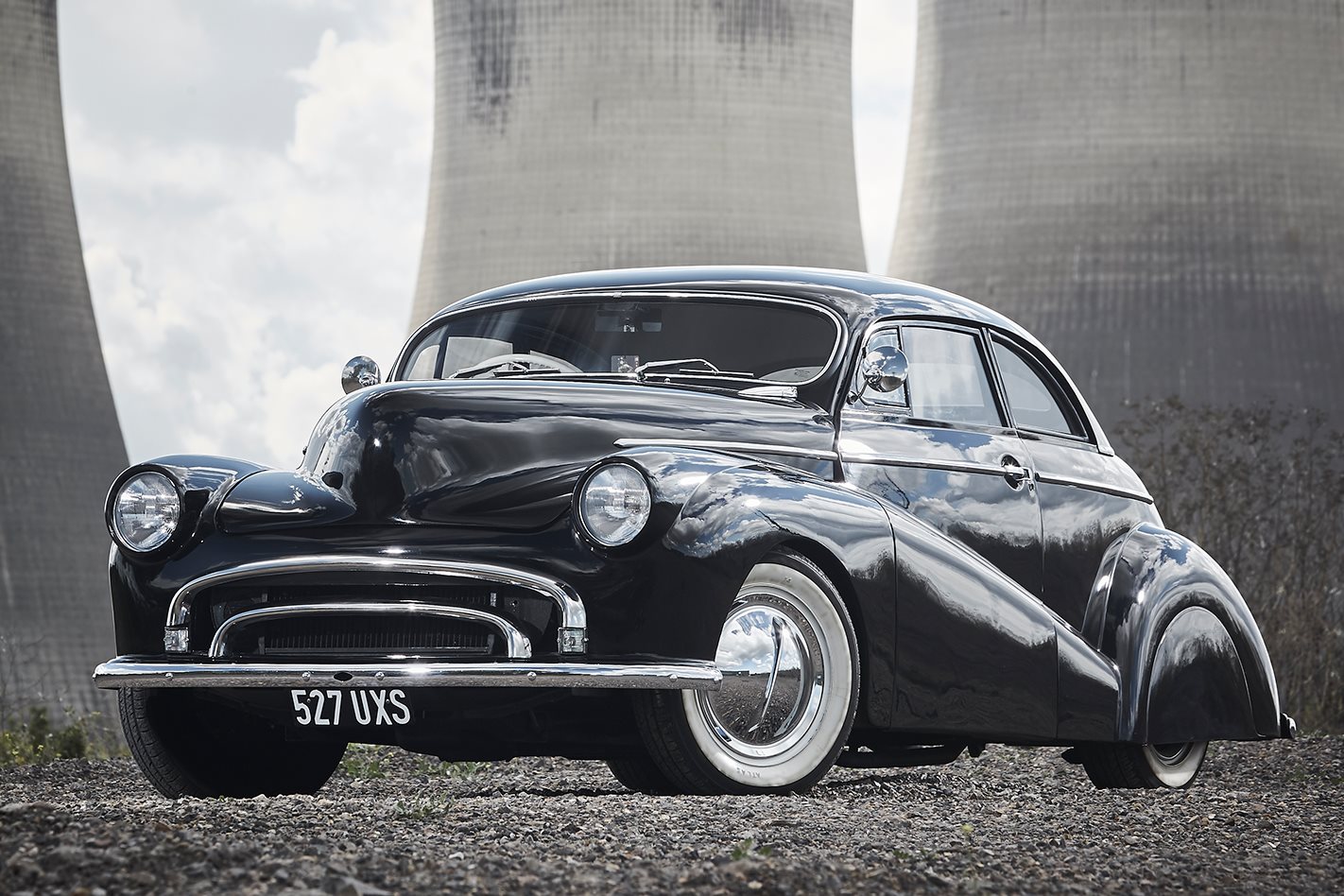 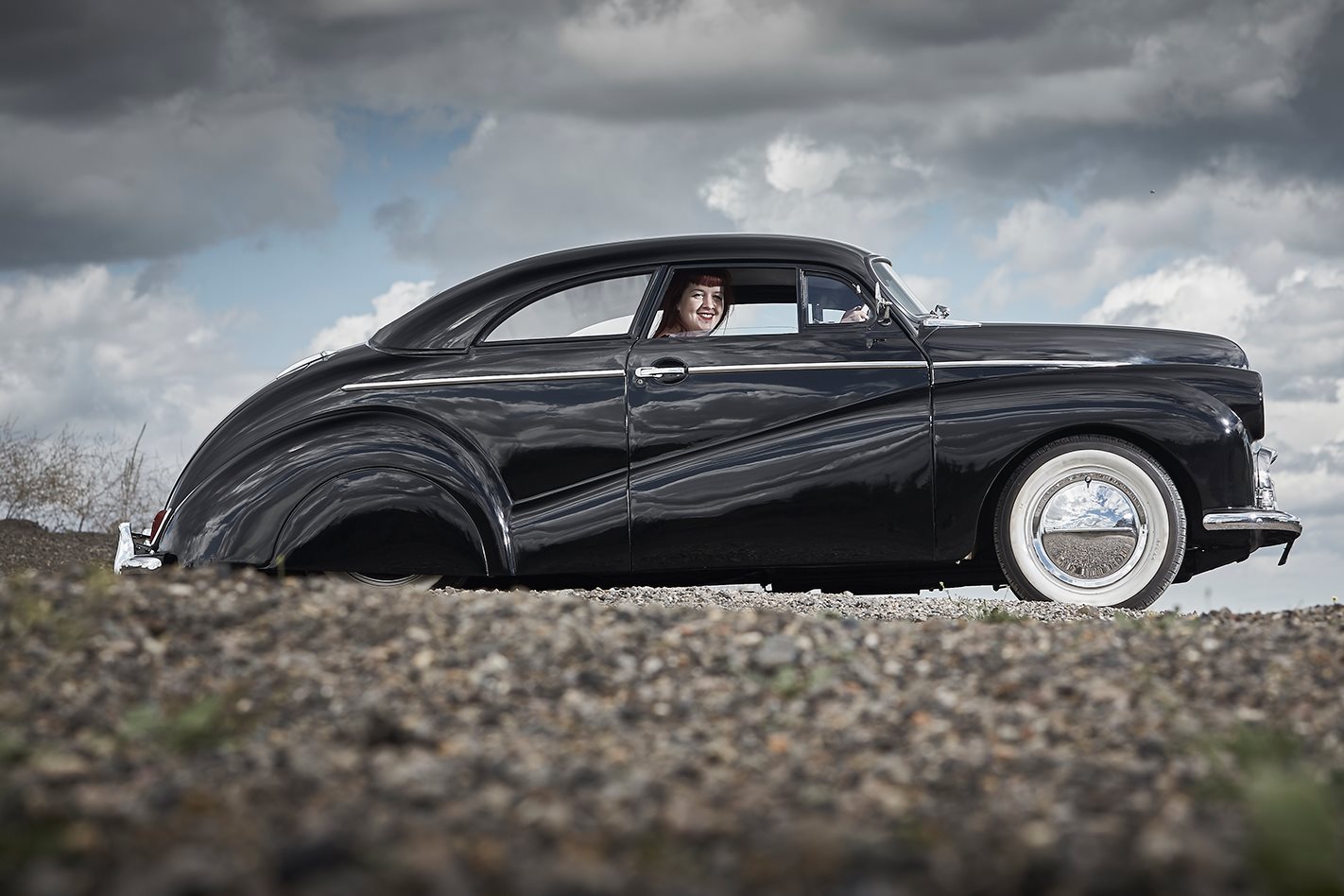 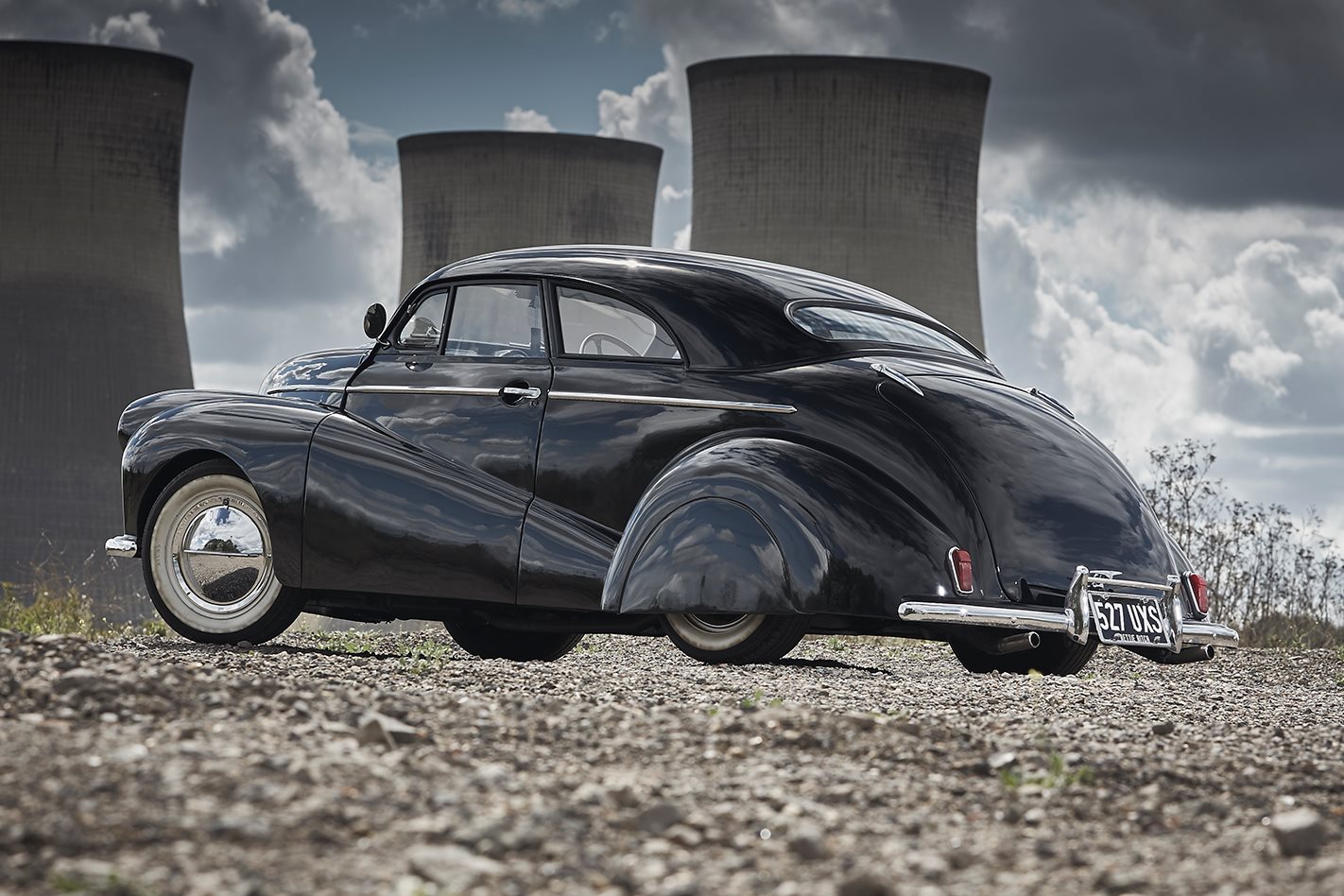 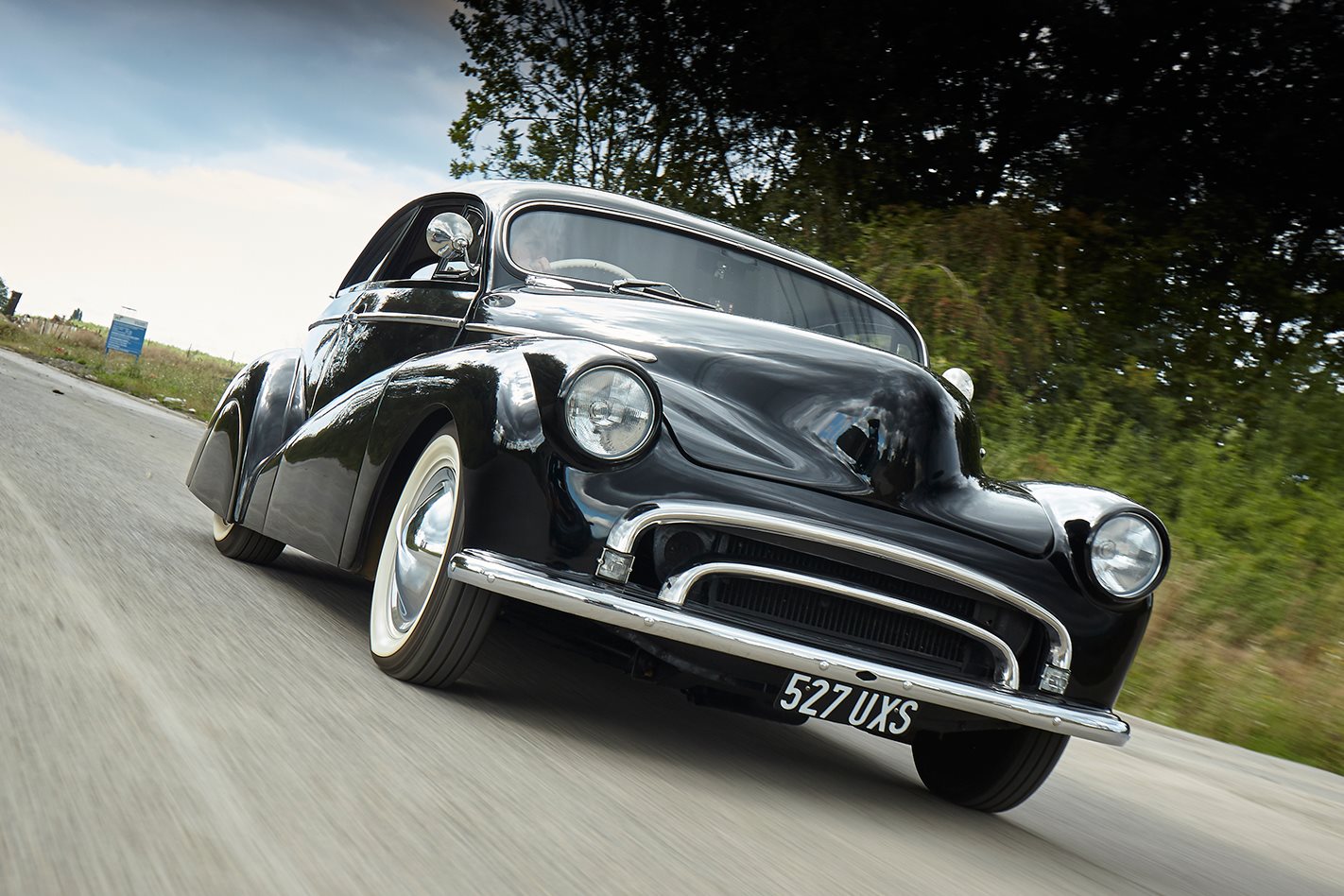 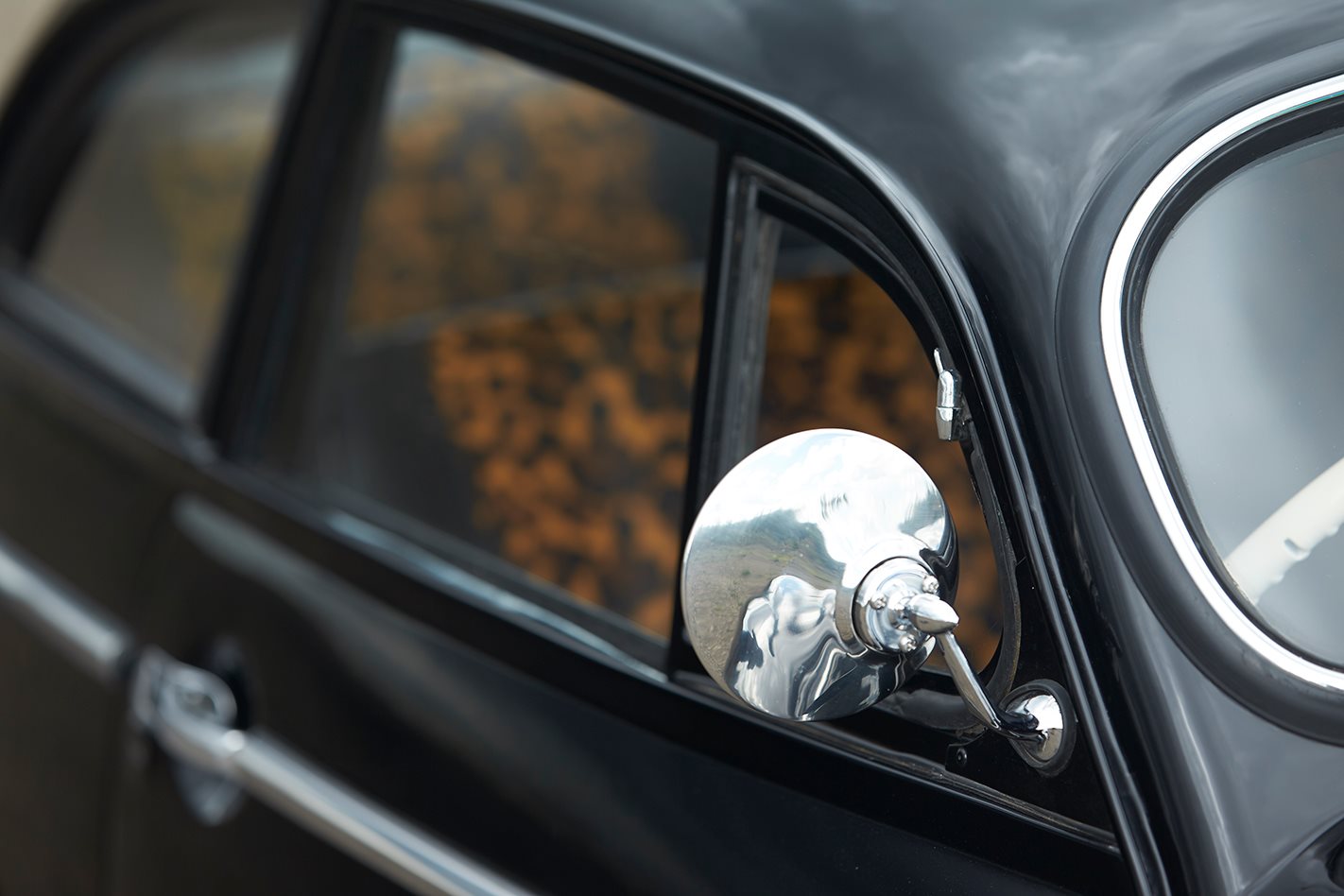 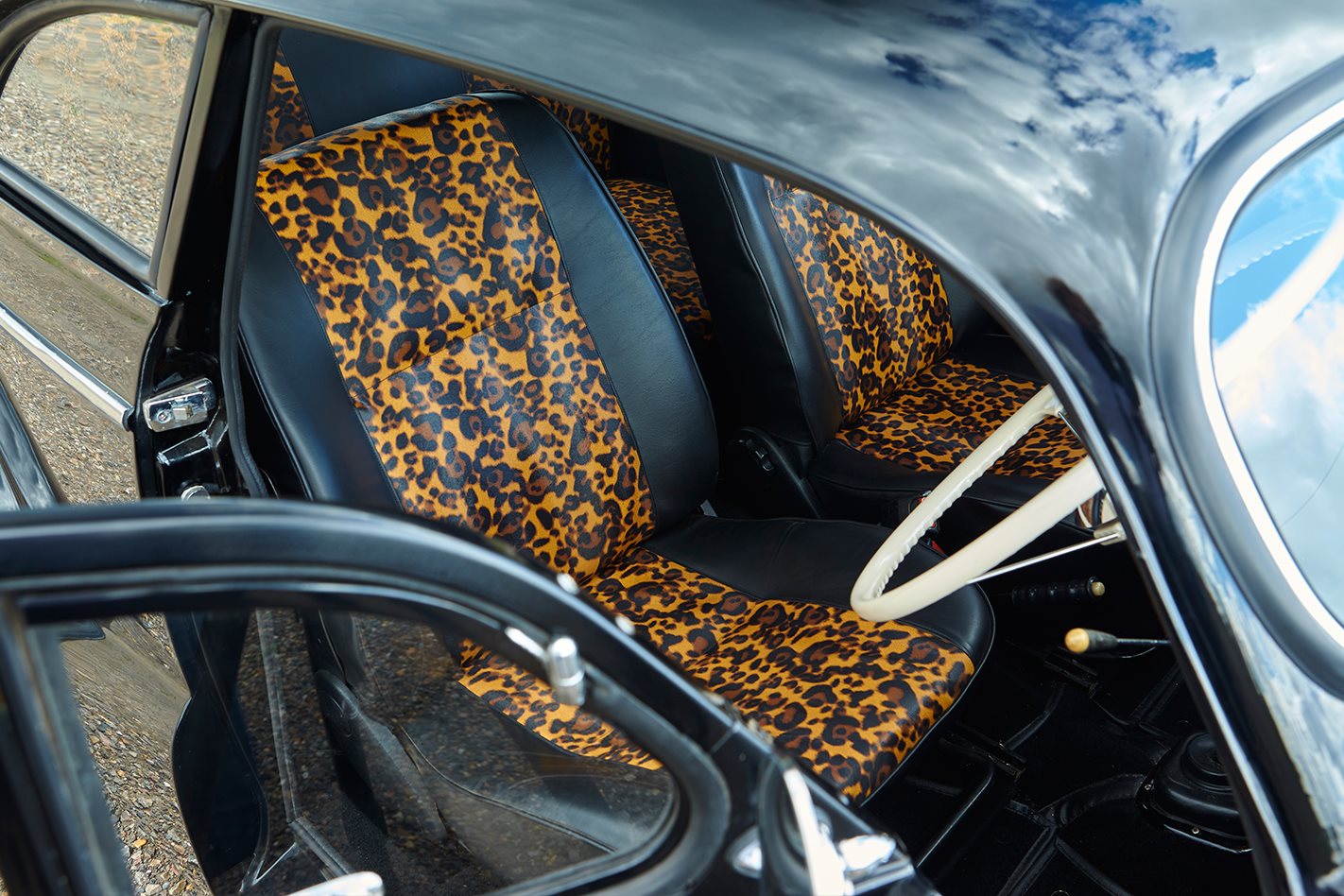 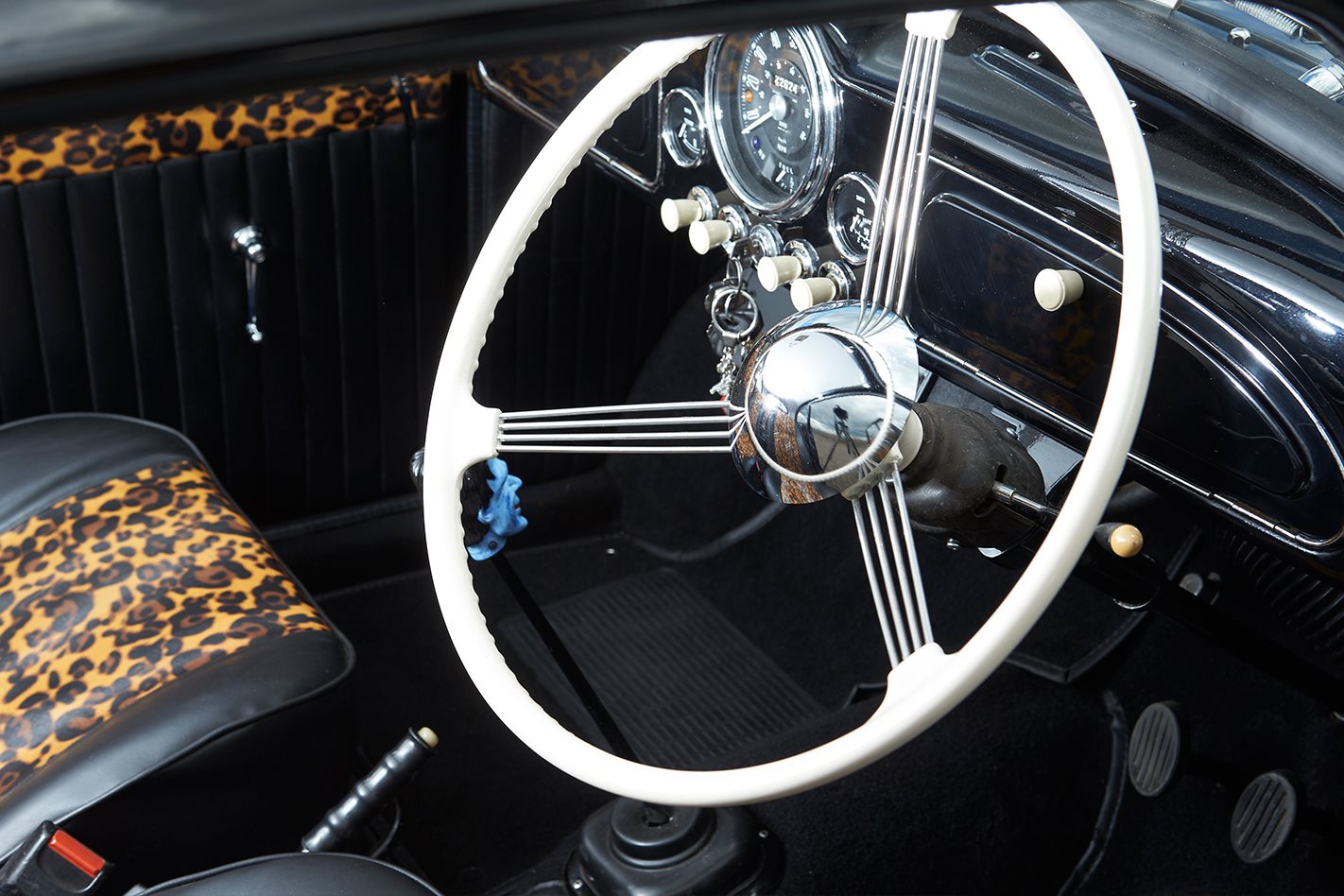 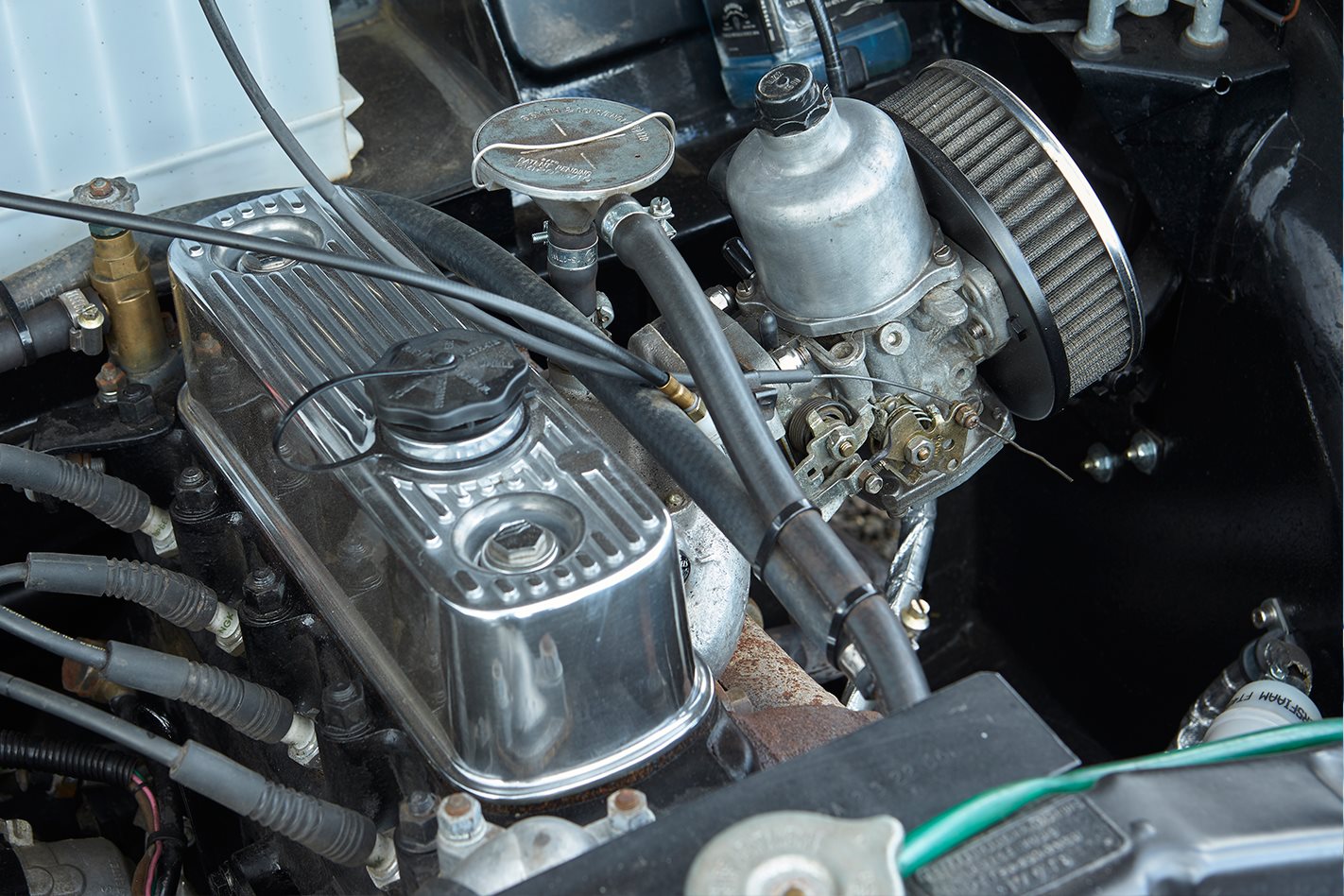 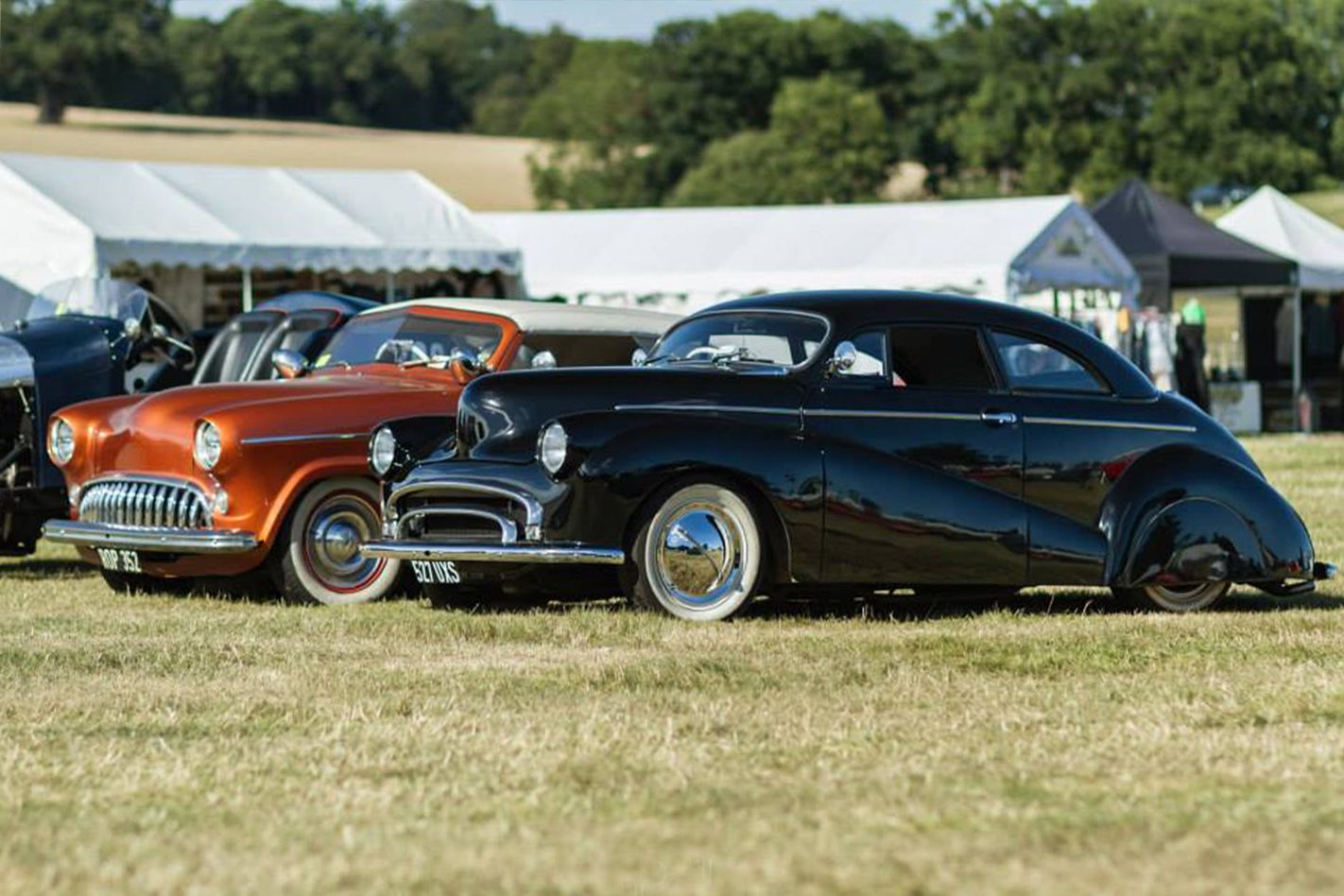