Mike Heim's 1967 Camaro has 12 cylinders and uses them all

EVEN if Mike Heim’s ’67 Camaro wasn’t powered by an Aussie-designed and built custom V12 engine, we’d probably still feature it just because of how wild it looks. Based off an LS1, the motor is the brainchild of brothers Matt and Shane Corish, a couple of Aussie blokes who love an engineering challenge and figured the market was lacking an engine that could live up to some of the wild machines people were creating. 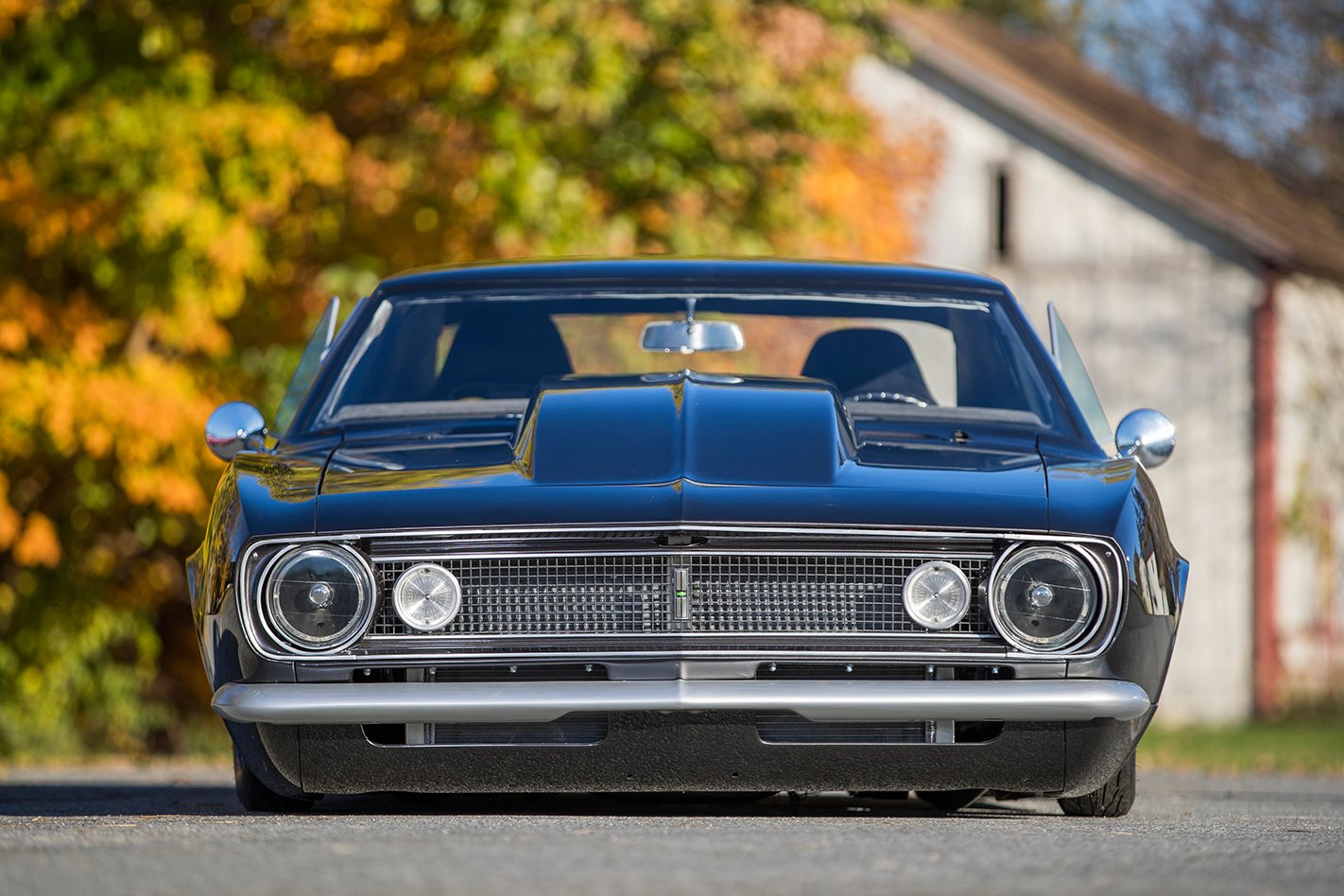 As Shane explains: “We realised there was a real gap in the market for people here in the USA modifying cars. They’re doing some really crazy shit out there now, but the engines are still crate engines. We wanted to provide an engine that was as ridiculous as the cars they would be going into!” 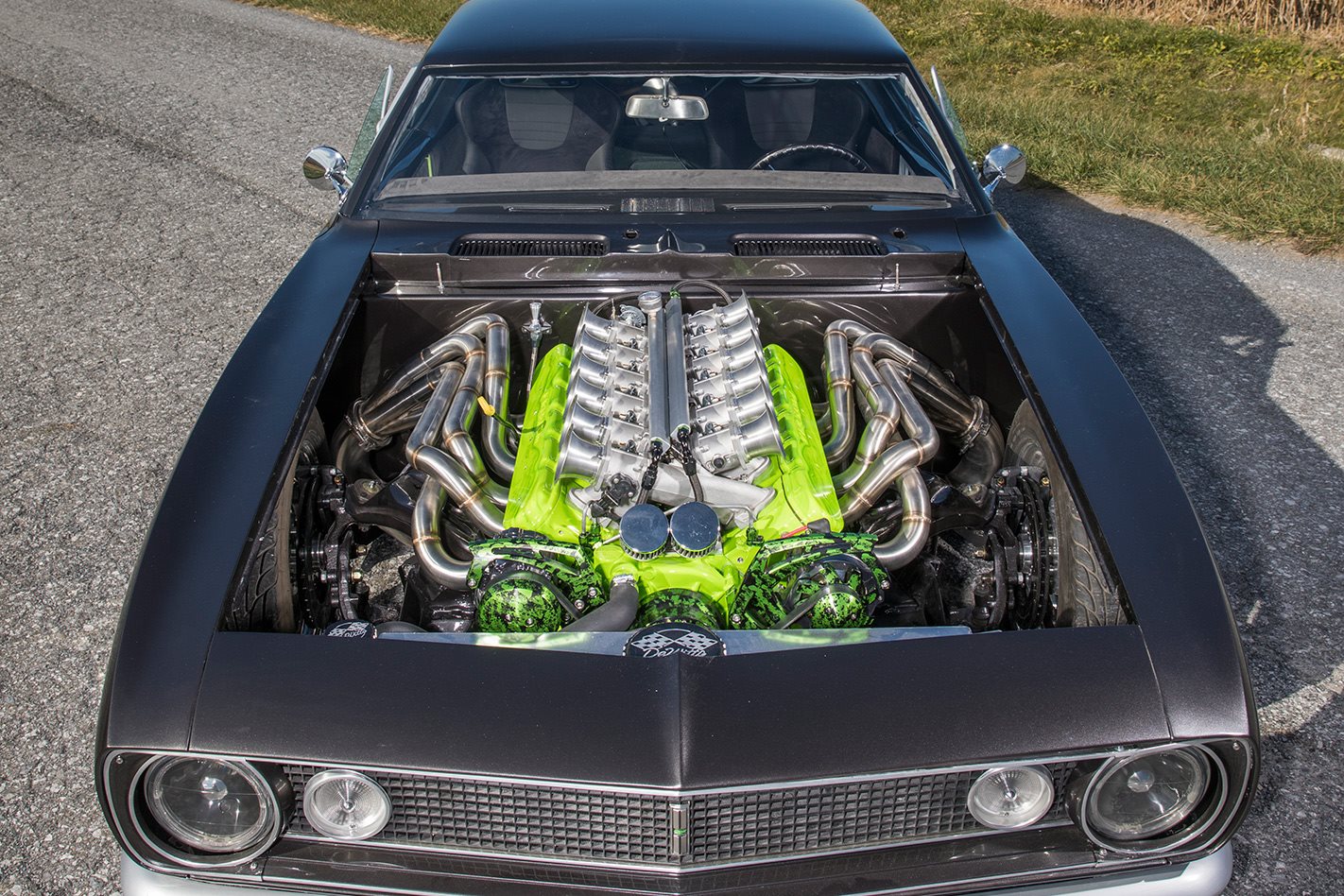 The engine has been updated with 12 individual throttlebodies, replacing the dual-quad set-up it had initially, and Mike went to a lot of effort to modify an OBX cross-ram intake to suit

With the prototype engine – made from two factory castings that were cut up and mated together – up and running and making over 700hp on the dyno with a less-than-optimal dual-quad EFI throttlebody set-up, the hunt was on for a car to put the monster donk into. That’s where Mike, who owns Quality Custom Rides in Lancaster, Pennsylvania, comes into the picture. 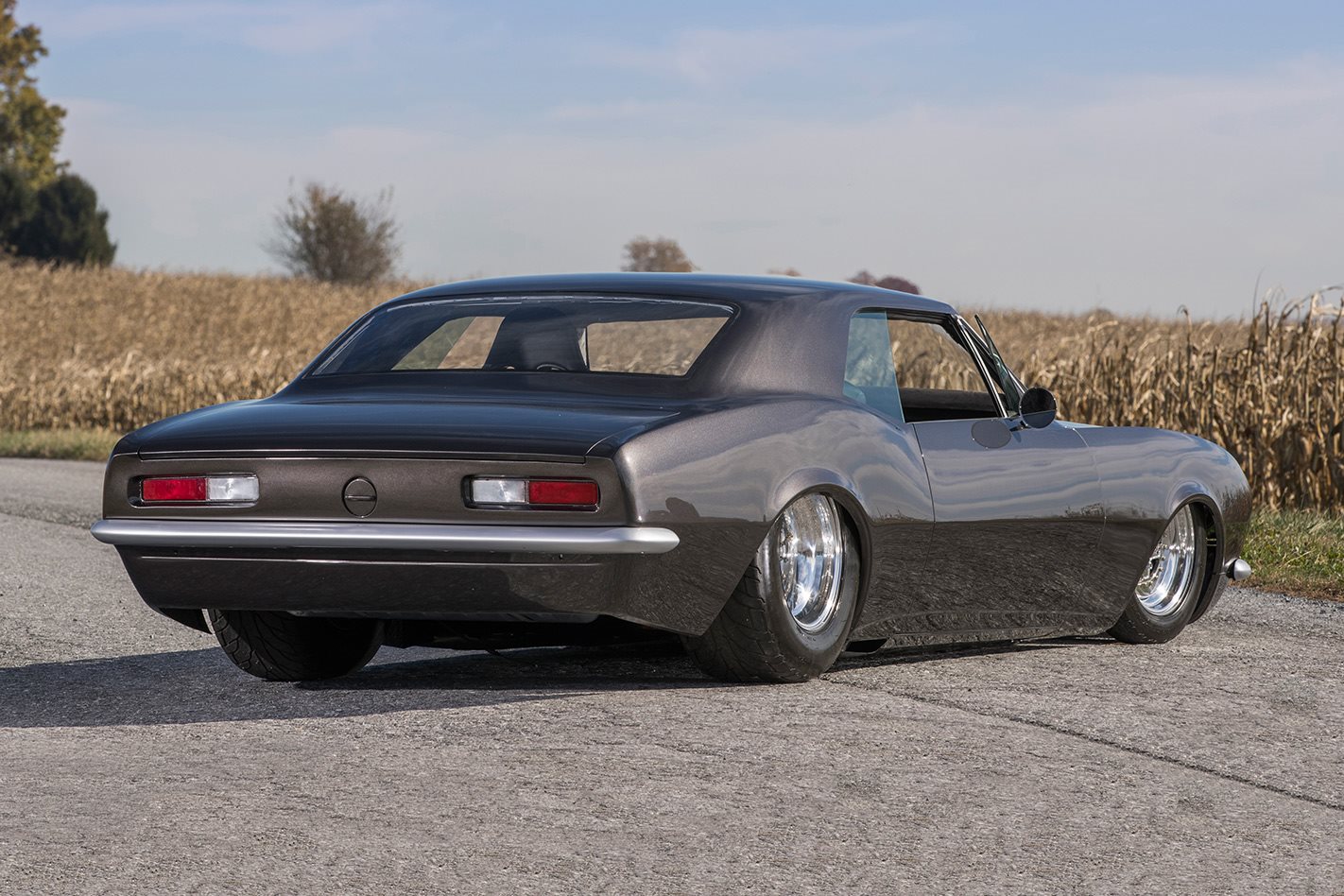 Airbags go a long way to getting this car in the weeds, but it’s also been channelled three inches, as well as having the sill panels removed to give it a sleeker and longer look, accentuated by the wedged roof chop

“We were at a show in Maryland right near where Matt Corish lives, and a friend of mine knows him real well,” Mike explains. “He brought Matt over to talk to me and he asked if we had a mule to put a motor in to test it out. The only thing we had was my Camaro, so I said: ‘Why don’t you come up and take a look at it?’ He came up and saw it and said: ‘We gotta get you a motor, can we get this to SEMA?’” Of course, Mike said yes and in a little under 12 months, the car was wowing the crowds – and us – at SEMA. 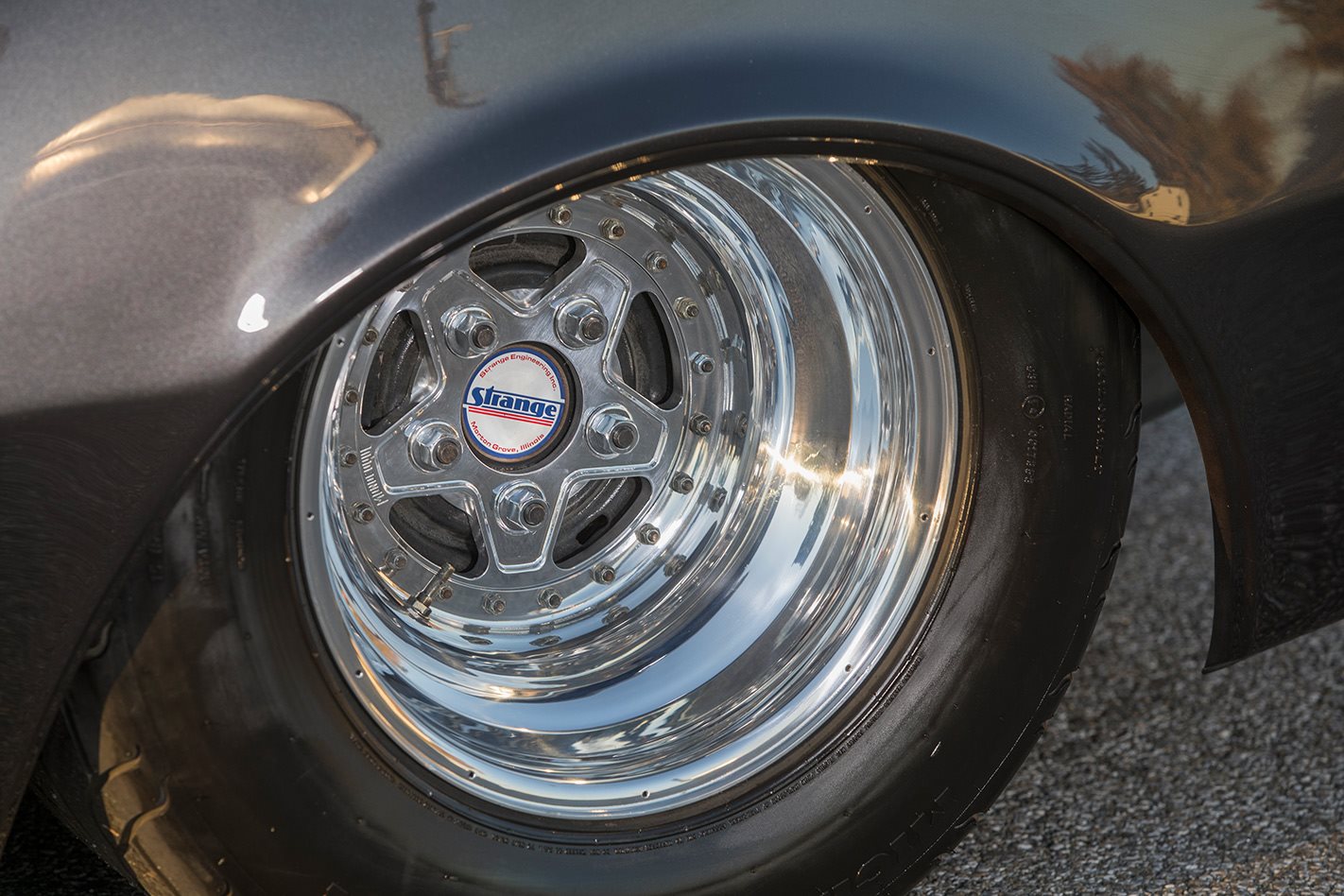 “Matt and Shane spent a lot of time here helping to get it ready, they really pulled a lot of hours,” Mike says. “We decided to do the project in December [2015], but we didn’t get the motor until much later because of the research and development they were doing, so a ton of the work was done in the last four months before SEMA.” 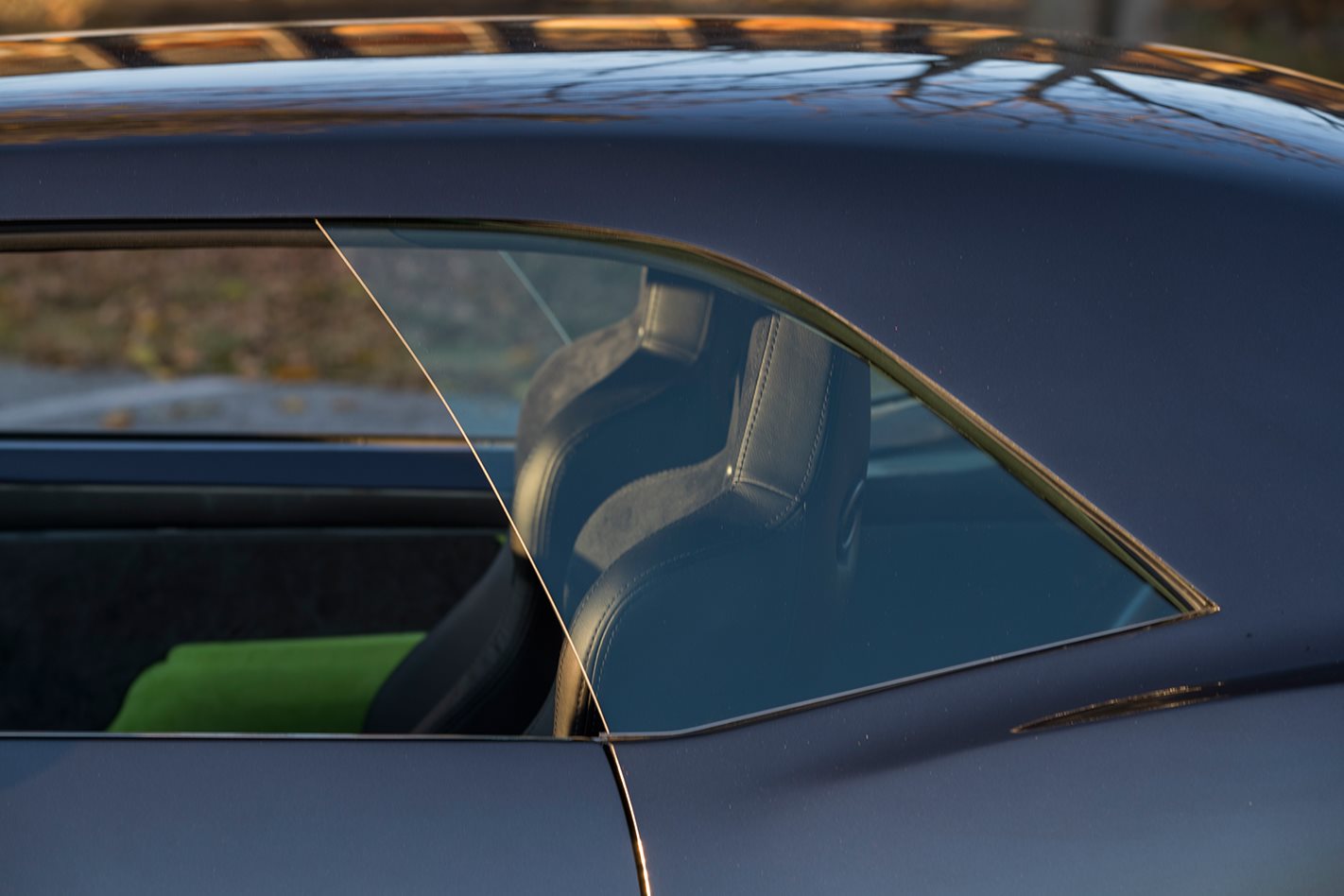 This is no ordinary Camaro, either; it’s Mike’s personal car. In fact, it was the first car he ever bought when he was 19 years old. “I drove it and raced it for a little while when it was still a street car and then designed what you see now in 1991, and it’s been off the road since then. I never got the time to work on it because of working on everyone else’s cars. We had the car dropped and the suspension in, but that’s all we had. Then we had to do the suicide doors and roof chop. I have five guys in my shop, but three of us did everything in four months, and it’s all done in-house.” 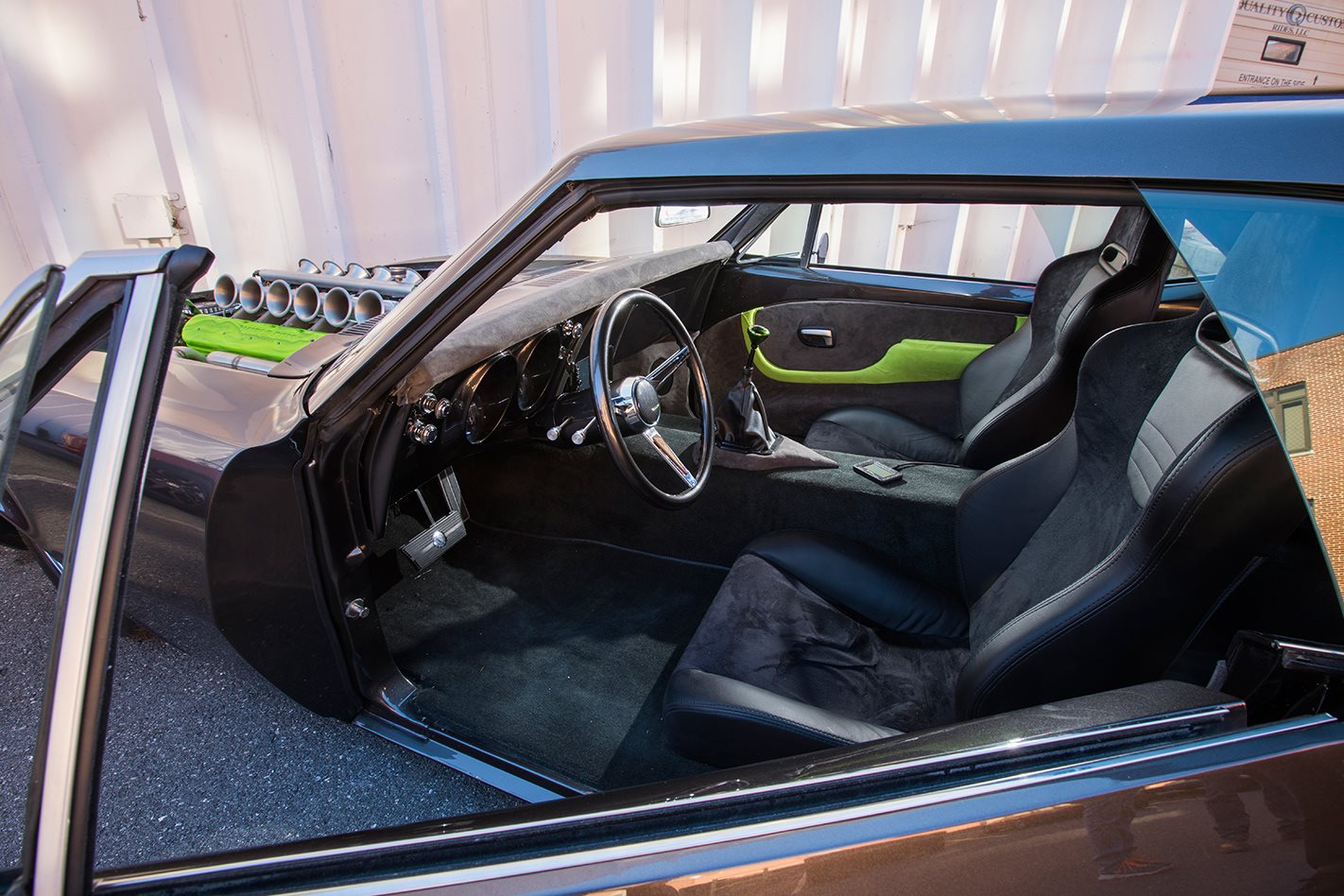 Surprisingly, the Camaro has kept its original floor, although the entire body was cut off and dropped three inches lower. The tunnel has been raised and the rear seat and parcel tray deleted to showcase the cantilever rear suspension system. And in case you didn’t spot it, it’s got suicide doors as well!

Some of that design work would have been completely off-tap back in the 90s, because it’s still pretty impressive today. The rear suspension especially, with its cantilever design allowing the airbags to be mounted in the boot and actuated by pushrods coming up through the floor, is still pretty out there. 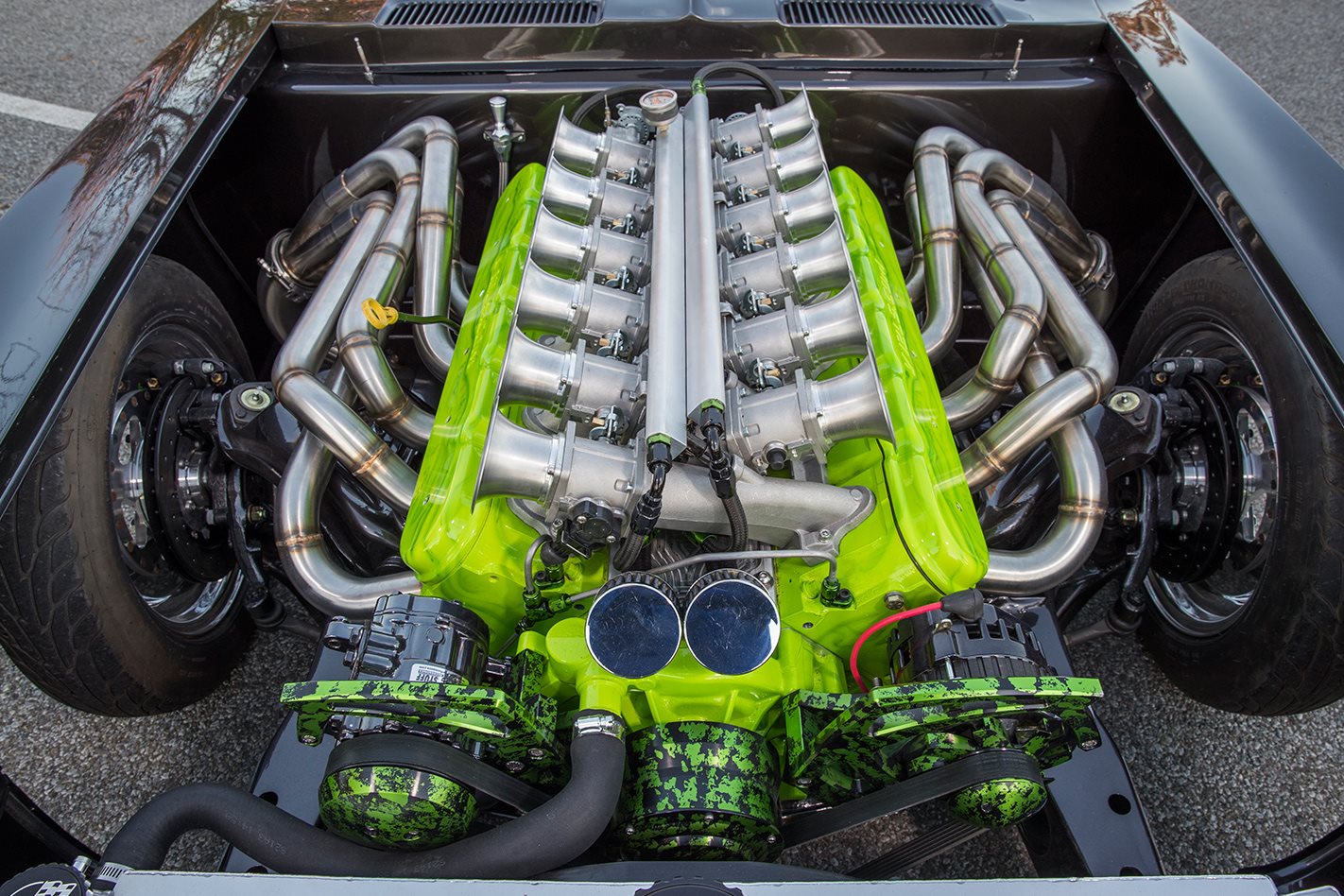 The rocker covers were custom-airbrushed to represent anti-freeze coolant, while the custom anodised finish on the pulleys, brackets and fittings is by a local business in Lancaster, Pennsylvania called AnnoWorkz

Most builds like this would incorporate a full aftermarket chassis, but that’s not the case with Mike’s Camaro. He wanted to keep as much of the ’67’s identity as possible, so it still has the original floor and monocoque design, although it is beefed up with chassis connectors and bracing in the rear to handle the suspension loads. The easy option up front would have been to slot in an aftermarket tubular IFS, but once again, Mike wanted to keep it looking fairly original, although none of it is. 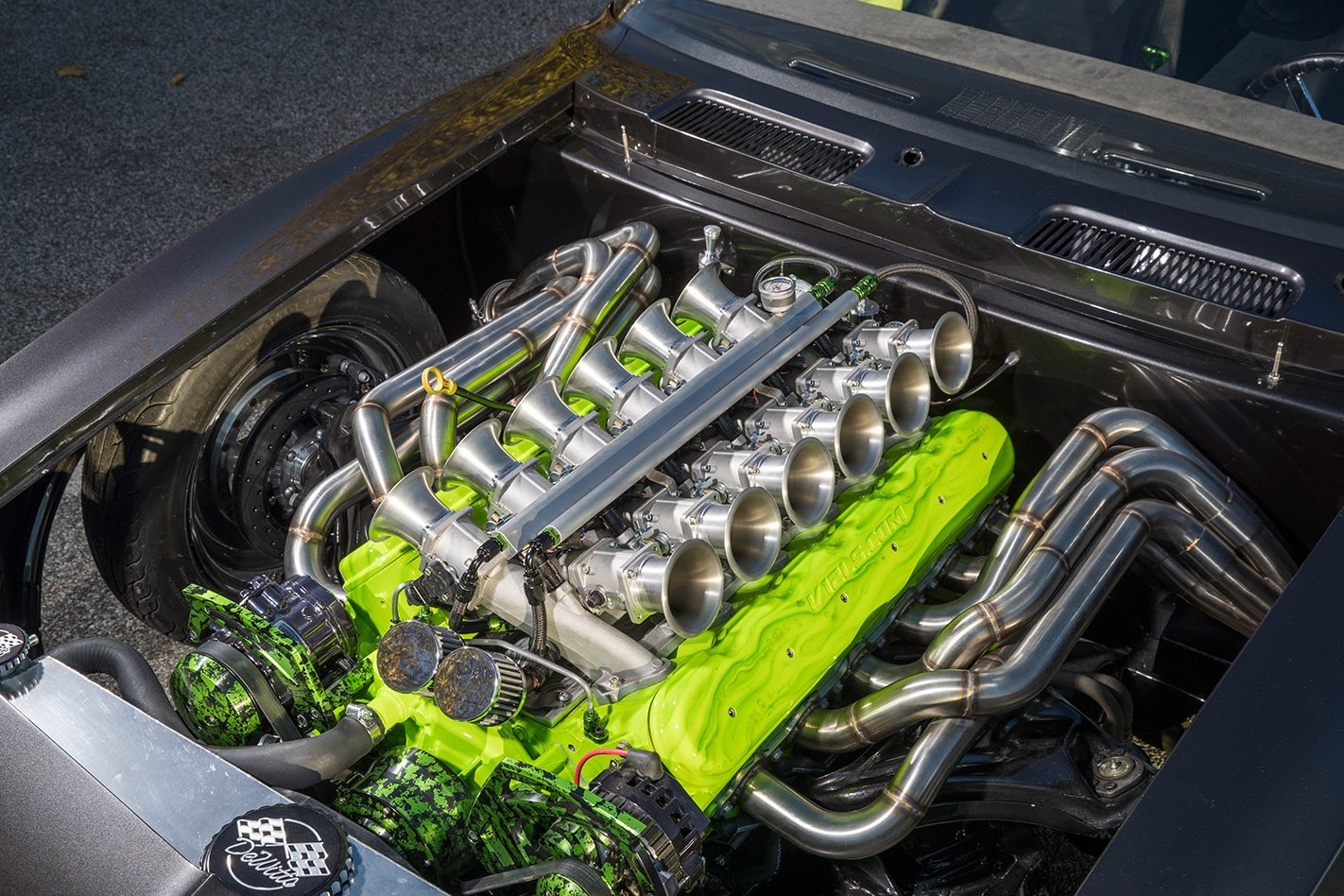 The pipes are also new and a major improvement, and with Haltech pressing the buttons on the tune-up, the engine should be well up on its 717hp test runs

“The suspension arms are standard, except I cut them up and re-welded them to make them look like they’re factory – the camber only moves 10 thousandths of an inch the whole way through the five inches of travel,” he says. “We also cut the subframe and took four inches out of the centre of it so we could get the turning clearance when it’s all the way down. I wanted to people to be able to walk up to this car, look at it and say: ‘We could do this.’ We build tube-chassis cars and people can’t relate to them because they’re too over the top.” 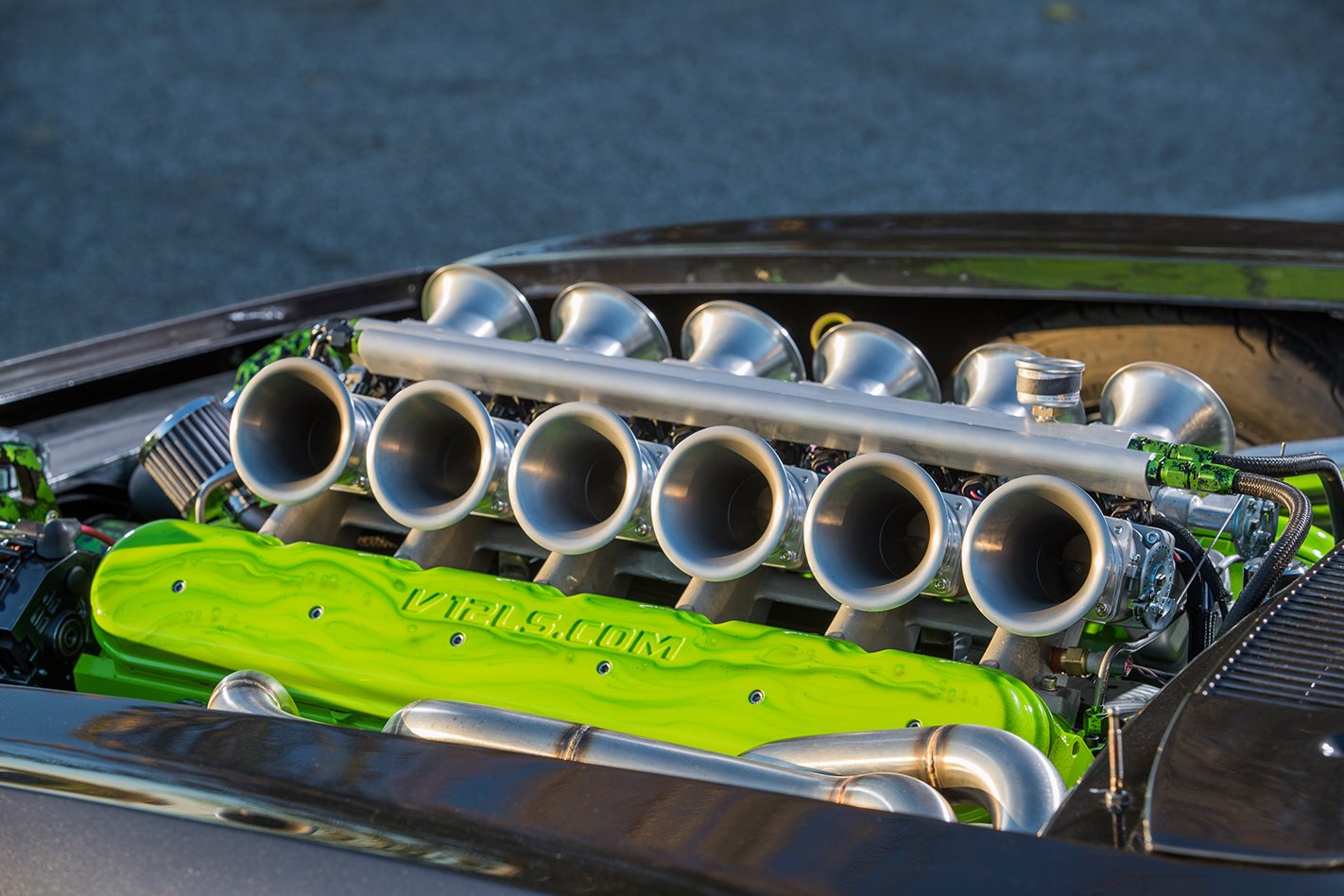 While the airbags go a long way to getting this car on the ground, there are a few other tricks that have been employed to give it that ground-scraping stance. “We cut the body off the floor of the car and dropped it down – channelled it – three inches, which is nothing anybody does on a monocoque car. We also took off the sills, which is another four-and-a-half inches. The one question we get the most is: ‘How far did you stretch the front end?’ We didn’t stretch it all, it just looks that way because we cut the four-and-a-half inches off the bottom of the fender. The key was, we put another bend in the fender to make a body line so it would look like it was all factory.” 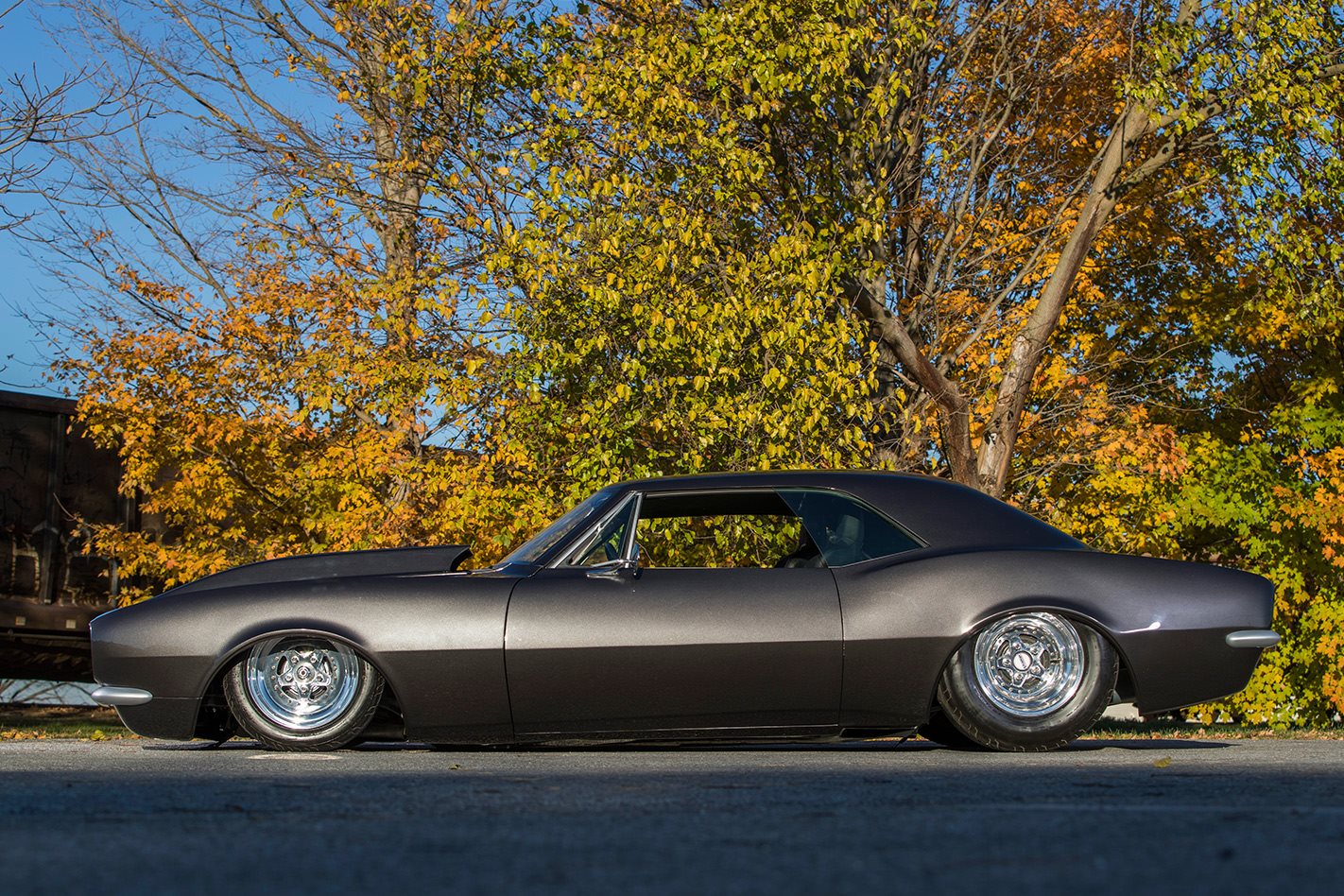 The car hasn’t been lengthened, it’s just an illusion from the body modifications and those extra four cylinders on the engine! Wheels are a set of Monocoque lightweight racing rims that Mike has had squirrelled away for over 20 years. They’re an aluminium-magnesium alloy and measure up at 15x10 out back and 15x5 up front

The car also copped a roof chop, with 1.25 inches taken out of the front pillars only, giving it a wedge chop to accentuate the rake even more. The front and rear glass has also been flush-mounted for a more modern look, and the suicide doors are actuated via the stock mirrors, which pull forward to release the door latch. 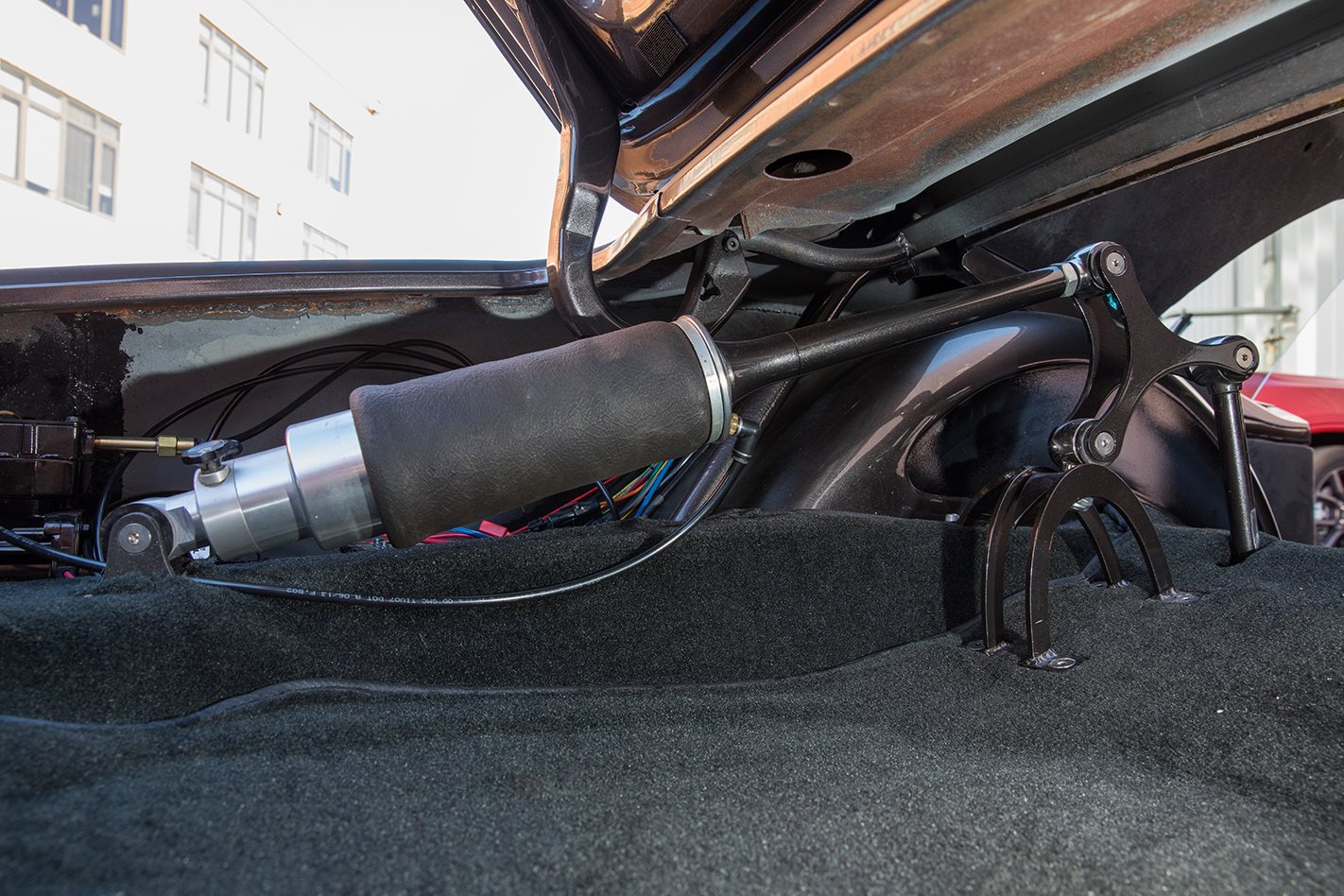 Even with all of those crazy body mods, getting a car to stand out amongst the thousands of displays at SEMA is a tough ask, so that’s why the engine now sports that wild 12-pack injection set-up and lime green paint. “I built the intake because I really wanted to show off that it was a V12, and the best way to do that was to do 12 singles,” Mike says. “The entire idea of painting the motor green was to stand out. We painted the car dark so that the motor would definitely grab your attention. Our job was to make the car as wild as the motor so that it would be in a great platform to see.” 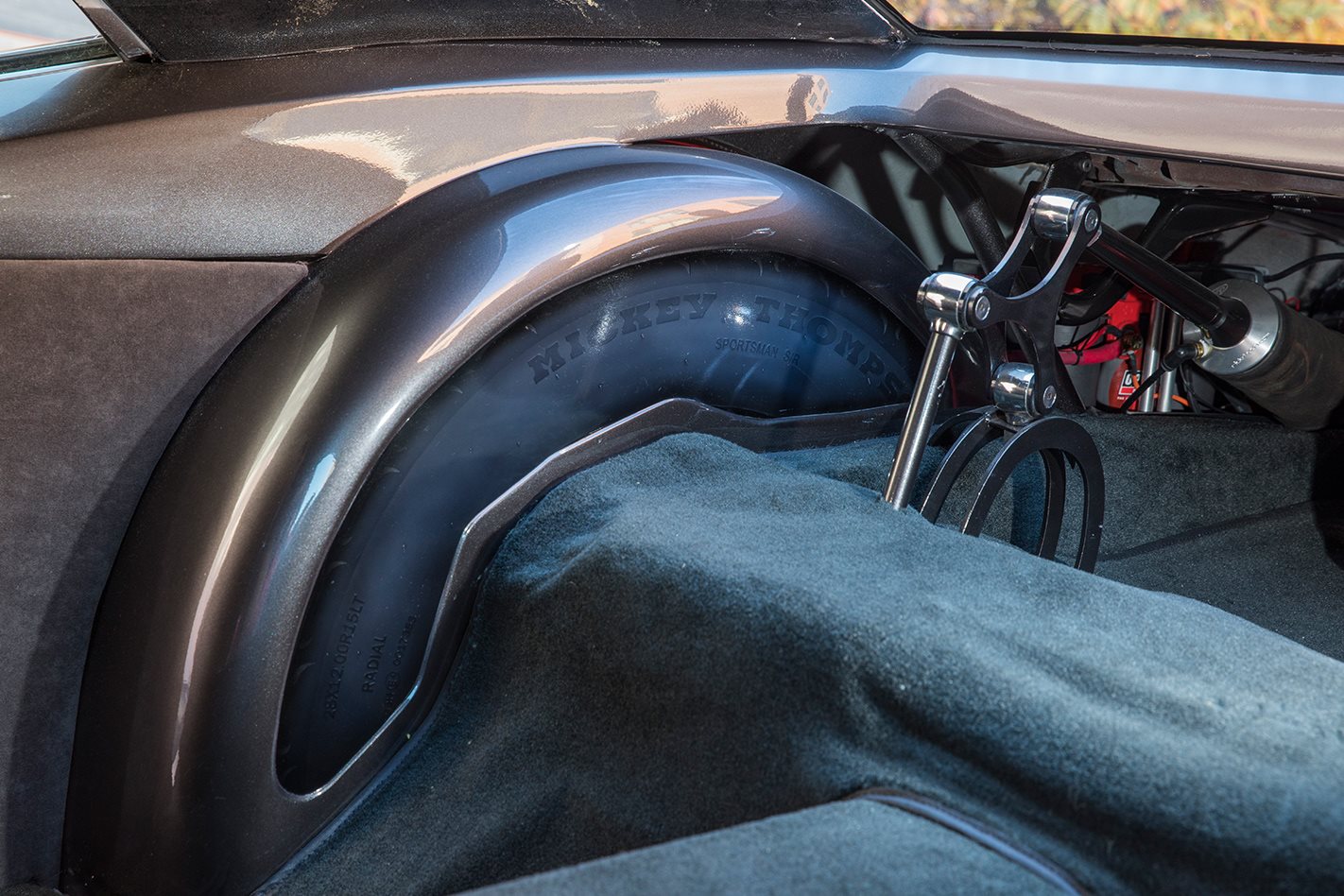 The engine has certainly had people speculating as to where it’s come from, with guesses ranging from Bugatti to Dodge Viper, until they finally asked what it was out of. “I said: ‘It’s not out of anything, yet. This is the first one.’ Then they’d look at it and I’d say it’s an LS and they’d go crazy!” 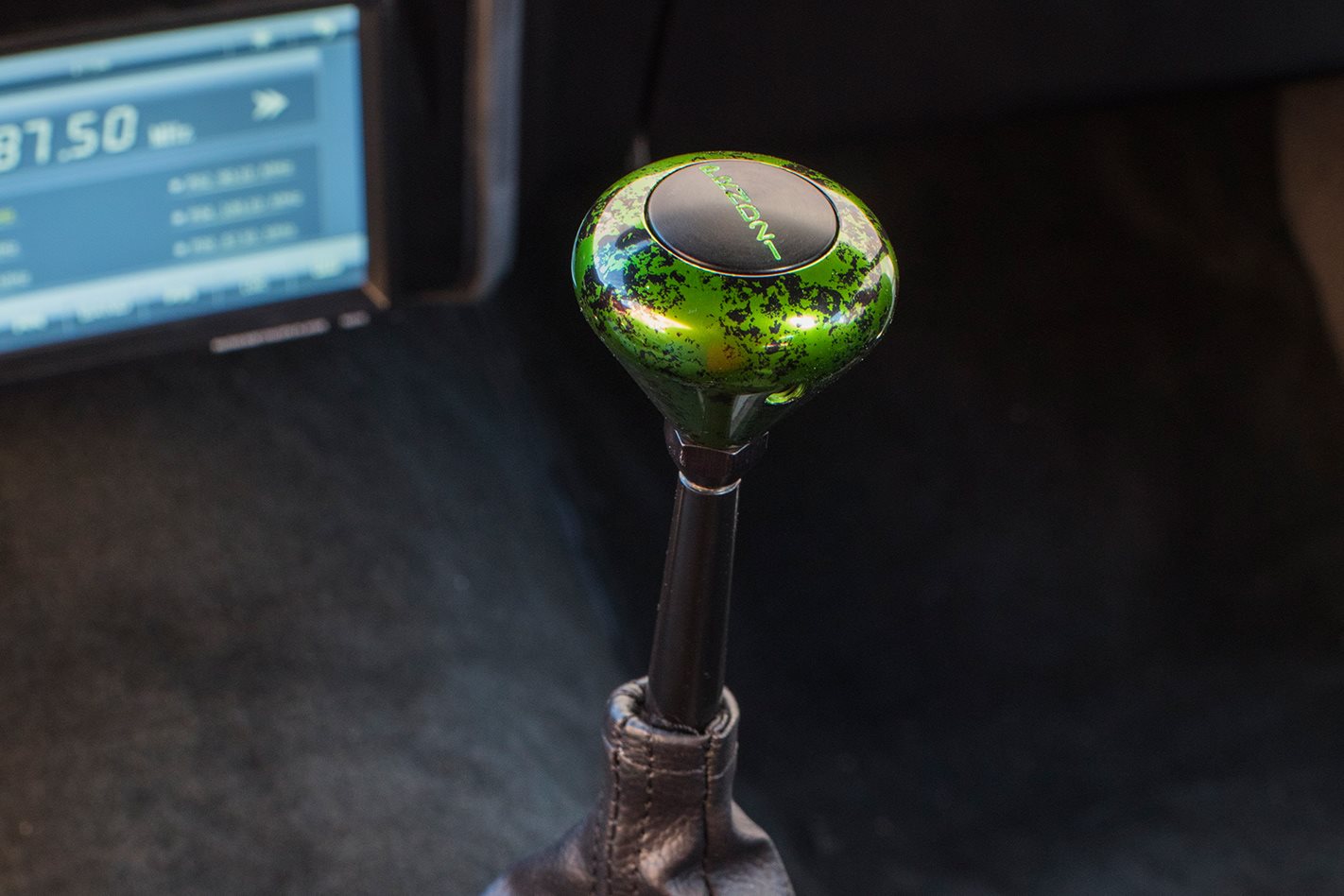 Currently, the cross-ram intake set-up has been shipped back to Oz, with Matt working with Dandy Engines in Melbourne to create a tuning map for it, as Mike has big plans to drive the wheels off the Camaro. What better way to prove the concept and get the word out about the V12 LS? 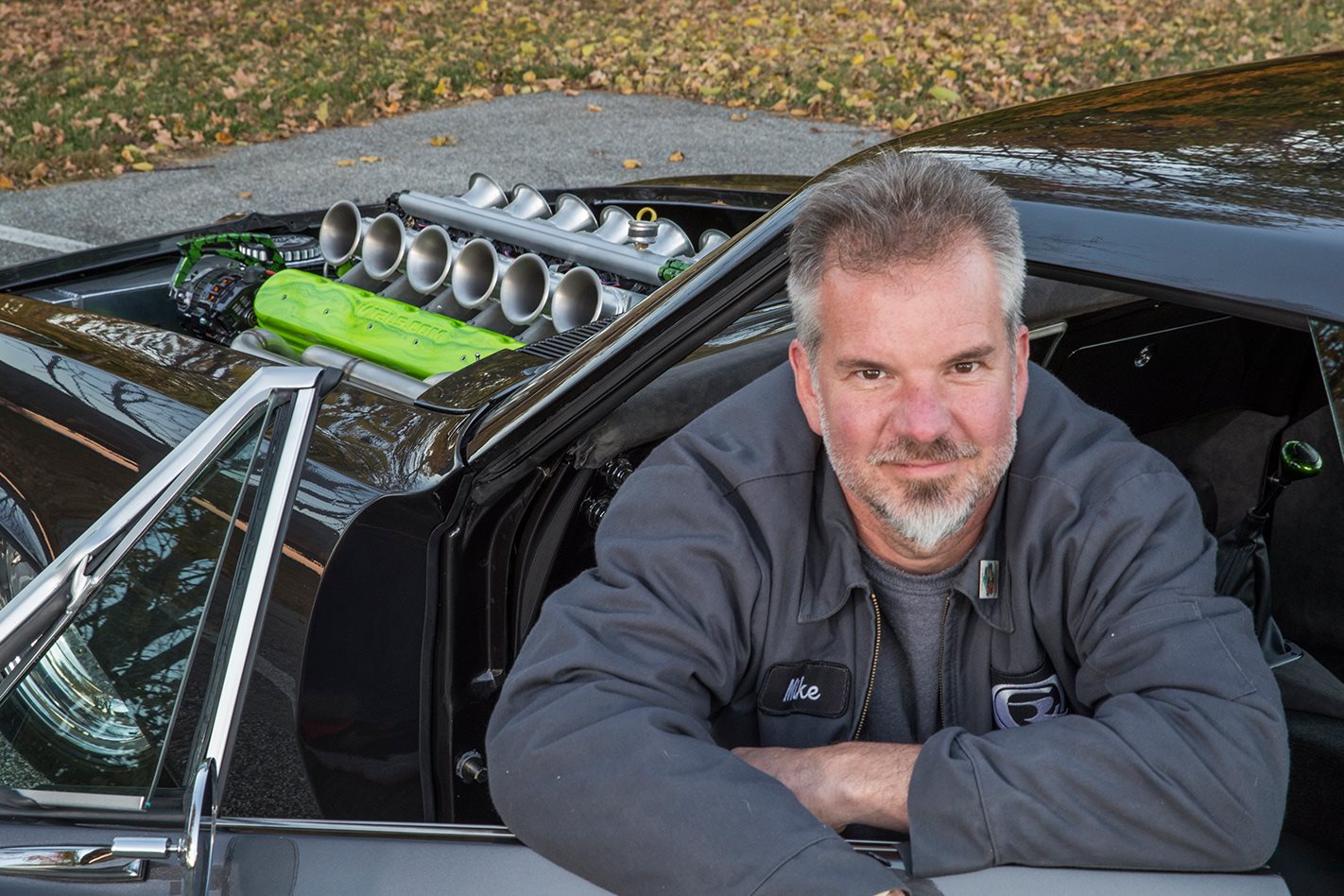 Mike Heim from Quality Custom Rides has owned his ’67 Camaro for over 30 years. It’s been chopped, channelled and customised like no other Camaro and is the perfect recipient for the wild V12 engine

If you want to find out more about the engine, visit V12LS.com.