THE US television show Street Outlaws has become one of the world’s most popular racing-based entertainment programs, with over 3.5 million viewers for the season. Irrespective of your take on street racing in general, and the authenticity of the theatrics on the show, the cars are super-tough and as good as the best you will find at any race track in the States.

Back in May, the boys from Castle Hill Performance were asked to go the States to install the latest Haltech ECU on one of the toughest cars featured on the show: the 1967 Dodge Dart of Joe Woods. The car, known as The Dominator, is currently sitting in the number eight spot for Street Outlaws, and is powered by a monster 632-cube big-block Chev with four nitrous kits.

In aspirated trim the Chevy was knocking out 900hp at the treads. Click on the giggle gas and with two stages activated it’s producing an impressive 1200rwhp. That’s before the Aussies had a crack. 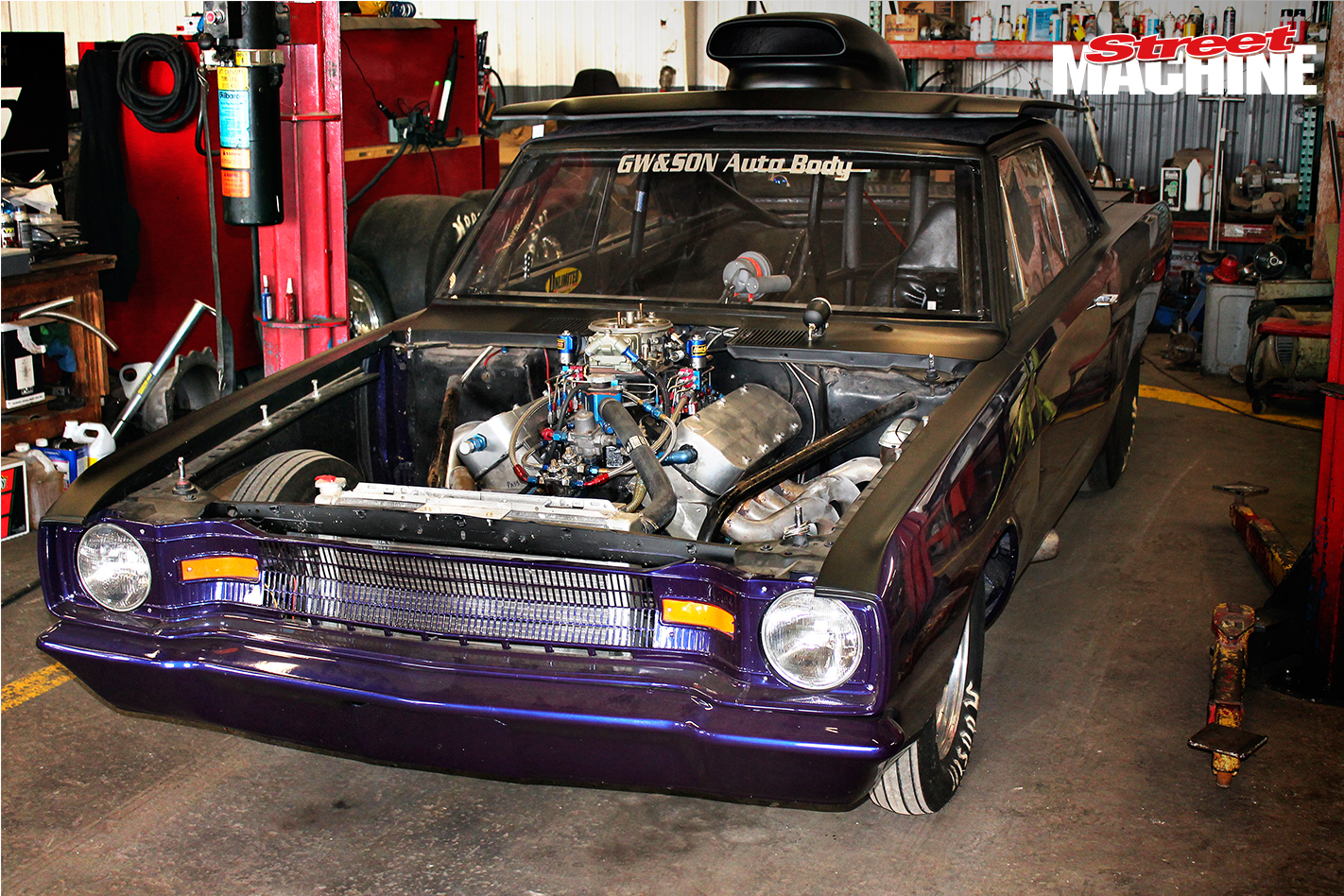 Before:The Dominator in its previous single four-barrel guise, which made 1200hp with two stages of nitrous

Up until recently, the car had been running a single Dominator carb, and with the need to lean on the big-block even harder to be competitive, it was time to step up.

Castle Hill Performance owner Dale Heiler has been involved in wiring and tuning cars for over 15 years now, and has recently become a Haltech dealer – although he can tune all manner of systems. He’s a fan of the show and like many hardcore racers he frequents the www.yellowbullet.com forums. What started as an off-the-cuff forum comment to Joe, offering to help with some EFI hardware, quickly developed into a serious deal, which saw a full fit-out of Joe’s car and data logging added to three other cars on the show that are also set to switch to full Haltech EFI systems. 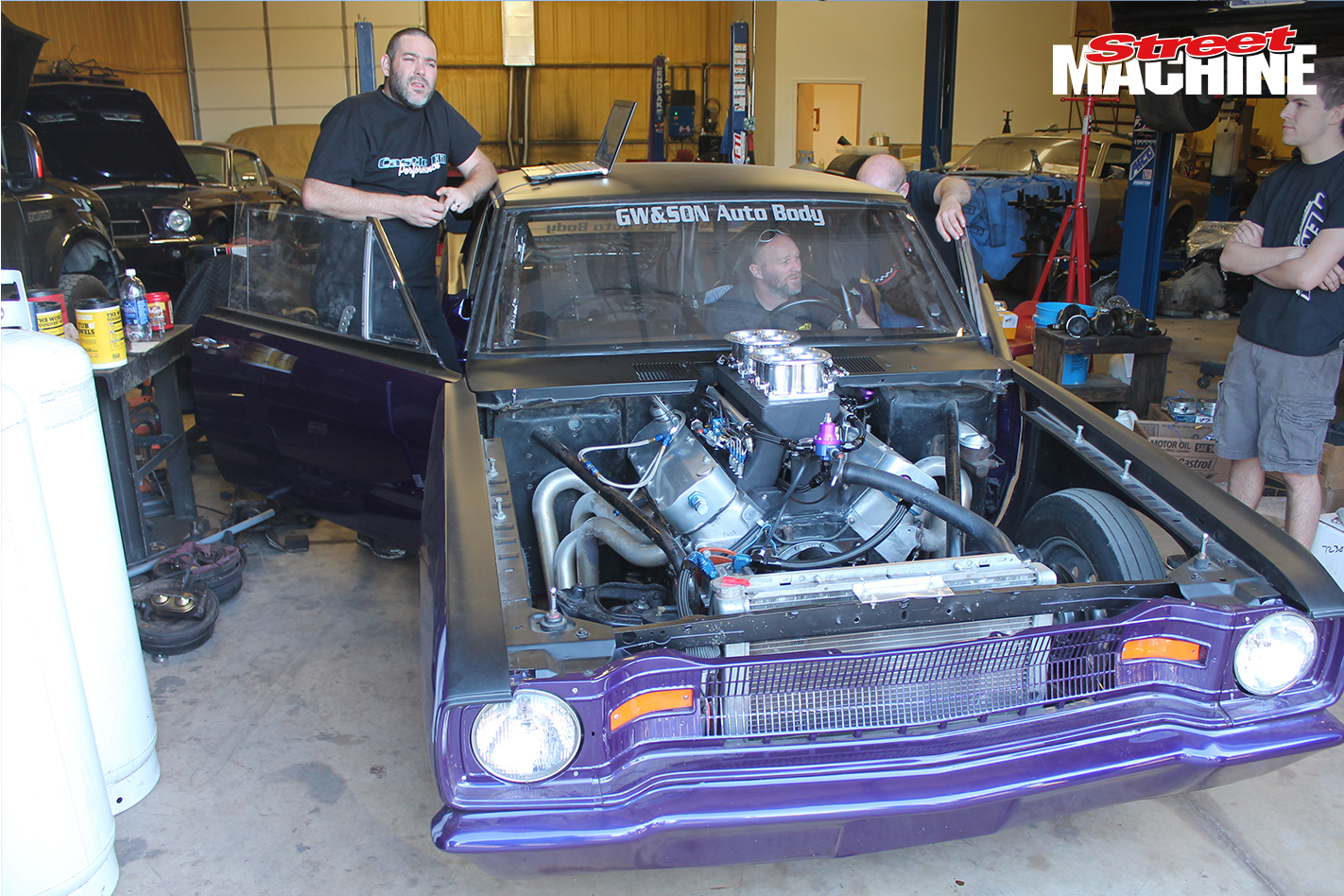 After: The Dart’s 632ci big block Chev now runs a pair of 2400cfm throttlebodies on a tunnel ram

After a bit of homework by both parties and some terrific support from Haltech, Dale, his buddy Andrew McArtney and Mitch Smith from Haltech headed to Oklahoma to meet with Joe (Dart), Doc (Monte Carlo), Monza (second-gen Camaro) and Derek (third-gen Camaro).

If you have never been to the States before, heading to a local track is a bit of a shock. Many racers are still stuck in a 1970s timewarp – the back-half car, big-tyre, big-block, single-carb, nitrous-plate era.

There are probably a few reasons for that, but when it comes to technology, Aussie racers are way more advanced. Even in the case of Street Outlaws, it’s much the same. Most of the boys need a simple rig that’s easy to tune, and because all the drivers are under contract to the show they need to be able to turn their cars around quickly and have them ready to race, no matter what, every Saturday night.

This reality is quite daunting for them, and now they’re solely relying on Dale to tune their cars via the internet from the other side of the world. 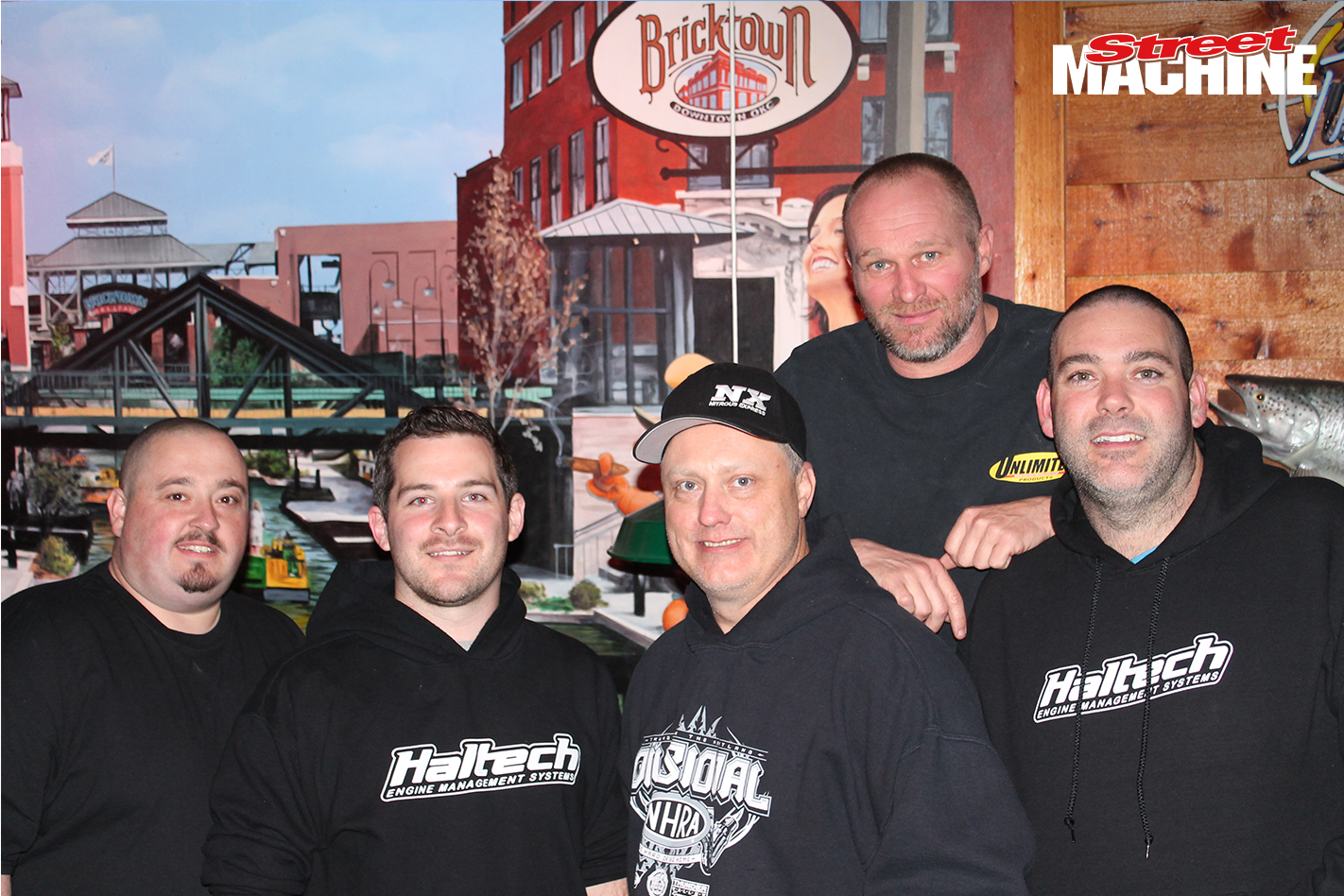 When Dale arrived nothing had been started so he, Mitch and Andrew got to work on Joe’s Dart, beginning by tearing off the manifold and getting the injectors welded in.

“As it happened, Joe had a tunnel-ram manifold lying around that we just sat on for shits and giggles,” Dale says. “Everyone thought how cool it looked so we ended up using the Dart tunnel ram with twin 2400cfm throttlebodies and a set of 180lb Fuel Injector Clinic injectors. The problem was his heads were so modified that it took us days to get the manifold matched up to his ports and the injectors mounted.

“In relation to EFI hardware, that car got it all,” Dale says. “Elite 2500 ECU with power-select CDI box with eight Haltech coils; two four-channel EGT boxes for eight EGTs; a wide-band AFR box; and a Racepak Smartwire IQ3 dash.”

Along with the EFI update Dale fitted a new fuel system, which included a Magnaflow fuel pump, filter and regulator, all plumbed with Aussie-made Speedflow fittings and lines that he lugged over from Oz.

The job took six days from start to finish, and then famed nitrous tuner, Monte Smith from Alabama, arrived to retune the nitrous kits on the car.

“We were lucky enough to have use of Doc’s workshop, but really had to do the entire job ourselves,” Dale says. “It was very long hours and things seemed to move slowly, but after six days we headed to the dyno. Joe was blown away by how responsive the system was, and thought that every part of the performance felt better. On the dyno we picked up an extra 100rwhp straight away.

“Finding an extra 100hp on a car that already makes 1200rwhp is just not that easy. We guess the ram itself would have added something, but we were stoked to have it running as well as we knew it could. The lads are very excited by the depth of the Haltech systems and we’ve had no issues with uploading software from here in Australia and me making minor changes.”

Dale is back in the US as we speak and put the car on the dyno with three nitrous kits in effect. As Discovery Channel was filming the run for next season’s Street Outlaws, we can’t reveal the figure, but it sure looks impressive! As does video of the test hit at Holly Springs in Mississippi from a few weeks ago. Check it out here: