Would you believe this incredible XY Falcon was built in just nine months?

LOTS of cruising. Those three words will bring a grin to the face of just about anyone who loves cars, and for Canberran Steve Santos, they represent a reward for building this frosty silver XY Falcon in an almost unbelievable nine months. 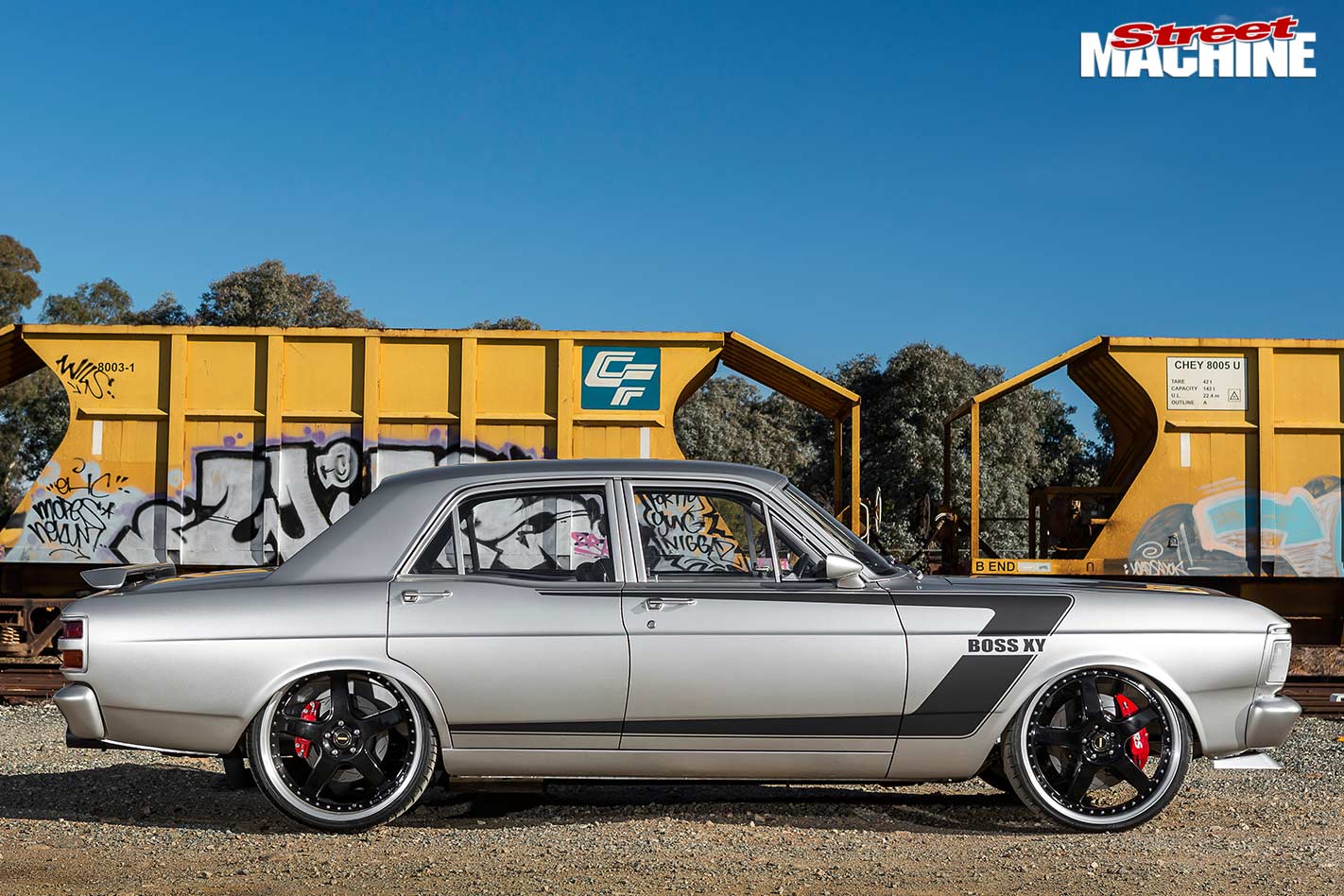 It’s not obvious straight away, but each wheelarch has been re-radiused to complement the extra size of the 22in Simmons rims. The fuel filler has been replaced with an aero-style one and much of the Falcon’s exterior staino has been binned. Crystal-type headlights add an extra bit of bling to the silver paint

“Yeah, she was hectic,” Steve says of the experience. “Finding the drive to go work on the car every single night for nine months was the hardest part of the build. We’d knock off work [Steve is a builder] at 4.45pm and then work on the car until 10 or 11 at night.” 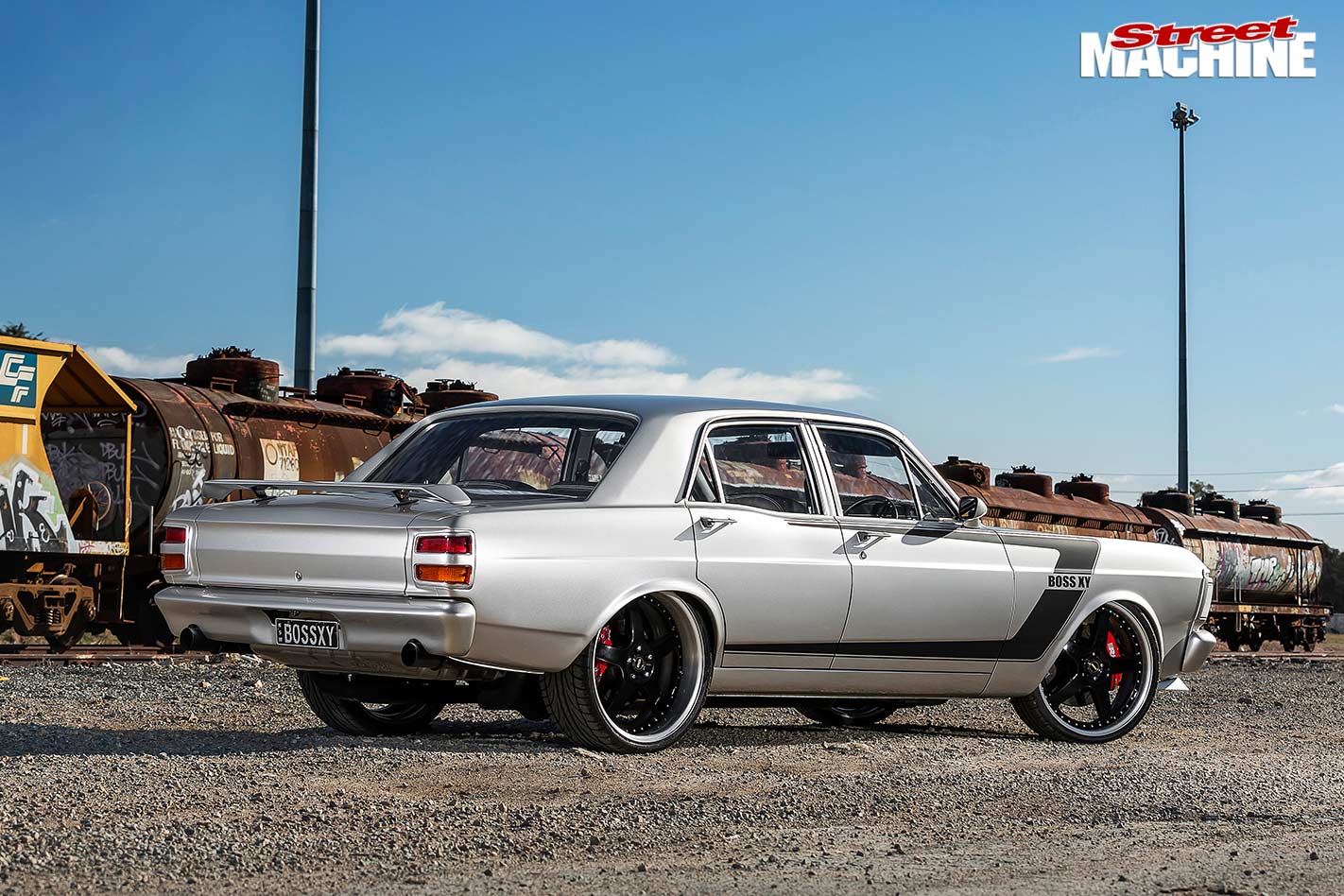 Most Ford fans will know about the XE-AU-series sedans’ Watt’s link rear suspension that keeps the beam rear axle located sideways in the chassis. The RRS rear suspension conversion uses a kinda-similar Mumford-link system that results in better roll-centre control. If you’re bamboozled by that, knowing there’s a tough-as-nails, old-school, 31-spline 3.5:1 9in axle swinging from it might make you feel better! Yes, it’s mini-tubbed, too

The XY was bought in Newcastle, five hours’ tow north of Canberra. “It looked pretty good,” Steve says, “but when it came back from the blaster it looked pretty average. We contemplated chasing another shell but decided the effort involved would be better spent to fix the one we had.” 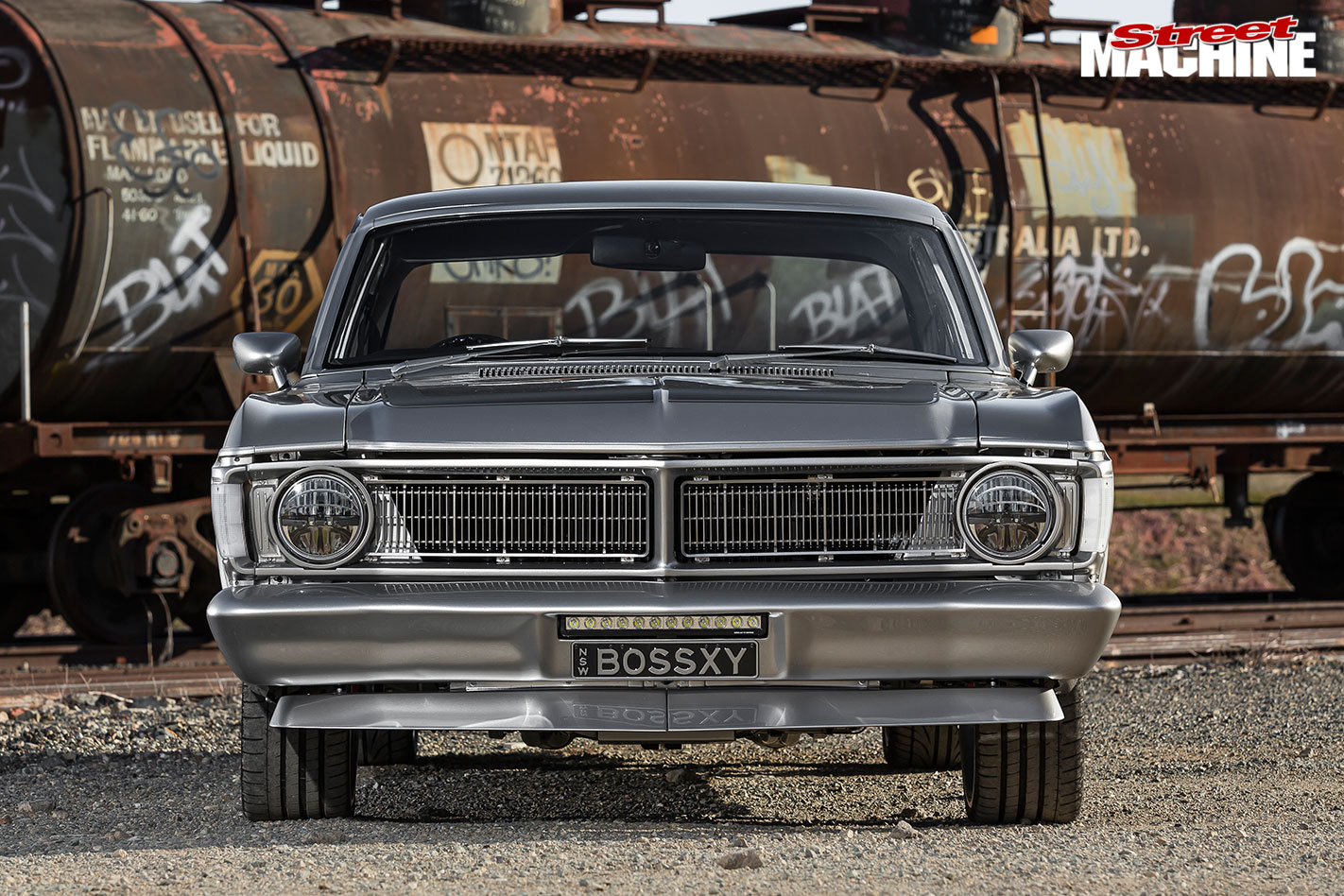 The plan was always to build the car the way it sits now. It needed to be that way to fit the nine-month gestation, and there was little time – or temptation – to stray from the picture in Steve’s imagination. The body mods and mechanical package were planned together, as plenty of tweaks would be needed under the skin of this Falcon to allow it to accept Steve’s intended driveline: A retrotech fuel-injected V8 driveline from a BA Falcon XR8, a suspension system set up for street driving without being over-the-top, and those enormous 22-inch wheels – all wrapped in the XY Falcon’s classic bluff styling layered in a frosty silver. 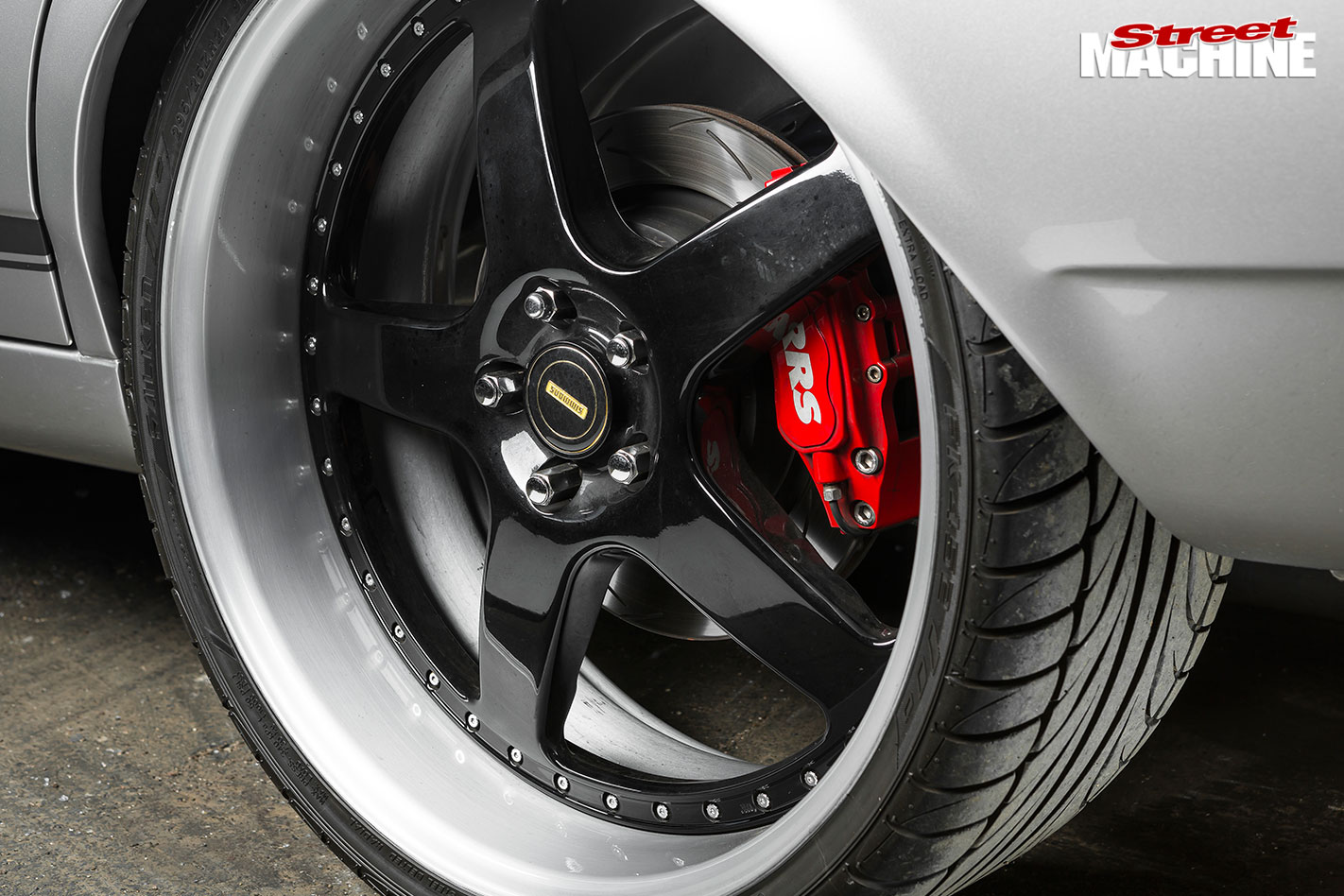 After purchasing the XY, Steve bought a written-off BA Falcon XR8. “It was for sale about 40 metres from where we were going to build the car!” he laughs. “I bought it the same weekend. Even though it was a write-off, the damage being at the rear meant I was able to drive it.” 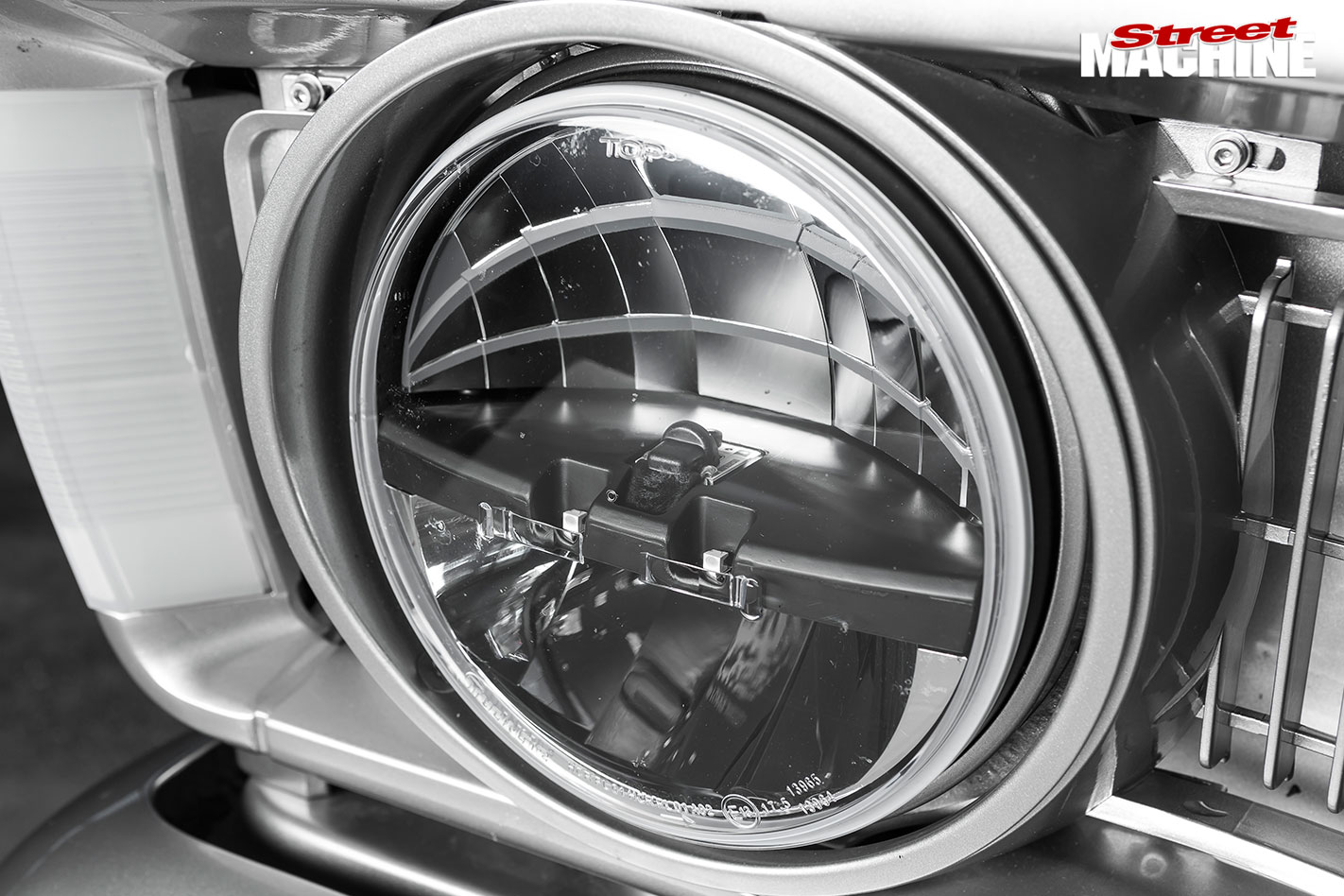 Steve had two staunch allies in the build of the XY. His mate Roberto ‘Tito’ Contreras, a panel beater by trade, was there every step of the way, while all the work happened in a bay at Kelley Body Works, the shop of another mate, Greg Stevenson. 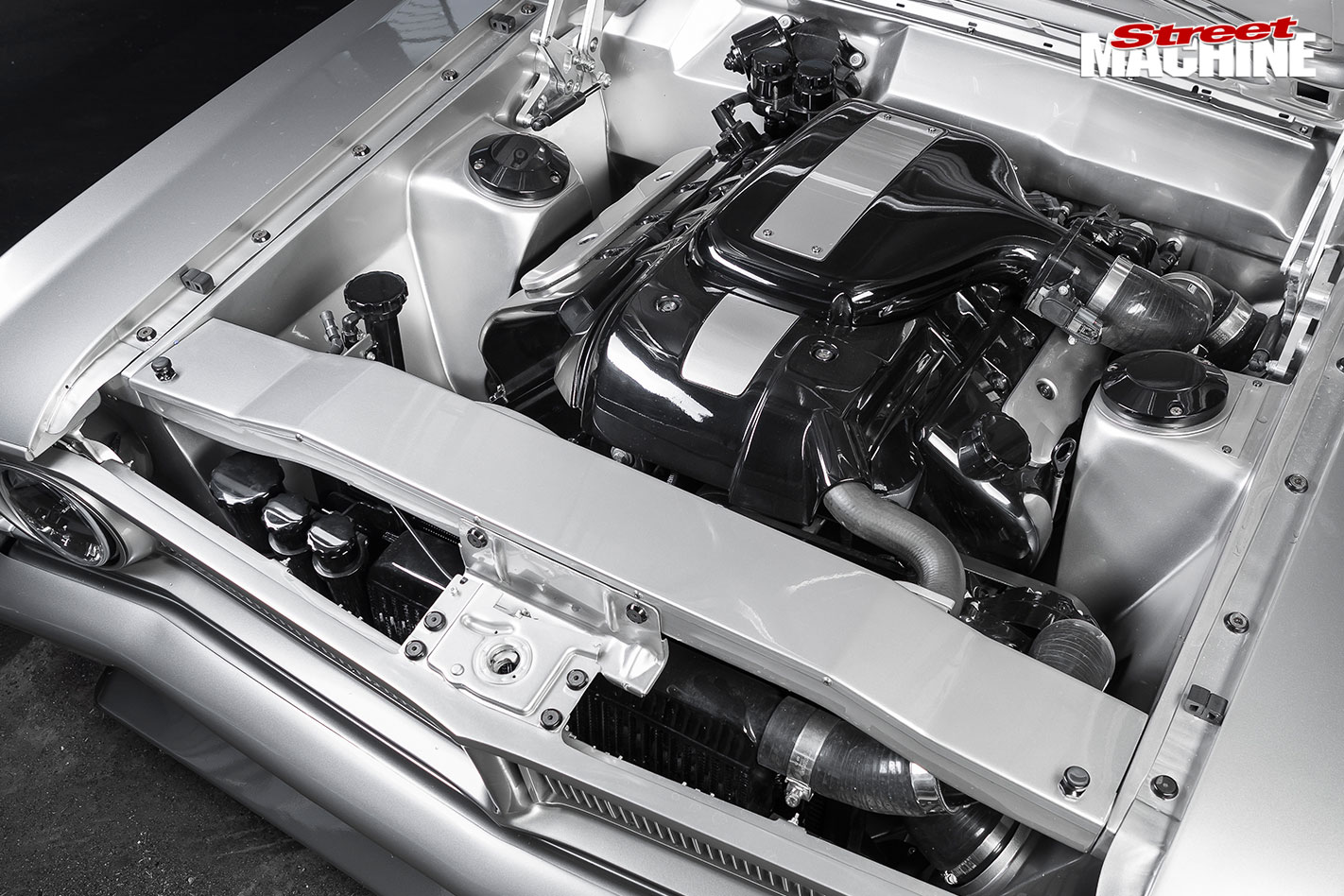 The BA Falcon XR8-sourced, Ford Performance Vehicles-built 5.4L DOHC V8’s plenum tends to dominate the engine bay in much the same way as a little blower or a shaker-type air cleaner would on an old-school Cleveland V8. This four-cam V8 is supercharged, too – there’s a CAPA centrifugal blower tucked into the passenger-side front corner

“We sat the two cars under the same roof, stripped everything we thought we’d need and got rid of the remainder.” Of course that included the engine and gearbox (with 120km on the odo), but Steve also had plans for the XR8’s front seats and plenty of other parts too, such as the wiring. 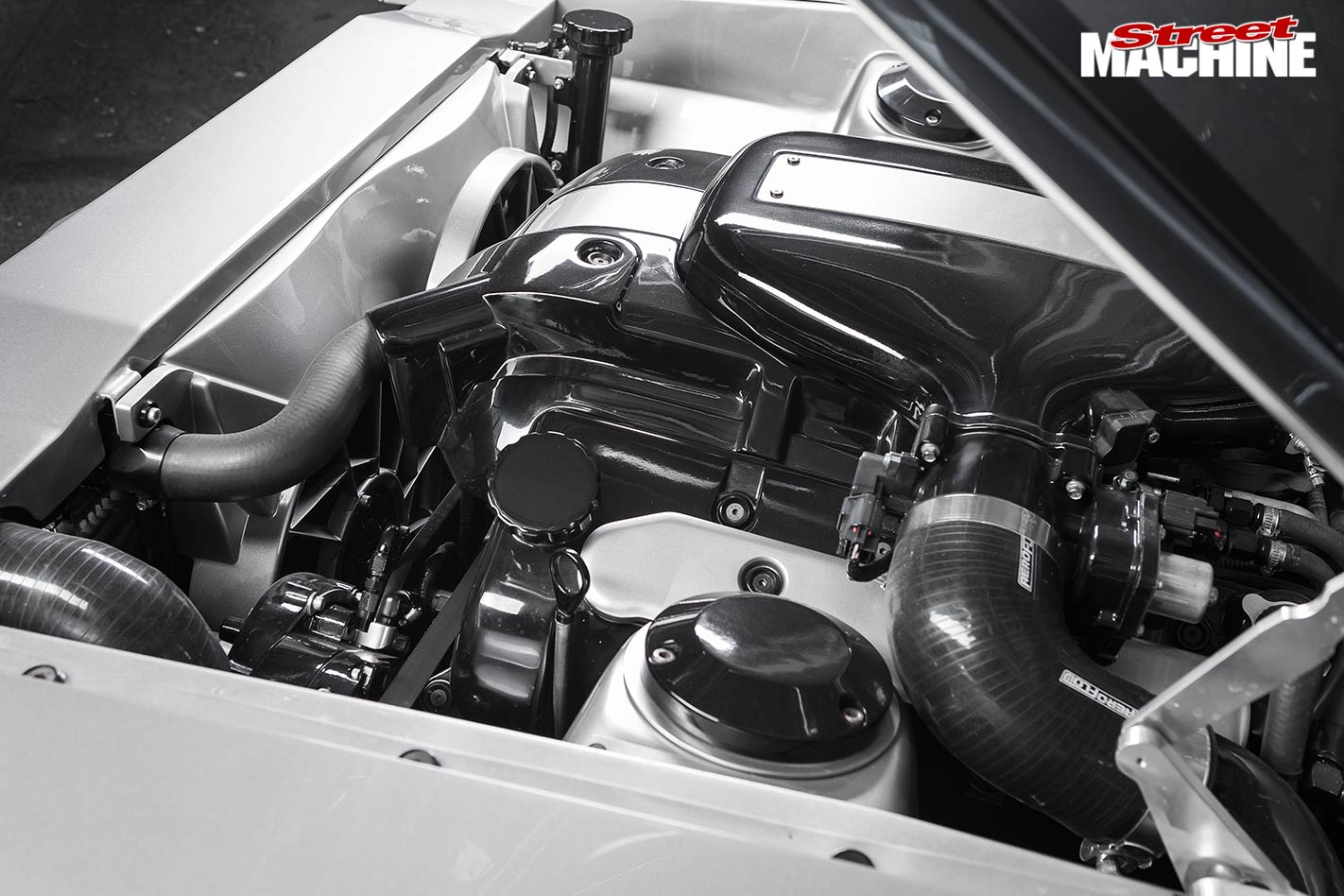 The silver that Steve chose for the Falcon has a story behind it. “Years ago I had an XR8 ute that I made a custom tray for and added VZ Commodore guard flutes to. It was at my mate’s panel shop and he asked: ‘What colour are we gonna paint it?’ I thought we were just going to blend in the modifications, but he said: ‘Choose a colour!’ Since then all my stuff has been silver: another ute, a work van, the VL Commodore, a Harley, my work trailers, the work truck. All silver!” 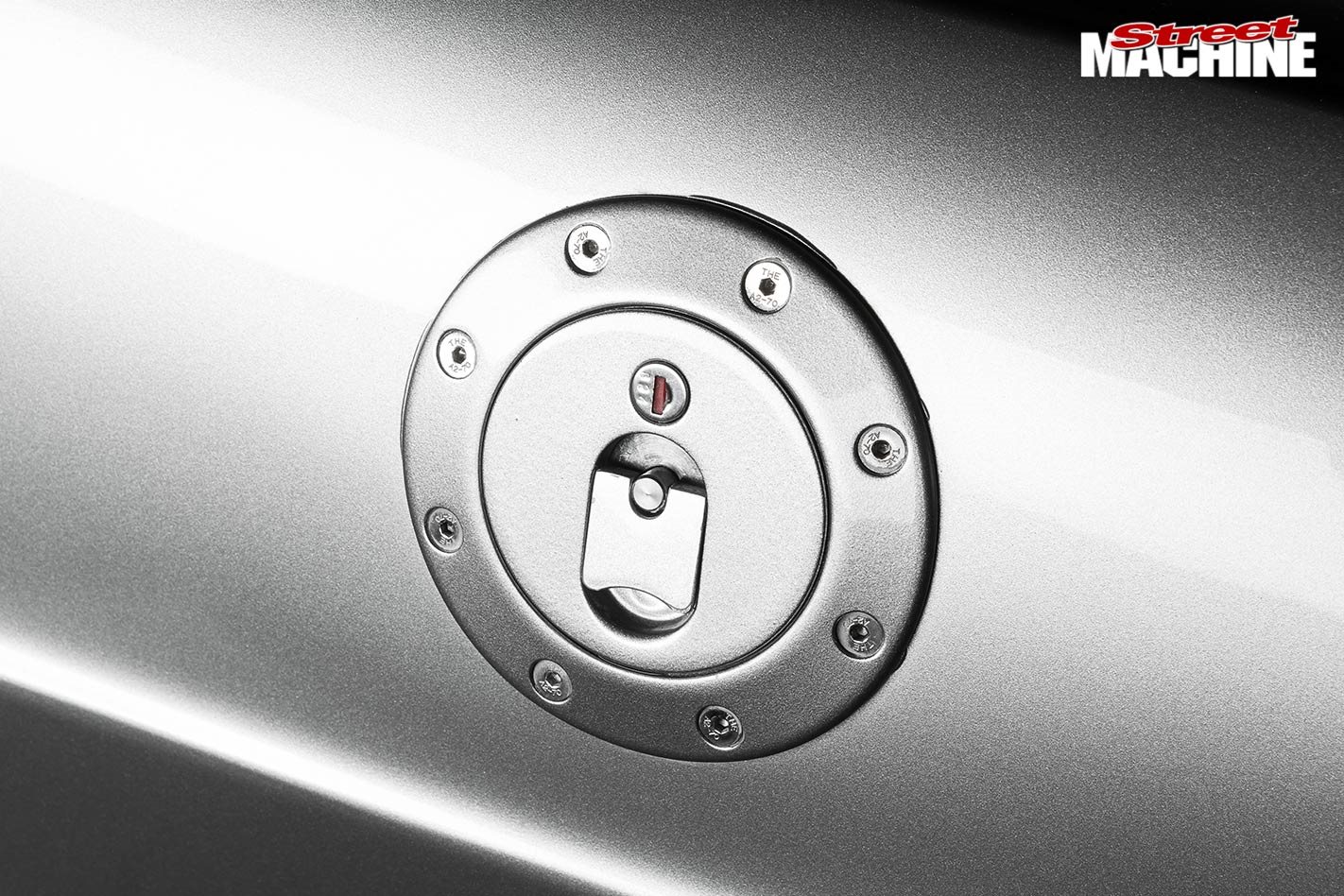 The black stripes, inspired by a later-model GS, were applied because the finished car was very silver indeed. “It needed something to break things up,” Steve admits. “And I didn’t want to do yet another GT replica; there’s 15 times the number of GTs on the roads now than ever!” 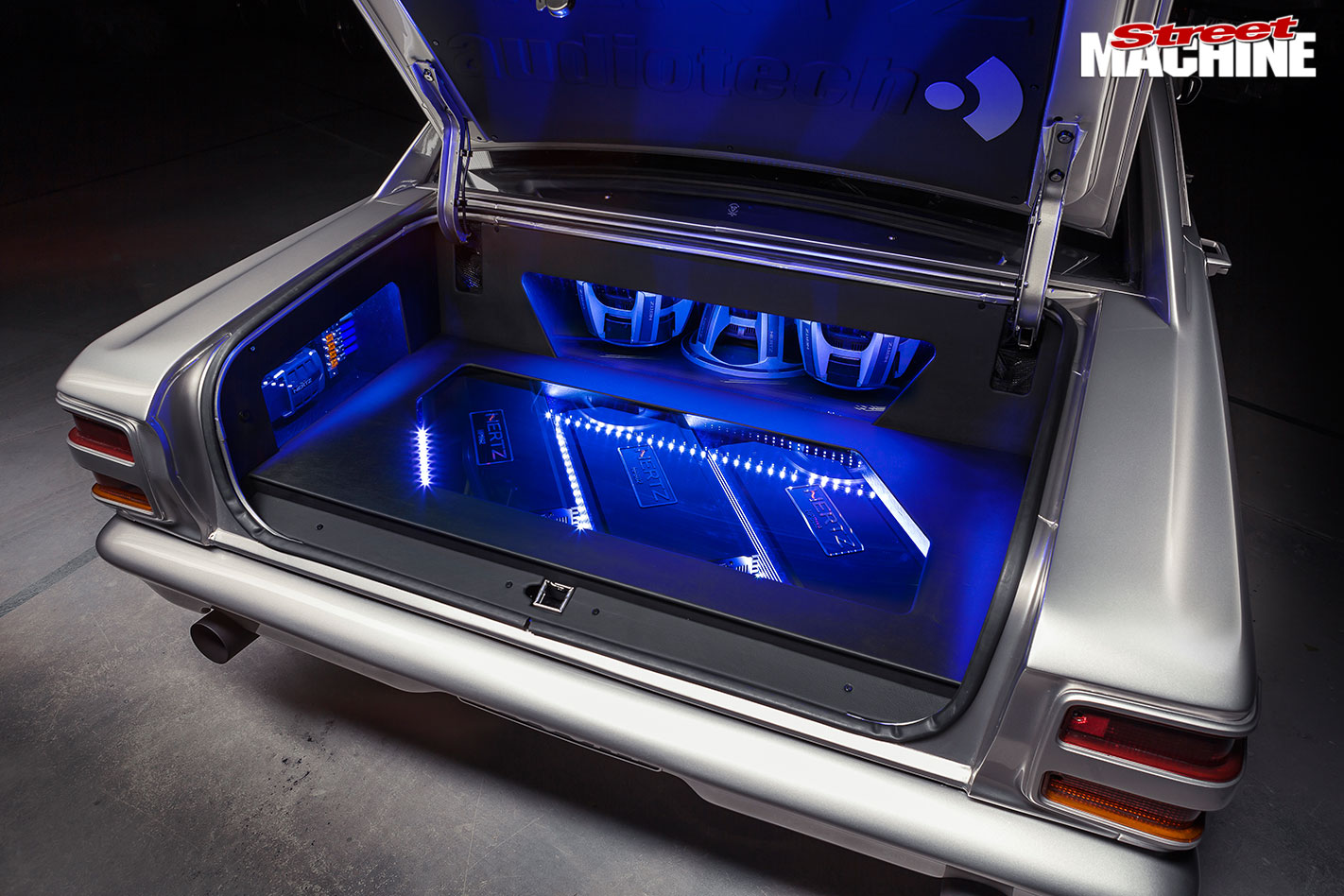 Audiotech at Tuggeranong installed the Clarion head unit, with Hertz hardware elsewhere: splits front and rear and three 10in subs enclosed in the boot, all driven from three amps. “I have no idea how many Watts it is,” Steve admits, “but it’s enough to make a big rumble!”

After being checked and freshened by Summernats Horsepower Heroes demon Jake Edwards, the engine and its attendant four-speed auto gearbox were slung into the engine bay using RRS conversion components. The new-century XR8 powerplant doesn’t drop straight into an XY Falcon, though, so the spring towers were abbreviated and plated to create a wider bay. 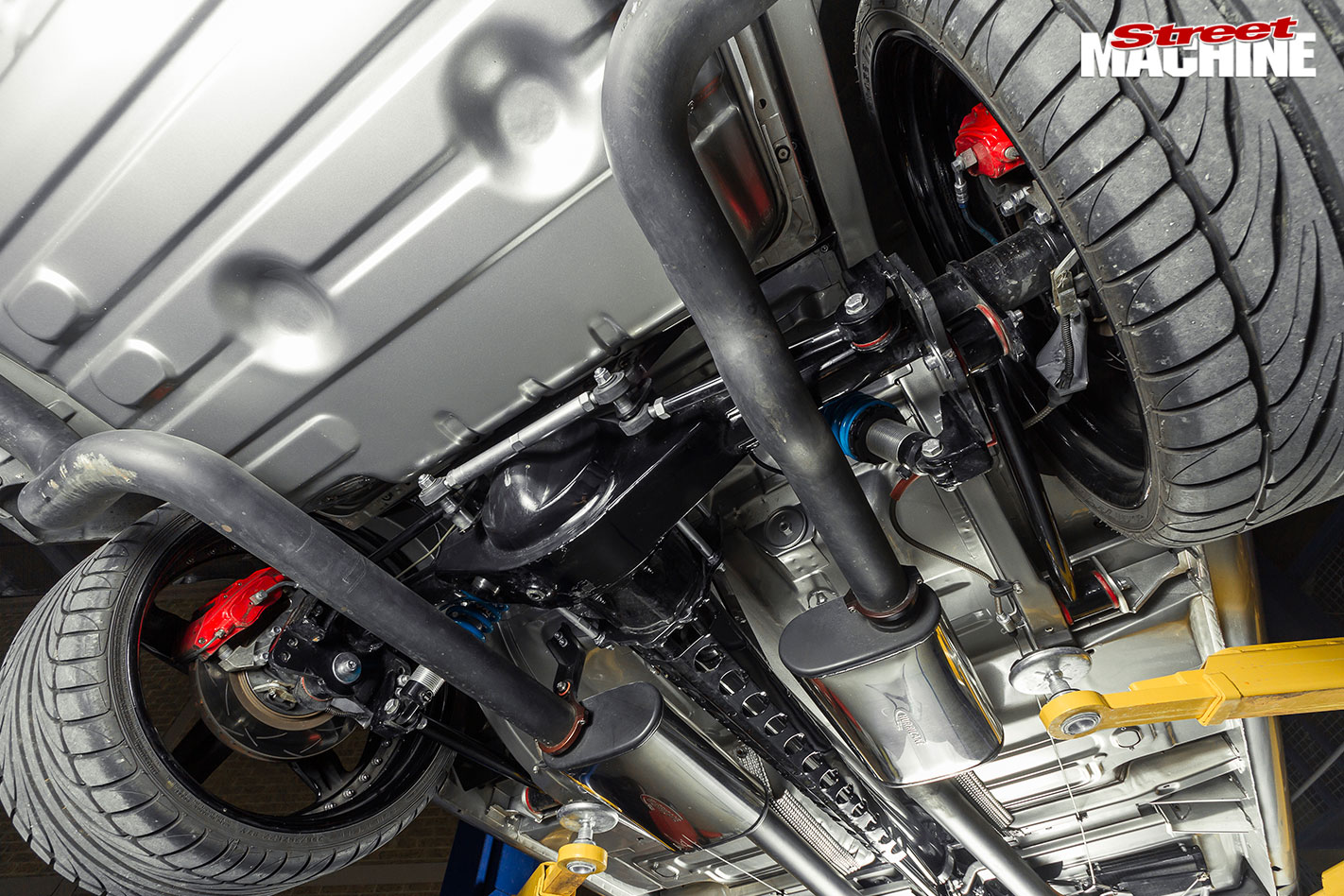 “That was the biggest change – the strut towers,” Steve says. “But even with the RRS stuff, transplanting the later engine is still a big task; it’s not just Lego!”

RRS also provided the conversion-friendly brake booster/master cylinder hardware – it’s now under the dash – and the extractors to allow the big quad-cammer to fit. The radiator is an alloy aftermarket item cooled by the donor XR8’s electric fans. The management system – lifted from the BA – works happily in its new home with a wiring harness modified by Wayne Egan and with a new tune by Jake. 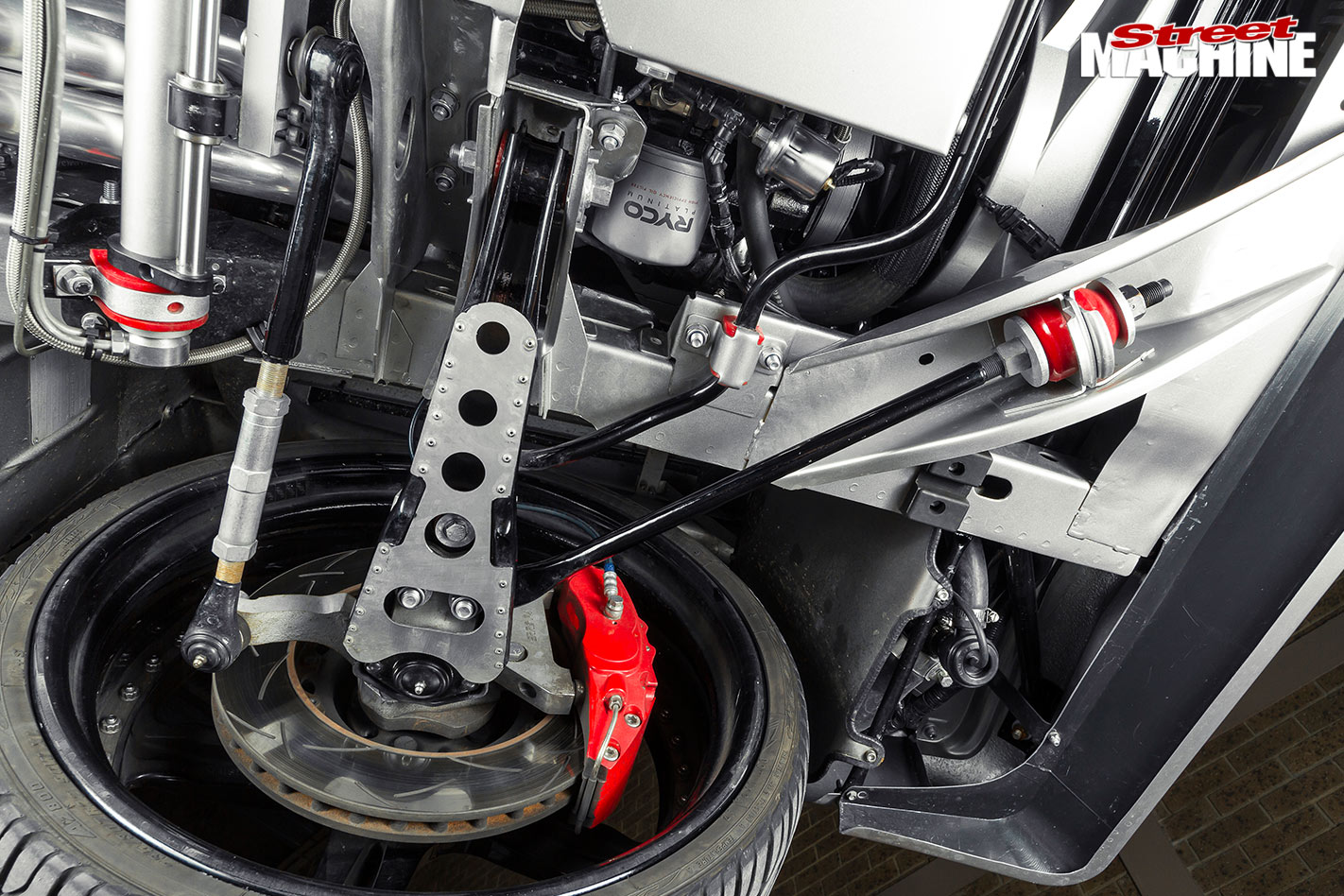 Steve made the engine look its best, too; it’s all factory stuff, but with components such as the cam covers filed, filled and finished to improve on the factory appearance. Just in case you didn’t notice, there’s a little CAPA-supplied Vortech centrifugal blower in there, too, boosting a modest 9psi. 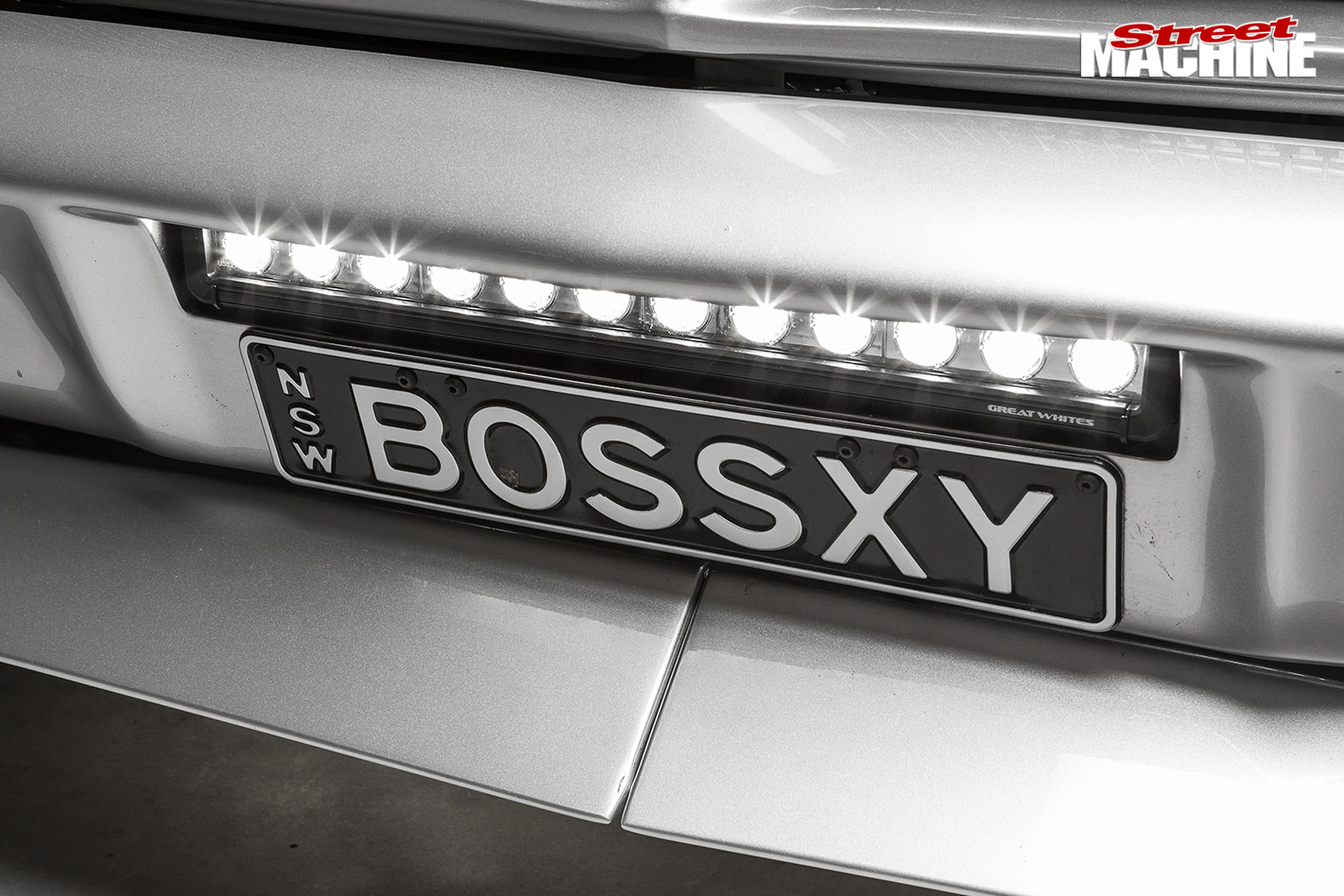 The transmission was given a tweak, starting with a looser converter by Auto Torque in Phillip, ACT. “It’s not the best-respected ’box,” Steve says of the Aussie-made BTR four-speed auto. “They did the usual little mods to allow it to survive the power it has.” 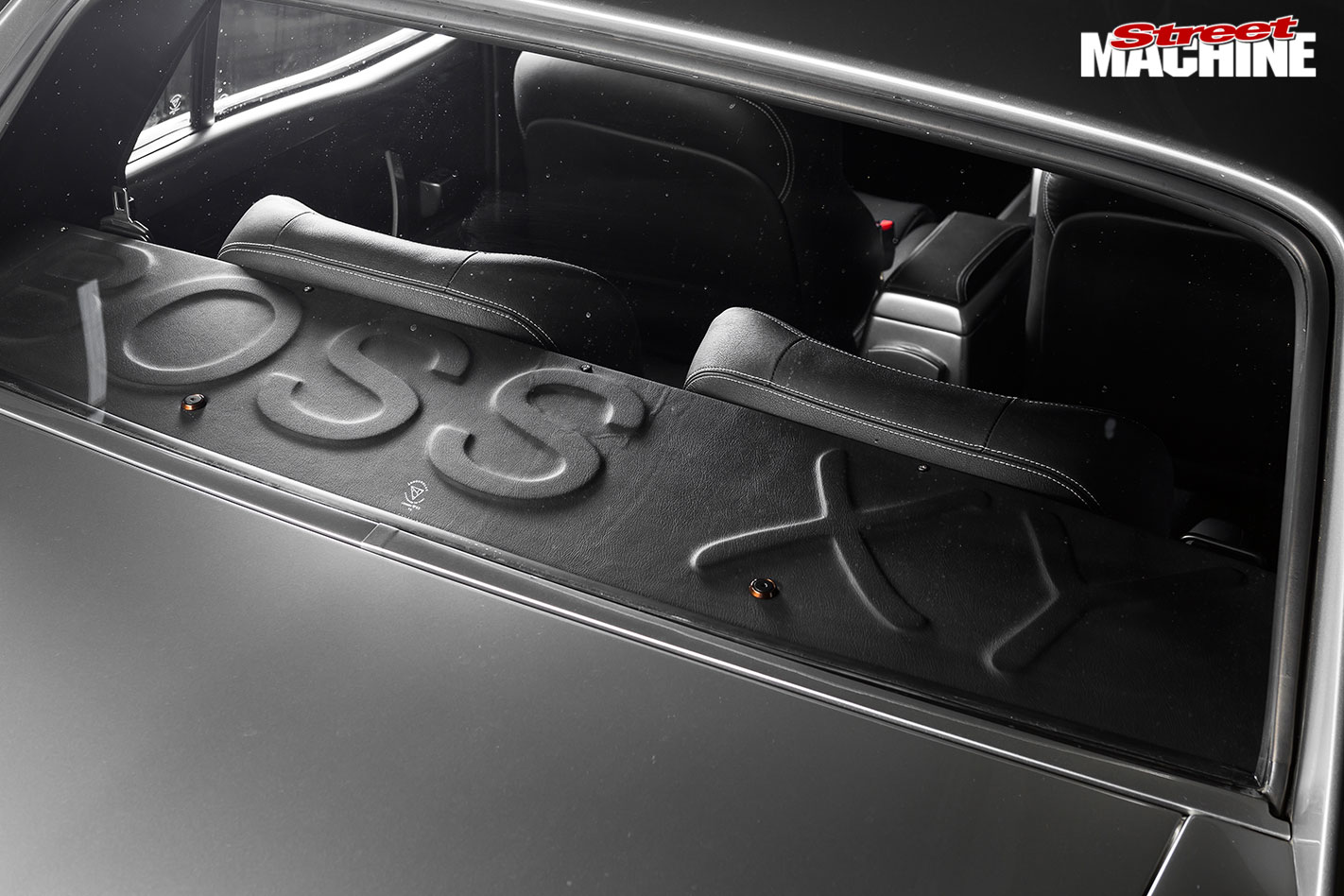 The strut front suspension conversion, rack-and-pinion steering and the three-link coil-sprung rear end are all RRS conversion pieces too. The coil-over/strut front tightens the roadholding by ridding the Falcon of its sometimes wayward front upper control arms, while the rear suspension is particularly interesting as it has a long girder-like link beginning at the nine-inch diff and reaching forward to the gearbox. 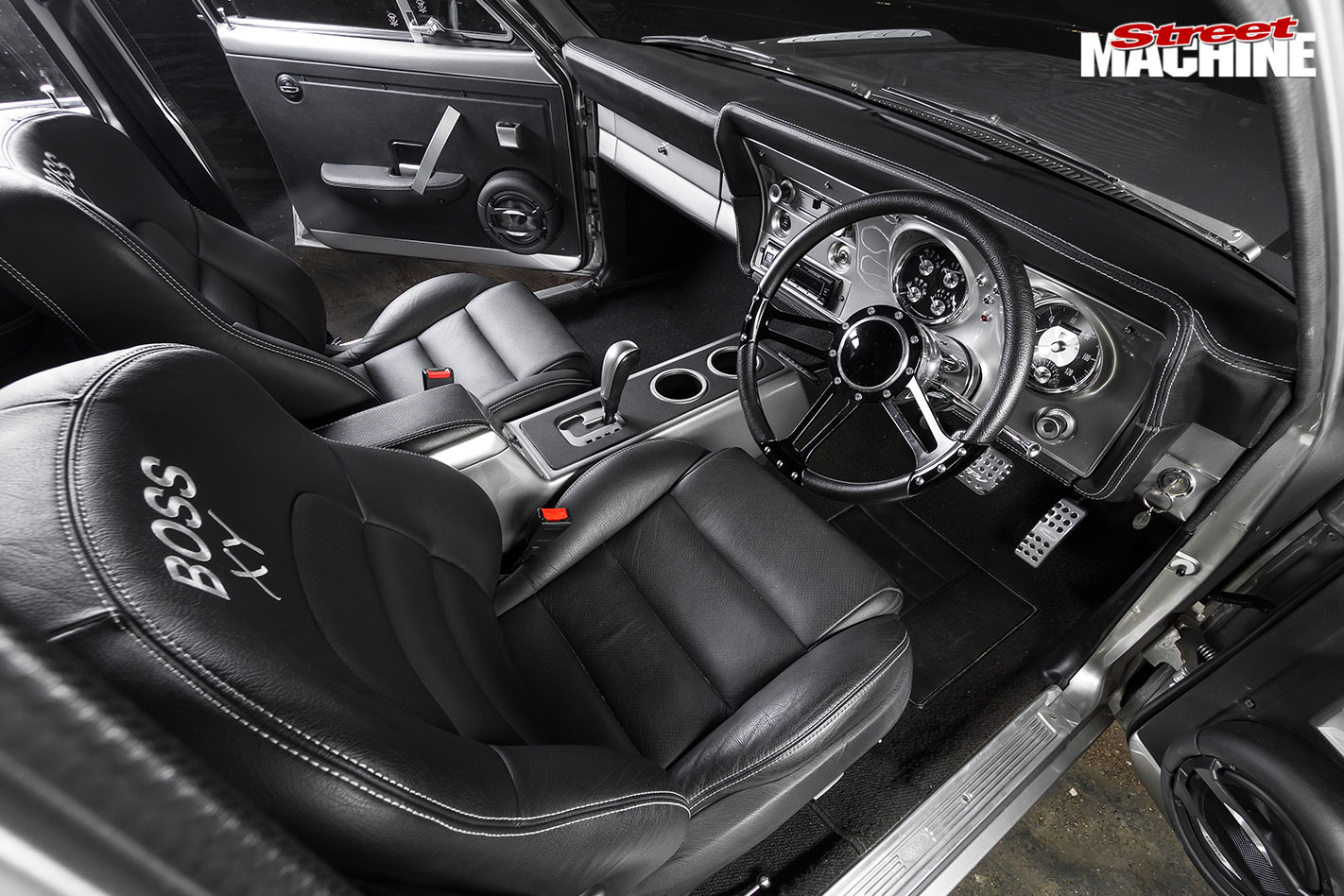 Four leather-trimmed XR8 seats, complete with electrics but sans headrests, dominate an interior that nicely blends then and now. “They’re Auto Meters,” says Steve of the gauges. “I reckon they have the right look for the car.” He’s right, you know!

Inside, Steve grabbed another two XR8 buckets to be installed in the rear, and there’s plenty of smarts in employing components such as the BA XR8’s shifter unit. The stitching of the black leather is the work of Steve’s mate Gavin Lockwood. 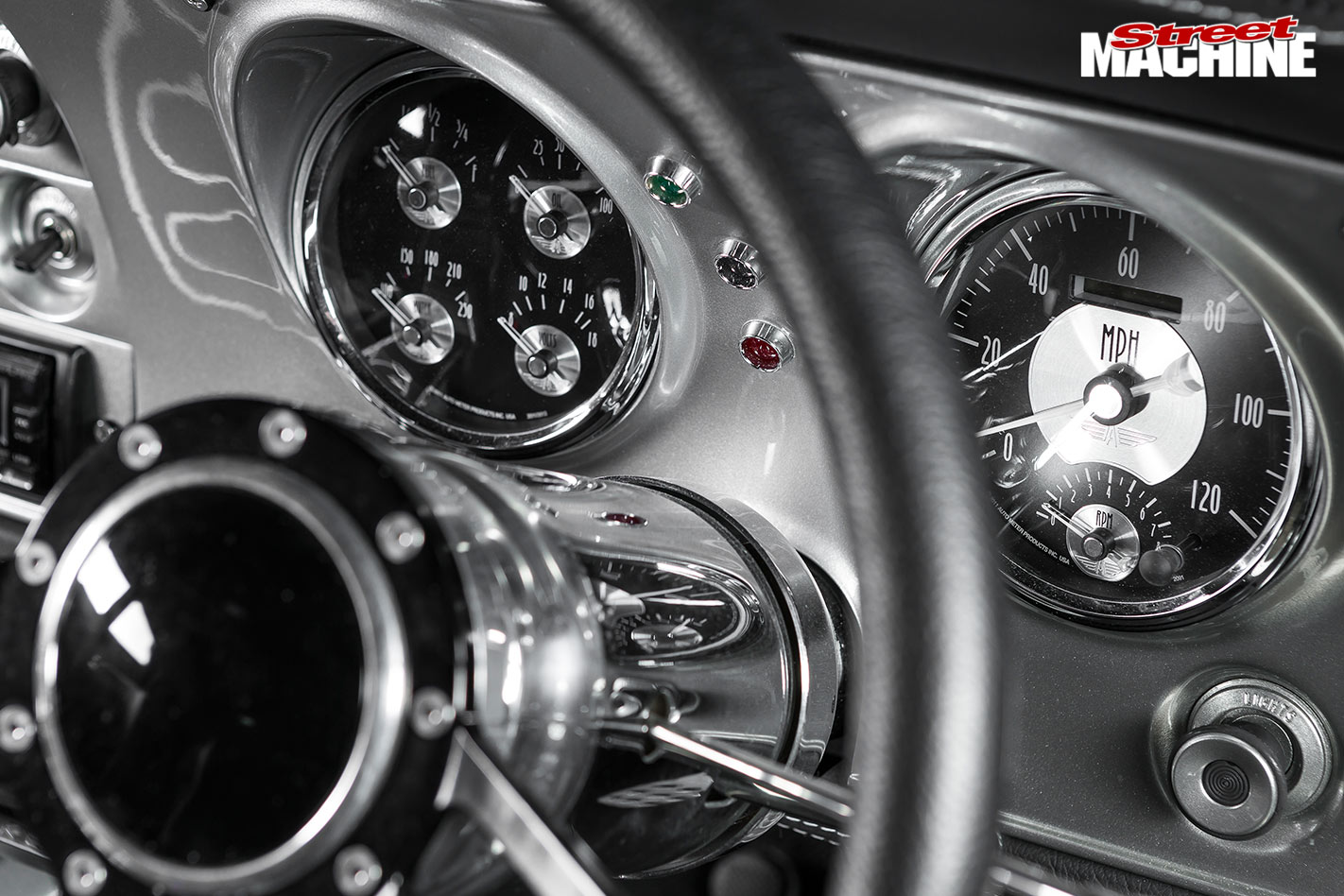 On its Summernats debut in 2016, Steve’s Falcon drove straight into the Top 20. But despite the high standard, this is one trophy-grade Falcon that wears its ‘street machine’ title with pride. It’s regularly driven: “It’s generally Sunday afternoons,” Steve says. “But I have no qualms about taking it down to the coast – Batemans Bay, everywhere. I think in the first year I had it, I drove it 7000 miles. 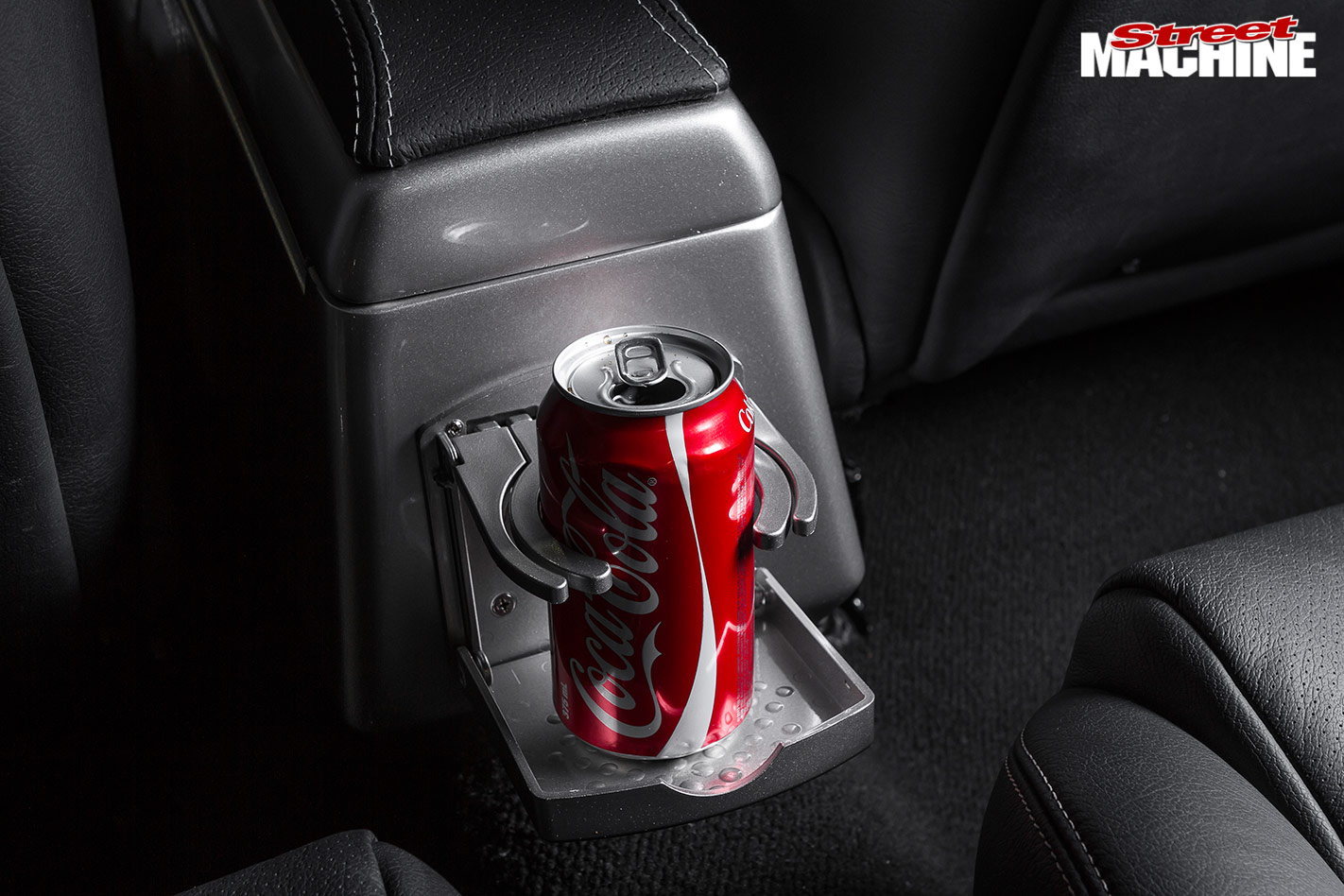 “It was a lot of time and effort,” he concludes, “but I haven’t had to touch it since I finished it.” 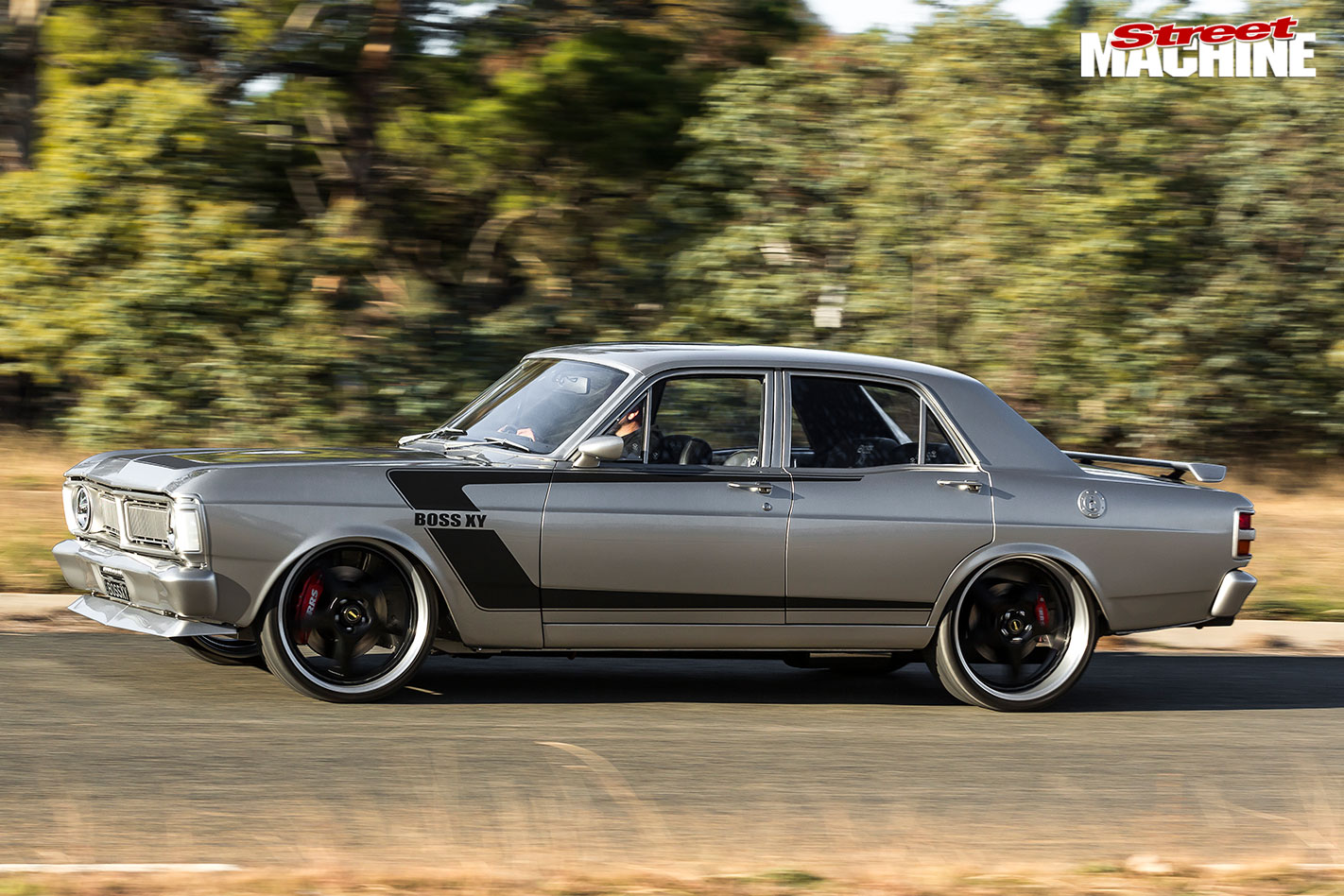