IT’S only been back on the show scene a few months and Damien Mackey’s reworked GTR Torana already has a swag of trophies, including a Top 10 place and Best Engine Bay at this year’s Easternats. We laid eyes on the LC at the All Holden Day in Flemington; it wasn’t hard to find. Nearly everyone we spoke to pointed us in the Torrie’s direction: “Go and check out that green LC; you won’t be disappointed,” they said. 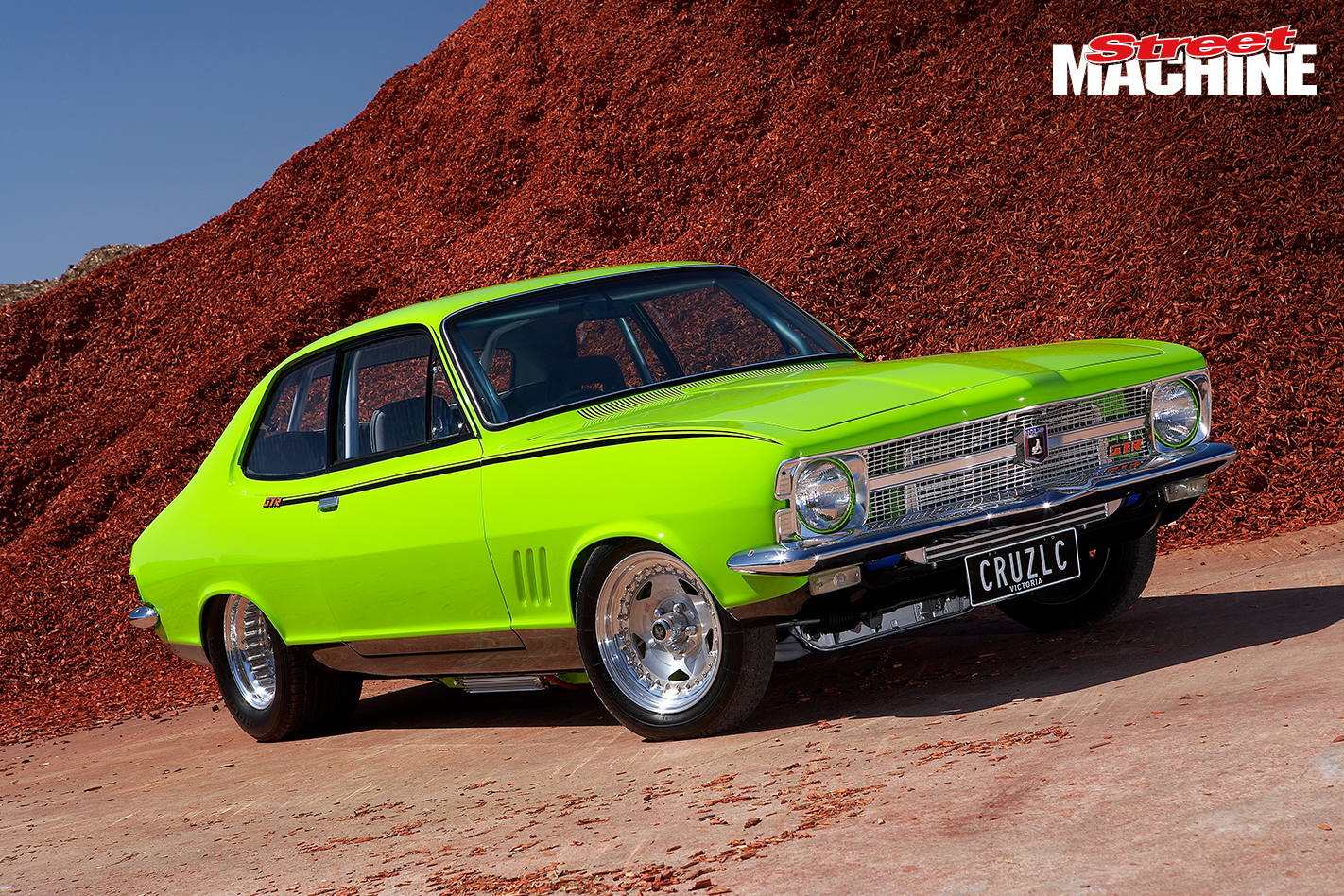 Damien applied the ‘less is more’ philosophy to the Torana. There’s nothing outrageous — its draw card is really how uncluttered yet sharp the finish is. The five-litre’s engine bay is the ultimate example: the only colour to be seen is the glowing green panel work. Everything else is silver or polished alloy. 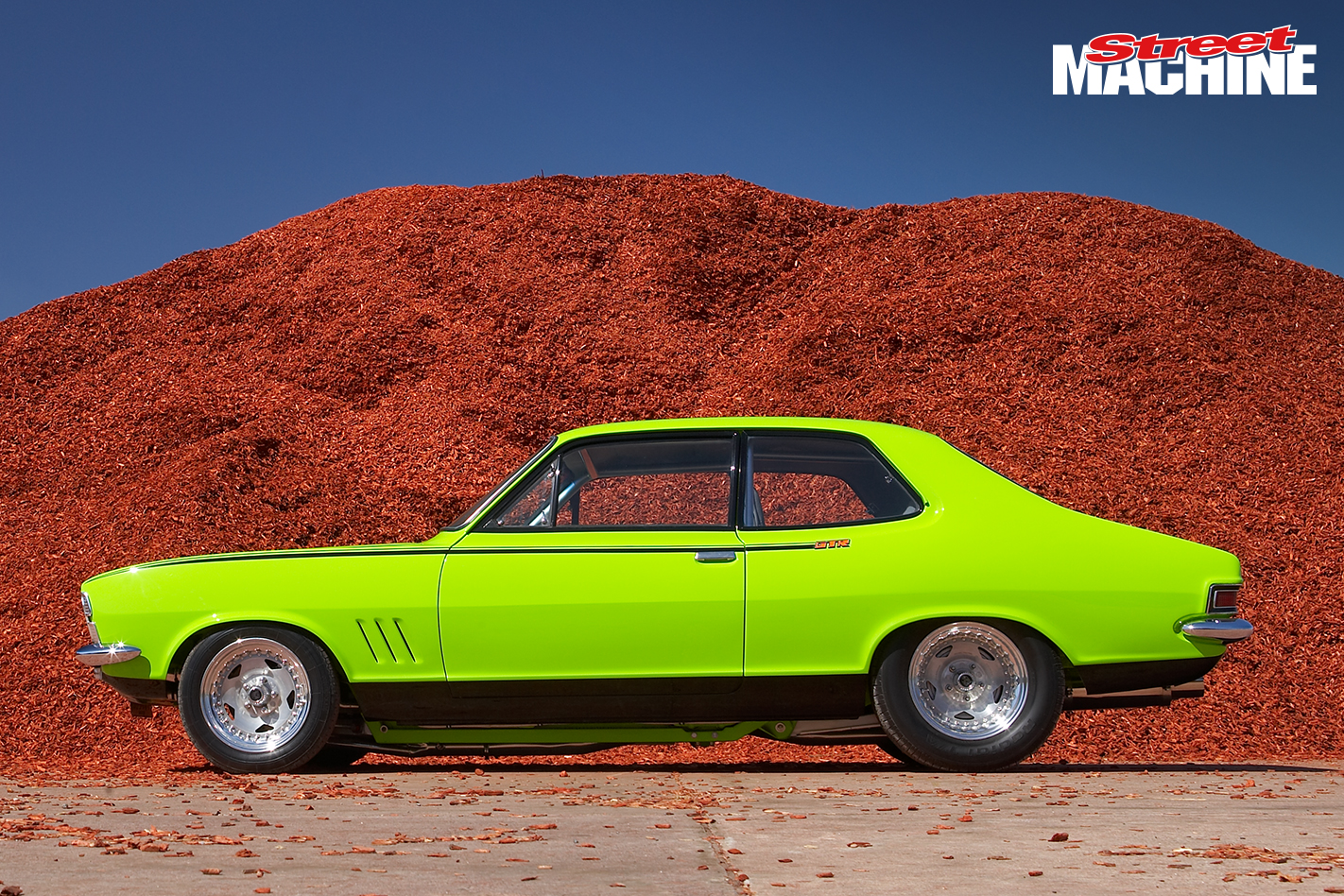 Damien has built around 30 cars over the years but more recently he has taken time out to work on his own projects instead. “The spanners only turn on the weekends now. Keeping it more of a part-time hobby rather than a job is the only way to really enjoy it. I tend to just work on one car per year,” he says. “I’ve owned this car for a bit more than15 years. It did well at the shows in the past but it was a stroker six back then.

“I was so busy working on other cars that it sat in the garage for five years without being touched. Then last January I decided to get stuck into it again and had it on the road in less than 12 months. The engine and rollcage were originally green so that’s now updated to silver. I like things plain — the factory look, you know.” 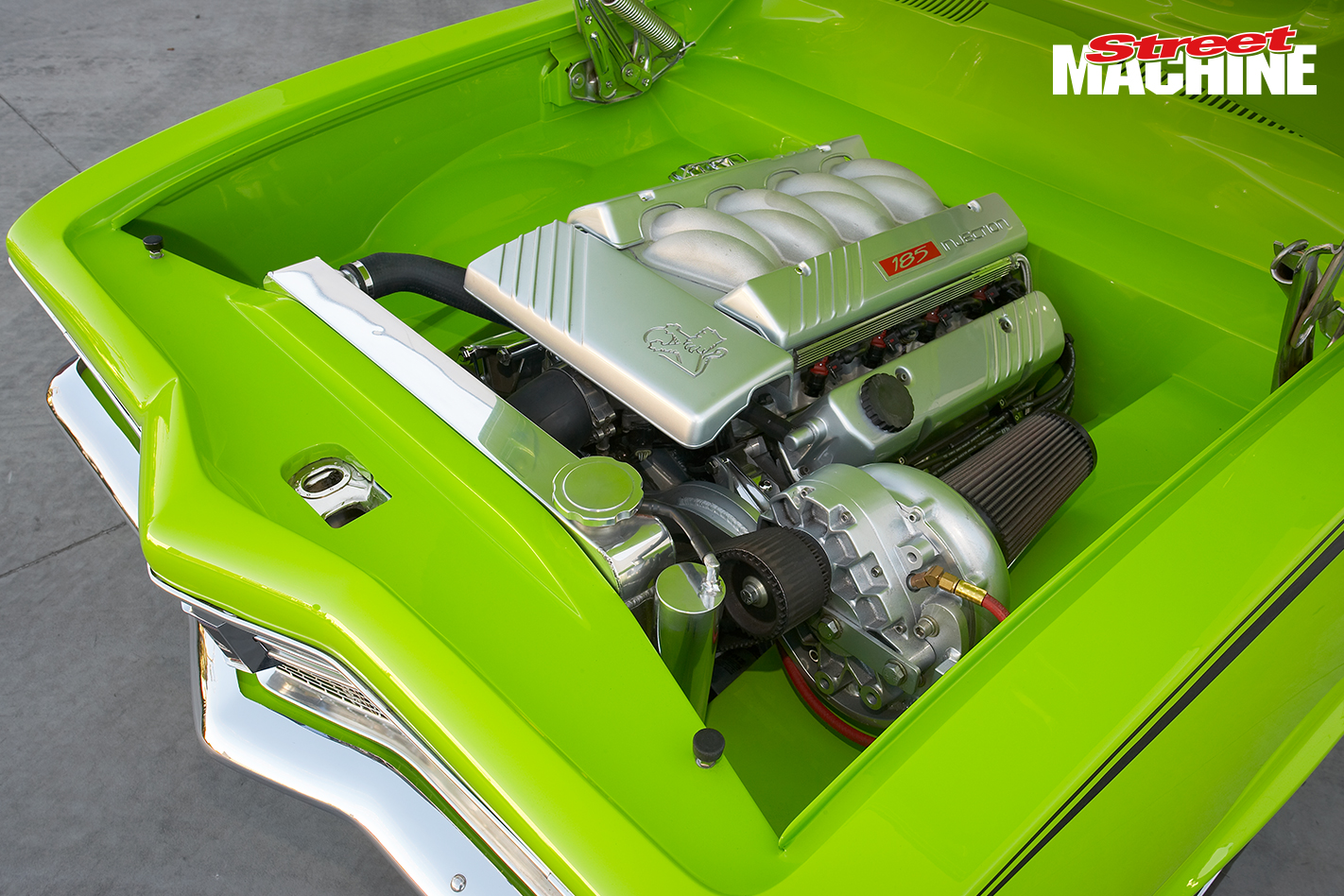 The 304-cuber was built for reliability rather than outright power. Damien screwed her together himself, with downstairs goodies including a balanced Holden crank and rods. ACL slugs and rings fill the bores, while the idle is dictated by a COME cam. Damien also ported the heads and filled them with stainless valves and Isky springs. The blower is a Vortech V2 unit with a Gilmer belt-drive. Releasing boost pressure on light throttle is a Turbosmart blow-off valve. 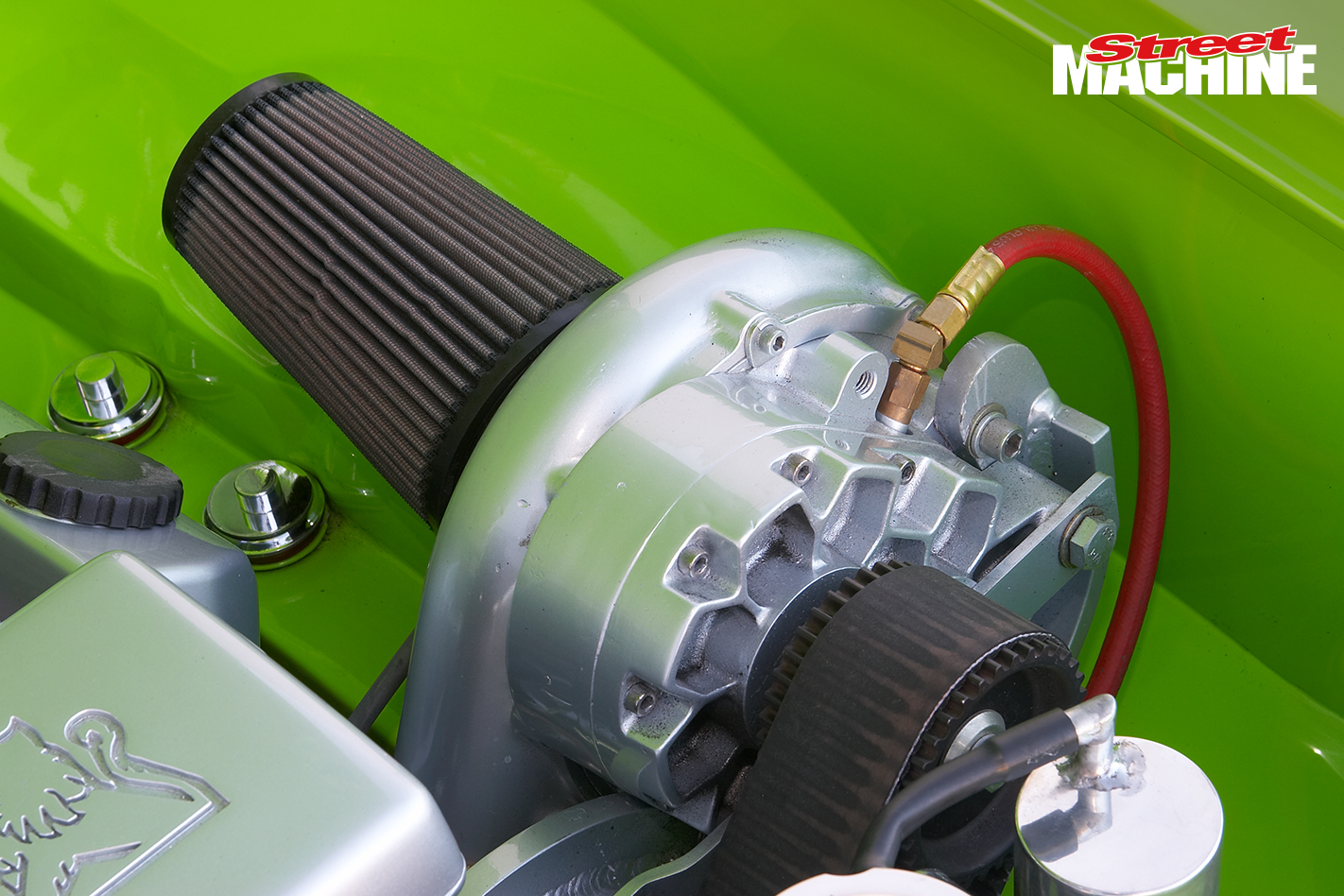 Damien admits that cooling the engine was an issue due to the big intercooler filling the front. The solution was an alloy three-core radiator complete with triple thermo fans. 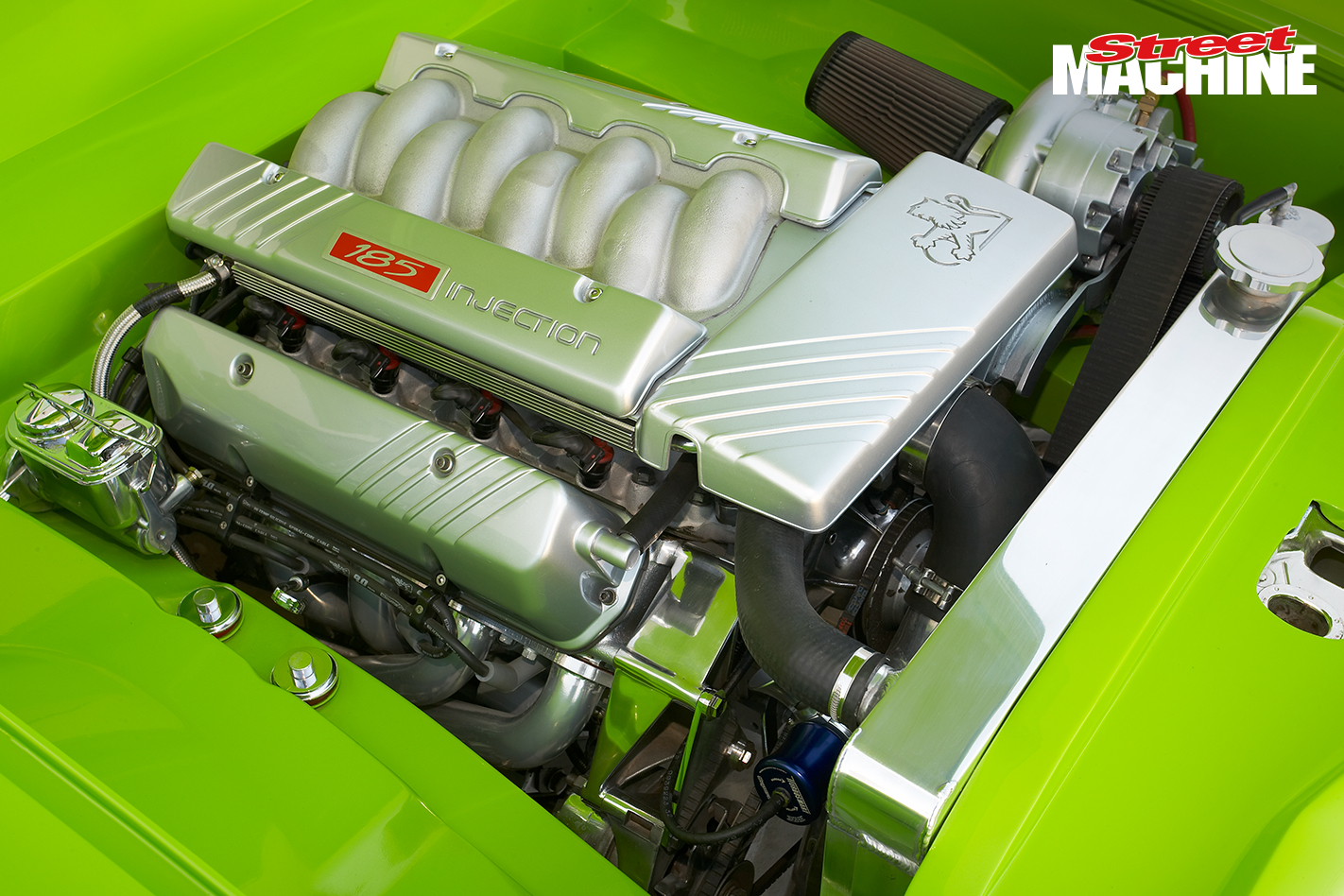 Even the exhaust is tucked away; for the record, custom four-into-one extractors feed a twin three-inch system and stainless mufflers. “The engine bay is all customised. The radiator was moved forward 30mm for supercharger belt clearance. The radiator, intercooler, pipe-work and all exhaust work are HPC-coated. She shouldn’t have any overheating worries now.” 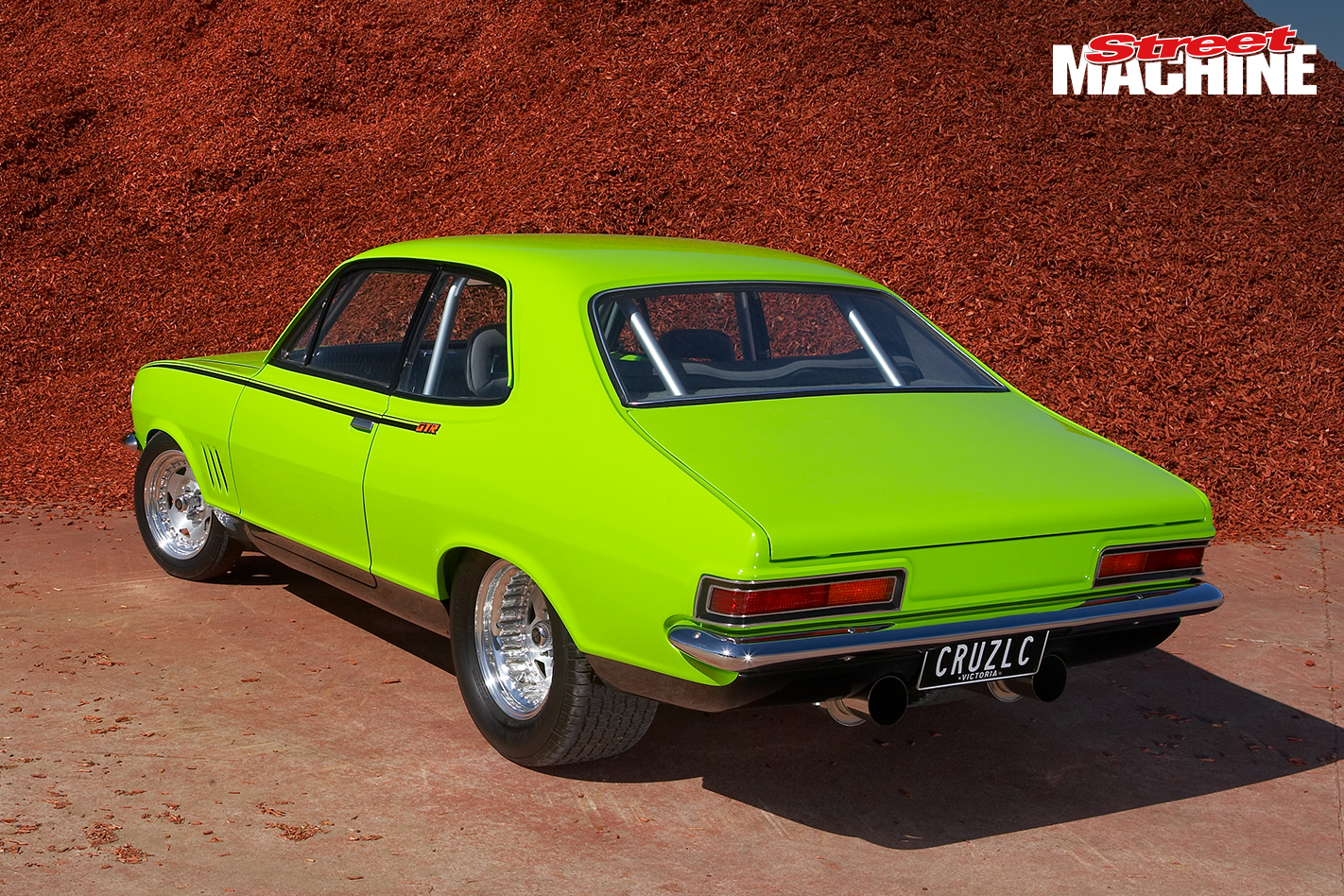 So apart from the hidden wiring, where the hell is everything? “Everything you can’t see — including the brake booster — is under the dash,” says Damien. The V8 conversion required a major boost to the fuel system. A pair of 700hp Bosch pumps feed 32lb/hr

injectors and commands are given by a remapped Delco ECU. Modified HEI coils provide the sparks. Damien is yet to strap the car onto the rollers for a power run and final tune but early indications show 600hp at the crank is looking good. 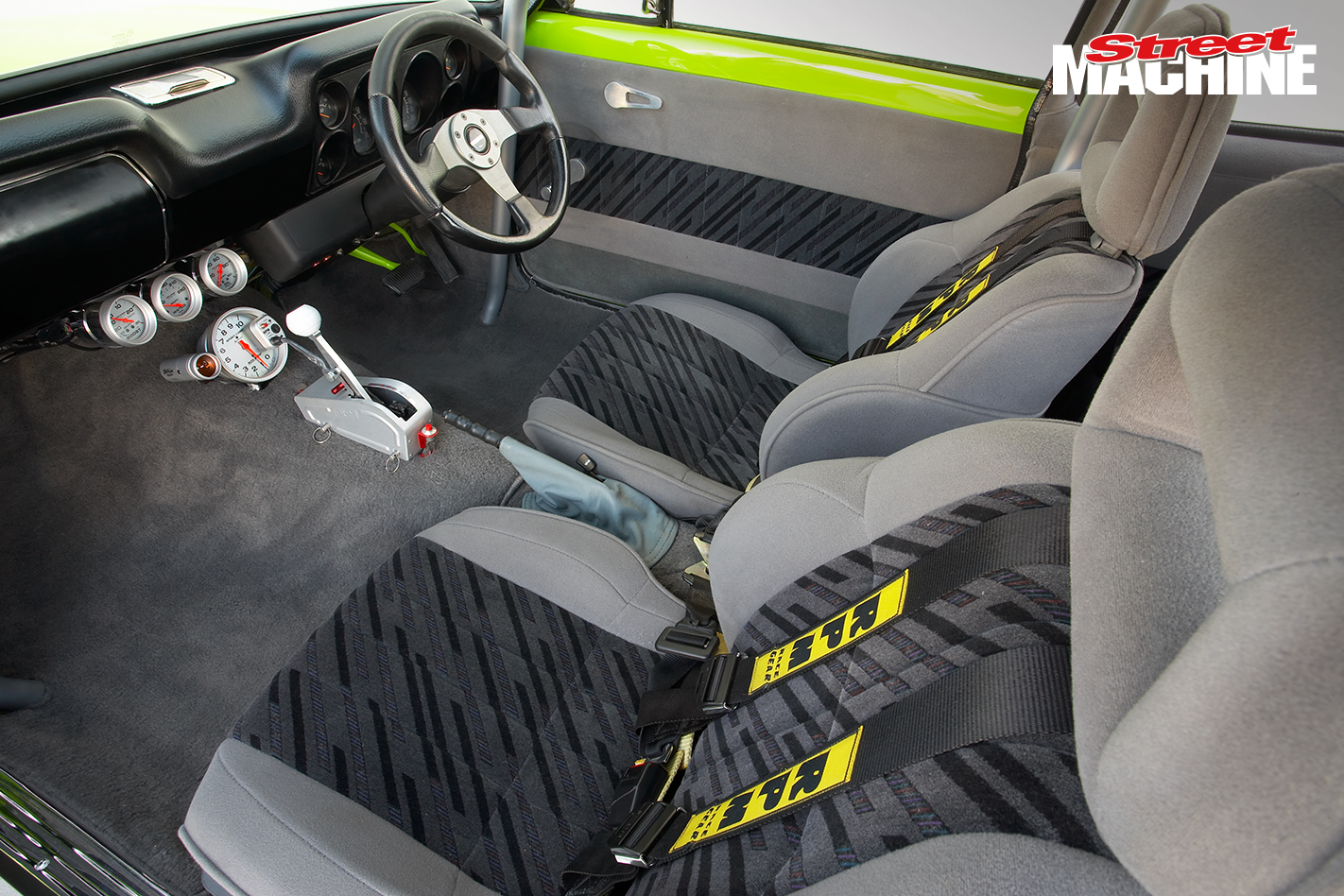 Backing the blown five-litre is a fully manualised T400 tranny twisting a nine-inch locker. A 2500rpm stall converter retains street drivability. The trans tunnel needed modifying for clearance and while that was being sorted, Damien added chassis connectors to the body.

“I’m going to run the show scene for a while and sort the car out. I’m still running-in the engine at the moment but it’ll get a full-power tune soon. I’m not really into the street drags — I prefer the nostalgia meetings — so next year should see the car hit the track for some fun,” he says. 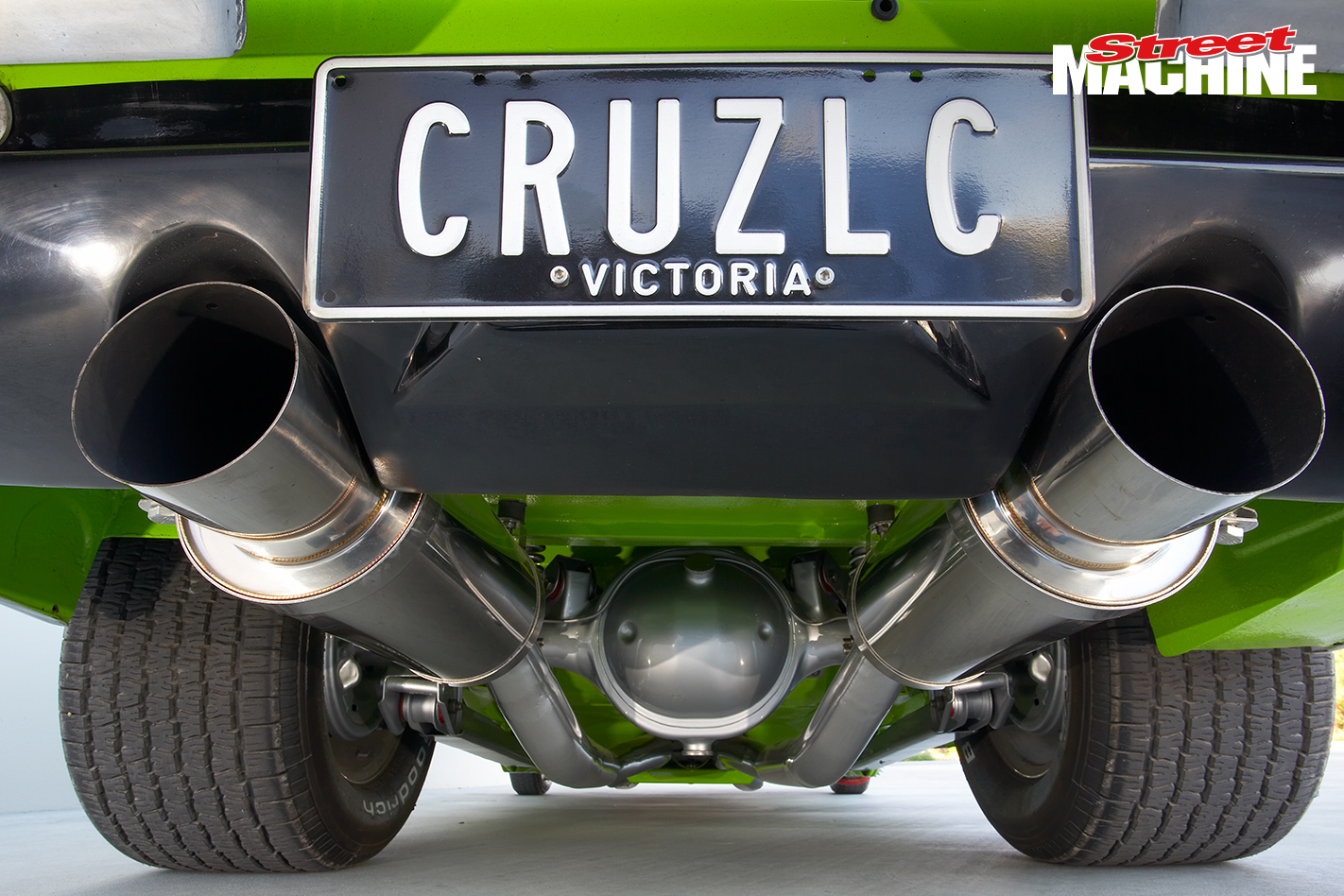 Poke your head under the belly and you’ll see it’s spick-and-span, just like the top. “The mini-tubs were done by John Taverna Chassis. While it was there, the guys also lengthened the wheelarches by 3.5 inches. The whole body was seam-welded too,” Damien says.

Stuffed inside those tubs is a set of 15x8.5 Convo Pros, shod in 295mm BF Goodrich rubber. The fronts are four-inchers and wear 135 Michelin radials. 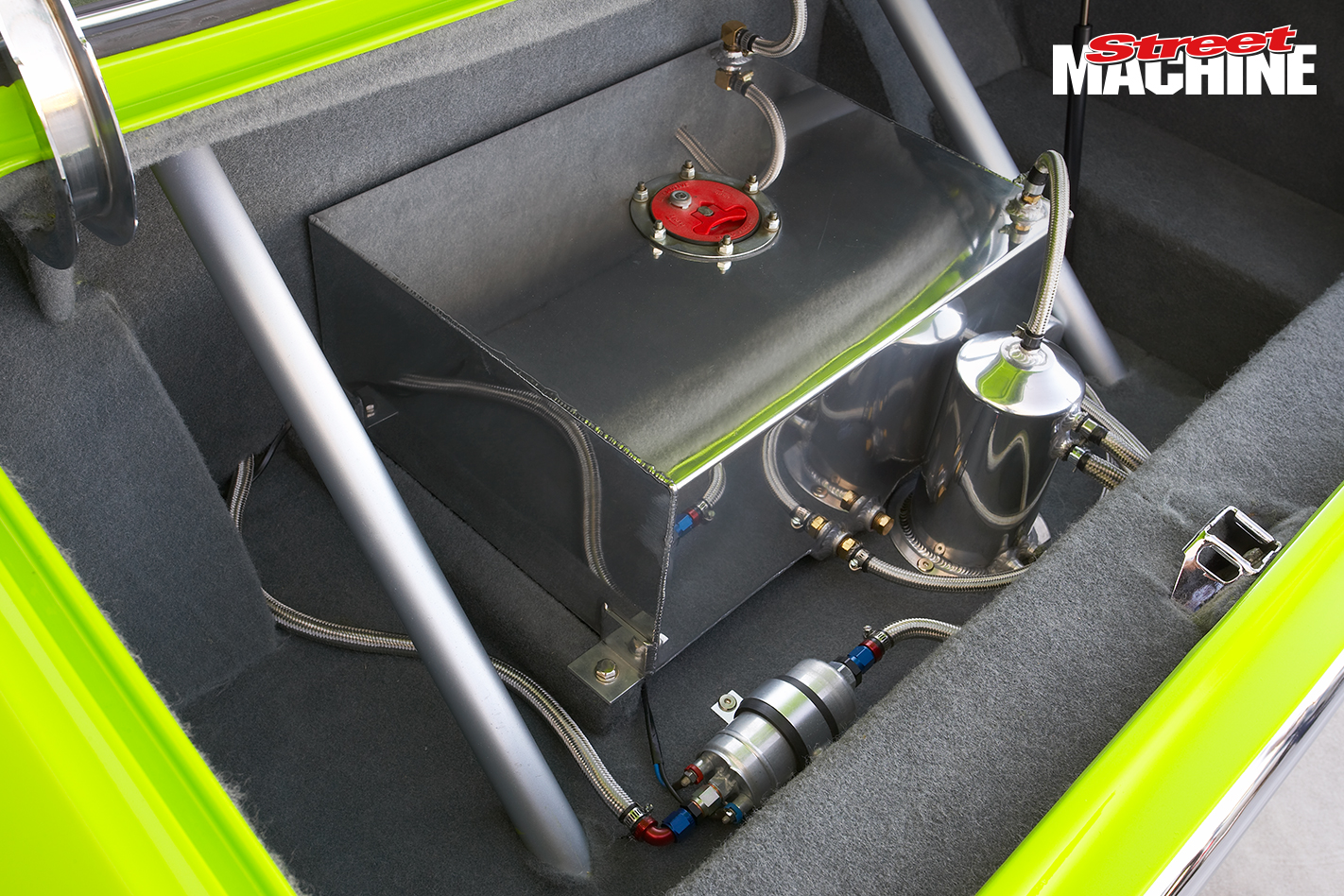 Creating the ground-hugging look are Pedders shocks up front and Spax coil-overs at the rear. Urethane bushes are fitted throughout, while rack and pinion steering takes care of the pointing. Damien adapted a Leyland front brake kit with HQ calipers, remote booster and master cylinder — something else that lurks under the dash. The rear end is held by HQ drums.

Starting with a good body from his previous build was handy but the LC wasn’t always so good. “It was run down when I bought it,” he says. “I had to fit new quarters, sills and a front valance panel before I could even start.” 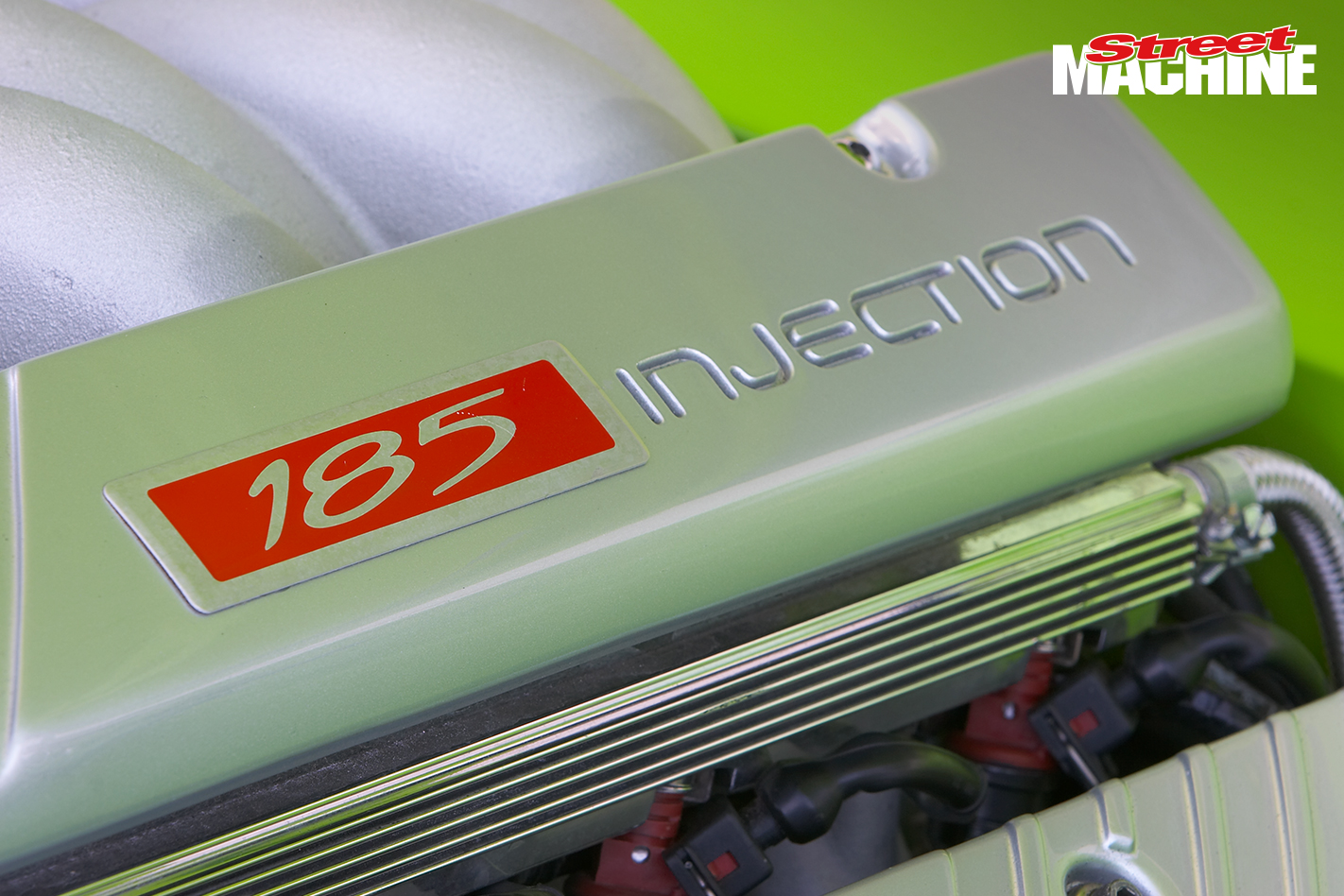 Damien resprayed the car in custom Dulux green himself, and it leaps out at you it’s that bright. “I wanted it looking clean,” he says, “so there are no door locks, boot lock or fuel filler. I’ve hidden a lot of stuff in the boot as well. The door handles are billet. Every bolt on the car is either polished or stainless and all the brake and fuel lines are braided.” 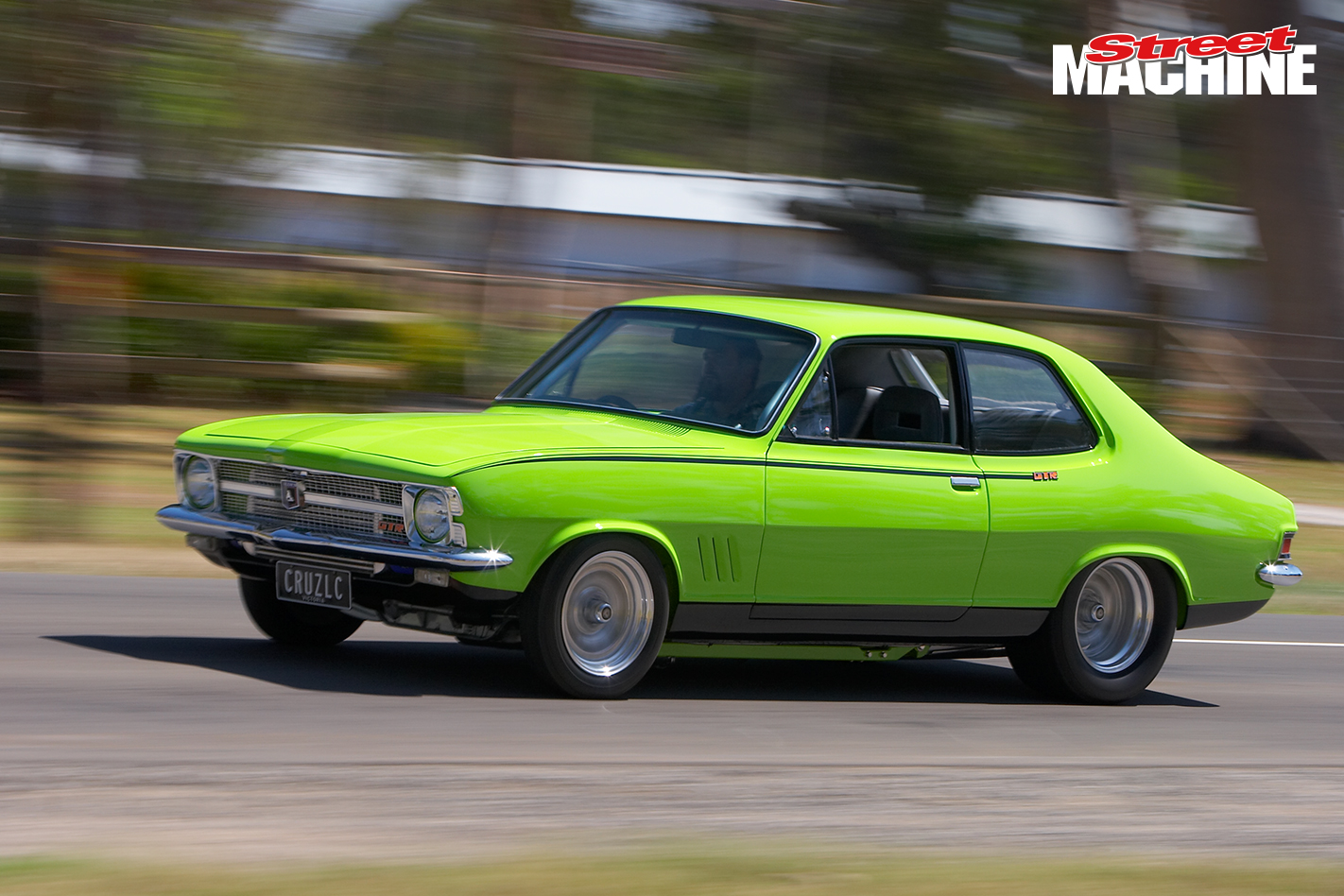 Interior appointments are in a similar vein. No fancy leather and billet, just functional and neat Japanese seats retrimmed — along with the door cards — in grey velour, by Road Runner Trimmers. A 12-point chrome-moly ’cage extends the silver highlights right through the car.

“It drives beautifully and cruises like a stock engine. The blower is always making boost but it doesn’t make a heap of it until you plant it. It’s on 14psi at the minute but I’ve got room to step that up; that’s why I fitted the intercooler. It’ll get good traction in first but once it’s into second it can be a handful!”