ONE of the world’s most beloved cars, the VW Beetle was churned out in huge numbers at factories all around the world. They were built Down Under for more than 20 years, production ending in 1976. You might not have owned one but it’s a fair bet a close relative did.

The Bug’s simple design and legendary reliability mean you’re more likely to see one these days than a Gemini or early Corolla. There’s an air-cooled engine tucked under the butt and not much else to worry about – not even a radiator. In short, Beetles are perfect street machine learner projects.

Just ask brothers Luke and Jamie Swift, who own these brilliant Beetles. Unlike many Bug-nuts whose birthdays align with their cars’ compliance plates, these two blokes are decades younger than the rides they cruise in. 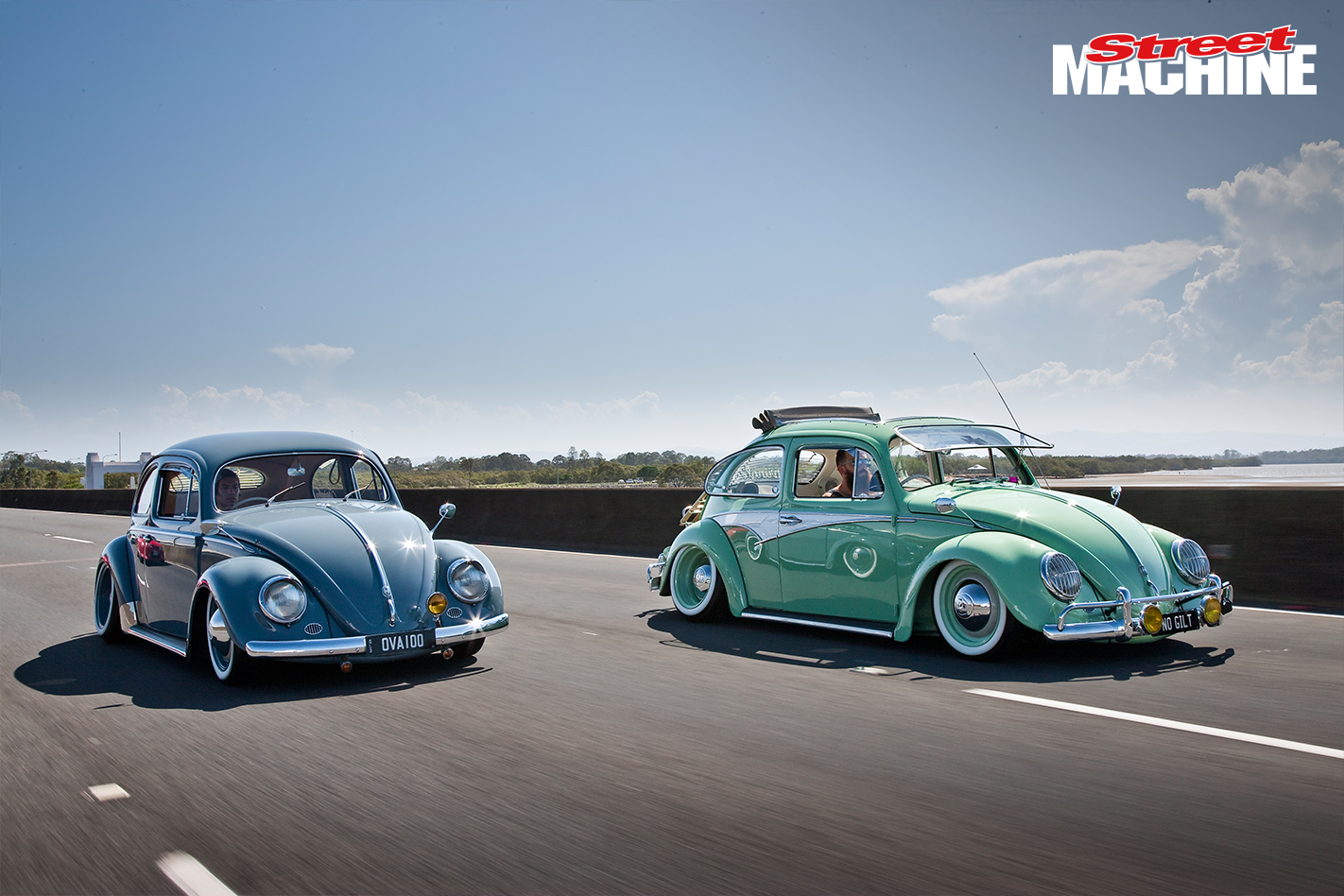 Jamie’s green ’67 Beetle is the more modified of the pair and came about more or less by accident. While collecting parts for his HR Holden project, dad Glenn – a car nut with a swag of cool Holdens as well as a Beetle – spotted a forlorn VW in the corner of a panel shop in the NSW coast town of Mullumbimby. He reported his find to Jamie, who was looking for a relaxing project after a couple of hectic Commodores.

“Under the crap and dust, Dad thought he could see a good, sturdy original car,” Jamie says. “He reckoned it looked pretty solid.”

Once it was dragged out and onto a trailer, though, things weren’t quite so rosy. 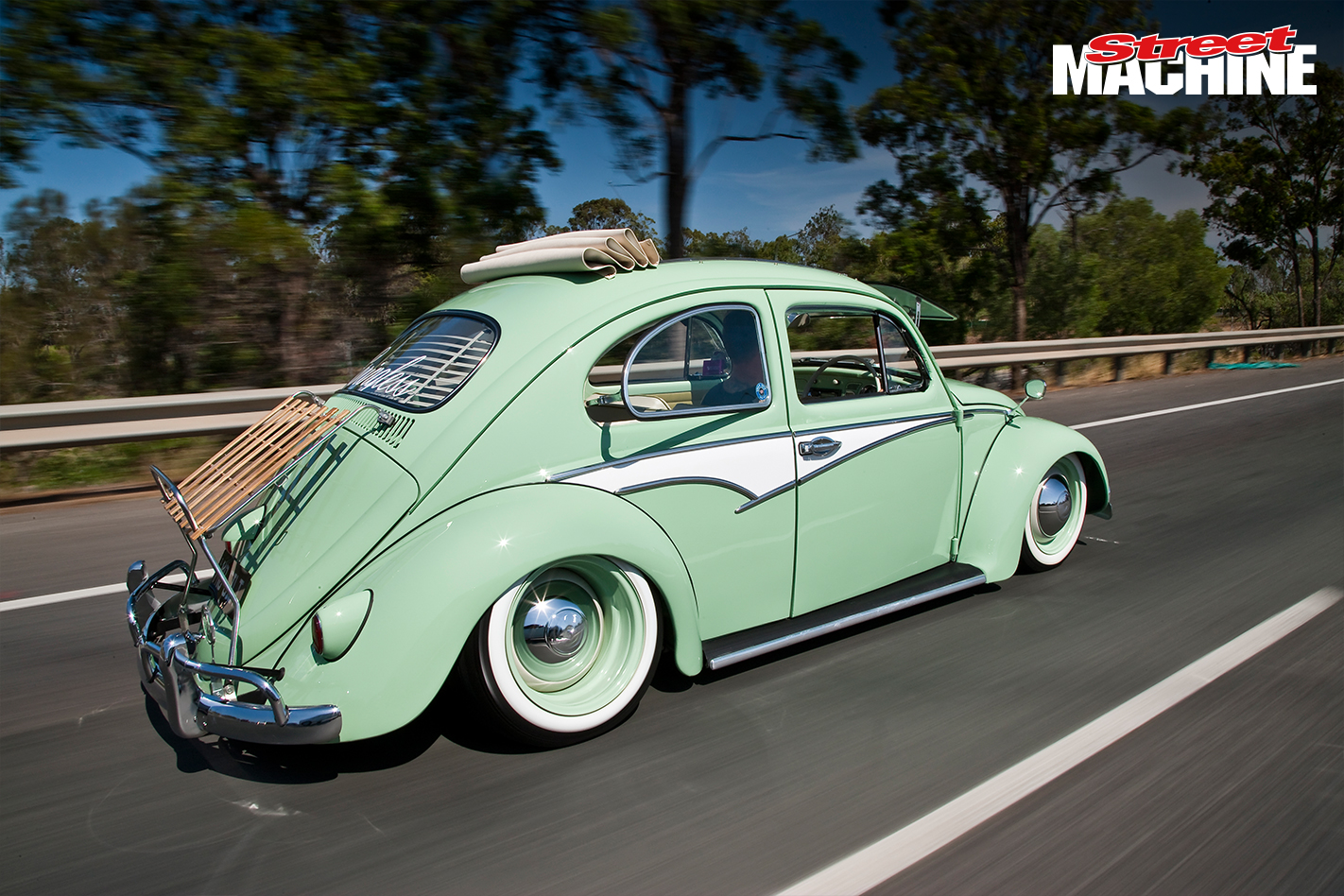 “The engine was shagged and the paint wasn’t as nice as we’d hoped,” Jamie says. “One guard was a different colour and it got worse the more we looked at it. One door was missing, there were no bumpers, the engine was out – I didn’t want to take it.”

But a discount deal was done and the dak-dak was delivered. At home, the situation began to look more positive after stripping the old interior and giving the car a thorough hose-down.

“My first idea was to rat-rod it – restored interior, mint engine bay, but slammed and ratty on the outside,” Jamie says. “But once we’d painted inside the doors and the dash, I changed my mind. I loved the colour. It was: ‘Okay, let’s do the whole car!’” 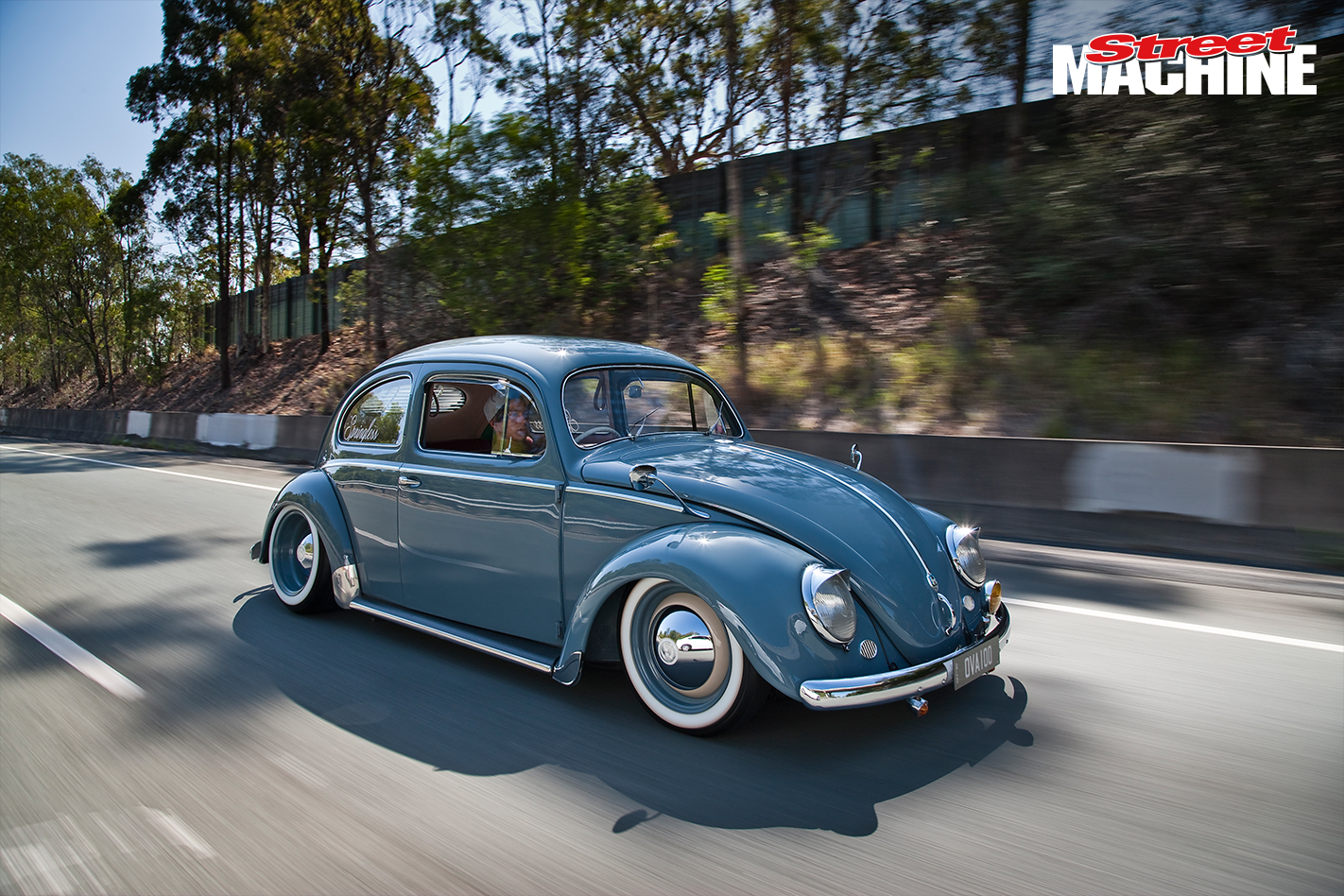 Good call – patina can be cool but most of those survivor cars deserve to be shiny and pretty again.

Rust-wise, VWs often suffer under the cabin-mounted battery, but the ’67’s sturdy floor meant Jamie was able to leave the body on the chassis and refurbish the floor with a coat of KBS. That saved plenty of time in the car’s six-month, mostly at-home build.

But stripping the exterior revealed the driver-side rear quarter was basically bog – a common repair when these cars were borderline worthless. “It took some work and shrinking to get it right,” Jamie says. 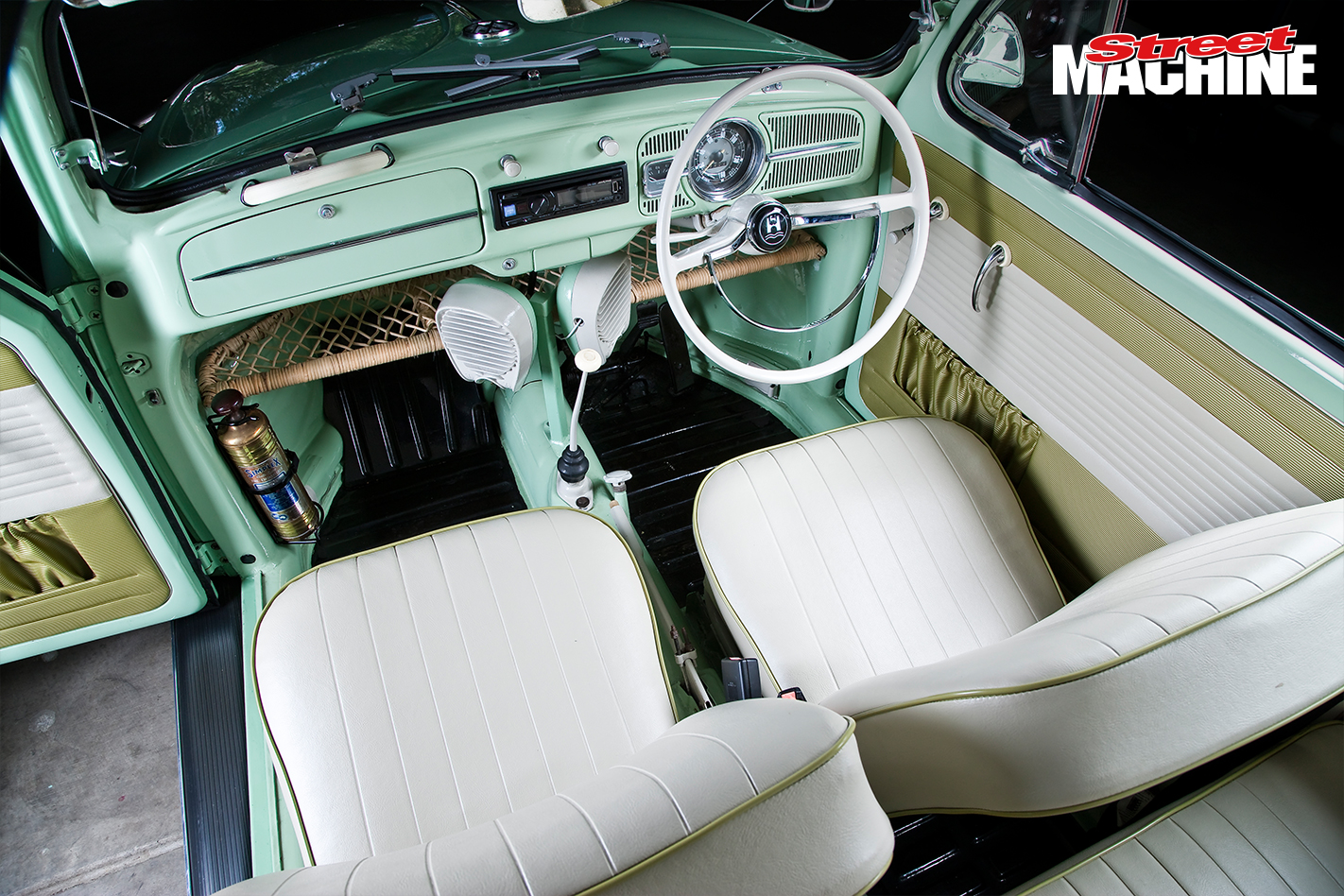 The colour is the car’s original, applied in DeBeer two-pack by cousin Troy Swift in a hired booth, after panel prep and primer were performed at home. The minty Birch Green looks joyful, especially with the off-white flash on each side.

Although there was a factory ragtop option, Jamie’s is an aftermarket unit from UK mob Paris Beetles. It’s a brave man who decides to perform a no-going-back modification like this.

“The roof was perfect,” Jamie admits, “so I copped a bit of crap. But it’s not rare, like an original split-window Beetle or a GT Falcon. But even after the roof arrived, it took me a while to decide if I wanted to install it or not.” 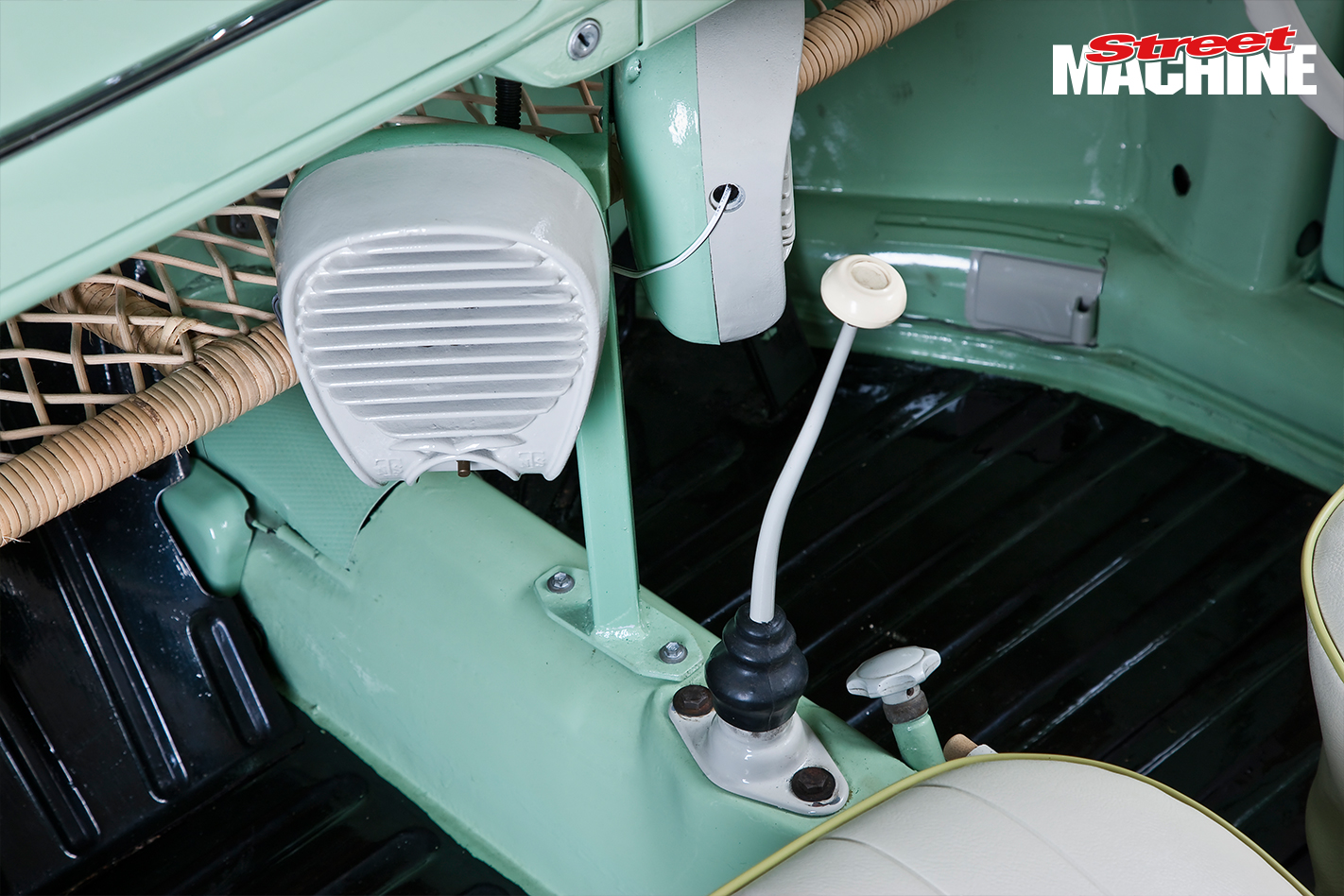 Outrage Trimming complemented the sunroof with a new headlining. The standard-style trim set is from US-based specialist TMI, in a custom pea-green and white combo. There’s an under-dash wicker parcel shelf and a pair of old drive-in speakers fed frequencies from an Alpine head unit. And that KBS-finished floor turned out so nicely, it was left exposed.

The original engine was a 1300cc but Jamie now rides with a bigger-bore twin-carb 1835cc built by family friend Mick Hanley. The transmission is the original four-speed transaxle with the ride height sliced heavily – though it can be manually raised on Monroe air shocks.

Simple as it is, Jamie enjoyed the process of building a cruiser after his big-grunt Commodores. 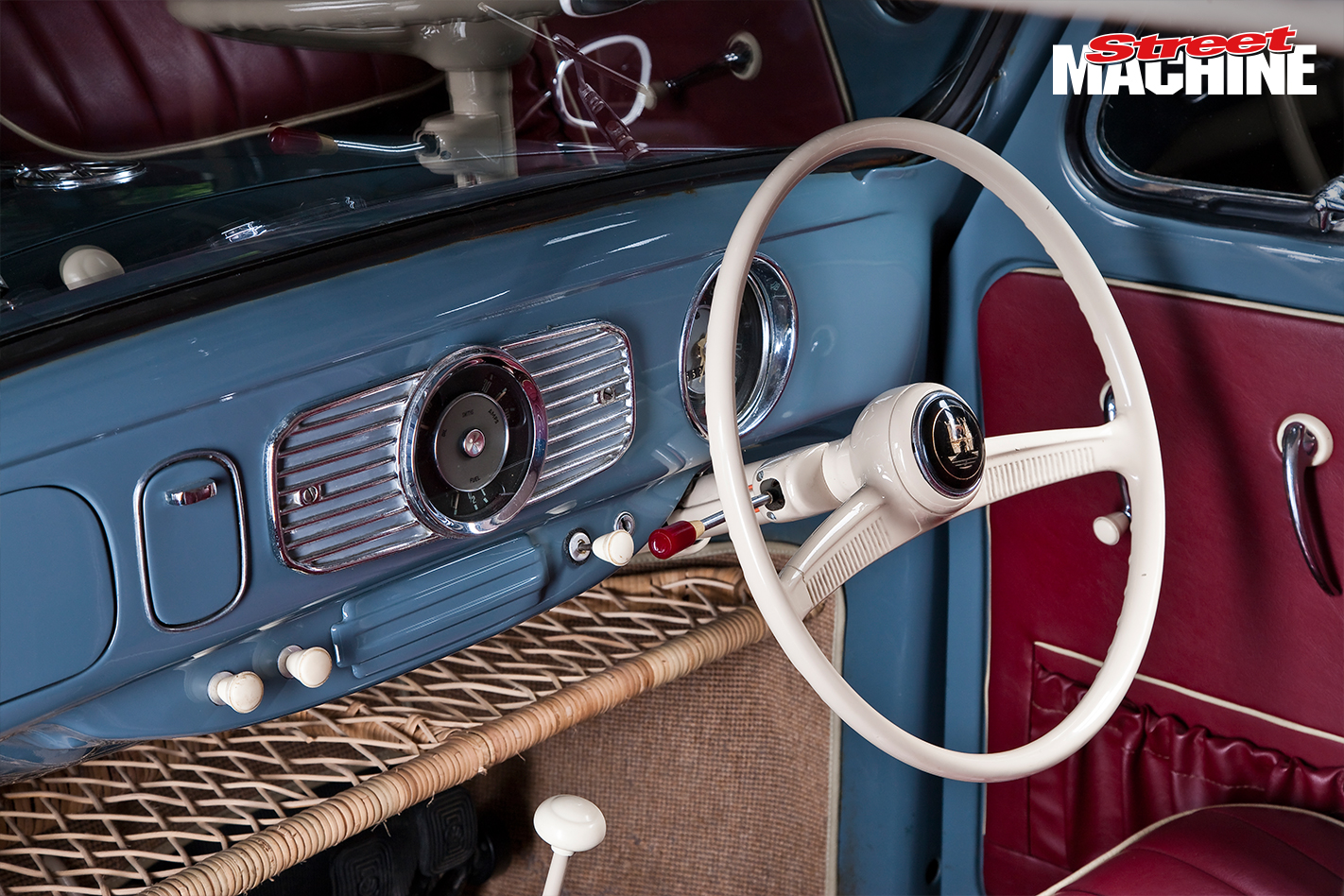 “After discovering how cheap these are to hot-rod, they are way underrated cars,” he says of the once-humble Vee Dub. “They’re easy to work on and you can get all the parts; it’s amazing how easily you can piece one together.”

And the response has been incredible: “No matter what you park beside, the VW just takes over. You get people hanging out of cars to say g’day. A few times I’ve had ladies – I reckon well into their 70s – pull up and say: ‘I learned to drive in one of those!’

“Maybe that’s the wrong age-group to be chatting up!” he adds with a laugh. 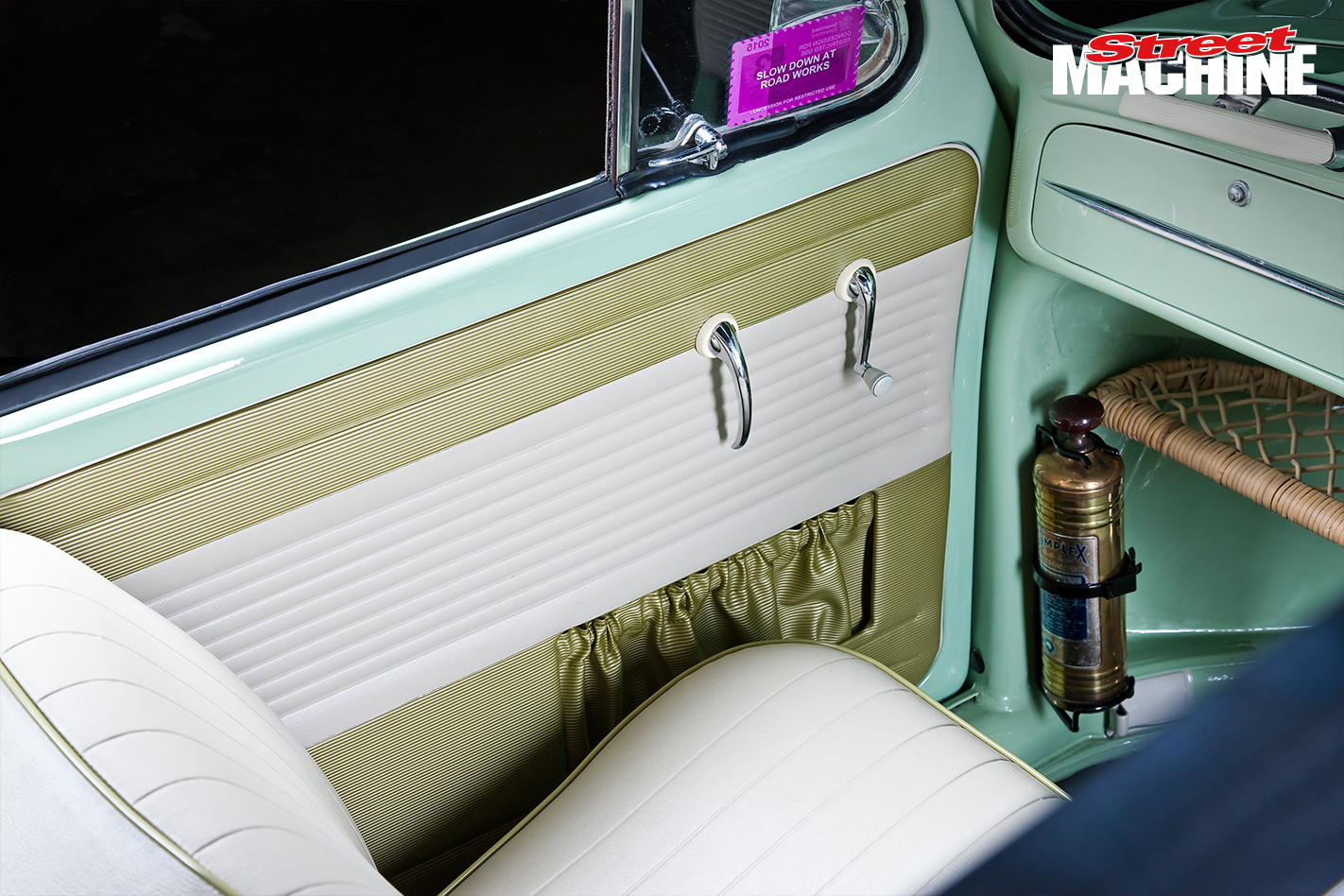 Over on the other side of the shed, younger brother Luke also gets around in a slammed Beetle – the two cars are usually cruised and presented at shows together.

Luke’s Beetle is an oval-window assembled from an imported German kit during the earliest days of Aussie VW production in 1956. It’s older, rarer and not surprisingly more original that Jamie’s ’67.

Luke’s also owned his Vee Dub longer, having bought it as a completely restored car from Tasmania. Its prior owner, a retired panel-man, did the work but was too scared to drive it. 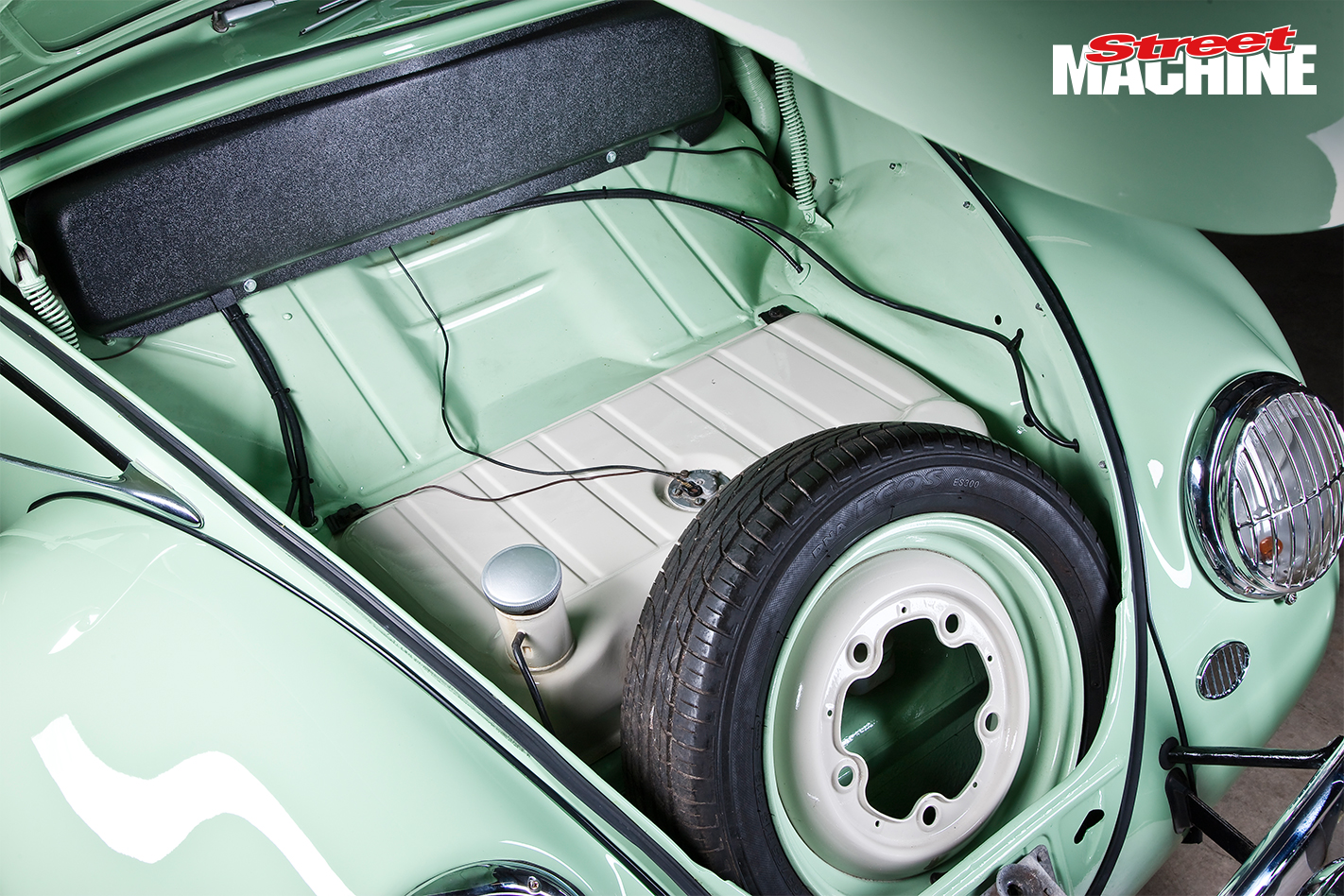 Mind you, the old fella probably never had this in mind when he sold it. Using the same hardware and smarts as Jamie, Luke’s Dove Blue oval has been slammed over its stock front and eight-inch rear rims.

Looks can be deceiving however, as Luke’s Beetle is still ‘powered’ by the original 1.2-litre, 36hp flat-four engine with antique 6V electric system. Shocked by the power? Those are flywheel ponies – it’s down to a more manageable 25 neddies at the treads. Don’t expect it to launch any time soon.

Luke’s stored all the original suspension bits so the classic can be returned to standard in an idle afternoon – a wise move, with Bugs becoming more collectable every day. One sardine-tin roof in the family is enough, it seems. 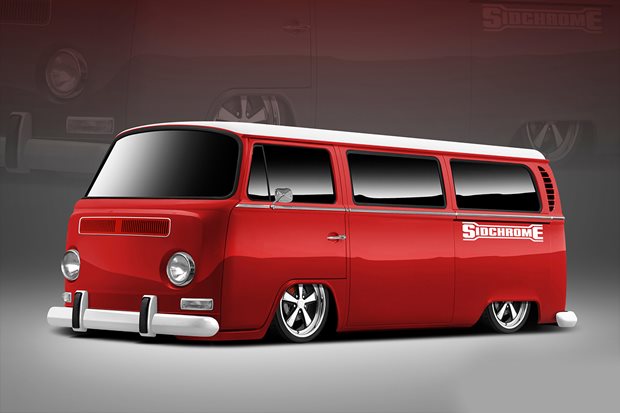 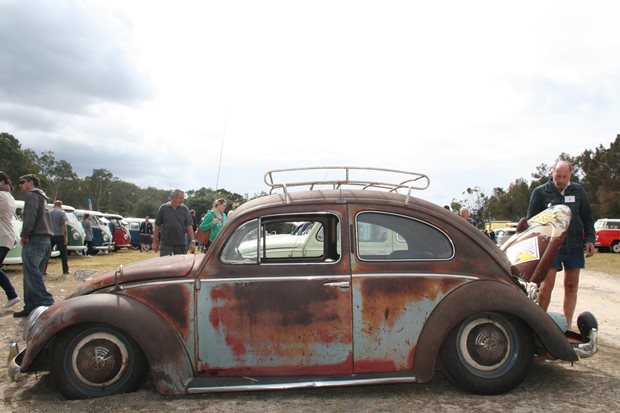 A veritable mecca for Volkswagen nuts, the bi-annual VW Spectacular at Nambucca Heads celebrated its 30th birthday in 2014 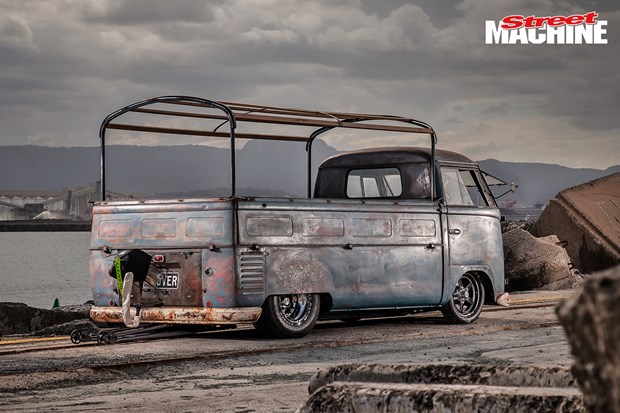 Sydney bloke Phil Mizzi is a latecomer to the world of Volkswagens, but he has set the online Kombi world alight with his ratty-looking ’54 single cab ute dubbed Grover 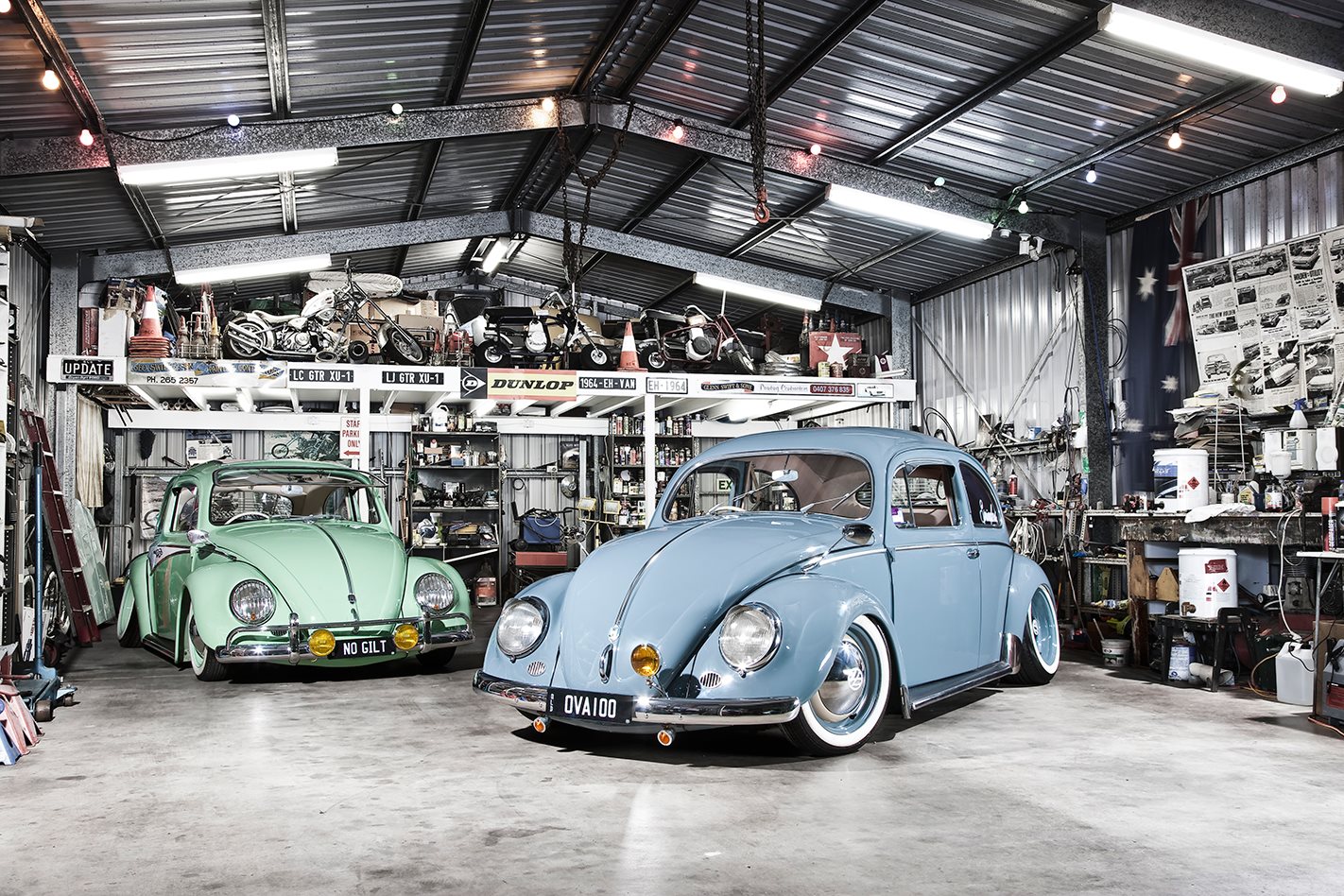 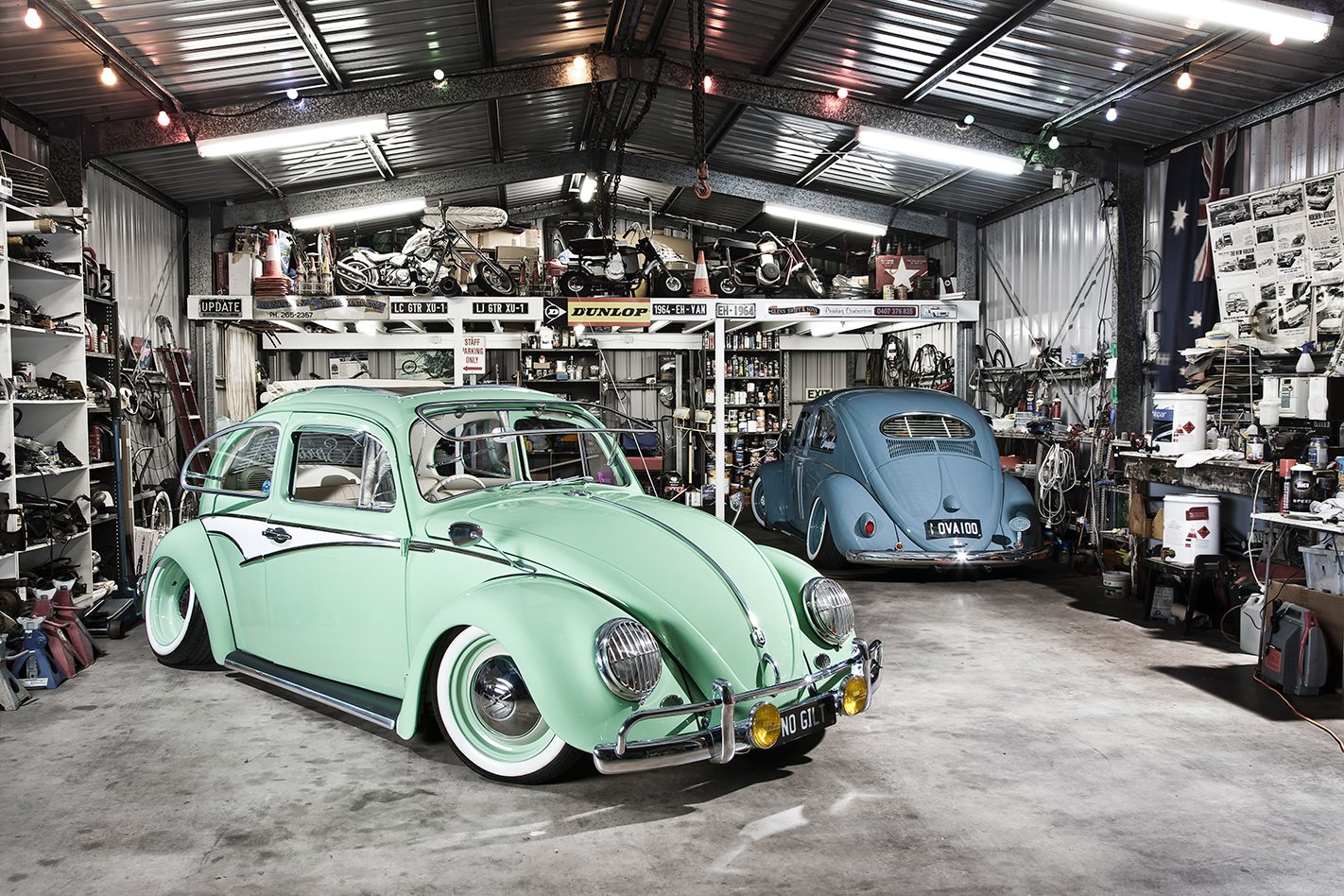 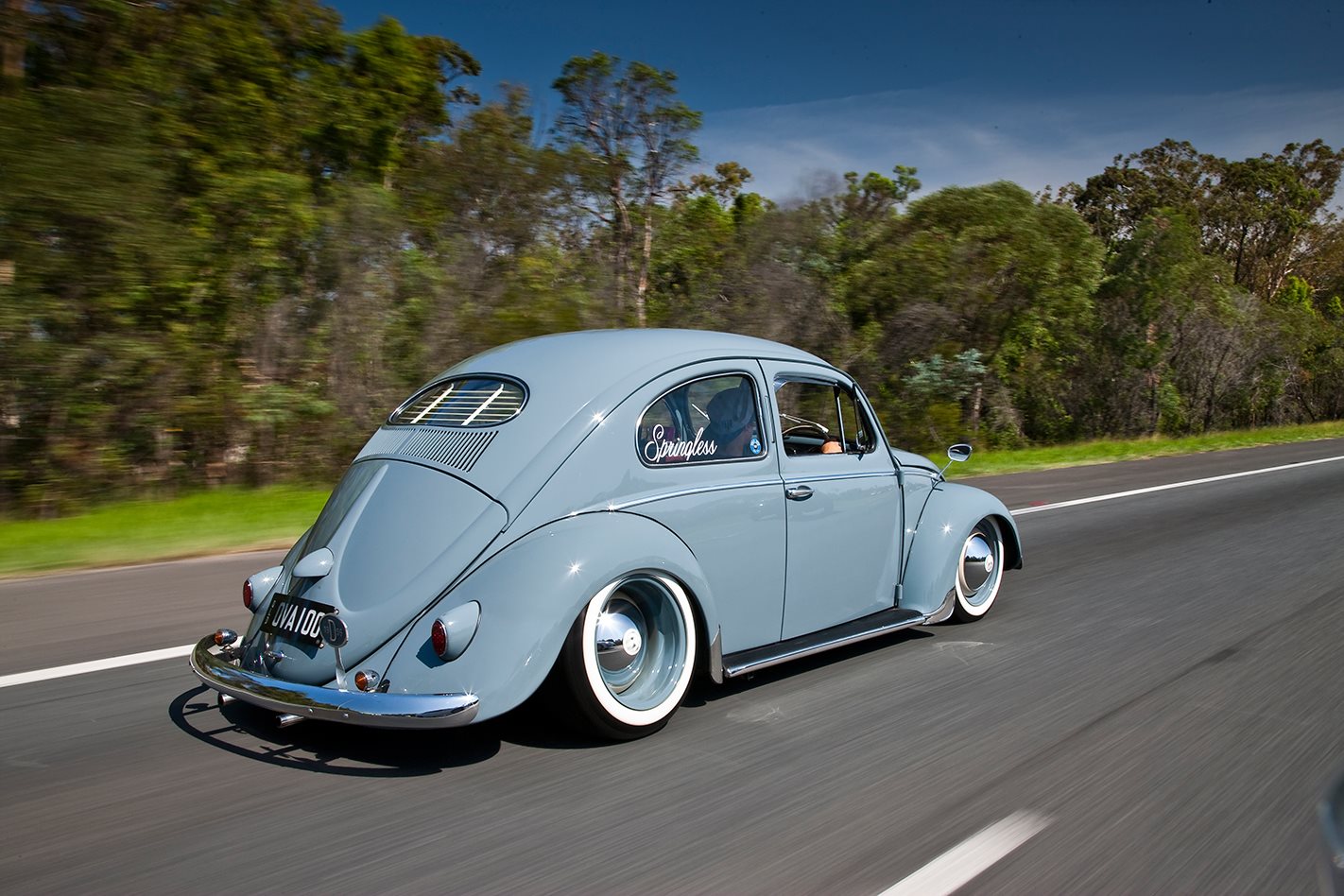 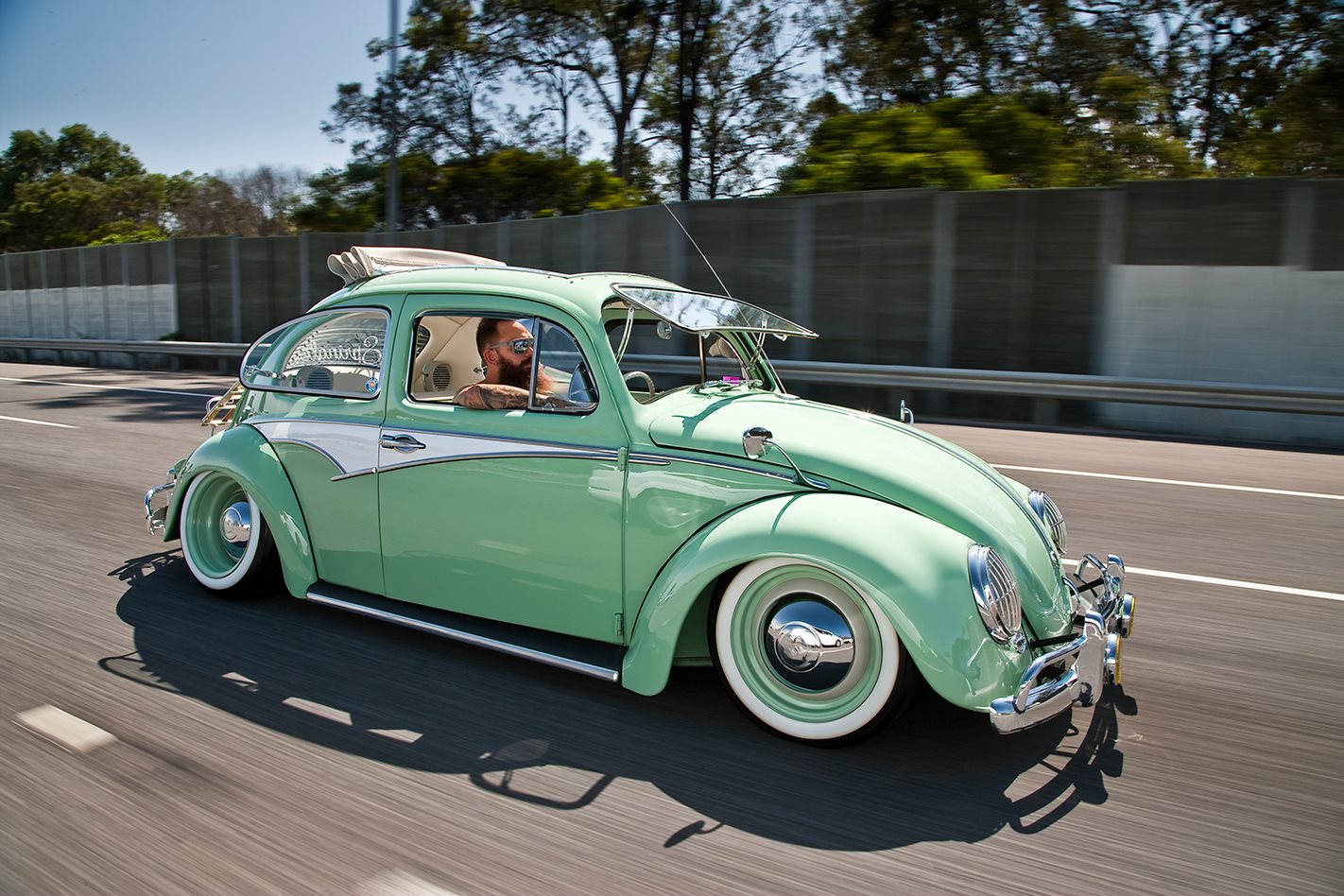 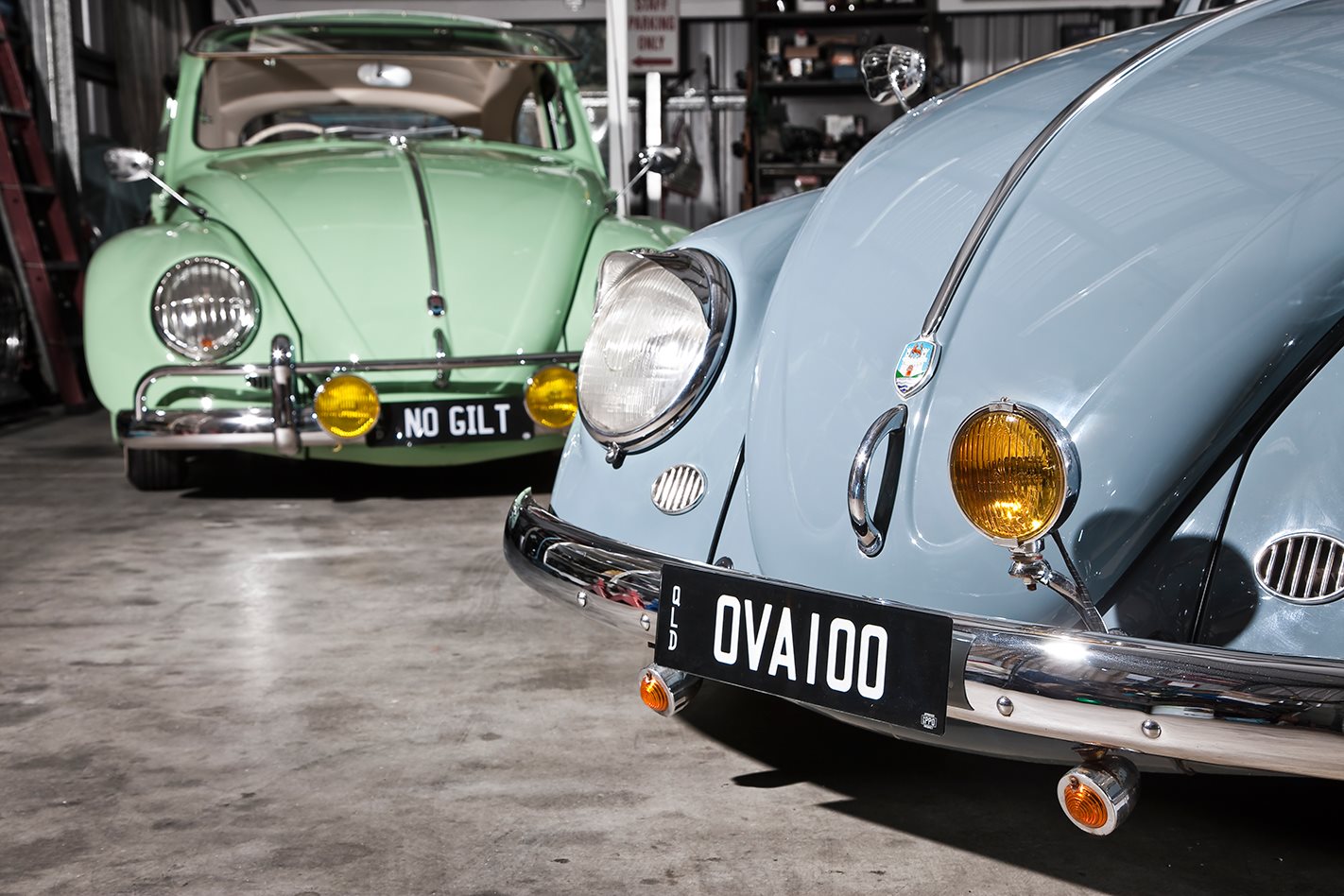 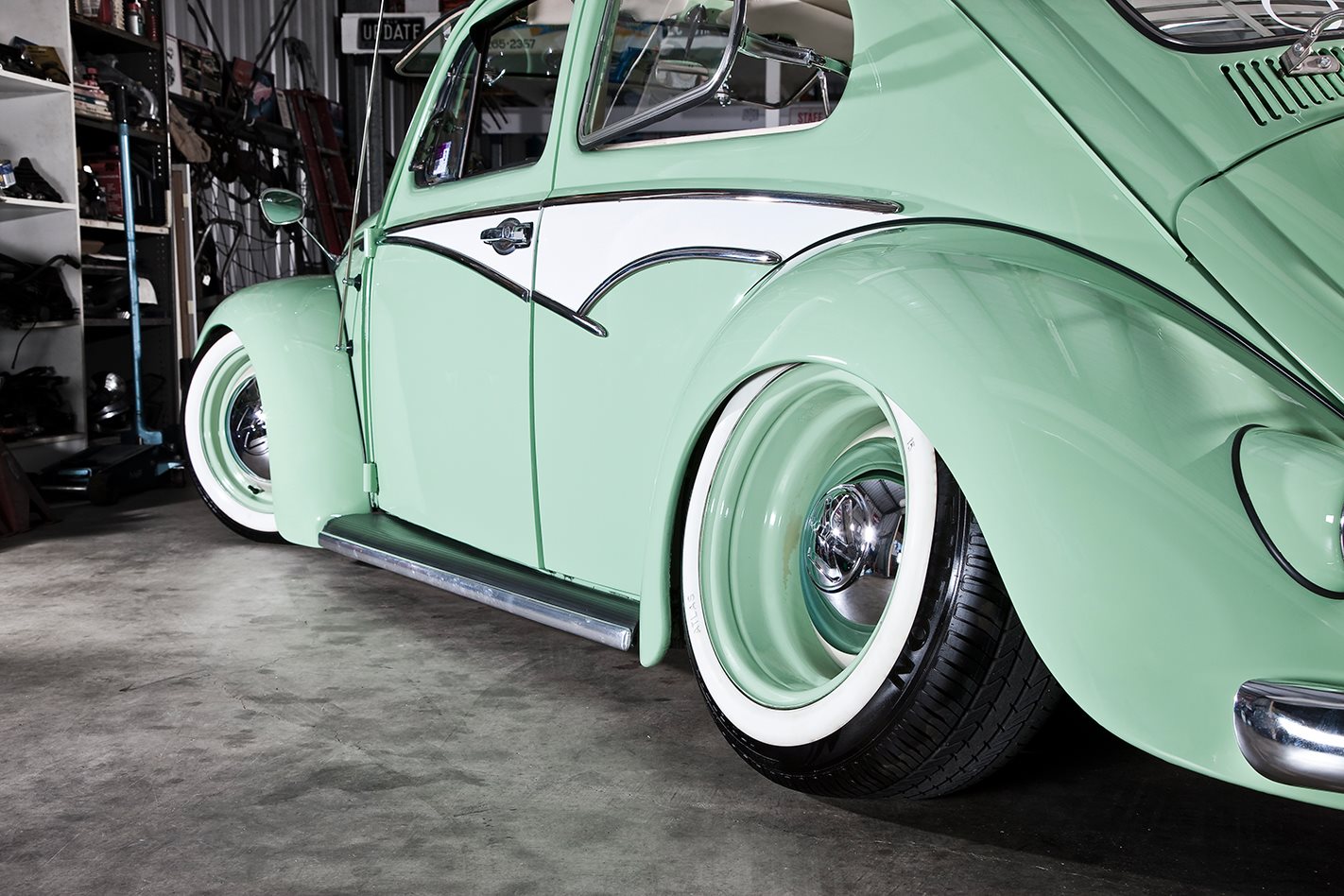 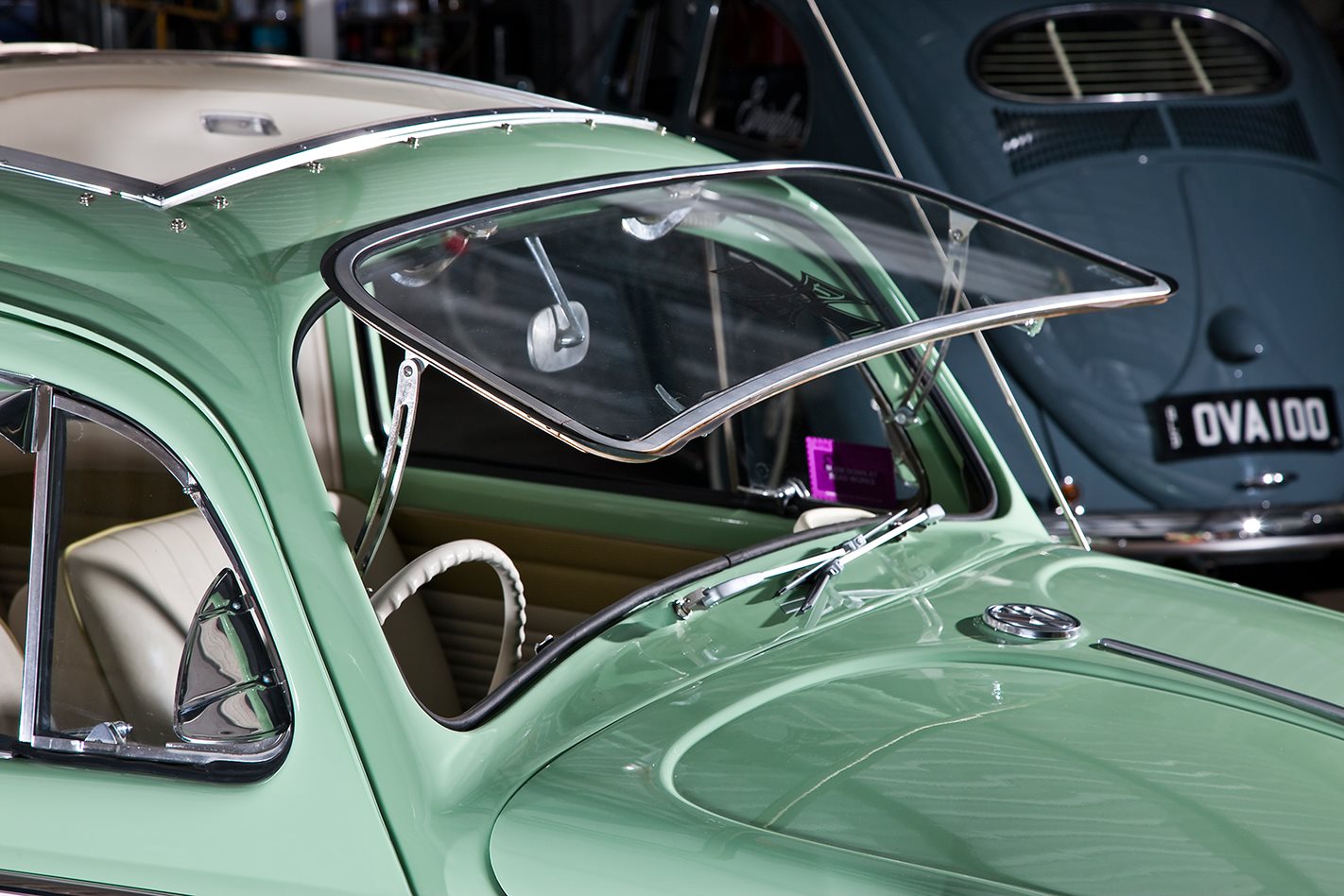 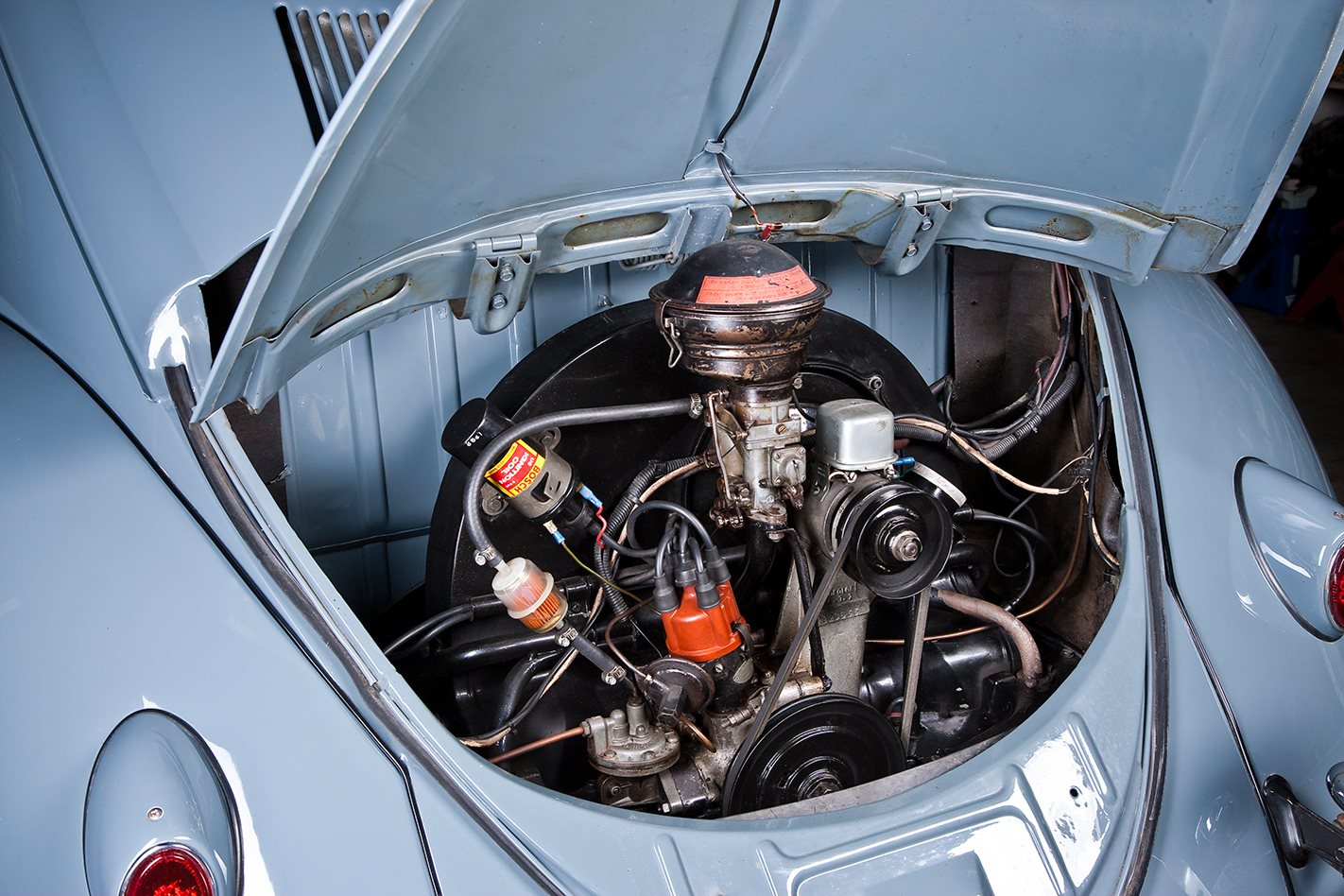 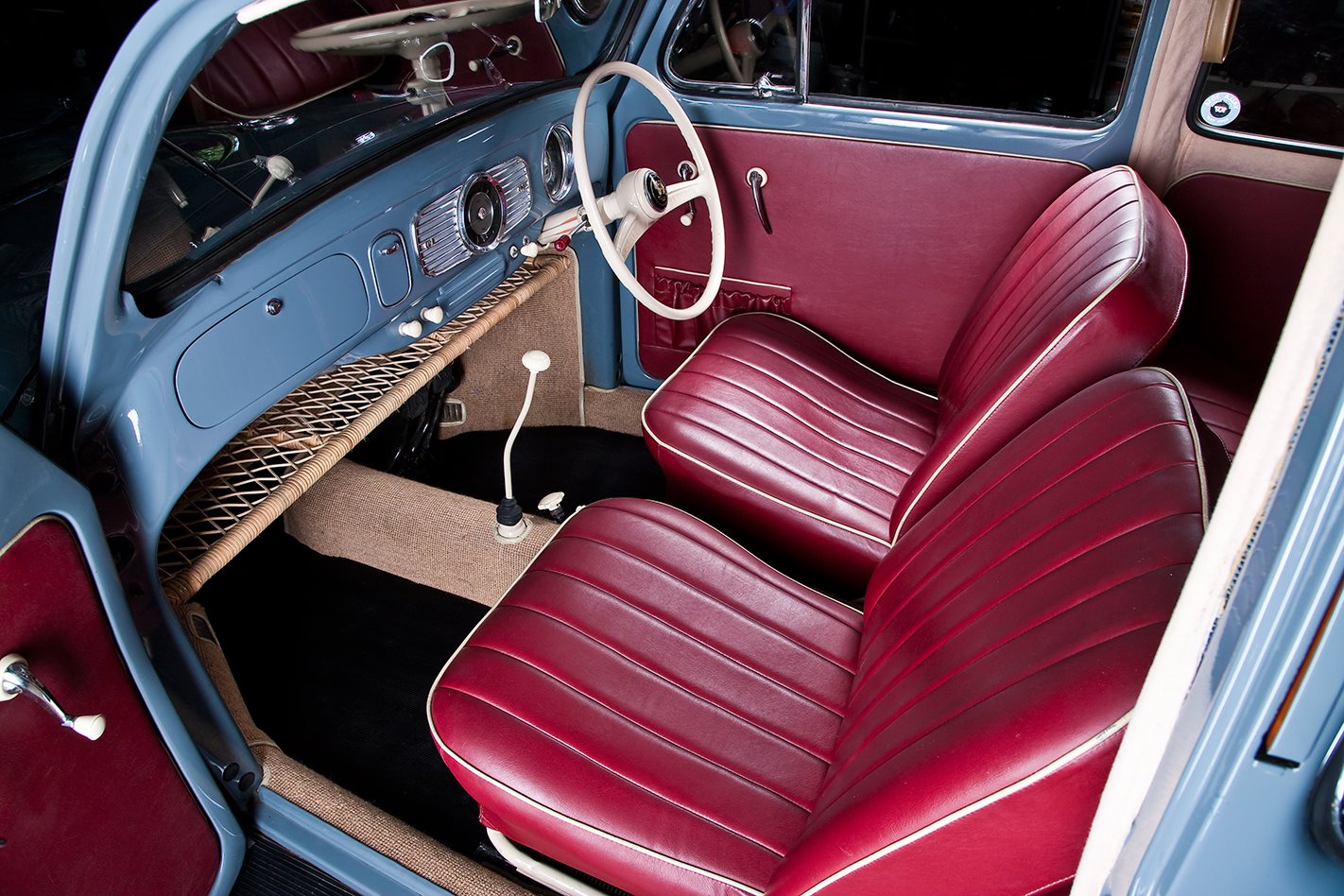 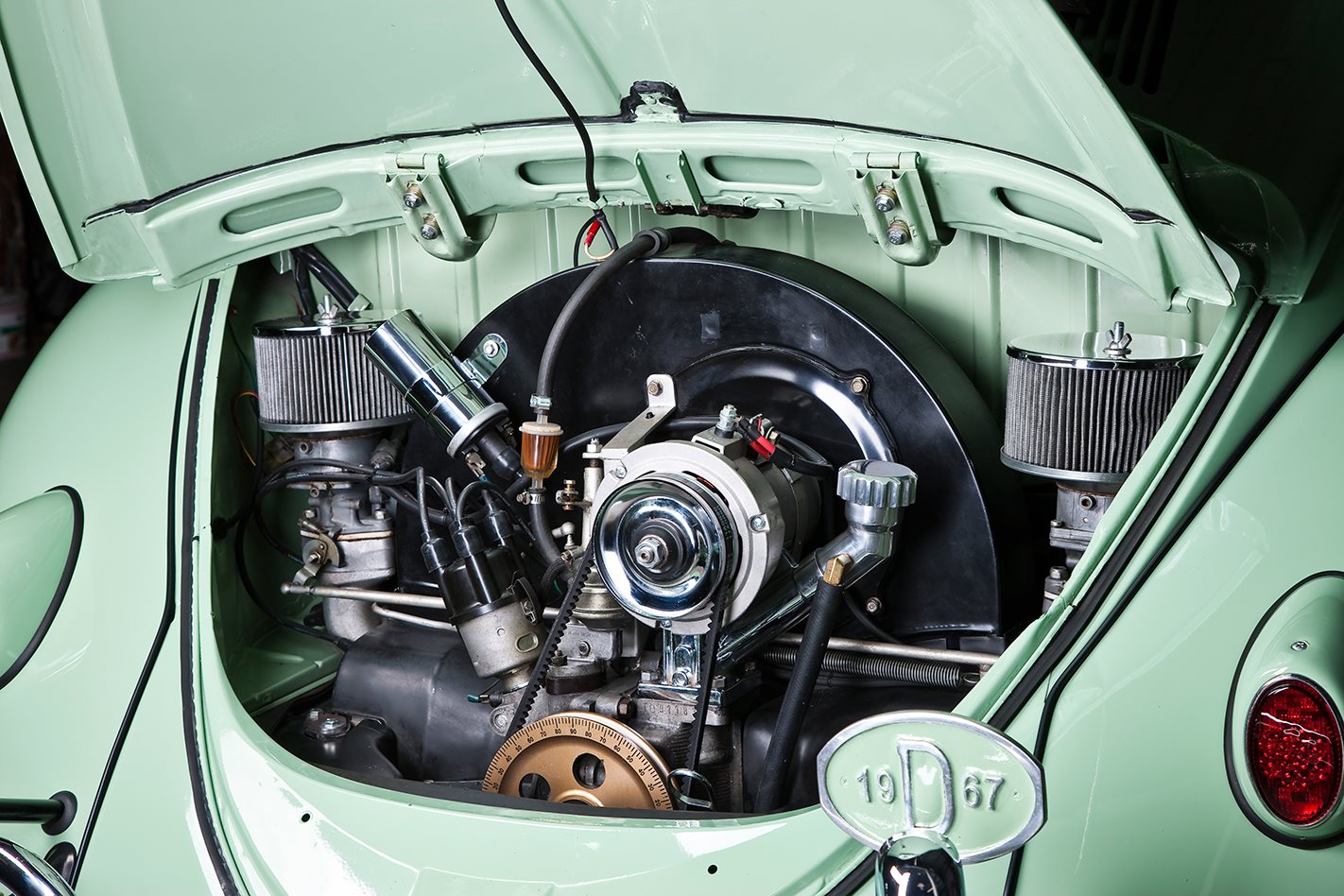 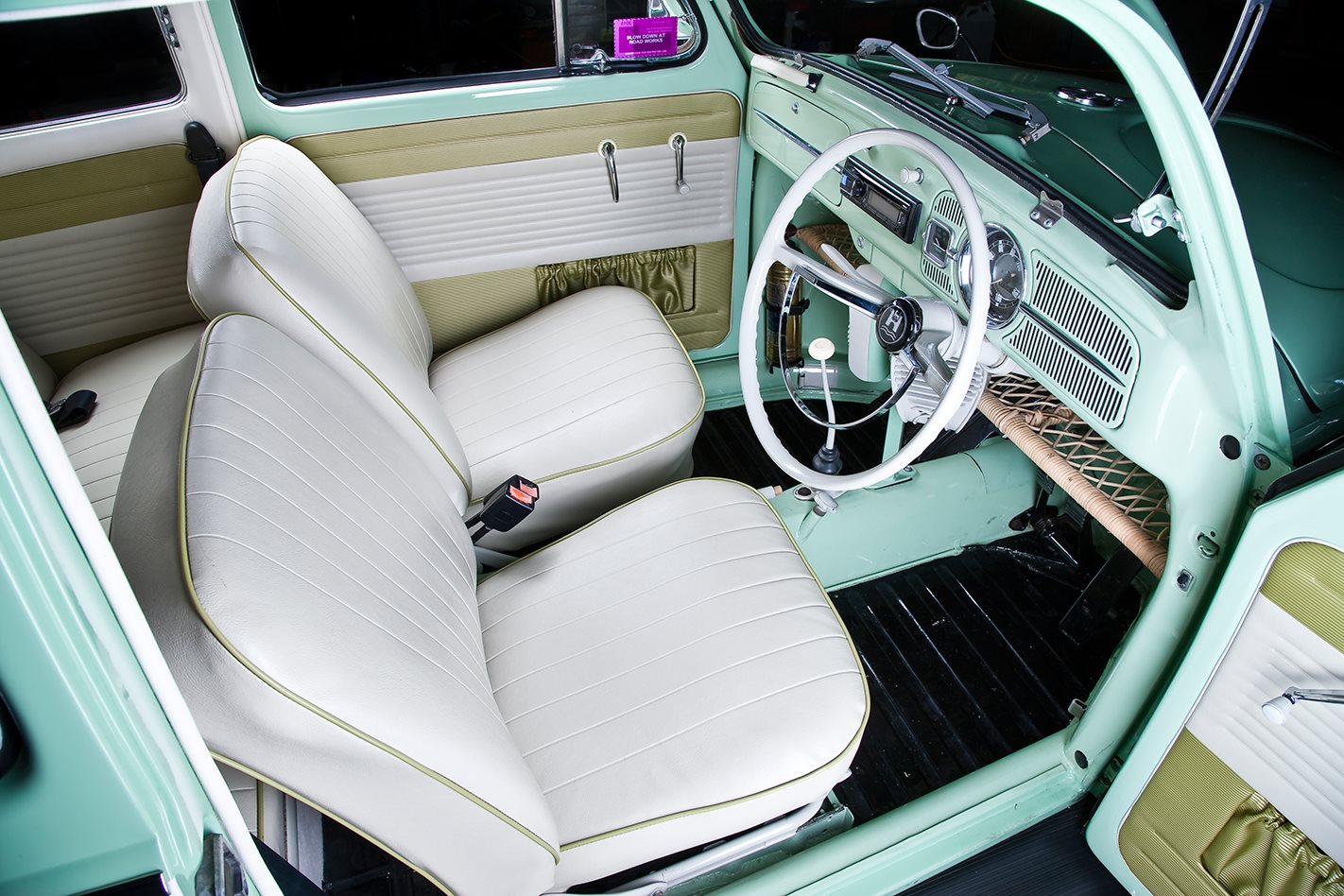