ONE of the biggest changes Phil Scott brought to Street Machine, when he became editor in 1985, was the idea of building super-cool project cars and then giving them away in an effort to drive sales. The first was HQFORU, which was project managed by our resident tech guru and motor-racing star, Kevin Bartlett.

The team ran a series of build stories on the car, culminating with a full feature and cover spot in the December 1985 issue. The competition was won Dale Cooper of Queensland. From there it went to a caryard, went through a couple of pairs of hands, before being bought by Rodney Menso from Ayr in FNQ in 1997 – who actually bought it from his wife Judith’s brother!

Rodney has been an amazing custodian of the car, not only looking after it with the greatest of care, but also using it as nature intended. He even drove the car to Street Machine Summernats 12 in 1998, how stout is that? He’s had HQFORU at the ’Nats a total of three times and been to shows up and down the east coast, including Meguiar’s MotorEx, Cooly Rocks and many more.

Rodney treated the HQ to a massive rebuild in 2010, with a killer new paint job and a blower for good measure, whilst retaining the identity of the car brilliantly. As we speak, Rodney is returning the car to normally-aspirated form, so the couple can enjoy it without being hassled by plod. Here is the original feature story in full:

IN 5 MAY 1985 she was a faded green family hack parked in the driveway of a friendly, off-duty bank manager. Five months and 10 days later she rolled out of the workshop following a ground-up resto that’s cost hundreds of highly skilled man-hours, more dollars than we’re ever going to admit to our beancounters and one or two tense moments.

HQ FOR U is reborn. From her special sheetmetal to her new Chev small-block, our project car is better than when she rolled off the line. There’s no question it’s all been worthwhile. But there were times we wished the project had never got started.

Anyone who’s built a streeter will know all about the hassles. Bits missing. Bits late arriving. Bits not fitting. Blokes promising to have a job done “next Friday, no worries”. A week later, you’re still waiting. Normally you’d cop it sweet. But we’ve had to build our car to a deadline. No matter what, it had to be finished in time for this magazine, so for the past month it’s been midnight oil and plenty of drama.

We nearly lost her late one night when a team of bandits poleaxed their way into Phil Travers’ Autodesigna workshop. The Q was in the spray booth undergoing a bake cycle. Just a bare shell, sitting on stands. They broke open the oven and had a look but obviously decided a red shell would be harder to shift than a three-dollar note. Since then, the burglar alarm has been upgraded.

But enough of this idle chat, what about the car?

We’ve detailed most of the body in previous issues. It was a full teardown, from the black vinyl roof to the scunge on the underbody. The rear guards received an all-metal pump that took something like 50 hours a side.

The front looked funny once the rear guards had copped the mega-flare job, so we decided they’d better add some bulk as well. The same deal applied. About 50 hours a side to cut, pump, weld in the fillets, grind off and fill-finish.

Of course, we’d already slung in the HK vertical vents. With the guards worked, our Q looked like a red shark, all set to rip a leg off.

Then came the monotonous stuff. Like taking out The General’s body ripples, welding up some holes, changing the rear turn indicators around, then knocking off the retaining tabs to install that low vinyl top.

Luckily we started with a nice straight car. The only panel cancer was a spot the size of a $50 note on the driver’s side quarter.

Phil Travers masterminded the paint job. Starting from a stripped body, he treated the imperfections to Glasurit polyester filler, then went to work with 320 wet and dry.

The filler/surfacer chosen was Dulux Hi-Fill (two coats, cured at 50 degrees for 45 minutes in the oven). Then more rubbing, this time using 600 and finally 1200 wet and dry.

When the surface was smoother than a politician’s promise, Phil applied a five-and-three-coat system using Porsche’s Guards Red. 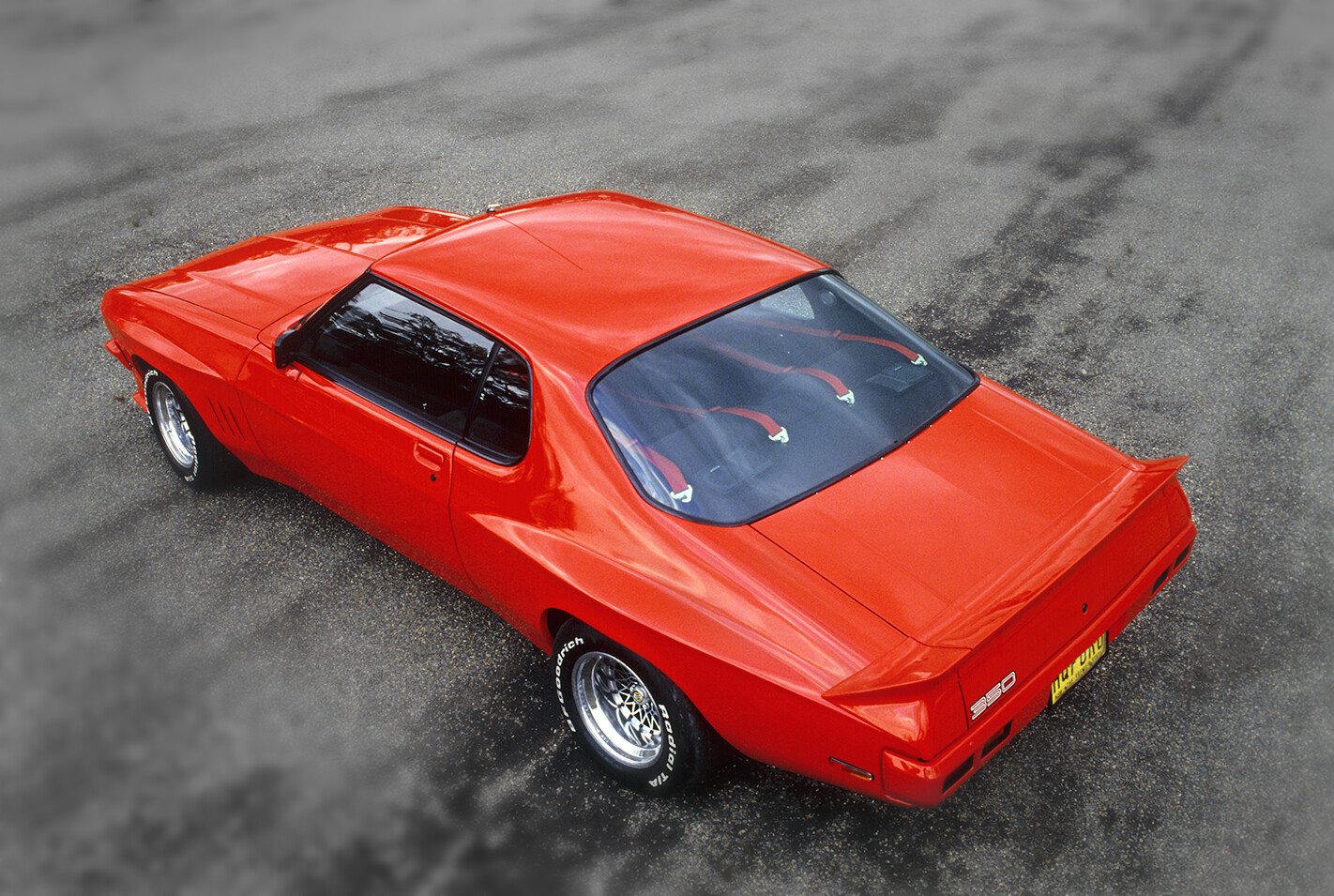 Converted Acran was used (the conversion process makes the paint better able to take a clearcoat). The five coats of red were applied wet-on-wet and then came the three coats of clear. Then the car was baked for one hour at 55 degrees.

A rub with 2000 wet and dry was next, then a mechanical buff with 3M cutting compound. That was cleaned off, then came a semi-finishing product called Liquid Ebony and, lastly, wax and plenty of it.

Still on the body and trim, there was a heap of fiddly work bringing the car up to the standard we wanted. The mirrors were a bit of a problem; the standard HQ items looked right out of place, so after a bit of experimenting we settled on TF Gemini units.

The grille was another item that caused much workshop lurking and various pieces of chat. When Travers said he’d like to try an orange highlight, we reckoned the pressure had got to him.

But two days later he’d done it – and in the flesh it looked a lot better than he’d described it. Of course, we tossed around the idea of a Statesman front, but we reckoned they were as common as big bums at a Weight Watchers’ convention, so we stuck with the LE twin-headlight set – just to be different.

The lights themselves are brand-spankers, including the 100W quartz inserts. There’s nothing worse than having a quick piece of road iron that outruns its lights when the sun goes down.

All the moulds were good. There were a couple of small dings but they got filled and came up as good as new. With all that red paint, we figured we needed some contrast, so Phil got the gun out and ran some black over the lot.

Like most Qs, our car’s rubbers were rooted. The only solution was to replace the whole lot with items from the boys at Rare Spares. And every clip on the car has been replaced, although some of them were a pain in the bum to find.

About three weeks short of the deadline, we were in strife. We had a long list of bits – from a new washer bottle to a GTS fascia and instruments – that couldn’t be had for love nor the folding stuff.

Holden came to the rescue. We dialled the boys at GM and a few days later had a cardboard box full of bits – right down to new rubbers for the stop and go pedals.

Our parts-bin raid also netted some small but valuable bits and pieces, including gaskets for the door-lock barrels and a whole heap of nuts and bolts.

We had a good look at the glass. There’s nothing worse than a good resto that’s been spoiled by keeping original glass that’s pitted and covered in scratches. The rear screen was great, but the front was a bit second-hand, so we fitted a new tinted-band laminated unit.

To complete the picture, we bought new front and rear bars and colour-coded them to the body. The door piping was bad, so it too was replaced.

We wanted our interior treatment to look understated and classy. We looked at plenty of seats and trim fabric, settling on a matching black-and-anthracite combo.The seats are German, made by Konig and supplied by the helpful blokes at Carisma in Sydney. They imported the extra bolts of fabric we needed and organised a re-trim for the rear seat and door trims. Auto Boutique did the rest.

Phil Travers had all the right formulas to mix up the plastic dye needed to do a colour change on the dashboard, crash pad and console. Brown turned into black – and looked better than new.

We wanted good sounds to come from more than the small-block and the Genie headers, so in went a new Kenwood stereo with omni-directional rear shelf speakers and a pair of dual cones for the front.

The Reviva men came to the rescue with carpet for the Q. Brand new moulded thick-pile stuff from stem to stern, while the boys from Auto Boutique took care of the headlining, door trims and armrests.

We looked at quite a few steering wheels and went close to putting on a repro of the original GTS unit. But finally we settled on a Momo suede-bound alloy wheel.

There’s more stuff we haven’t mentioned, but we’ll leave that to your optics. Check the pix and you’ll find some subtle tweaks.

We were hoping you weren’t gonna ask that, because the Q was finished about 24 hours before these pictures were taken.

Because she was brand-spanking new and as tight as a fish’s bum, there was no way we were going to sink the right foot until everything had bedded in properly: Engine, diff, gearbox, brakes…

What we can tell you is that the Q pulls like a 14-year-old. The torque is sensational and Lynx reckons once those bearings and the top-end gear have seen a thousand kays, we’ll find out the small-block’s got plenty of top-end grunt as well.

The car handles nice and flat thanks to those big bars and KB’s choice of coils and dampers. We’ll update you in the next issue on how the Q performs. Now you might reckon this next bit is a free plug, to square up for some freebies, but you’d reckon wrong. We’ve paid folding green to every company involved in the project, on account of we don’t want to be in anyone’s debt.

To Phil Travers and the Autodesigna boys, a special thank you. These blokes love their work and put in an effort over and above the odds.

To Lynx who supplied the small-block – thanks. To Kevin Bartlett who specced the car then screwed it together, well done mate.

Our only regret now is that we’ve got to find another home for the Q. Every one of us would like to own it, but we can’t even enter.

So grab your scribbling sticks and get those entries in. You gotta be in it to win it…

…And Dale Cooper from Brisbane duly got into it and won the Street Machine HQ from “a pile of 40,000 entries”. The winner was announced in the March 1986 issue of Street Machine, with KB handing over the keys. “I don’t know what to say except thanks,” Dale told us. “I’ve been telling my mates I was going to win… but no one’ll believe it, not until I cruise around in the car.”