YOU have to wonder how this bloke does it, turning out a killer car every time we look the other way. It doesn’t matter if it’s a hot rod, custom or even a motorbike, if Mario Colalillo builds it, you know it’ll be cool. This Cadillac is the pinnacle, his pièce de résistance, but not his swansong because you know Mario will be building cars until the day he shuffles off his mortal coil.

“Wild Cad’s a project that I don’t think I could build again; it’s tested me to the max. I’ll get on with the Buick, muck around with a few Holdens and a chopper, but I feel satisfied after building this car. The personal satisfaction level is unbelievable — words can’t explain it. I feel like I can go fishing for a couple of years. It’s the kind of satisfaction that signing cheques can’t buy, the hands-on creation of something with good people alongside you, and that’s what this car’s been about,” Mario says.

Check the flow from the bonnet into the windscreen and down to the rear glass. The custom ’screens were the biggest job on the whole car. Also note that the seat top is barely visible above the door line

The most important person beside Mario has been his lovely wife Catriona, who can now finally have her man to herself — at time of publish, Wild Cad was on its way to America.

“When I met him he was building that crazy chassis. I dead-set thought he was mad. As soon as the body was grafted to the chassis a year later I could see the vision and we all understood where he was going with it.

Gene Winfield signs off on his paintjob. Tail-lights on the third tailfin light up the interior

“For the past two years it’s been a daily thing for the both of us. Put it this way: we planned our wedding around when Gene Winfield was coming. We kept putting the wedding off because we kept spending all our money on the Caddy,” she laughs.

That wasn’t the only sacrifice made to fund the project. “The black panel van is for sale to pay for all the shipping and insurances. That’s all blown out but it means that Slammed 60 is mine, so I score. I love my panel van but I’m not going to say no. We’ve sold quite a few FBs to build the Cadillac.”

Bonnet has been pancaked and opens arse-about thanks to a couple of heavy duty electrically operated screw jacks. Once again, not many customs get this much detail in the engine bay

The shipping is to get the car to America, where it will compete in the Showcase of Kustoms at the Long Beach Motorama alongside some of the best customs in the US. Quite a few of Mario’s idols will be at the show, including Gene Winfield, who painted the car.

A great shot of the engine bay sans big-block, giving us a look at the well-thought-out chassis

“He can’t wait to see the car,” Mario says. “He’s not seen it finished. Gene Winfield is very, very special in the story of this car, because he inspired me to build customs, as did Rick Dore, John D’Agostino and Richard Zocchi.

Lower tail-light bezels were completely remade to accept ’57 T-bird lights. Standard ’59 Caddy boots open up all the way to the bumper. Not this one; a custom stainless panel above the bumper tidies the rear, while the tailpipes exit at the centre as the exhaust runs through the tunnel

They might be Mario’s idols but he’ll probably be calling them all ‘bro’ by the end of the weekend.

Those guys do it easy, anyhow; start with a nice car, do some tasteful customising, add killer paint and trim and you’re done. Easy. Wild Cad didn’t start out quite like that.

A great shot of the engine bay sans big-block, giving us a look at the well-thought-out chassis

“When I got the old body shell, the roof was sitting against the fence. Someone had cut it off to make a convertible; it was just a gutted body sitting on an old chassis. It was on three wheels, man. Half the control arm was missing on one side, so we dragged it onto the trailer on three wheels, threw the roof inside and when we walked across the road and looked at it, Andy said: ‘Dad? Are you sure you know what you’re doing?’

Few customs are detailed to this level underneath. Block on the right is titanium — that’s what the car sits on when fully slammed

“You couldn’t afford to start from a complete car. You’d need an unfinished, pulled apart, gutted out old coupe body and they’re hard to find. You’re better off starting with a good car but then you’d have to cut too much good stuff out.”

Once the sorry hulk made it back to Mario’s workshop, the roof had to be welded on so that they could chop it again — five inches lower. The body was braced so the entire floor and firewall could be cut out as the whole car was going to be built around a custom monocoque chassis.

For advice, he went to chassis guru Terry Cartwright, who suggested Mario should fabricate the chassis himself. That could be code for ‘Christ, you’re mad!’ or it could be that Terry knew Mario was up to the job.

So three months later, after much welding, grinding and swearing, Mario had his chassis. The whole deal was planned out so there’d be nothing hanging down, partly because it looks better but also because Mario didn’t want to smash anything when he deflated the airbags. Fully relaxed, Wild Cad sits on a couple of titanium strips.

With the chassis wearing its new driveline — 454 Chev, Turbo 400 and nine-inch rear — it was off to TJ at Camden County Customs to marry the body to the frame. Full Jaguar front suspension went in at this point, and then Jason and Vince from Twisted Metal set up the computerised airbag system.

Filling the gaps between the chassis rails and crossmembers could quite easily have been done with big flat sheets of steel but that wasn’t the look Mario was after.

An entire second roof skin (seen here minus paint) was welded in to replace hood lining, and TJ fabbed panels to tie it in with the pillars. The V on the parcel shelf was laser-cut from billet. Mario shaped it by hand to match the curve, then drilled, tapped and polished it

“The floor panels have return flanges. They press in from underneath and are welded from inside the car, then seam-sealed very neatly. A fully smoothed floor is a neat thing but it doesn’t have the character of the floor of this car. The amount of character in the chassis is unbelievable — every bit of swage work in the floorpan lines up with the stainless trim pieces on the inside of the floor.

“There’re no body bolts to mount the body, no belly pans, no screws, nothing.”

Every interior panel was hand-fabricated by TJ. Custom rear seats match the T-bird fronts and the stainless strips on the floor echo the swages in the floor panels underneath. A ’59 Chevy gauge cluster is centre-mounted, as are all the switches

The biggest job on the car was making the custom front and rear screens and getting all the side glass to work with the chopped roof, but the next biggest was the metal hood-lining.

“I had these ideas and would go to TJ and he’d say: ‘You’re fucking kidding!’ The inside of the pillars was hammered over a buck. Normally you’d have a garnish mould but these were all hand formed by TJ. Three times we put that roof in. There’s a procedure on how it has to be done. You had to work with the car sitting on the ground, welding overhead. If you saw the bare metal photos of it, there’s only a very small wipe of bog. No-one can say that we just trowelled it in there.”

LED third brake light shines through a laser-cut KOOLSVILLE logo, a nod to the Beatniks

The level of customising is astounding. The roof chop is obvious but the amount of work that went into reshaping everything to look like it came from the factory doesn’t bear thinking about. Have a close look at the pics of the underside of the bonnet and boot and try to figure out how you get it looking like that after you’ve chopped the hell out of it.

But the finished article is all about that paint job. A signature Gene Winfield masterpiece of fading, blending and highlighting, laid down when the man was 82 years old. The inspiration for the scheme arose from a car Gene painted 20 years ago.

“I always idolised Royal Empress, the ’56 Lincoln that had the purples and magentas, and I wanted to recreate that paint job on Wild Cad.”

This car has been a life-changing experience for Mario and many others involved in its build. “It’s more than just creating it and saying: ‘I’ve got a cool car.’ It’s about the journey of how you make that car, sharing all those moments with those special people, and that’s what this car expresses.” 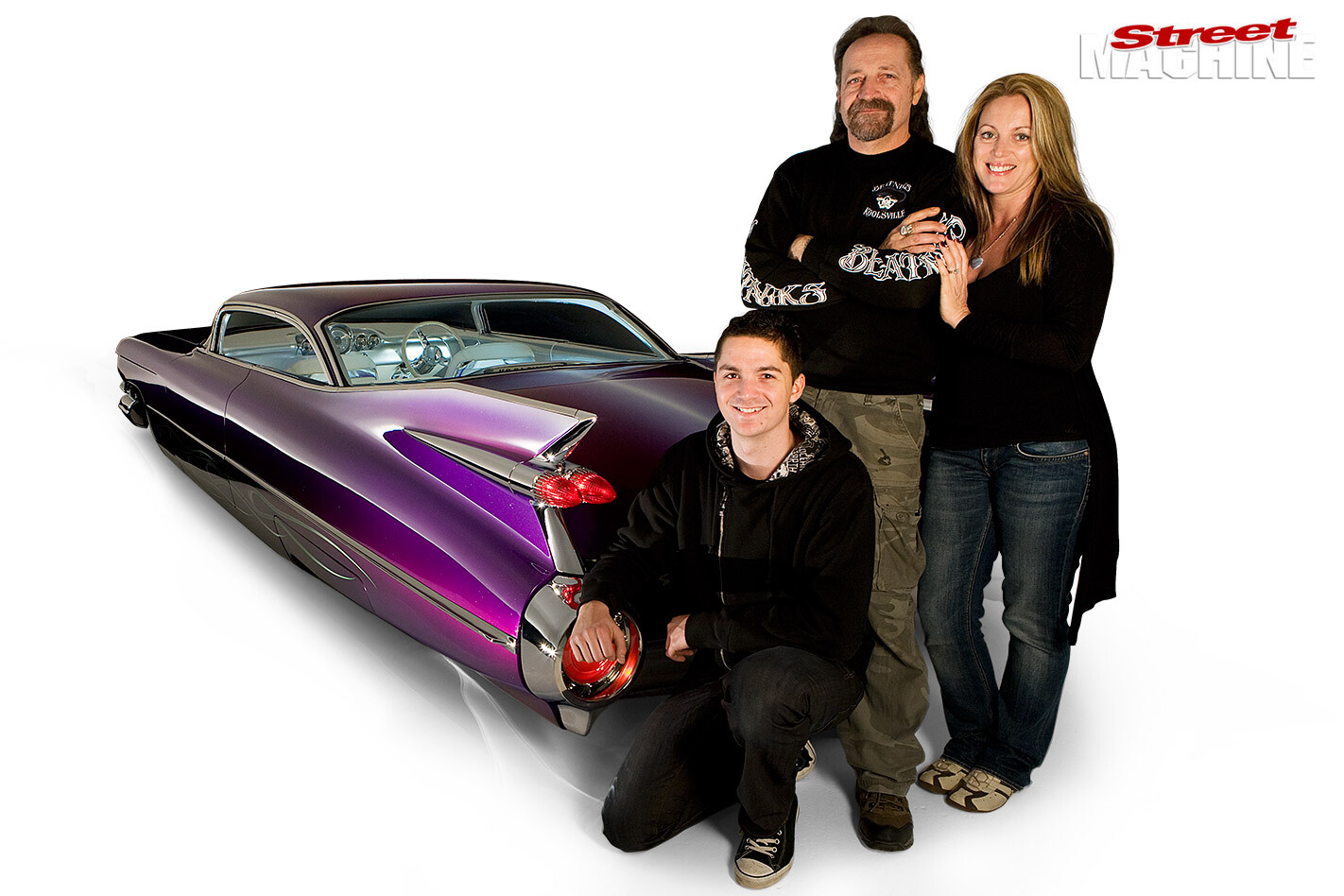