Our LX Torana hatch project is nearing completion – and you could win it!

WE LOVE building project cars here at Street Machine, so much so that we keep giving them away so we can build another one. Our latest giveaway project car is this LX Torana hatch that we’re fitting out with a healthy 355ci Holden V8, TH350 auto and 31-spline nine-inch rear; and one of you will win it! 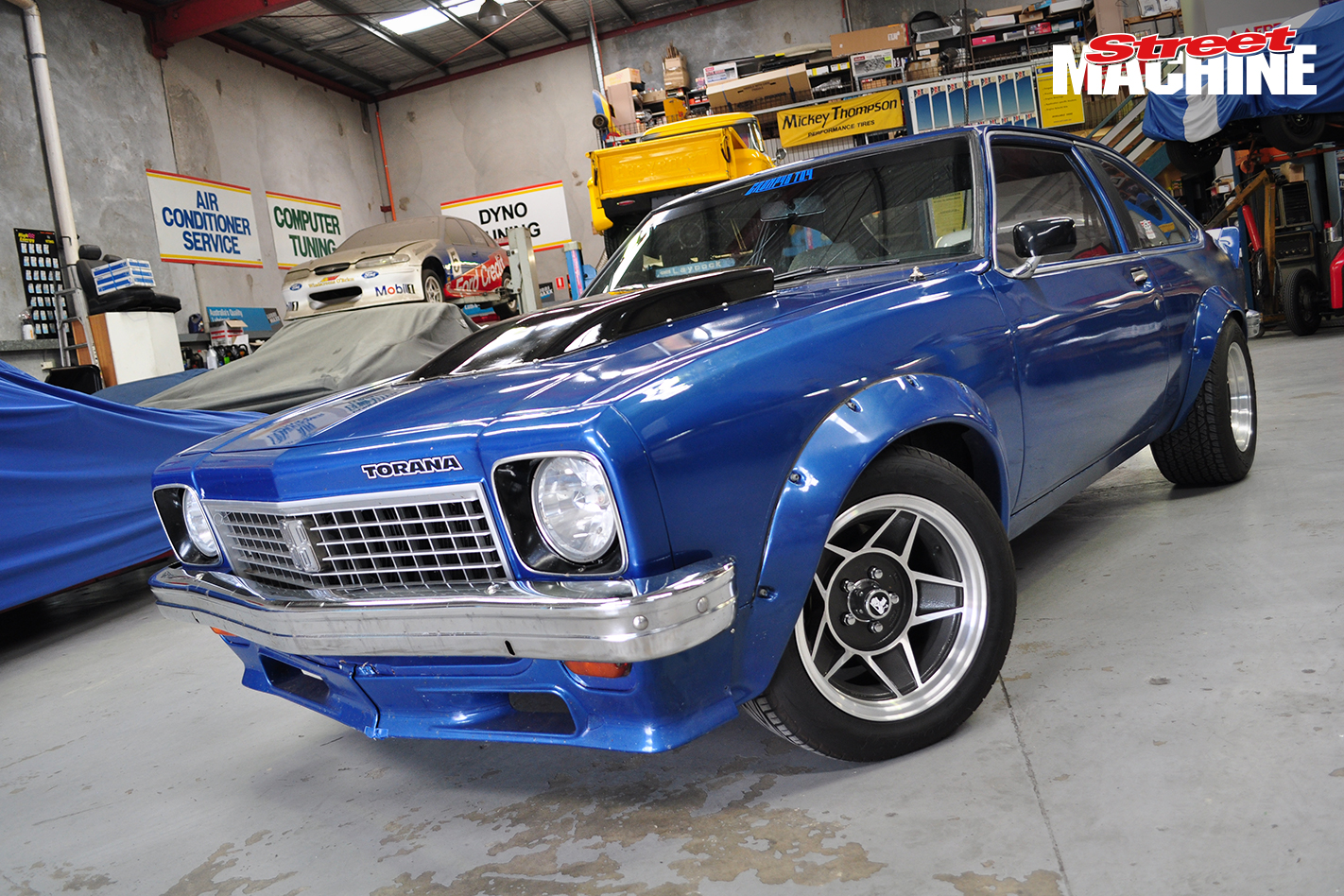 The Torana was purchased earlier in the year as a 253ci V8 and four-speed combo. It was a 202ci SL hatch from the factory, but along the way someone added the A9X flares and spoilers, along with some V8 grunt. It made all the right noises, but wasn’t especially quick or shiny; we nicknamed it ‘50 Shades of Blue’ due to its dull, mismatched paint scheme. 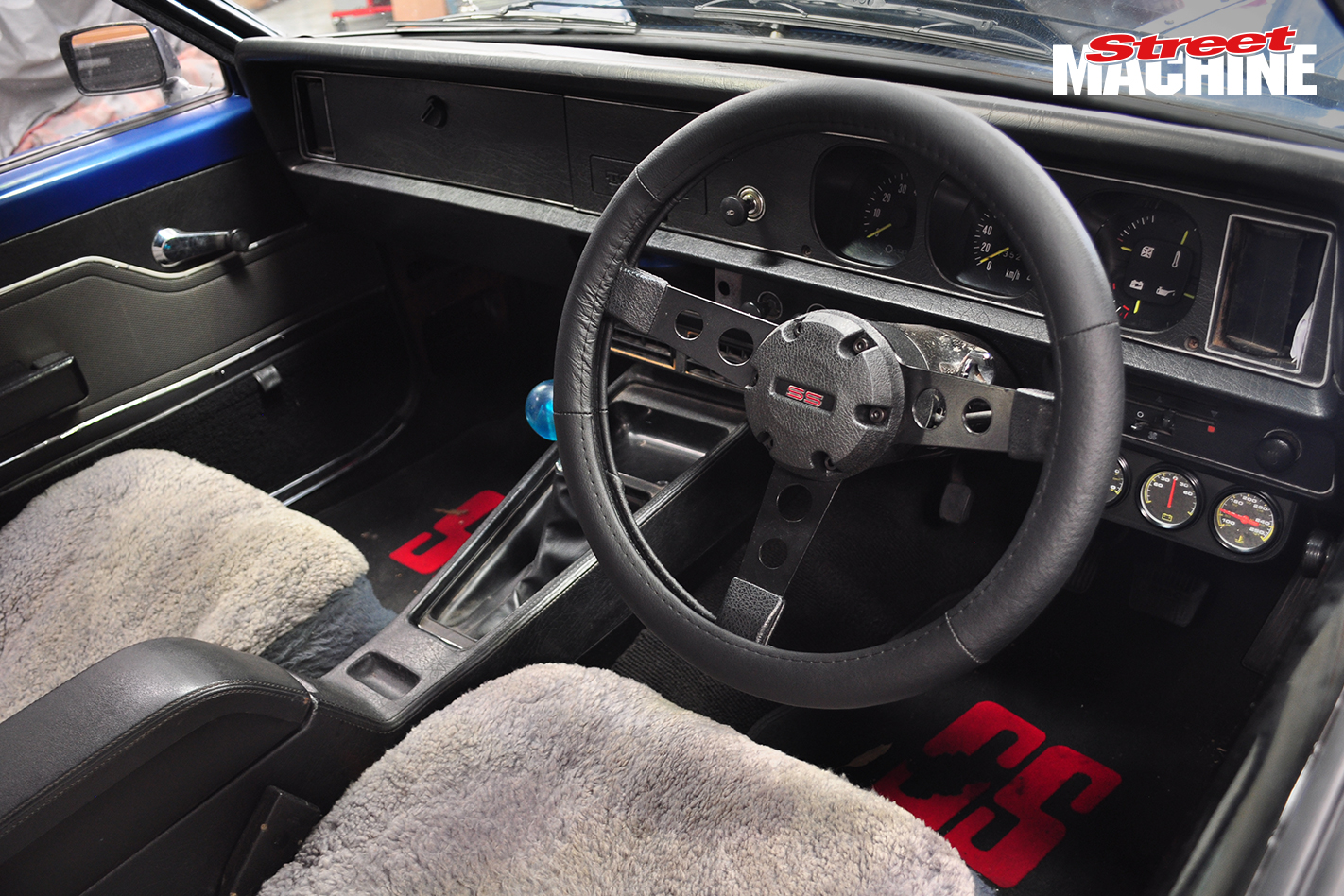 The standard trim was nothing to get excited about, but we’re sure Auto Image will fix that

Unfortunately our busy schedule meant we didn’t have the time to do the spanner work ourselves, so we enlisted the help of Mick and the boys at Glenlyon Motors in Brunswick, Victoria. Mick is a VicRoads engineering signatory and CAMS scrutineer, and he’s had more hot Toranas than we’ve had souvlakis – and we’ve had a lot of souvlakis. 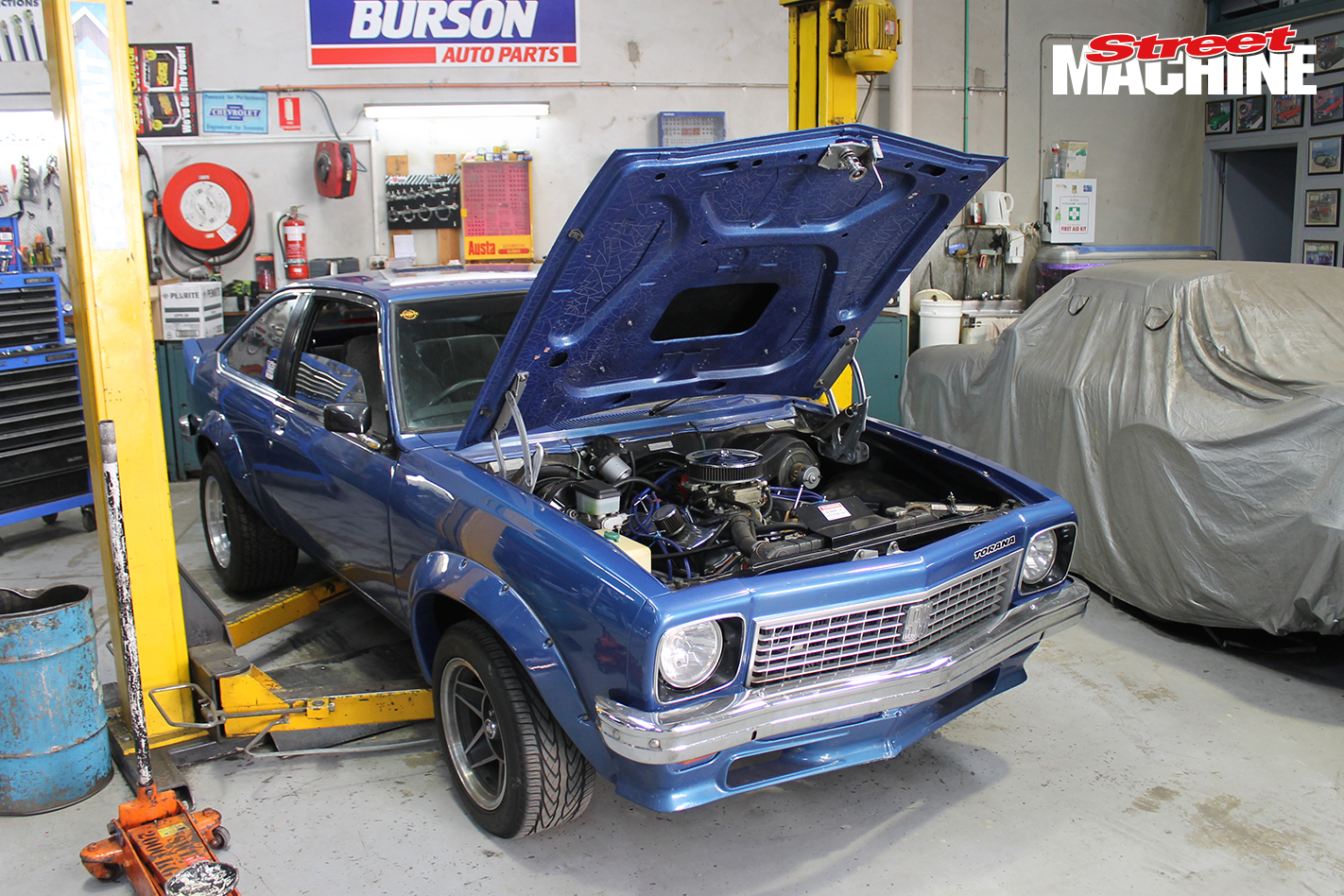 Mick and the guys stripped the car of its driveline and interior and mounted it on a rotisserie in preparation for paint and panel at Corporate Auto Body, where Chris Pearson and his team have blocked it down and given it a coat of Ford Focus Electric Orange with A9X-style blackouts. 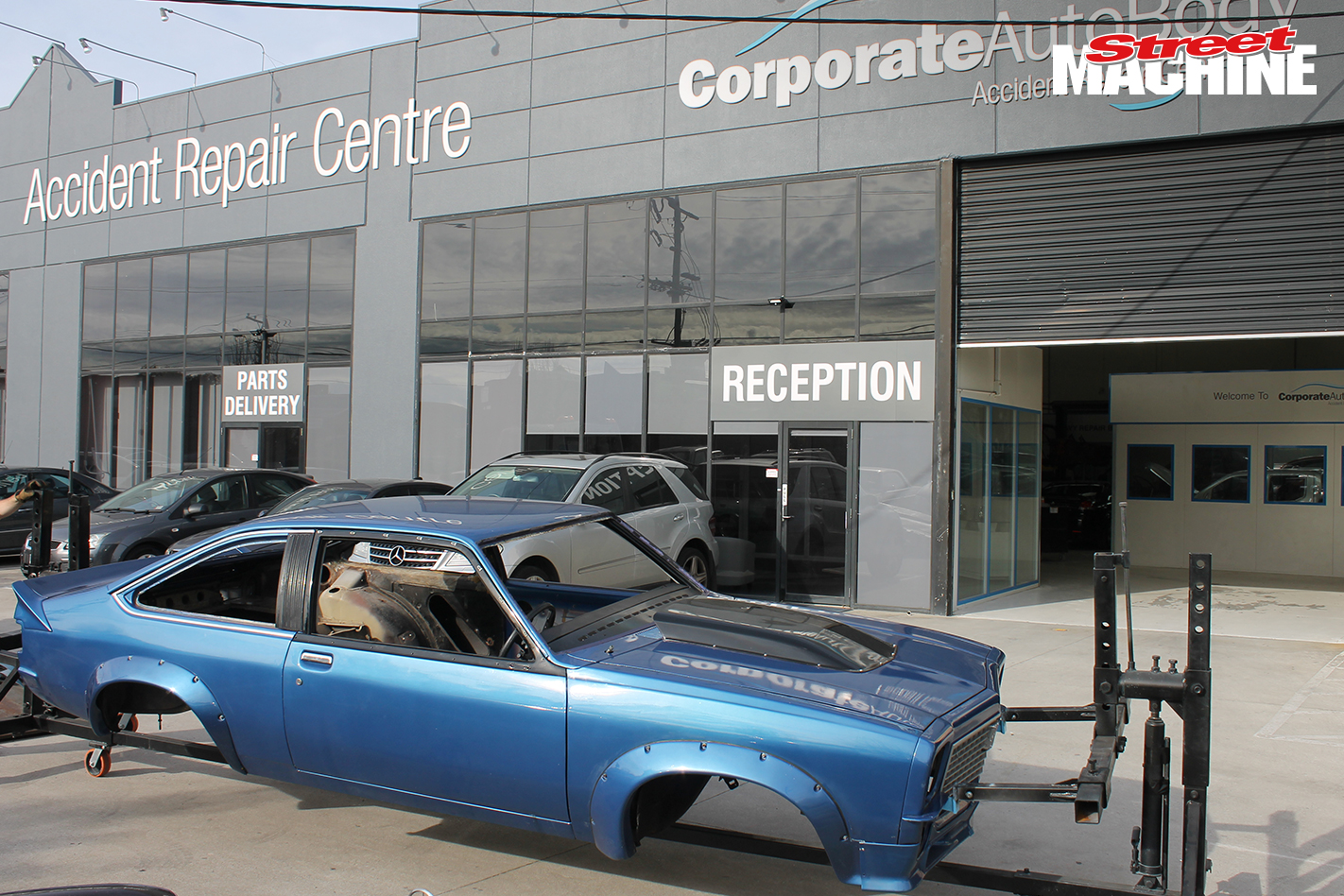 Then the shell was delivered on a rotisserie to Corporate Auto Body in Thomastown, Victoria

Now the paint is done, it’s time to put it all back together, and Mick has built a 355ci Holden V8, using parts from Precision International, to insert some grunt between the front rails. It’ll be bolted to a BBE Automatics TH350 trans with a 3000rpm converter, which will push the power back to a disc-brake nine-inch from McDonald Bros Racing with 3.5 gears and a Truetrac centre. McDonald Bros has also supplied a set of its fixed-length tubular lower trailing arms, and adjustable arms for the uppers. The springs are Kings all ’round, while shocks are Konis front and rear. 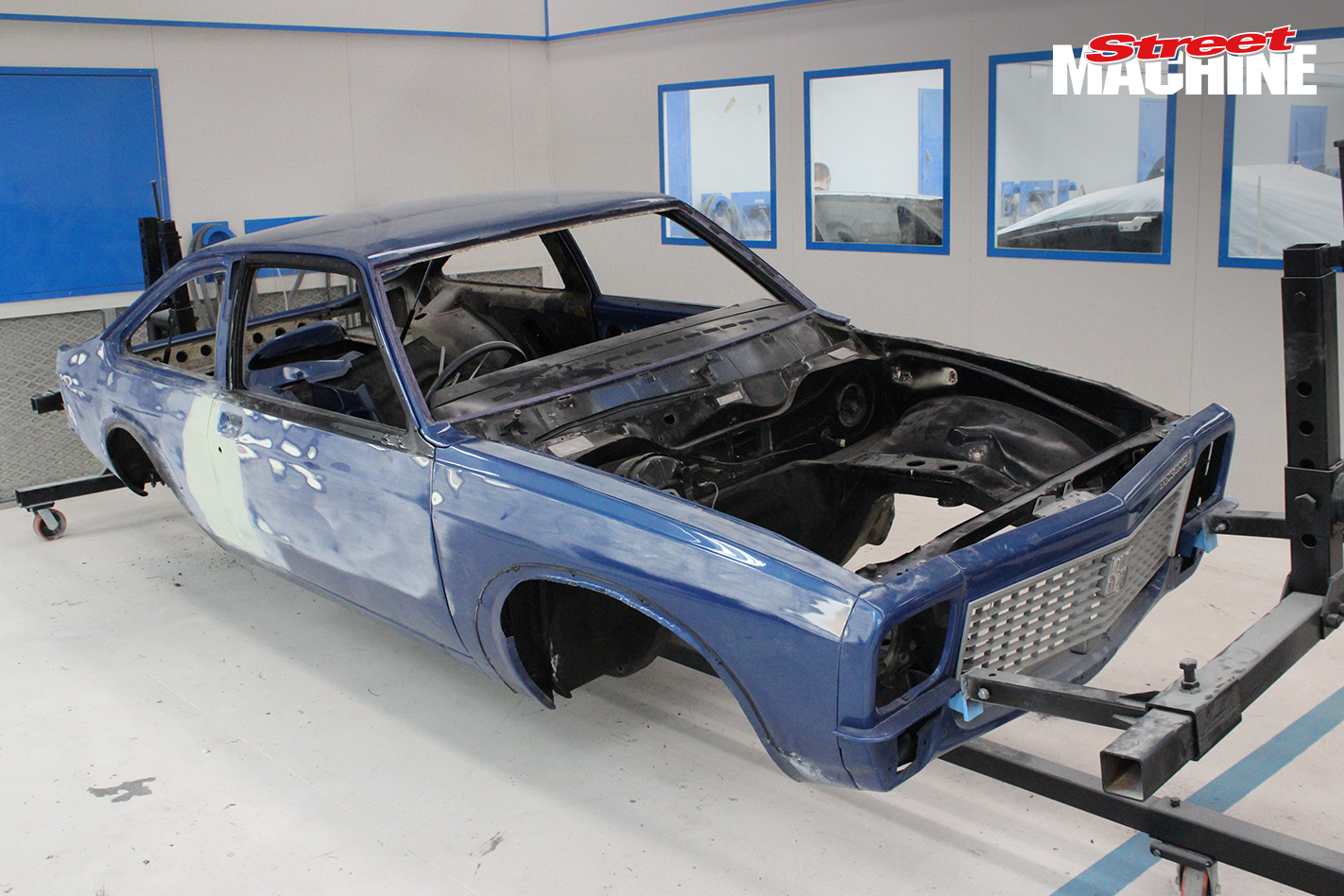 We’re keeping the 15in Globe wheels that came with the car because they’re practically new, and look awesome. 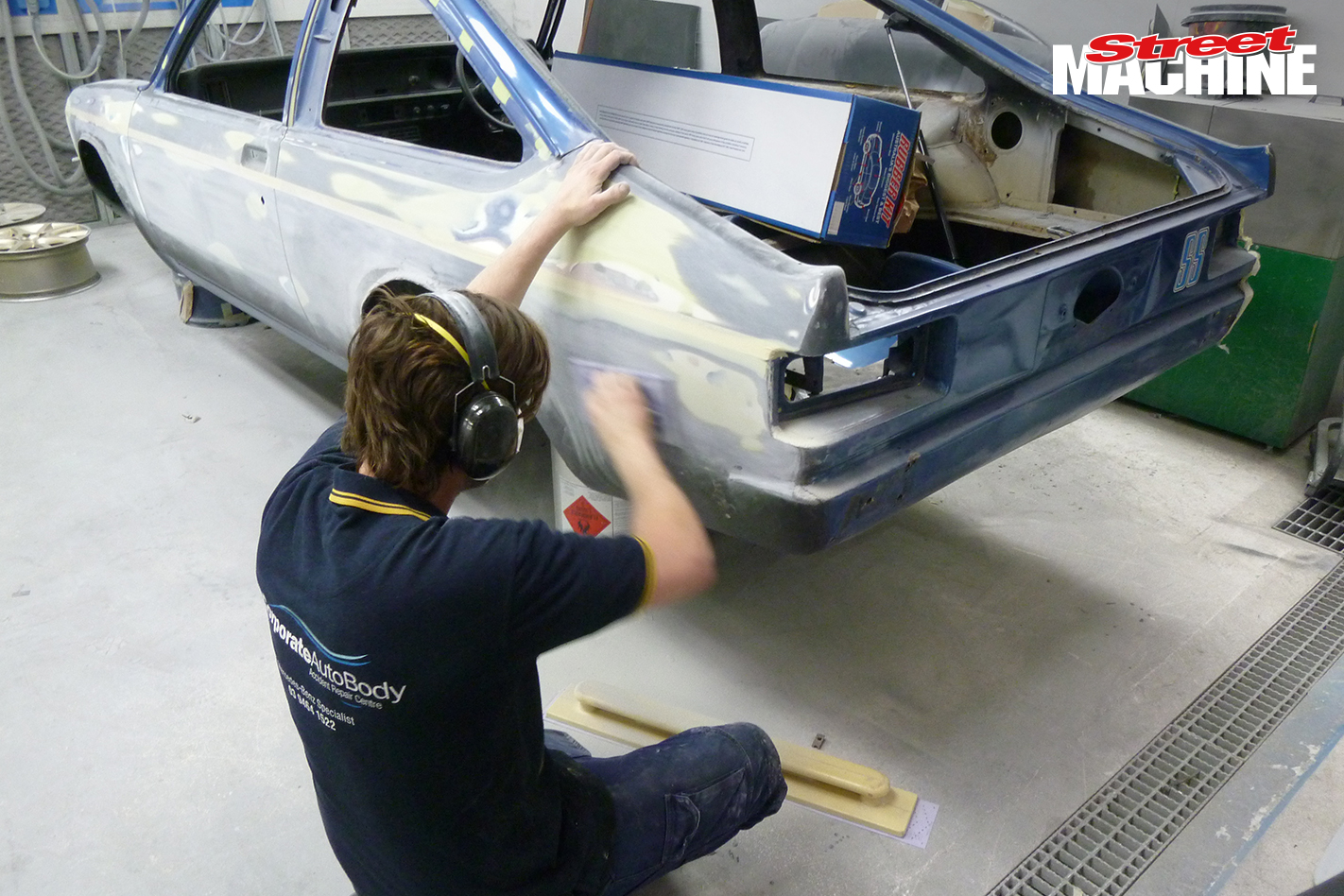 At the moment the boys are flat to the boards trying to get the car ready for Summernats 29, where the car will be on display, and they’ve just bolted the engine and trans in the front. Then it’s off to Auto Image for a new interior. Once they’ve got it all sorted the guys will fire up that Quick Fuel self-tuning EFI set-up and we’ll hit a few cruise nights. 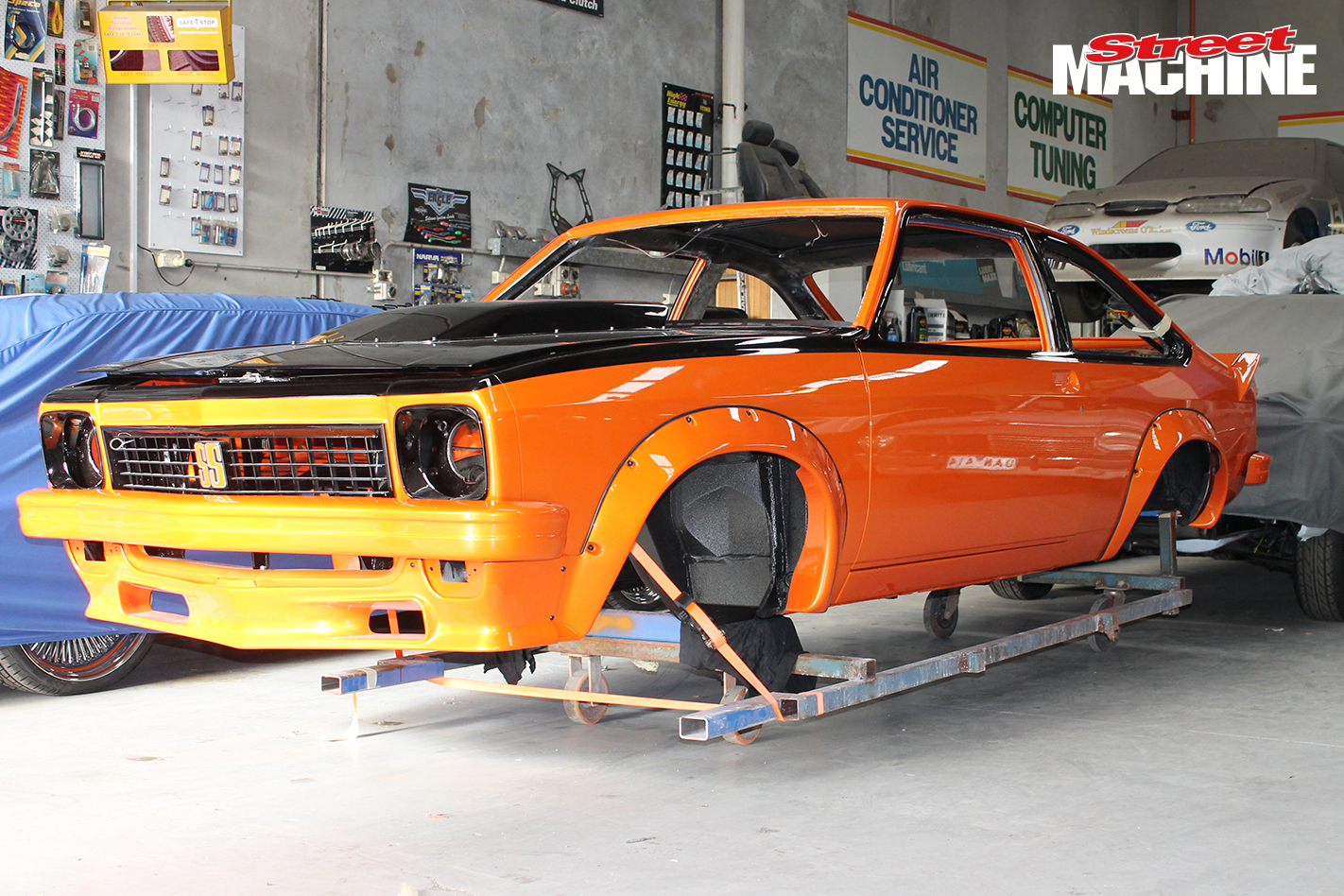 Here it is after paint. The colour is Electric Orange, the same as you’ll find on a Ford Focus

Want to win it? Then grab a copy of our March issue, out 25 February. If you can’t wait until then to see the finished product, get along to Summernats and see it in person at the Street Machine stand. 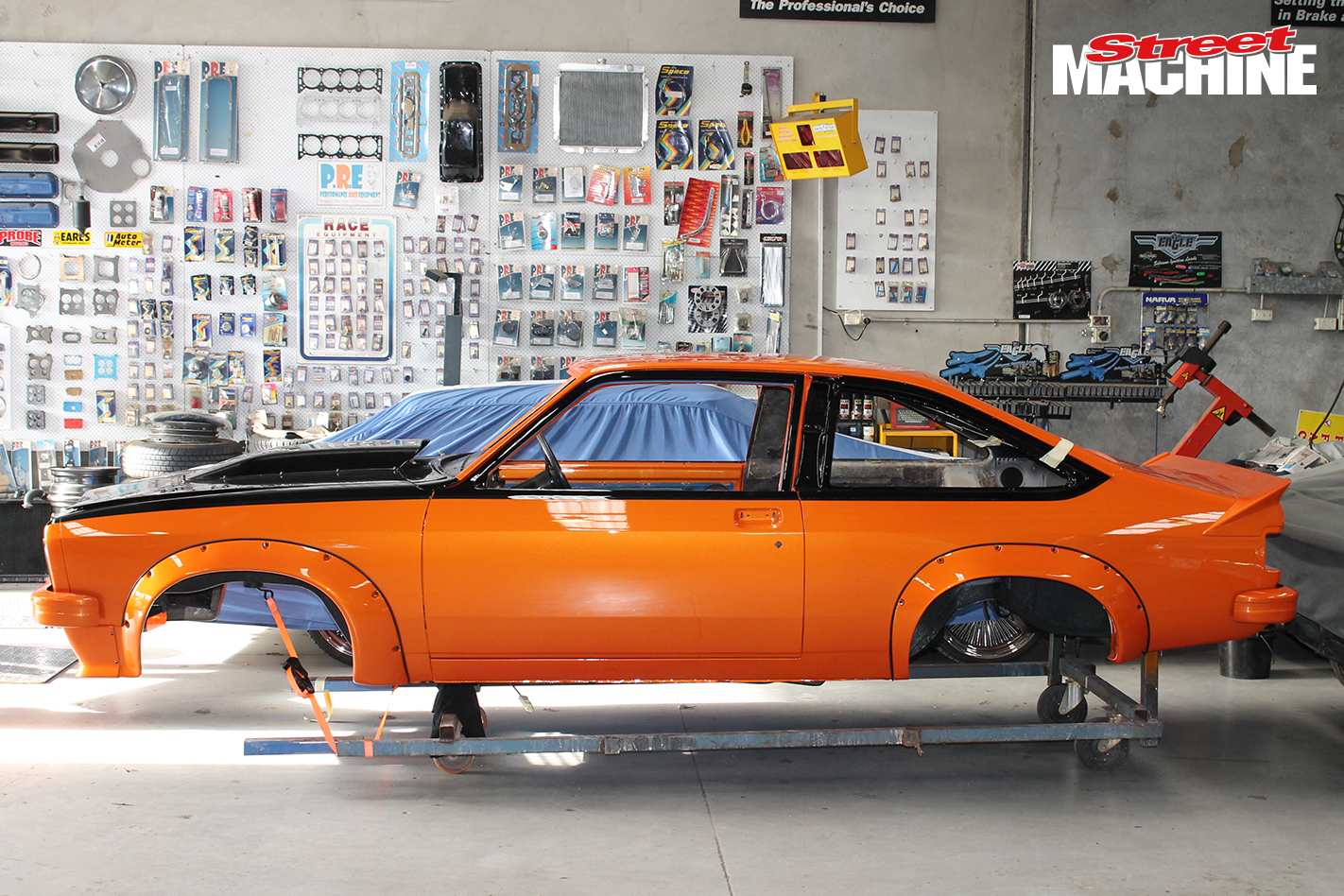 Now it’s time to put it all together. The guys at Glenlyon Motors will be handling this task as well 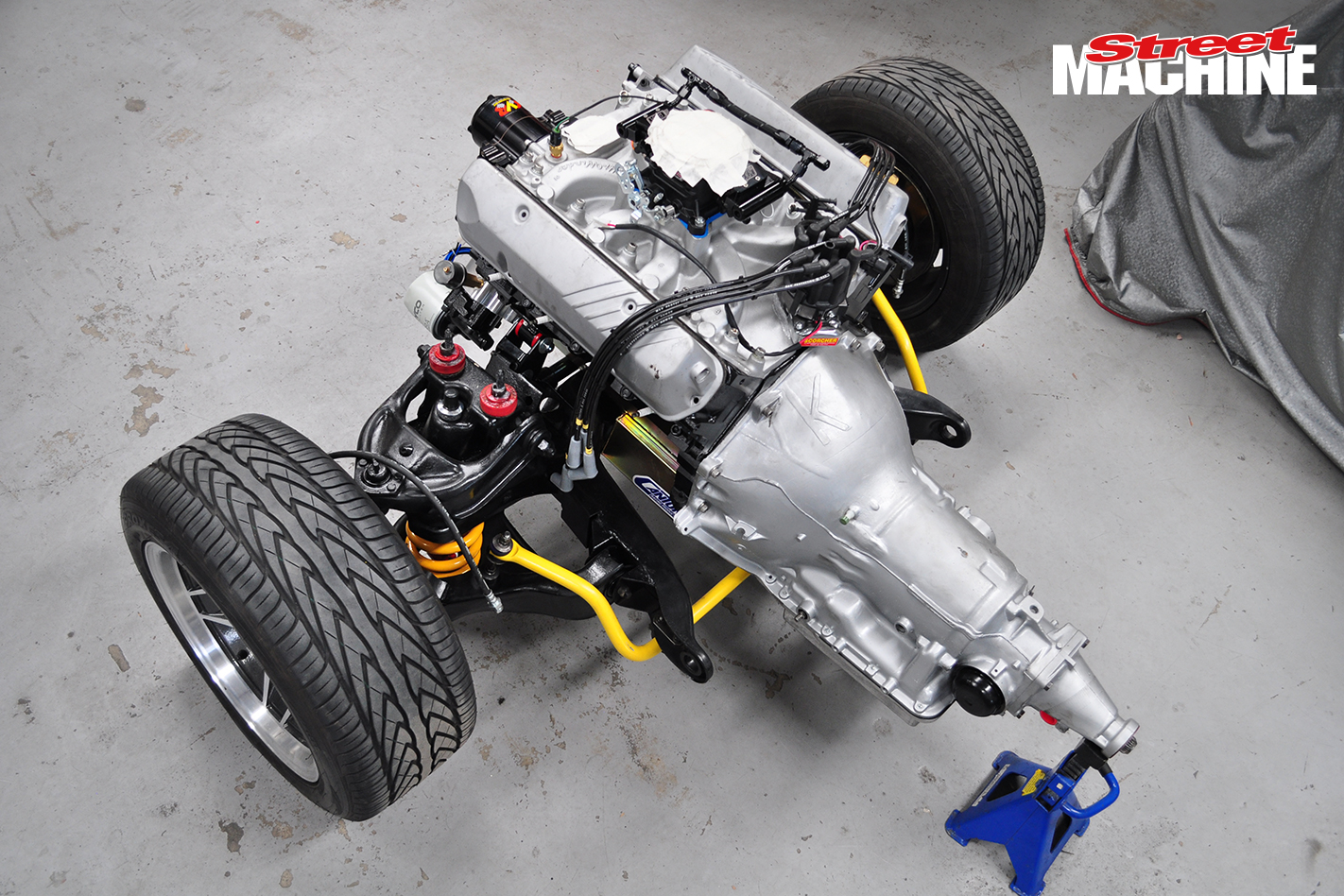 The 355ci Holden V8 will be getting a pair of powdercoated Lowe Fabrications rocker covers; the TH350 is a full-manual trans from BBE Automatics 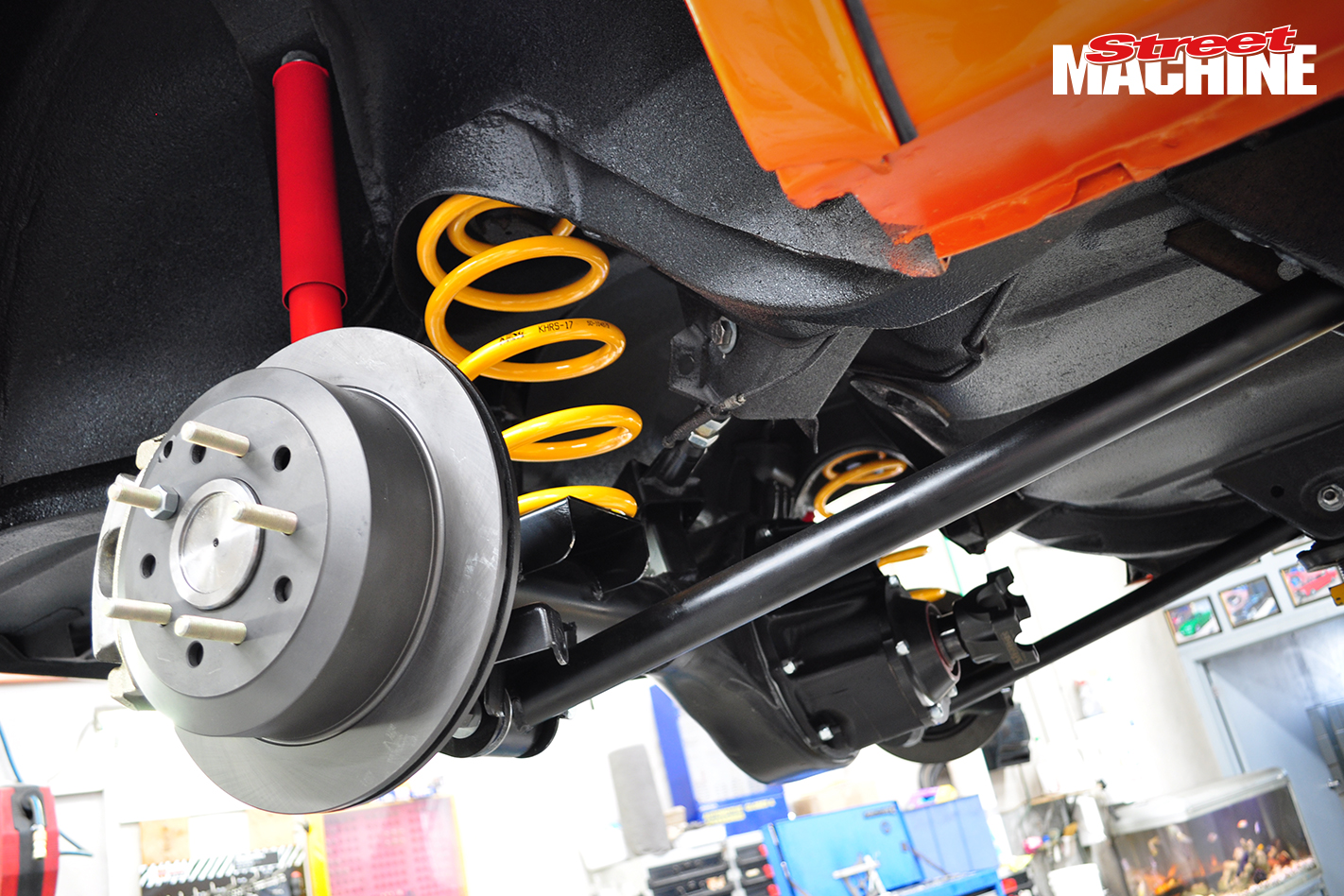 The 31-spline disc-brake nine-inch came from McDonald Bros Racing, as did the upper and lower control arms 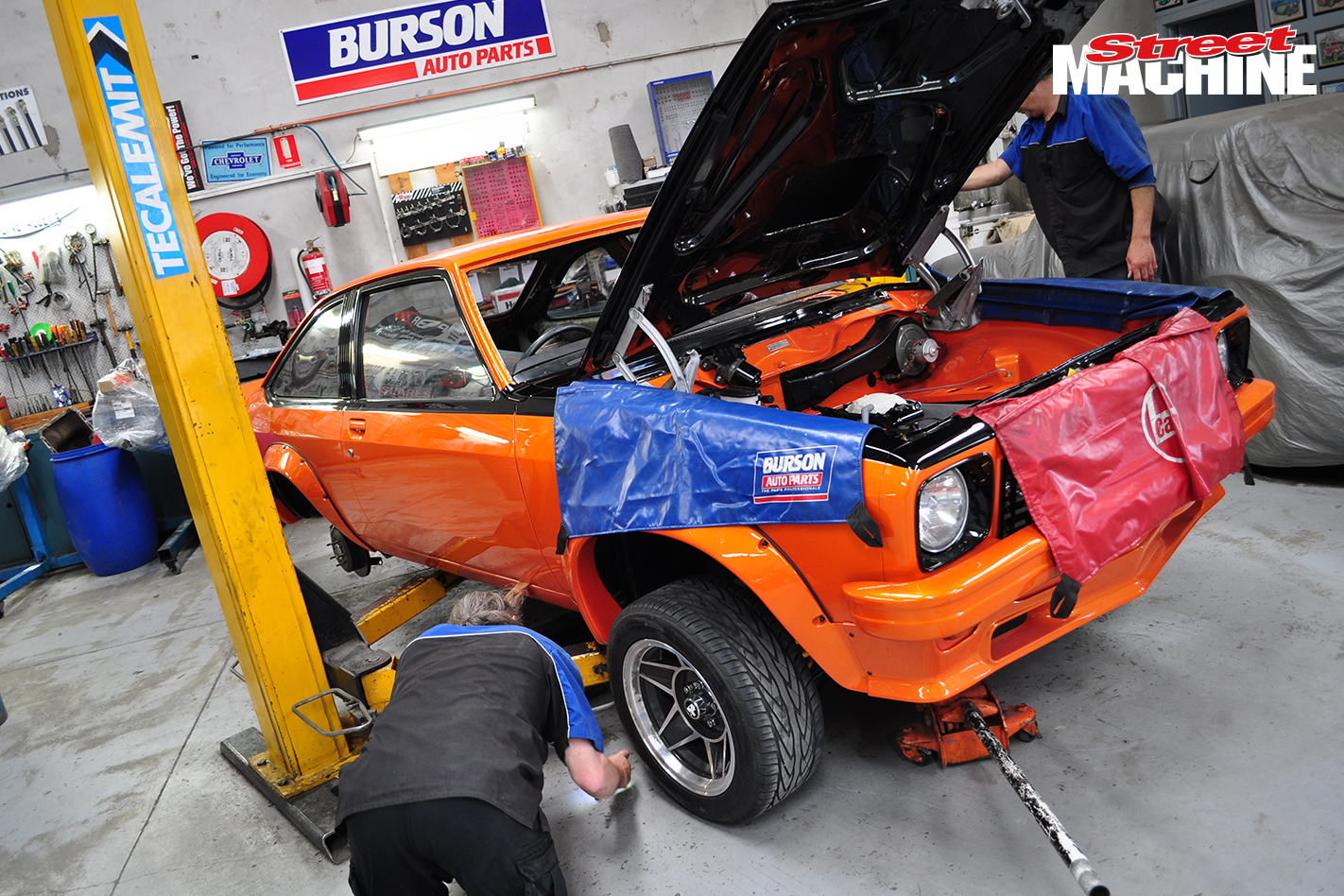 Having a hoist makes this job a breeze. A bit of wiggling and jiggling saw the whole engine/trans/front suspension assembly slide in from underneath 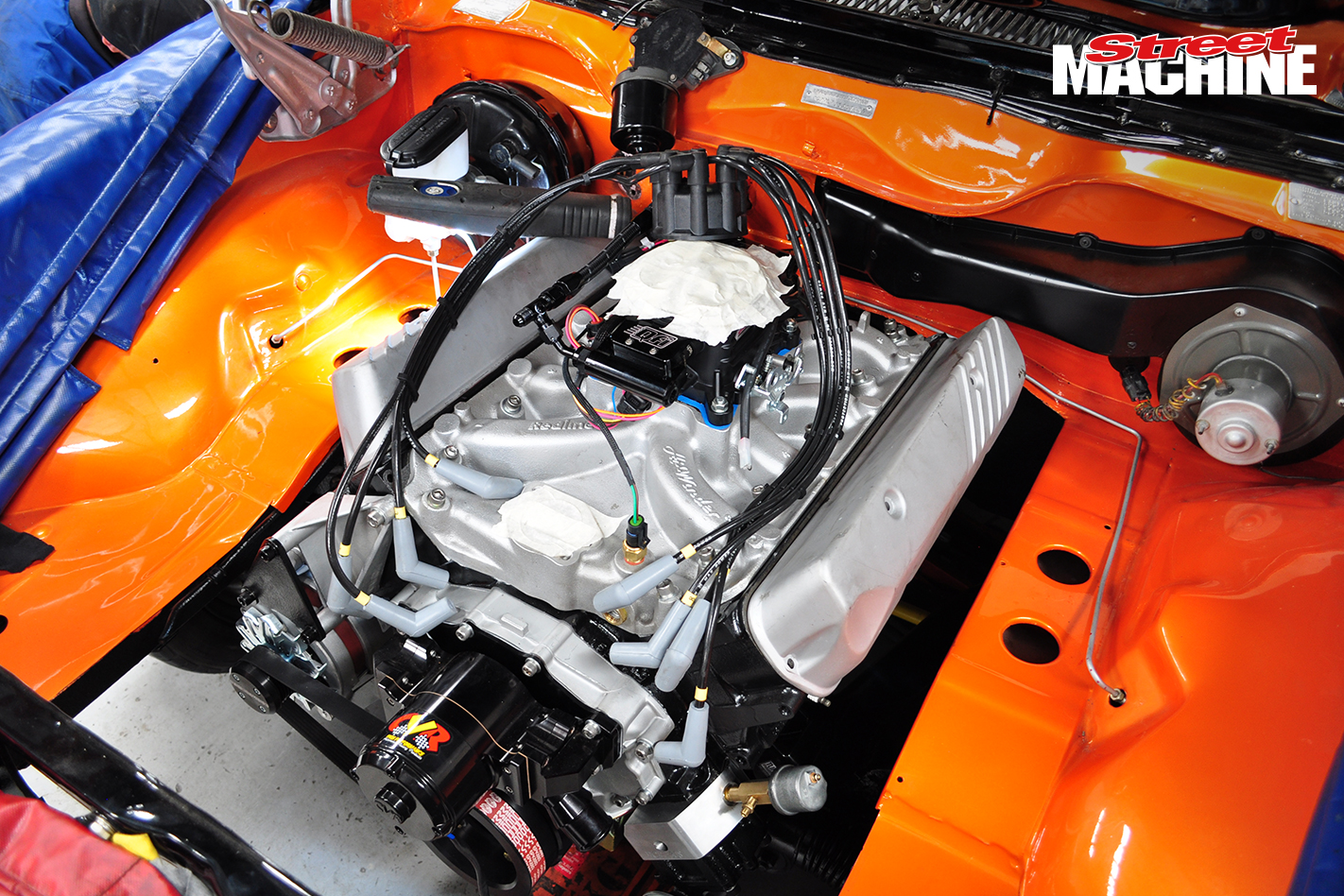 Now the engine and trans are in place, it’s time for some wiring and interior. Only two weeks until Summernats! 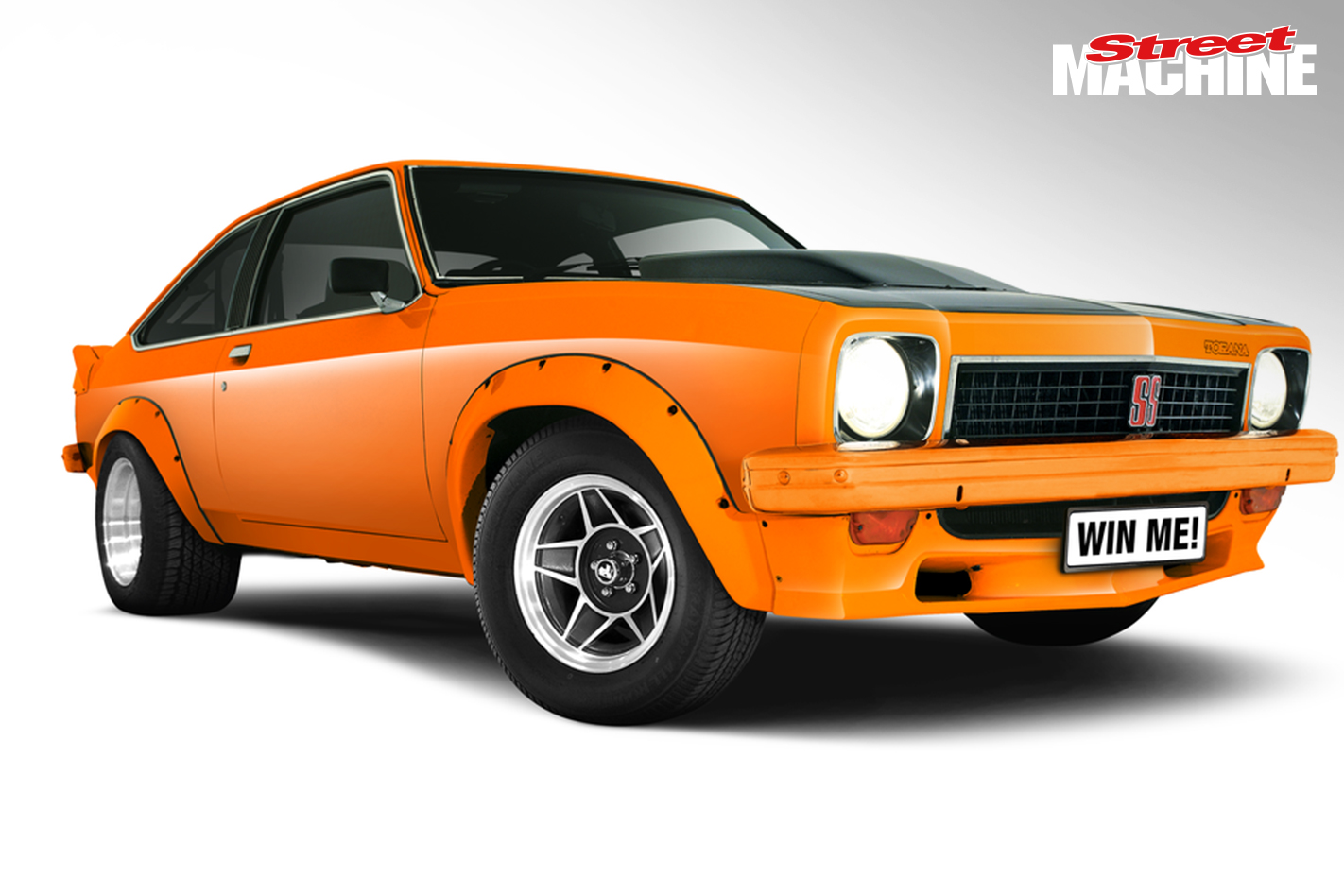 Here’s what it is all supposed to look like when we’re done. Who wouldn’t want that in their shed?