WHERE do you start when it comes to explaining all the things that have been done to this car? If you’ve been living under a rock for a while, I’m talking about Chris and Colleen Bitmead’s XBOSS Falcon, the XB coupe that took it to the Yanks and came oh-so-close to beating them at their own game. A Great Eight finalist for the Ridler Award at this year’s Detroit Autorama, XBOSS is arguably the greatest modified car ever built in Australia. Yes, there have been Aussies that have taken their cars over to the US and won some accolades; Rex Webster and his amazing FJ two-door is the first that comes to mind, and more recently, Mario Colalillo and Justin Hills with their wild custom creations. But no one – and we’re not just talking Aussies here – no one from outside North America has built a car to compete for the Ridler, let alone made it to the Great Eight. It’s a massive achievement by all involved and one that took more than eight years to complete – and before anyone starts on about it being a chequebook build, this car was legitimately built in Chris’s shed with just a handful of blokes doing the fabrication. Yep, unlike most of the cars that compete at this level, XBOSS wasn’t farmed out to some shop while Chris sat at home signing cheques. In fact, it was Colleen that signed the cheques – but that’s okay because according to Chris, it was all her idea anyway! 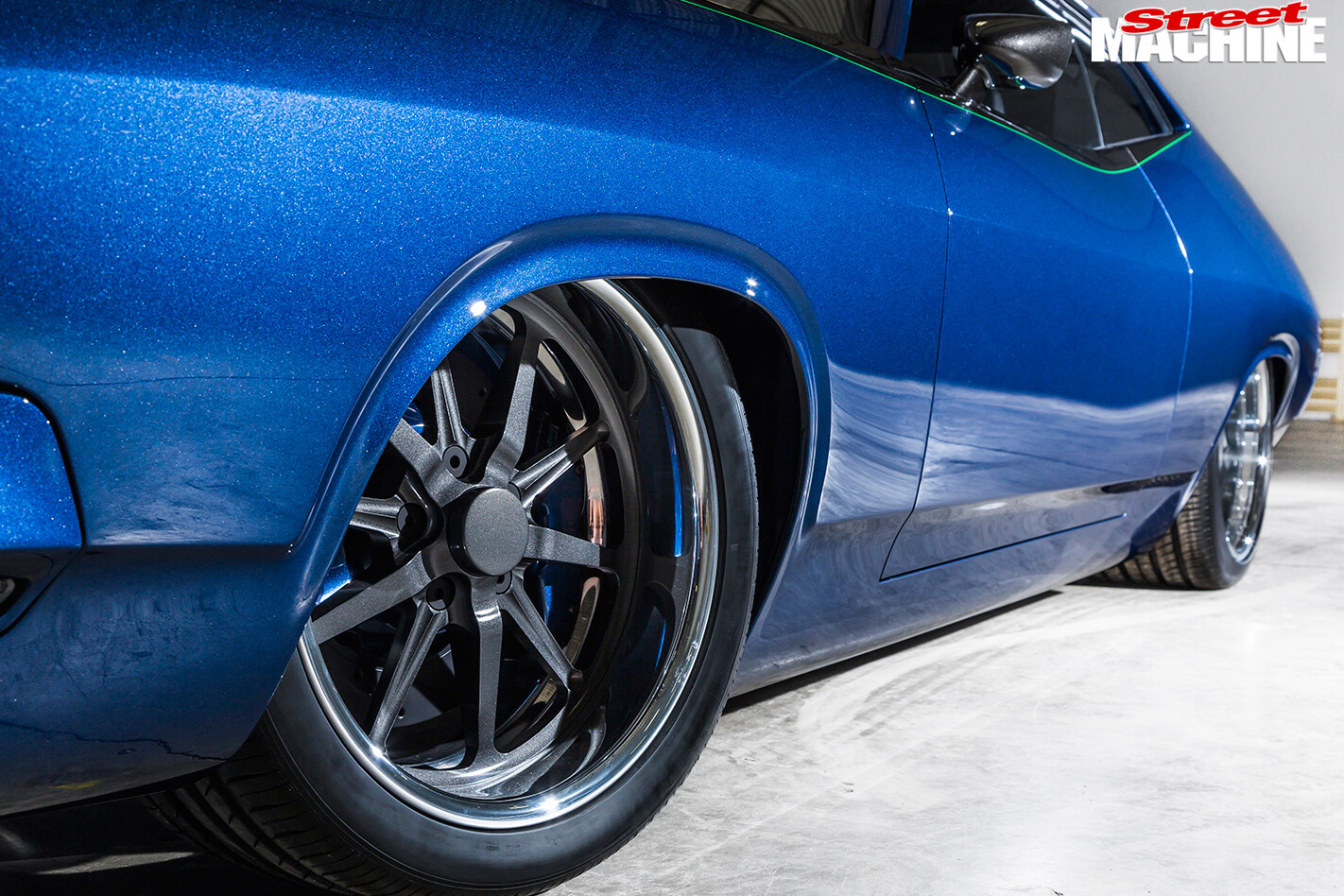 Like all well-planned projects these days, Chris used a designer to come up with some renderings, but instead of using local talent, he went to the US. “The reason I went to Don Vierstra was because I figured a lot of the Australian artists had done XBs for years, and I just wanted fresh ideas,” he says. The brief was pretty simple: The car had to be sympathetic to Ford Australia's iconic original design, not deviate wildly from it, but be different enough so that people would know things had been changed. Of course, being a Yank, Don only had photos to go off, but Chris did send across a 1:18 scale model of an XB hardtop for Don to work from. It’s testament to the soundness of Don’s design that the car stayed pretty true to those original renderings throughout the eight-year build. What wasn’t in the original plan was taking the car to the Autorama, but it became apparent pretty early on that they were building something special. “Originally I was going to build the car to do [Hot Rod] Power Tour, but it sort of got out of hand after a couple of years,” Chris says. “The exterior design was pretty much how it [ended up], although the bonnet was only going to open like standard. But the look with the chin spoiler was always going to be done. The tail section where the exhaust comes out through the middle, the Jag suspension, the modular engine, that was all going to be done, but it was going to be a stock-ish interior and have the standard glass, not flush-fitting.” 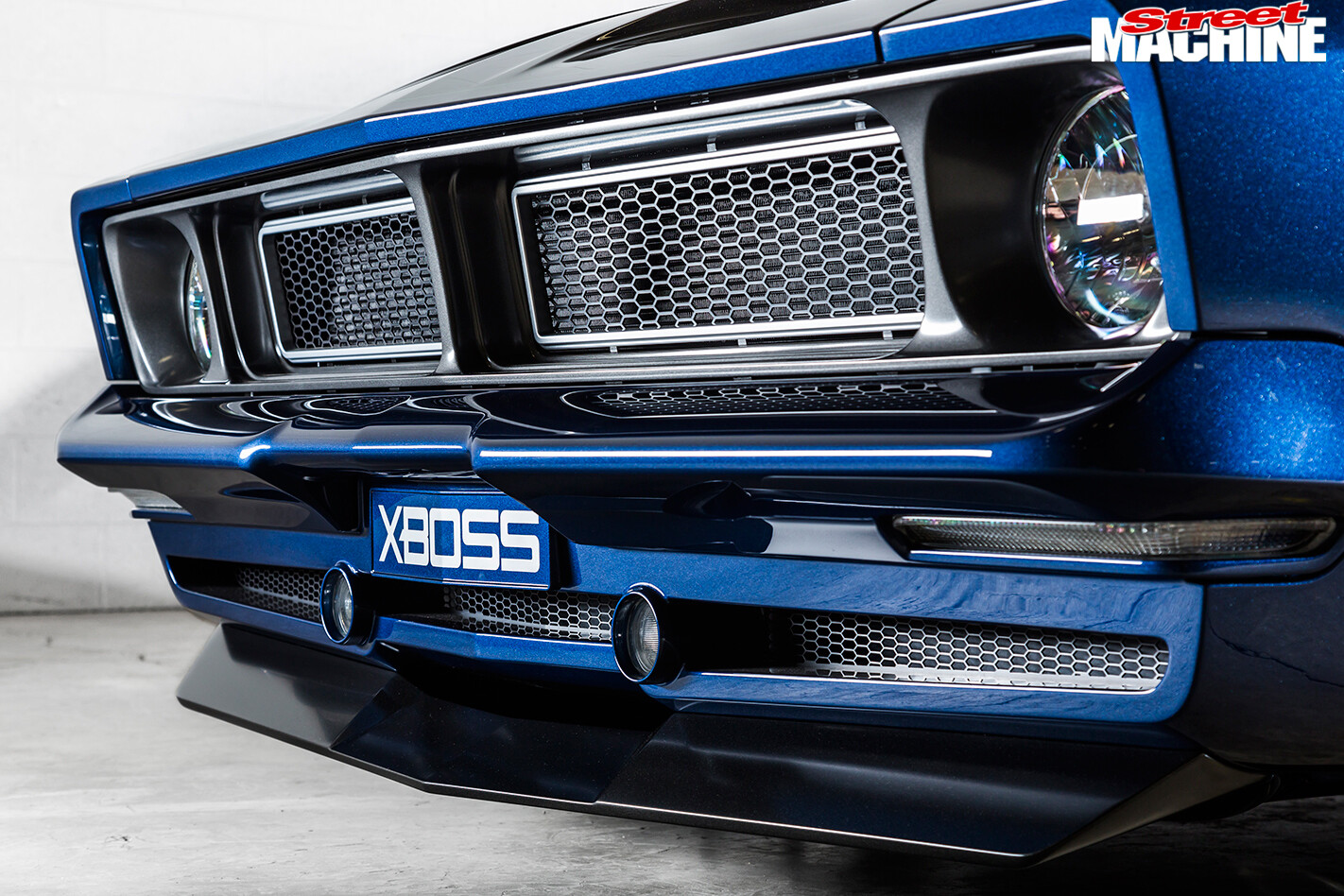 John Gilbert from Fantasy Customs was the man who turned Don's concept sketches into metallic reality, pumping the front guards out a total of 3.5 inches, creating the custom front beaver panel and chin spoiler as well as the custom rear panel that would eventually house the centrally located twin exhaust outlets. For all the GT restorers out there crying into their camomile tea, don’t freak out too much. Chris started off with a lowly Falcon 500 shell, and there was no driveline or suspension – perfect for what he had in mind. “The plenum was all rusted out and there had been some dodgy repairs done in the past. We put a new plenum in to repair it properly, and then chopped it out when we changed direction,” Chris laughs. The front and rear of the chassis had already been modified to take the Jag suspension, but then a couple of things happened that sent the build in a slightly different direction, which I guess you could say was upwards: “We bought the CL500 seats with the seatbelts built in, so we had to strengthen the floor up for that, and it was also at that time that John, who had done the full-metal interior for Mercules, said that he wanted to do the same for my car. That’s about when we decided to do something different and build the car for the Ridler.” 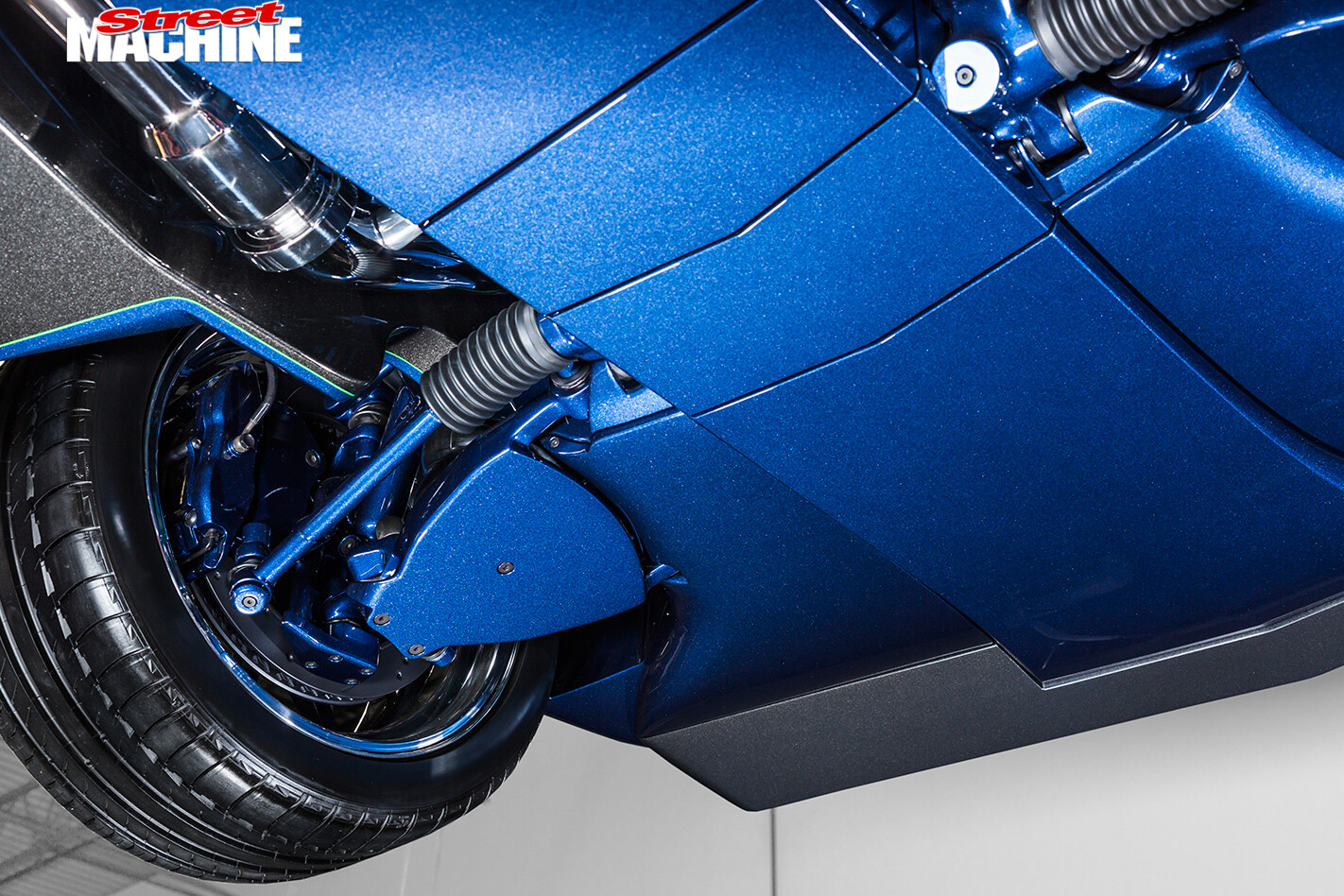 And just to make things tougher, Chris insisted that the XB had to be built to Ridler standards and yet remain a street car, registered in WA as an Individually Constructed Vehicle. A big ask, but this wasn't a task Chris took lightly, and he also didn’t enter into it without any experience. He’d already built one of the best hot rods in the country, a ’32 Ford coupe that was on the cover of SM Hot Rod in 2006, but competing with the big boys in the US was still going to be a pretty big step up. On the shed wall at the Bitmead ranch was the mantra that the car would be built to: Creativity. Engineering. Workmanship. These weren’t just some buzzwords to keep the guys in the shed busy, they’re basically criteria that have to be met if you even want to be considered for the Ridler Award. While some people might not understand why the bonnet and boot open the way they do, you can’t deny that those elements involved a hell of a lot of creativity and engineering, a lot of which goes unseen. 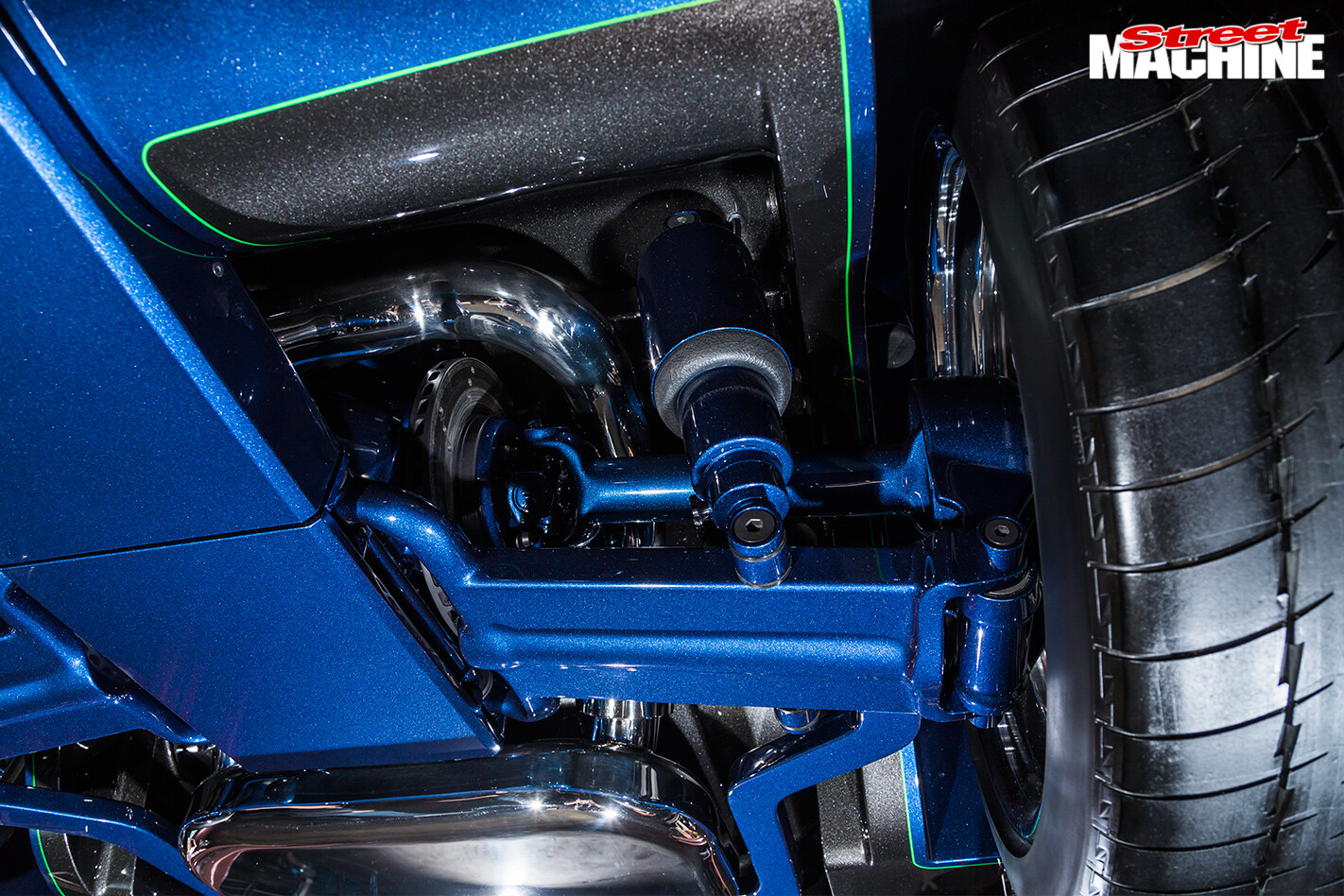 The workmanship, on the other hand, is plain to see. Just check out the paint finish on the suspension arms, or the way that 1.5mm pinstripe snakes its way around the undercarriage, even through the boot. 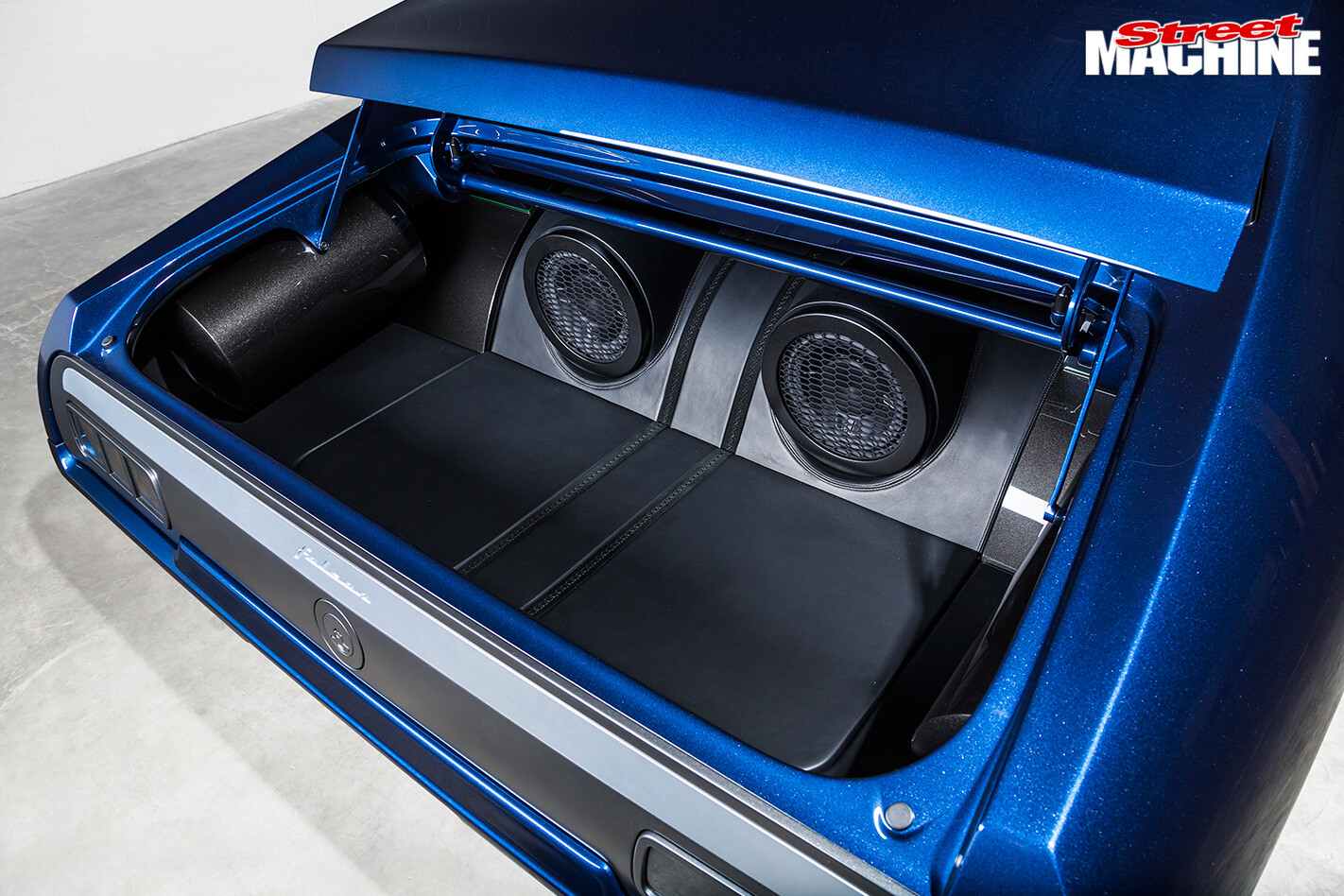 It is one of those cars that you can spend hours looking at – hell, we spent at least an hour under the car the first time we saw it, pointing at things and saying: “Look at this! Check that out! Look at how they did that!” Then we got up and started checking out the interior and the engine bay – it was a pretty long night! 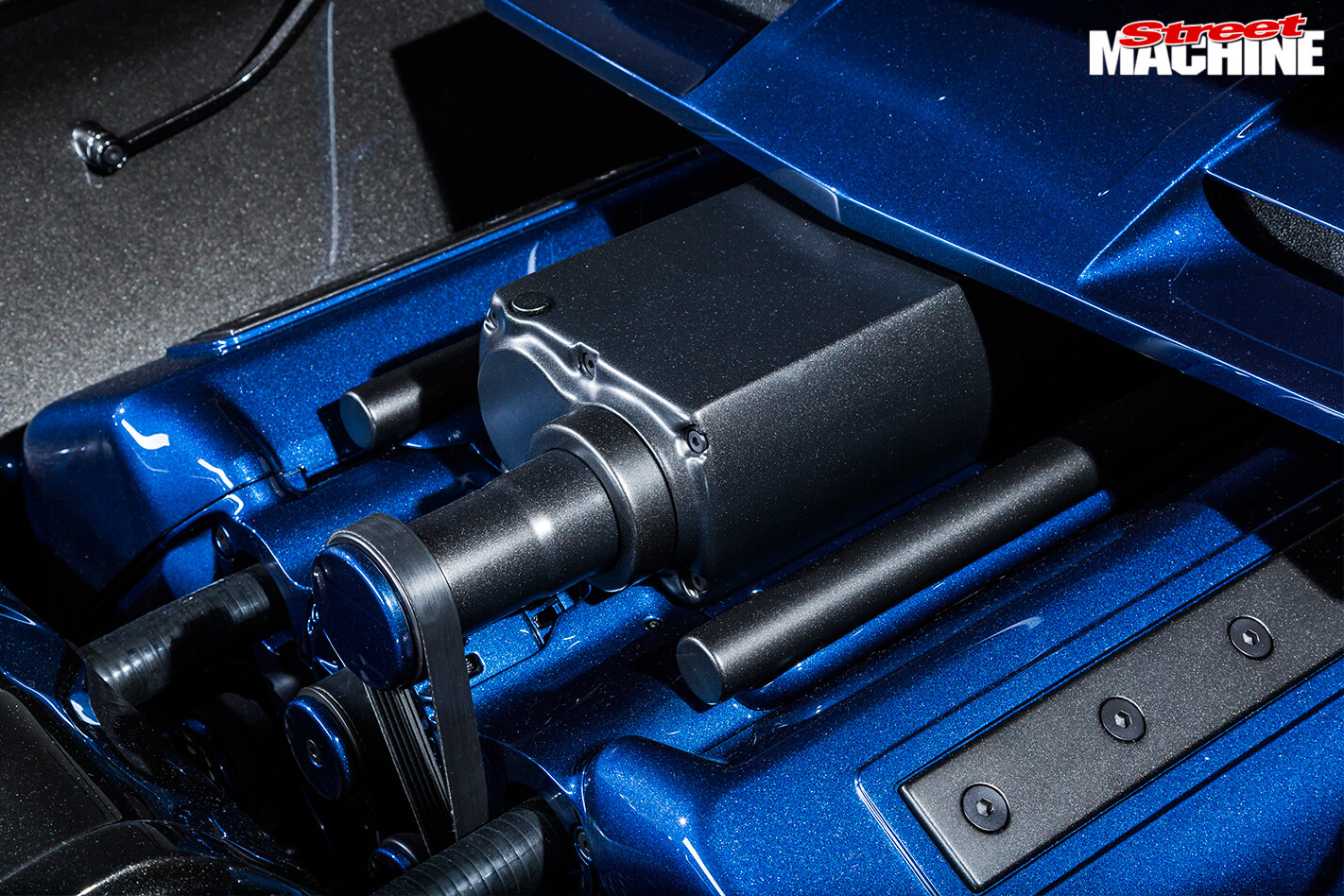 The decision to take the car to the Ridler was made pretty early, about a year-and-a-half or so into the build, so there was another six or seven years of solid work to get the car done. One thing Chris was adamant about was that near enough was not going to be good enough, and the guys involved with the build all stepped up to the plate. Travis Sparrow, Mark Allen, John Gilbert and Brodie Mitchell brought all their considerable talent to the build, and at the end of it all, they built an amazing car and are now even better at what they do. 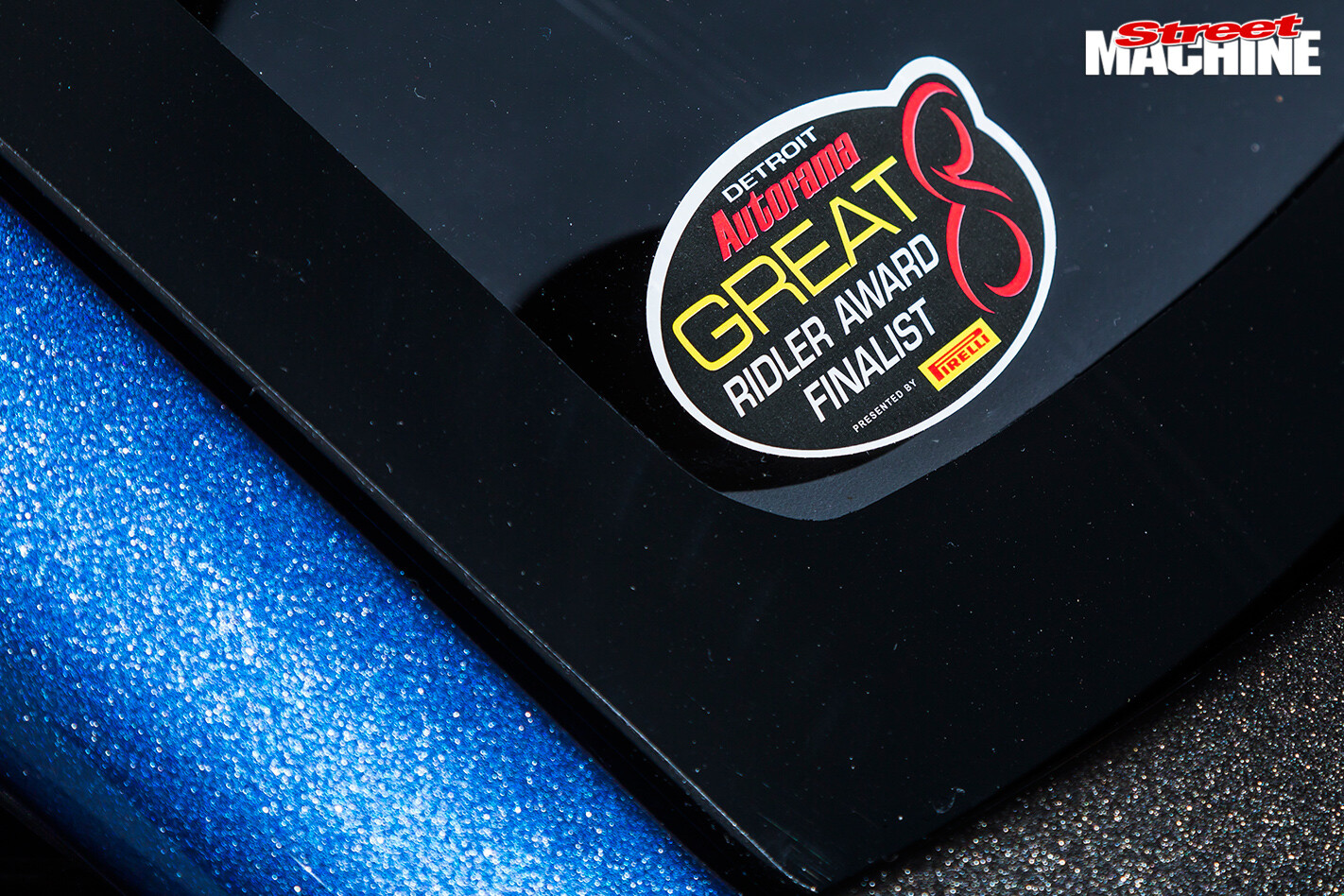 Surely a bunch of Aussies building a car in the back shed didn’t stand a chance against all those fancy big-name shops in the US? But that’s the thing about the Ridler; you never know who’s going to show up. Chris was pretty sure they had what it took: “We were reasonably confident that we had the skills to build a car that would make it into the Great Eight,” he says. “When we went over to the Autorama in 2012, Mark Allen and I had a look at all the cars that we thought were eligible and we chose nine, and out of those nine cars we chose the Great Eight. We chose the winner as well.” 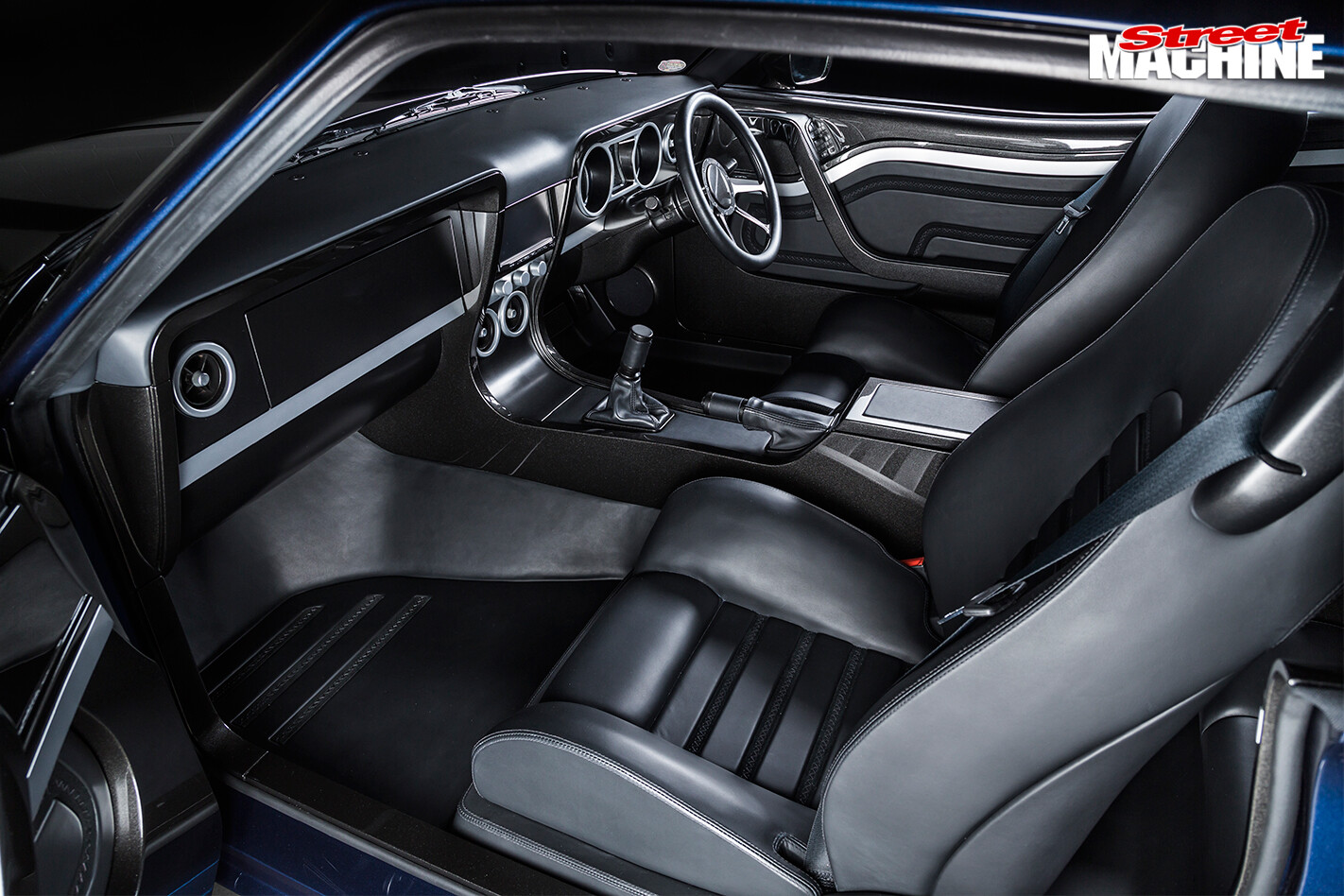 While it’s true that the majority of the fabrication took place at Chris’s home shed, when it came to body and paint, it was time to get the experts involved. Avon Valley Spray Painting in Northam had the unenviable task of painting the entire driveline and suspension, and the car also spent almost three years at Reaper Customs in Malaga, where they fine-tuned the fit and finish of every square inch of the body. From top to bottom, inside and out, every panel was finished off to the highest standard possible – the gaps on this car are unbelievably good. Once they were happy with it, the XB was given a quick black ‘jam job’ – you know, the kind that looks better than the paintjob on your own car. Reaper Customs was also responsible for creating the custom-mix PPG blue and grey, spraying out around 200 different options before Chris settled on the final combination. He knew what he wanted, both in colour and how the paint reacted to different sources of light. We did a pretty good job capturing it in the photos, but it’s something else in real life. What we didn’t get to see was the car out in the full sunlight, but that’s because we shot it in Detroit and it was snowing outside! 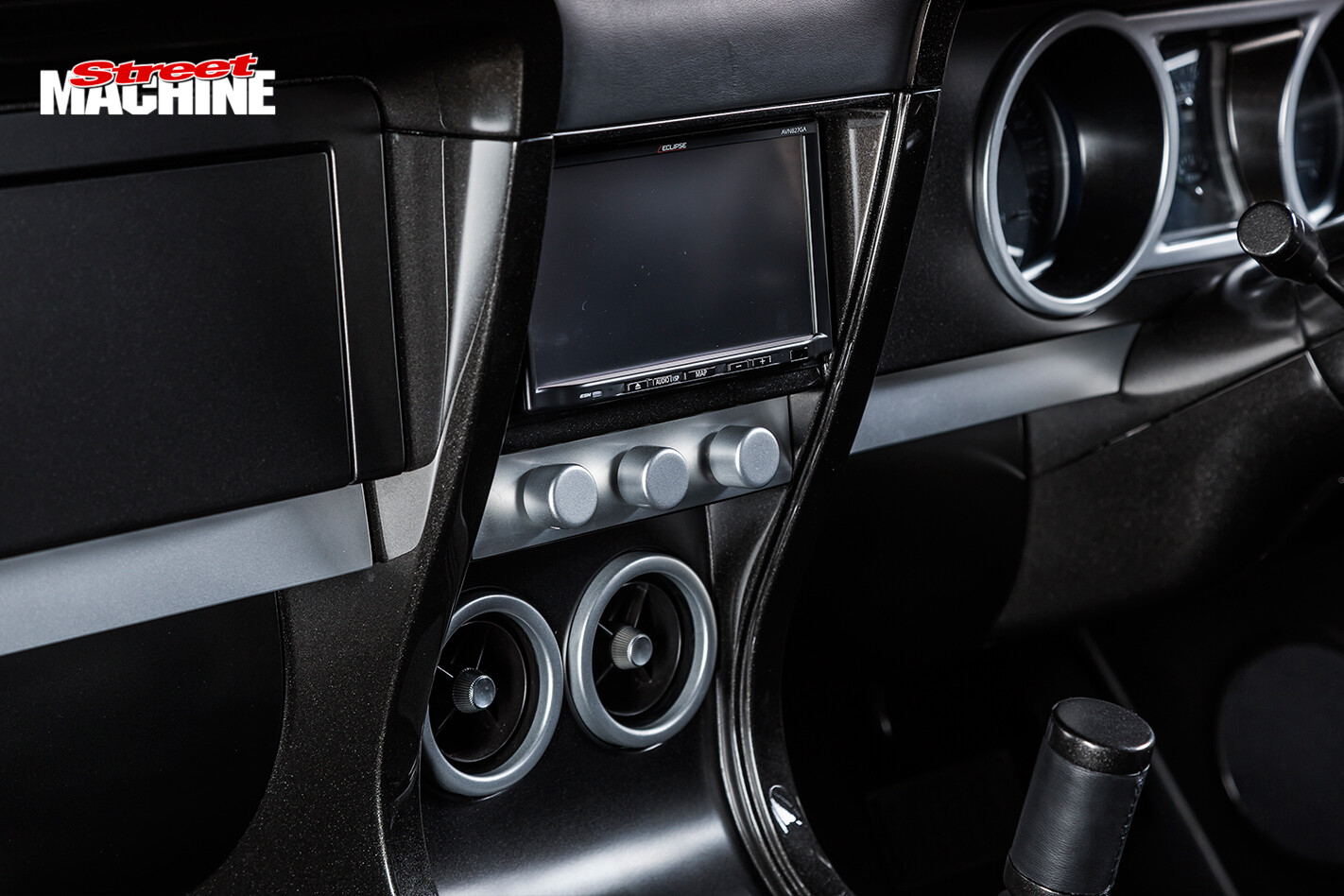 With the car missing a couple of deadlines, Chris decided to send it to Greg at Maskell’s Customs & Classics in Victoria to get the final paint finish applied. Chris knew Maskell’s had what it took to build a car to the highest level, as they had been involved with Gary Myers’s Silver Bullet Mustang, Leisa Chinnock’s PSYCHO XF and Karen Keves’s Mission Impossible HQ. 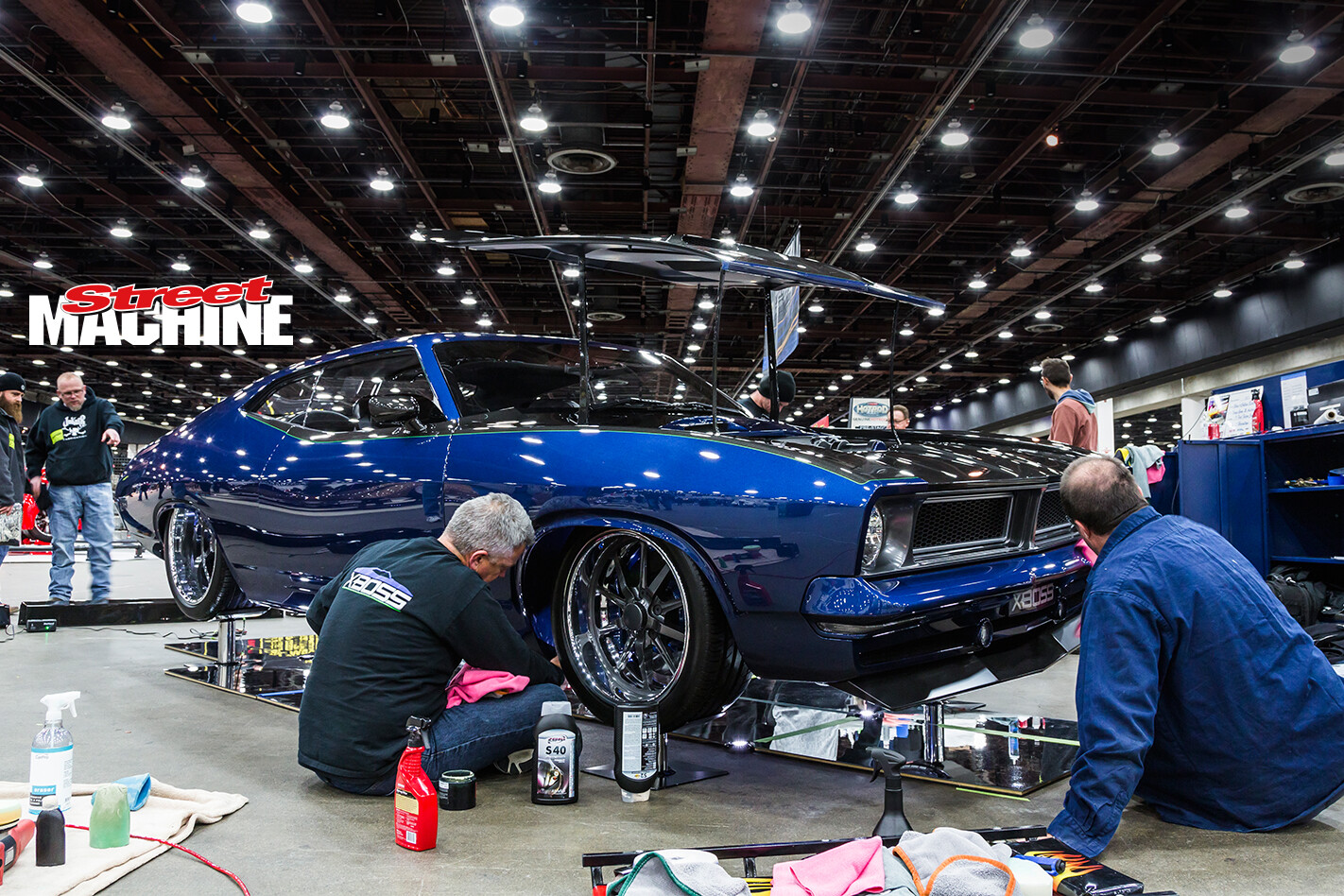 Greg’s job was to fine-tune the gaps and bodywork even further, before applying the incredible paint job. Check out where the different colours start and finish on the car and you can start to appreciate what a mammoth job this was. From there it was months of cutting, rubbing, buffing, polishing and waxing, while the rest of the build team assembled the car without putting any chips or scratches in it. Greg reckons there is 2500 hours in rubbing and buffing alone! Even after the car was sent back to Perth to get ready for shipping, Greg made multiple trips to Perth, including a 2.5 week stint towards the end, all in the pursuit of perfection. He then accompanied the car to Detroit and worked around the clock to get it ready for show time. When it came time to do the interior trim, Chris shipped the seats over to Michael Carter at Mick’s Custom Interiors (also in Victoria), where he covered them in charcoal leather and then hand-stitched the pleats. To complete the rest of the car, Michael flew across to Perth with his sewing machine in his luggage, and finished the work in Chris’s shed. 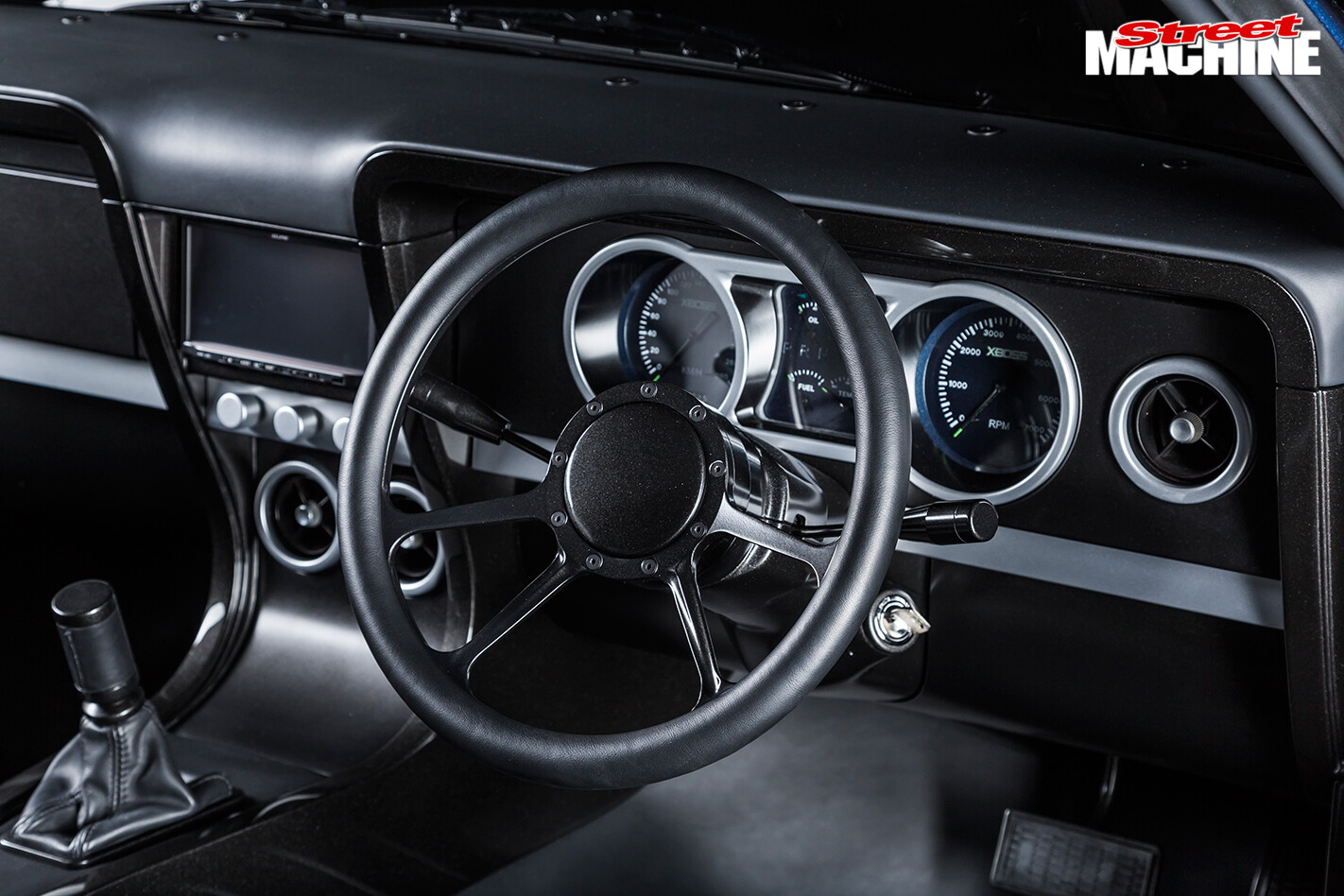 Chatting to Chris before he left for Detroit, I asked how confident he was about his chances. He said: “If there are eight cars there better than mine, then it will be a really good show!” As it turned out, there weren’t eight cars better than his, in fact there was only one or maybe two. 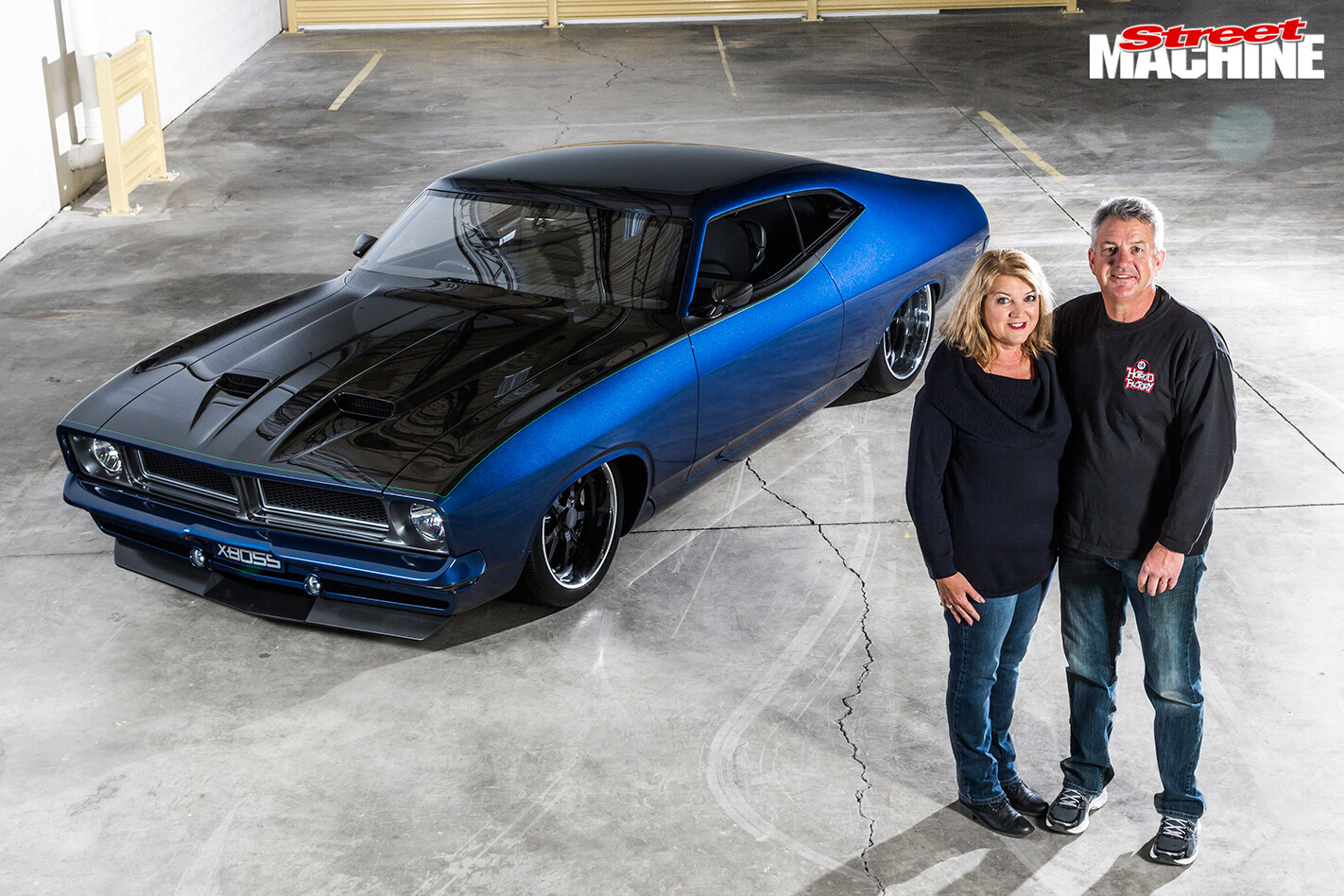 Best car in Australia? I think so, but it will only be a matter of time before someone steps up and builds an even better car – and that can only be good for the Aussie street machine scene.