IT WAS never planned that way, but after my Discovery TD5 had been sitting idle for around a month, welcoming ten generations of arachnids and their webs, and looking distinctly forlorn in the driveway, the fact that it would no longer start was both unsurprising but also a nice surprise at the same time.

The reason behind this slightly odd statement is that the Disco’s failure to start gave me the chance to test the NOCO Genius Boost HD GB70 Lithium Ion Jump Starter (yep, it’s a mouthful), a recent arrival to the 4X4 Australia shed. 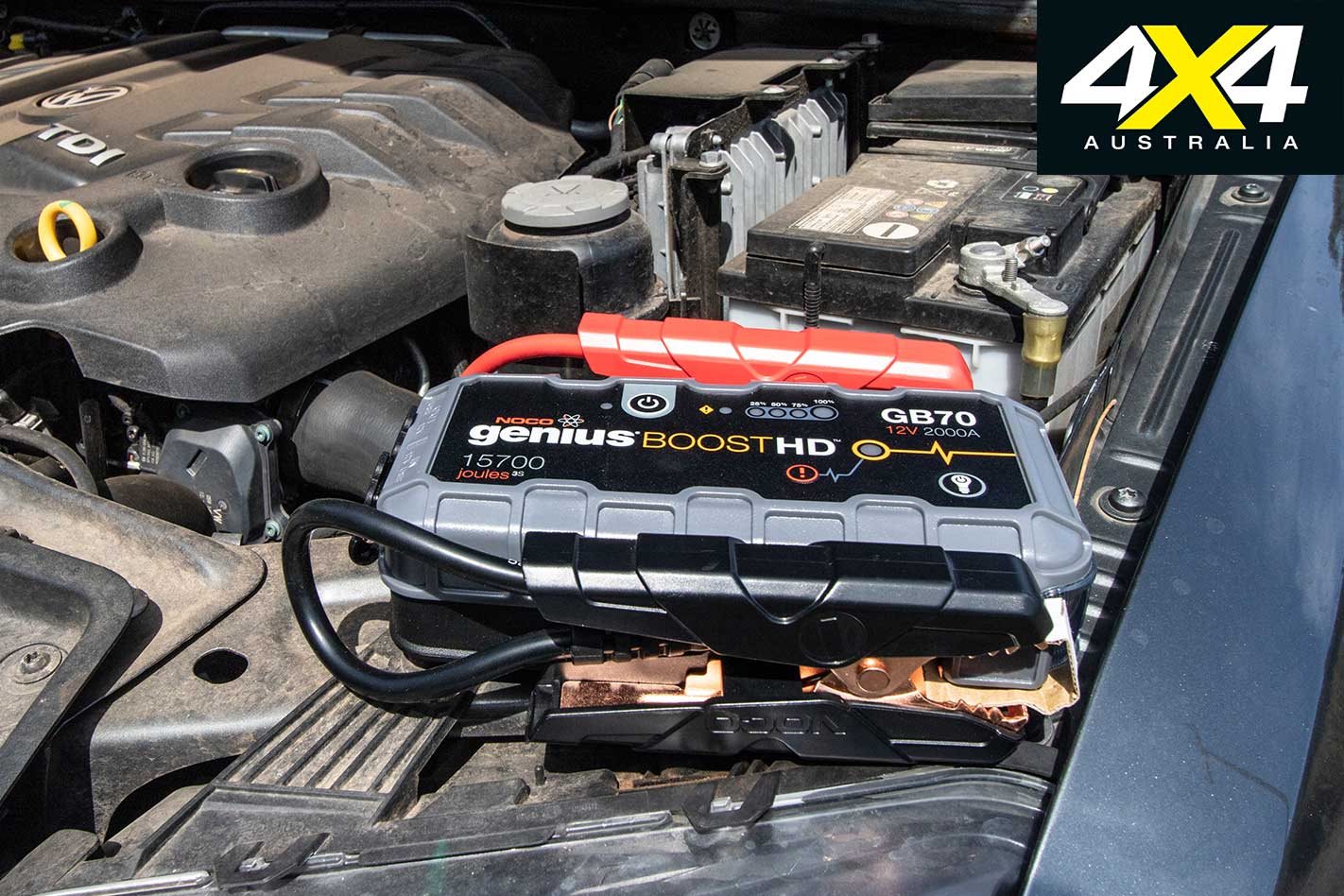 The NOCO GB70 (for short) is a 2000amp 12-volt jump starter that is claimed to be capable of jump-starting diesel engines of up to 6.0 litres capacity – and big 8.0-litre petrol donks as well. Not that you’d guess its propensity for grunt, going by the size of the thing; weighing just 2.3kg and measuring 185mm wide, 315mm long and 92.5mm tall, it’s amazing how much power tech NOCO (a US-based company) has managed to jam inside the GB70.

On top of all that is a light – and not just a basic one, either – which has seven modes and produces 400 Lumens of output, making it a very handy camp-light option or when you need some illumination for under-bonnet work.

Along with the usual protection against reverse polarity, sparks, overcharging and overheating, the GB70 contains a USB port for device charging, 12V power outlet for your air compressor, inverter or camp lighting, and a claimed 40 jump-starts per charge.

Recharging time is between two and three hours from 12 volts and, depending on the USB charger’s rating, between seven and 28 hours via USB. I charged this unit initially from my PC at the 4X4 Australia office and it was ready to go after a full day in the office. Other spec highlights include a claimed operating temperature range of between -30°C and +50°C. 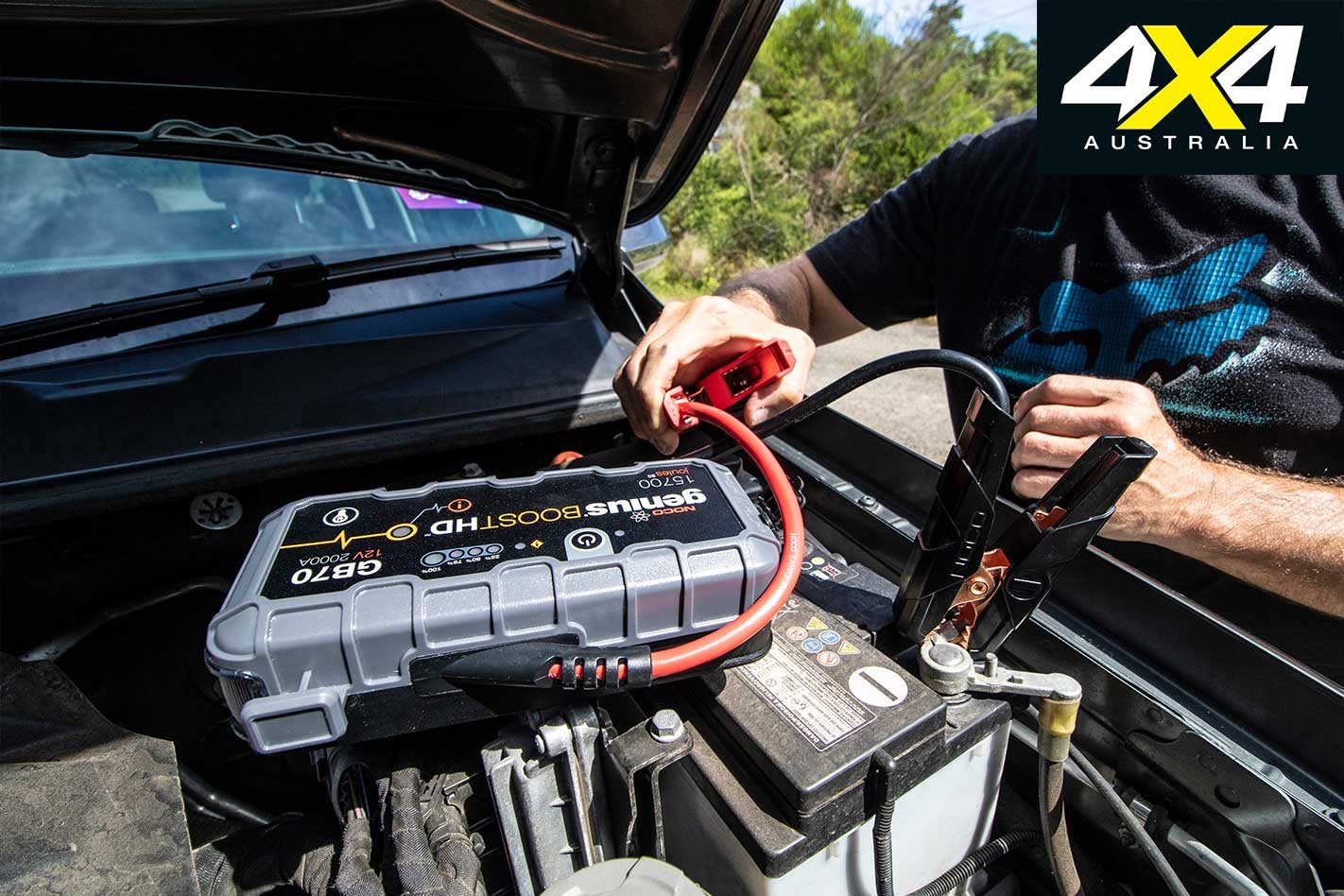 Thankfully, I have only needed to jump-start the Disco once, and it was a simple process (as they usually are). The compact size of the GB70 means it can be stored in one of the side storage bins in the Disco’s cargo area, so it was just a case of grabbing it, removing it from its material carry bag and connecting the alligator clips to the Disco’s battery terminals. Then it was just a case of turning the key and the distinctive sound of that TD5 donk was back.

The GB70’s compact size means it doesn’t need to take up much space when charging, which comes in handy as the GB70’s power leads are decidedly on the short side in terms of length. This is the only negative of the unit, with the result being the GB70 has to be placed very close to the battery that needs jumpstarting for it to be able to be connected.

It wasn’t a problem with the Disco, but it may not be that easy with other vehicles. The leads are easy to manoeuvre, but they could do with being at least another 100mm to 150mm longer.

With its compact dimensions and user-friendly operation, the NOCO GB70 could be a very handy addition to your shed. The fact you can (once it is charged, of course) store it easily in your rig means it is also super convenient – after all, if it ain’t there, you can’t use it.

Don't leave for the tracks without 4x4 gear

RATED
Available from: www.no.co
RRP: $350
We Say: Compact and versatile, with plenty of oomph.