As the road train in front of us lumbered towards some far off destination, the odour of cattle wafted into the cabin of my new Land Cruiser ute.

But it was the truck’s sudden uphill change in direction that really got my dander up, when gallons of effluent suddenly came out of pipes hanging suspiciously at the rear of the stock crate. For the following 10 seconds, my car became a magnet for this ooze and the result was a new, and unwanted green and brown paint job resembeling camo.

This rather annoyed yours truly and I duefully instructed the person driving to “get past the bloody thing, at any cost.” Maybe I should have given him a safety briefing that specified, at “any cost” other than our lives.

Now, anyone that’s travelled on outback roads will know from the signs that road trains can be in excess of 50 metres long, so that’s a lot of rig to pass.

My new V8 turbodiesel Land Cruiser ute would have normally been up to the task of overtaking the truck but, with a trailer attached and running into a head wind, this was a big ask of the Tojo. The overtaking manoeuvre started well but nearly ended in disaster. It was there and then that I thought I’d see whether there was a power upgrade that would save me from ever having to send my pants to the drycleaners again.

I checked out a few brands and settled on one, which I’ve happily used now for about five years. But technology further developed and new engine models and fuel management systems became available, so it was time for me to see how far things had come.

Unichip came to my attention for a number of reasons. I wanted a system that would suit my vehicle in a range of scenarios – for instance, towing. Some jobs require that I tow a trailer.

On one trip, I took gear to a scientific expedition in the northern Simpson Desert, and my vehicle and trailer combination went over the weighbridge at close to six tonnes. So, low-down grunt and maximum torque for overtaking long road trains is essential.

Then there’s the need for a neat and nimble set-up when there’s no load on the vehicle and it’s just a run-around, requiring almost standard off-the-production-line specs. And sometimes you want an in-betweener, where a little more power goes a long way.

Well, the Unichip is so advanced that all of these scenarios are covered. It comes with a dash-mounted module that allows you to change the mapping of your engine to suit your situation. Switching from standard mode to higher power is just the touch of a button away, but what is even better is that it can be done on the fly. For example: if you were driving in standard (factory) mode and wanted to overtake the vehicle in front, that’s fine. But if you found you weren’t making forward progress quite as quickly as you thought, just press the button and instantly you will have up to 30 per cent more power and nearly 60 per cent more torque.

The figures and the change in engine performance are what I can only describe as astonishing. Having said that, though, it’s all done within specs of what the motor was originally designed to do. But, for once, the motor has been tuned perfectly at every operating step.

Installation generally takes a couple of hours, and mapping of the new set-up means that your car will spend most of that time on the dyno, tweaking the engine ’til peak performance is achieved.

The Unichip has taken my standard TD V8 from being a great all-round engine and drivetrain combination to a fire-breathing, angry and determined savage. And, because my engine has finally been tuned properly, I’m using less fuel at every stage in the programmed settings. 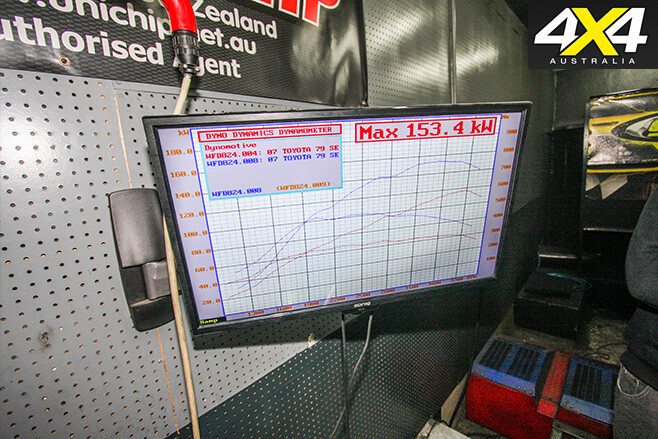 Engine output has gone from 117kW to 154kW and torque from around 300Nm to 500Nm (measured at the tyres). The guys at Unichip said that these figures are typical performance improvements, but they are also absolutely positive that it will not harm the engine. The engine is still running within its rated tolerances and the benefits are increased power and torque, with a reduction in fuel use.

In addition, I asked for the Bluetooth upgrade, which means I can control the whole engine mapping system from my smart phone. It even has an immobiliser setting that will only allow your engine to idle. Even if you slam your foot to the floor, the engine will continue to purr as if nothing is wrong.

How it works
The system is best described as a ‘piggyback computer’, because it doesn’t alter the standard ECU set-up. Instead, it allows the independent of variables such as fuel:air ratios, boost, and timing.

Unichip’s advantage over most other systems is that it’s individually programmable by trained technicians, using a chassis dynamometer to set the unit to each engine’s requirements and driver parameters.

This process can best be described as ‘live’ or ‘real time’ tuning. Once the Unichip is fitted, the vehicle is run on a chassis dynamometer. The technician can then adjust the timing and air-fuel ratios, while watching real-time power and torque readings, to set the optimum and most efficient settings for the job. 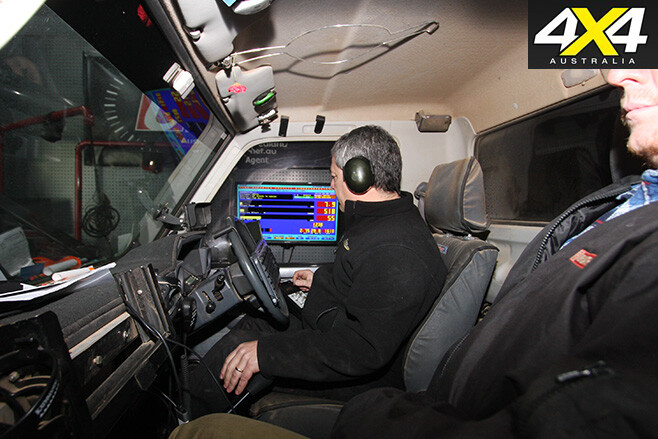 For example, if the main driver of the vehicle only tows for a couple of months of the year, then, using one of the five map settings, the vehicle can be tuned to cater for the increased load and subsequent drag. Once home, the driver can use a smart phone app or in-dash switch to set the computer back to standard.

So, there are actually five map settings that can be programmed into the Unichip, giving a range of correctly calibrated, tuned and efficient settings for all of the vehicle’s needs.

Another advantage of the Unichip is that it can be adjusted as more modifications are made to your four-wheel drive. If say a different exhaust, or higher profile tyres are fitted, the computer can be adjusted so that the vehicle will still be running at its most powerful, yet efficient, settings. While the Unichip mightn’t be the cheapest ‘chip’ on the block, it has to be one of the most versatile. When it’s time to upgrade your 4WD, just uninstall your Unichip and, according to the manufacturers, there’s a 99 per cent chance that it will fit your new car. A quick run on the dyno and new settings downloaded and you’ll be on your way to more efficient and safer driving, getting power to the drive wheels in the safest, most cost-efficient way.

For once, my vehicle doesn’t belch out clouds of unburnt fuel. And the reason for that? It is finally tuned specifically for the vehicle’s tyre and accessory set-up, and my engine is properly tuned.

The Unichip Q4 for the TDV8 70 Series starts at $1924 plus fitting and tuning (which varies from workshop to workshop)
Optional Bluetooth Map Select Switch adds $390. to the cost.