When it comes to touring this grand country of ours, the Top End is one of my all-time favourite places to visit.

Think of it like this: a warm tropical climate, untouched wilderness, unreal fishing, tons of wildlife and thousands of kilometres of tracks all meshed together to make one epic off-road adventure.

I’ve been up that way numerous times thinking I’d get the bug out of my system, but to tell you the truth it’s like scratching a mozzie bite – the harder you scratch, the itchier it gets! The thirst for a wicked off-road adventure just gets crazier and crazier until it basically takes an allout assault for it to be satisfied – for a while.

This time around I’ve opted to bring along the quad bike to make things a little bit more interesting, but in order to do that the old camper trailer had to undergo a few major modifications. In fact, it’s a completely different set-up than it was only a few months ago. So let’s check it out!

WHY A ROOF TOPPER? 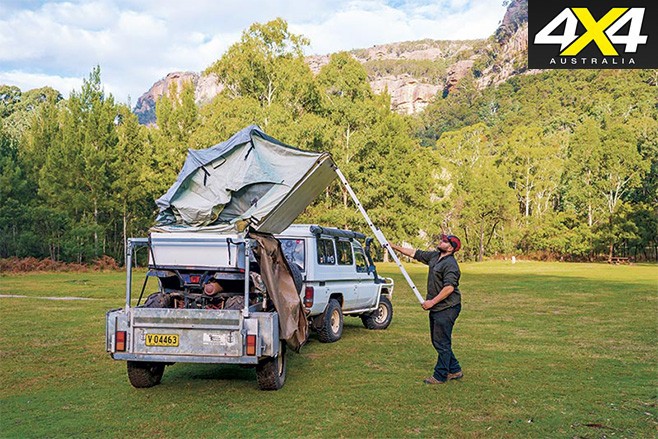 Originally, this trailer was a custom-built soft-floor camper. However, bringing the quad bike along for the ride meant it would need the entire trailer tub. With plenty of snapping handbags up north, I’m not real keen on swagging or tenting, so the old soft-floor tent got the flick, along with the slide-out kitchen and internal water tank – and the roof topper got a new home.

The good things about roof-top tents are their light weight, that they get you up nice and high, and it doesn’t really matter if the ground is rocky or muddy.

So I built a frame out of box tube for the tent to sit above the bike. The only problem was I’m not a contortionist, and to load the quad bike up and under the tent proved a bit of a problem. The fix was actually quite simple: build a tilting frame. Using a 50x50x1.5mm square tube, I made a second frame on top of the other that articulates on a few heavy-duty bullet-style hinges. It’s latched down with four over-centre latches and uses two 800mm struts to help open up the frame. Now I simply tilt up the frame and load on the bike. 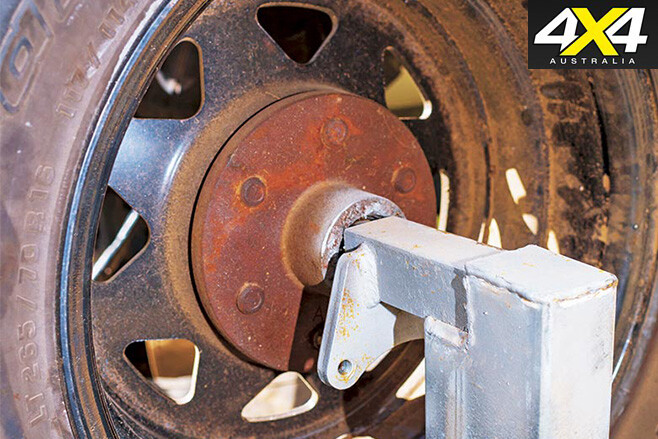 One of the bare basic spares to carry for any trailer is spare wheel bearings; a complete spare hub is even better. I’ve been caught out once when the bearing seized and the wheel flew off down the side of a mountain as it tore the stub axle in half – I never saw the wheel or hub again!

So this time around I opted to get rid of the old spare wheel mount and replace it with a 45mm stub axle. This has allowed me to install a complete spare hub with brand new bearings, all greased up and ready to go. Plus the wheel bolts straight to it, so you’ve also got spare wheel nuts and studs. How’s that for thinking outside the box? Naturally, changing the trailer’s set-up impacts the overall weight, which means the suspension handles the load differently. This trailer has been set up with 60-series LandCruiser leaf springs, which are tough as teak but can be pretty damn rough if you don’t get the spring rates right. So once everything was built, I loaded it all up and took the camper down to the public weighbridge before deciding what to do with the springs. The springs have had a leaf removed to soften them up a bit, and I’ve gone with a decent set of shocks as well, for a more cushioned ride. I can tell you right now, you’d think it was coil sprung by the way they soak up the bumps.

Apart from that, I have also built a custom set of super-heavy-duty leaf spring mounting plates (6mm plate). It’s a bit of overkill, but who’s complaining? I’ve mounted a spare leaf to the front of the trailer as well. Usually you can get away with just replacing the one main leaf if things do end up going down the gurgler. 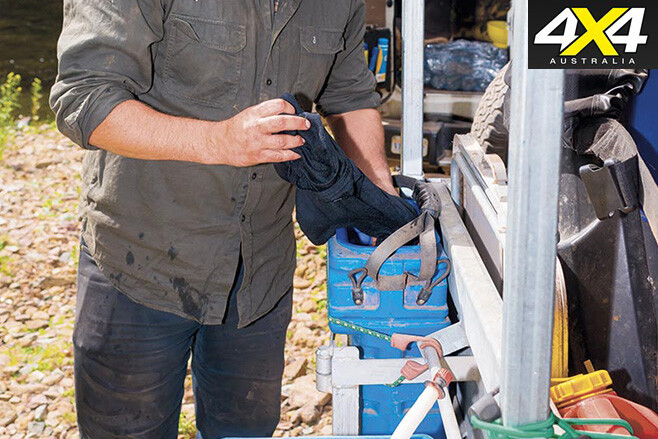 It’s often the little things that make a big difference when you’re travelling over harsh and remote terrain. One thing I’ve learnt first-hand is to put a bit of rubber between your jerry can and the jerry can holder to stop the metal rubbing a hole through the plastic. If you’ve got the open-style holder that leaves the front of the jerry can exposed to rocks, it’s also a good idea to place a strip of rubber or Corflute in front to help keep it protected.

The other thing I’ve done is fit a full-length drawbar stoneguard from Adventure Campers. The main advantage of this design is it doesn’t restrict access to the back of your 4WD, and it doesn’t flick stones at your back window like traditional stoneguards can. 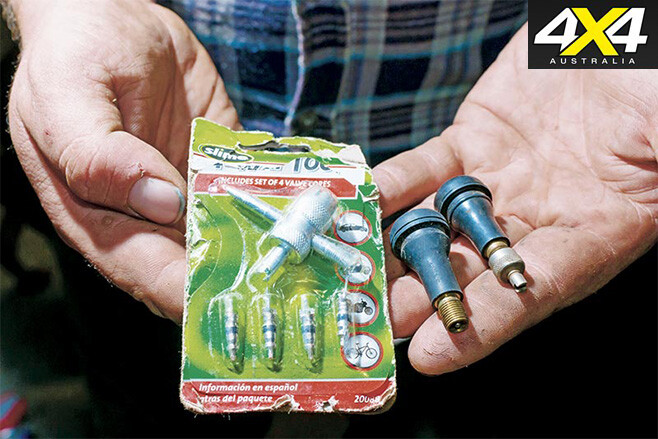 Now I know what you’re thinking – everybody needs a tyre repair kit, and that’s 100 per cent true! However, there are a few little extras that aren’t always in your kit but are worth their weight in gold. Spare valves are essential, especially if your tyre deflator is the type that removes the valve to drop your tyre pressure – I’ve lost count of the number of times I’ve lost the valves altogether. The second thing is a valve removing tool. Keep a few of them around your truck as you never know when a valve will need to be nipped up.

Also, keep a few valve rubbers handy, as they are prone to fatigue. Last but not least is a spare tube. I’ve kept a spare tyre tube in the back for years. In fact, a lot of the time it saves me from carrying a second spare. Plus, when you rock up to a swimming hole, there’s nothing better than pumping up the tube and floating downstream on it! 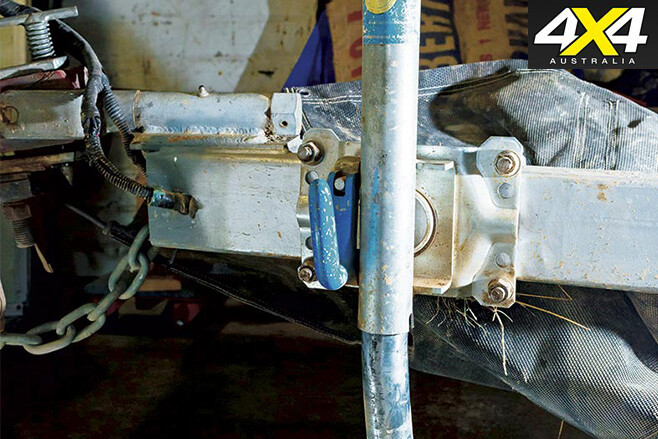 One of the first things to get damaged on a camper trailer is the jockey wheel and auxiliary plug. In fact, my jockey wheel copped a beating the first trip it went on. So instead of sticking with the swing-away option, I’ve opted for a removable one.

I’ve also remounted the auxiliary plug up nice and high on the rear bar so it’s not the first point of contact. 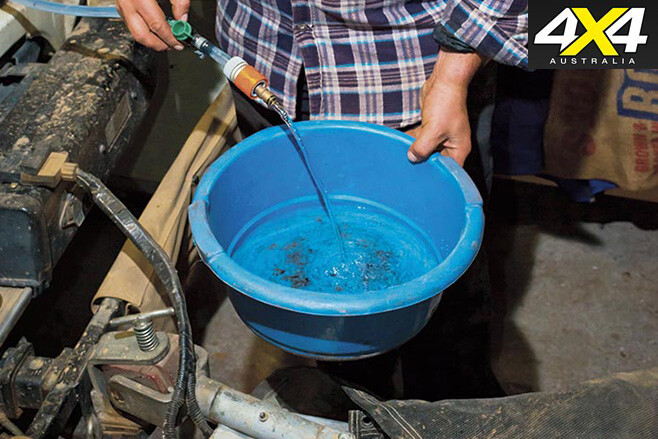 With no water tank in the Troopy or camper, I was trying to figure out a super-easy way to carry water and keep it accessible. I ended up mounting an everyday plastic jerry can up on top of the Troopy’s drawer system. I then attached a plastic hose to the tap fitting, and ran it out to the back. There’s a tap fitting at the end, and it clips up nice and high. Not bad for a $30 water tank, eh?

HANDIER THAN WHAT YOU THINK
Over the years I’ve come across a few unexpected items that are dead-set worth their weight in gold. I like to go by the old backpackers’ rule: only pack things that serve multiple purposes. So here are a few items out of left field that could be worth throwing in your box of tricks:

TARP ON
First up is the humble tarp. It’s dead-set got a million uses out in the bush, from serving as a groundsheet under your camper at camp (or while you’re getting into a trackside repair) to a makeshift water bra and even an emergency shelter. Next up is a can of water dispersant, like WD-40. A few thousands kays of dusty tracks can take a real toll on a 4WD, so I like to give the door locks and hinges on the 4WD and camper a quick spray every week or so. The awning and tent zippers love a good spray to keep them from jamming up and, if you’ve drowned your petrol engine, it’s great for drying out the ignition distributor, as well.