How to convert a Land Rover Defender from manual to auto

The aftermarket comes to the rescue again, this time converting the manual-only Defender into an auto cog-swapper.

The thrill comes from making do, feeling every rattle and bump, cooking off the tailgate and expertly balancing the clutch and accelerator to negotiate steep hill climbs and swollen river crossings.

For others, they’re a tool to get them to the farthest reaches of the country, the stunning red gorges of the Kimberley, or the endless alpine peaks of the High Country. The destination is as much a part of the adventure as the vehicle, so the more comfort you have on the long journey there the better.

We try and show a healthy mix of both in the pages here at 4X4 Australia, and the gear to build either style of vehicle. 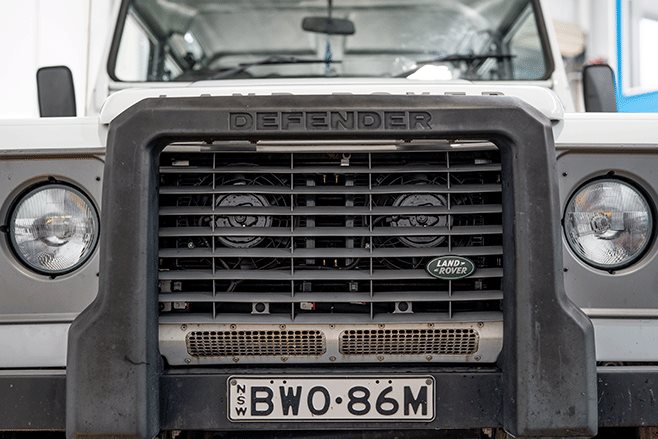 This time on the inspection block we’ve headed out to Western Sydney-based Davis Performance Landys (DPL) to get up close and personal with its auto-converted Land Rover Defenders.

The classic boxy style, live-axle rigs now shift smoother and faster thanks to their wizardry, something that the purists probably turn their nose up at, but has the owners reaching for the keys time and time again.

So what exactly goes in to the conversion, what does it cost, and how smooth is the final product? You’re only a few short pages away from having all the answers.

WHY WOULD YOU DO IT?

THE auto versus manual debate has raged on for a couple of decades now. The old adage that autos were for going up-hill, and manuals for going down rang reasonably true back then. But there’s a very big problem with that theory: technology moves on, and while manuals are largely untouched, automatic transmissions have jumped forwards leaps and bounds.

Auto-converting an older 4x4 does a few things for driveability that you simply won’t be able to get with any other modification.

The first, and most important to us, is an increase in off-road ability for a few different reasons. The transmission used in this case has a lower first gear ratio than the manual gearbox it’s replacing. That directly translates to more controlled low-speed work and more power on take-off, helpful for towing or steep terrain. 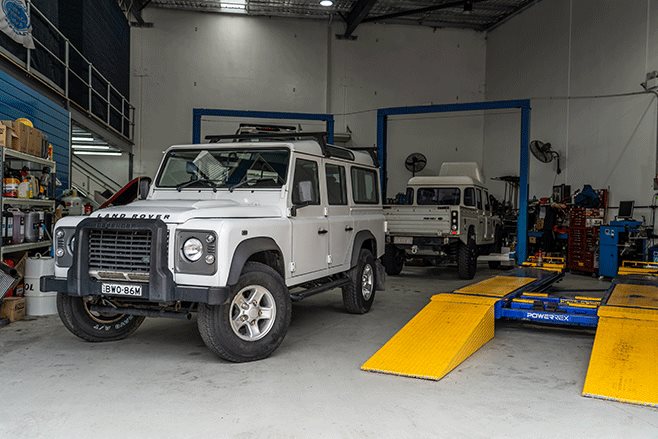 The second is having a torque converter rather than a clutch gives smoother application of power than the old manual ’box, and, through torque multiplication in the converter, an even bigger boost in low-speed take off.

The other additional benefit is by swapping out a five-speed for a six-speed the top gear is taller than factory, this results in a lower rpm at freeway speeds, and a direct reduction in fuel economy.

“They’re just far easier to drive too,” added DPL front man Bruce Davis. “The owner (of the white Defender) wasn’t driving it much, but now he drives it all the time. It means anyone can jump in it and drive it.”

WHAT’S IN THE BOX

MUCH like manufacturers develop lines of vehicles like the Defender, they develop lines of engines and transmissions, too, which is where you get catchy names like Powerstroke and Duramax. In many cases it’s simply a marketing ploy, with the engines having very little compatibility between different members of the same family. Other times, they’re near identical. This gets even more confusing when manufacturers do joint projects like the BT-50 and Ranger and start interchanging various components. 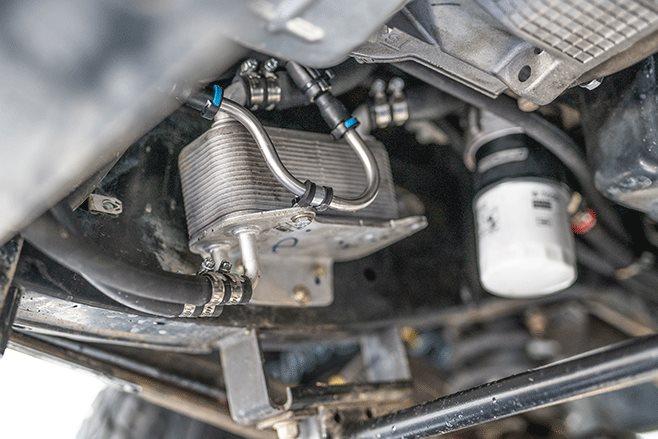 Ford’s 6R80 transmission is one of its most popular lines of automatic shifters used in everything from F150s to Mustangs, as well as the current generation Duratorq-powered Rangers. With a reasonably compact footprint as well as a low first-gear ratio of 4.17:1 and a long-legged 0.69:1 in top gear, it’s got an impressive take-off and helps lower fuel usage, making it a perfect match for converting into Duratorq-powered Land Rovers.

In stock form they’ve been known to handle up to 1000hp, and with the OEM tiptronic shifter make a useful tool off-road, allowing you to dial in the right gear for the task at hand.

DAVIS Performance Landys offers the conversion as a full drive-in drive-out package in its workshop using a variety of imported and locally sourced gear. The bulk of the conversion is a kit from UK supplier JE Engineering which specialises in hot-rodded Land Rovers.

The backbone of the conversion is Ford’s 6R80 transmission we talked about previously. The Ranger-specific version is sourced brand-new direct from Ford and bolts directly to the Defender 2.2L or 2.4L motors without adaptors. 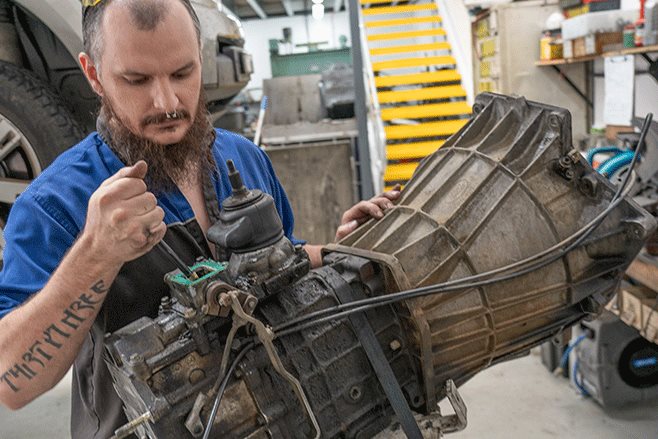 Moving rearwards an adaptor is required to mate the automatic transmission to the Defender’s original transfer case, the mighty LT230. Custom driveshafts front and rear account for the relocated transfer case position but use original Land Rover-style yokes and joints.

There’s a variety of simple yet extensive adaptors used, as well as an ECU tune to get the transmission and engine talking to each other smoothly, but being of the same family, once they’re talking, it’s an OEM level of usability rather than a cobbled-together conversion.

Finally, inside a Ranger the shifter is encased in a milled housing in the new centre console. It won’t exactly pass for factory, but only because the fit and finish is far superior to the original Defender interior, including a tidy pair of cupholders thrown in for good measure. If you were looking to give your Defender a similar conversion you can expect a bill around the $25,000 mark.

WHILE YOU’RE IN THERE…

MAKE no mistake, the 6R80 transmission and DPL conversion are more than up to the task of just about any job you could throw their way, but, hey, sometimes more is more, right?

Right away, while Davis Performance Landys is working its magic, it also installs an additional oil-cooler up front to keep the transmission’s temperature in check, and also holds a little more oil so the ’box should take longer to heat up in hard work. 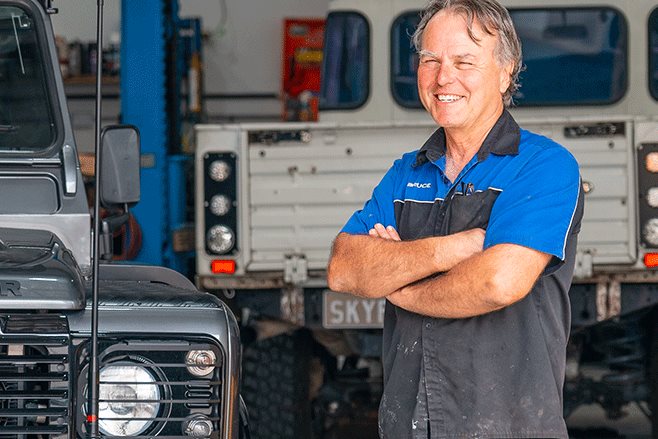 The model we drove also had fitted an optional electronic handbrake; the clever unit replaces the bulky lever next to the driver’s leg, freeing up more interior space, and it’s tied into the automatic transmission so it’ll automatically disengage if you go to drive off.

For those looking to push performance further, the use of the 6R80 transmission means there’s a whole host of aftermarket mods such as heavy-duty valve bodies, torque converters, deeper sumps to hold more fluid, and temperature monitors. As the ’boxes supplied are brand-new none of it is required, but it does give a little peace of mind you’re not stuck with an obscure transmission you can’t source parts for down the track.

HOW DO THEY DRIVE?

JUMPING behind the tiller of the converted Landies and the first thing that’s clear is how much more spacious the typically cramped interior is. Land Rover’s Defender is iconic for a few different reasons, but driver comfort isn’t one of them. By losing the clutch pedal, the typically cramped pedal box significantly opens up, making the cabin feel more spacious and far more comfortable for long-haul drives, as well as around-town trips.

Clicking the suspiciously Ranger-looking auto-shifter into drive and releasing the brake, the Defender takes off exactly how you’d expect a factory automatic version to do, smoothly rowing its way up through the gears.

We had the chance to drive both 2.2L and 2.4L turbo-diesel versions and both had plenty of get up and go, with the auto competently keeping up and never lingering in gears too long or awkwardly down-shifting like some conversions are prone to do. It’s not exactly Ferrari-smooth, but it’s a drastic improvement in a Defender. 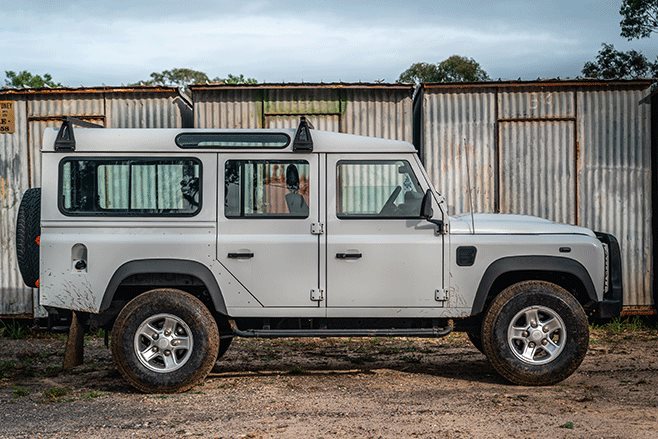 Off-road and the benefits of the auto became far more apparent.

The course we took the Defender through had a healthy mix of mud, loose shale, steep climbs and urban traffic. In steep, undulating terrain the torque converter would allow us to lean into the accelerator harder than you typically could with the direct drive of a manual transmission.

It’d soak up and smooth out quick jabs on the throttle from the bumpy track, and allow the power to progressively build right from idle rather than having to manage the stall point of the old manual gearbox.

Spinning around at the top and heading back down the same climb we’d simply tap the shifter over in to first gear and the torque converter would lock up, allowing us to use engine braking just as effectively as a manual gearbox.

SPECCY: Options to tick for the 2020 Defender

Like most automatic 4x4s compared to their manual counterparts, by not worrying about the constant balancing act between the clutch and the accelerator made it a far more a point-and-shoot kind of affair. Somehow, the agricultural nature of the Defender still shone through, so you don’t lose a great deal of the charm you get from having an older rig.

If you’re after the rugged simplicity of camping under a tarp and rowing gears yourself, the conversion may not be for you. But if you’re more focused on the places you can go than what your feet are doing on the drive, an auto conversion will make your 4x4 more capable, and you more comfortable.

The West Coast of Africa provided a stunning background for the all-new Defender launch. Here’s a selection of photos from the wild trip. 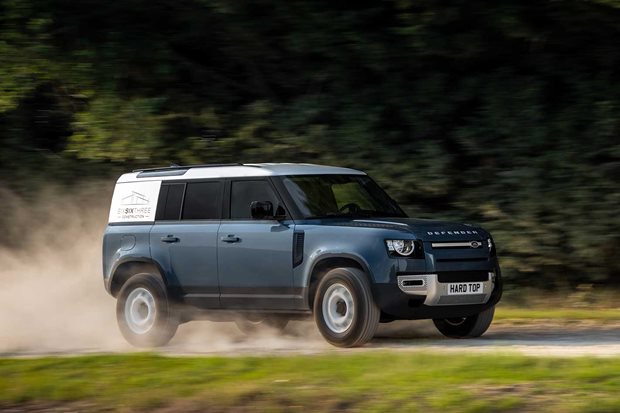 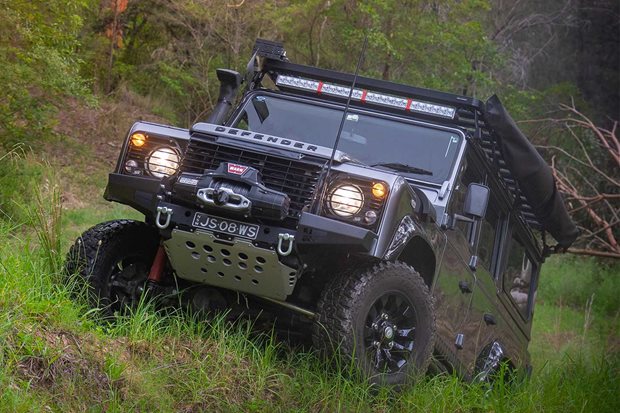