FOLLOWING a year of speculation and spy shots, the wraps have just been pulled off Ford’s Ranger Raptor in Thailand overnight.

Aside from the bold, wide-body styling of the bespoke Raptor, the big reveal was the powertrain, with a 156kW/ 500Nm, 2.0-litre, bi-turbo diesel four-cylinder engine filling the engine bay, backed by a 10-speed automatic transmission adapted from the F-150 Raptor. So no petrol engines for Australia, or a version of the 3.2L diesel that is a favourite with Ranger buyers here.

The 2.0L engine makes more power and torque than the five-cylinder 3.2L and, according to our guys who have ridden in the new Raptor, the bi-turbo is more than enough to add excitement to the ute.

Like the F-150 variant that has made the Raptor nameplate legendary, the Ranger Raptor is more than just an engine; the desert racing-inspired chassis and suspension really dial up the adrenaline levels, and the Ranger Raptor was tested and tuned on some of Australia’s toughest outback off-road tracks. The ladder frame has been strengthened and adapted to take a coil-sprung rear end instead of the tradie-spec leaf springs. This set-up is similar to that found under the back of the Everest wagon as it uses a Watts link arrangement but differs with its coil-over Fox shocks that are mounted further outboard for improved stability. The rear wheel track is also wider than that of a standard Ranger, to match the 1710mm-wide track front end.

The BFGoodrich KO2 All Terrain tyres measure 285/70-17 and were specifically developed with the Raptor in mind. The braking system is upgraded with twin-piston calipers on whopping 332 x 32mm ventilated rotors at the front, as well as 332 x 24mm ventilated rear discs clamped by new 54mm calipers. The Raptor retains a part-time 4x4 system with low range but now includes a Terrain Management System (TMS) similar to what we see in Everest and F-150, but with the ‘Baja Mode’ that was previously exclusive to F-150 Raptor. Baja mode desensitises the chassis electronics, including the traction and stability controls, giving more control back to the driver while at the same time holding gears in the 10-speed auto and sharpening the transmission and throttle response for high-performance driving.

This is the mode to unleash your inner Robby Gordon aspirations; while the regular On-Road and Sport modes are there for tarmac travel, and Grass/Gravel/Snow, Mud/Sand and Rock modes are there for off-road terrain. The Ranger Raptor has a rear differential lock as standard. 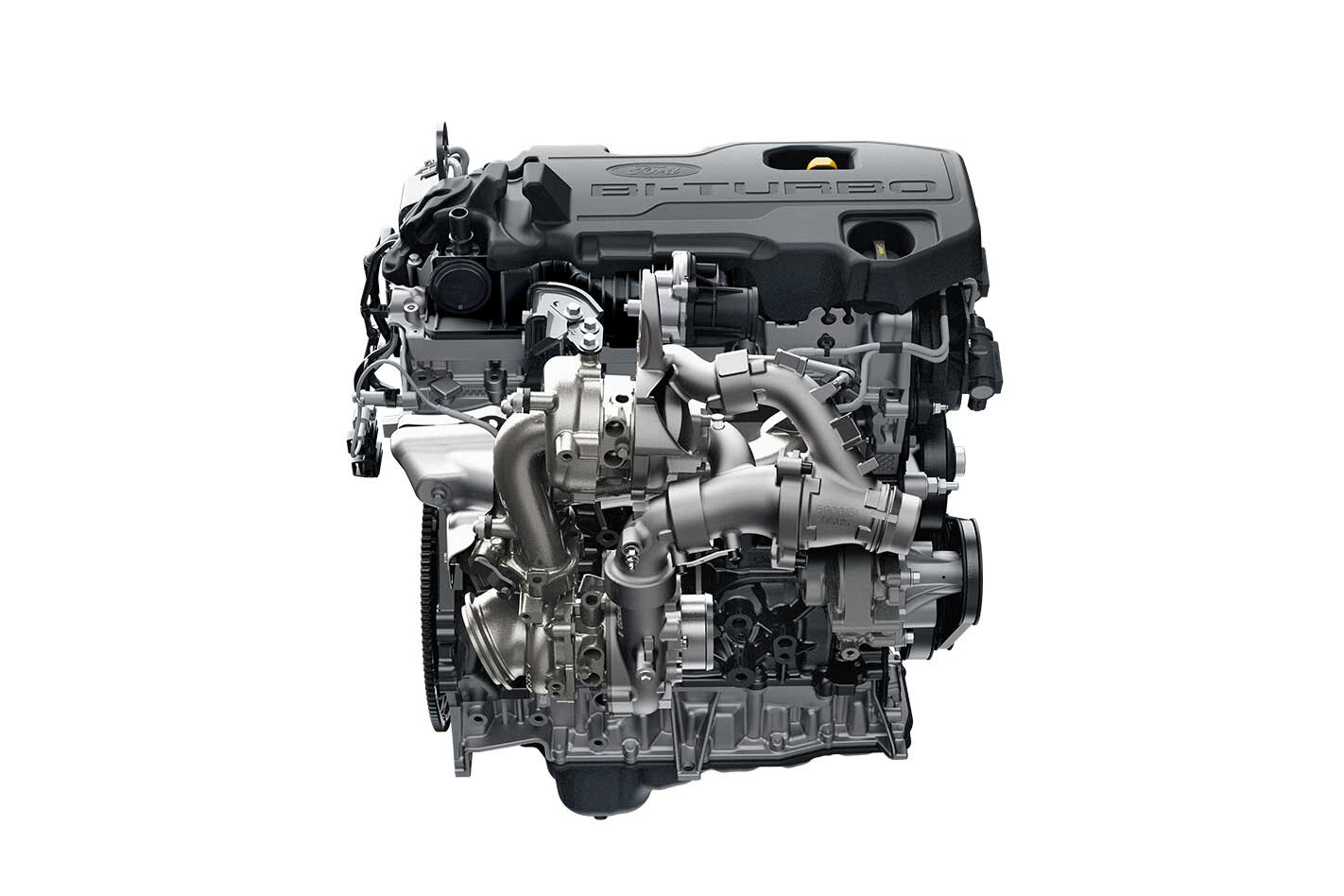 Ranger Raptor’s styling obviously comes from its bigger American cousin, the F-150, with the signature black grille with bold FORD lettering. The front ’guards are made from a composite material and are pumped out to cover the wider wheel track and accommodate the tyres with more suspension compression.

The rear cargo tub also gets the pronounced ‘guards for tyre clearance, while a new rear bumper features an integrated tow bar to dramatically improve the departure angle which is now 24 degrees. Approach angle is 32.5 degrees, rampover is 24 degrees and ground clearance is listed at 283mm. Towing capacity of the Raptor is rated lower than the regular Ranger, at 2500kg, due to its drivetrain and suspension package that is set up more for performance than load-hauling.

Inside the Raptor gets trim unique to the Ranger line-up. The front seats feature heavy bolsters to better hold the occupants in place during high-speed off-roading, while the full suite of features and equipment are included. Of interest are the magnesium gear-shift paddles behind the Raptor-unique steering wheel, and the use of keyless entry and push-button starting; features we hope extend to the updated Ranger and Everest models later this year. 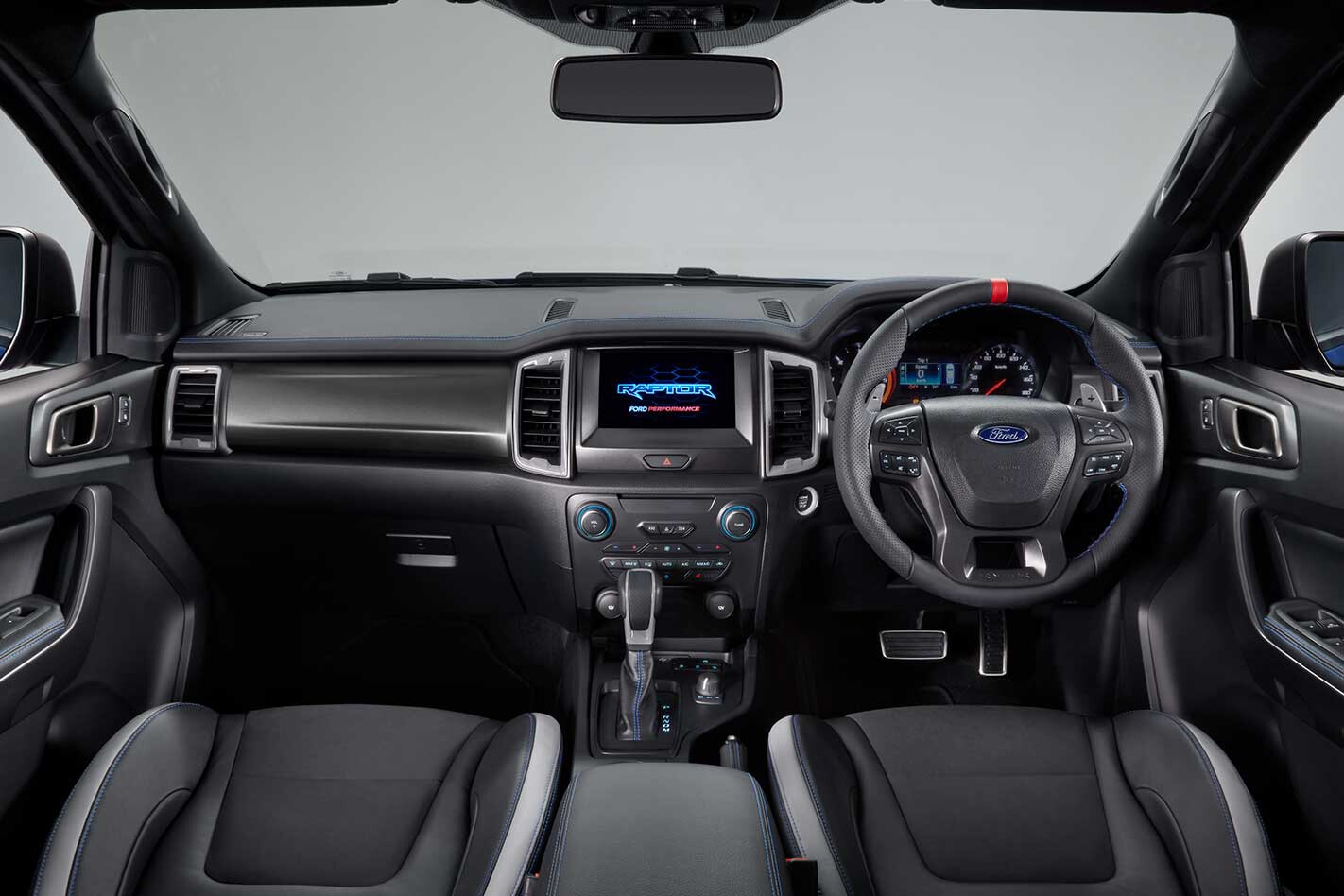 The Raptor will sit at the top of the 2019 Ranger line-up when it arrives in Australia in the third quarter of this year; although, there has been no word on price as yet. Ford tells us this will come closer to the launch date. With the level of bespoke suspension upgrades, modified and reinforced chassis, unique engine and transmission, and the bold exterior design, we’re tipping the Raptor won’t come cheap, nor will it be for everyone.

The Ranger Wildtrak already kicks the tin for more than $60K, and we reckon the Raptor will be closer to $90K. That will be a lot of money for any ute, but the Ranger Raptor won’t be just any ute. “It is amazing to enable this level of performance and create a vehicle that can provide off-road enthusiasts such an adrenaline rush,” said Jamal Hameedi, Chief Engineer, Ford Performance, Ford Motor Company. “It really is like a motocross bike, snowmobile and an ATV rolled up into a pickup truck – it’s an incredible, awesome experience!”