A closer look at the 2020 Land Rover Defender

Will this all-new Land Rover have the off-road performance to live up to its legendary nameplate? Let’s take a close look.

IT’S BEEN a long-time coming, but the all-new 2020 Land Rover Defender has finally been revealed; although, the Defender 110 five-door wagon isn’t expected to arrive in Australian dealerships until June 2020, and the Defender 90 three-door wagon around six months after that.

Land Rover Australia says Defender 110 pricing will start at $69,990, while it has yet to announce pricing for the 90. The initial 110 range will comprise Defender, First Edition and top-of-the-range Defender X model grades, as well as S, SE and HSE specification packs. 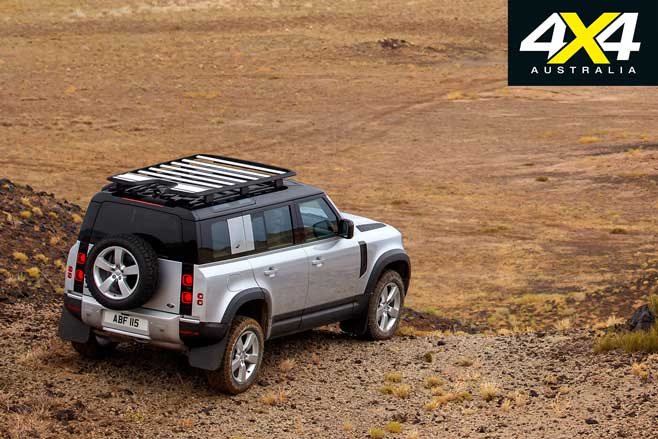 In addition, Land Rover will offer four accessory packs called Explorer, Adventure, Country and Urban, each consisting unique optional accessories. Furthermore, there will be a huge range of individual accessories from an electric winch to a full-length roof rack, and an inflatable awning to a rooftop tent.

There will also be commercial variants of the new Defender 90 and 110, but these are yet to be confirmed for Australia, with James Scrimshaw, Land Rover Australia’s PR manager, telling us, “We are interested in bringing the commercial variants to Australia and will be ordering evaluation units once they are made available to us.”

The new Defender really is all-new, built on a D7x (x for Extreme) platform with an aluminium monocoque structure supporting steel panels – rather than its predecessor’s steel chassis with aluminium panels – and fully independent suspension (with air springs on 90 and 110, and coils also available on 90) replacing the old Defender’s front and rear live-axle coil-spring setup. And, as expected, the new Defender is packed full of high-tech equipment … unlike its rather rudimentary ancestor. 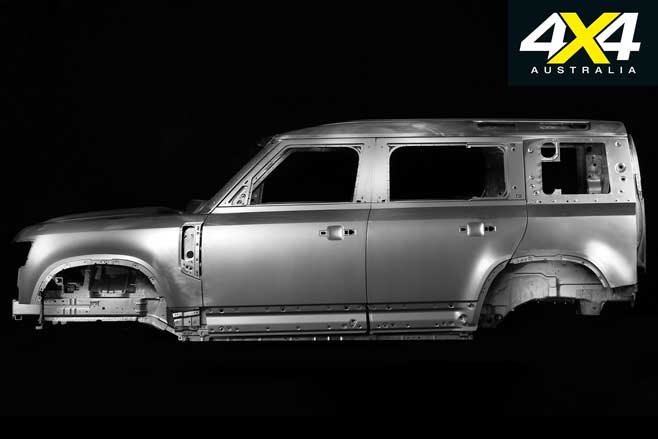 At launch the new Defender will be available with a choice of two diesel engines or a petrol engine, all mated to an eight-speed auto. The base SD4 2.0-litre turbo-diesel will make a claimed 147kW at 4000rpm/430Nm at 1400rpm, the higher grade SD4 will have the same torque peak but will make a claimed 177kW at 4000rpm, while the I6 Mild Hybrid Electric Vehicle (MHEV) 3.0-litre petrol straight-six will pump out a handy 294kW at 5500rpm/550Nm from 2000 to 5000rpm. The last of the old Defenders could only muster a paltry 90kW and 360Nm!

There’s no doubt the new Defender will offer far superior on-road performance and dynamics than its predecessor, combining full-time 4x4 with fully independent air suspension and electrically assisted power steering, but Land Rover is also confident off-road performance will also impress, saying the new Defender “has been engineered to be the most capable Land Rover ever built”. 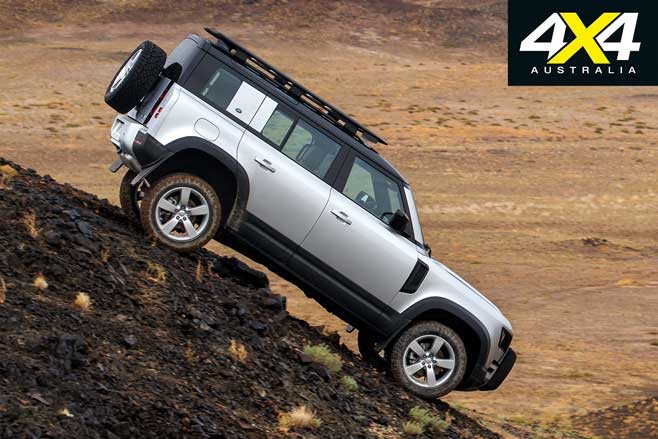 Land Rover says the Defender’s D7x monocoque structure is three times stiffer than a typical separate body-on-chassis design. The air-suspended Defender 110 offers a handy 291mm of ground clearance on its highest off-road setting with 38° approach, 40° departure and 28° ramp-over angles, as well as a 900mm wading depth.

The air-sprung Defender 90 has the same ground clearance and approach and departure angles, but a slightly better 31° ramp-over angle in its highest setting, while angles for the coil-spring 90 are 31°, 37.9° and 25° respectively, with 226mm ground clearance and 850mm wading. 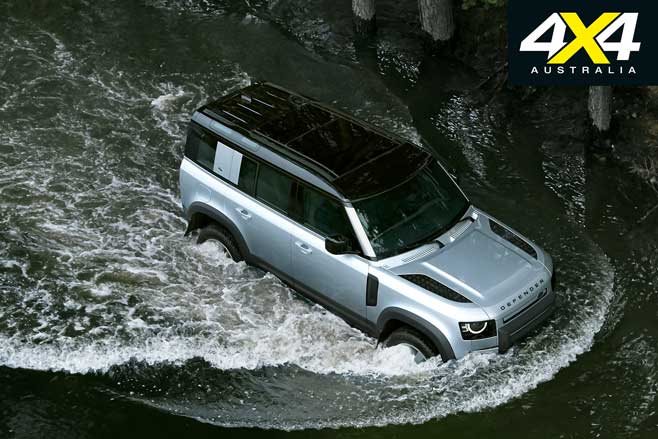 Both diesel variants have an overall low-range reduction in first gear of 51.52:1, while the petrol model betters this with 57.2:1. Land Rover claims a maximum 45° gradient climb/descent capability as well as a maximum 45° side slope traversing.

Depending on specification (and options selected), the new Defender is available with wheels ranging in diameter from 18 to 22 inches. Those keen on adventure travel will be pleased the steel 18s are fitted with 255/70R18 tyres, providing a good range of aftermarket Light Truck (LT) tyre options.

Goodwood 2019: Defender gets a dynamic debut 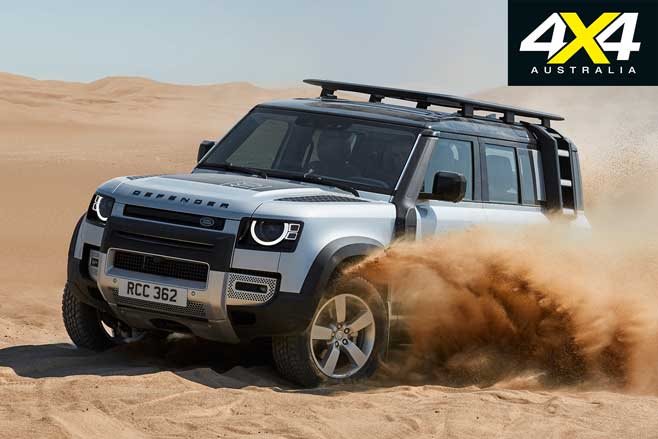 Defender’s Terrain Response 2 also allows the driver to self-configure the setting for certain terrain types, or simply leave it in Auto and let it make up its own mind; while a new 3D Surround Camera provides a 360-degree plan and 3D exterior views of the surrounding area on the vehicle’s 10-inch touchscreen, both off- and on-road. 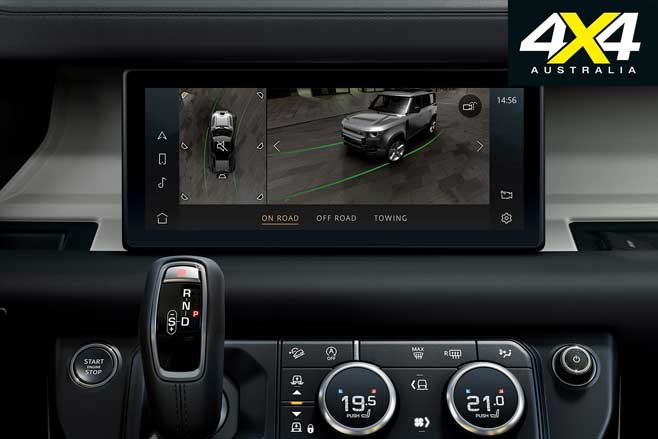 The Defender offers a 3500kg maximum braked towing capability and features Advanced Tow Assist that allows drivers to “steer trailers with their fingertips using a rotary controller on the central console”, according to Land Rover. This system works in conjunction with the aforementioned 3D visualisation on the touchscreen.

On the inside, the Defender can be optioned with a traditional two-seat layout in the front row or an innovative ‘jump seat’, meaning the 90 can be specified to seat up to six occupants, and the 110 can be had in five-, six- or seven-seat configurations. Load carrying is impressive, too: the Defender 110 has a maximum payload of up to 900kg depending on specification. And the roof can handle a static load of up to 300kg or 168kg when driving.

With the optional Urban Pack the Defender gets 22-inch gloss black rims, a spare wheel cover and a few other ‘bling’ bits; the Explorer Pack includes an expedition roof rack, raised air intake and side-mounted gear carrier; the Adventure pack has the gear carrier, an integrated air compressor and a portable rinse system; and the Country Pack has the rinse system and a full-height cargo barrier. There’s also a range of individual accessories. 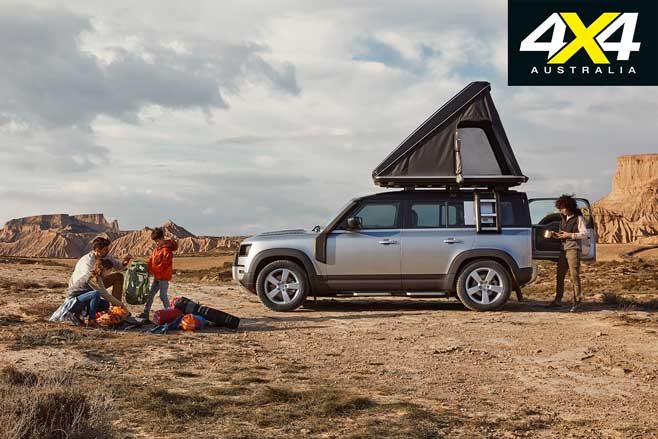 There’s no doubt the new Defender will offer an astounding combination of on- and off-road performance its predecessor simply could not match, but one thing this all-new high-tech off-roader lacks is the simplicity of its forebears; it has 85 individual ECUs that “turn the new Defender into an all-terrain super-computer”. Features include a colour head-up display, remote smartphone tracking, a wearable remote key fob and remote 5G software updating.

While these features will no doubt be a boon for urban buyers, those seeking a remote-area overlander might approach the new Defender with some trepidation. Only time will tell if the new Defender is worthy of wearing the Defender nameplate. 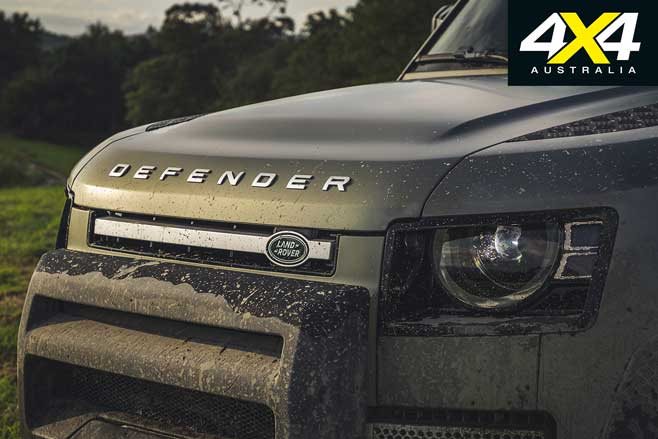