Australian invasion at 2019 King of the Hammers

Two Aussie teams try their luck at one of the world’s most grueling off-road events.

THE King of the Hammers, known as KOH, is one of the most iconic 4x4 off-road racing events in the world, and it’s run in the heart of a lake bed in the Johnson Valley, California, USA.

This remote, dry and dusty location turns into a fully operational makeshift town for this event every year and attracts more than 100,000 people. And this year, a couple of teams from Australia decided to compete: Barry and Jim from Road Runner Offroad, and Chris Hummer and Neil Cooper from Dynamic Wheel Co. 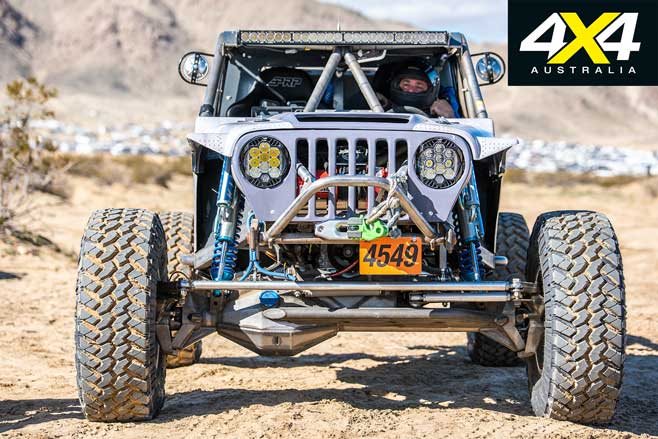 Barry and Jim have competed in basically every winch challenge event in Australia, and they’ve taken out most of the competitions. They’re very well-known and are always known as the team to beat. Chris and Neil (Coops and Hummer, as they are affectionately known) are also very well-known throughout the Australian off-road community. After winning the iconic Outback Challenge three times, they decided to visit KOH in 2018 to have a crack at the biggest Ultra4 race in the world.

Back in Australia, Neil purchased a USA-built Ultra4 and started preparations to get it ready for KOH 2019. It has an LS 6.0-litre engine running through an automatic transmission, an Atlas four-speed transfer case, Spidertrax axle housings and Gearworks 10-inch diffs.

The first job was to fit new ARB racing lockers front and rear and remove the solid spool centres. This proved to be a larger task than first thought, as the original Gearworks diff housings needed upgrading to fit the lockers. Plus, an upgrade to new 40 Spline axles was required. All the wheel bearings needed replacing, and Spidertrax no longer supported the older-style bearing housings so the new Spidertrax Ultimate unit bearings were ordered directly from the USA. The preparation proved to be a much larger job than first expected and meant the buggy was finished one day before it was loaded into a container destined for Los Angeles. 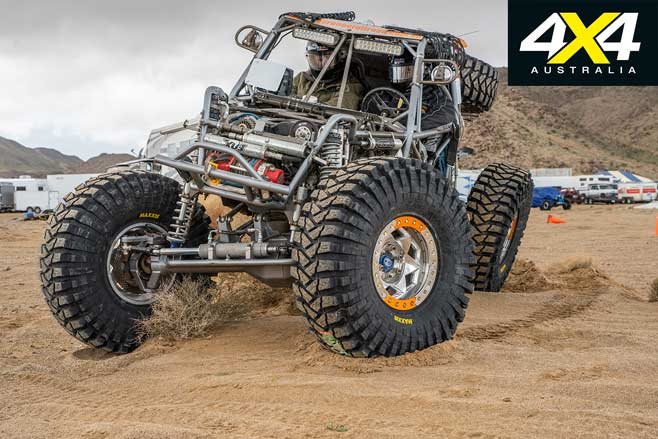 Thanks to some industry contacts in the USA, Barry quickly found a 4400 Class Ultra4 that was last raced in 2014. The car needed some work to bring it up to spec, and a deal was struck and the boys had a car about three months out. This meant a heap of work for the owner in the States and a steep learning curve for Barry and Jim.

Like any good long-distance relationship there were plenty of pictures, measurements and videos heading back and forth across the Pacific to try and get a turn-key car on the lake bed come KOH time.

Back in Australia, Barry saw the opportunity to share the marketing exposure with some of their current suppliers. Maxxis Tyres jumped on board with some sticky competition compound 42-inch M8060 tyres to be put on the car for race day. Having driven on the Maxxis tyres before, Barry was confident in their performance, with the only learning curve being the extra clearance over the 37s he usually ran back home.

Neil and Chris headed to LA late in January to find the ship with the Ultra4 on board was running late, and it only made it to the Port of Long Beach just two days before the opening of Hammer Town. 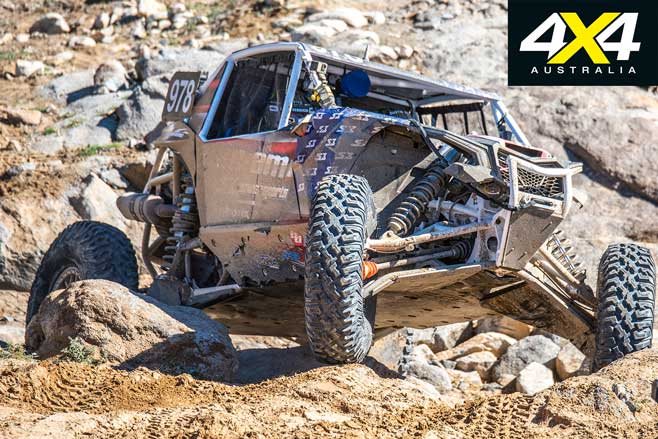 Meanwhile, Barry and Jim, along with a small support crew from Australia, pulled onto the lake bed to join 100,000 other people for the weeklong off-road motor sport festival. There was one small issue, though: the car hadn’t arrived.

Unlike most Australian off-road events, teams can pre-run the KOH course before the event; so most teams do a few runs to perfect their lines up some of the harder obstacles like Back Door, Chocolate Thunder, Wrecking Ball and Boulderdash. This also gives teams a great opportunity to work out fuel usage and practice in the pits.

Unfortunately for Barry and Jimmy, they had no time to do any of this. When the Ultra4 finally arrived, it was complete and working but required some fine-tuning. Maxxis USA fitted the 42-inch Trepadors to the Trail Gear Creeper Lock rims in the specialist tyre-fitting facility onsite. 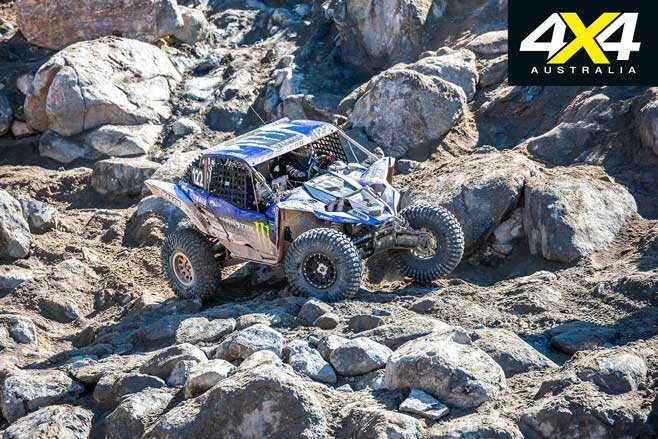 Hammertown in the heart of the Johnson Valley turns from a dust bowl to a fully functioning town for this event, and every manufacturer involved in racing is there. You can change tyres, fabricate brackets, tune shocks, replace coils, use mobile hoists, and more.

Neil and Chris’ Ultra4 was completely untested, with the vehicle transported to Johnson Valley by 4 Wheel Parts, USA. Before Neil and Chris got a chance to pre-run the course, the first day showed some new problems with a faulty steering ram, a leaking shock absorber and many small electrical gremlins.

By the time the prologue was run their Ultra4 was ready to go, and Neil and Chris qualified 79th out of 110 cars, with a tyre going down after hitting a protruding rock during the short prologue course.
All-new Mickey Thompson Baja Boss 40-inch tyres were specially built for KOH for the GenRight race team and the ARB/Mickey Thompson team of Neil and Chris. These project tyres, fitted to the new Pro Comp Trilogy Race alloy beadlock wheels, were made with a very special soft compound to give more traction on the Johnson Valley rocks. 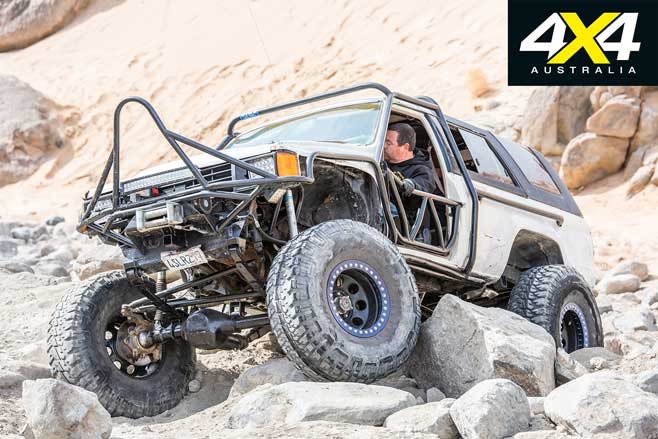 With new tyres, no seat time and a car that wasn’t yet set up, Barry and Jim put on the safety gear and headed out for their qualifying lap. Despite a clean run the boys finished towards the rear of the field, leaving them with a heap of work to do to move up the field on race day. The saving grace was the tyres, which performed beautifully in the sand and rocks of the fairly short qualifying course.

A lot of work was required to set the suspension up – Triple Bypass Shocks combined with coil-overs required a lot of testing to tune them correctly for the terrain they were racing on. Over the next few days, Barry and Jim (with crew Scott McGill and Brad Sherry) spent countless hours and late nights removing shock absorbers, re-valving, changing swaybar set-ups and fine-tuning the suspension, with the hospitality and experience of the American parts suppliers, workshops and teams helping them out along the way.

This was a very steep learning curve for the boys, as the buggy didn’t handle the qualifying lap well and it was a race to get it right for the big dance. After seeing a couple of shock tuners, the guys from ADS Racing Shocks came through with the goods and had Barry and Jim’s buggy singing over the bumps and ready for the main event. 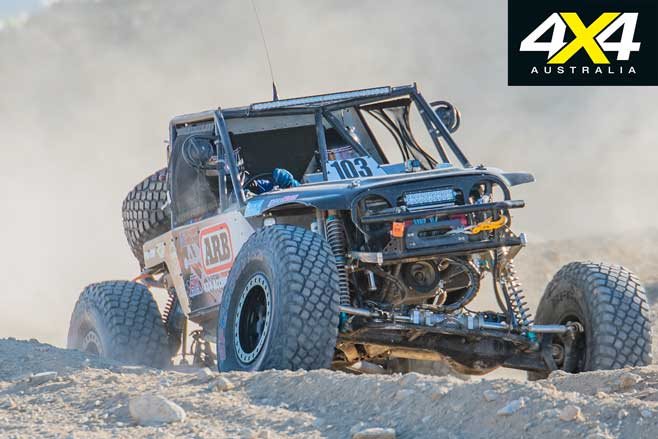 Chris and Neil both had family along as support crew, while the team from 4 Wheel Parts assisting in the main pits and an Aussie crew (supporting fellow competitor Mitchell Thorp from Queensland) supporting in the remote pits. The Crew Chief was Josh Redfern, a full-time firefighter and qualified automotive technician who had also supported Chris during his racing in North Africa a few years earlier.

At 10am – with eager fans in Australia up at 3am to watch the live stream – both teams set off on the grueling 200-mile (322km) desert and rock race. Neil and Chris rapidly started to overtake a few buggies and pass many broken-down vehicles along the course. The goal for Neil and Chris was always to try and finish the event.

With vehicles ranging from home-built buggies to professional teams spending upwards of half a million dollars, it’s pretty normal for only 15-20 per cent of the field to finish the tough event – and this year was no different. Neil and Chris finished a credible 15th against some of the best off-road racers in the world. 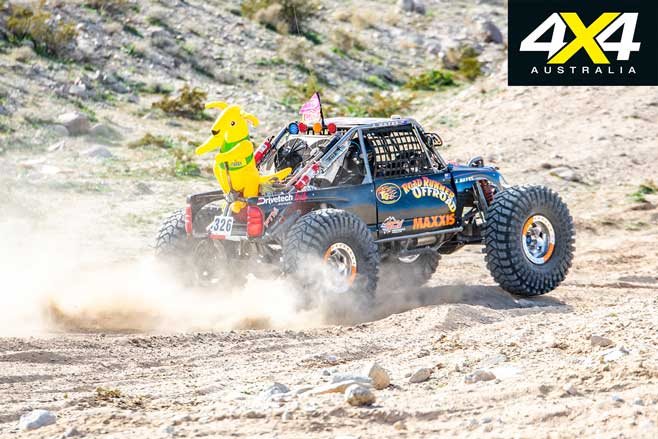 Elsewhere on the course the Road Runner Offroad boys were feeling confident with the car after the work that had been done and spending a bit more time in the seat. The first lap saw them make up places to get them mid-field. A quick pit-stop, check-over and refuel and the car was still in one piece, with the Maxxis tyres holding up perfectly against the rocks and high-speed desert sections.

On the second lap, Jim made the call to attempt the famous ‘Back Door’ trail (which must be completed on any one of the three laps), with the plan to nose the car up and assess the level of grip the sticky compound tyres provided against the vertical rock wall.

As the car climbed and gripped, the rear diff pinion failed, leaving Barry and Jim stranded at the bottom of ‘Back Door’ and their KOH journey over. At this stage, Barry and Jim, who started at the back of the field, had made up a lot of time, which was a huge accomplishment. 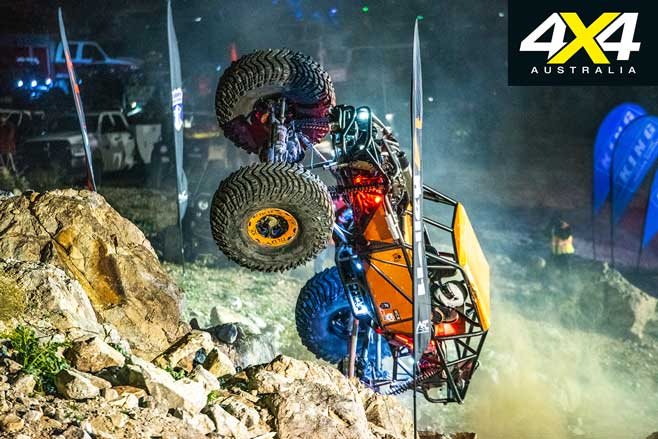 With a couple of deep breaths and a bit of the Aussie never-say-die attitude, a plan was hatched, with no assistance allowed under the rules they set out on foot to the pits to collect a new diff centre and the tools and oil required to do the swap in the field.

Still wearing full two-piece race suits, they made the journey there and back (roughly three kilometres back to the pits) carrying the 50-odd kilos of parts and tools. An unfamiliar set-up and trying conditions saw the whole job take a little over three hours to get it back together.

While working on the car, Barry and Jim helped out a few teams, running the winch cable for the single-seat buggies and saving valuable time for the other drivers – a fantastic display of comradery and Aussie spirit. 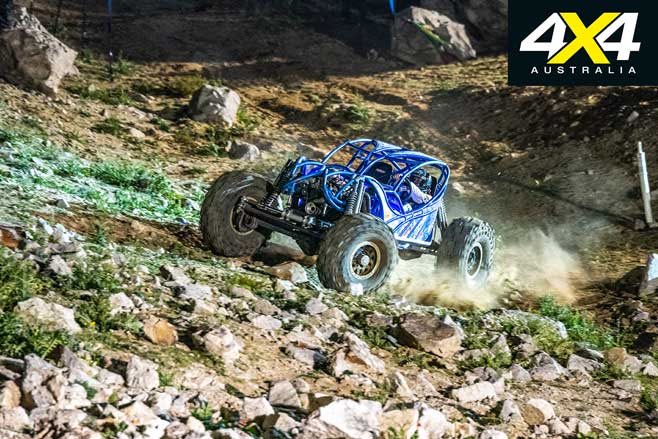 With the car back together and following a quick winch, the duo completed ‘Back Door’ and their goal changed to simply be one of the 30-odd cars (from more than 100) to finish the event. The sticky Treps helped the guys make good time through the longer, slower second lap, seeing them finishing lap two just before dusk.

With only a handful of teams still running and the top running teams finished – and celebrating – they started the third lap despite the dark and cold of the desert. With poor lighting and heavy broken traffic on the trails, the guys pulled the pin at the 85-mile mark and headed back to the pits. The buggy held up on the drive back to pits and the mood shifted to frustration, with the team focusing on how to conquer KOH 2020.

Without the sponsor’s help, this experience would not have been possible. Massive thanks to: Road Runner Off Road, Maxxis Tyres, Drivetech 4X4, SJG Event Photography, RCV Performance Products and Trial-Gear.