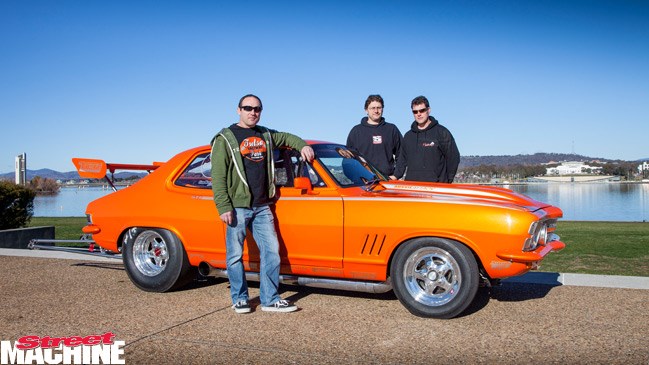 A mere 10 months ago, three Aussies were sitting in the back of a Winnebago at Drag Week 2012, sinking tins and hatching a scheme to return the following year and have a crack at the event in their own purpose-built race car.

IT might sound far-fetched, but the idea stuck and Canberra boys Paul Allen, Jake Edwards and John Whyte have just loaded their 1299rwhp Toyota 2JZ-powered LC Torana into a container and shipped it off to the US of A.

The gruelling event pits competitors against road, track and each other, with races on five consecutive days. They drive their race cars from one track to the next, towing all the help they’re allowed — a trailer full of parts, tools and consumables. Teams must be completely self-sufficient and are prohibited from accepting outside help for the full duration of the event.

The beautifully engineered Torana is the product of a whirlwind build, and while it has completed just one full pass — an 8.47@165mph at Heathcote with considerable traction issues — the lads are hopeful mid to low seven-second passes in the US. The team’s final attempt to run a number before the car shipped ended in disaster on Wednesday at Sydney Dragway.

“We ran a 1.26-second 60ft time, then the injectors stopped and it went bang,” said John Whyte. “The car had to be in the container within a day and we thought it was game over. Then we sat around the heater and thought we may as well give it a go. We got the engine out, stripped it, honed it and reassembled it with new rod and pistons. Then we put the engine back in the car and put the car in the trailer.

The head will have to come with us on the plane though!” The event runs from 8-13 September and West Aussie John Farone will be returning to Drag Week in his twin-turbo Charger, so there will be plenty for us to cheer for this year! You can keep up with the action via Facebook.