YOU CAN make a 4x4 go anywhere and gear it up to do just about anything in the bush, but the moment you need it to carry six or more of your mates, that is where you need something out of the ordinary.

Brisbane-based 4x4 conversion company, Bus 4x4, has been making a name for itself converting two-wheel drive buses and people carriers into properly equipped, roadworthy 4x4 vehicles over the past eight years.

Most of Bus 4x4’s creations are based on the Toyota HiAce, Commuter and Coaster people carriers, which were chosen for their popularity, ease of conversion, and spare part availability.

The converted vehicles are mostly bought and pressed into service in Australia’s mining and remote community sectors, where tarred roads are scarce and their converted 4x4 people carriers are the only way to shuttle people around.

The company’s latest creation, an AWD Conversion kit for the latest Toyota 300 HiAce Commuter, was recently put to the test on a two-week 10,800km tour of Eastern and Central Australia, going the long way around North Queensland, Northern Territory, South Australia and NSW, and visiting key customers in the region.

The AWD conversion was developed by Bus 4x4 in-house, using as many Toyota components as possible. The core components of the conversion features a high-range and low-range gearboxes, a 180mm body lift, modified independent front suspension, raised rear leaf springs, and a rear axle differential lock. 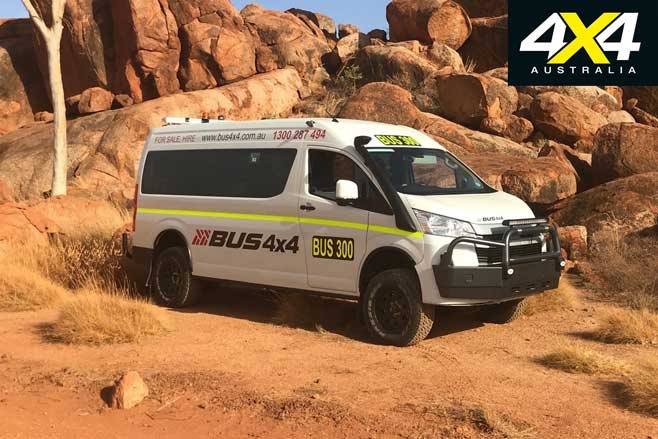 Bus 4x4 has a range of options to spec the HiAce for more rigorous journeys such as a shock absorber upgrade, protection rails, wheel arch mouldings, a lockable battery isolator with a jumpstart system, UHF/VHF radio, roof-mounted lights, and fire extinguishers.

According to the company, all of its HiAce conversions have a 1500kg braked-trailer tow rating, and retain the ANCAP five-star rating for the two- and five-seater models.

For the tour, the HiAce prototype was fitted with mine specification equipment such as a LK9-compliant roll over protection system, cargo barrier, bull bar, tow bar, custom-built snorkel, and further equipped with off-road tyres and under-body protection. 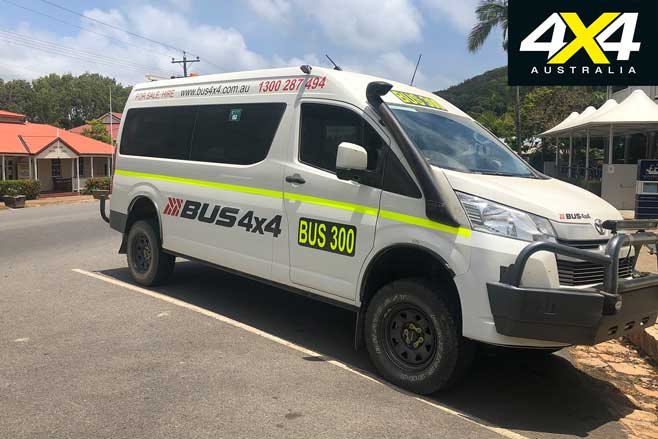 Driven by Steve Hargreaves, Bus 4x4’s national operations manager, the converted HiAce prototype left Brisbane and made its first scheduled stop at Blackwater, before tracking along the coast to Cooktown from Moranbah, cutting back down to Porcupine Gorge and stopping at Mt Isa.

Following a presentation to representatives from the mining companies in Mt Isa, the HiAce headed to Darwin along the Barkly Highway, before heading north on the Stuart Highway and stopping at the historic Daly Waters Pub.

From Daly Waters, Hargreaves drove to Darwin to showcase the HiAce prototype to the St John Ambulance organisation, the newest Bus 4x4 distributor for the Northern Territory. Hargreaves then pointed the HiAce south towards Alice Springs and Coober Pedy, before showcasing the prototype once again at more mining companies in the Hunter Valley. With the tour of duty done, Hargreaves then made a bee-line back to Brisbane. 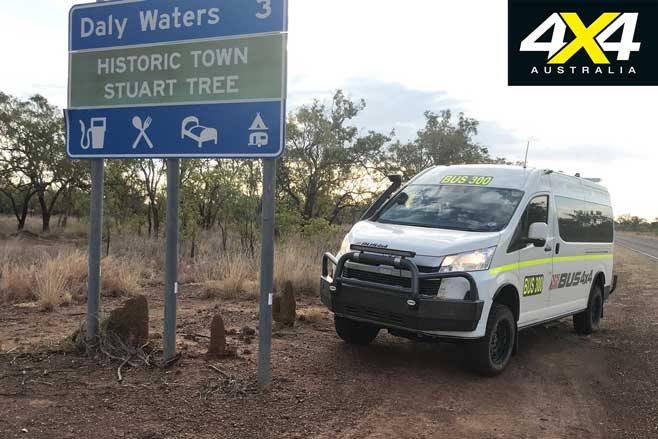 According to Bus 4x4, the AWD Conversion kit covers the entire HiAce range from the two-seat LWB van right up to the 12-seat SLWB Commuter. In addition to that, Bus 4x4 has also developed a kit for the luxury-spec Granvia.

Prices for the HiAce conversion kits start at $39,500 plus GST. Conversions are carried out by Bus 4x4 or any one of its distributors in NT and WA, however customers in other states would have to contact Bus 4x4 directly. For more information on Bus 4x4 and its range of products visit www.bus4x4.com.au.