We chat to 21-year-old Corey Lepe, recipient of this year’s Laurie Starling Scholarship award, as well as Laurie’s dad Rob and brother Jamie about the late fabricator’s continuing legacy

LAURIE Starling was an exceptionally talented fabricator and car crafter, and an outstanding bloke. Established by Laurie’s family following his tragic passing in 2014, the Laurie Starling Scholarship for Innovation and Excellence in Vehicle Fabrication seeks to encourage and reward young apprentices striving to achieve greatness in the field. 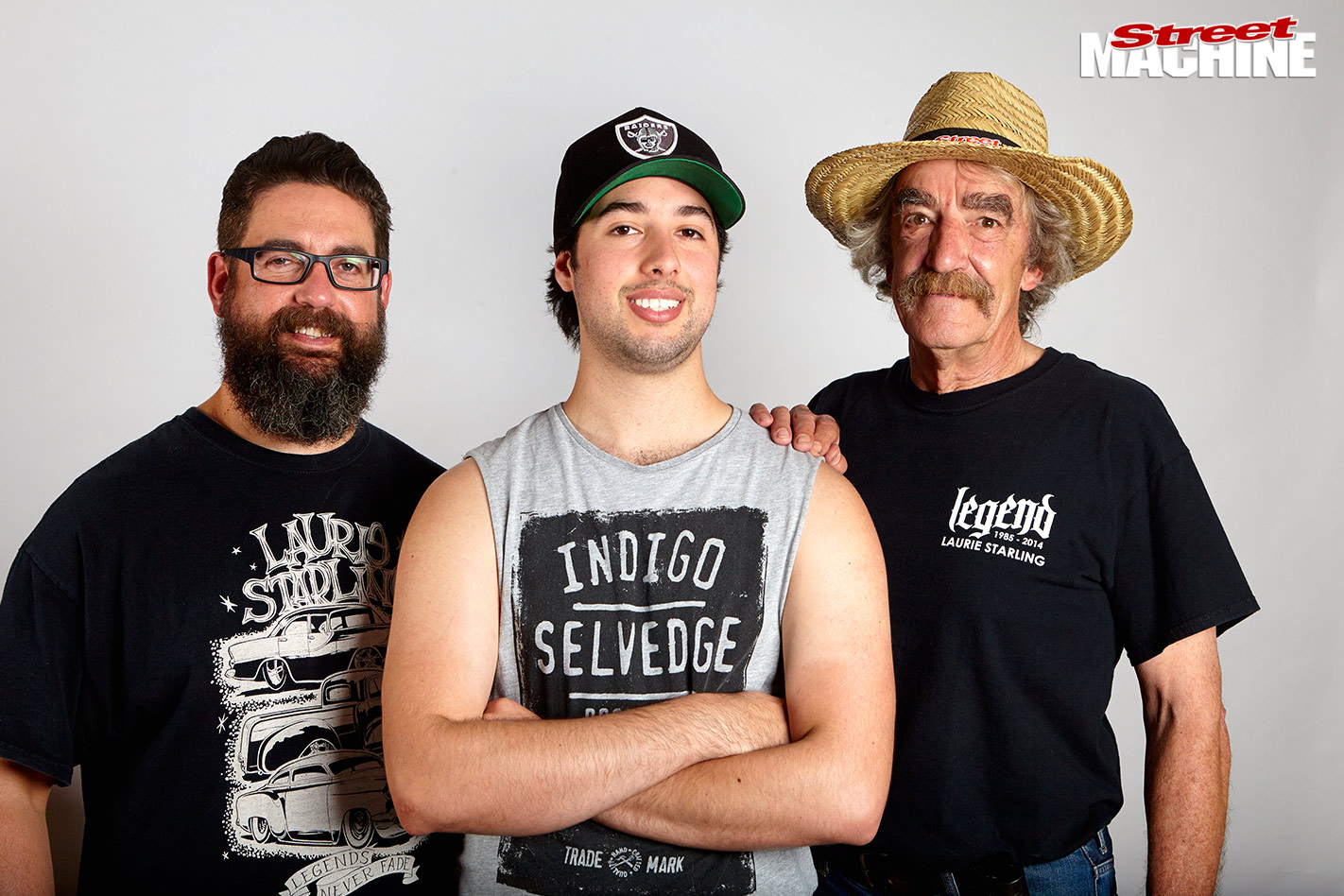 At Summernats 31, we sat down with the most recent recipient, Corey Lepe, as well as Laurie’s dad Rob and brother Jamie, for a chat about the significance of the scholarship and the importance of Laurie’s legacy.

What is the scholarship designed to do?
Rob Starling: It obviously has a sad origin in Laurie’s death in July of 2014. At that time we were thinking what would be a suitable legacy that we could put his name to, which would carry forward his values and inspiration and aspiration in many ways.

We spoke to Owen Webb, who through MotorActive had decided that MotorEx would sponsor the Laurie Starling Engineering Excellence Award for those who were at the peak of their careers. What we thought was that with Laurie’s interest in learning from judges, peers and others, the hardest part with all this was getting started. We thought that if we focus on an apprentice, it would be a good thing to find some youngsters who would embody his enthusiasm, willingness to learn, willingness to share, and his fastidious nature. A lot of things will work, but they don’t necessarily look good, and Laurie had a unique eye for what not only works and is innovative, but also looks stunning.

They are high ideals, and Laurie placed honour and truthfulness very highly in his own values. In a way that was partly the cause of his downfall. 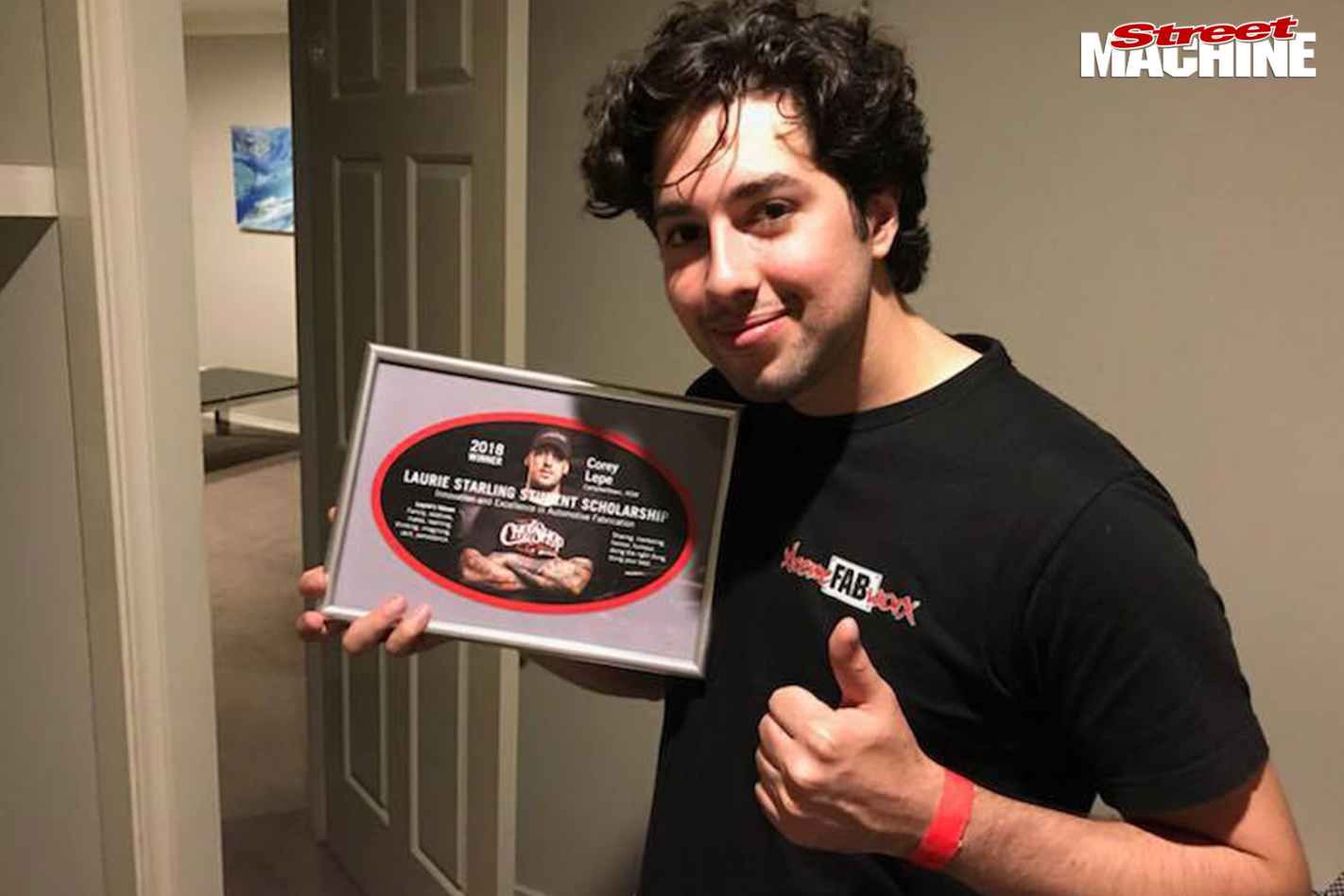 Corey is currently a third-year apprentice at Xtreme Fabworx in Smeaton Grange, NSW, but aims to one day run his own fabrication shop

What do you look for when evaluating candidates for the scholarship?
RS: The first cut is an obvious enthusiasm, which comes through their writing. The English isn’t always great, but the sentiment comes through.

Also, the time that they’ve been involved with [the industry]. One of the questions we ask is: Where would you like to be in five years’ time? We’re looking for people who have an aspiration to push on and stay dedicated and within the sector. If they say that they’re just looking to be in a steady job, then, no. If they say that they want to have done this or had a vehicle accepted in that, or that they’re looking towards starting their own shop, then, tick!

We usually get it down to a couple, then Owen Webb phones their references and the businesses for whom they’re doing their apprenticeship and gets an idea of their working habits, skills, and potential. Then I call their TAFE teachers and see how they’re getting on in terms of working with other students; whether they’re collaborative, enthusiastic and encourage others, and if they share their knowledge. It is on that basis that we decide.

A couple of years ago we couldn’t separate Mick McCallum and David Scenna, so we rattled the piggybank and said that we had to go with both of them.

We want these kids to be winners, not short-term, but long-term. We want to see elegant metalwork retain its place in the industry and not be subsumed by third-party parts. 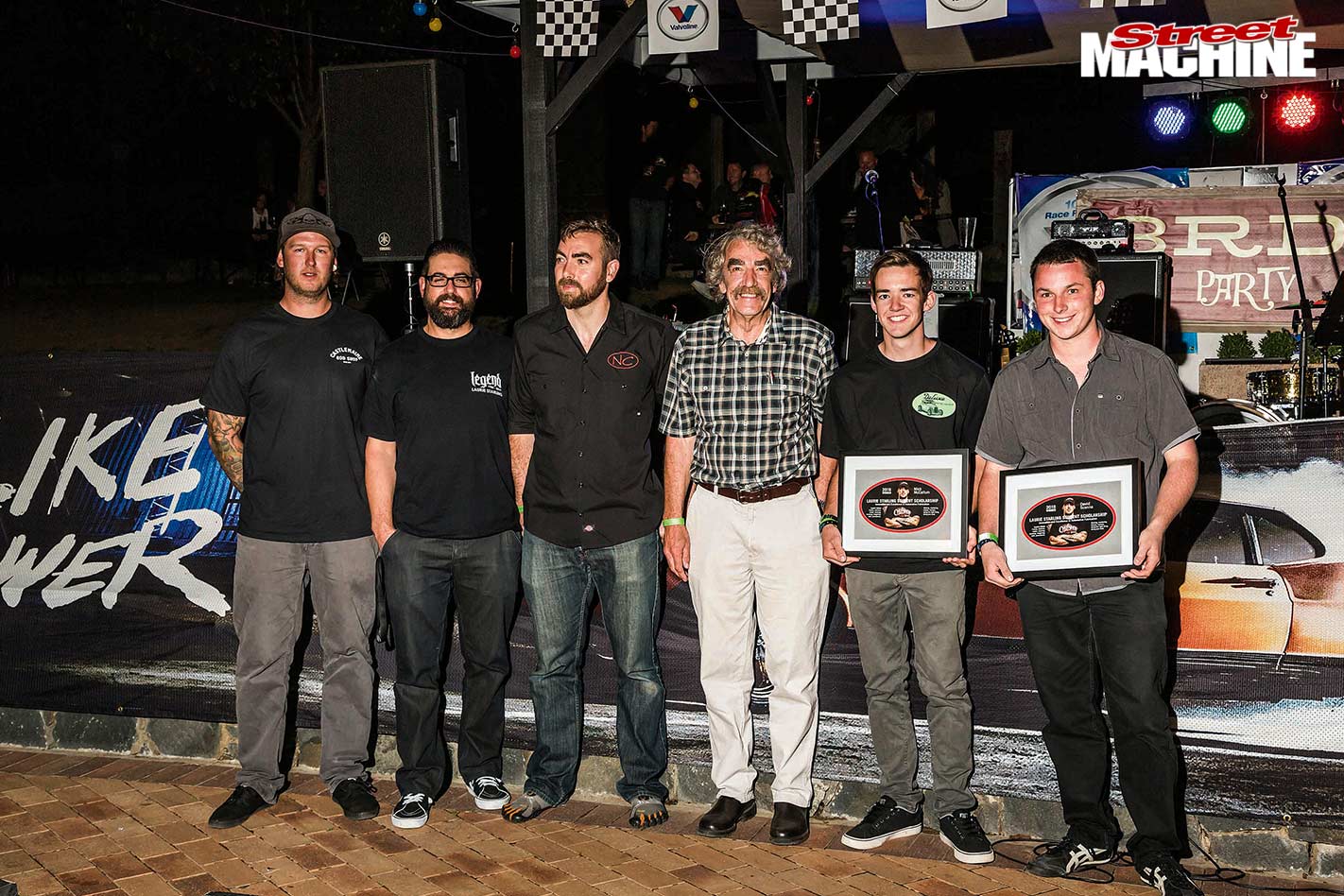 Mick McCallum and David Scenna were joint winners in 2016

Corey, having been through that process, how was it when you received the call that you’d won the scholarship?
Corey Lepe: I was on top of the world. When Rob rung me I was like: “Thank you, thank you, thank you!” I was so appreciative of the opportunity that he’d given me, and I’m honoured still.

I’ve always had a background in cars and bikes, but at school I didn’t really know what I wanted to do. My dad said that I should do what I love doing, because that’s what I’ll be good at. I originally started at a shop with one of the old winners [of the scholarship], and he’s the one who got me on to this. We always worked well together along with another tradesman, but we all went our own ways, and I’ve come to the shop I’m at now [Xtreme Fabworx]. Seeing the quality of the work that comes out of this shop is unreal, and it shows me qualities like attention to detail.

I don’t want to be the best, I want to be one of the best, because everyone has different styles. I want to have a name [in the industry], like Laurie did. That’s something I aspire to have, and to be. I want to have my own shop and to have my name out there, and for people to look at my work and say the same sorts of things they did about Laurie’s work.

How will this award assist you in pursuing your goals and developing your skills?

CL: First off, being an apprentice I’m not on top-grade wages. But this is a massive jump forward for me, because as my dad knows, I’m always looking for new parts and things to throw at my car, but that costs money and this is going to help me get myself out there. To start your own thing you’ve got to have a portfolio, and this will help me get my cars and my name out there. 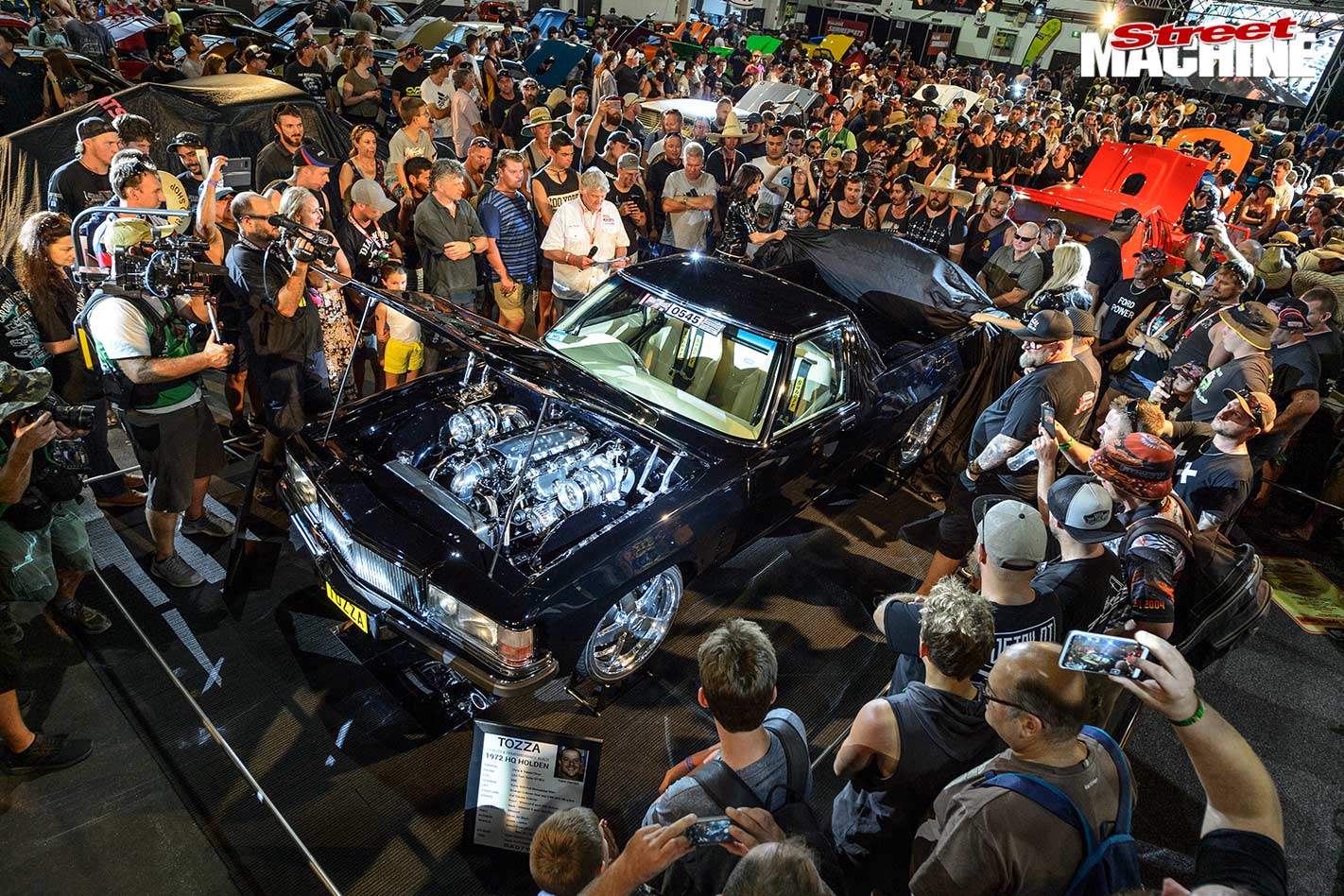 Corey had a small hand in one of this year’s Summernats unveil cars, namely Chris Clout’s TOZZA HQ

I believe you had a hand in one of the unveil cars at Summernats 31?
CL: Yeah, the twin-turbo HQ ute. When I started, the car was already mainly put together, and I did a couple of finishing touches and little details to it. I wasn’t as big a part of it as my boss was, but I did a few bits and pieces on it before it was sent off to body and paint.

Where to from here for you career-wise?
CL: My boss has quite an extensive knowledge of what he does. He has done street cars, he’s built a fair few drag cars, and he’s a painter as well. I want to absorb as much as I can from him and from anyone else I can, and use this opportunity to do more courses like auto electrics and further my painting – I’ve done a bit of that already. Further on down the track I’d like to do engineering courses to expand what I know so I can start to do things myself. I’ll be a one-stop shop. When I have my own shop down the track I’ll be able to do everything on my own, and I’ll be able to teach things that I know to people who eventually work with me.

Jamie, Laurie achieved a great deal in his career. How does it feel for you to know that there are young guys striving to follow in his footsteps and use him as an example?
Jamie Starling: It’s encouraging that in a world of mass production and quick fixes there are still young people coming through who are interested in working hard at solving a problem or innovating new ideas. I think that there doesn’t seem to be much passion around, so it’s energising to see that in younger men. We certainly want to encourage it where we can. 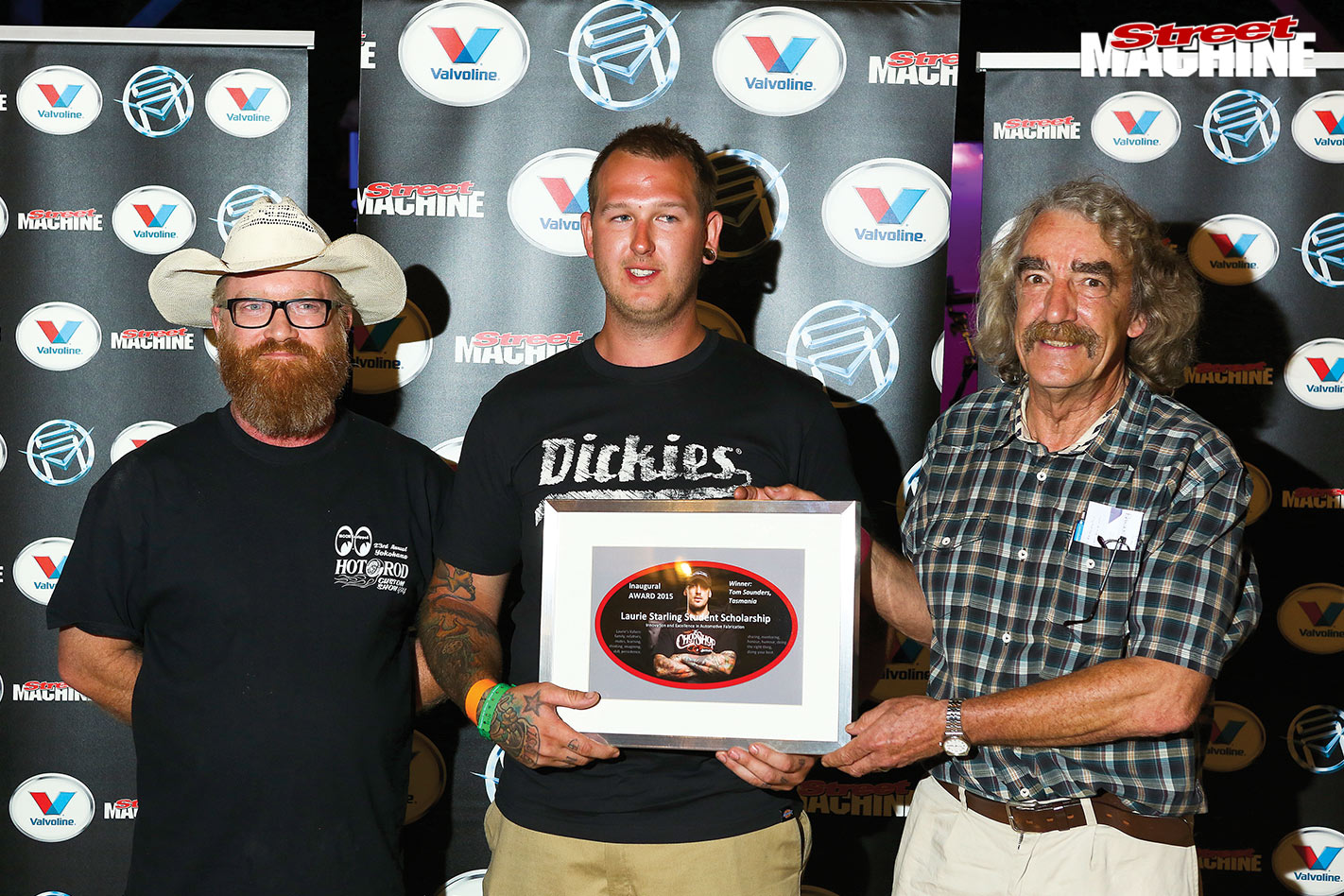 RS: Tom Saunders from Tasmania was the first winner, and he was actually a joiner by trade who wanted to get into fabrication. He finished his apprenticeship and we understand that he’s now started his own shop focussing on mini-trucks. At the time he had quite a reputation in northern Tasmania for being the go-to person for when people were having problems or trying to fix things that other people hadn’t done quite right. So it looks as if he’s off and flying.

Then David and Mick are both doing really well, and we have Mick’s ’33 roadster here on the stand this year – we had David’s truck last year.

Michael Anstey who won last year has started his own business as well, and actually taken factory space across the road from where the Chop Shop used to be, so he’ll have Norm Stewart as his mentor as well, which is great. Norm and Laurie did a lot together and Norm gave him so much advice. Inevitably they fought like cats and dogs as well, but the outcome was amazing. 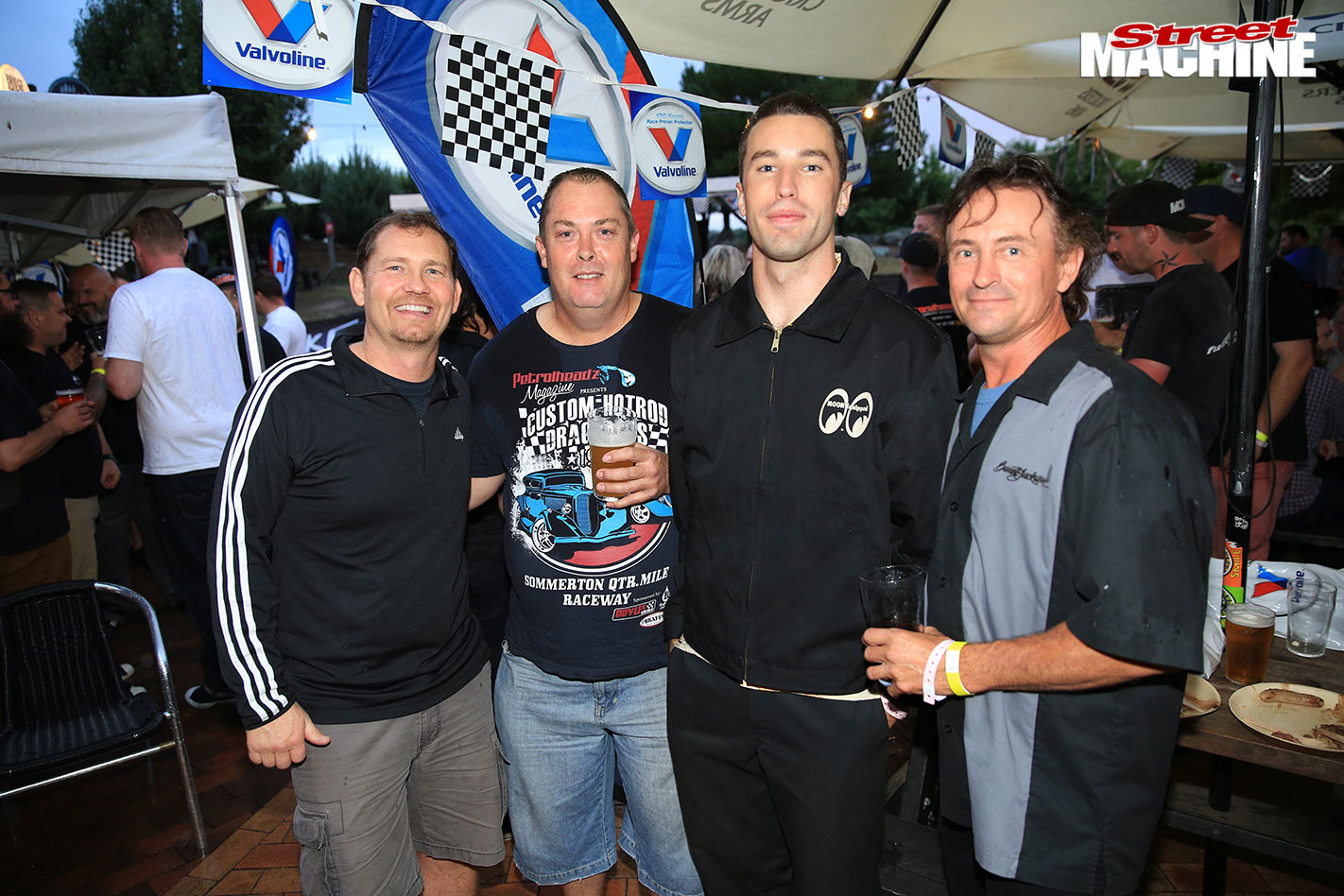 Part of what Michael wanted to do was get some training and experience in England, and he’s overseas at the moment, so he’s off and running. Unbeknownst to us he’s also persuaded Corey to join, which I’m really thrilled about, because what we want to do is get these guys working as a network over time.

The other thing I really appreciated last night at the Street Machine dinner was that the guys there were really encouraging of [the winners] as well. It was very quiet and respectful during the presentation, and then these winners now have a bit of a label where they can go and talk to these guys and they’ll be listened to. It gives these guys a bit of a leg up into that space.

We got a text in March or April saying that the mini-truckers in the States had considered their nominations and had decided that Laurie would be inducted into the mini-truck hall of fame at SEMA. The Negative Camber club, of which he was a part, crowd-sourced funding for Julia and I to go over and receive the award on his behalf. His brother Geoff came down from Canada with his son. There is a strong link there into which these guys over time will gain an acceptance or a presence. It’s a big family. Laurie’s mates were always at the house, raiding the fridge – and my beer!

Everyone has been tremendously personally affected, but we’ve all found a lot of strength in being able to spend a lot of time together. Much of that time is laughing and joking – because Laurie was a bit of a scallywag – and we’ve had many reminiscences and rarely too many that are the same. They are tinged with sadness, but Laurie made the most of the time he had, and we must do the same. We have to keep that energy, connection and family going and growing.

For more info, check out the award website here