AFTER weeks of teaser videos, Dodge has finally revealed the Challenger Demon in New York. The new model is the most extreme factory version of the Challenger ever created, and will sit above the Hellcat as the brand’s hero model now that the Viper is out of production. Dodge’s aim with the Demon was to create the quickest street-and-strip production car on the planet, and, well, they’ve done just that. 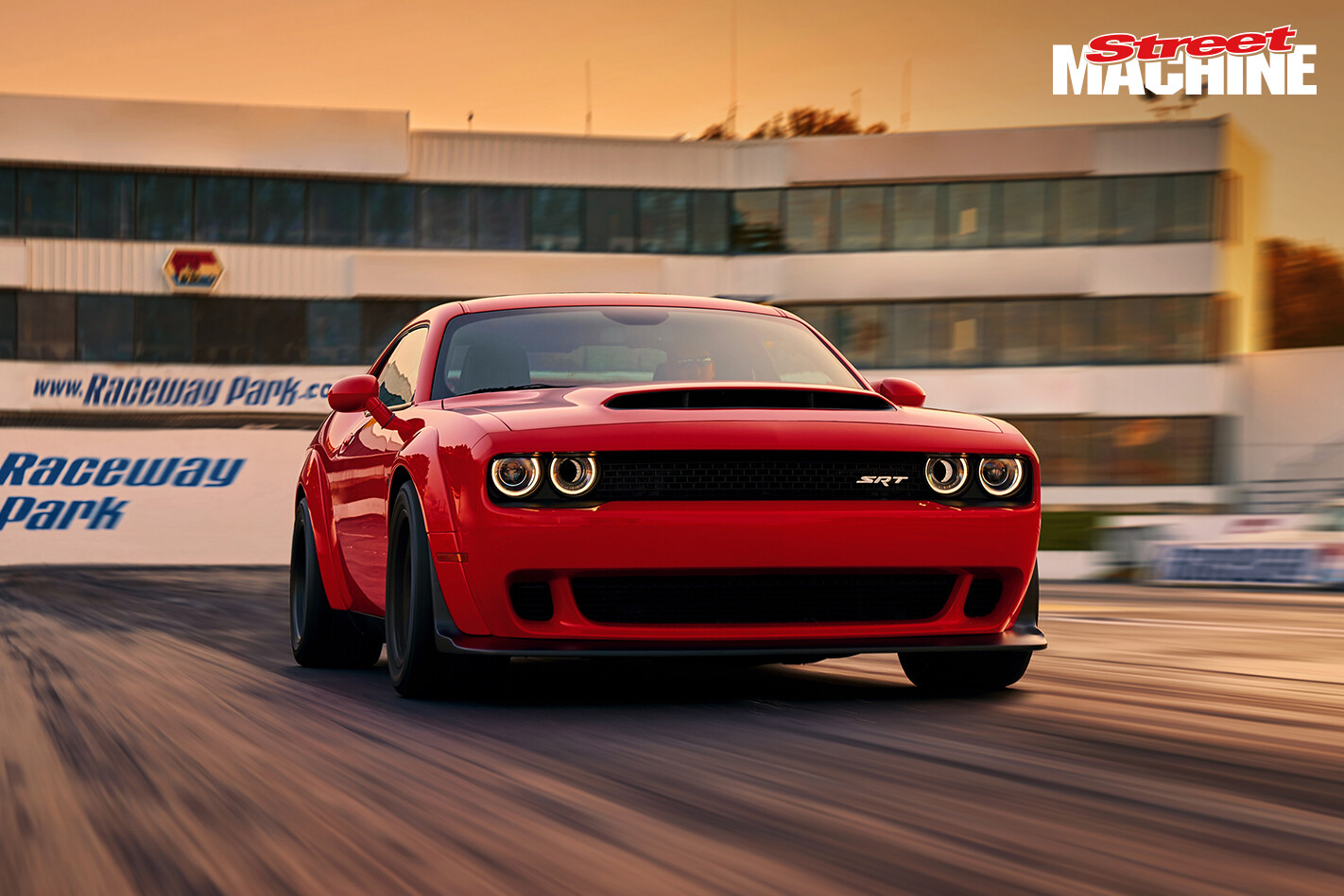 We won’t string it out any further; the Demon covers the quarter-mile in an NHRA-certified 9.65 seconds at 140mph, making it the quickest production car on earth down a drag strip. It’ll also do 0-60mph in just 2.3 seconds – also a production car record, though we reckon you’d struggle to match that figure on anything other than a prepped drag strip. The Demon also has the record for longest production-car wheelstand – don’t get too excited, it’s only 2.92 feet. It’ll also pull 1.8G of accelerative force, apparently also a production car record. It's actually so fast, the NHRA have had to ban it from the drag strip because it has no roll cage - go figure. 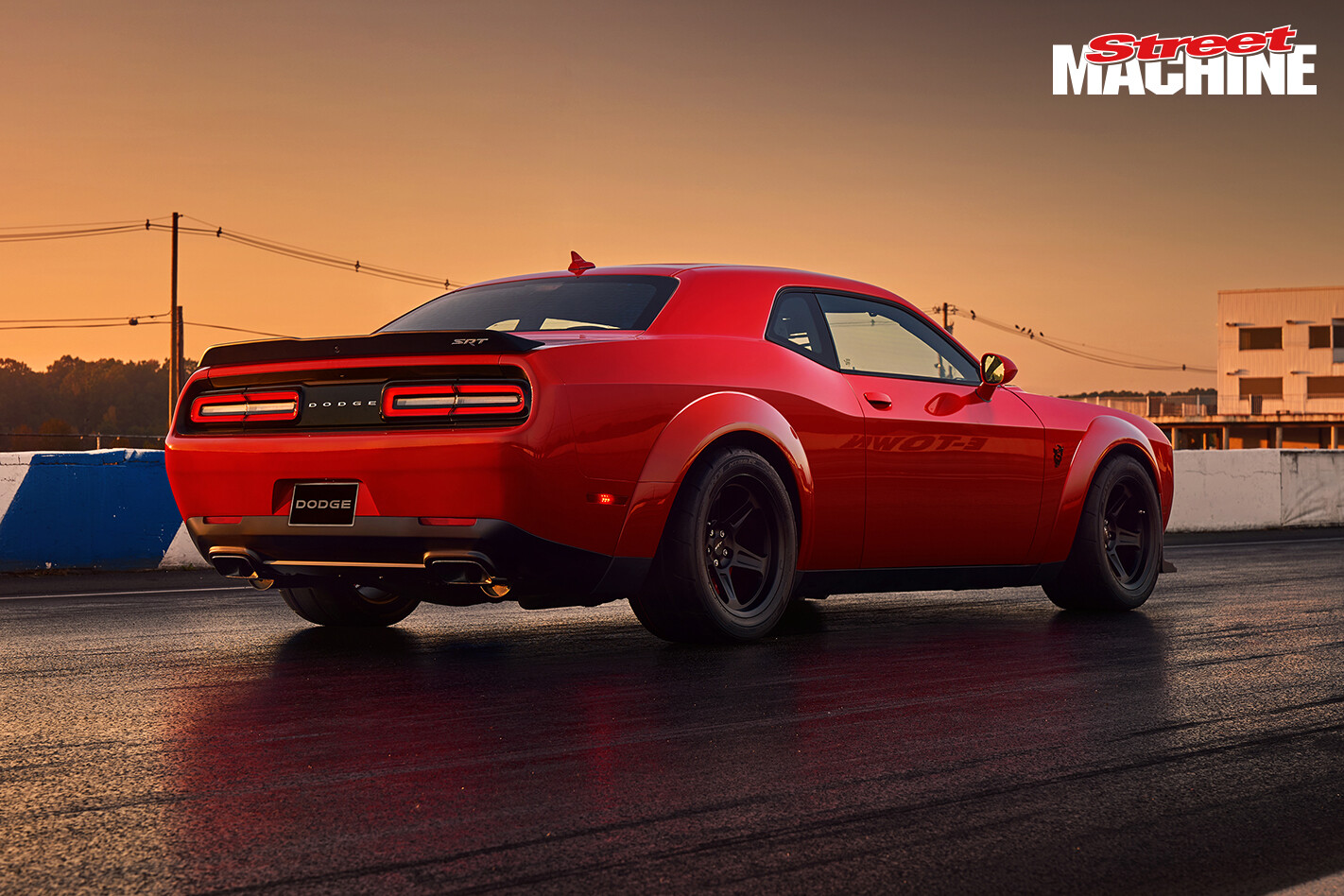 So how does the Demon do all of this? Well Dodge took the already insane Challenger Hellcat and turned it up to 11. Let’s start with the engine, as the rest of the driveline has been detailed in teasers for the past 12 weeks. The 6.2-litre supercharged V8 remains, though the unit in the Demon is a fairly different animal to the one in the Hellcat. For starters it has a larger blower – 2.7 litres instead of 2.4 litres – and it runs 14.5lb of boost compared to the Hellcat’s 11.6lb. The internals are also all new, with different rods, pistons, camshaft and crank to help the Demon rev to 6500rpm instead of 6200 in the Hellcat. The Demon also has an upgraded fuel system with twin pumps and bigger injectors, and has the ability to run on 100-octane-or-higher race fuel. The result is 808hp on 91-octane fuel, and 840hp and 770lb-ft on 100+ octane juice. If we’re honest, with all the hype we were expecting a bit more, though 840hp from a high-volume (over 3000 units) production car its nothing to sneeze at. 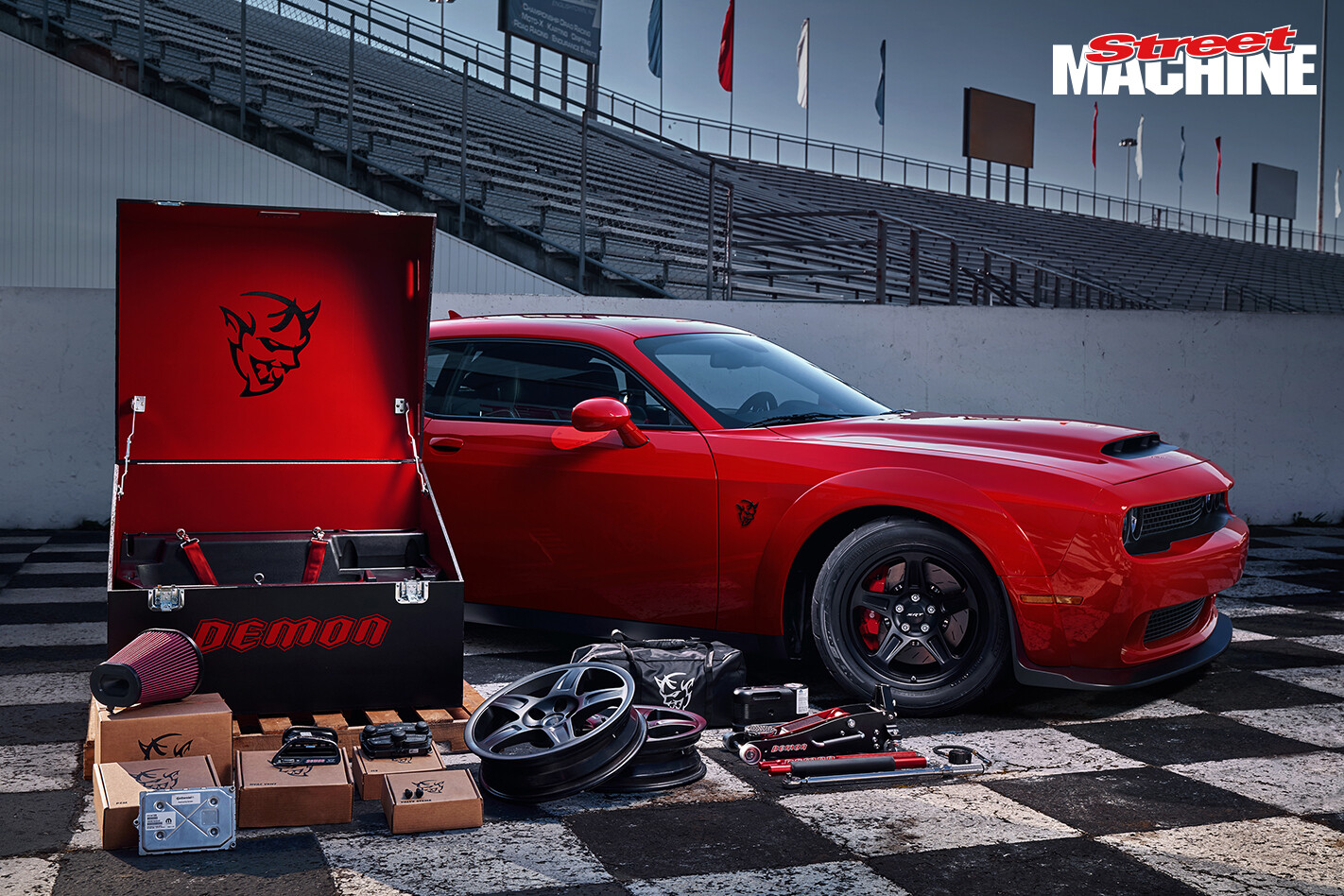 To get the full 100+ octane experience, owners will first have to swap out the standard ECU for one calibrated for higher-octane fuel, which will be found in the crate of tools and goodies included with all Demons – it even contains skinny front-runner wheels and tyres. 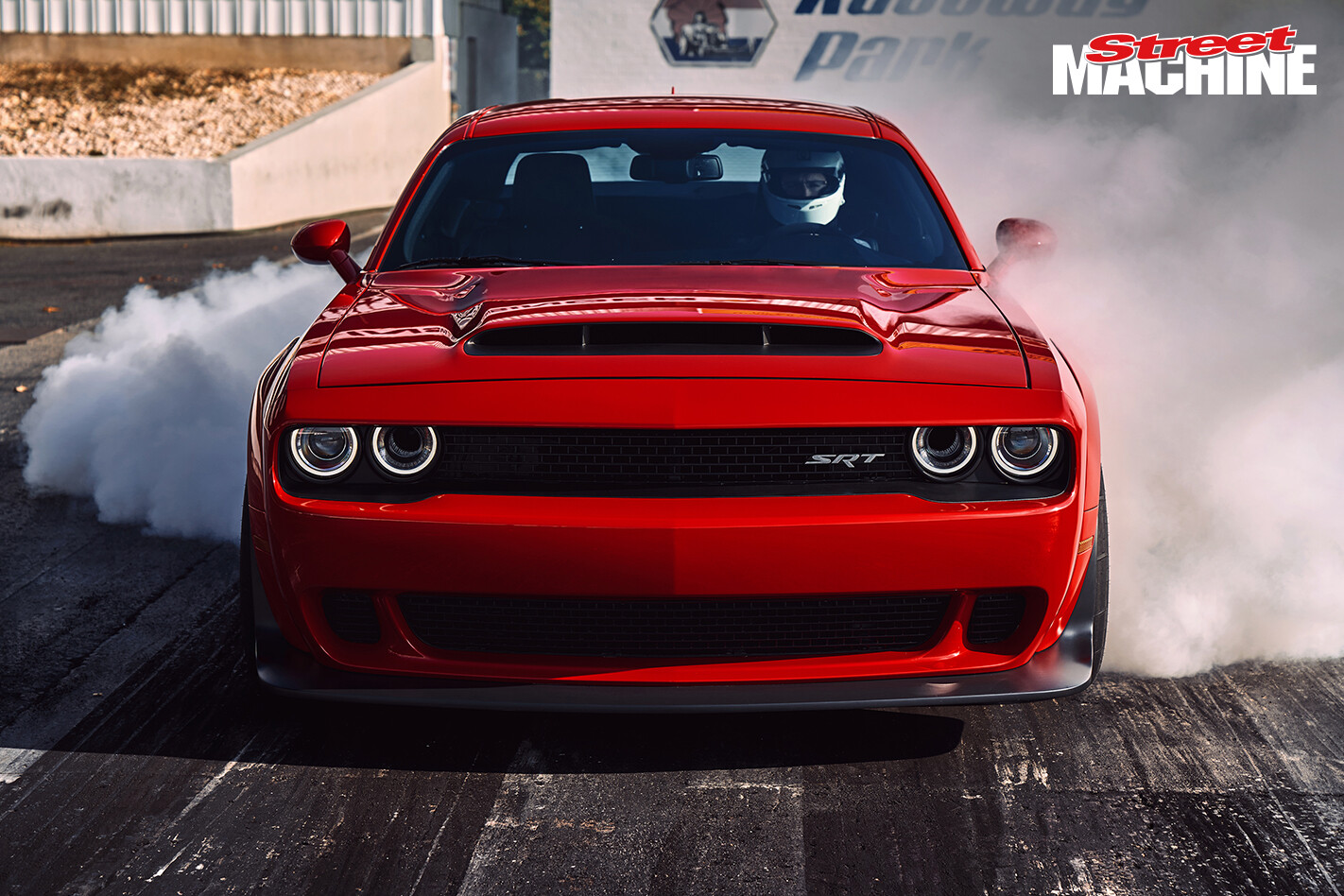 To keep it all cool the Demon also has the largest cold-air intake ever fitted to a production car – hence the giant scoop. On top of that it also has liquid-air intercooling for the supercharger using the car’s air conditioning condenser, so no matter how warm ambient temps are, the blower will always receive chilled air. 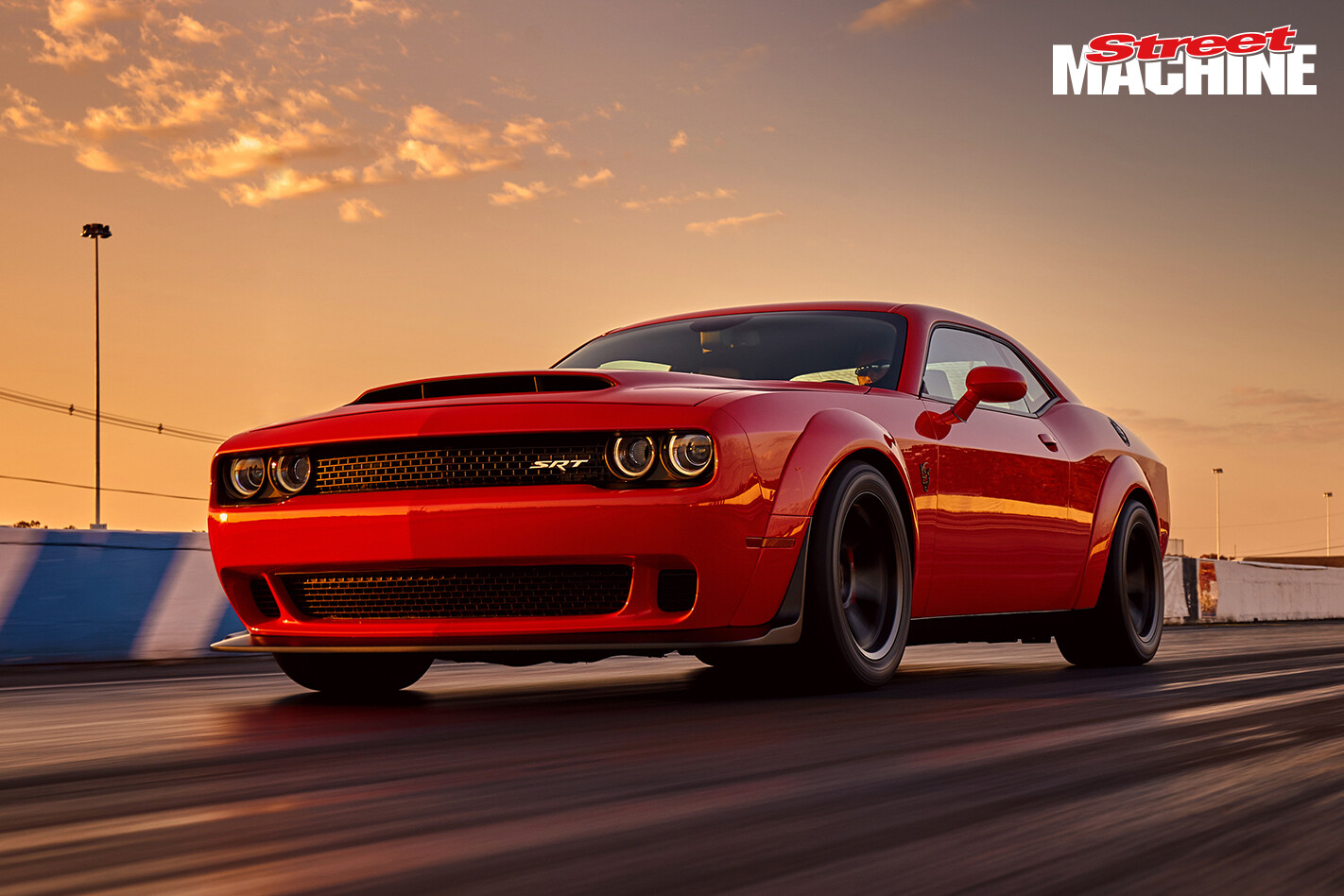 If you’re like me, you might be wondering how a near-2000kg car could run a mid-nine-second quarter with just 840hp. Ok, they’ve taken out the passenger and rear seats, plus other stuff equating to around 90kg but it’s still a big old bus. Well, the Demon has all kinds of neat tricks hidden up its sleeve, starting with those tyres – they’re special street-legal Nitto drag radials measuring 315/40R18, and as you can see they’ve fattened up the body to make them fit. The Demon also has a production car-first launch control system derived from what we’re familiar with from the drag strip. It has a transbrake and two-step launch control that builds up to 8lb of boost pressure on the startline without the car moving or using the foot brake. The system manages ignition timing and fuel to hold the car at 2350rpm, before the transbrake button is released and she launches down the strip. A new high-stall converter and a swap from 2.62 diff gears to 3.09s also helps it get out of the hole harder. 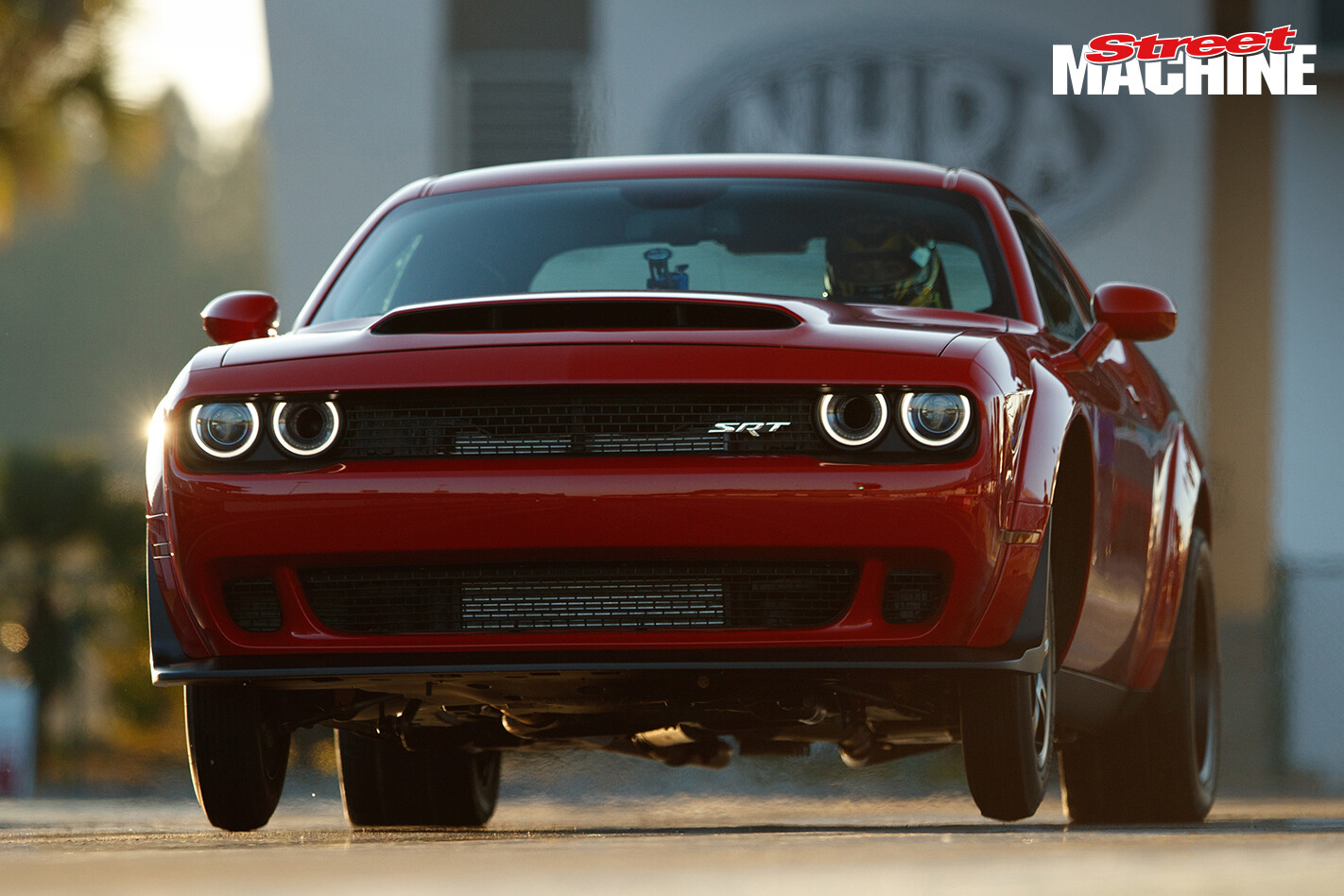 Even the suspension has been tuned and calibrated for maximum drag strip performance. When launch control is activated the electronically adaptive shocks automatically soften at the front for maximum rearward weight transfer to help traction. The traction control has also been tuned to detect and minimise axle tramp. 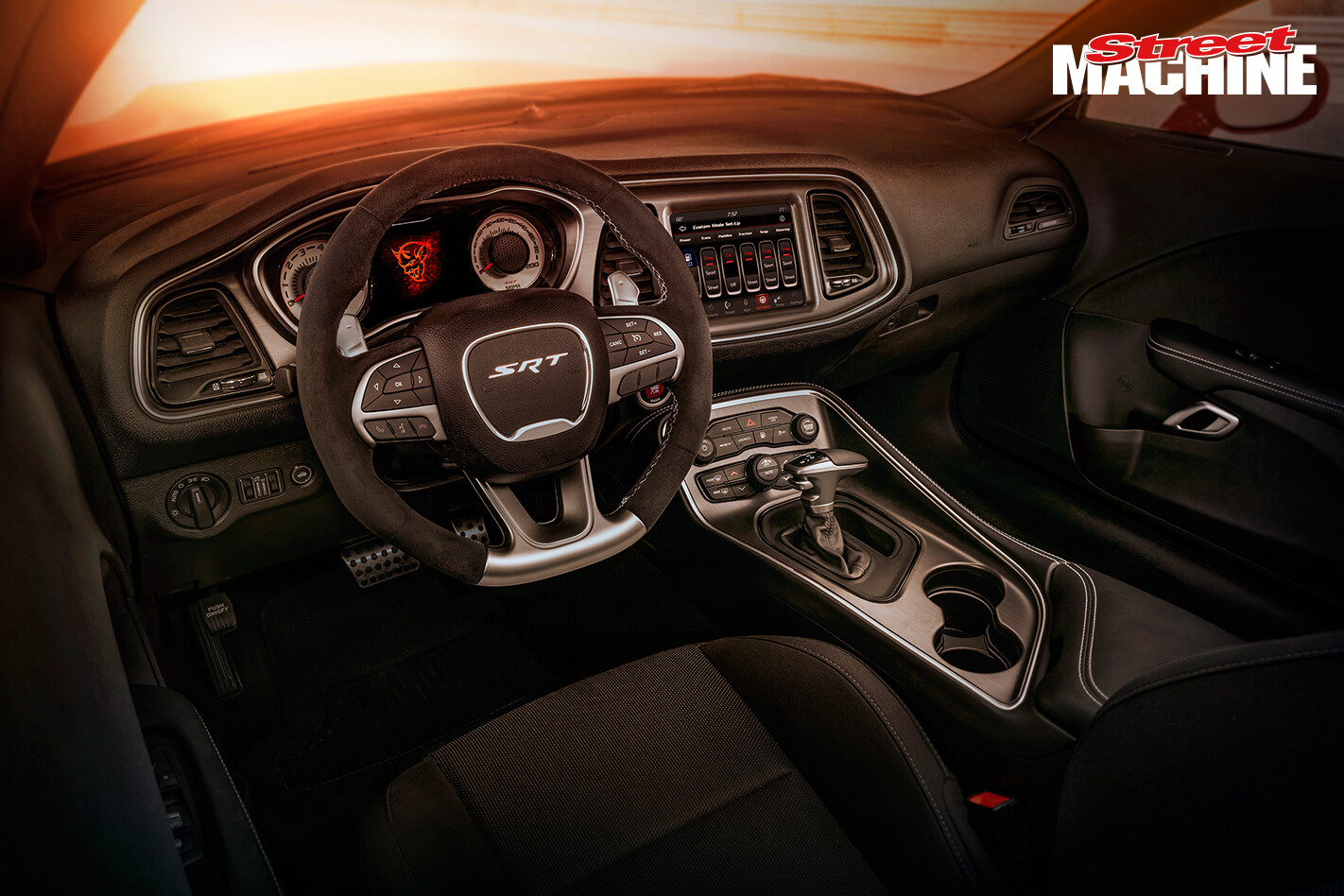 No word on price yet, though under $100,000 USD seems about right. Will any make it to Australia? Not officially, but here's to hoping someone imports on of these things and we see it get down an Aussie strip.