A NEAR-standard Hyundai Santa Fe has made history by becoming the first passenger vehicle to be driven across Antarctica, from Union Camp to McMurdo and back again (for those who know their geography).

Making the feat even more extraordinary is that the 30-day expedition was achieved with Patrick Bergel in the driver’s seat. Who?

Bergel is the great grandson of Sir Ernest Shackleton, the legendary polar explorer who, from 1914-1916, led the heroic Trans-Antarctic Expedition. 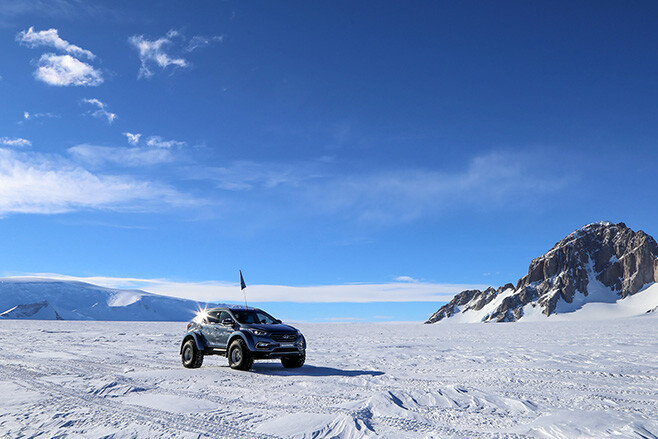 One hundred years later, this new expedition (spearheaded by Hyundai to make a short film), was timed to commemorate the centenary of Shackleton’s legendary journey.

Scott Noh, Head of Overseas Marketing Group, Hyundai Motor Company, said: “We were aware of Sir Ernest Shackleton’s story and as a company felt a resonance with his courage and pioneering spirit. Our film celebrates this spirit and through Patrick, his Great Grandson, completes his dream to cross Antarctica – just a hundred years later.” The 2.2-litre diesel-powered Santa Fe was only slightly modified to fit giant low-pressure tyres. The car’s body was raised with new sub-frames and suspension, and gears were fitted inside the wheel hubs. The only other modifications were increasing fuel capacity, converting the car to run on Jet A-1 fuel (the only fuel on Antarctica) and installing a pre-heater for the cold climate. The engine, management system, transmission, front diff and drivetrain all remained standard.

The history-making 5800km icy journey, achieved in December 2016, saw temperatures drop to -28°C, but it was a memorable experience for all involved, especially Bergel.

“The journey was incredible and the car was a pleasure to drive. Sometimes it felt less like driving and more like sailing across the snow. It was a proper expedition with a challenge to accomplish what nobody else had done before,” he said. “It was about endurance not speed – we averaged only 27km/h – and success was about how we and the car handled it. I’m very reluctant to make direct comparisons between what my great grandfather did and what we’ve done recently, but it is quite something to have been the first to do this in a wheeled vehicle.”