THE famous Easter Jeep Safari in Moab, Utah, is about to begin, and that means all of us off-road fanatics get the chance to see what crazy off-road concept vehicles Jeep and Mopar have come up with for this year’s event.

Seven rugged concept rigs, all of which feature plenty of off-road aftermarket gear from Mopar and Jeep Performance Parts, will be crunching the challenging Moab trails at the 52nd running of this famous annual Jeep event, and it’s something Jeep’s head honchos look forward to each year.

“Pushing the limit is something the Jeep brand is no stranger to, and these seven new, exciting and capable concept vehicles are the latest example of that,” said Mike Manley, Head of Jeep Brand, FCA. “Every year we look forward to introducing new concept vehicles and ideas to our enthusiasts. The Moab Easter Jeep Safari presents a unique and perfect opportunity to collect valuable insight from our most loyal customers.”

As you’d expect, Jeep’s Wrangler once again hogs a majority of the spotlight, with five of the seven modified vehicles based on the brand’s iconic model.

“When it comes to customisation, no vehicle can match the Jeep Wrangler,” said Pietro Gorlier, Head of Parts and Service (Mopar), FCA. “This is why we worked very closely with the Jeep brand… Almost all Wrangler vehicles sold are fitted with at least one Mopar accessory, and you see this perfect combination between vehicle and accessories come to life every year at the Easter Jeep Safari.”

4SPEED ON THE FLOOR - 4SPEED Concept 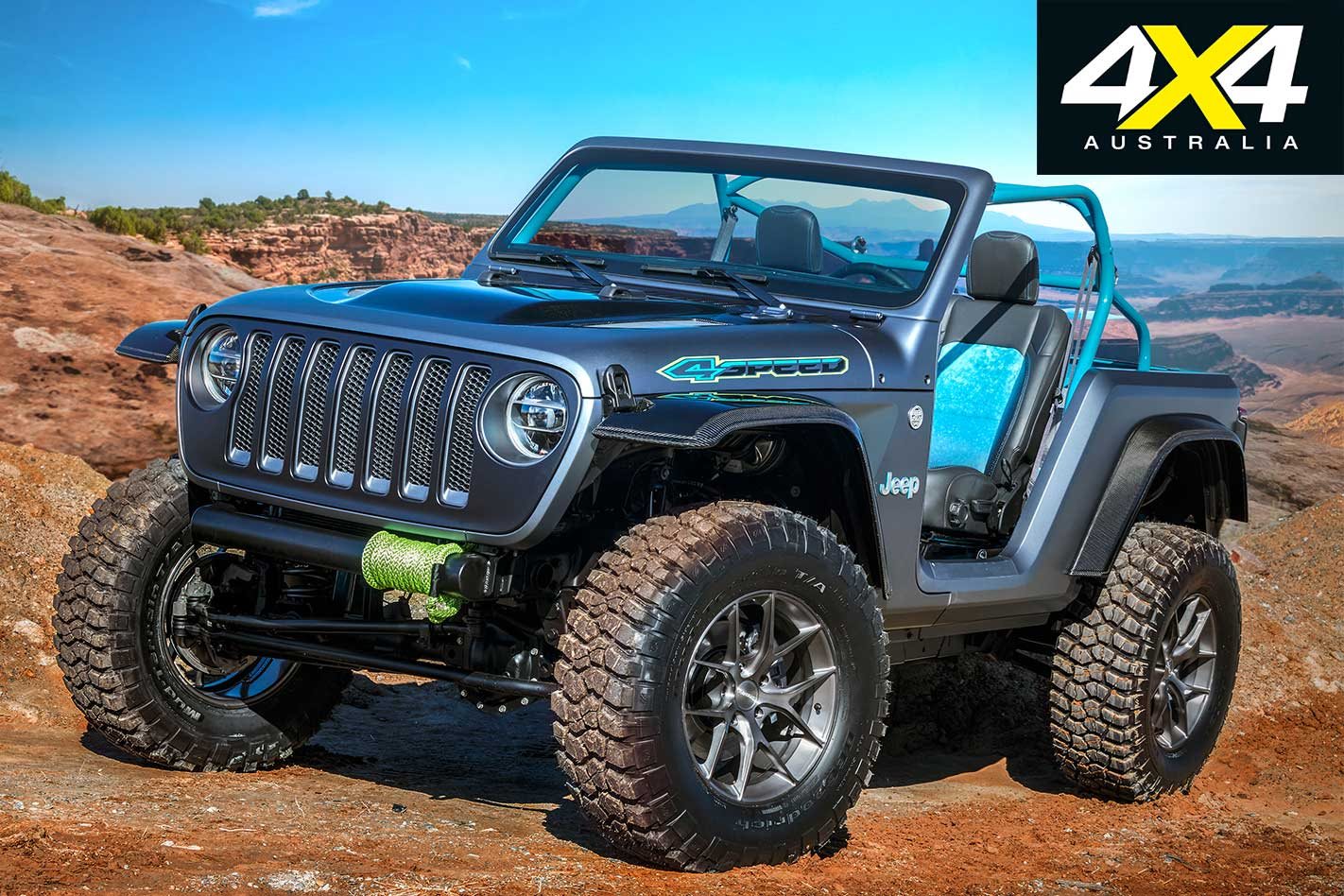 LIGHT, fast and nimble is how Jeep describes the 4SPEED concept, a welterweight successor to the 2011 Pork Chop and 2013 Stitch, carrying over that duo’s doors-off styling, as well as offering a shortened body (but stock wheelbase length) for improved approach/departure angles. Further assisting its off-road cred are Dana 44 front and rear axles with a low 4.10 ratio, along with 35-inch BFGoodrich muddies rolling on trick 18-inch monoblock wheels.

The 4SPEED attains its light weight via extensive use of carbon fibre, as the bonnet, fender flares and rear tub are all carbon-fibre. Powering this little big-bopper is Jeep’s new 2.0-litre turbocharged inline four-cylinder engine. 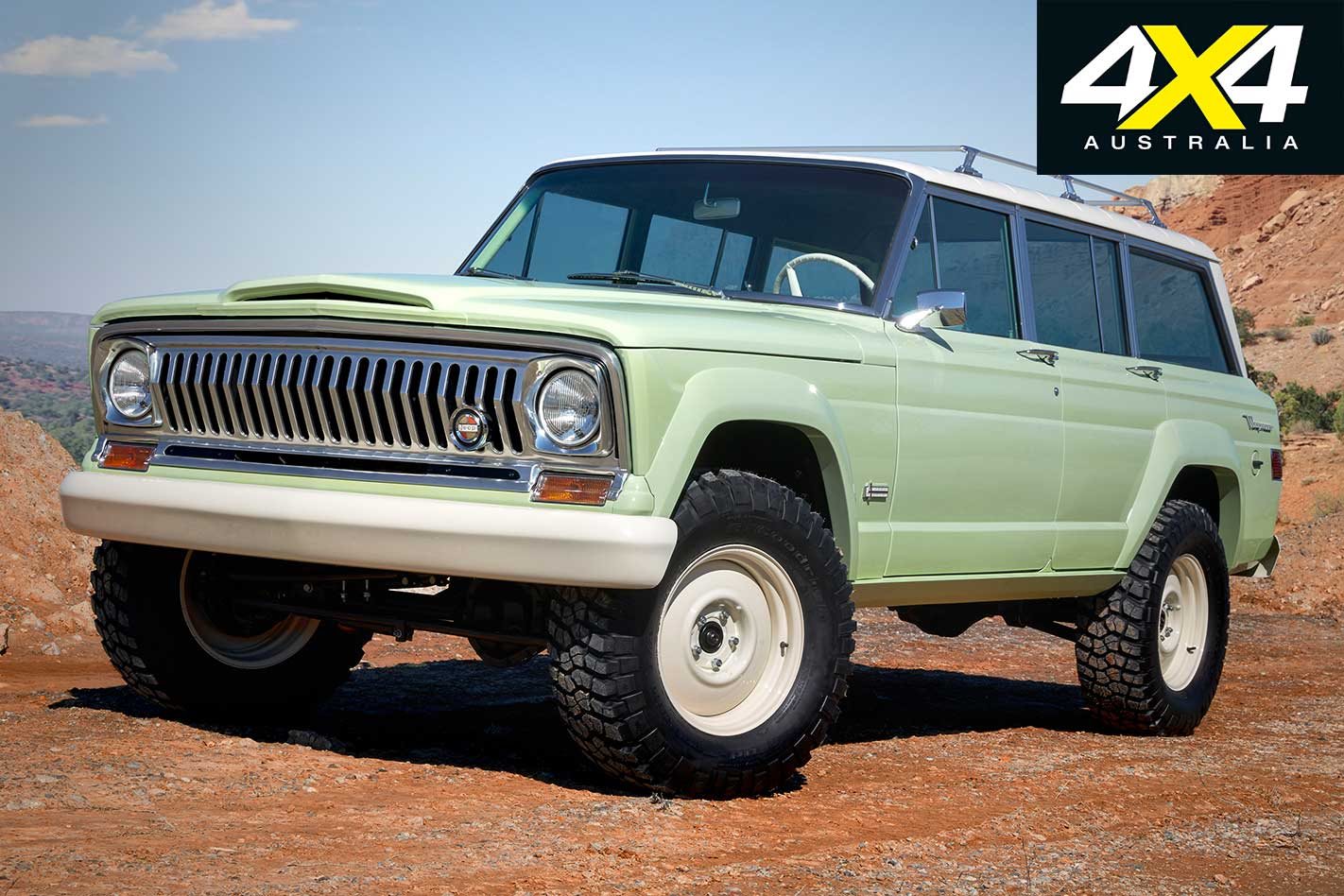 THE Jeep Wagoneer was originally produced from 1963 to 1991. This Jeep Wagoneer Roadtrip is a nod to that heritage, being based on a 1965 Wagoneer and retaining that vehicle’s original steel body, with a number of drivetrain and chassis tweaks.

The wheelbase has been lengthened considerably (125mm) and the body stretched to suit, while custom fender flares cover the widened track of this modified rig. Integrated rock rails offer belly protection and are the finishing touches to a raft of hardcore off-road mods that include Dana 44 front/rear axles (with diff locks), a four-link suspension setup (with coils) and strong 17-inch steel wheels shod with 33-inch BFGoodrich Mud Terrain rubber.

Jeep to revive the Grand Wagoneer

The interior has retained its original appearance (front/rear bench seats, door panels, etc.) with the addition of a custom cooler and a rad toolbox made using the valve cover off the vehicle’s original 230 Tornado six-cylinder engine. The new engine is a sweet 5.7L V8 backed by a four-speed auto. Nice, very nice… 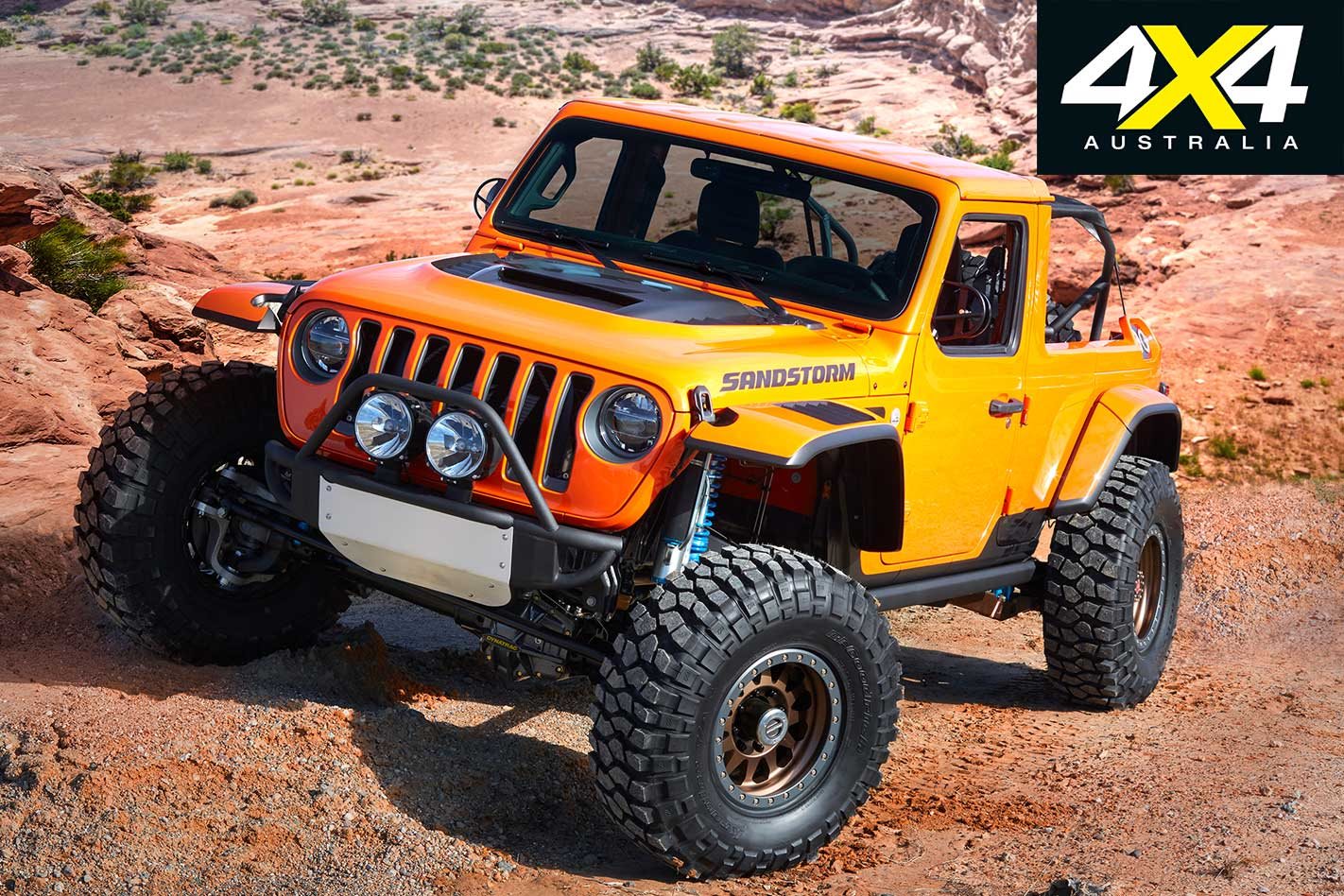 FROM heritage to driving trails in a hurry, the Jeep Sandstorm is – as the name hints – built with one thing mind: rapid movement across desert terrain, drawing its engineering and styling from Baja desert racers. Power is via a monster 6.4L V8 (drawn from the Mopar Performance catalogue, no less), backed by a six-speed manual transmission. The Baja styling is clearly evident with a vented carbon fibre bonnet, more vents on all four fender flares and a spare wheel mounted flat in the rear cargo/cage area. The rear doors have been chopped as well.

Other off-road accessories include high-clearance front/rear bumpers, rock rails and an on-board air compressor. Ensuring oodles of off-road capability, the Sandstorm has had its front axle moved forward 100mm and now features a heavy-duty long-arm four-link suspension and track bar setup. The rear axle has also been moved back (50mm) and uses a triangulated trailing arm four-link suspension. This longer wheelbase is ideal for stability, as is the custom coilover/bypass shock setup underneath, improving front and rear wheel travel significantly.

Upping durability even more is a set of Dynatrac 60 axles front and rear, with an ultra-low 5.68 gear ratio, pushing a set of 17-inch beadlock wheels and huge 39.5-inch BFGoodrich Krawler tyres. The interior is suitably race-styled, with an integrated custom cage, race-inspired instrument cluster and a bed-lined floor. 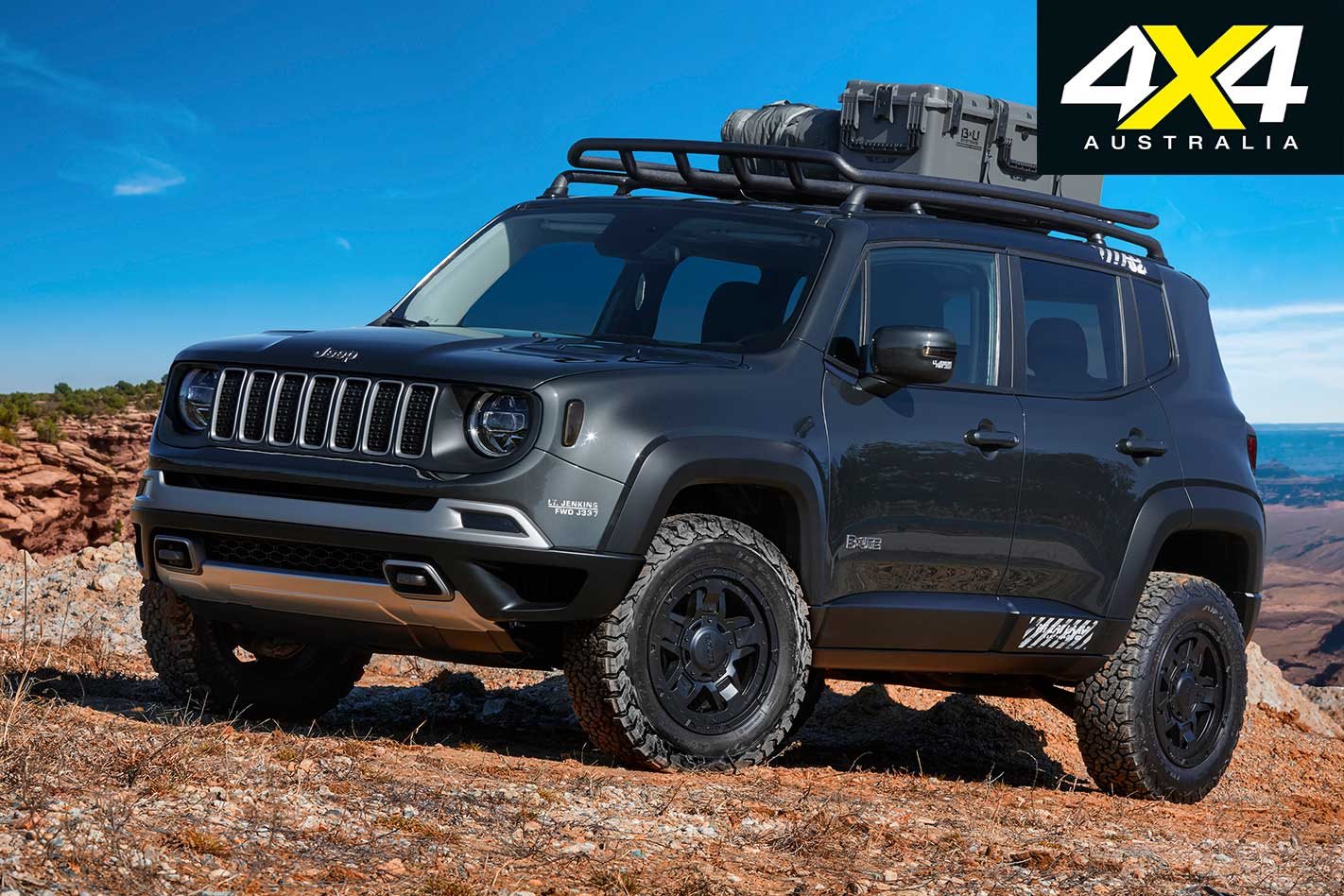 THE B-Ute is based on Jeep’s Renegade soft-roader (powered by a 2.4-litre petrol engine and nine-speed auto) and showcases numerous accessories available for this diminutive off-roader. A 1.5-inch lift and 30mm-offset 17-inch wheels/BFGoodrich T/A Champion tyres (covered by wider fender flares) give the B-Ute a more purposeful stance. This is backed up by the bonnet’s heat extractors (vents) and fitment of a roof-rack and rock rails.

A tricked-up interior – carbonite and piano-black cosmetic highlights and all-weather mats – complete the mods. Yeah, it looks tiny, but we reckon you could still have some serious fun in this little Jeep. 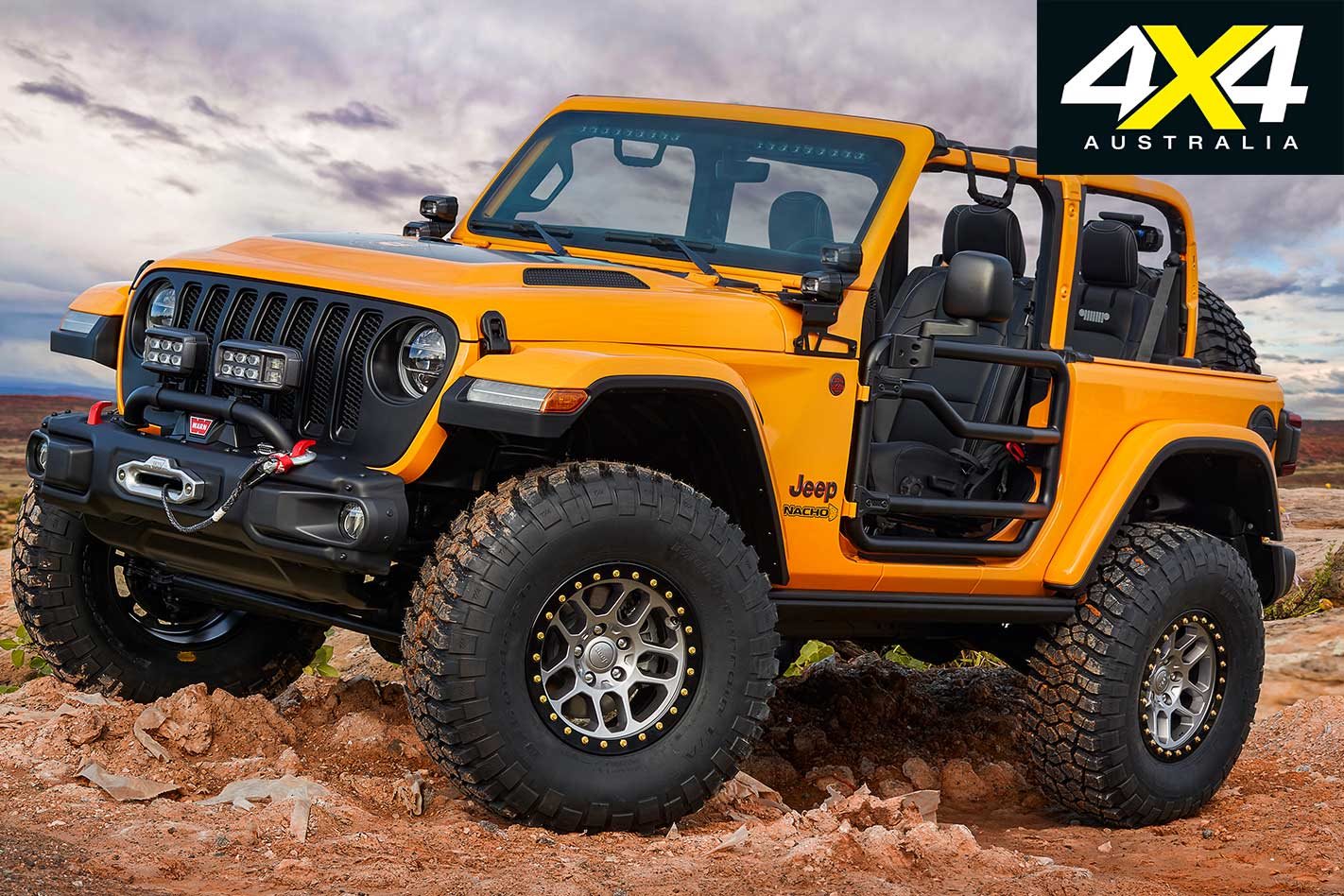 The Nacho Jeep – yeah, the colour, hence the name – features a number of Jeep Performance Parts (JPP) such as the JPP-badged bonnet that includes a cold-air intake to feed the 2.0-litre turbo four-cylinder petrol donk.

Also fitted are LED lights (on the A-pillar and brush guard) that are mounted via JPP brackets and work in conjunction with LED header lights that are fitted to the top of the windscreen to light up the trail ahead. Finishing the frontal treatment is a Mopar grille and a Rubicon bumper that is fitted with a Warn winch.

The Nacho rides 50mm higher courtesy of a lift and is fitted with beefy 55mm-diameter aluminium shocks. Large 37-inch tyres roll on 17-inch beadlock wheels to provide even more body clearance. JPP rock rails and 50mm round tube doors enhance the sense of purpose. Keeping with the practicality bent, the spare tyre tailgate hinge is reinforced to lug one of those big 37-inch spares. The interior is all-leather (Black Katzkin) with accented light tungsten stitching. 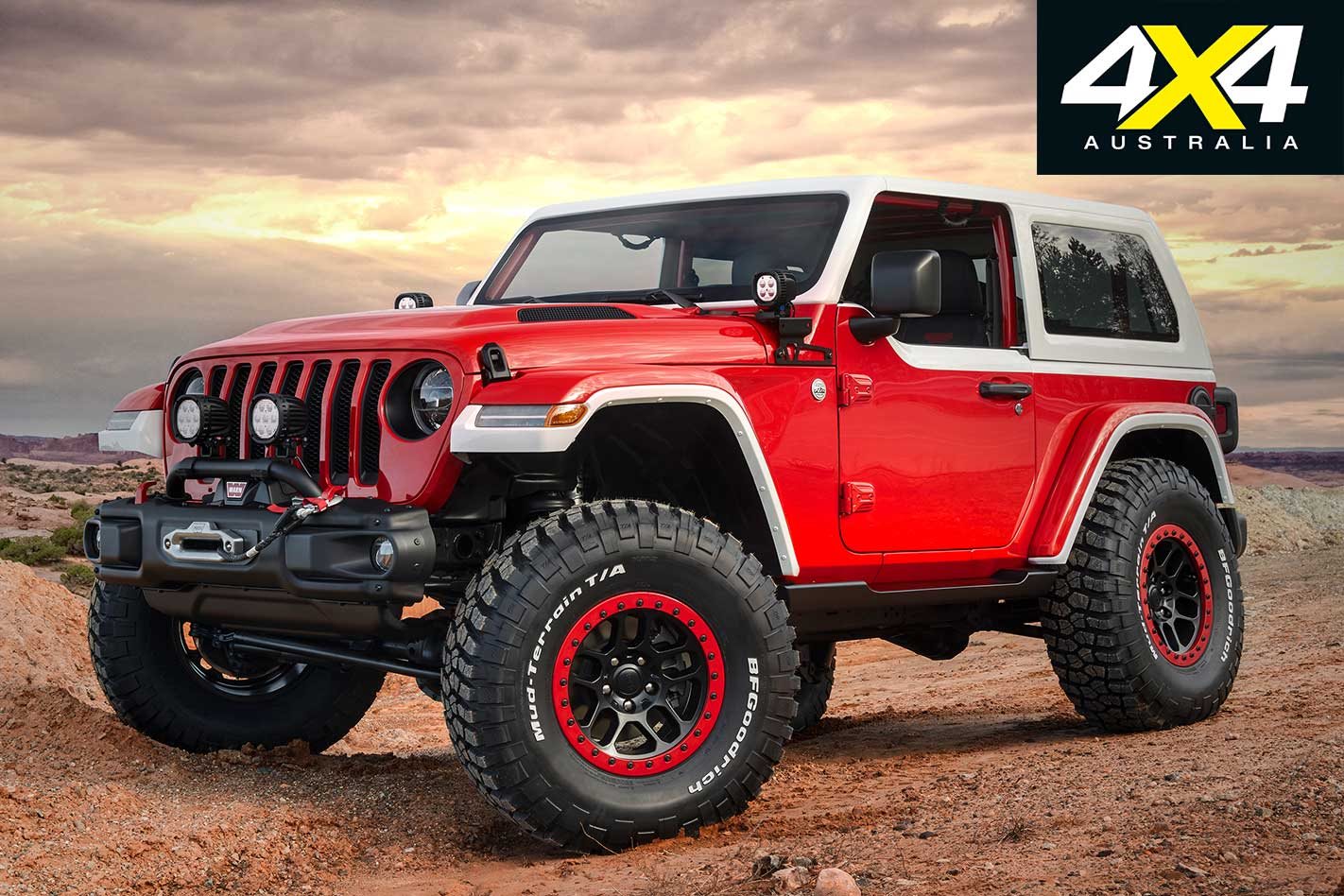 THE Jeep Jeepster (say that fast five times, we dare you) is based on a Rubicon Wrangler with styling and two-tone paint job (Firecracker Red/Bright White) hinting at the original 1966 Jeepster. The concept’s hardtop has been chopped by 50mm and the custom windshield is raked back 2.5-degrees more than normal, promoting a sleeker profile. Impressively, the windshield can still be folded down.

The JPP bonnet on the Jeepster does away with the cold-air intake, while the numerous LED lights (5- and 7-inch sizes; two are also fitted to the Rubicon front bumper bar along with a Warn winch) punch out up to 8000 lumens of brightness. Along with all that brightness and bling, the Jeepster is also uber-capable off-road.

Featuring a 50mm lift and oversized 55mm body shocks, along with 37-inch BFGoodrich KO2 tyres (rolling on 17-inch beadlock-capable wheels), the Jeepster has an impressive amount of clearance.

The concept’s tubular roll cage replaces the stock sports bar and the spare wheel has been relocated to a custom in-cabin spare tyre carrier. This also allows for a set of concept storage packs to be mounted to the Jeepster’s tailgate – ideal for storage of food, tools and water. The rest of the interior is premium, with black leather seats and a Firecracker Red instrument panel inserts offsetting the darker colours. 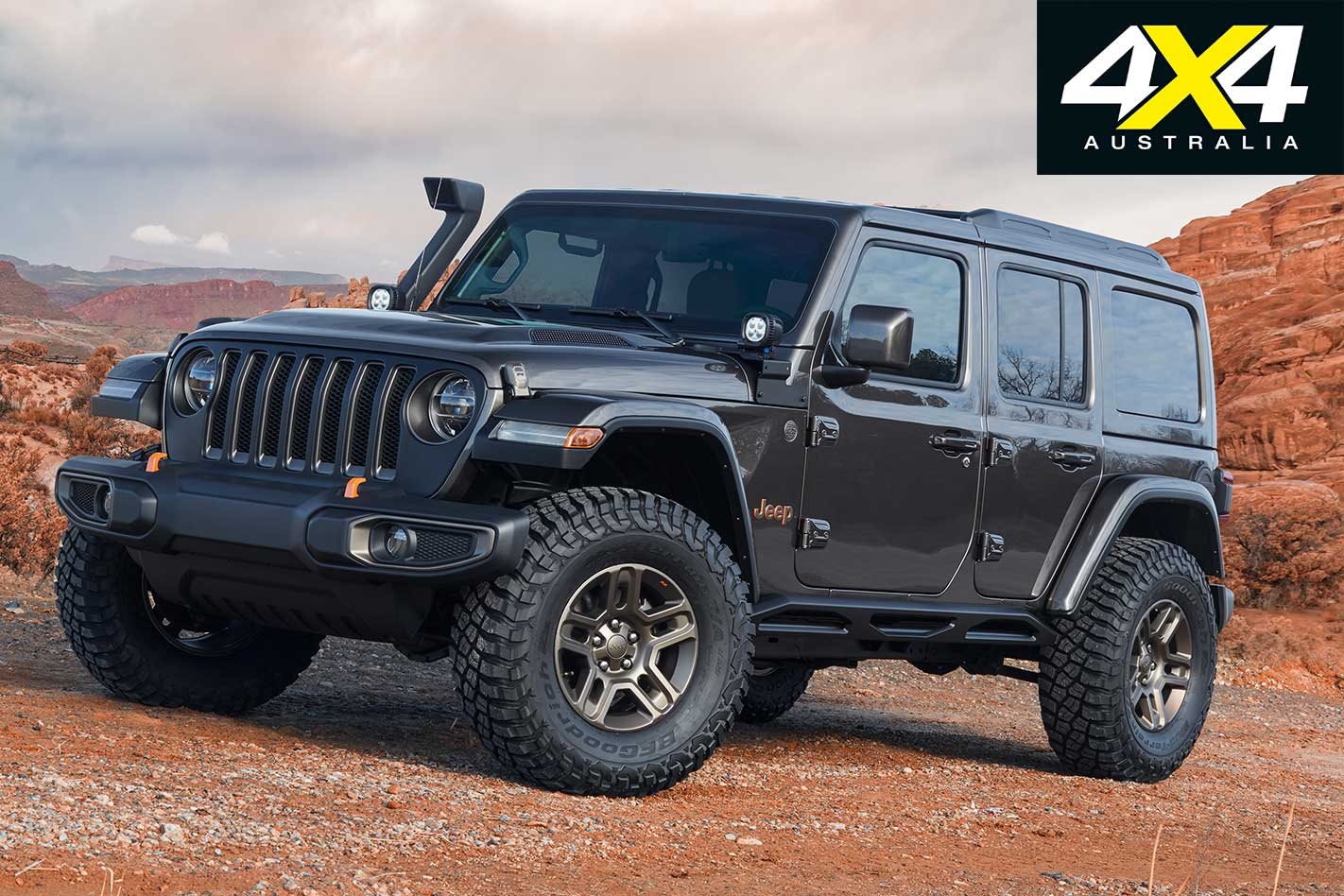 THE Jeep J-Wagon is a Wrangler four-door-based concept designed to reflect the fact that most owners will use their Wranglers both in town and off-road. The premium styling is enhanced by the Warm Neutral Grey paintwork and tinted windows, with a JPP bonnet featuring a cut-out kit suited to the optional snorkel. New 5-inch LED lights assist with night driving.