The Jeep Easter Safari is a nine-day event located in the scenic Moab area of Utah. Hosted by Moab’s Red Rock 4 Wheelers four-wheel drive club, it’s made up of trail rides through this iconic and demanding area.

It’s also the perfect setting for Jeep to unveil their wild concept vehicles for the year.

“Moab Easter Jeep Safari has long been our testing ground for both our newest Jeep 4x4s and for showcasing new Jeep brand concepts, Jeep Performance Parts and Ideas that truly resonate with our most Passionate customers – the die-hard off-road enthusiasts who attend this event every year,” said Jim Morrison, Vice President of Jeep Brand North America.

“This year’s Safari shines a spotlight on what makes Jeep vehicles unmistakably distinctive and undeniably capable – a variety of powertrains that deliver superior power, performance, torque and, above all, fun. Moab’s demanding trails are a worthy opponent for our Jeep Wrangler and Jeep Gladiator concept vehicles.”

This year, Jeep certainly isn’t mucking around, with such a wide range of concept vehicles on offer. Let’s take a closer look at what they have been working on for the event. 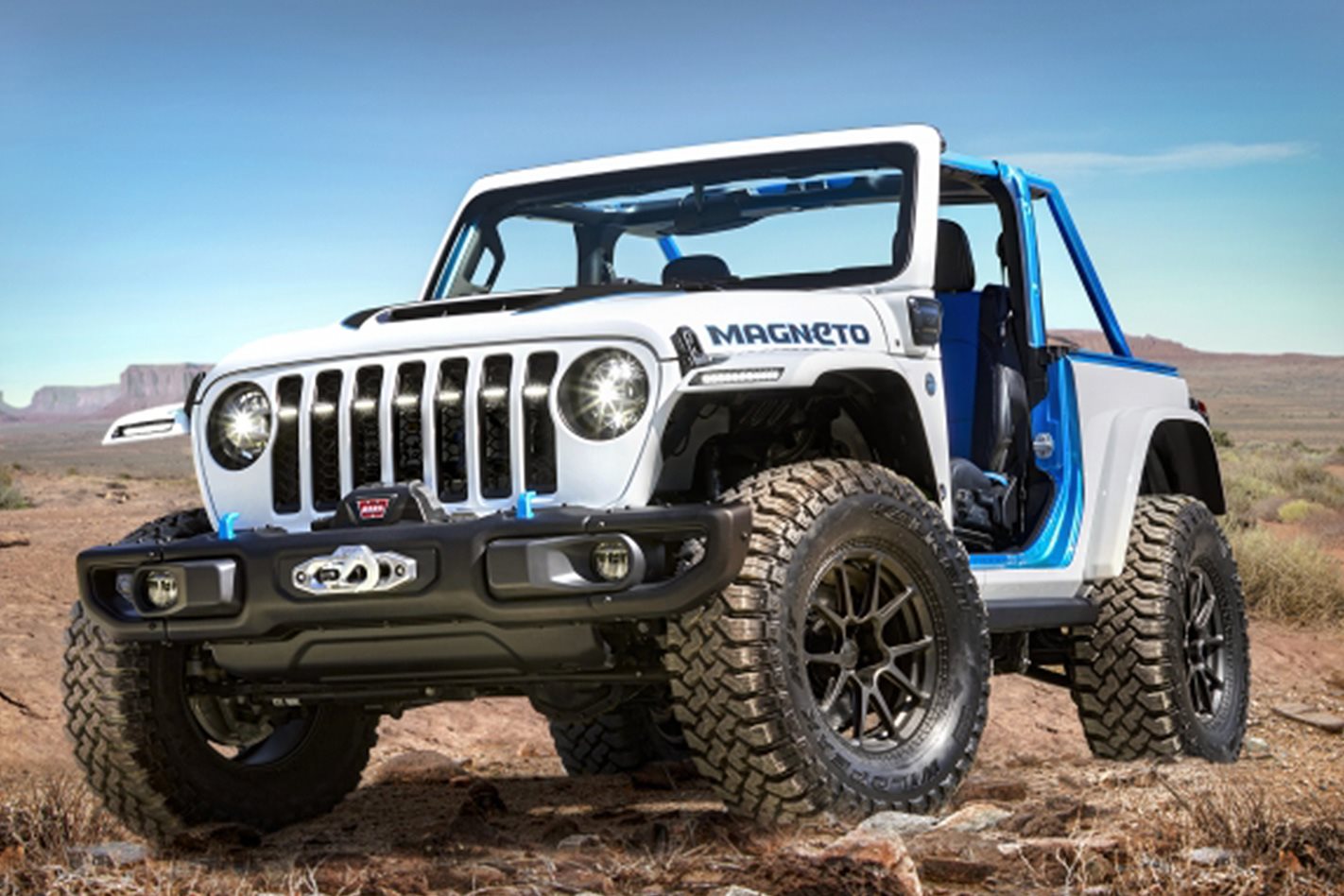 The Jeep Magneto is an all-electric concept based on a 2020 two-door Wrangler Rubicon that Jeep tells us is quiet, quick and an unmistakable rock-climbing force. A zero-emissions vehicle with the same 4x4 capability you’d expect from any Wrangler.

A custom-built axial flux electric motor can operate up to 6,000rpm, capable of moving the Jeep from 0-60mph in 6.8 seconds. The Magneto is powered by four lithium-ion battery packs. It is also equipped with a JPP 2.0-inch lift, 17-inch wheels, 35-inch tyres and a wide range of off-road armour. 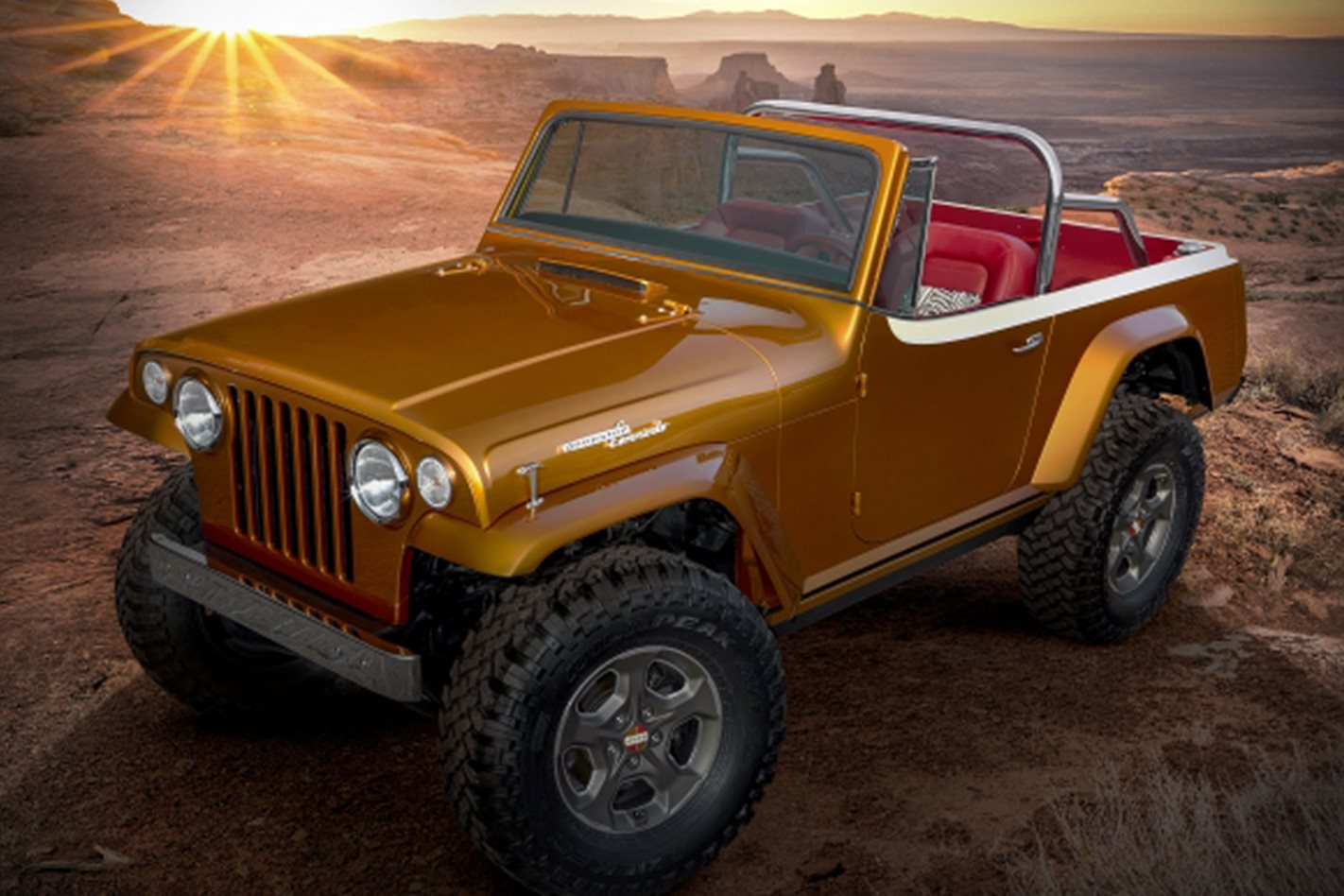 Jeepster Beach is a nod at the ever-popular resto-mod scene, and is a throwback to the second generation Jeepster. It started out as a 1968 Jeepster Commando (C-101) and has been blended with a 2020 Wrangler Rubicon to bring it up to speed.

Speaking of modern, it’s powered by a 2.0L turbocharged four-cylinder motor which has been tweaked to increase output by 25 per cent to 340 horsepower (253kW). 4.1 ratio transfer gearing helps turn the 35-inch tyres, and a custom red interior (with chrome roll cage) really sends the resto-mod image home. 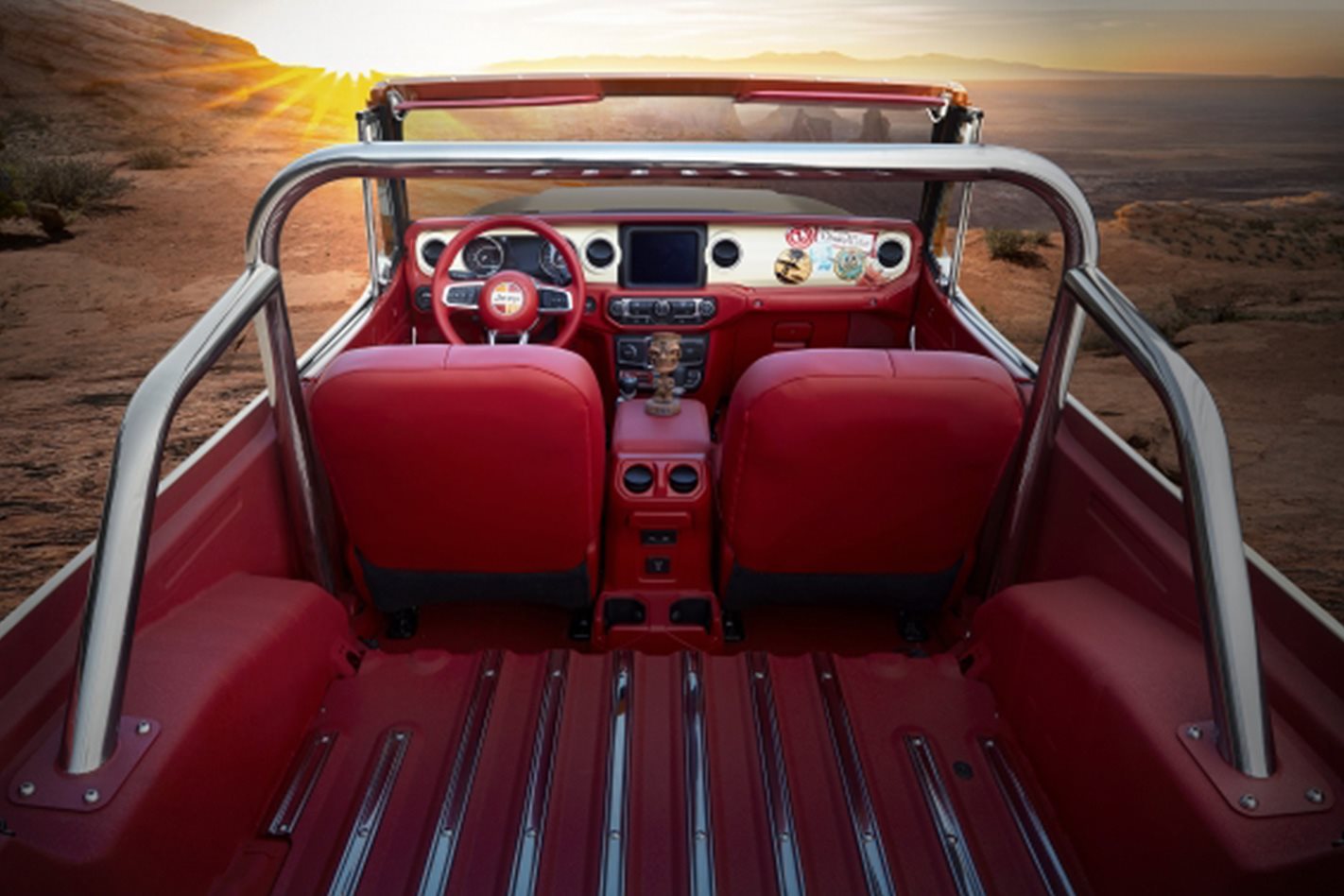 Next up is the Jeep Red Bare, designed to be a combination of hard-working ute and capable off-roader. It’s powered by a 3.0-litre EcoDiesel V6 engine, with 8-speed automatic transmission.

The concept features front-and-rear Dana 44 axles, which have been upgraded with 4.88 ratios for greater performance.

It also has a very impressive 91:1 crawl ratio, making this a serious workhorse, yet with all the fun features of a Wrangler including half doors and a black soft top for that familiar open-air experience. 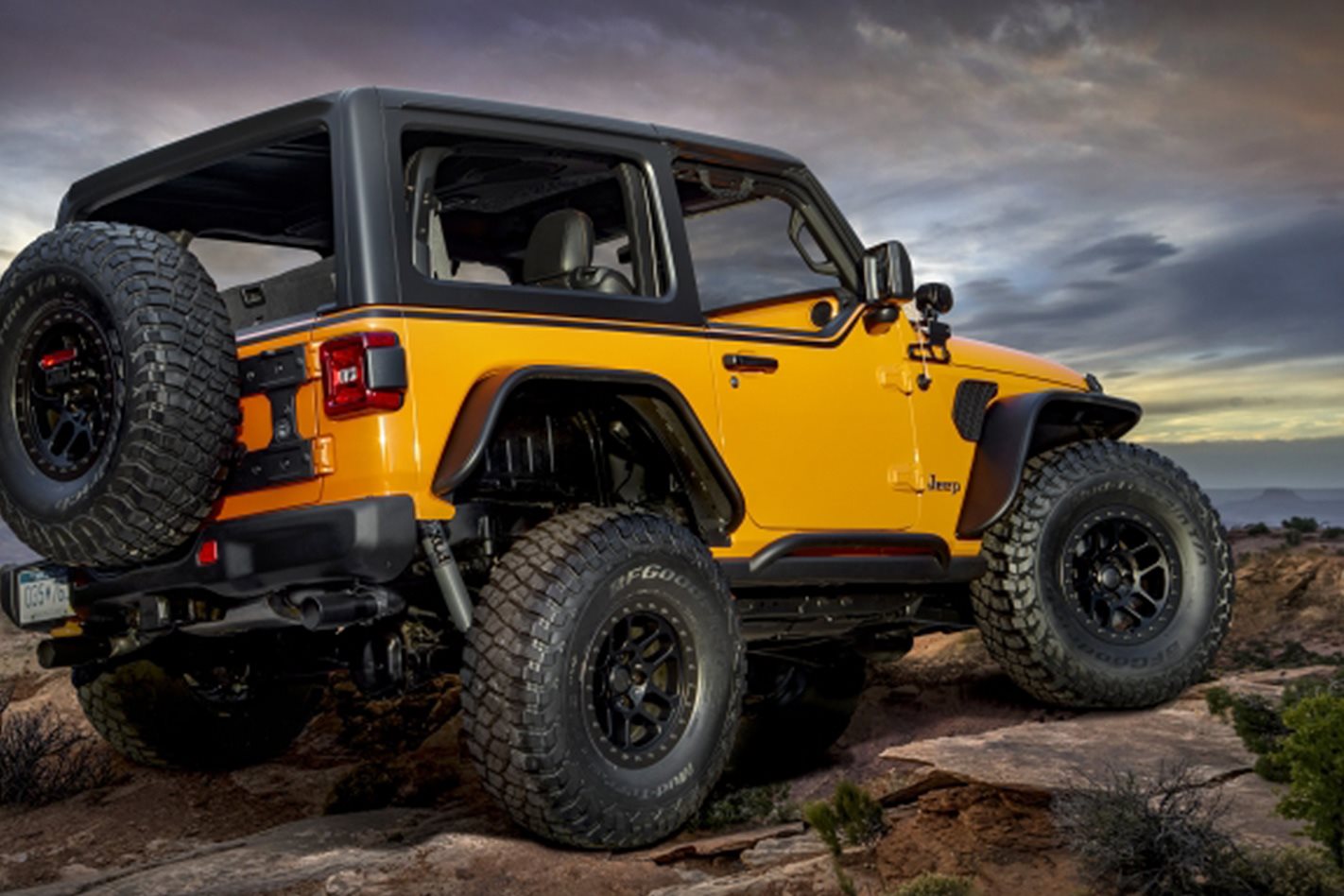 Jeep Orange Peelz is all about fun. Riding high on 37-inch tyres, it’s the one you’d pick for a play in the rocks. Powered by the 3.6L Pentastar V6, performance has been tweaked with the addition of a JPP cold-air intake and cat-back exhaust system.

A JPP swing Gate Hinge Reinforcement allows the larger spare tyre to fit, as well as body coloured tow hooks to pull out lesser vehicles on the tracks. Side and rear windows have been removed, with prototype JPP half doors and a custom removable one-piece Freedom Top glass sunroof completing the package.

Jeep Farout is the overlander of the group, based on the Gladiator platform powered by a 3.0L EcoDiesel V6. The standout feature here, is a customised AT Overland Equipment Habitat Truck Topper, a 16-foot-long and 7.5-foot-tall camper that sets up in just seconds, and sleeps four people. It also rides on 37-inch tyres, with Fox performance shocks for amazing ride quality and an integrated roof-rack system for additional storage.

Jeep Wrangler Rubicon 392 needs no introduction, as this is the V8-powered Rubicon we all want to drive. Powered by a 6.4L V8 engine, which makes a screaming 485 horsepower (361kW) with most power available just above idle where you want it.

A dual-mode performance exhaust furth adds to the ridiculousness, switching between wild and outrageous. 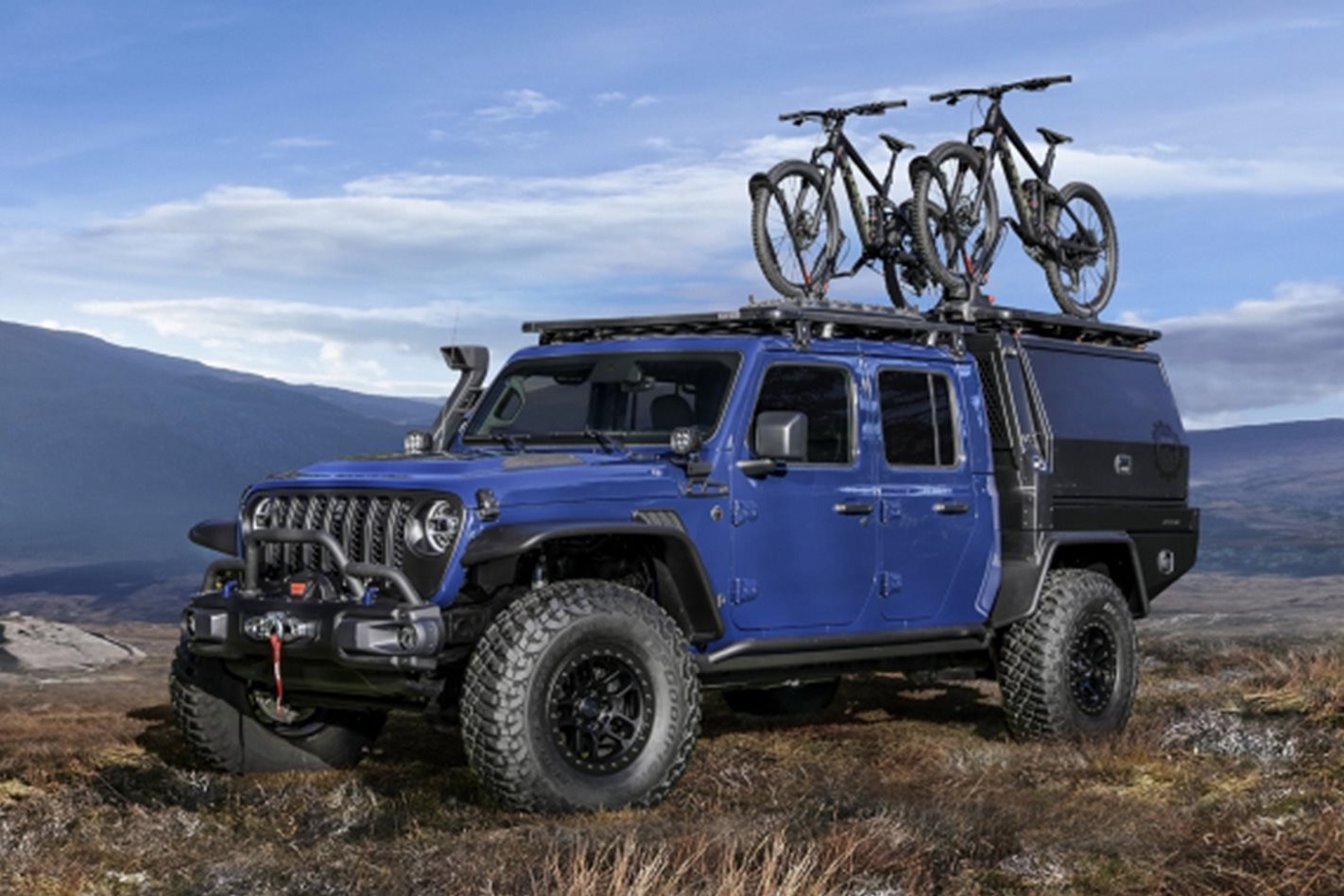 Jeep Top Dog has been designed primarily with mountain bikers in mind, and has been decked out extensively with additional cargo capacity with the use of a custom (and Aussie-made) PCOR flatbed storage system.

There’s pull-out drawers, a battery-powered refrigerator and even an electric hot dog roller grill stand for when you get hungry out on the tracks.

We are certainly excited by this range of Jeeps, and are looking forward to seeing which concepts become a reality in Australia in the coming years. 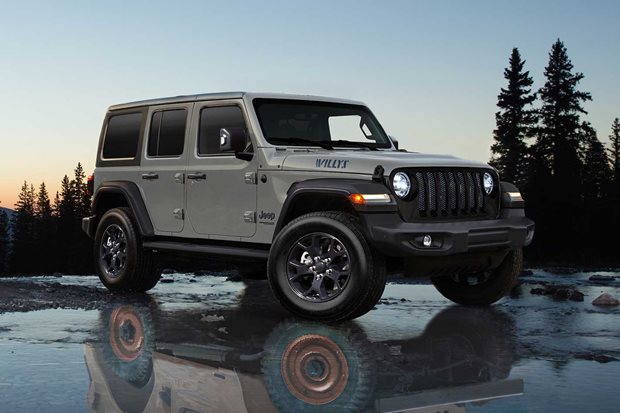 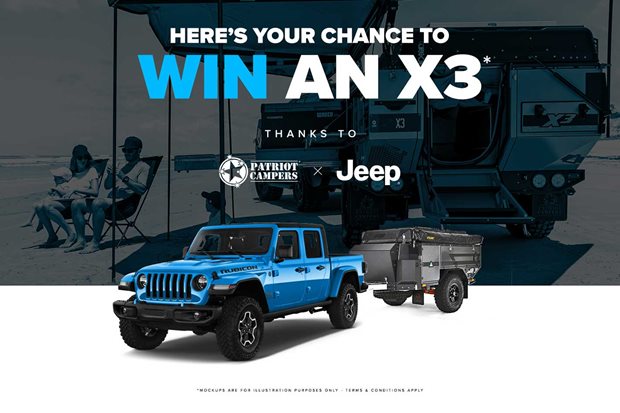 Swipe your credit card at a Jeep Dealership and you could win a Patriot X3 camper trailer.