THEY reckon more people have walked on the moon than folks have gone over 400mph on land. I’m not sure ‘they’ are correct about that, but either way, 400+mph land speed runs are extraordinary achivements.

They have potential for great danger, too. Last September, Rob Freyvogel suffered terrible injuries behind the wheel of his Carbinite LSR. While chasing his goal of being the first piston-powered vehicle to top 500mph, Freyvogel crashed at around 400mph. The incident left Freyvogel in a coma, but he’s now at home and recovering slowly.

And in August, Jessi Combs was killed when her jet-car crashed at over 400mph on a dry lake bed in Oregon’s Alvord Desert.

Nevertheless the chase for speed goes on. This week, 71-year old George Poteet set a new record for the world’s fastest piston-powered vehicle, with a 470.016mph (756km/h) average during the Southern California Timing Association (SCTA) Speed Week on the Bonneville salt flats in Utah. 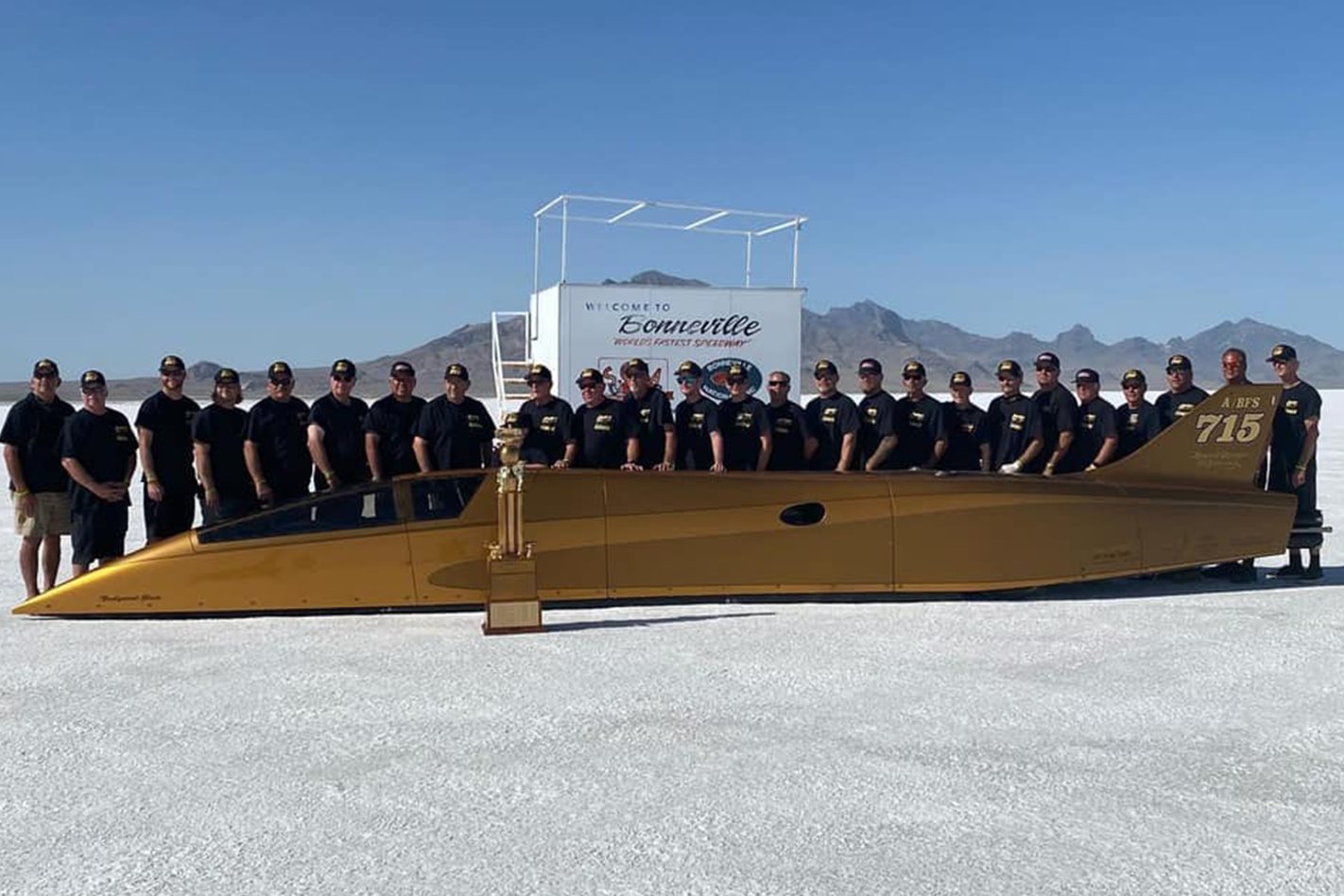 The previous record holder was Danny Thompson, to the tune of 448.75mph in 2018. He did it in the Challenger II streamliner, powered by a pair of 500ci, nitro-burning Hemis. In doing so, Thompson finished the job started by his father Mickey in 1968.

Thompson himself had taken the record from Poteet - one set it in 2012 with a 439.56mph average, running 368-cube small-block Duttweiler Chev. That year, the Speed Demon team ran more than 30 passes at over 400mph!

The overall piston-powered record is just one part of the achievements of the crew. They also dominate the SCTA list of Blown Fuel Streamliner records. By running a variety of engines, including small block Chev, LS-based, flathead and four-cylinder, the team owns seven records.

Poteet and co have also claimed the annual Hot Rod trophy for the fastest car at Speed Week many times and did so again in 2020, thanks to an exit speed of 481.5mph. 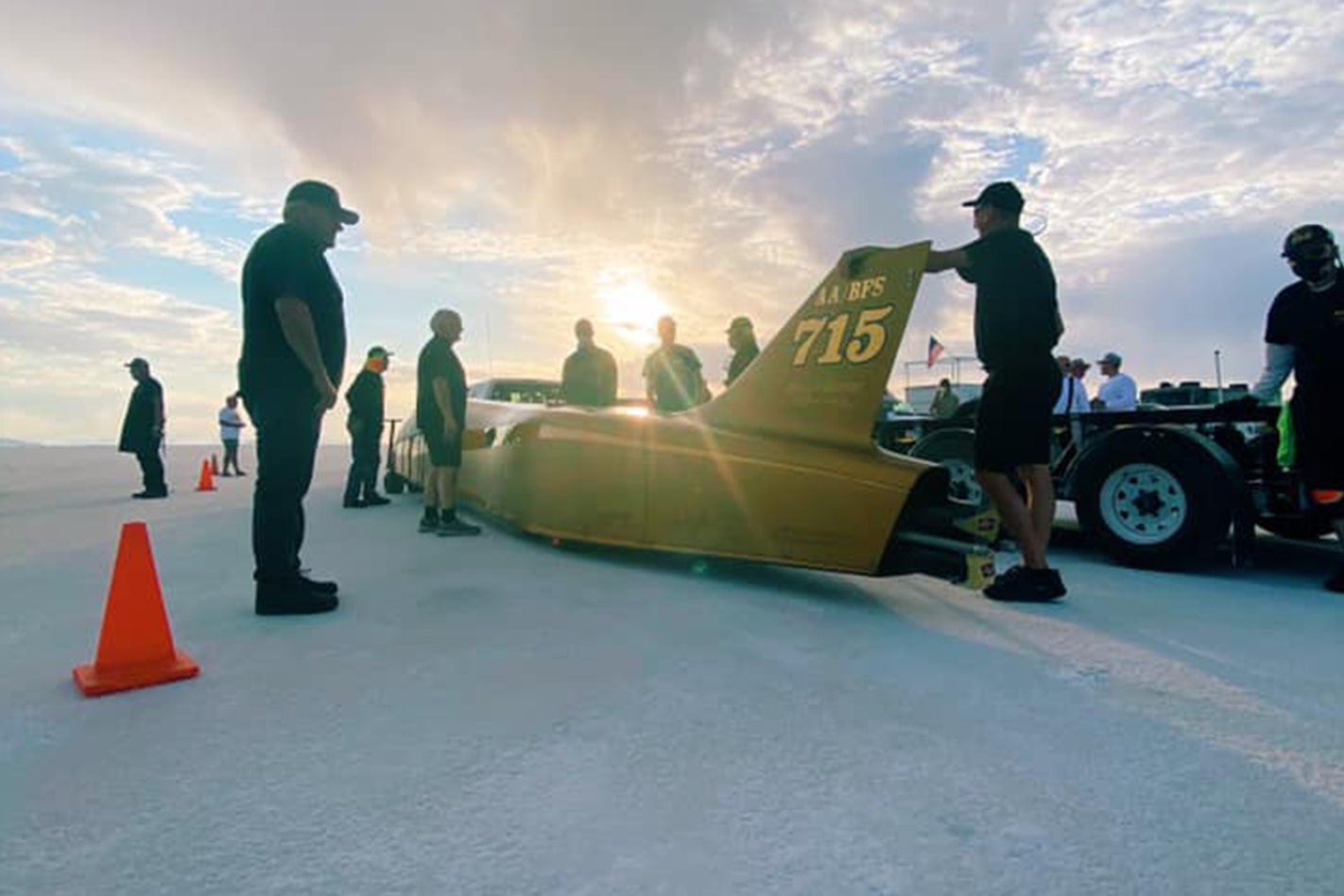 This year's 470mph average runs gave the team the AA/BFS record, which was held since 2004 by Tom Burkland's AWD Streamliner, powered by twin blown Hemis. With that long-standing goal achieved, the Speed Demon team swapped out the 555-cuber for a 256-cube small block, in the hope of adding the E/BFS record to their tally. A internal gremlin put a stop to that, for now.

We're hoping to do a deep-dive into the Speed Demon's 555ci mill in the future, but in brief it is based on a Dart Big M Mark IV iron block, a Comp Cams Top Fuel cam with a 4/7 firing order swap and Dart PR01 20-degree heads, chosen (amongst other reasons) to help the rat motor fit inside Speed Demon's tight confines. The turbos are Precision GEN2.2 Pro Mod 88s, with a modular liquid/air intercooler. The ECU is an Aussie MoTeC M150, tuned by Shane Tecklenberg. The combo makes 3156hp on 35psi with 17-degrees of ignition advance. 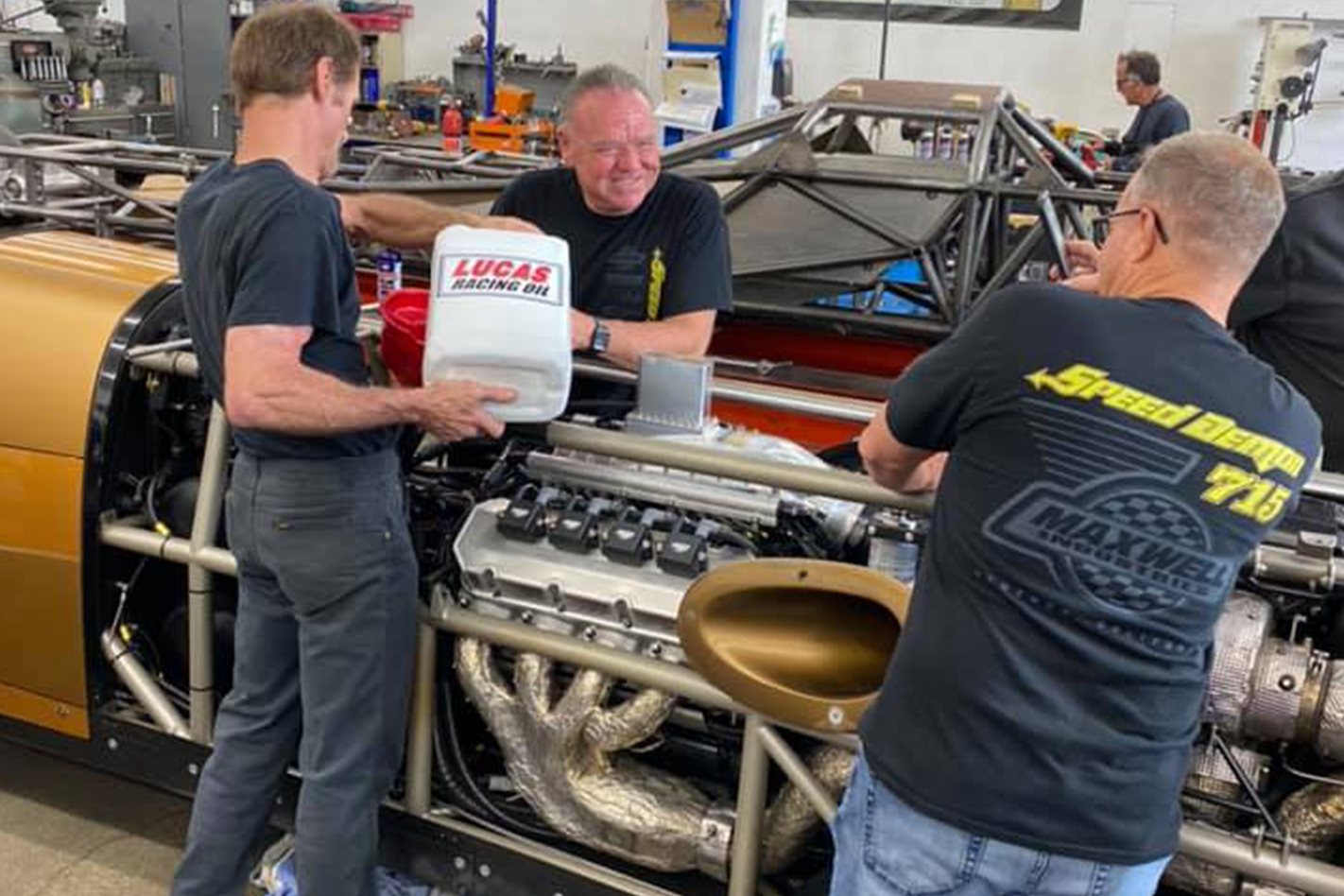 Poteet started his salt racing career with a flathead-powered roadster. That car never topped 120mph, but it set him the course to set a record at over 200mph and join the 200mph club.

The hunger for speed led to the creation of Blowfish, the chopped ’69 Plymouth Barracuda built by Troy Trepanier in 2006. Blowfish set a number of records in Blown Fuel Competition Coupe and ran over 300mph.

Poteet also partnered with Ron Main on Ron’s Flatfire – the first flathead powered car to top 300mph. Poteet supplied the engine for subsequent iterations of the car that turned into the first Speed Demon.

Poteet rolled this version of the Speed Demon at 380mph in 2014 and came away without a scratch. 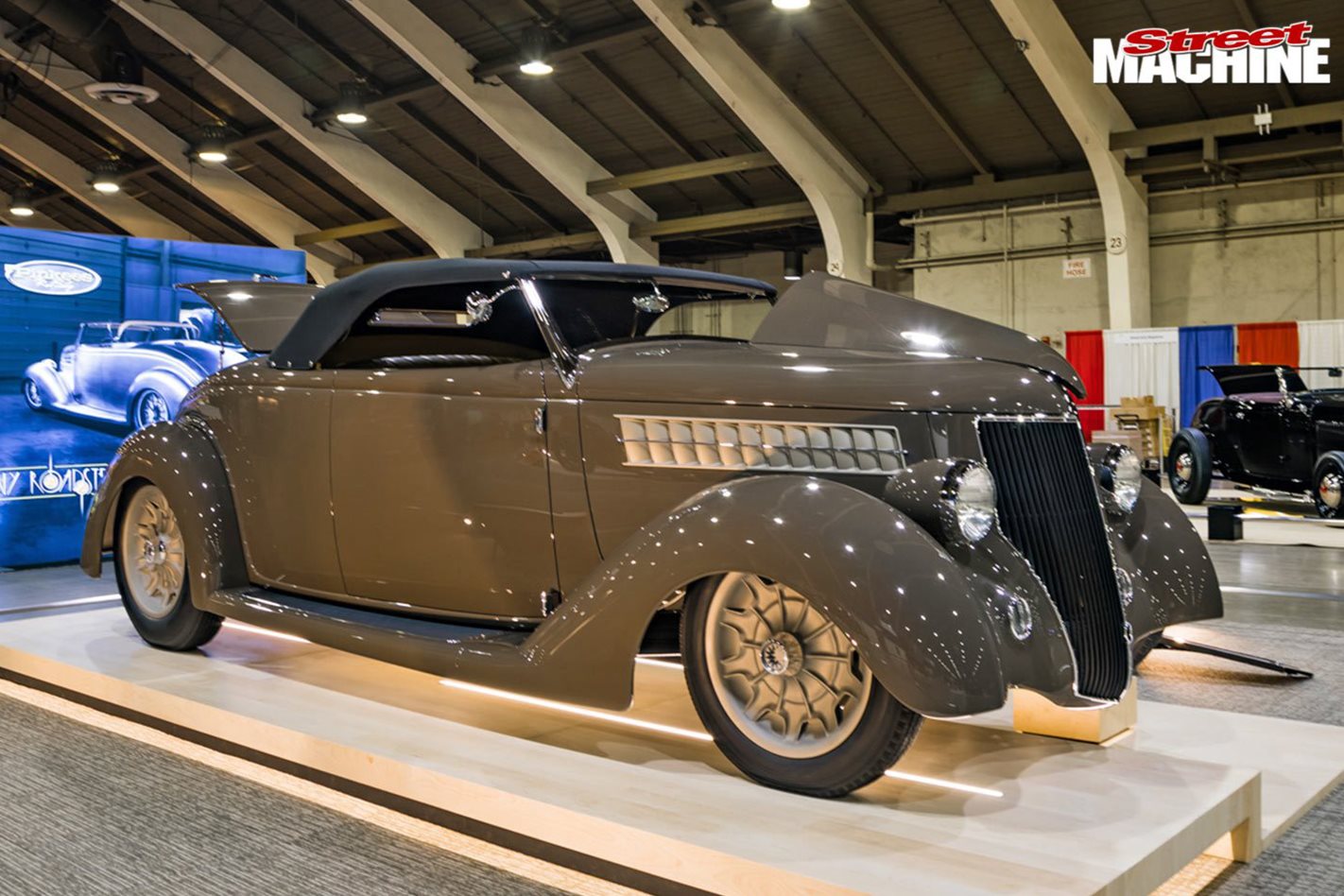 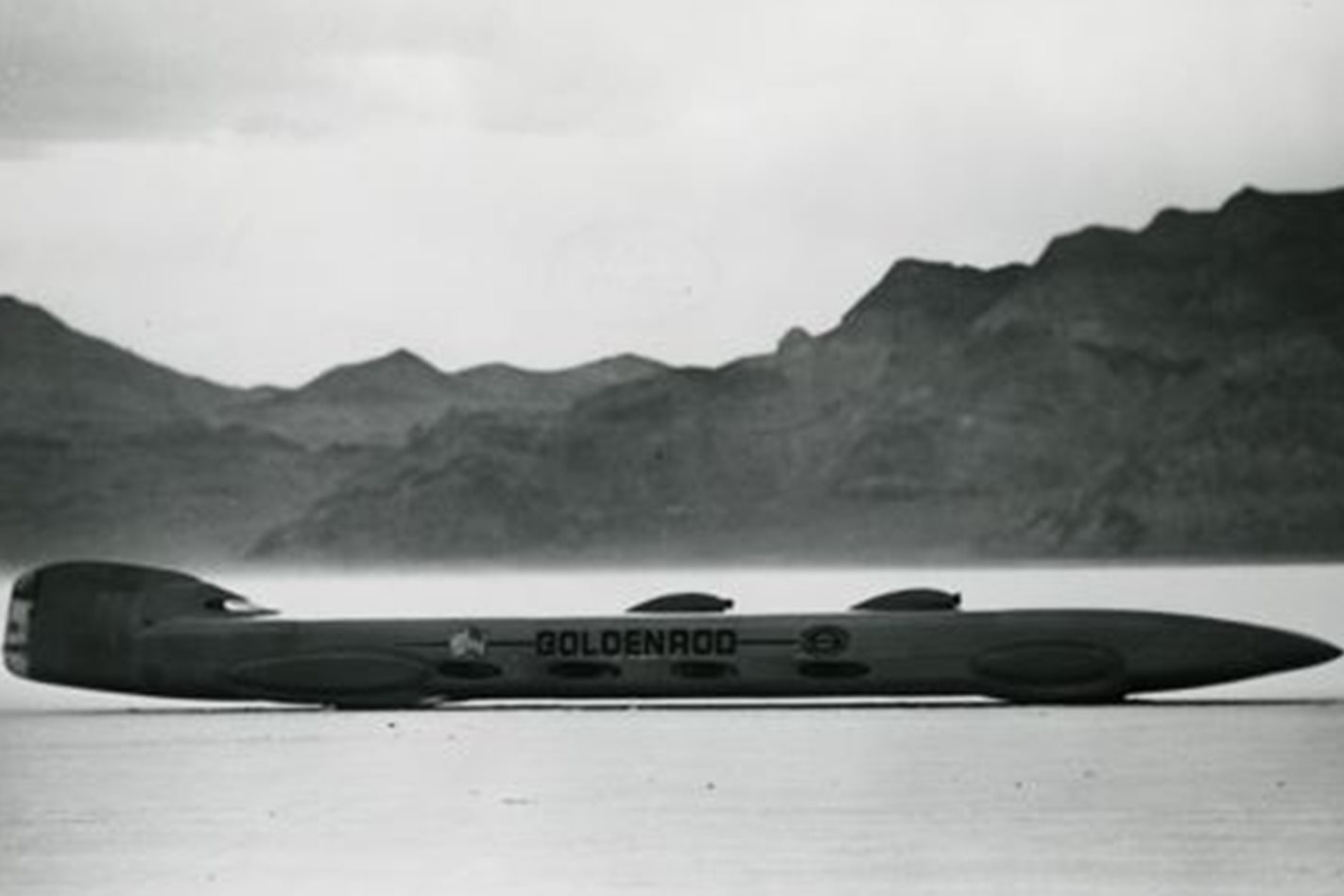 It is staggering to look back at the history of the folks who have chased 400+mph in wheel-driven cars. Pom John Cobb was the first man to break the barrier, with a 403mph one-way run at Bonneville in 1947. He set a world new record of 394mph, but was unable to back up the 403mph pass.

That was left to Donald Campbell, who set a record of 403.10mph on Australia's Lake Eyre in 1964 in the turbine-powered Bluebird. His record was soon broken by the Summers Brothers in their Goldenrod (pictured above), using four fuel-injected Hemi V8s to set the new mark of 409mph.

While thrust-powered vehicles have broken the sound barrier, piston and turbine-powered streamliners have battled their way through new 400+mph records ever since, including the likes of those campaigned by Nolan While, Al Teague, Don Vesko and Tom Burkland.

It may seem crazy that it has taken 73 years of on-and-off competition to get to the point where the 500mph mark for a piston-powered, wheel-driven vehicle may now be within reach, but such is the nature of this endeavour. Land Speed Racing is one of the last bastions of amateur motorsport, where hot rodders like Poteet can still make history.

You can stay up to date with the Speed Demon team on their Facebook page.