YOU read that right, Larry Larson’s twin-turbo 1998 Chev S-10 has just run a five-second pass over the quarter-mile, making it not only the fastest street car on earth but the first to break the five-second barrier.

Larson did the business at the Street Car Super Nationals in Las Vegas on the weekend, stopping the clocks at 5.950sec@244mph! The pass builds on Larson’s super-impressive list of achievements, which includes winning five Drag Week events and running both the first 200mph street pass and the first six-second ET in a street car – all in his ’66 Chevy Nova.

STREET CAR?
But is the S-10 a street car? You bet your sweet bippy! While it would have Buckley’s chance of getting street rego in Oz, the USA’s more relaxed attitude to modifications means this weapon is totally fine for street driving.

The car was built by Larson to compete in the Unlimited Class at Hot Rod Drag Week, which is essentially for Pro Mod-style cars that have been built to complete that event’s gruelling 1000-mile road course.

The event runs over five days on some of the most uncivilised backroads you would find anywhere in the world, not to mention the crazy weather conditions, ranging from over 40°C one day to under 10°C the next. Just doing the drive alone in any kind of modified vehicle is an accomplishment!

TRANSFORMER
The car is a work of art and has had an enormous amount of thought put into it. The cab and tray-sides are factory steel, with the doors (in race spec) and one-piece front end made from Kevlar panelling. For road driving Larry runs a set of steel doors that are fitted with wind-down windows and side mirrors. For racing, he pulls the Kevlar race doors out of the tow-along trailer and drops them on.

All plumbing is done with quick-release fittings, so all cooling accessories, like the radiator, water pump and hoses, can be removed in seconds to go racing. Every piece of the car has been designed and fitted in the most practical and easy-to-work-on configuration possible, being mindful of strength, weight and performance.

The truck runs on pump fuel on the street and converts to methanol at the track. To enable this, it has two fuel systems, using Aeromotive in-tank electric pumps for the street and a belt-driven pump on the track. The decision to run methanol was all about weight-saving, as it meant that an intercooler wasn’t going to be necessary.

Once the doors are swapped and all of the superfluous street parts are removed – including the radiator, the street fuel tank and side-pipe exhaust system – the S-10 comes in at 2800lb (1270kg) race weight.

POWERHOUSE
Unlike all his previous cars, which were powered by Mike Moran combinations, the new full-tube-chassis S-10 is fitted with a Pro Line big-block Chevy.

The engine is 620ci with the latest Brodix PB500 block and heads, and the block is punched out to 4.670 with a 4.5in-stroke Callies crank and GRP rods. Pistons are Diamond with Total Seal rings, Victory valves, Pac springs and Smith pushrods. Static compression is 10.25:1, and while he’s tight-lipped on the specifications of the tooled steel Crane cam, Larson says it only has 800thou lift.

The valvetrain is all Jesel equipment, including belt drive, lifters, rockers and distributor. The Hogan intake manifold is fitted with a set of Precision 225lb and 550lb injectors.

The oiling system is as serious as the rest of the car, with a Peterson belt-driven pump and a six-stage, dry sump set-up. A pair of 105mm Acufab throttlebodies distributes the boost from the twin Precision Gen II 98mm turbochargers and 66mm wastegates. Ignition is an MSD 8+ with a Powergrid, and the ECU is a Fueltech FT500.

THE TRANS
Instead of the five-speed Lenco Larson ran in previous years, this time, he went for a Rossler three-speed TH400 with ProTorque converter. For road use, the Chev runs a transmission cooler, which is bypassed and removed come race time. The four-link rear end has all the usual bulletproof components, including a Strange Pro Mod-style bolt-through Ultra Case swinging 3.89:1 pro gears and Hoosier 34x17 sneakers.

The final piece of the road versus race puzzle is a Gear Vendors overdrive unit, which allows Larry to cruise at 65mph at 2200rpm.

Check out the truck in action at Drag Week here: YouTube.com 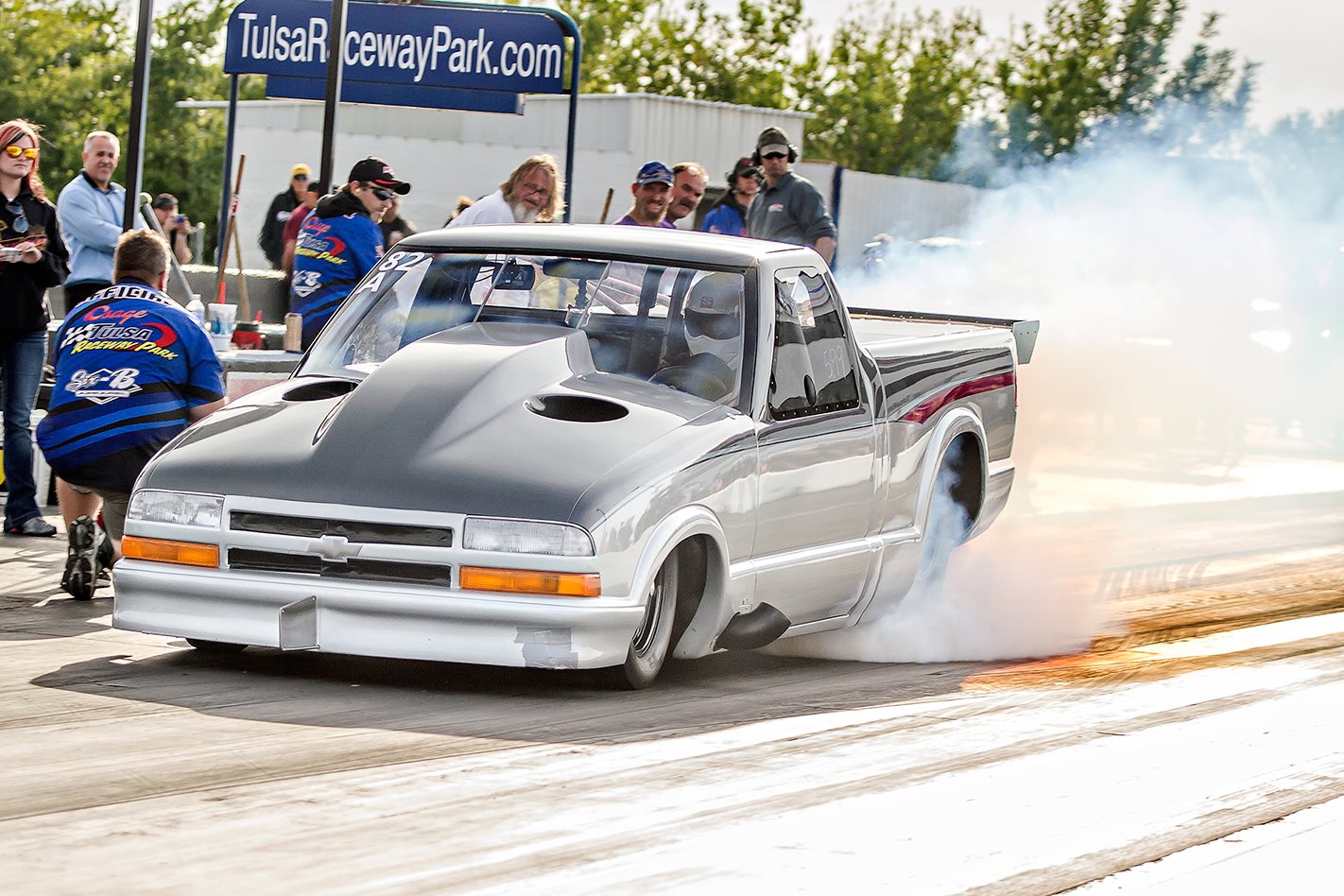 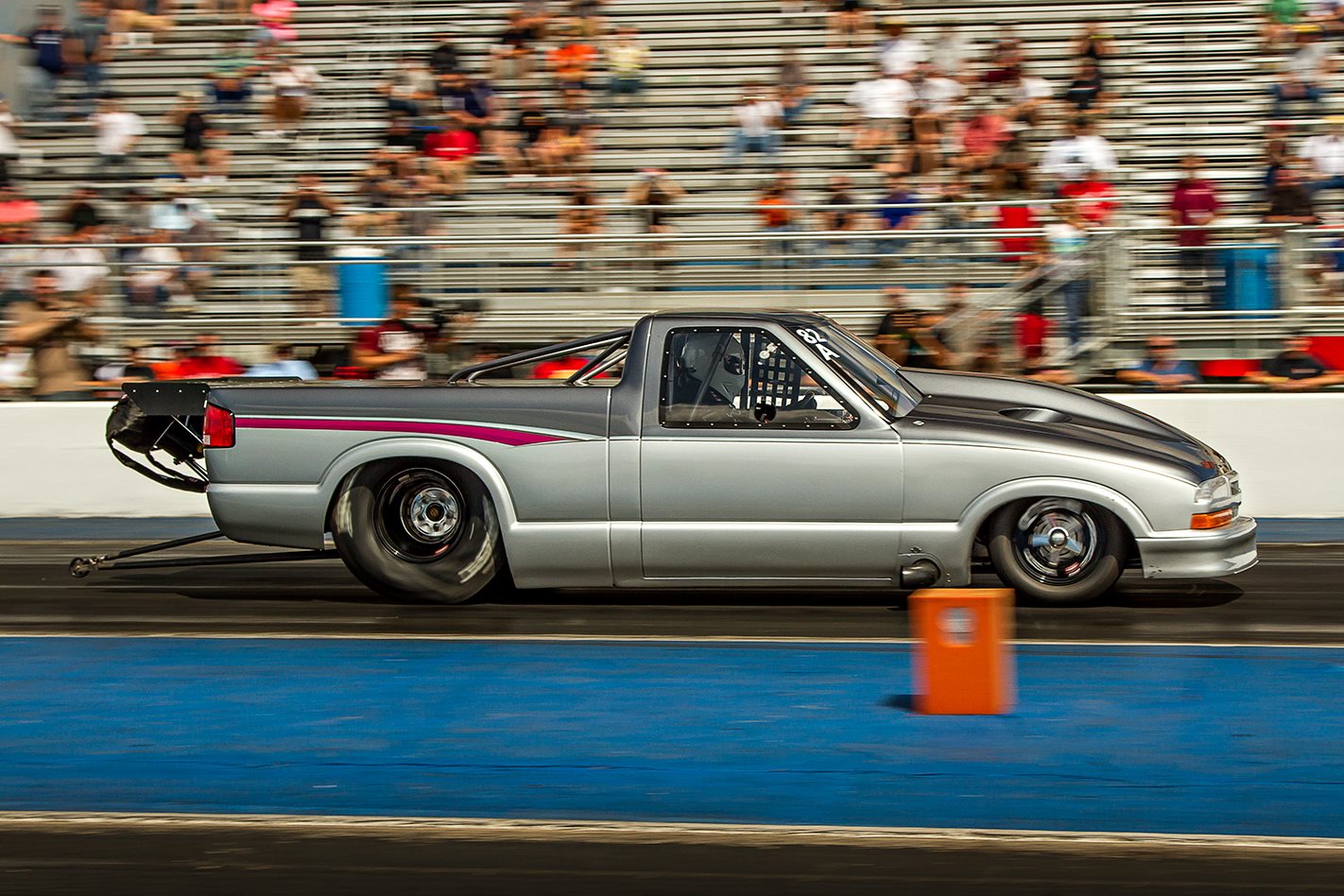 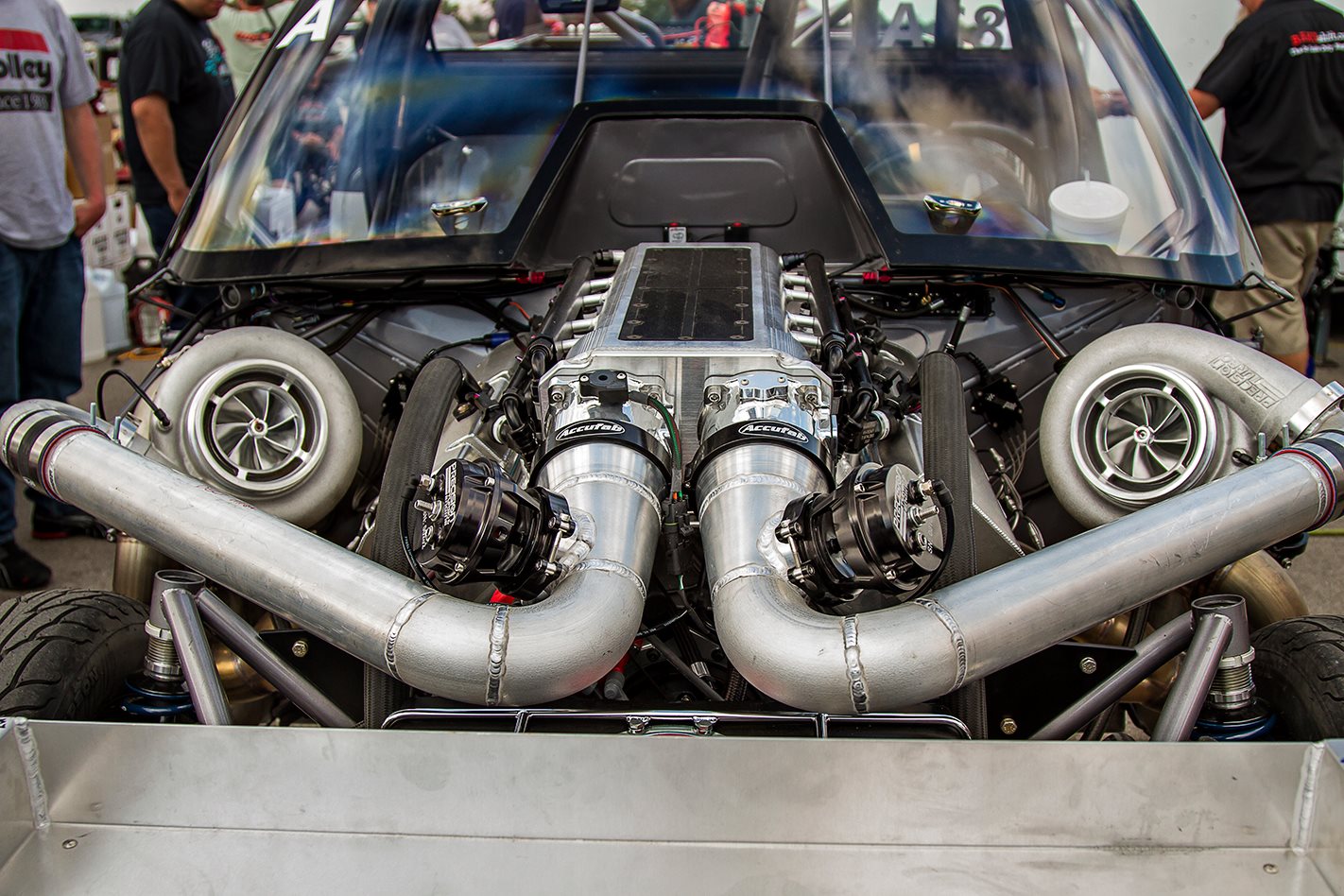 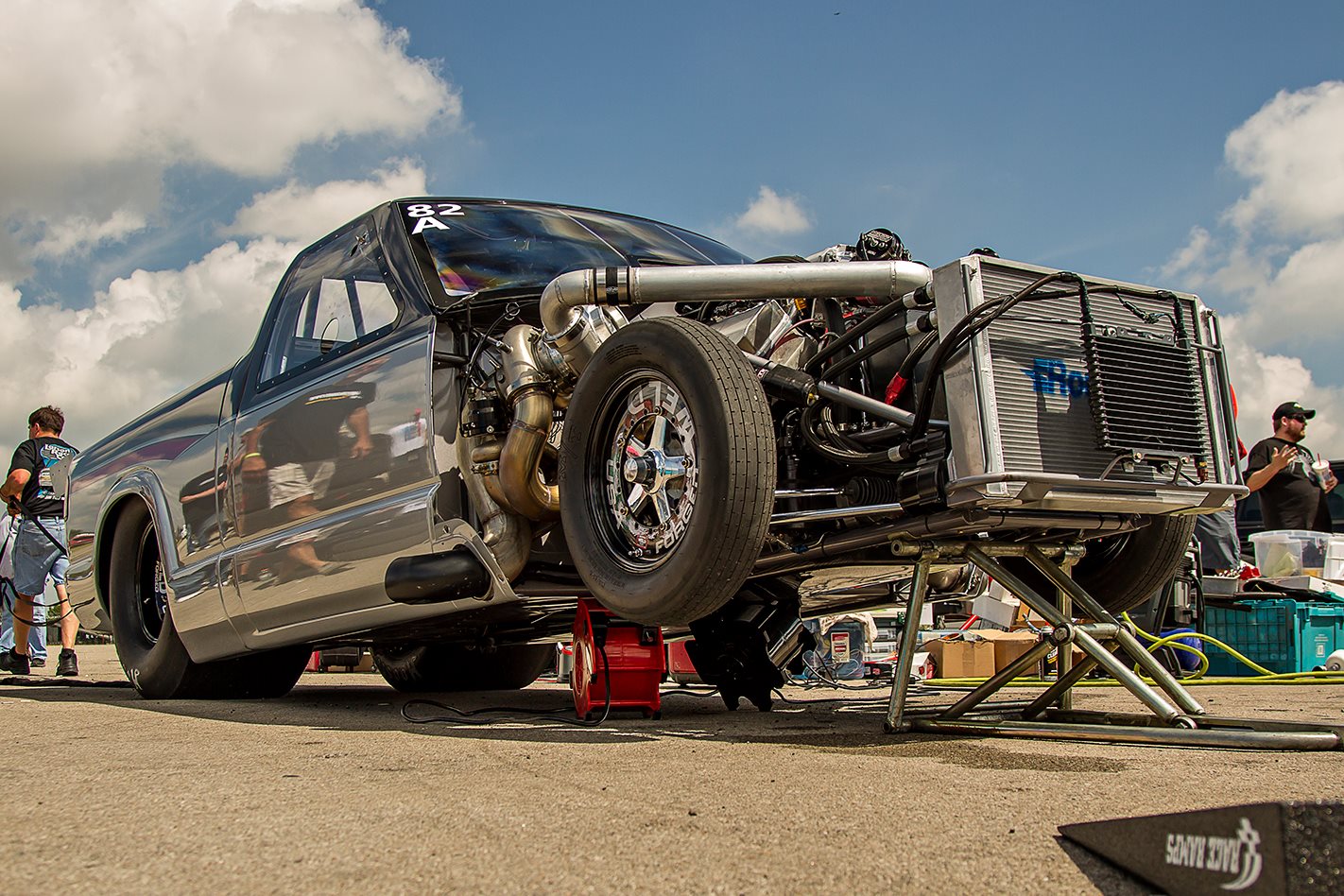 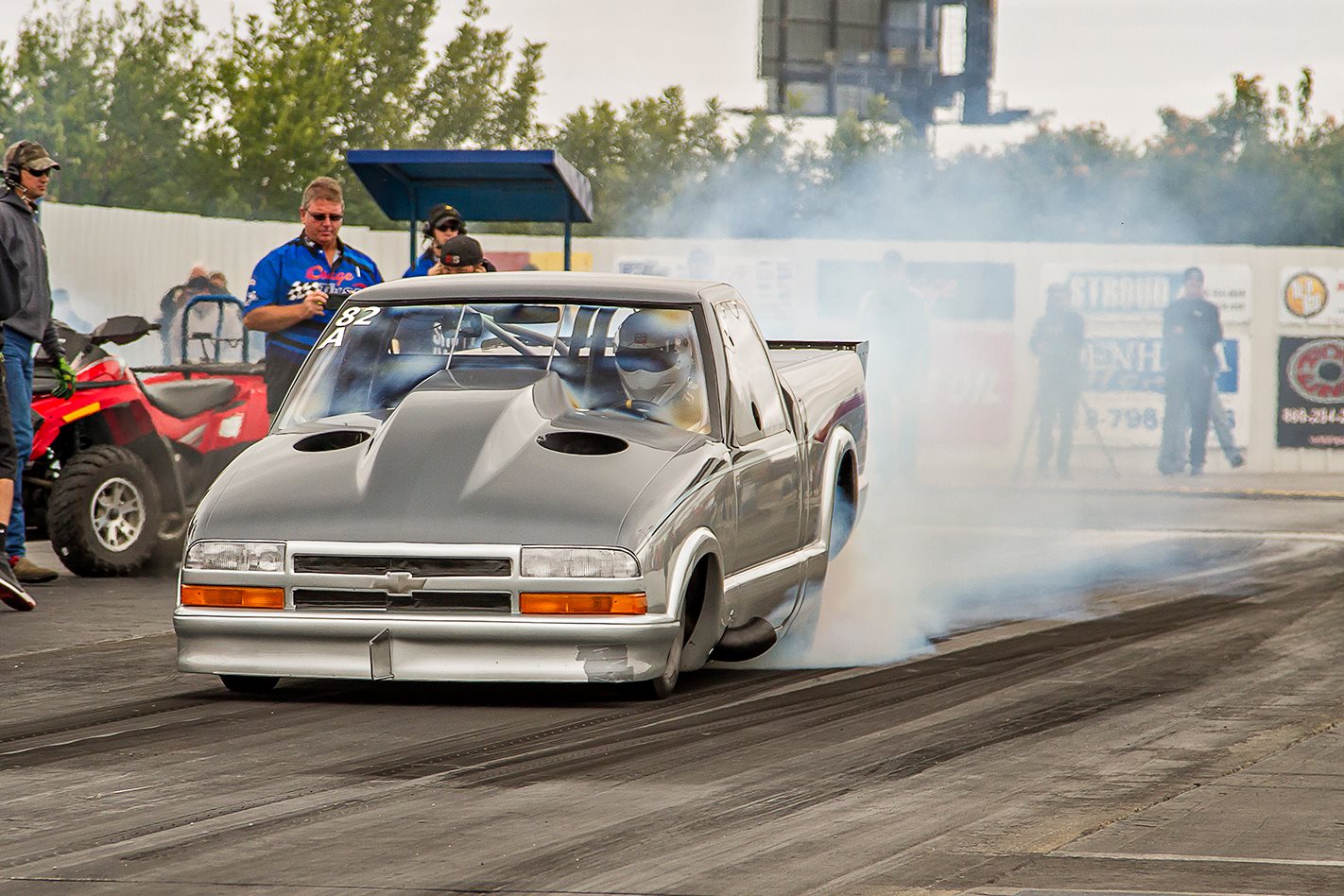 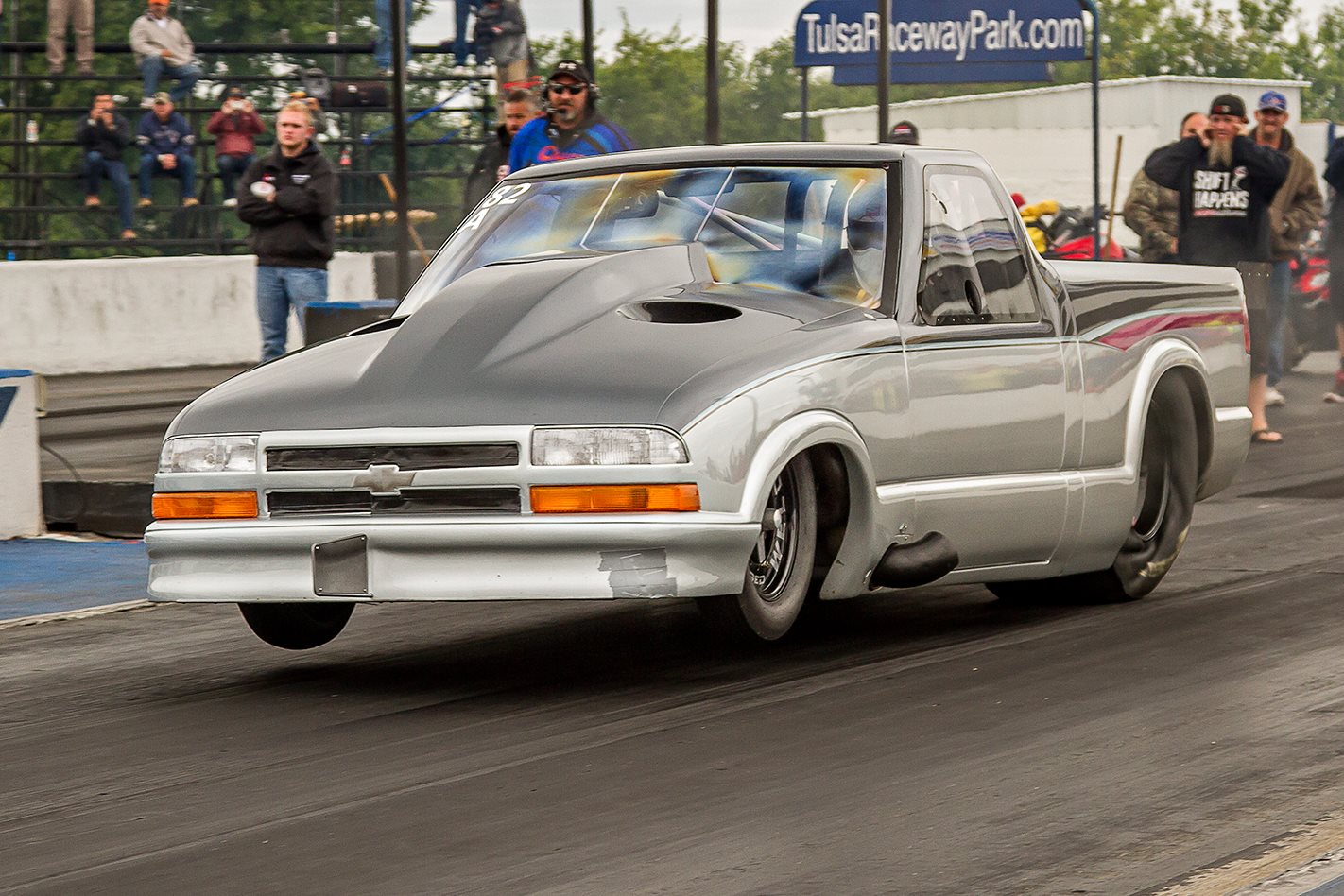 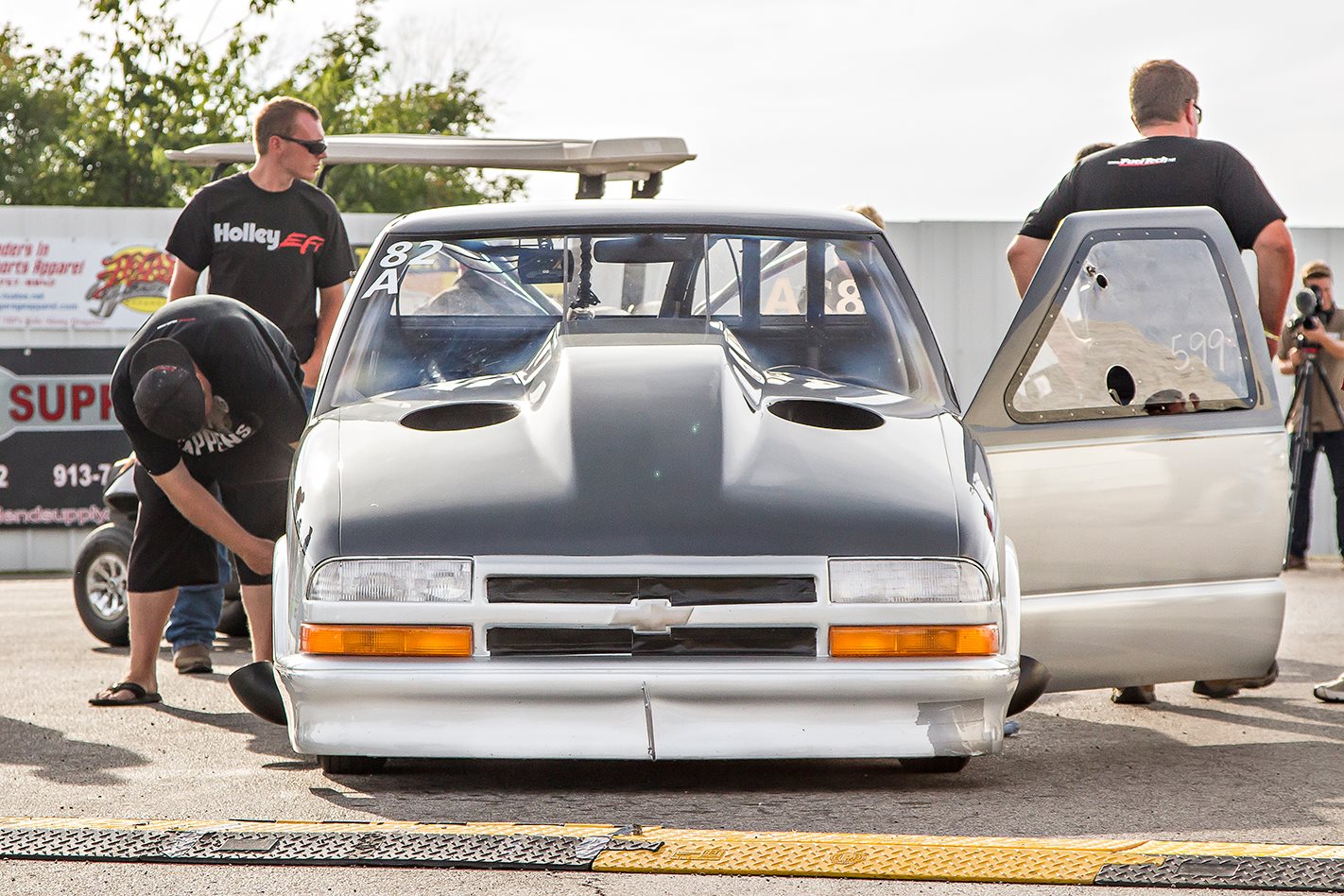