SADLY, the curtain came down on legendary US engine builder Sonny Leonard on 10 January. The quietly spoken Sonny, from Lynchburg, Virginia, became internationally famous when Bill Kuhlmann bought one of his 615-cube mountain motor kits in 1987 and became the first Doorslammer racer in the world to break 200mph.

I met Sonny in his old shop when Street Machine founder Geoff Paradise sent me to the USA to crew for Kuhlmann in 1989. At the time, Sonny was building engines for some of the best racers in America. While I was there, a 707ci motor destined for legendary racer Ronnie Sox’s Pro Mod Comet was ready for pick-up. Sonny also showed me the dyno sheets for Rickie Smith’s Pro Stock engine, as well as other Pro Stock racers he was building engines for – the dyno figures were almost identical. The reason why Rickie won was not a horsepower advantage, as some of Sonny’s customers thought; he was simply a savvy racer who knew how to set up his clutch and suspension better.

There are more than 70 national and world records plus many trophies sitting on racers’ mantelpieces thanks to Sonny’s engines. The biggest Sonny’s Automotive Racing engine is 1005ci and can make 2250hp naturally aspirated – enough power to put a 2350lb Doorslammer into the high fives.

He was always thinking outside the box. When the blocks ran out of cylinder wall and the cam got in the way of the rods, he designed a new block with a raised cam and had it cast. I remember in 2014 Sonny proudly showing me the hemi heads he designed and made. 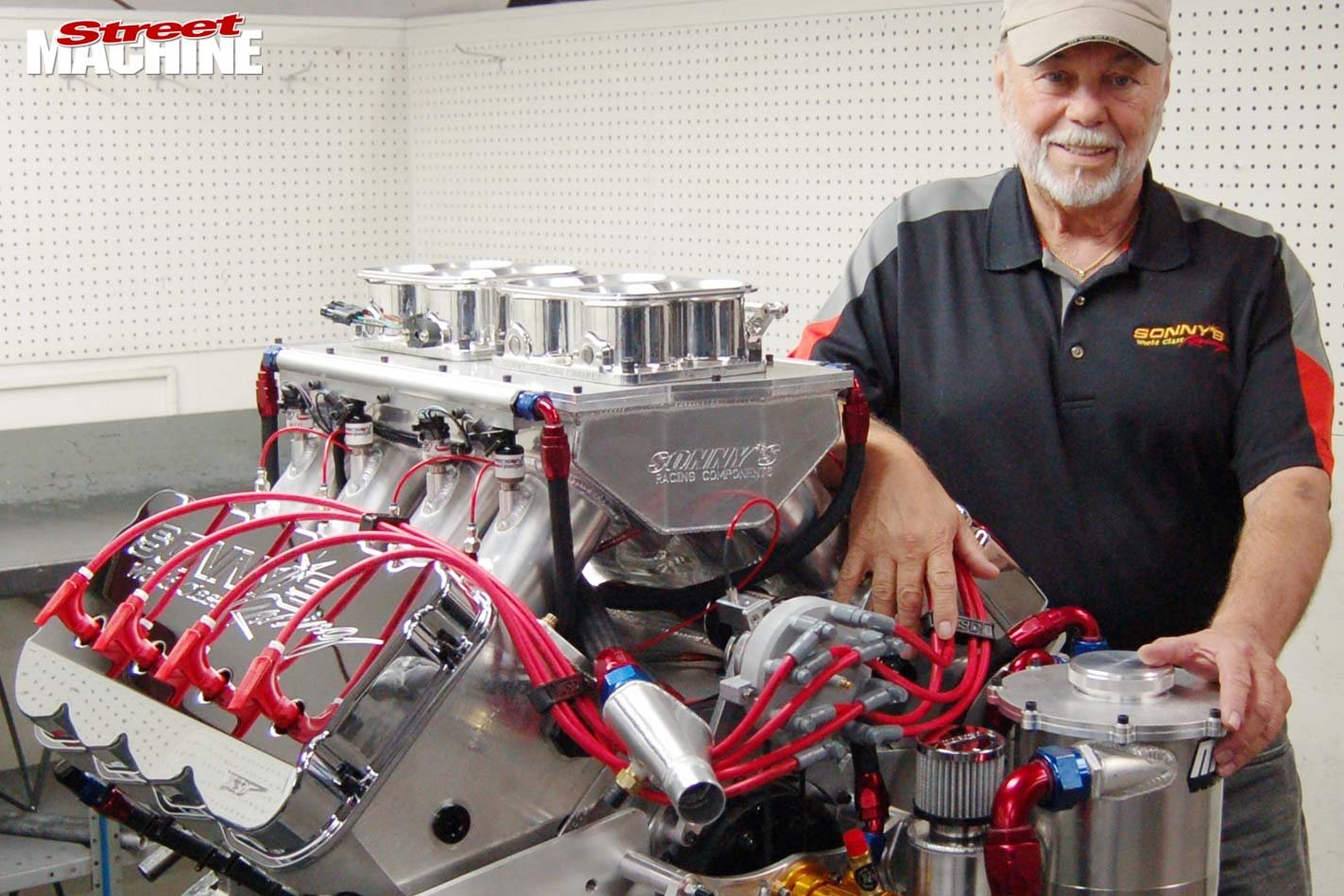 Sonny’s engines haven’t just been used for drag racing; they’ve found their way into all kinds of motorsports including offshore powerboat racing and tractor pulls. Sonny loved travelling to watch his customers break records and pick up trophies.

Several of the guys in the shop have worked there for years. Sonny took them from parts washing to porting heads, machining, meticulous engine assembly and dynoing. The dedicated crew go the extra mile and work around the clock for customers who need a quick freshen-up for a big event.

There’s another side to Sonny, and the reason why he was loved by everyone who came in contact with him. One time we were in a restaurant, and he tipped the waitress $10. Before leaving, Sonny asked her what she did. The waitress replied she was putting herself through college and working three jobs. In his southern drawl, he asked for his $10 tip back! The young lady handed back the $10 and nearly burst into tears when Sonny replaced it with a $100 bill. That’s the sort of guy he was.

We also went around to the aged care homes. Sonny had these rings that lit up and flowers he would give to the residents. Many of these elderly people didn’t get any visitors, and Sonny brought so much joy to their faces. He was like a saint to them. Sonny loved to make people happy.

To Sonny’s family, the crew at Sonny’s Automotive Racing, his friends and all the racers around the world, Street Machine would like to offer our sincere condolences.