VOLKSWAGEN has let slip that a Toyota Fortuner-rivalling, seven-seat SUV based on the Amarok is definitely on the carmaker’s development table.

Under intense scrutiny over why Volkswagen Commercial, the commercial vehicle arm of Volkswagen Group, chose not to add head-protecting side curtain airbags as part of a major makeover for the Amarok ute due in Australia late this year, a spokesman told 4X4 Australia that they would need to be engineered in for the next generation “for the seven-seat”.

“It [rear-curtain airbags] is under consideration for this generation,” the spokesman said. Asked if the head-protecting rear airbags would definitely be part of the second-generation Amarok due around 2019, he said: “We will have to have it for this [Amarok] and for the seven-seat.”

It’s the closest we have come to confirmation that Volkswagen is considering the niche seven-seat off-roader as part of its future product development. It won’t need to be a big-volume seller for the commercial division of VW, either, with Amarok designer Albert-Johann Kirzinger indicating that an Amarok-based SUV would only need to attract a small number of sales – about 1000 a year – to make it viable.

“When we look at a niche in the commercial vehicles, we’re looking at numbers that are lower than one per cent [of total sales],” he said.

Adding weight to the seven-seat Amarok’s development is a shift to a 3.0-litre V6 turbo-diesel engine for the ute, which will help to move the heavier kerb mass of a wagon-based Amarok via a more versatile spread of torque than the current twin-turbo 2.0-litre engine.

Australia is the second largest market for the Amarok outside South America, with VW keen to maintain a foothold here even as mining companies step up their safety standards to mandate side curtain airbags on all vehicles used on worksites. The Amarok currently wears a top five-star crash rating in Australia – it was the first vehicle sold here to gain the top score without side curtain airbags. Instead, it relies on a specially engineered safety cell to protect rear-seat passengers in the event of a side-on collision.

However, the seven-seat Amarok’s niche future may be over even before it starts, with the carmaker – struggling in the wake of the ‘Dieselgate’ emissions scandal – reportedly looking to cull up to 40 models from its product line-up as part of cost-saving measures. 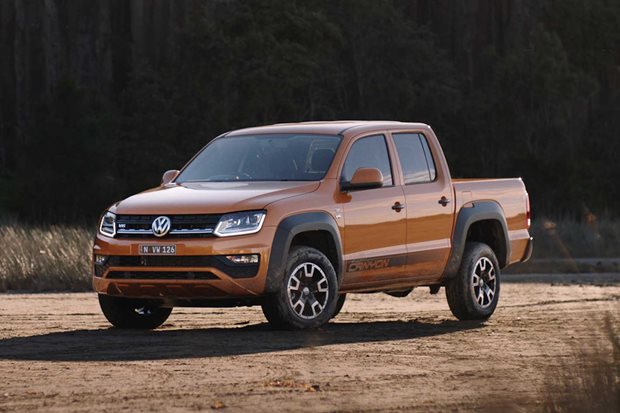