IT’S 2017 and I’m being thrown around a highly modified ‘Nissan Patrol Super Jeep’ as we traverse ice-covered rivers and deep snow at the base of Iceland’s notorious Eyjafjallajökull glacier/volcano.

This was the very same volcano that stopped the world back in 2010, disrupting Northern Hemisphere air traffic for weeks.

Despite the spectacular scenery of glaciers, deep snow and volcanoes, my mind wanders. Firstly to how the hell anyone can advertise a Nissan Patrol Super Jeep. It’s either a Nissan or a Jeep! Then to the countless other jaw-dropping places I’ve been 4WDing since the first edition of the monthly 4x4 magazine hit newsagents way back in the early 80s.

I recall the top secret SAS training track at Land Rover’s Solihul headquarters where a handful of Australian writers previewed the breakthrough Range Rover Vogue turbo-diesel in 1985. The most unforgiving track I’ve ever driven.

I remember the Toyota test track way up on the slopes of Japan’s sacred Mount Fuji in 1984. We were driving the amazing new direct-injection turbo-diesel Land Cruiser 60 Series through deep snow, before hopping on a plane for Cairns to trial it in the steaming tropics in the same 24 hours. 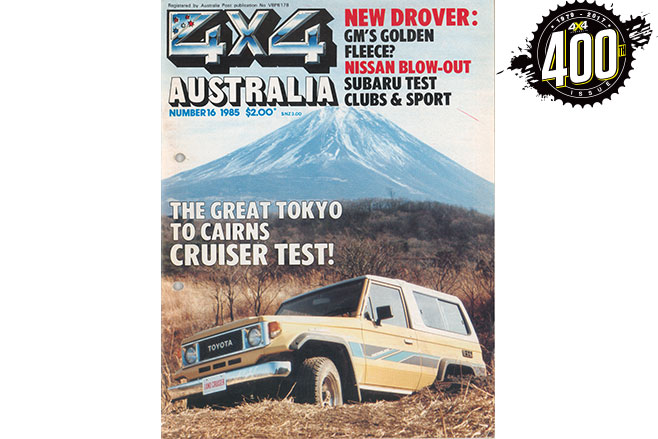 Unfortunately I also recall the face of the Japanese Toyota engineer, waiting in anticipation on the opposite side of a swollen Daintree River as I drove his beloved took into the water a little too fast. It was a cross between disbelief and failure as the vehicle died in the middle of the river.

I remember the unforgiving beaches of Robe in South Australia, the numerous east-west crossings of the Simpson Desert, the first drive of Nissan’s recreational Navara utility through Mexico, the quick sand of Tasmania’s west coast, and the 1985 season of the National Off-Road Racing Championships where I managed to convince Russian marque Lada to launch its unstoppable Niva 4x4 as an entry into class 8 with rally champion Geoff Portman at the wheel and me in the navigator’s seat. After a dozen or so rounds we won the title.

That’s the thing about this magazine. From the day we launched, it pushed and challenged us all to go further, to do more and exceed limits – of us and the vehicles. It was the beginning of the 4WD recreational explosion of the early 80s, and as a magazine we became the catalyst for people to take these new machines into the country for which they were designed.

I was just 21 when we launched and I had been filling in for a derailed trucking writer on a national newspaper. I was an investigative news reporter when one day the editor promised me a little something extra in my pay packet if I wrote the column until they found a new expert. Knowing nothing about trucks I quickly expanded it to light commercial vehicles and added a few 4WDs for the hell of it. Weeks became months and before I knew it I was attending major launches from Uluru to Lang Lang Proving Ground, learning to drive trucks and happily accepting a different 4WD to test each week.

My friends and I thought we’d found Shangri-La as we explored the Victorian High Country with the latest in 4WDs, tents, swags, fridges, snatch straps and winches. As 21-year-olds it was Christmas every week as we drove hard all day and settled beside blazing campfires at night, where our stories got bigger with every drink we had.

Then, when I heard Newspress (later Syme Magazines and then Bauer) was looking for a new editor to start a monthly recreational 4WD magazine, I dispatched a letter from the post office in Mansfield and much to my surprise a seasoned motoring writer by the name of Tim Britten saw something in me and gave me the job. To his credit, Doug Hicks had built a good quarterly mag called Off Road Action and Newspress Managing Editor Len Shaw thought it was time to cash in on the early 80s recreational 4WD boom with a monthly mag that was as much about the lifestyle as it was the vehicles.

For my part I had to learn layouts, editing, photography, managing finances, marketing, distribution and how to manage a wild bunch of writers and columnists.

In my youthful zeal I felt we had no boundaries, blending a mixture of centre-spread trek notes for weekend warriors, support for the growing club movement, coverage of off-road racing and of the growing accessories market. We ventured on 10-day desert expeditions on compass, conducted ruthless product reviews that quite often lost us advertisers, and even paid a worker on the docks to photograph new 4WDs as they arrived on our shores.

We started the 4X4 Australia Awards, called a spade a spade and watched as 4X4 Australia went from nowhere to eventually rival and sometimes better Overlander 4WD and Bushdriver in sales.

There was no online, no mobiles, no modems and no offshore printing. We took our own photos, went from final edit to news-stands in less than a week, and rode the recreational 4WD wave all the way to shore.

And in the two and half years of editing the magazine I always wondered why the hell someone was paying me to have that much fun!