THE web-based booking systems used to reserve campsites in Australia are a bloody pain.

It started in Queensland a few years ago and has now spread to all states, but thankfully not all parks and reserves have taken this system on board. The parks that utilise the web-based systems include all the parks on Cape York, the Bungle Bungle Ranges in WA, and many parks in other states.

Devised by someone who sits in an office all day and hasn’t a clue about the requirements of the travelling public, the web-based booking system requires you to plan your trip down to each and every day and night before you leave home.

This web-based system may work pretty well for people who stay a week or more at the one spot, but it’s a bloody pain for the many of us who tour and camp on a whim. The system makes no allowances for breakdowns, and it also surmises that you have phone and/or web access while travelling. Mobile phone access remains an issue Australia-wide once you get away from the cities and major regional centres, and web access is generally much worse.

Case in point: We were in the Little Desert NP in Western Victoria and decided we’d camp for the night at the next designated campsite. Of course, we found when we got there that there was no self-registration shelter or pay-in box, and the only way to camp legally was to book and pay online. Trouble was, while there were a couple of signs telling us how to do it, there was absolutely no mobile phone reception (Telstra or Optus). 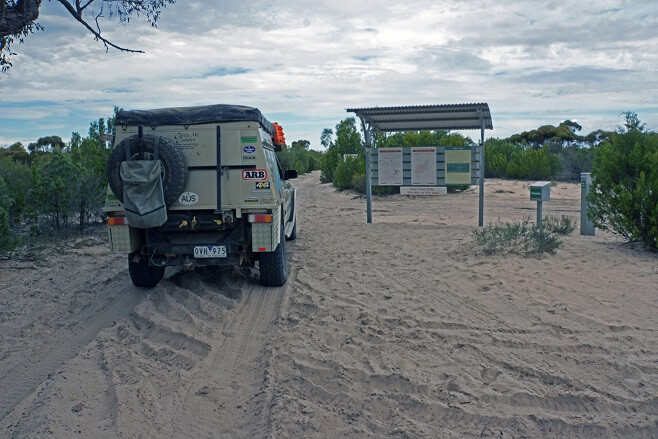 But it gets even crazier at some parks. At the Bungles, for instance, you have to book your campsite online, but you pay your access/entry fee at the information centre inside the park. How ridiculous is that? Then, last year, when we decided we’d like to stay an extra day, we were told we’d have to do that online. We pointed out to the lady, who should have known anyway, that there was no internet access. After a discussion that went on for some time, that included the fact we were about the only people in the campground, she relented by saying, “I’m doing you a favour, but don’t tell anyone.” A favour? Yeah, right.

Another time, when we were down in Innes NP at the foot of Yorke Peninsula, we decided we wanted to camp for a night. At the information centre there was a self-registration computer set-up that required a credit card payment. Guess what? It didn’t work! We’ve had the same issue on Cape York with the self-registration computers that are scattered around the Cape, supposedly for our convenience.

MORE How to poo in the bush

From what we’ve heard from various sources – online forums, park rangers, etc. – this web-based system causes a lot of angst for both the campers and the rangers involved. Of course, if the powers that be have decided online booking is the way it will be, then come hell or high water that is what will happen.

However, some places we’ve visited have used a more sensible approach. While touring the parks and reserves in the US and Canada we found very few campsites that relied on web-based booking systems. Those that did had a mix of sites, some which could be booked online and other sites that could be booked and paid for at an info/entry shelter.

It doesn’t seem to be too hard. Keep the on-site pay-in stations for those spur-of-the-moment travellers and have a web-based system for those who can and want to do that. That would suit all of us! But I’m guessing the powers that be here in Australia will have plenty of reasons for not doing that and bugger the people who use the parks most.