New engine and a boot for Audi’s updated rocket

Oman seems like an odd spot to launch a new car.

Snuggled up to a country where women aren’t allowed to drive (Saudi Arabia) and the current war-zone that is Yemen, Oman is a free, safe but nevertheless sandy destination.

And though the roads through the Dhofar Mountains in Oman’s south are smooth, wide and empty, they’re also covered in a layer of dust, blown-in sand and camel tail-pipe emissions. I’m not making any of this up. At least the camels themselves seem pretty road-smart. The goats? Not so much. 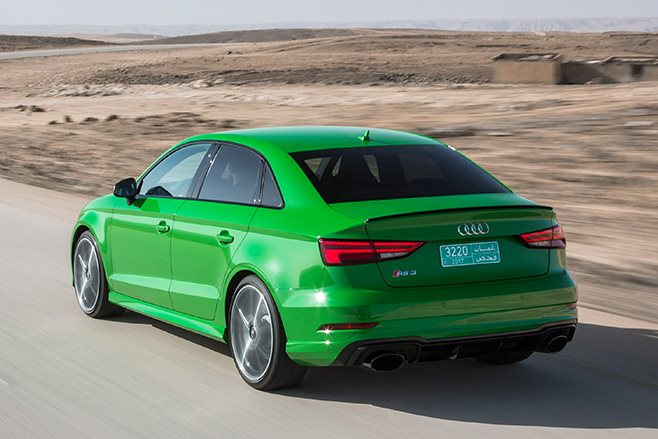 But maybe there was genius in Audi’s decision to launch the upgraded RS3 in such a location. For a start, once you’re out of the city, the speed cameras peter out and the road starts to rise into the rather magnificent Dhofars, twisting into come oddly-cambered bends in the process.

There are straight bits where it’s possible to let the new 294kW engine off the leash and the curly bits give you a chance to get a feel for what is a very tactile platform with sharp steering and firm-but-fair suspension.

And when you suddenly go blasting into a camel-exhaust section, the active centre diff can have a play at getting you through still pointed in the right direction. 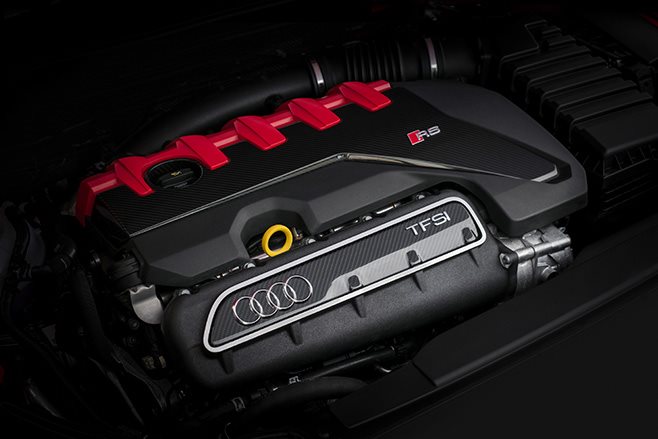 Two things (mostly) are new about the facelifted RS3. The first is that it’ll now be available in a sedan bodyshell which is actually pretty appealing as it ditches the shopping-trolley thing that the Sportback does so effectively. Yet it’s still kind of cuddly looking in the same way that a pitbull still likes a pat.

The other news is that there’s an all-new engine lurking under the lid. It remains at 2.5 litres and it’s still a turbocharged five-cylinder, but now it’s all alloy, weighs 26kg less, has an improved variable valve timing and lift system, and makes an extra 24kW and five Newtons.

The devil is in the detail and with stuff like a bigger intercooler, a water-to-oil engine-oil-cooler, a simplified serpentine belt system and a second set of port-mounted injectors to help the direct injectors, it’s taking things to new heights. The performance hike mightn’t sound like much but, clearly, this is a big stepping stone for Audi engines generally. 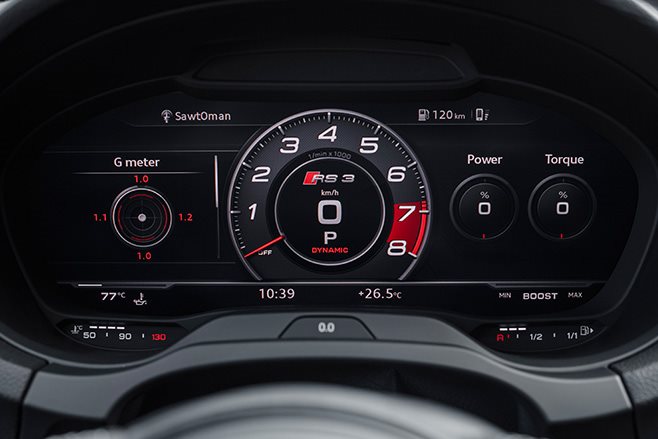 The rest is the rest: The active centre diff remains and the only other real piece of new ground the RS3 breaks is the option of a set of carbon-ceramic brakes at this price-point. Don’t know what they’ll cost yet, but figure on somewhere between $12,000 and $15,000.

And while they only replace the front hardware, they do feature 370mm rotors, eight-piston calipers and they take another 12kg off the Audi’s front axle.

Like the previous RS3, the new car is a mightily tactile thing. The steering is pin-sharp and the ride, while firm, ensures you stay in contact with what all the bits and pieces of the car are doing. It never comes across as sensory overload, but you won’t be left wondering. This is a good thing. 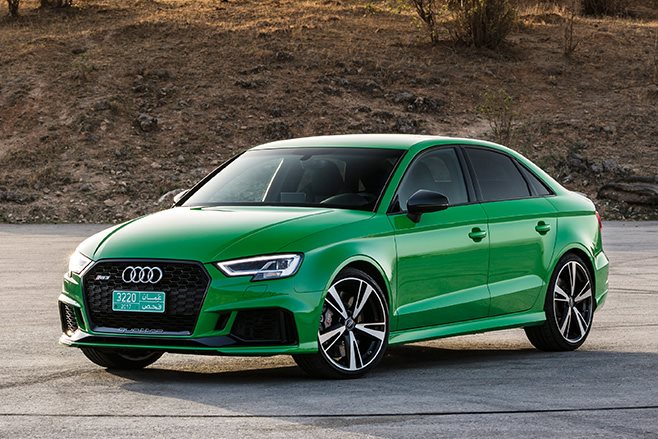 The engine feels familiar and, importantly, it retains that yammering five-pot soundtrack, especially with the active exhaust valve open. The seven-speed DSG (Audi calls it S-Tronic) is the only gearbox the RS3 will get but it has that knack of smoothing out full-throttle shifts while keeping them snappy at the same time. It’s cut from the same philosophical cloth as the chassis.

There’s a general feeling of there being a bit less weight over the front end, but you’d probably need a back-to-back experience to define it any further than that. One thing that may have changed, though, is the absolute requirement to tick the Magnetic Ride box when out shopping.

In the past, MR has been a no-brainer and the car hasn’t felt right without it. But now, we’re kind of left wondering. See, the difference between Sport and Comfort appears to have been shortened up a bit, while the loss of 26 front-axle kilos seems to have made the non-MR platform almost as good. 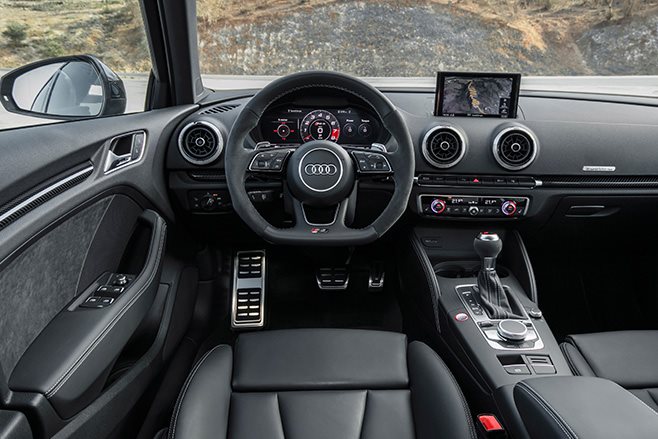 But here’s the catch: we only drove the non-MR car with the carbon brakes fitted, so there goes another 12 kilos. A drive of the non-MR, non-carbon-braked RS3 is what’s needed. And we’ll do that as soon as they hit the beach Down Under.

But we can tell you that the centre diff and the ESP match beautifully with the RS3 able to shuffle from a little entry-push to a proper tail-out exit should you happen across a patch of drifting sand or, that most Omani of situations, the mid-corner camel turd.

Four stars out of five 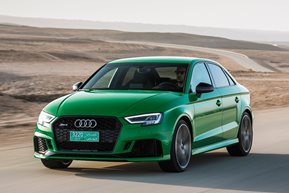