Jeep rolls out its new crop of one-off creations at the 2017 Easter Jeep Safari.

THERE’S no question the Easter Jeep Safari has become one of the world’s largest gatherings of seven-slot grille aficionados.

It is a who’s who for the off-road world and should be on the bucket list of anyone that dreams of Southern Utah’s ochre sandstone and traversing the region’s slick-rock trails. It began more than five decades ago as a small trail ride for the Red Rock 4-Wheelers, but today more than 20,000 people flood into the quiet town of Moab during the Easter week to meet new friends, rub elbows with manufacturers, have a coldie at the Moab Brewery, and show off their rigs.

Not to be left out of the action, the Jeep boys from Toledo, Ohio, where all Jeep Wranglers are born, spend the winter months creating what has become known as the Jeep Concepts. While the term ‘concept’ might indicate a prototype for a future production model (there have been many we would buy in a heartbeat), the reality is that they are one-off play toys for the twisted engineering minds back in Detroit. Just the same, we love them and were on-hand to give each a good romp through the back country.

In the growing market of compact SUVs, the new 2017 Compass is inflicting some pain on the competition. The Trailpass shakes a little salt in the wound with a 1.5-inch suspension lift, JPP’s new Granite Crystal 18-inch wheels, and Continental Terrain Contact all-terrain tyres. Protecting soft parts from trail damage is a pair of JPP rock rails and the Trailhawk skid plates. 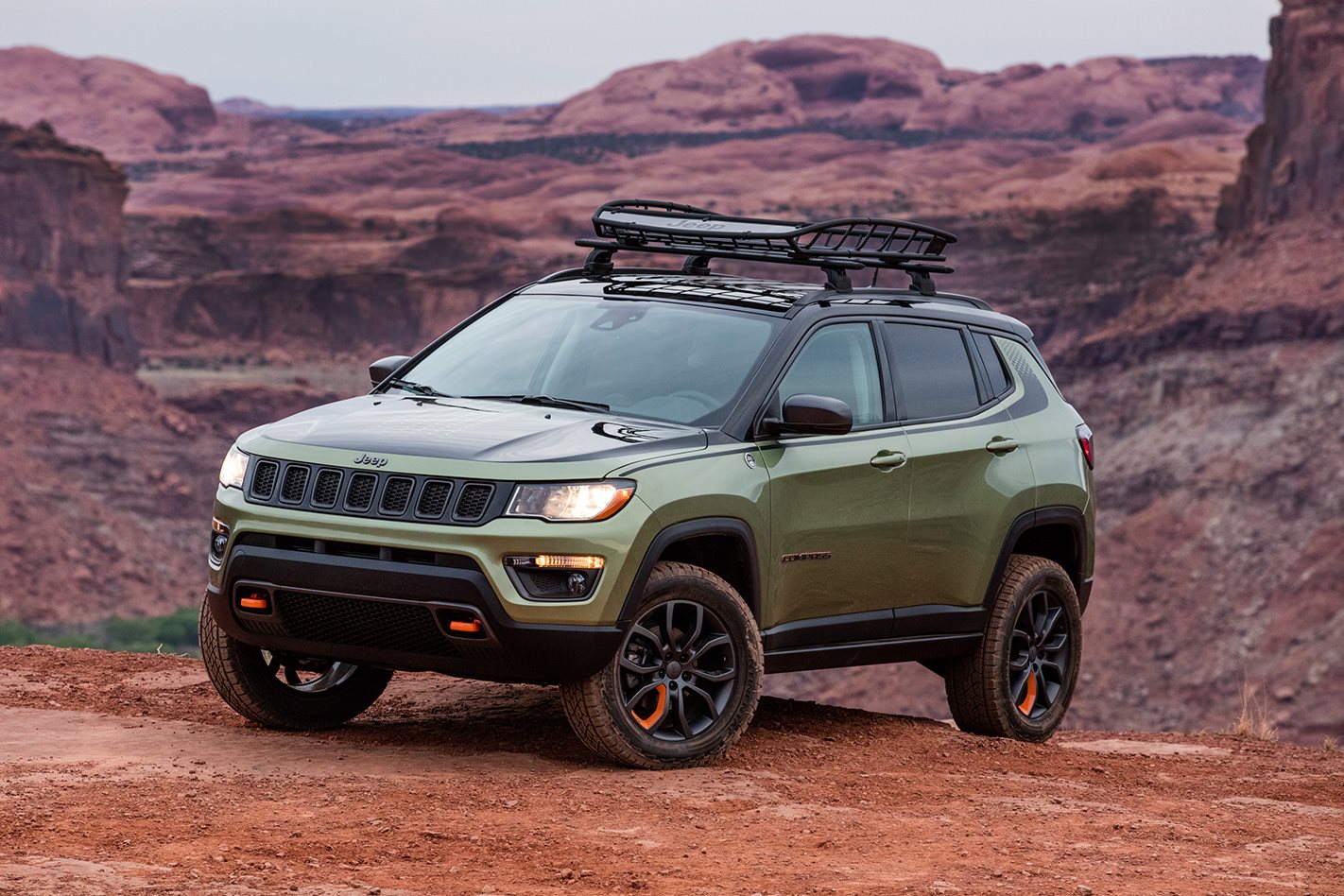 Inside we found the Katzkin leather seats superbly comfortable, and considering the Compass’ diminutive size, the interior quite spacious. All-weather mats keep dirt and general muck off the carpet, a cargo tray protects the rear deck, and the JPP roof basket has plenty of room for gear. Despite what the naysayers claim, the Trailhawk is a fairly capable vehicle.

Its 2.4-litre Multiair four-cylinder engine offers reasonable power while, combined with a nine-speed automatic, providing excellent fuel economy (up to 7.8L/100km). We liked this pint-sized brethren to the Grand Cherokee; it was just fun to drive.

The Jeep boys must have been reminiscing about the good old days when they pencilled out this year’s concepts. The Grand One brings us back to the glory days we dream of, when mum’s grocery getter had solid axles for and aft. This year marked the 25th anniversary of Grand Cherokee production, and what better way to celebrate than with a bottle of Jack Daniels and shot glasses hidden in the tail-lights? Yes, open the rear deck, slide out the lamp assemblies, and you have an instant tailgate party. 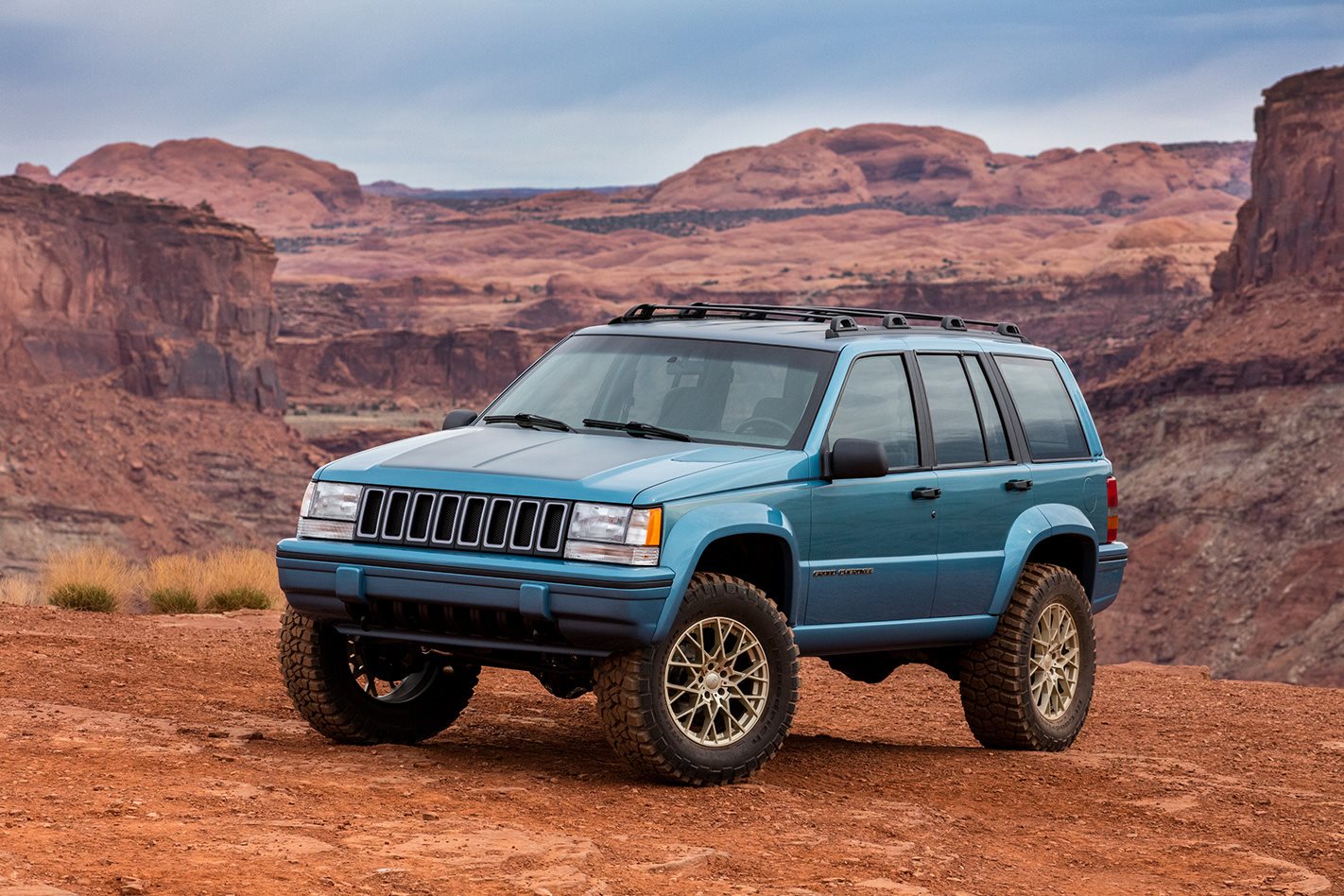 Now, on to the serious stuff. Mark Allen, Chief Designer for the brand, shared with me that the Grand One (ZJ) was purchased the same way you and I might source a vehicle, on the internet. They then slipped a 5.2-litre V8 under the bonnet, which is tied to a four-speed automatic. To make sure mum gets the kids to soccer during the wet, front and rear lockers were added to a pair of Dana 44 axles, along with a two-inch lift and 33-inch BFGoodrich Mud Terrain KM2s.

Jeep also stretched the wheelbase three inches, and repainting added a subtle wood-grain treatment to the body. Regarding the bar in the back, it is the perfect combination for a Jeep with a flannel plaid headliner, cassette player and clumsy circa-1990s car phone. Party on dude!

When the sun goes down and the Boogie Man hides in the recesses of your mind, the Luminator will surely send him running for cover. Working with the Magneti Marelli lighting division, the team at Mopar endeavoured to create the ultimate ‘night’ driving machine. 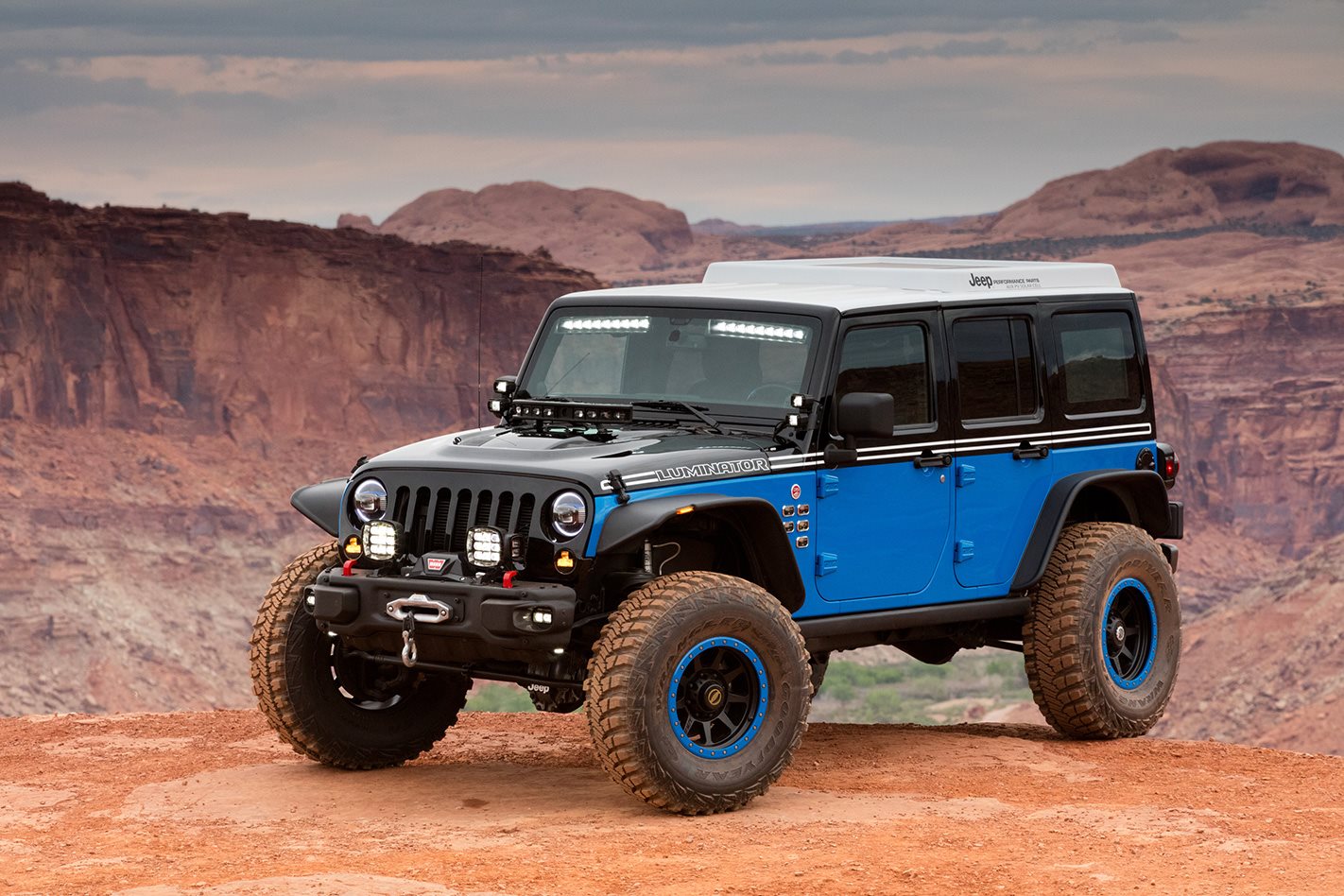 Starting with a full array of LEDs on the A-pillars and front bumper, they moved inside with a unique, windscreen-mounted multi-coloured light bar. This is a new idea and, given it doesn’t let any light spill into the cabin, might be a great application. On the bonnet rests a multi-directional LED array that, we are told, uses sonar to track and illuminate potential threats in your path (such as a wayward Skippy). Lastly is the rear stinger ‘antenna’ light for dune running at night, which changes colour depending on your speed.

Luminator is based on a JK Wrangler, and features Dana 60 axles, four-inch JPP lift and Fox remote reservoir shocks, and 37-inch Goodyear MTRs on 17-inch Mickey Thompson Deegan rims. Underneath are a full complement of skid plates and a set of JPP rock rails. At the end of the day, standing in the beam of the Luminator is akin to looking directly at the sun... the reality is that you might need some Coppertone and a good pair of sunnies.

Chasing, or should we say, leading the retro craze is the Quicksand JK. With intake jugs rising from the hood, a chop top and a wide stance, Quicksand could have easily landed a roll in American Graffiti (the off-road sequel). It hails from an era before smog laws and government-mandated airbags, and its sleek lines are reminiscent of a 1930s roadster – but with 1960s muscle. The fire-beating heart of this hot rod is a 392-cubic-inch crate Hemi-fitted with Borla injection and custom valve covers. 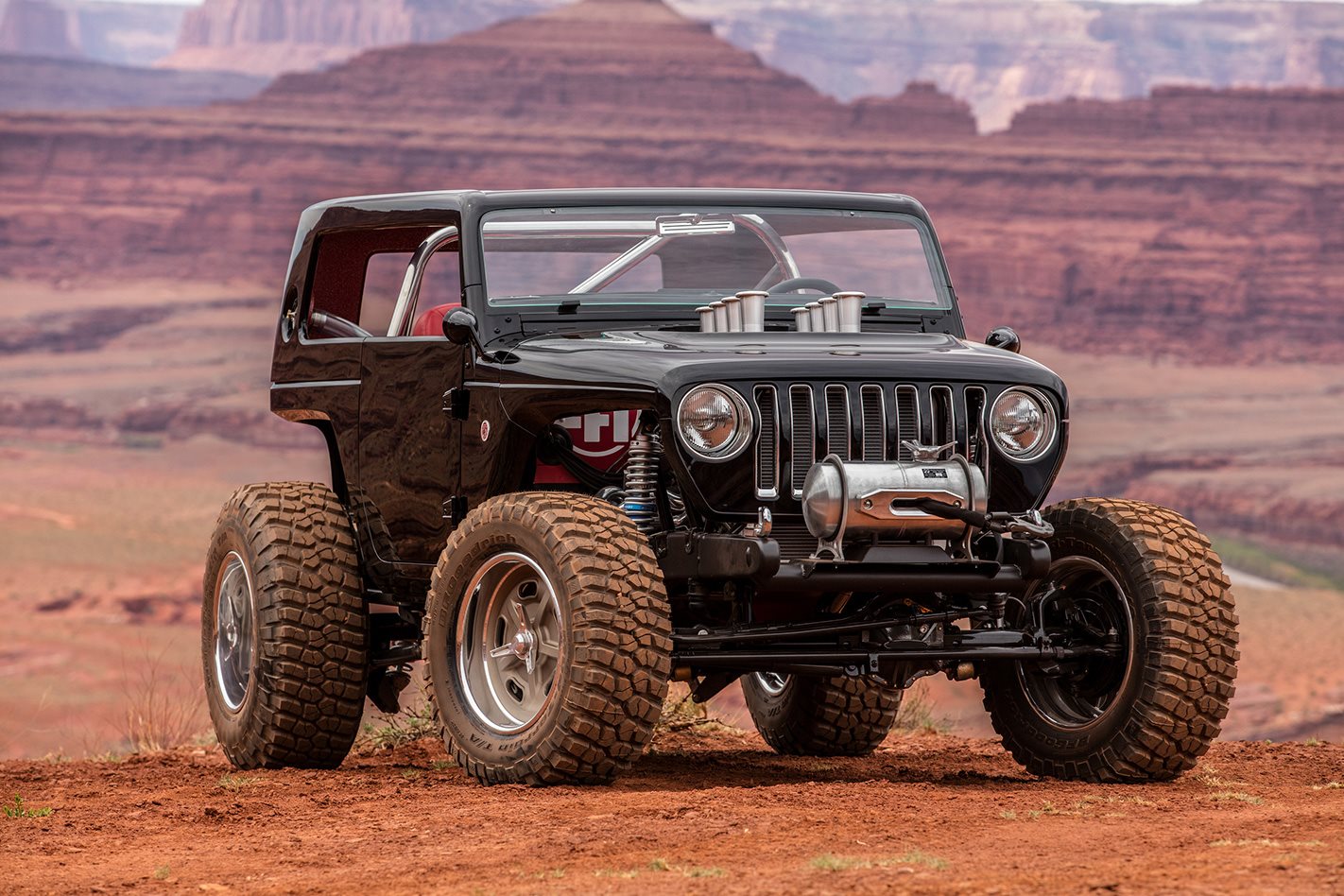 A six-speed manual gearbox sends power to the front Dana 44 and rear Dana 60 axle, which are fitted with 4.56:1 and 5.13:1 gears and accommodate a two-inch diameter difference in the BFGoodrich KM2s (32 and 37 inches, respectively). To manage the load and keep the wheels on terra firma, they added a set of King dual-rate coilovers.

Video: WWII Jeep: The Greatest 4X4 of all

The wheelbase was stretched six inches overall, while the wheel wells moved for and aft in sand buggy fashion. The winch is concealed within an aluminium ‘fuel’ tank on the bumper, and recovery gear resides in the parachute pouch out back. Other goodies include custom chrome headers, rollcage, a blood-red leather interior, aluminium door panels, and racing fuel cell with dual fill ports. With more than 500 horses at the rear, Quicksand was a foot-full of fun and one of our favourites.

Wildlife on the African savanna doesn’t distinguish a vehicle from its occupants, and that is a good thing if you decide to drive the Safari JK across the Serengeti during the Great Migration. From the driver’s seat, the Safari provides a nearly unobstructed view of, well, everything. The doors and rear windows are crafted from clear plastic, and the top is translucent. The Safari’s exterior is trimmed canary yellow and subtle grey, which flows to the interior along the dash, steering wheel and custom leather seats. 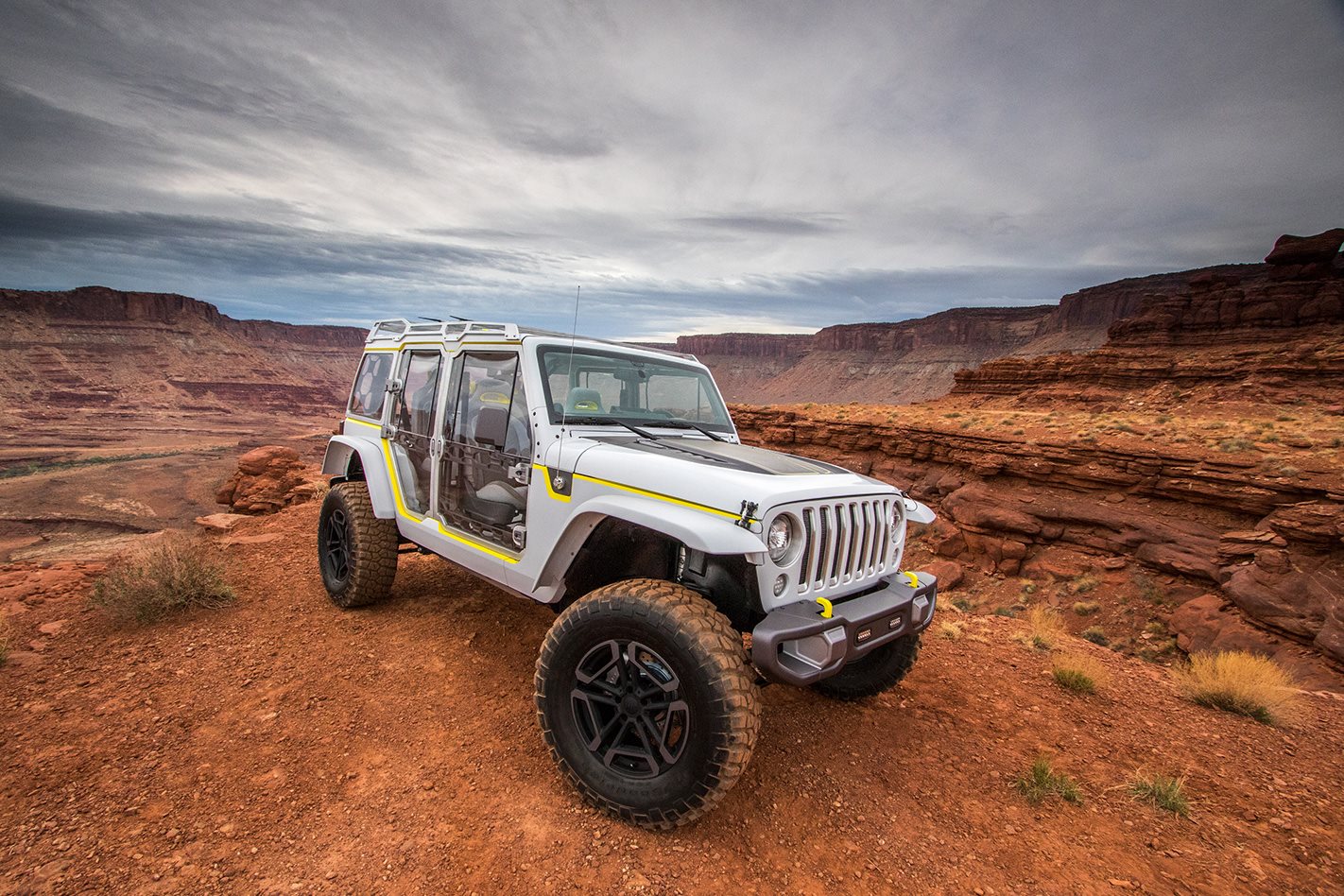 Interestingly, they raked the windscreen back three degrees and slanted the rear window forward. The floor was treated to a spray-on bedliner and left alone, which makes for an easy wash-down at the end of a long game drive. A walk-around reveals 35-inch BFGoodrich Mud Terrain KM2s fitted to custom 18-inch alloy wheels, aluminium accents throughout, and 10th anniversary Rubicon bumpers; the front sports a Warn 9.5ti winch and a set of JPP’s new fog lights.

Supporting the Safari is a two-inch suspension, Fox shocks, Dana 44 axles and JPP’s rear disk brake kit. Other than the addition of a Mopar cold air intake, the engine, a 3.6-litre Pentastar V6, and drivetrain was left in standard factory form. Up top is a CNC-milled billet aluminium rack integrated into the roof. And yes, that is a drone landing zone out back. For even better viewing of the surroundings, the rollcage takes the place of the B-pillar, which was removed. If the African Savanna calls, we are giving Jeep a ring to see if we can borrow the Safari.

Looking for the perfect platform to display almost their full line of Wrangler accessories, the guys at Jeep Performance Parts began with a stock JK. However, they didn’t stop there, as the four-door provided a blank canvas to showcase products you can find in their catalogue of OE parts. 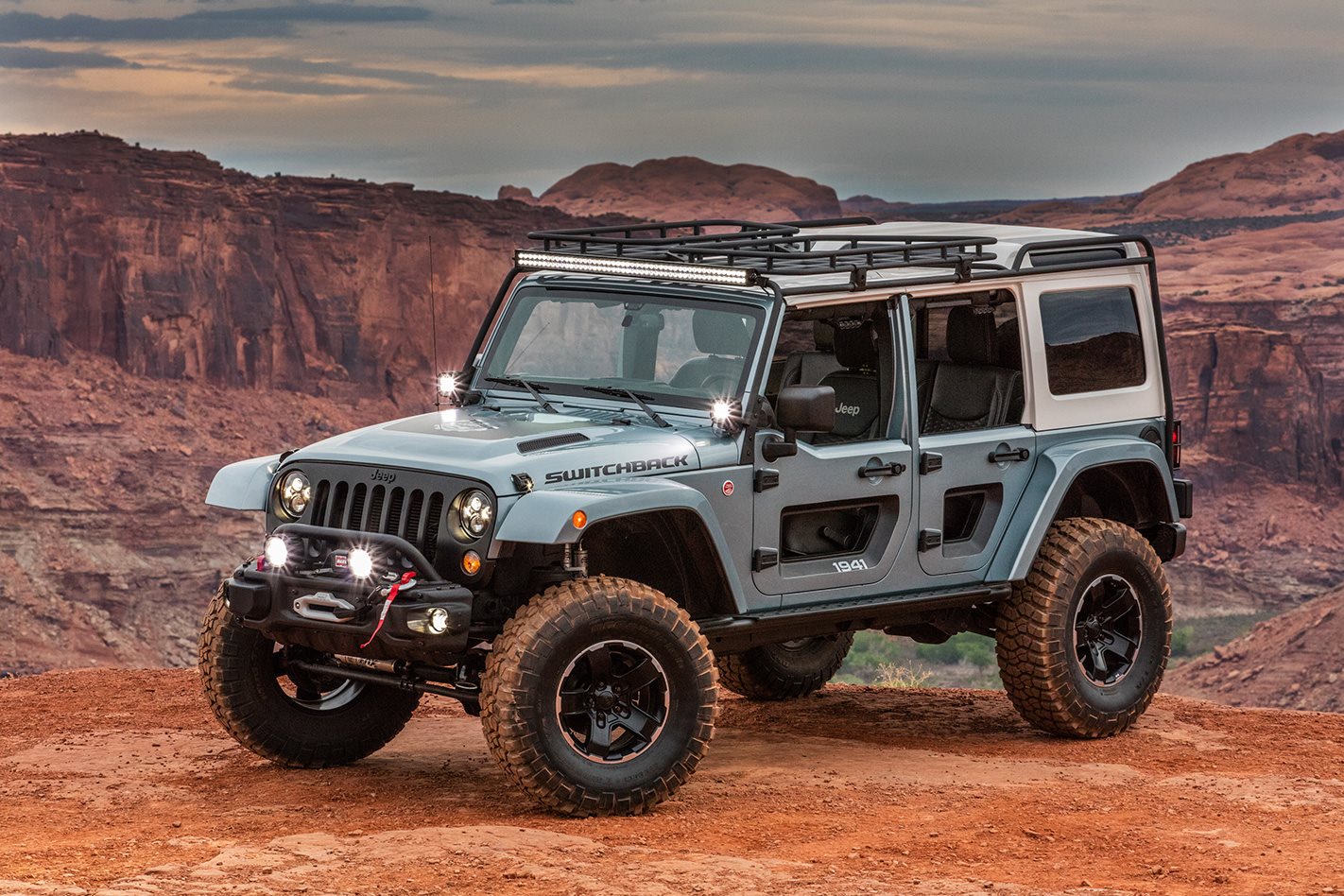 Lest we overlook its 17-inch satin black alloy wheels and 37-inch BFGoodrich KM2s. The interior is stylish, yet holds a utilitarian feel. The Katzkin leather seats are luxurious, while the easy-to-clean coat of black bedliner in the tub reminded us we were in a Jeep. A few items we’d like to see come to fruition are the Power Dome vented hood, the free-flowing half doors, and concept Safari two-tier hard top and matching rack.

One can’t help but love the retro-modern CJ66. It hails from another era, when vintage iron was the norm and petrol was less than a dollar a litre. With their sights on building a vehicle with upgraded running gear and old-school appeal, the Jeep crew melded a 1966 CJ-6 Tuxedo Park body with a TJ chassis. 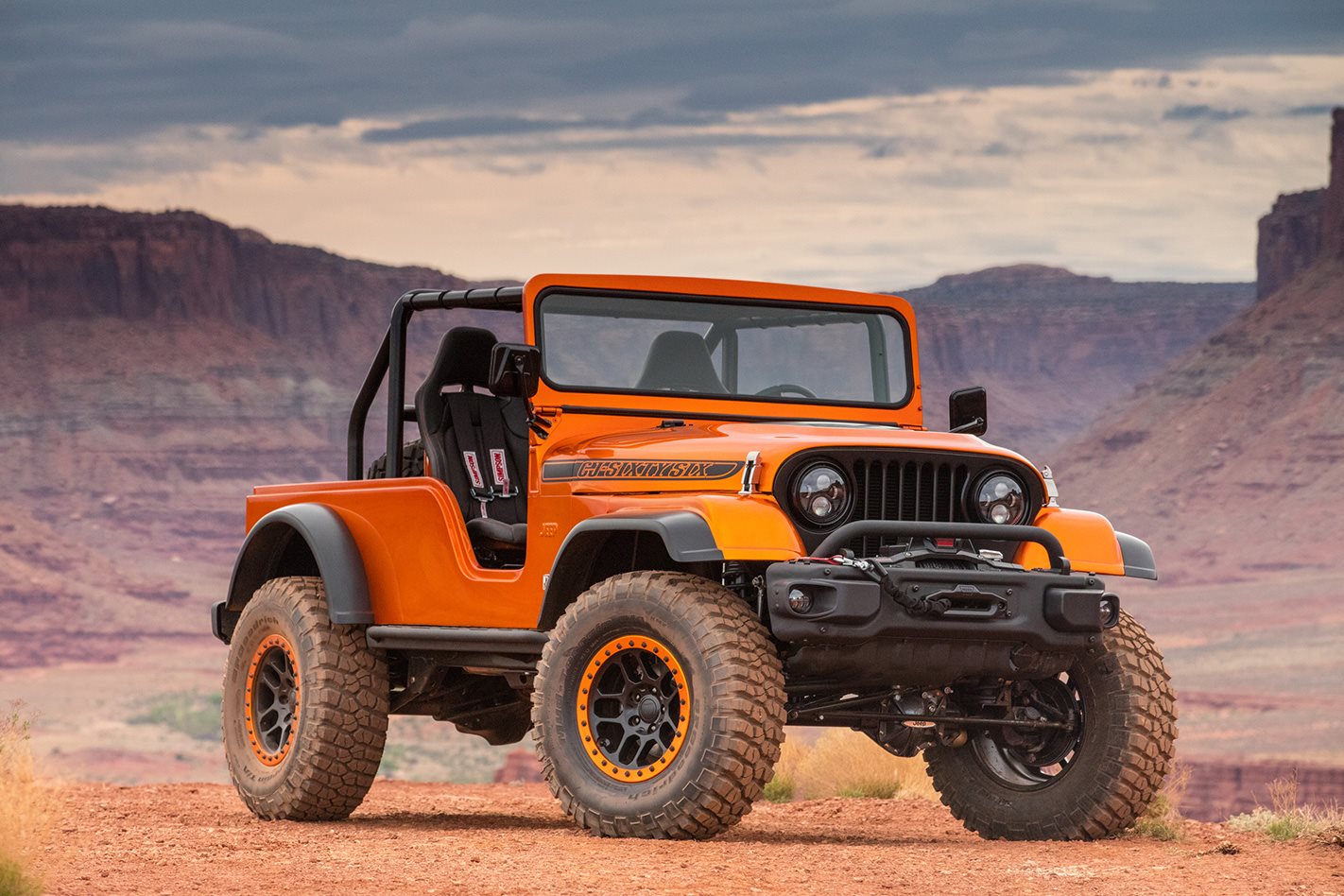 Desiring more moxie than the original six-cylinder could muster, a crate 5.7-litre Hemi was slipped in backed by a late-model six-speed manual transmission. Underneath, a pair of Mopar Dana 44 axles from Jeep Performance Parts (JPP) transfer power to 17-inch JPP beadlocks, while a set of 35-inch BFGoodrich KM2 Mud Terrains apply power to the tractive surface.

A two-inch JPP suspension and Fox shocks manage articulation, and recovery, if needed, is via a Warn 9.5ti winch. Simpson harnesses securely hold driver and navigator in the race-inspired seats, while modern gauges keep track of system vitals. A few other cool accessories are the quick-access spare tyre, air compressor and custom rock rails. In short, this rig is awesome.

FINALLY, the Jeep that has been on our bucket list since the day it rolled off the assembly line. Inspired by the WWII-era Willys MB, the Salute was built last year to celebrate the brand’s 75th anniversary; they actually shut down the assembly process to produce this one vehicle. 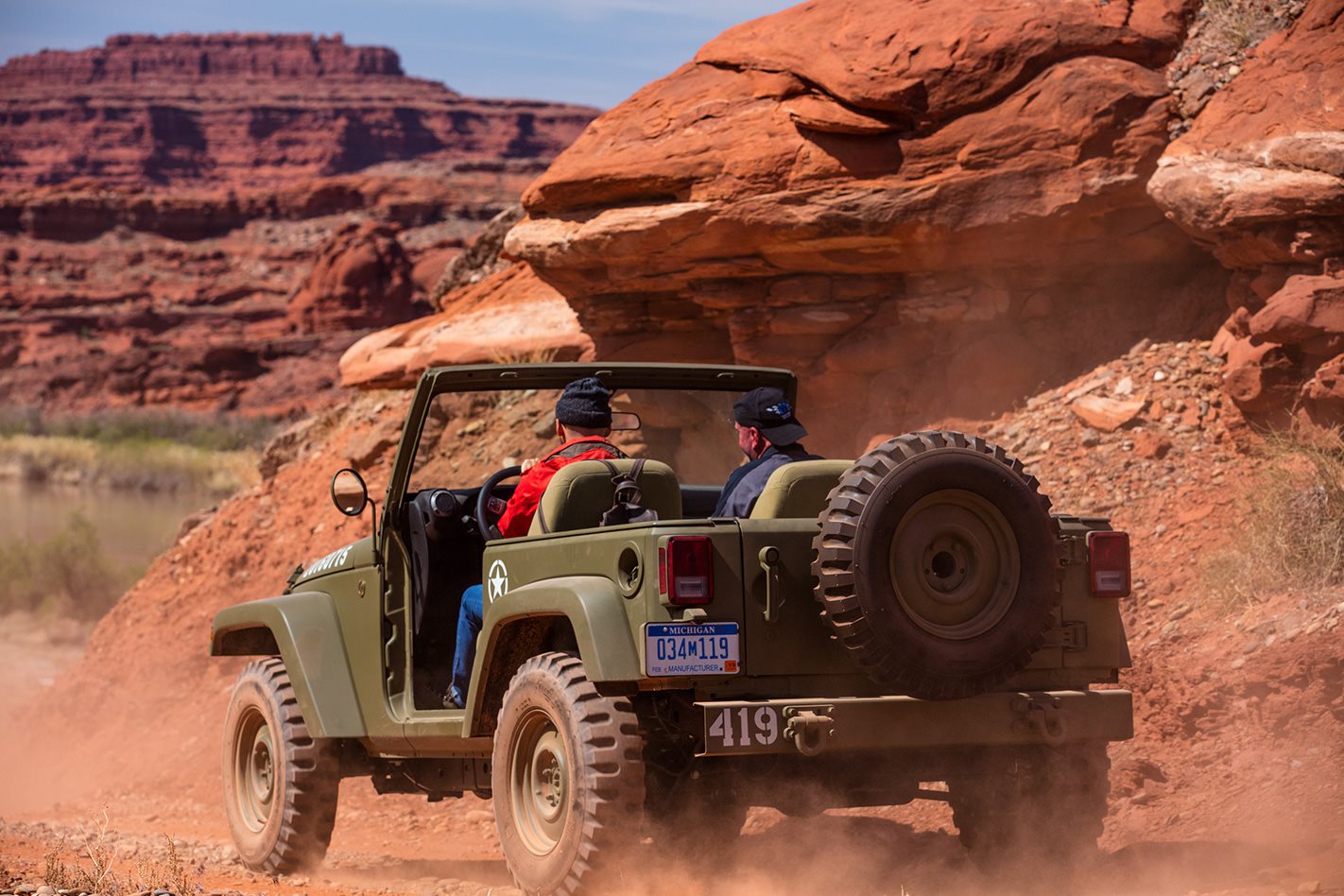 The olive drab Salute doesn’t sport a 500-horsepower mill or monster tyres, but what it lacks in bling it makes up for in pure cool factor. It is said that the Second World War would not have been won without the Willys, and everything from the five-point star on the bonnet and airlift D-rings on the bumpers, to MIL-SPEC non-directional tyres and 16-inch steel wheels, the Salute imbues a sense of patriotism.

It was quite evident that this modern artefact of Jeep history was the pride of the executives who were present. It was an honour to turn the key and tool around Moab’s back country in it.