WITH a Raptor version of the Ford Ranger coming our way in 2018, we thought we’d take a look at the vehicle from which it takes its nameplate.

It was at the SEMA Show in 2008 that Ford SVT unveiled the first F-150 Raptor as a 2010 model, and it was on our annual visit to SEMA that gave us the opportunity to drive the 2017 model.

Very little is confirmed as to what shape and form the Ranger Raptor will take when it lobs here, but the original F-150 Raptor was built as a desert racer for the streets in the same mould as the pre-runner trucks that racers use to reconnoitre tracks such as the Baja 1000. That original Raptor was powered by a 230kW 5.4-litre petrol V8 engine, with a 302kW 6.2-litre engine taking on the role from 2011 to 2016. The 13th gen of F-150 landed in 2015 with a new aluminium body, and the second-gen Raptor adopted this platform in 2016. Controversially, the traditional V8 engine was swapped for a twin-turbo 3.5L EcoBoost V6 which made more power and torque than the old-tech V8; and it’s what powers the vehicle we have here.

One thing we can be certain of with the Ranger Raptor is that, unfortunately, it won’t have this stonking 335kW/691Nm EcoBoost V6 engine. The F-150 Raptor’s mill mightn’t have the brutality and sound of a V8, but it doesn’t hold back on performance. Floor the throttle on the Effie and the speedometer needle swings clockwise rapidly and you’re soon exceeding freeway speed limits. US tests have found the 2700-odd-kilogram Raptor launches to 100km/h in around 6.2 seconds, so it’s no slouch, even if the acceleration is deceptive. The engine is backed with a 10-speed auto transmission and a 4WD system that offers the options of rear-wheel drive, on-demand all-wheel drive and locked 4x4 with high and low range. Ten speeds might be around four more gear ratios than you need, but it’s good for fuel economy and keeping that turbocharged engine on the torque. Adversely, the abundance of ratios helps hide the performance of the truck.

The transmission also benefits from a multi-terrain system offering Sand, Rock and Snow modes, but the mode we like best is Baja. Baja mode switches the transfer case to four-high and desensitises the electronic traction and stability control system to allow more driver control without intervention. It sharpens the throttle response and transmission shift points to make the most of the available performance. As the name suggests, Baja mode is the most fun in open desert terrain – with the gas pedal pegged across a desert claypan, this was the only time we really felt the usually subdued transmission slamming though its gears as the sandy expanse blew on by. But we were only so brave in a road car in the middle of nowhere, so setting any speed records were put aside.

In trickier off-road conditions, the Rock Crawl mode automatically selects four-low in the transfer and activates the rear diff lock for maximum traction. Combined with All-Terrain tyres, long-travel suspension and healthy ground clearance, this allows the Raptor to perform in the rough stuff as well as it does at speed.

The Terrain modes are selected via buttons on the steering wheel and, as mentioned, some of them automatically take you to high and low range (locked transfer case), so you need to be careful when playing with buttons in town to avoid damage to the driveline.

The EcoBoost engine is tame and easy to drive around city traffic and sounds just like any other uninspiring chump V6, but floor the accelerator on a freeway onramp and the note changes to something almost V8-like.

At first we thought this might be thanks to some sort of tricky bi-modal exhaust system, but after hearing it from the outside, it still sounds like a V6. What Ford has cunningly done is piped a fake, deeper sound into the interior via speakers. It’s not just a recording of a V8, but it takes the actual exhaust tone and runs it through a synthesiser that gives it a V8-like growl. It’s not unpleasant, but it’s not real, either, and like other things that aren’t real, it’s pretty disappointing when you find out about them.

The Raptor is more than just an engine and transmission; it gets its desert-dusting ability thanks to a Baja-inspired suspension package featuring 3.0-inch Fox coilovers at the front with Fox shocks supporting the leaf springs at the rear. The setup offers 330mm of travel at the front and 353mm out back, so the Raptor works just as well on uneven off-road tracks as it does on flat-stick desert dashes. The bypass action of the Fox shocks allows them to adapt to the driving conditions by allowing oil to pass back through channels in the shock housing rather than through the piston dampener when the shock is in a partially compressed position. This applies when driving on paved or relatively smooth roads and gives a softer, more compliant ride. When the shock is further compressed into its ‘bump zone’, say in rough terrain, the oil is forced through the dampener piston to control the ride in the demanding conditions.

The Fox system works wonders. We detoured to the Mojave Desert, where we drove on rough, sandy tracks. Many of the tracks had washouts and ruts across them and, while we were far from race pace, the Fox-equipped Raptor covered them in a far more relaxed and composed way than most other production vehicles. This allows you to drive in a much more controlled manner with less risk of damaging the vehicle and less stress on both truck and driver. Drive any off-road vehicle thus equipped and you soon realise why many people are spending big on top-shelf aftermarket shocks for their own 4x4s. Add the 35-inch BFG KO2 tyres to the impressive suspension package and the Raptor rides well over any terrain. Desert tracks, sand dunes and jointed concrete interstate freeways were all covered in comfort and confidence.

The comfort continues inside, with lots of soft-touch points, lashings of leather and all the features you would expect in any top-of-the-range truck. Power leather seats, massive sunroof, leather steering wheel with paddle shifters for the 10-speed, and adaptive cruise control are all features loaded into this truck, and with its acres of interior space it feels more like a luxury car than a load-hauling pick-up. Speaking of hauling, the Raptor falls behind other pick-up trucks and even our own one-tonne 4x4 utes in this regard. Towing capacity is just 2721kg in the Super Cab model but 3630kg in the bigger Super Crew as tested here, while the max payload is just 544kg – this truck is for performance, not load-lugging.

The Raptor starts at US$51,310 but gets up to US$64,770 if optioned as this truck was; and then there are reports of US Ford dealers charging an extra $10K and up for Raptors because the trucks are in such high demand. 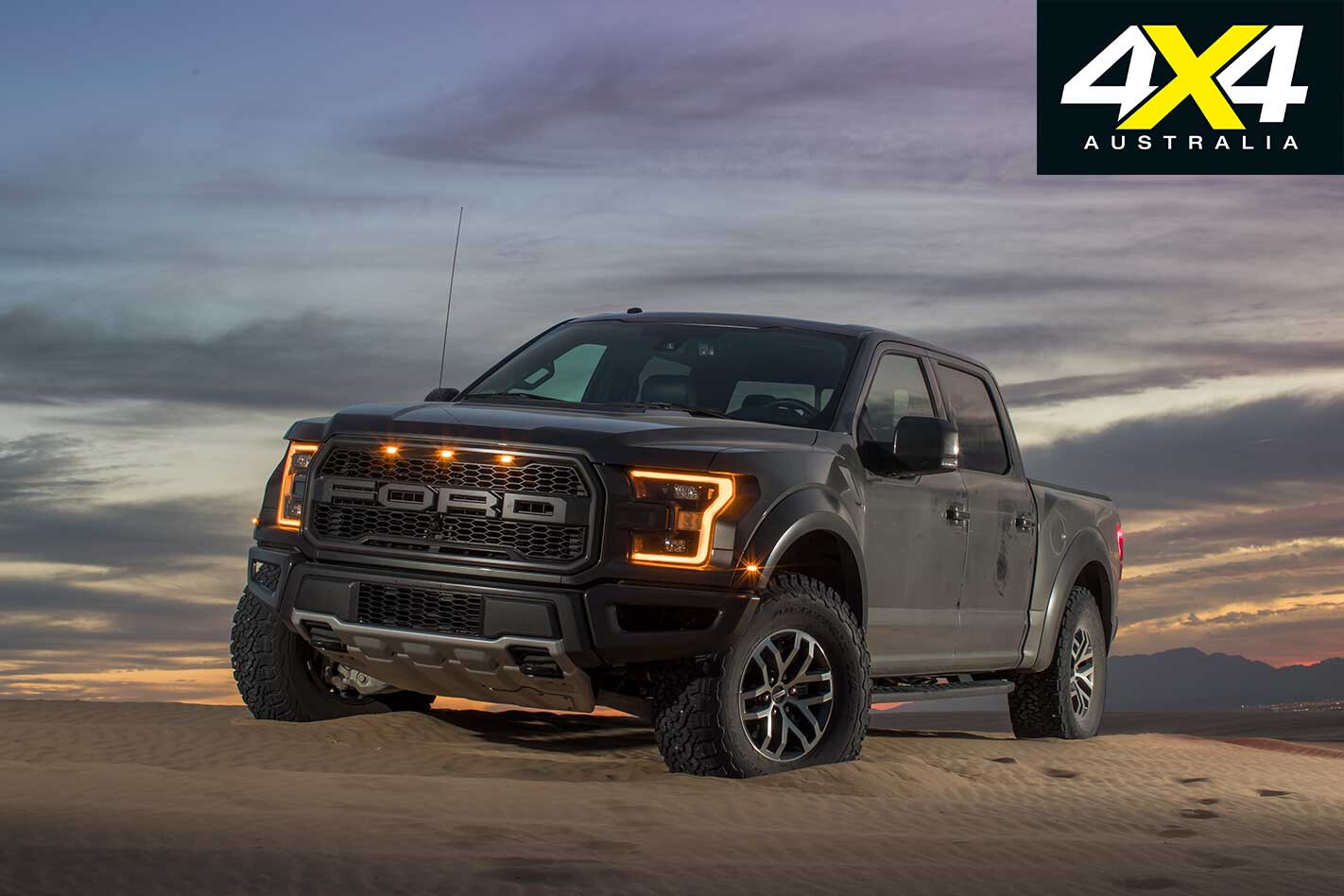 You can’t buy an F-150 Raptor or any F-Series truck through Ford Australia as they aren’t factory made in right-hand drive, but there are plenty of companies like Harrisons F-Trucks, Performax and American Vehicle Sales importing, converting and selling F-Trucks (including Raptors). But before you run out to grab a Raptor, be prepared to shell out around A$180,000 for a converted and certified new vehicle. Or you could just wait for the Ranger Raptor and see what Ford Australia serves up later this year.