Isuzu’s D-Max is more stayer than sprinter, but isn’t that what utes are made for?

THIS generation D-Max first arrived here in 2012. Most notably for a manufacturer with a long history of designing and building its own utes, this D-Max wasn’t a 100 per cent Isuzu product as was its predecessors.

The starting point for this D-Max was, in fact, a GM design, at least in terms of its basic chassis and body shell, even if Isuzu engineers were involved in the design process from early on.

Taking the basic chassis and body shared with the Colorado, Isuzu added its own engine, gearbox, transfer case, rear axle, springs and dampers, interior fit-out and exterior body panels, grille, lights and other details, to end up with what is a very different ute to the Colorado.

Things stayed much the same until 2017, when a heavily revised engine came along, as did six-speed manual and auto gearboxes (replacing the previous five speeders), more NVH control measures and enhanced equipment lists. For the 2018 model (as tested here) further revisions have brought suspension and equipment changes.

ALL D-Max dual-cab 4x4 utes have six airbags, a reversing camera, eight-speaker audio with a CD slot and USB and iPod inputs, a seven-inch or bigger touchscreen, cruise control, and trailer-sway control as part of the chassis electronics package.

The as-tested top-spec LS-T, which is auto only, has leather, electric adjustment for the drivers seat, proximity-key entry, push-button start, an eight-inch touchscreen, sat-nav, side steps, a reversing camera, projector headlights with DRLs and 18-inch alloys.

THE D-Max’s 3.0-litre four-cylinder diesel engine can trace its roots back to 2006 when it first appeared in the Holden Rodeo, effectively an Isuzu wearing a Holden badge.

The latest update to this long-serving engine for the 2017 model brought higher-pressure common rail injection, a new variable-geometry low-inertia turbo and new pistons. A diesel particulate filter (DPF), the key Euro 5 technology that is found on all the engines here, was also added.

Despite all these MY17 engine changes, maximum power remains at a modest 130kW (the lowest here along with Hilux) and the maximum torque figure is now 430Nm, up from the previous 380Nm; although, 430Nm is still a class-low figure shared with the Triton.

On the road things play out better than this suggests and, while the D-Max is no powerhouse, it’s still a relaxed engine and doesn’t need to be revved particularly hard to get the job done. It may, for example, have similar power and torque to the Triton, but it does the same job at lower engine speeds.

In its latest iteration the D-Max’s engine is far quieter than before; although, the general engine-running refinement still isn’t anything special. The fact it’s the largest-capacity four-cylinder here, and also runs a relatively high compression ratio, both work against its refinement and make it the harshest and nosiest engine here.

The six-speed automatic (an Aisin unit shared with Hilux) offers reasonably smooth and proactive shift protocols without ever being a sporty gearbox. The two very tall overdrive ratios (again like Hilux) also mean the gearbox is more about economy than performance, and the D-Max shuffles back and forth between fifth and sixth on undulating country roads, as does the Hilux.

As ever, fuel economy is a strong point with the D-Max and it proved the most frugal in this particular test, which is usually the case when it’s run up against any of its competitors.

The end result is a more comfortable ride at the rear than before, which is something most noticed when the D-Max is unladen. Not that it rode poorly before, nor was the front-to-rear suspension match unpleasant in any way. In fact, before Holden completely revised the Colorado’s suspension for the 2017 upgrade, the D-Max’s suspension tune on the same basic chassis was the more acceptable of the two.

THE D-Max’s off-road armoury is underdone in this company due to a chassis that doesn’t offer the same sort of wheel travel as the best in class, nor does it have a rear diff-lock as any sort of compensation. It’s also not helped by a notably effective traction control, the saviour of post-2017 Colorados which suffer the same modest wheel travel and lack of a rear locker.

Point the D-Max up a gnarly hill with deep holes and, along with the Triton, it is the first to struggle. In fact, only the D-Max and the Triton failed to make it up our set-piece hill climb.

But not all is lost, as the D-Max is still a capable-enough 4x4 for typical recreational off-roading. And, unlike several utes here, the engine air intake is via the inner guard instead of under the bonnet lip or in the engine bay, which is a far better arrangement for deeper water crossings.

DESPITE the D-Max getting more compliant rear springs for most models in the MY18 upgrade, the GVM of 4x4 models has been increased by 100kg to 3050kg, which seems counterintuitive. And with the 900kg payload, the D-Max didn’t feel as stable or secure chassis-wise than it did when previously payload tested, which was disappointing.

On a positive note the MY17 engine revisions, where more torque is available at lower revs, help carrying heavy loads, even if its modest 130kW doesn’t make the D-Max a frontrunner when it comes to heavy-duty load-carrying performance.

THE recent D-Max upgrades result in a noticeably better finished cabin and more equipment (such as sat-nav) on lower-cost models. This LS-T even extends to smart-key entry and start, but no reach adjustment for the steering wheel.

Still, the D-Max is comfortable enough and, if it’s space you’re after, it matches the Colorado and betters the Hilux, Navara and Triton. Five-star ANCAP, too, but no high-end safety features.

DESPITE Isuzu Ute only setting up shop in Australia in 2008 (even if Isuzu utes wearing Holden badges were sold here for decades before that), Isuzu now has 142 dealers nationally.

When you consider Toyota has 206 dealers nationally, that’s a fair effort. In the meantime the D-Max has a good reputation for reliability, simplicity of service and low service costs. The fact that the D-Max sells in solid numbers (more than 3500 4x4 models YTD) also means good aftermarket support. 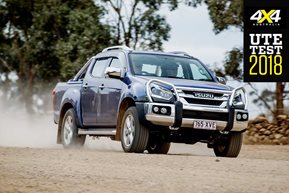 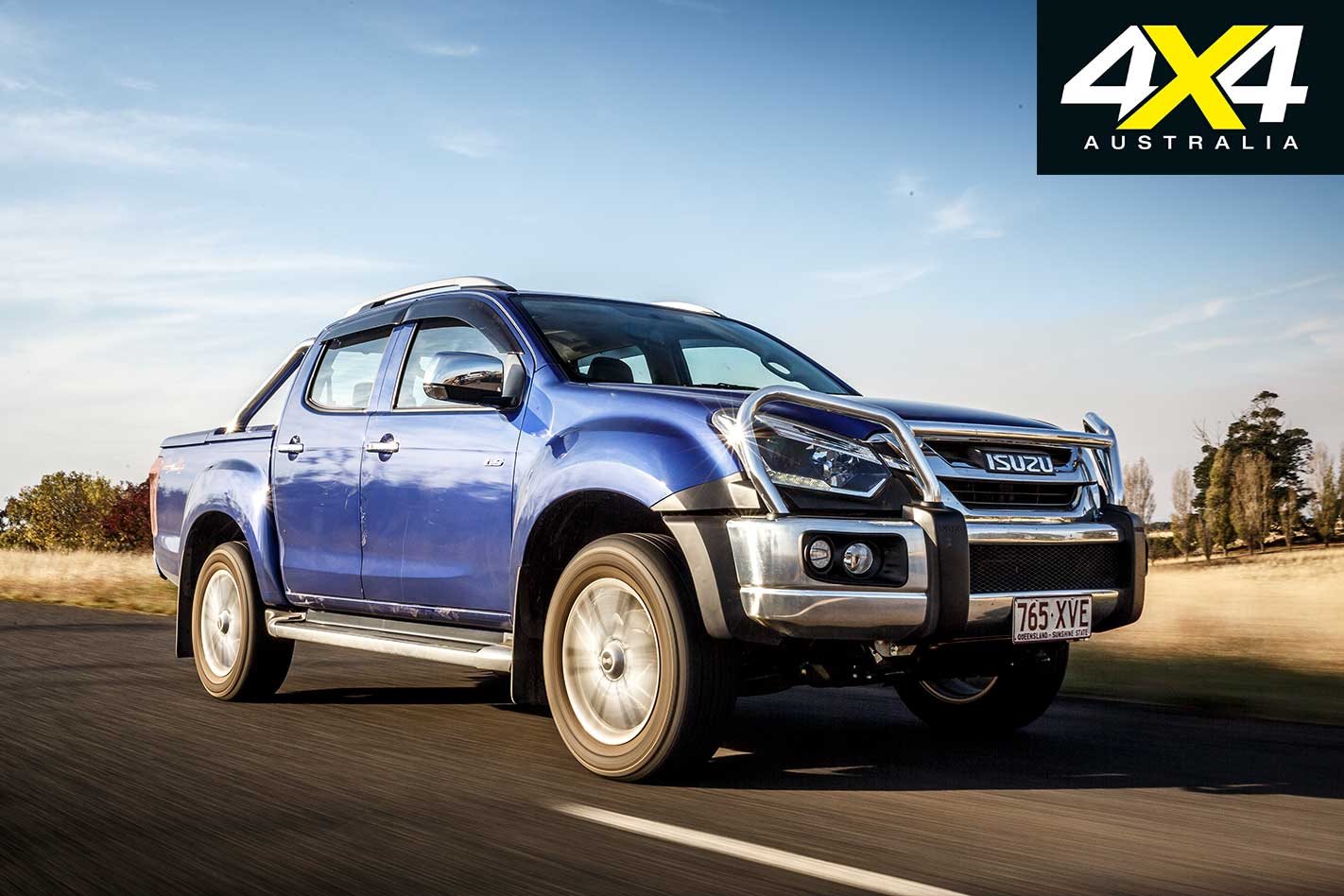 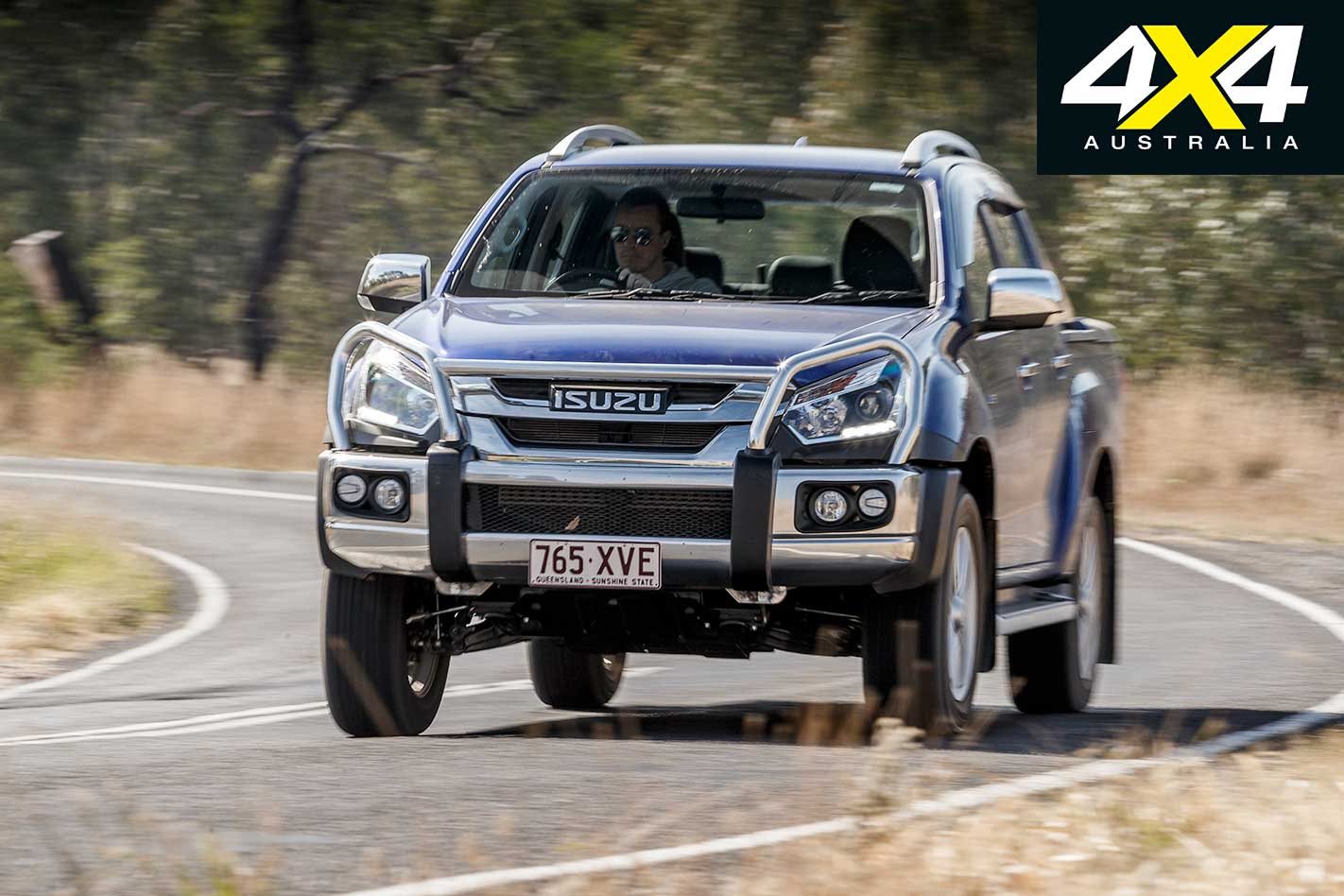 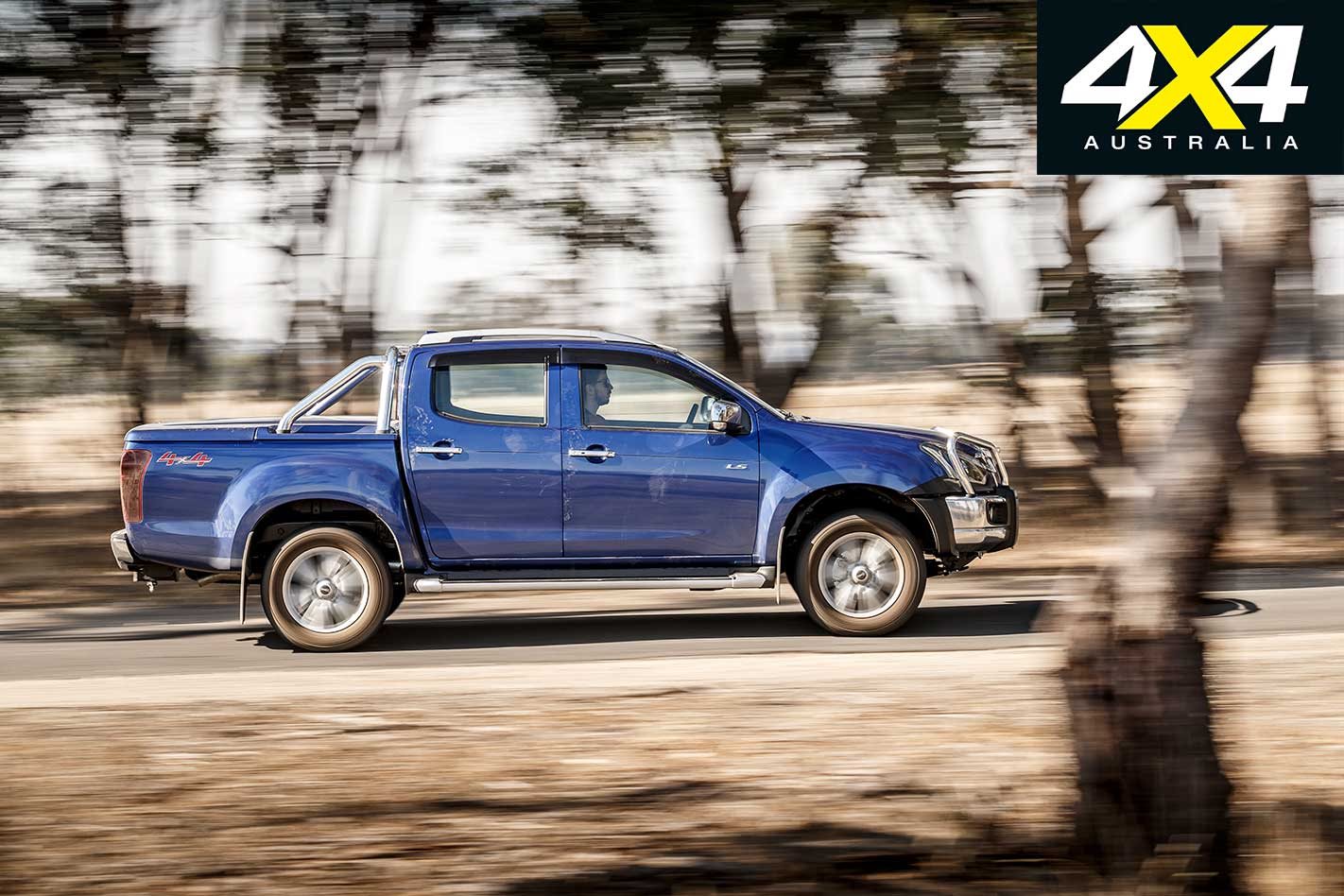 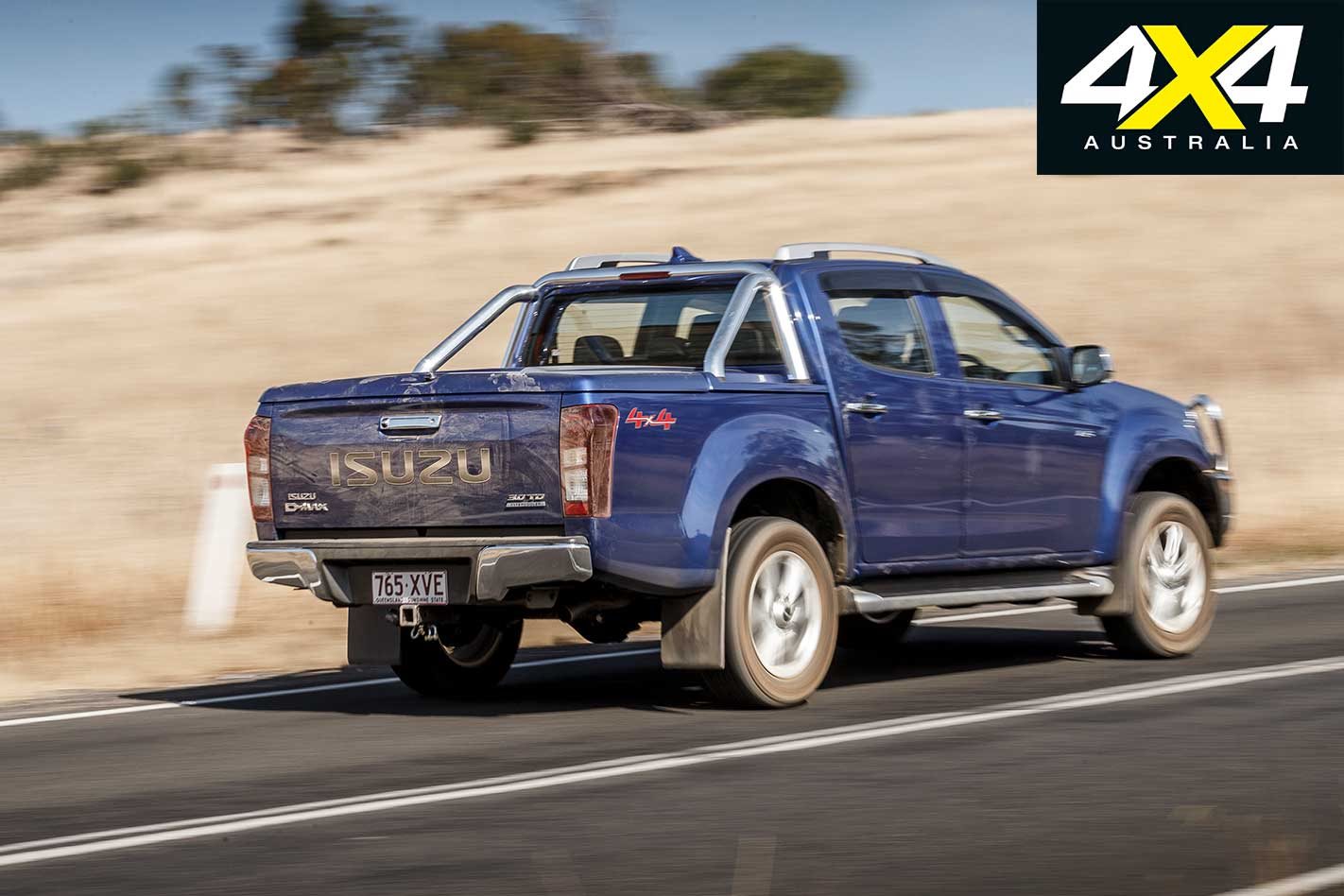 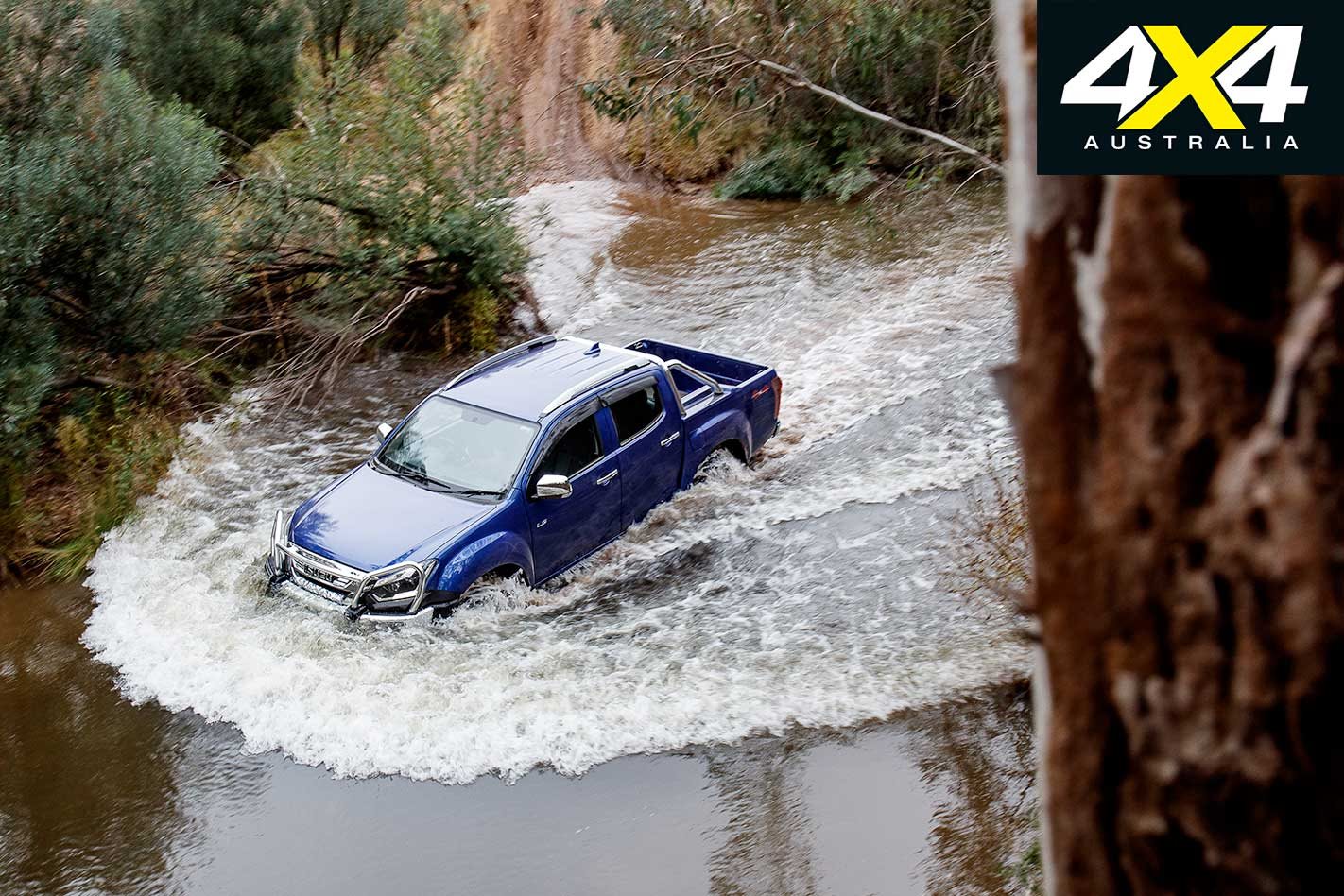 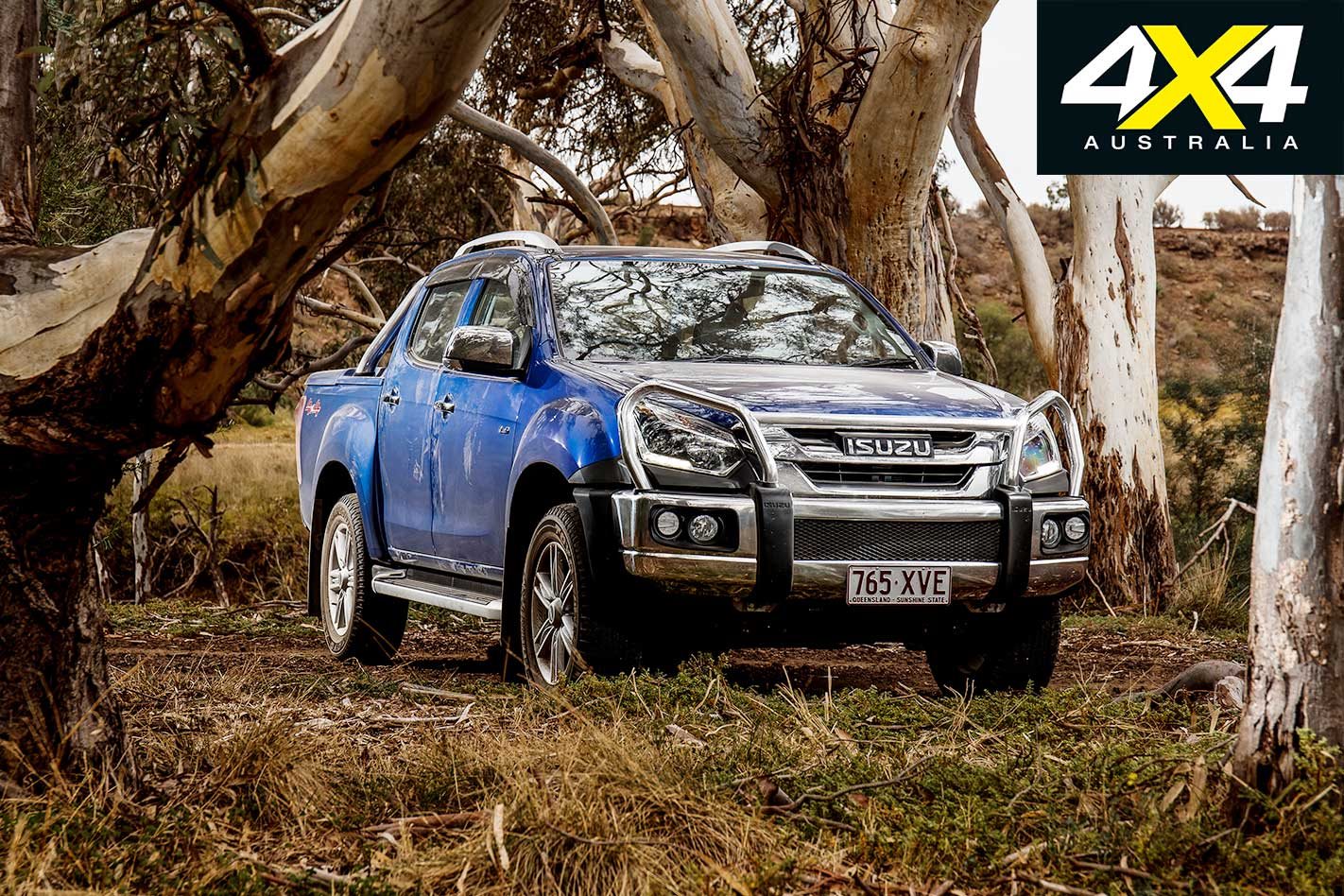 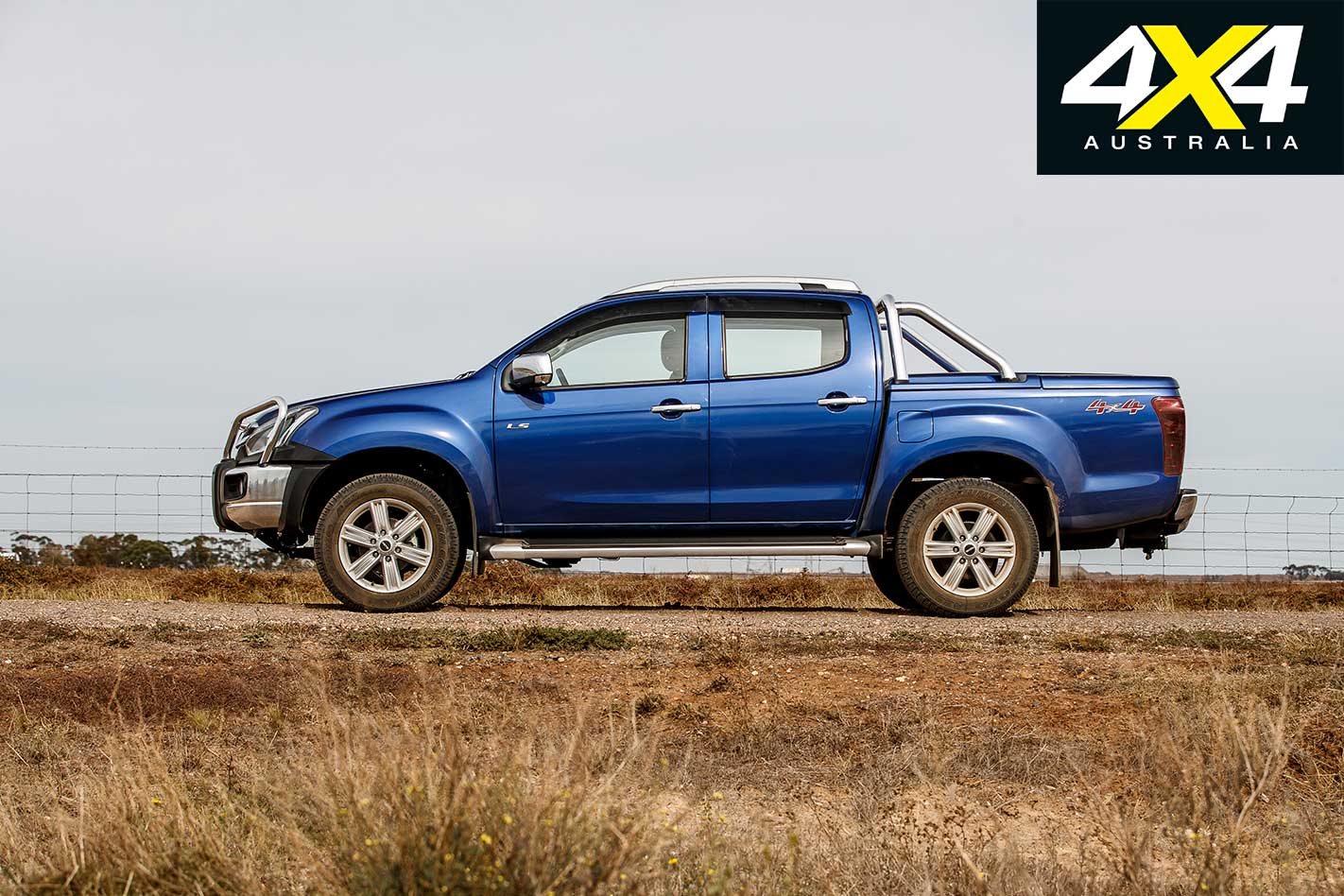 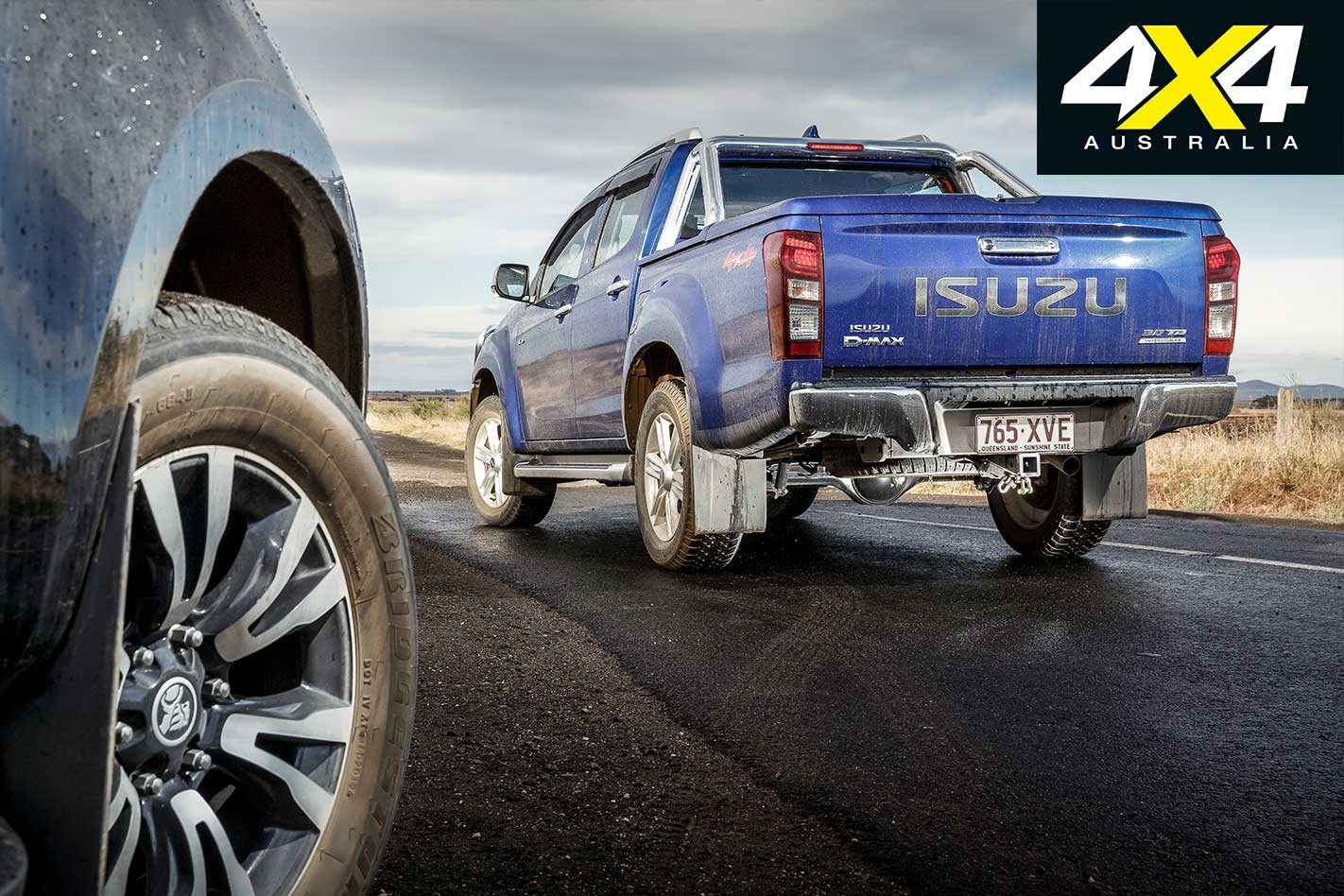 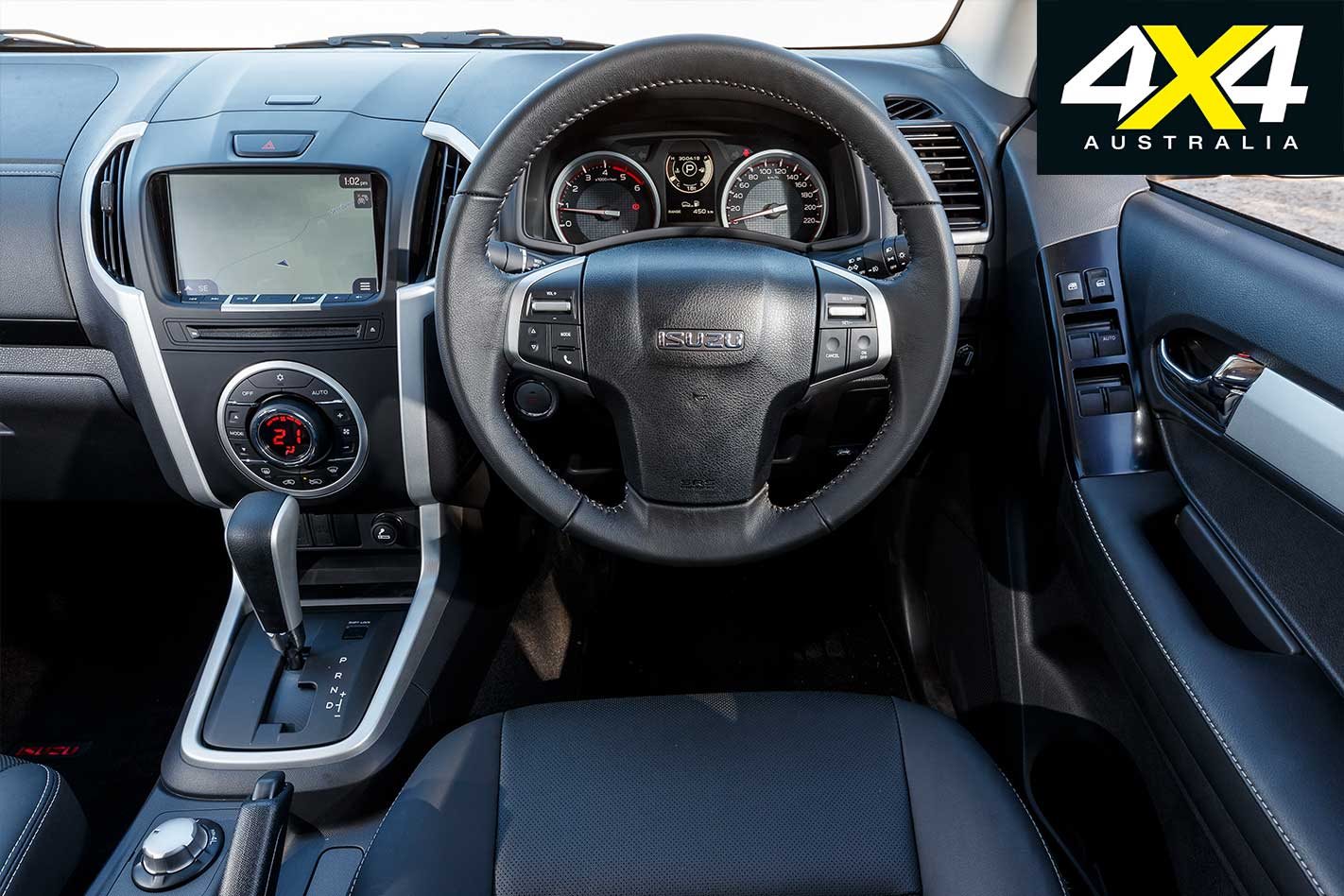 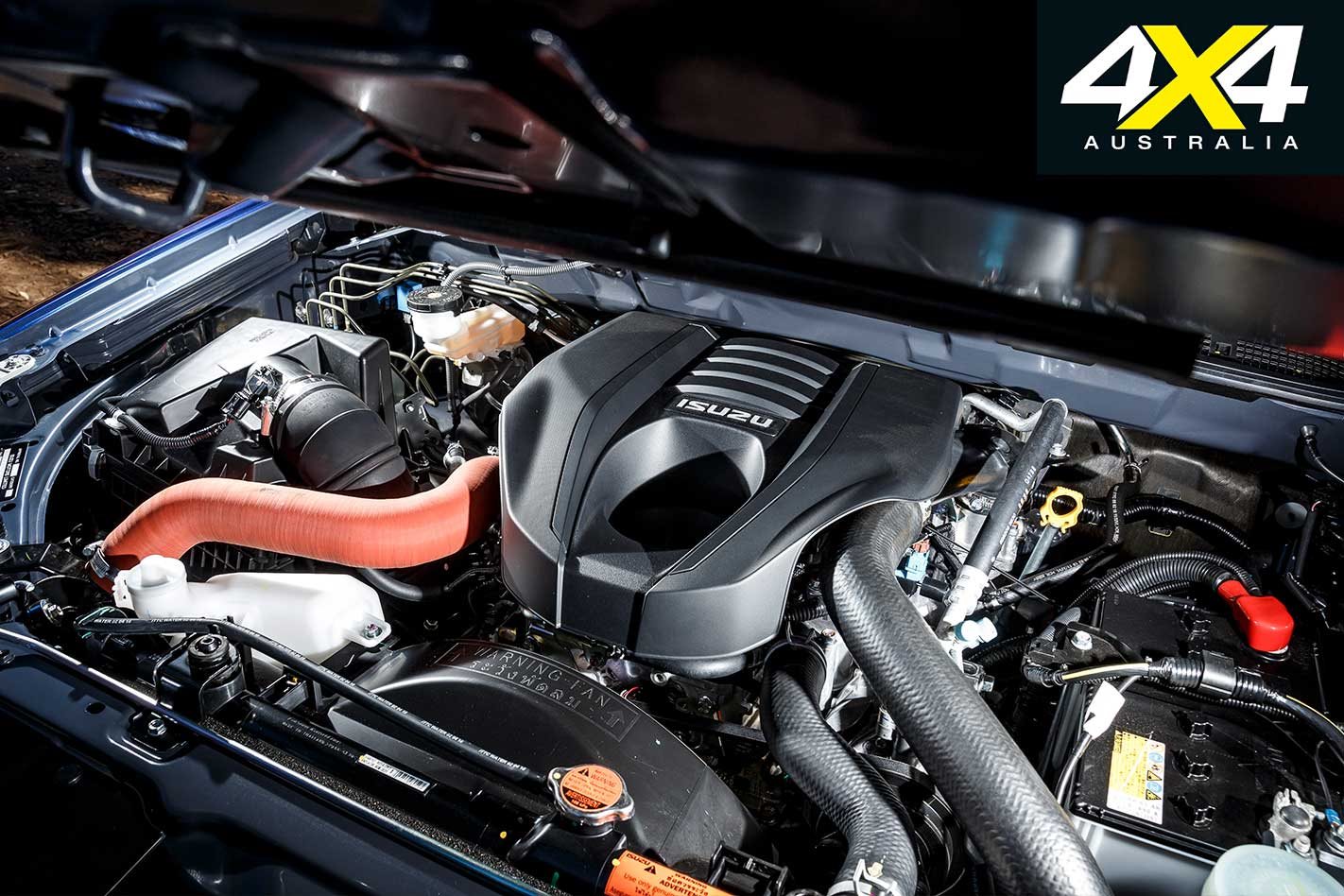 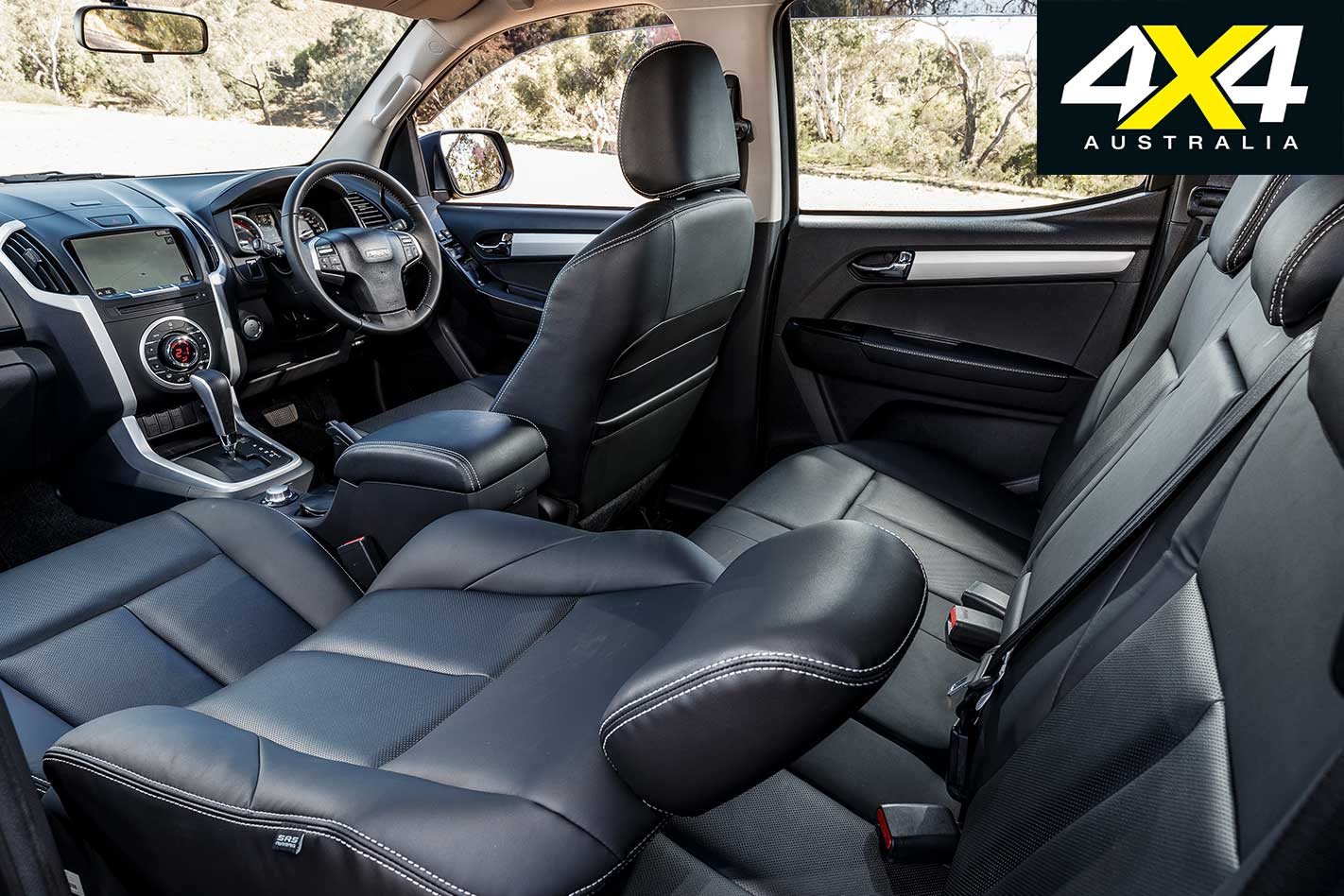 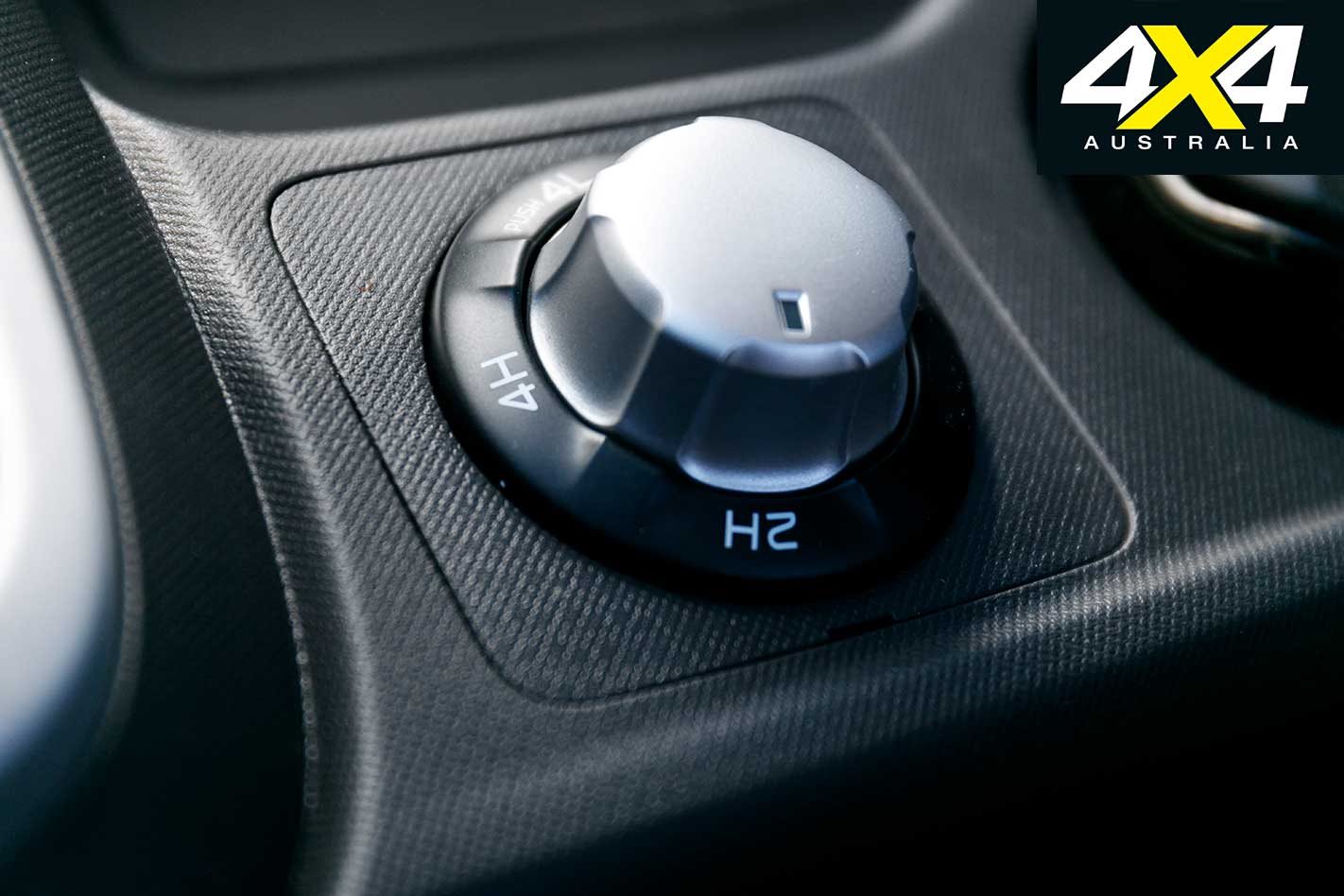 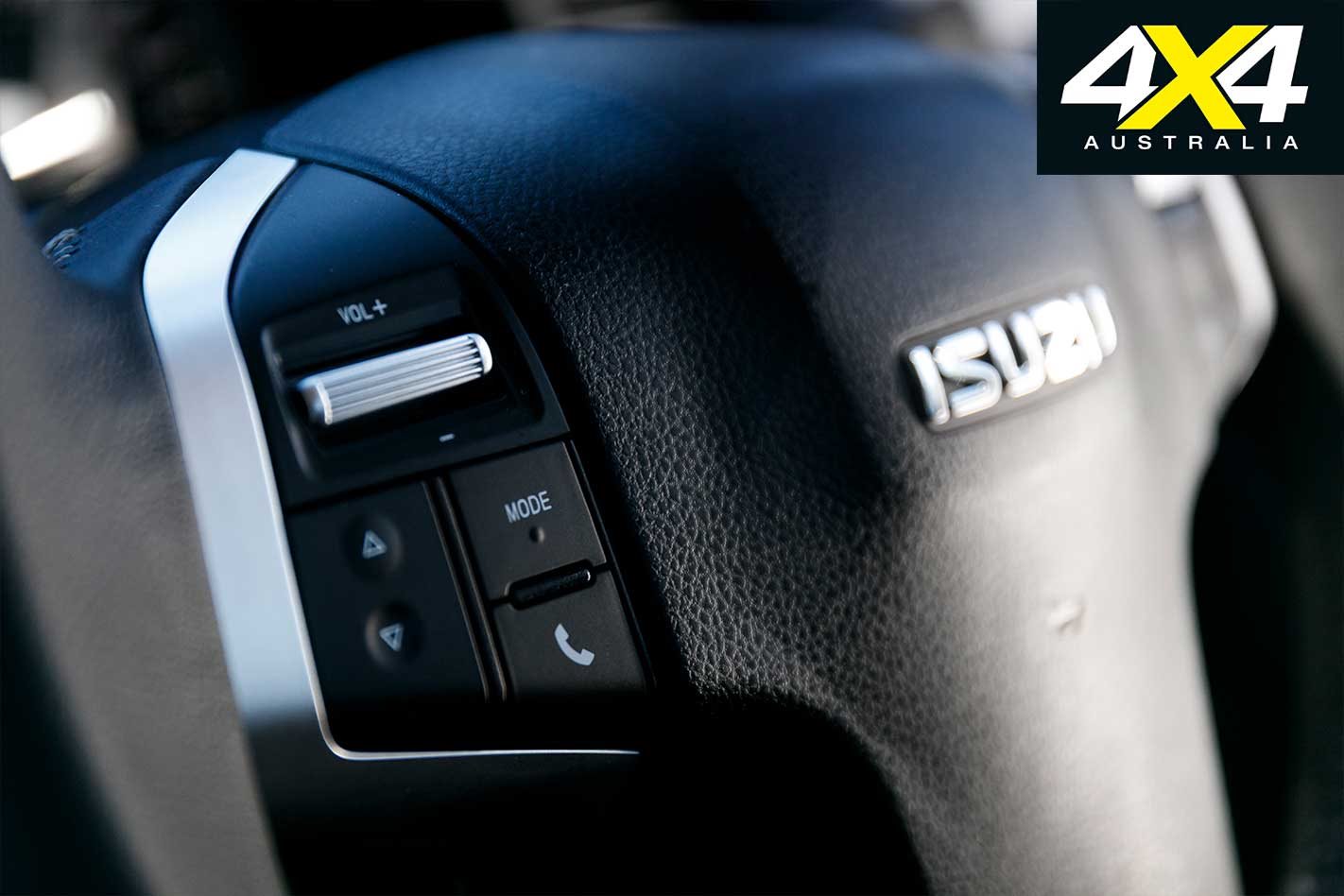 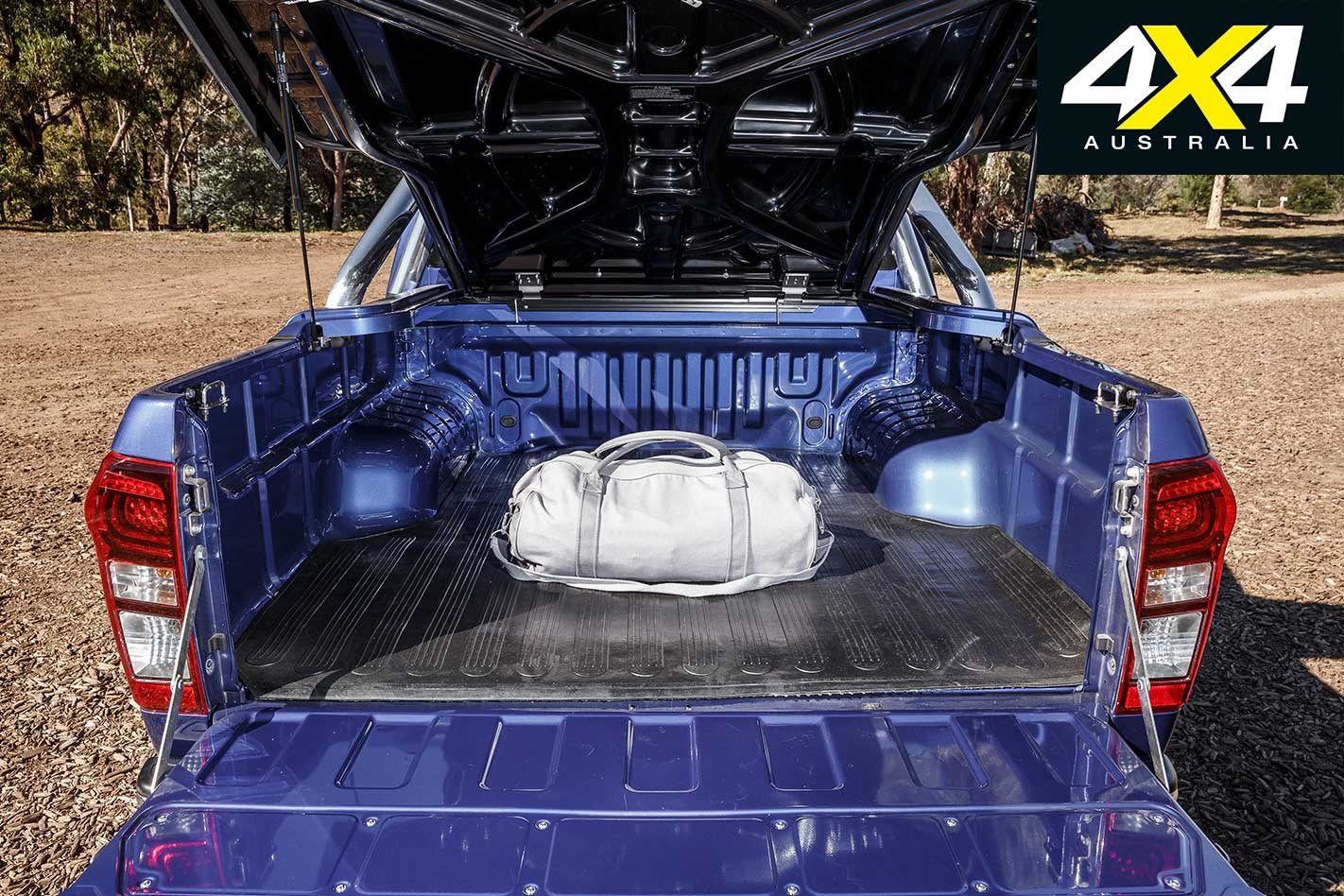 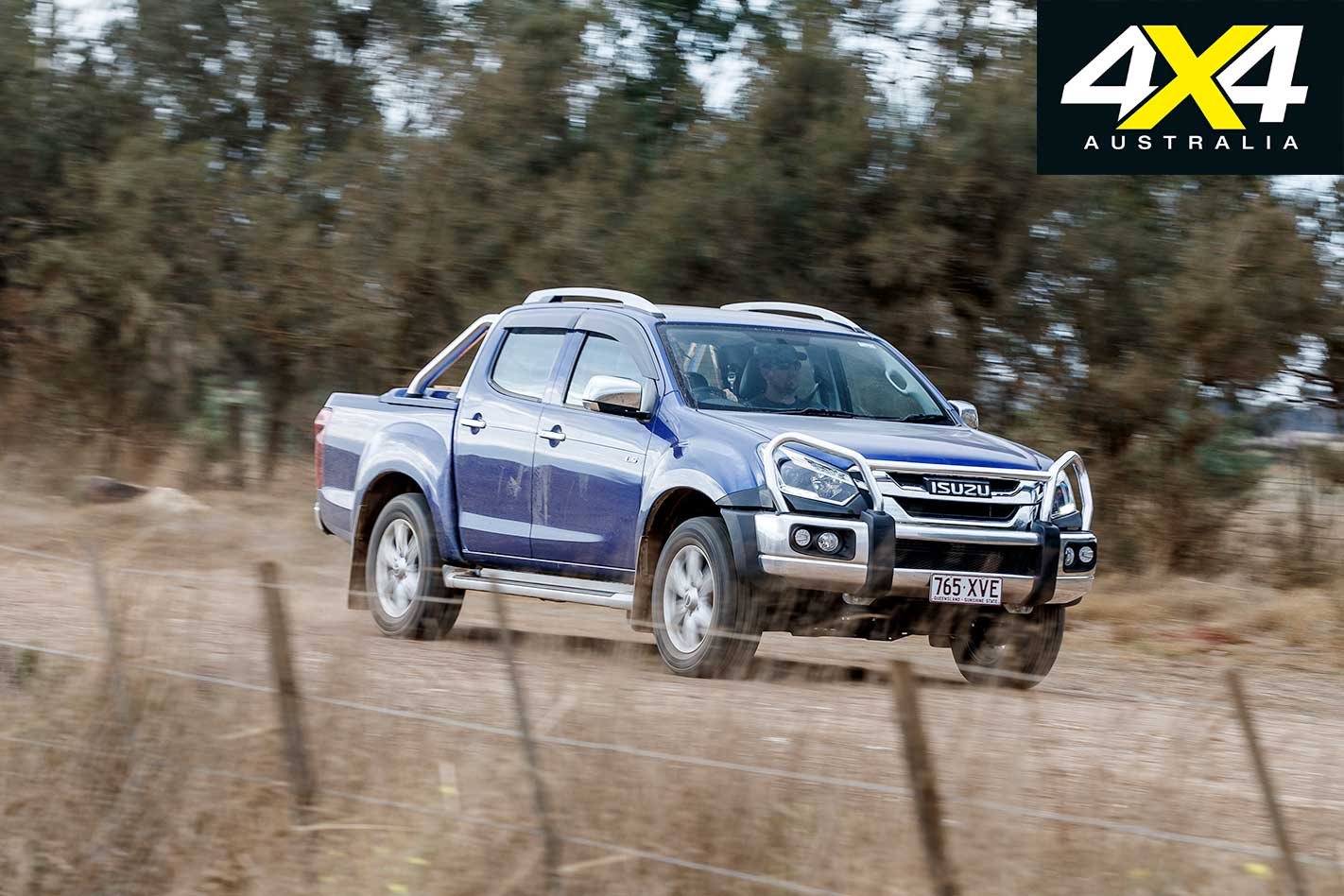 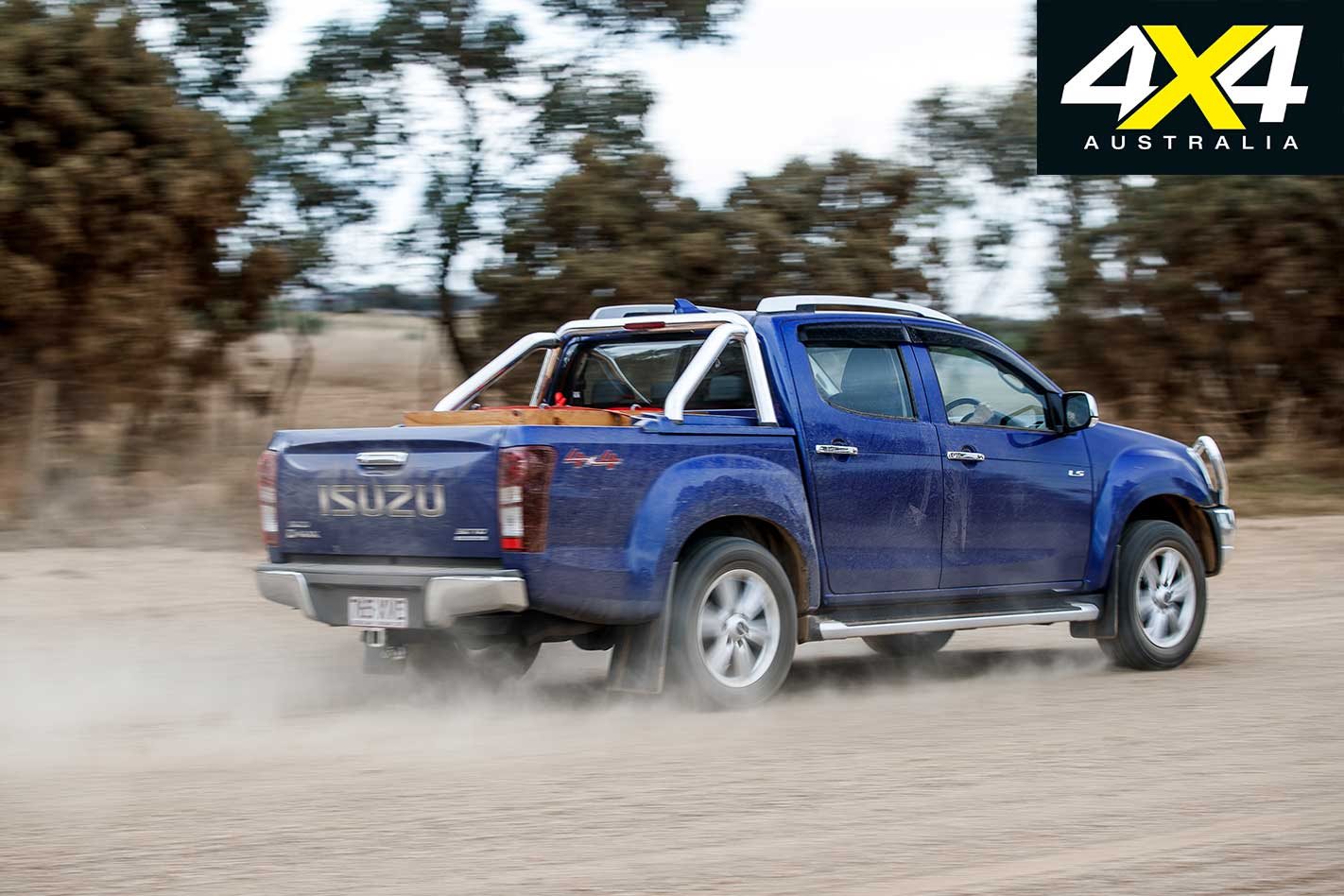 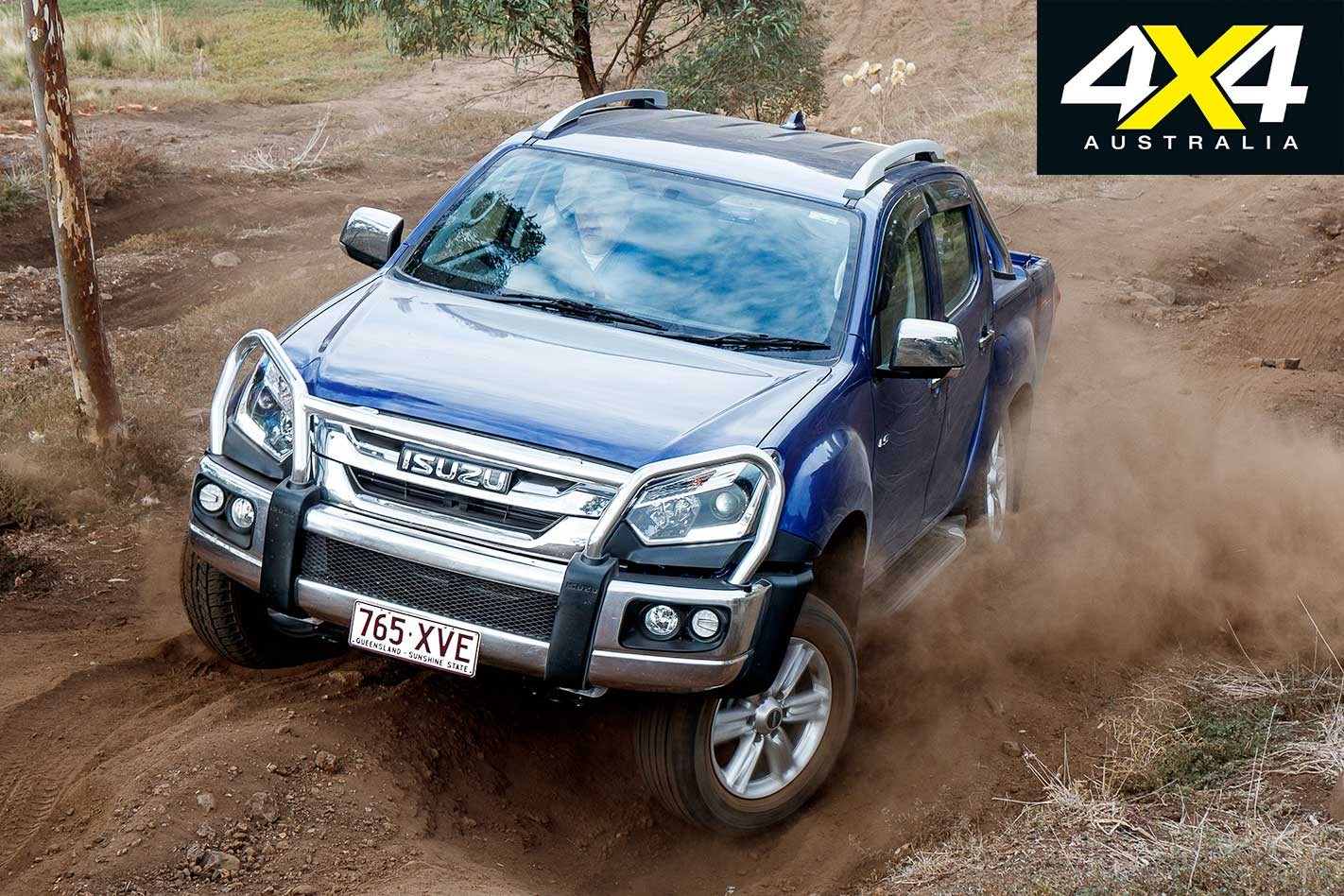 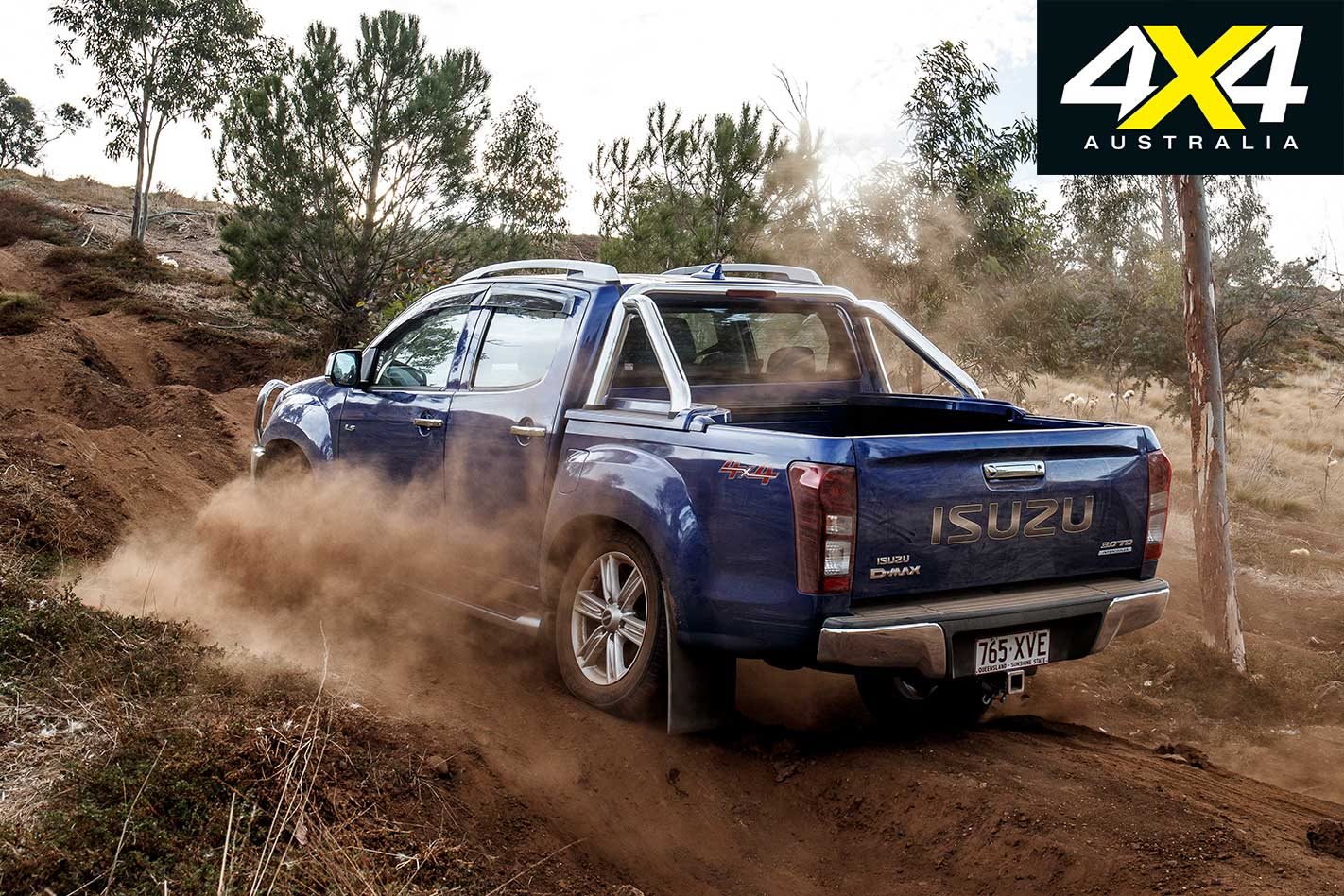 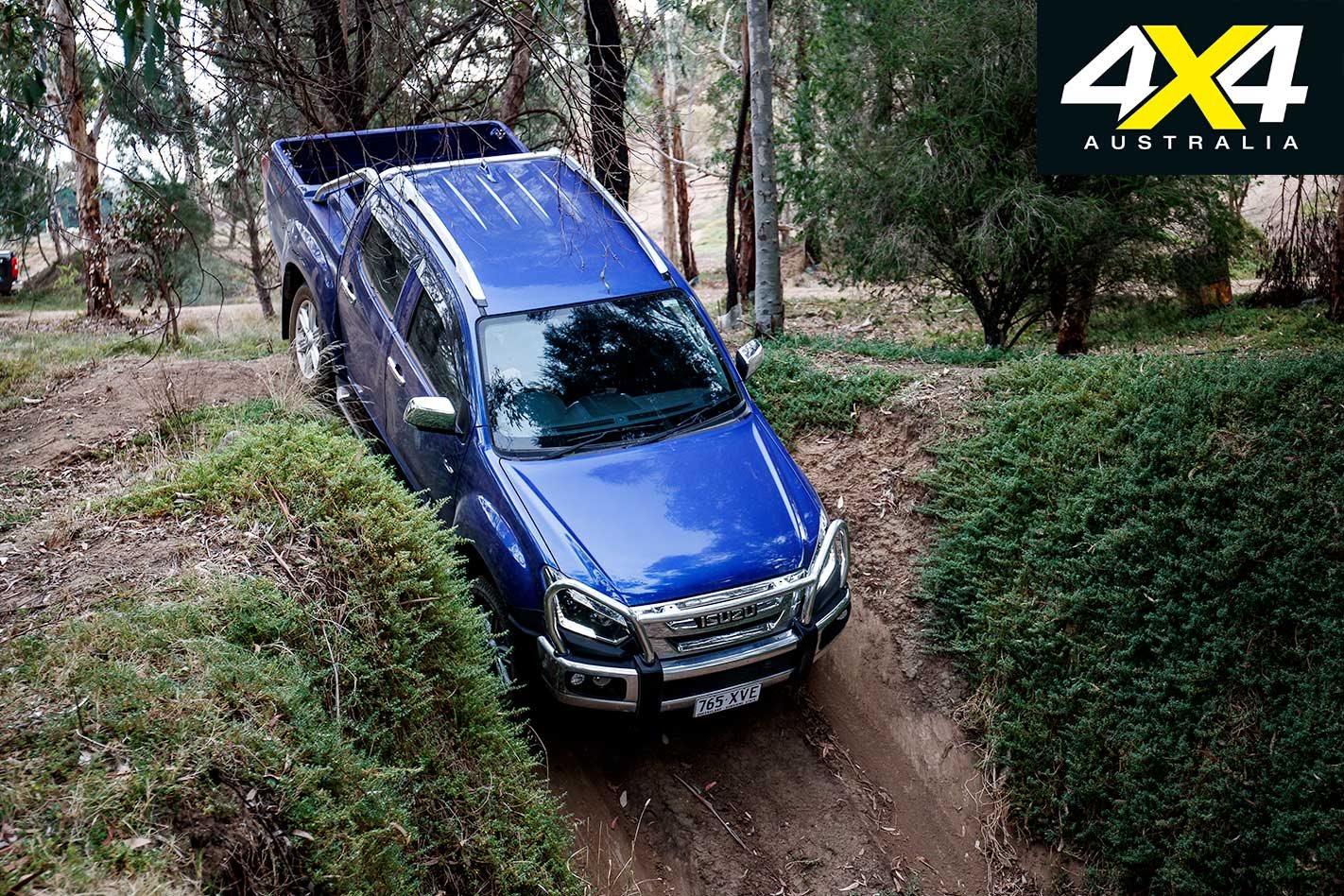 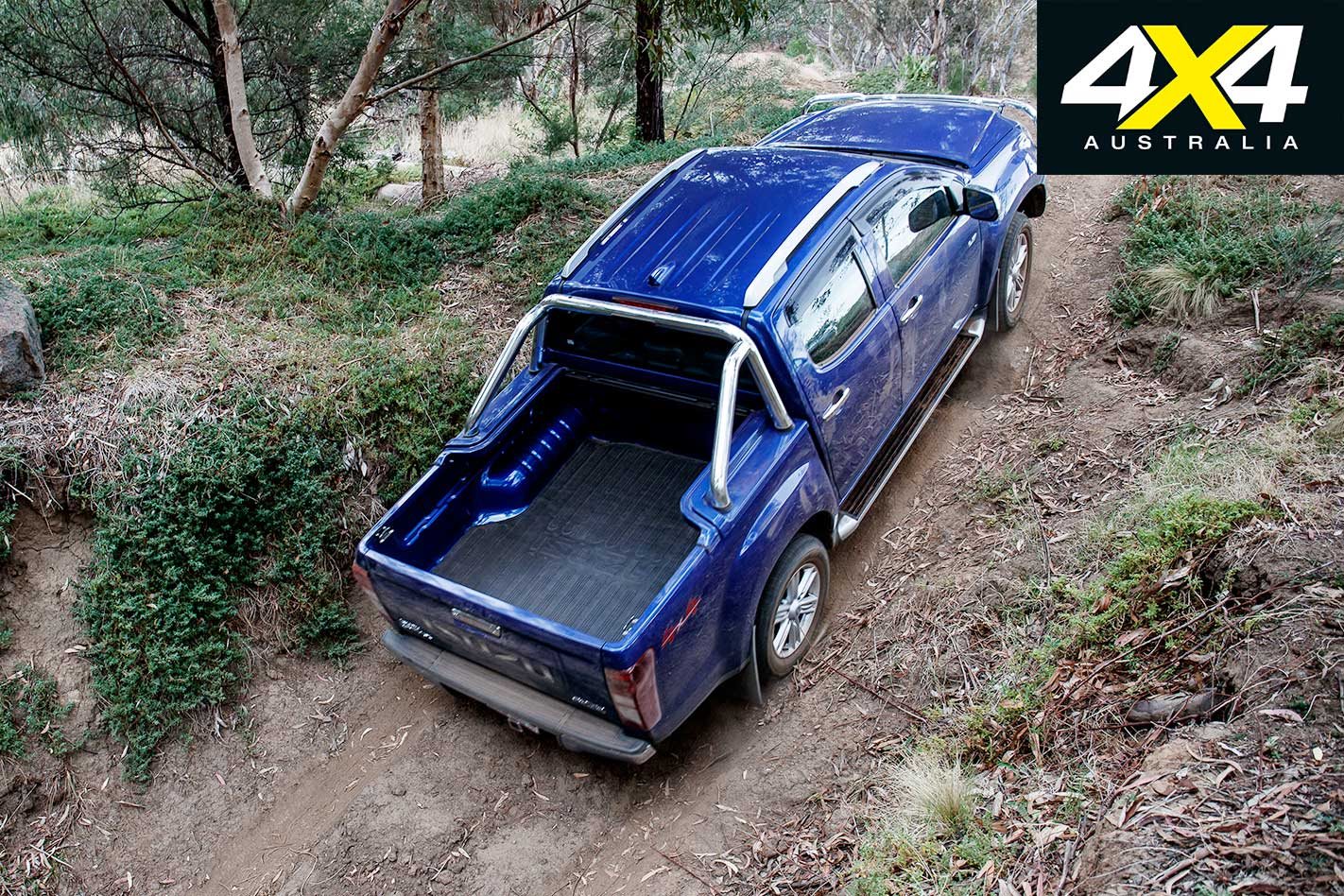