THE Sportline is the least expensive offering in the Amarok V6 range and joins the Highline and the Ultimate in what is now a three-model V6 line-up.

Compared to the Highline – previously the least expensive way to get into an Amarok V6 – the Sportline loses the sat-nav, sidesteps, chrome sports-bar, tyre-pressure monitoring, bi-xexon headlights and LED daytime-running lights. But it also saves $6K in nominal price over the Highline and, with VW also throwing in on-road costs, it’s currently $55K driveaway. So it’s less expensive than the popular Ranger XLT or Hilux SR5 dual-cab 4x4s. For that money you still get dual-zone climate, front and rear parking sensors, a rear-view camera, Apple CarPlay, four 12V sockets (including one in the tray), four-wheel disc brakes and 18-inch alloys. So it’s not exactly ‘work-spec’; although, it does gain 90kg in payload over the Highline thanks to losing the relatively heavy bits like the sports bar and sidesteps (see ‘On the Job’).

The centrepiece and defining element of the Sportline is, of course, its V6 engine. It’s the long-serving VW family engine that’s been strengthened and detuned for use in the Amarok. But detuned is a relative term here as it still makes up to 180kW, which places it well ahead of competitor utes. Pedal to the metal it leaves Hilux (130kW) and even Ranger (147kW) in its dust, helped in part by the relatively close ratios of the slick-shifting eight-speed. All the while the V6 is smooth, quiet and refined, as you’d expect of an engine that’s also used in luxury and prestige brands like Audi and Porsche. And while the 180kW is claimed on overboost from the default 165kW, the power delivery is totally seamless and predictable at all times. Full-time 4x4 also helps in getting the power effectively and safely to the ground on any traction-compromised surface. The power isn’t lost either, on a chassis that offers benchmark on-road dynamics.

The Amarok Sportline may be a big ute (wider even than Ranger/BT-50) but it feels nimble and agile and is definitely the most engaging on-road drive among the current crop of 4x4 utes. But the fun doesn’t end there, as the Sportline works brilliantly off-road – up there with Hilux and Ranger – and even without low-range gearing outperforms most other utes, all of which have low-range.

Best of all, the Sportline, like all automatic Amaroks – even the four-cylinder models – can go from the highway and straight onto a gnarly climb without touching a button or a lever, as it’s already in 4x4 and there’s no low-range to select. 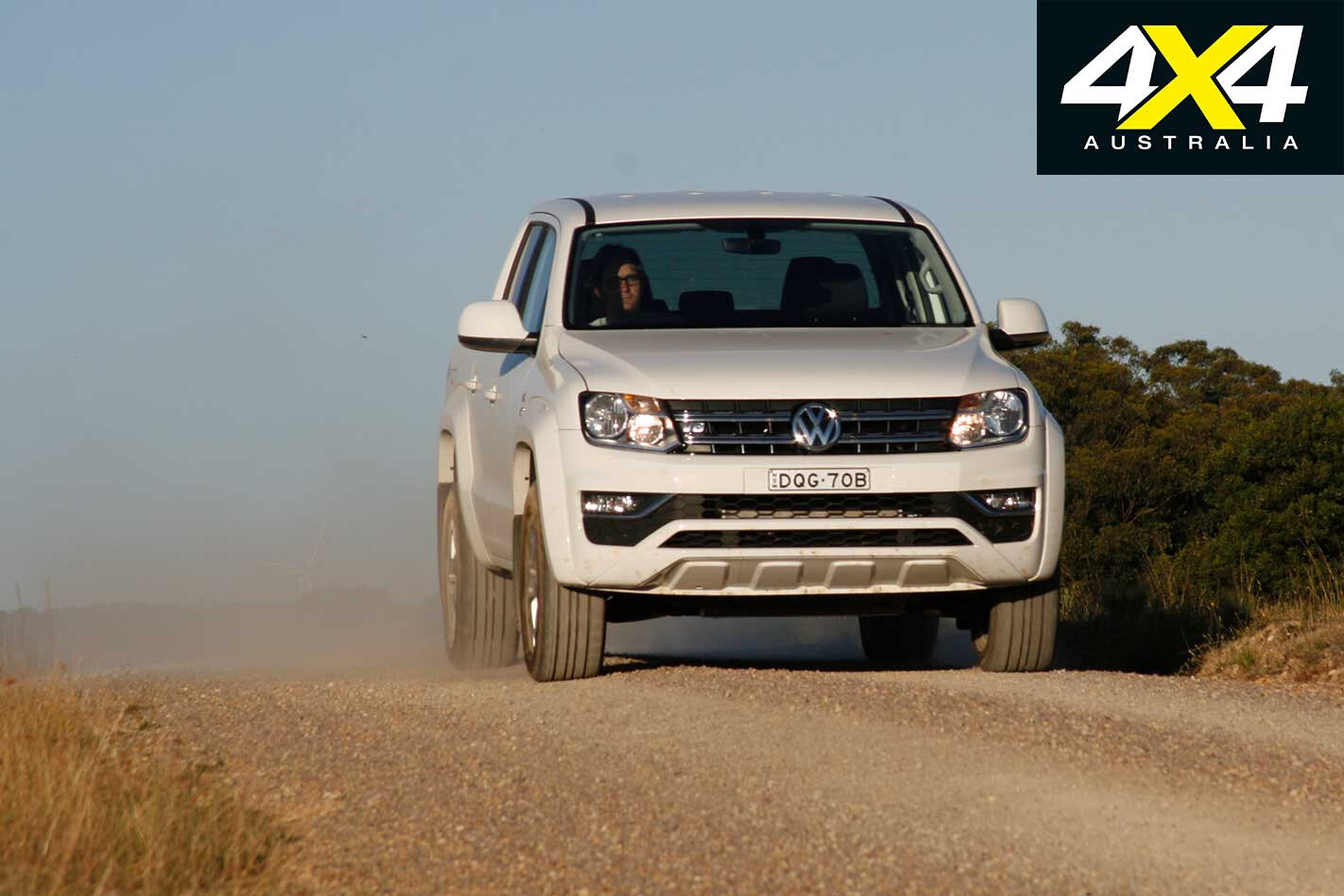 Like all Amaroks the Sportline has a wide and comfortable cabin – most notable is the rear-seat shoulder room, but there’s a lack of rear cabin airbags – while all V6 models are now rated to tow 3500kg and have a 6000kg GCM, both best-in-class figures. AN integral part of a ute’s role is to carry stuff, best tested by throwing a decent load on board (in this case, 800kg). We use 800kg as the standard test weight for utes, as 800kg is more or less the maximum you can legally carry in a tub of most current dual-cabs, given the weight of the driver and passenger and any accessories fitted.

The Sportline has the highest payload rating of the three Amarok V6s (1002kg), but 800kg plus 160kg for driver and passenger means you’re close to maximum payload.

Loading the Amarok up with 800kg is made especially easy as it will take a standard pallet between the factory tub’s wheel arches. Large and well-located tie-downs then make it easy to lash the load down. With the load on board, the Sportline settled around 65mm at the rear axle line. On the road the Sportline felt secure and stable. Sure, you can sense there’s a decent weight in the tub, but the steering didn’t feel noticeably lighter and remained reassuring, even at highway speeds on less than perfect country roads. Nor did the rear suspension bottom out over the bigger bumps.

No problem, either, with the engine’s ability with that payload, even on hills. The V6’s solid 550Nm that’s on-stream from just 1500rpm means it hardly felt the weight at all.

A big thanks to Taralga Rural for their invaluable assistance with the 800kg payload test.