From the 4x4 proving ground in Werribee to the Vic High Country, here are the trails we toured for the 2021 4x4 of the Year.

OUR annual get-together for 4X4 Of The Year may have been delayed a little because of COVID restrictions, but when it finally happened in the first week of February, we started out, as normal, at the Melbourne 4x4 Training & Proving Ground in Werribee.

It’s a top spot to put the vehicles through a set of fixed obstacles, where you can compare each and every vehicle’s performance and capability over a standard course. After a few hours spent driving up steep hills, through a series of steps and obstacles, as well as across fast-flowing but shallow creeks, the vehicles were already settling into some semblance of hierarchy as far as four-wheel drive ability was concerned. 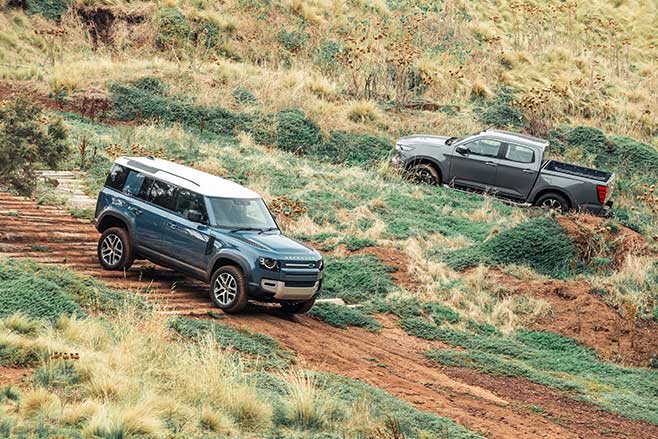 Day two saw us head east on the blacktop to Moe and into the mountains and the Moondarra Reservoir, finding our way to Coopers Creek and an easy crossing of the Thomson River. From there we climbed the range, taking the Maiden Town Track along the ridge above the historic mining settlement of Walhalla.

2021 4X4OTY: How the Hilux conquered all-comers

Meeting with the Binns Road we pushed north on this good gravel road to the old townsite of The Springs and on to the Burgoyne Track, for the steep but relatively easy descent to cross the Macalister River in the Macalister Gorge Natural Features and Scenic Reserve. This is an impressive spot with a couple of cracker camps, but we had already slipped behind on time so we pushed on, the climb out of the Macalister River valley being a bit of a scramble in places. 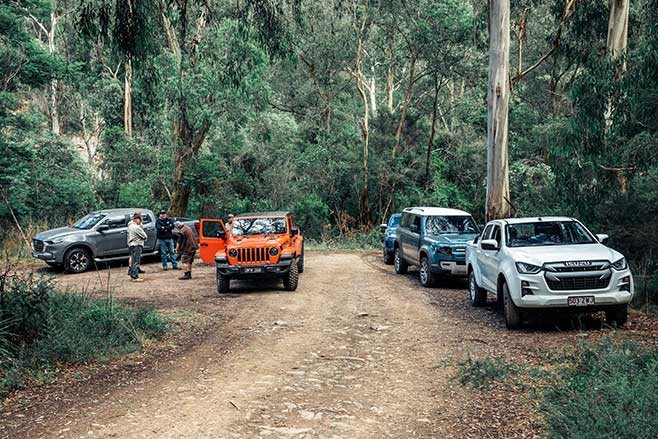 The all-new Defender was setting the pace by now, both on-road and in the tougher off-road sections, but the Jeep Gladiator wasn’t far behind. And of the other three vehicles in the test mix – more conventional dual-cab utes – the new Hilux was pulling ahead of the similar Mazda BT-50 and Isuzu D-MAX.

On the Licola Road we turned north into the mountains, bypassing Licola and taking the Tamboritha Rd to Tamboritha Saddle, where we threw down the swags for the night.

It was a disappointing start to day three when the BT-50 didn’t start. After an hour or so of fault-finding and mucking around, all to no avail, the catering crew stayed behind and organised a recovery for said vehicle. 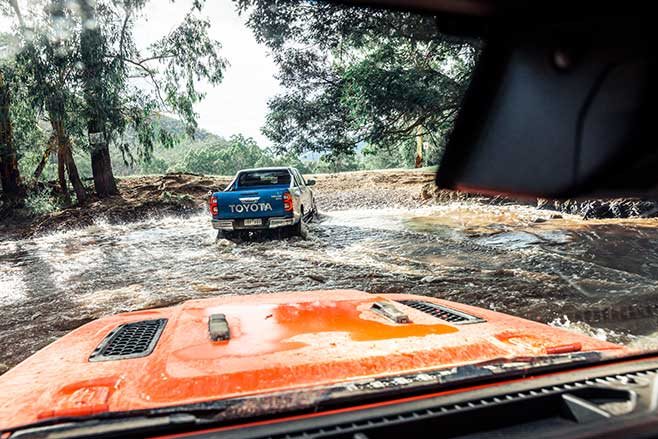 Our now depleted group of four vehicles under test – along with our video and camera crew in the magazine’s long-term Musso, which was pretty jam-packed with three young fellas and a heap of photographic and video gear – headed off along the Dingo Hill Track.

This route starts off easy enough but after crossing a mountain stream on a relatively new concrete bridge, the route gets more challenging, dropping through several switchbacks to the Caledonia River.

We splashed across the river a few times at a series of shallow, rocky fords before taking Butcher Link Track over a steep, rocky ridge to the acclaimed Butcher Country Track. From the track junction it’s a 22km drive to Howitt Plains Road, the route clinging to the ridge line as it descends some steep sections only to scramble upwards again to another high point. 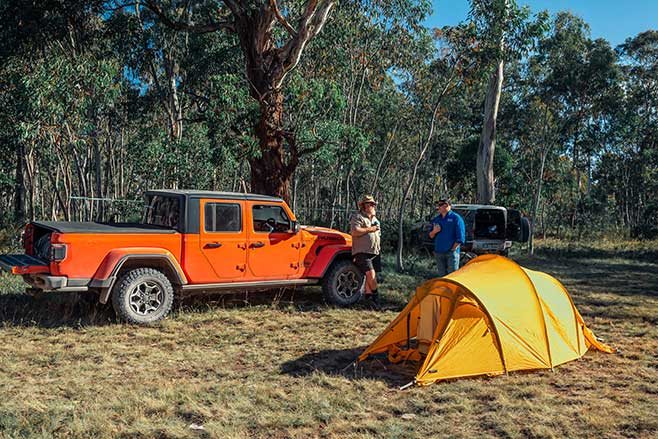 Meeting up with our catering crew at Howitt Hut, the daylight was slipping away as we took Moroka Road to the top of one of the most famous and at times challenging tracks in the High Country – the Billy Goat Bluff Track. This is a beauty, offering some of the most exposed and challenging driving in the entire mountains, whichever way you choose to drive it! While downhill may be less demanding than scrambling upwards, the expansive views over the bonnet, along the narrow ridgeline with sheer drops on each side and across the steep-sided valleys and the distant ridgelines and high peaks, is truly unforgettable.

That evening we set up camp on the grassy flat beside the Crooked River at Kingswell Bridge, the night being much milder than our previous camp at the much higher Tamboritha Saddle.

By now the petrol-powered Jeep and Land Rover were running on fumes, taking some fuel from a generator before heading along the Crooked River Road to Dargo where we stopped for fuel, a pie and a coffee. Then, with full tanks, we climbed to the Dargo High Plains and took the scenic drive out to the Blue Rag trig point. 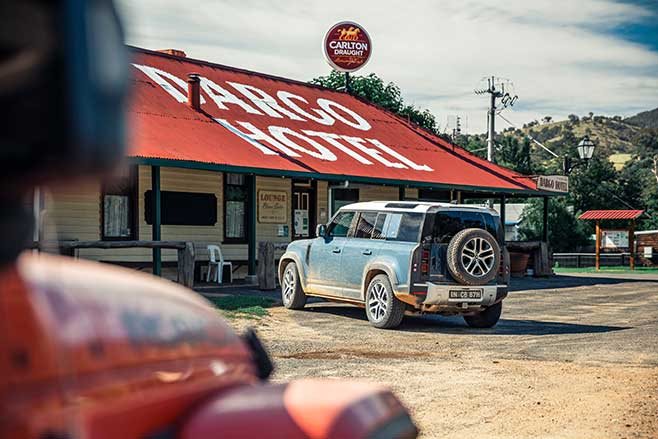 Along the way, the Jeep – with the best off-road rubber of any of the vehicles – picked up a puncture through the tread, so we stopped to plug the leak and were soon on our way again. The lesson being that there is always a bit of luck, or lack of it, regarding punctures!

Blue Rag is one of the official ‘iconic drives’ in the Victorian High Country and, while the route wanders along a ridgeline for its entire length of seven kilometres from the Dargo High Plains Road, giving great views to the north and south, the view from the trig point is even better and more expansive, taking in 360 degrees of mountain splendour! The route is steep in places, with a few scrabbly sections thrown in to keep you on your toes as you get close to the highest point.

Time was again our enemy and our planned camp that evening at Lake Cobbler was way too distant, so we backtracked and took the Basalt Knob Track south to the now burnt-out remains of Basalt Knob Hut. This old hut had been a bit rough around the edges for a few years, having been made out of an old cooler-box railway carriage, but the recent fires that had scoured much of this area (again) in 2019 had seen its total demise. 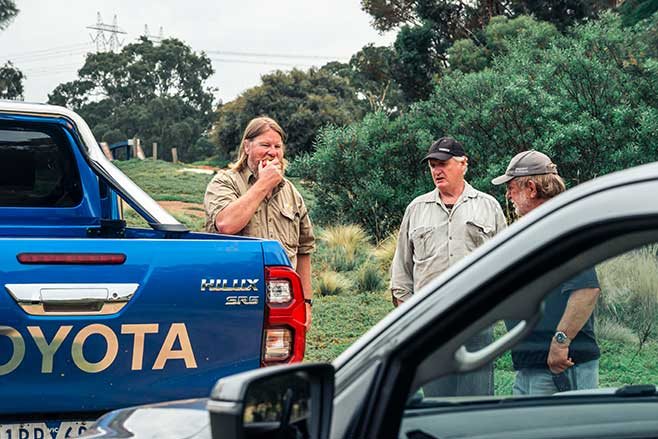 From there we took Ritchie Road to Brewery Creek Track where the now-steep hills, cleared of any intervening scrub, allowed uninterrupted views off the edge of the road down near-sheer drops to the creeks below. We’ve driven this route a fair few times but have never felt so exposed before, especially where the track narrowed to a point that the driver’s side wheels were just millimetres from the edge. After some steep descents we reached the bottom and crossed the Crooked River into the old townsite of Talbotville, where we made camp for the evening on the southern edge of this large, grassy flat. It’s a top spot popular with many and it’s one we always enjoy.

On day five it was a short drive with a few river crossings along the Crooked River Track that brought us to Kingswell Bridge, where we turned along the good gravel road for our last dirt-road section before meeting with the Bairnsdale Road south of Dargo.

The trip was nearly over but the judges had to burn the midnight oil, assessing their scores and writing their reports while the film crew retreated to their edit suites to cut a video of our testing times in the Victorian High Country. But it was worth it! 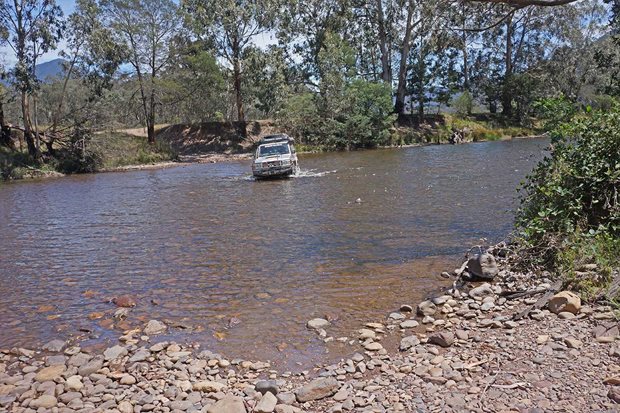 The Vic High Country is haunted by strange disappearances, both old and new.