This article was originally published in the February 2015 issue of 4X4 Australia.

Is the luxurious Rangie really worth eight Jimny Sierras? Can Jeep’s latest Cherokee compete with more off-road focused 4x4s and how does a 10-year-old HiLux get a guernsey among the latest and greatest vehicles?

4X4 Australia’s 4X4 Of The Year pits the best 4x4 vehicles of the year not against each other, but against a set of criteria that allows us to evaluate the cheap and cheerful against the rich and refined; the workhorse alongside the weekend warrior and the off-roader against the all-roader.

2014 delivered a small and mixed bag of new and updated 4x4 vehicles; some of which have been around in one form or another for many years, while the Jeep KL Cherokee is the only all-new model release of the year. Most other years we test the pick of the crop of new and updated vehicles, but for 2014 this is it. There was nothing else worth mentioning. 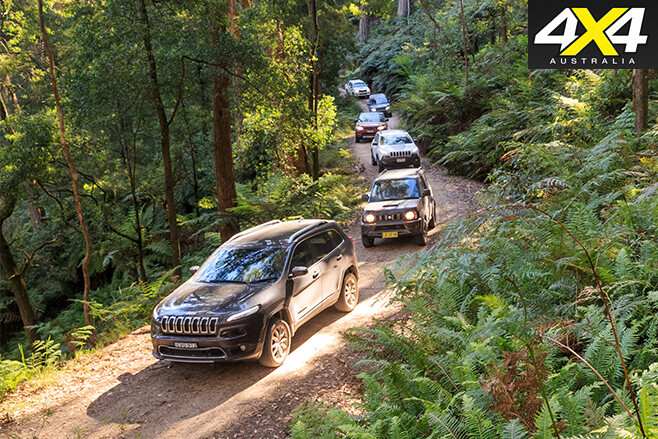 To be included in 4X4OTY a vehicle must be new, like the Jeep, or significantly updated. In the case of the Land Rover and Range Rover the updates include new engines. For the aging HiLux updates amount to a new auto transmission and a five-star safety upgrade. The Jimny received life-saving chassis tech which allows it to be sold in Australia once again.

Facelifts and new model variants like the Prado Altitude – with its underslung spare wheel and reduced fuel capacity that we consider to be a step backwards – don’t make the grade.

The vehicles that do get in to the final test are rated against a set of criteria. Do we need to say that again? The cars are rated against a set of criteria, NOT against each other. It seems some people have trouble understanding this but it’s this method of judging that allows us to rate the different types of cars, such as the Jimny, HiLux and Rangie Sport, alongside each other.

The long established 4X4 Australia criteria is:
VALUE FOR MONEY is judged according to a vehicle’s equipment level, safety features and price relative to its direct competitors. Just because a vehicle has a high price doesn’t mean it’s not good value, in the same way a cheap car isn’t always good value.

BREAKING GROUND refers to advancements in technology and design. How a vehicle has raised the bar in its class and taken 4x4s to a higher level. If a vehicle has the latest safety features, worthy engine technology or an advanced driveline, it will score well here. BUILT TOUGH refers to how strong a vehicle is and how well it will cope with the rigours of tough off-road driving environments. Will it be up to the task or fall apart at the first hurdle?

BUSHABILITY is how well-equipped a vehicle is for off-road travel. Suitability of the standard tyres for rough roads, touring range, available accessories, cargo capacity and underbody protection are just some of the factors considered here. Is this a vehicle you would chose to drive around Australia the rough way, or is it best left for the suburbs?

DOING THE JOB is judged according to a vehicle’s design brief. Does a luxury vehicle have all the latest in comfort and convenience features and do they work? How well a ute carries a load, or how comfortably a seven-seater accommodates a family will all come in to play here.

This year’s 4X4OTY test drive took us on a circuit around Victoria designed to take in the mountains, the bush, deserts and dunes. 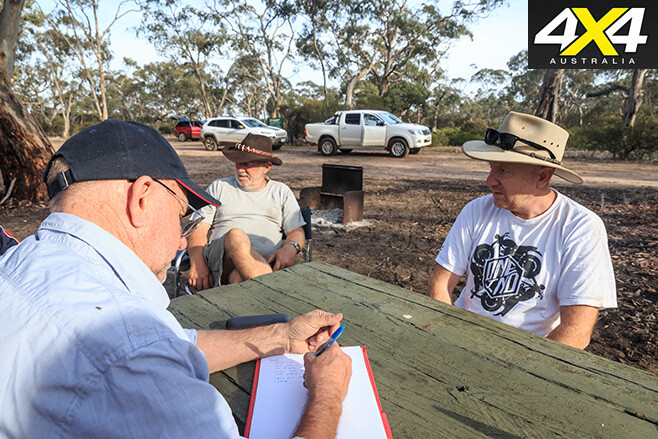 Snapper Ellen Dewer worked harder than the Energiser bunny, braving lightning storms, wind, rain, mud and dust to capture all the action on her Canon cameras, while Macca and Doc from Red Desert Catering kept us watered and fed in camp each day.

Read on to see where we went and what we learnt.

Our group, on board the six finalists for 4X4OTY, met just south of Wangaratta in north-east Victoria.

Here, we fuelled up and headed south on the freeway before striking west on a series of back roads. These back roads varied from A-class bitumen to second-rate blacktop and had the vehicles rocking and rolling to their own peculiar beat. We found our first dirt road as we headed into the hills towards Mount Cole State Forest and the adjoining Mount Buangor State Park.

We pulled over every hour or so to swap vehicles; moving from the smooth luxury of the Range Rover to the more basic ride and decor of the Suzuki Jimny... and everything in between.

Higher in the mountains the tracks were dry from a lack of recent rain, and we soon slipped down a few narrower and steeper trails heading west to our overnight camp at Mugwamp Hut.

The following morning we were looking for something a little more challenging, so we headed north taking Hellhole Track and Switchback Track, amongst others. However, we eventually hit a hurdle and were turned around by active logging coups where they were using heavy machinery.

That happened twice, so we gave up and headed further west across more back roads to the Grampians National Park. We didn’t stop in Halls Gap but pushed on and crossed the Serra Range on the dirt of the Serra Road before taking the Goat Track up and across Victoria Range. 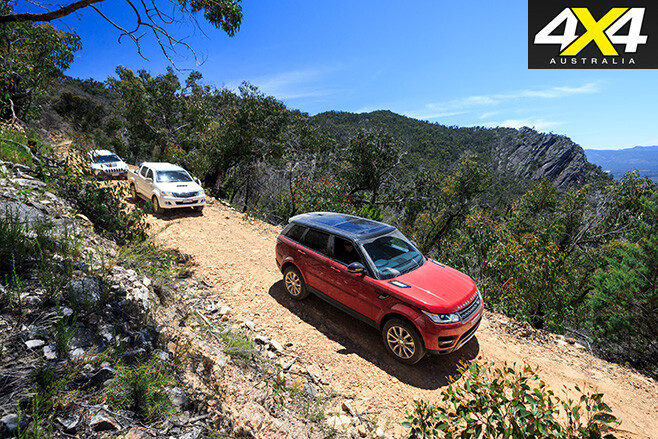 This rocky route was in pretty good condition, and while it was a great drive (one of the best in the Grampians where you’ll get away from the Commodores) it didn’t really stretch the four-wheel drive capabilities of any of the vehicles.

After leaving Goat Track we were soon on unmarked tracks through the remnants of the Billywing Pine Plantation. The open country attracted a host of wildlife including mobs of kangaroos, emus and even a couple of red deer. That night’s camp was on the southern edge of the Rocklands Reservoir.

The next day we headed into Little Desert National Park. The soft sand trapped a few of us as we bounced along Mallee Track, McDonald Highway and Sister Hills Track, to name a few. The whoopty-doos also got pretty aggressive at times and some of the vehicles started to feel it.

While the day had started off warm, by mid-afternoon dark clouds had gathered and dumped rain on us, firming the sand and making the clay sections run with water and thus very slippery. The dunes of Discovery Bay were the next port of call. So, after joining the Portland Dune Buggy Club (a prerequisite to driving in this large and fantastic sand dune area), we gave the vehicles a great workout in the steep dunes and soft sand. Still, we hadn’t really stretched the suspension travel, or the articulation, on any of the vehicles.

The last day of testing saw us beeline to the steep-sided gorge of the Werribee River, where the excellent 4WD facilities of the Melbourne 4X4 Training & Proving Ground resides. It didn’t take long to sort the contenders from the wannabes.

Our little circuit of western Victoria clocked up nearly 2000km on a variety of roads, tracks and soft sand. This made some vehicles shine, and others lose their lustre, which was the whole idea of the six days! JEEP CHEROKEE DIESEL LIMITED
Jeep’s new and very different Cherokee is offered in a five-model range, but only one is a diesel. 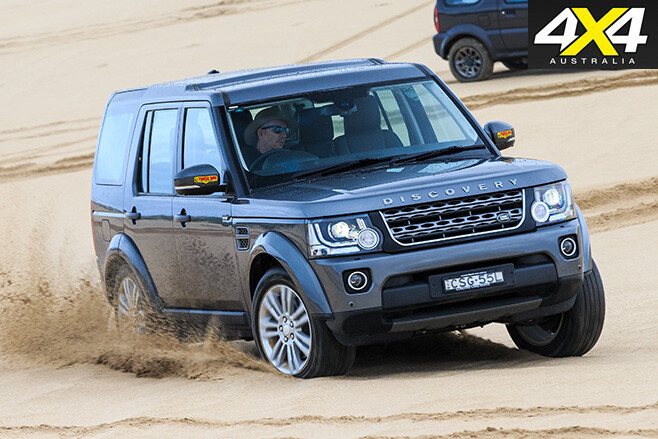 LAND ROVER DISCOVERY SCV6
No longer can you buy a Discovery with a petrol V8. In its place is a supercharged petrol V6. TOYOTA HILUX SR5 DUAL CAB
It may be in the twilight of its career but this seventh-generation HiLux has one last shot at the 4X4OTY crown. 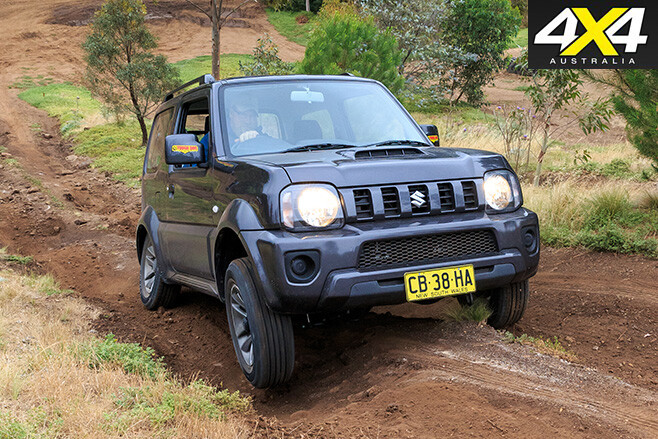 SUZUKI JIMNY SIERRA
Thanks to some significant re-engineering Suzuki’s diminutive Jimny Sierra has been given a second lease on life. 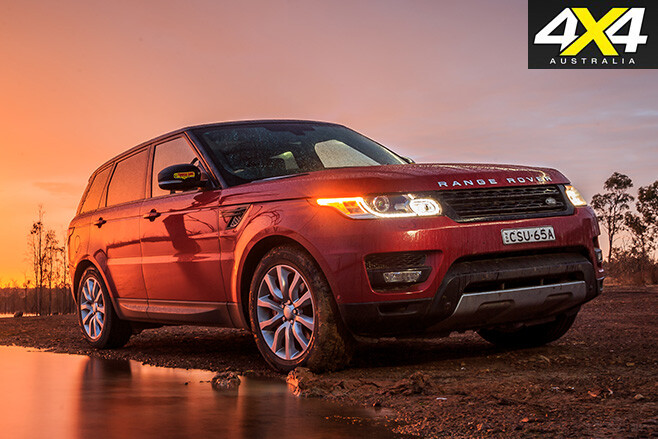 RANGER ROVER SPORT SDV8
The Range Rover Sport keeps getting better thanks to the addition of a bi-turbo V8 diesel. JEEP CHEROKEE TRAILHAWK
Unlike the other models in the new Jeep Cherokee range, the Trailhawk has real off-road aspirations.

It was a close call, but the Range Rover Sport SDV8 took out the title for 4X4OTY! This was a cliffhanger right down to the last vote. Votes dribbled in one at a time as the judges made their way home after the six-day, 1500km test and got down to the serious business of scoring the finalists against the criteria upon which the award is based.

All the vehicles were scored out of ten for each of the five criteria by the six judges. The judges’ scores were then tallied in a secret ballot. When it is close, each judge’s score can be critical, as it certainly was this year.

As the scores were tallied, two judges had the Discovery and two judges had the RR Sport in first place. And those that voted for the RR Sport placed the Discovery second, and vice versa. The final two judges’ scores would be critical; one judge had the Jimny and one the Trailhawk in the lead. What this meant was that the voting was a bit like a close government election where the ‘preferences’ would carry the day.

In the end it was the Range Rover Sport that just pipped the Discovery by a single point in what was one of the closest results in many years.

Both the Jimny and the HiLux did surprisingly well. The Jimny on the grounds of value and the fact that it always performed above and beyond expectation, and the HiLux because it’s just so practical and functional.

Both Jeeps unfortunately couldn’t hide their passenger-car background. One can only wonder what would’ve been the result if a diesel Trailhawk was available. It could be well have been the winner. 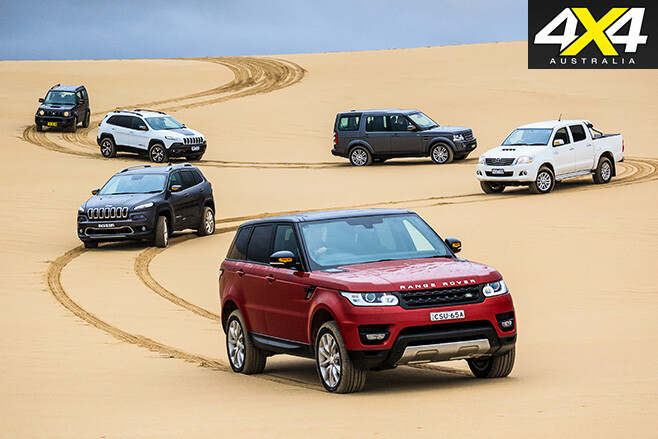 As much as the Discovery impressed on every level, the fact remains that the cheaper TDV6 diesel option is still the best engine in the Discovery range in terms of value and functionality. The supercharged petrol V6 may be a superb engine but it would be hard to pick it over the TDV6 or even the SDV6 unless you were a dedicated petrol fan.

Conversely, the SDV8 in the RR Sport is the best engine in the range, even if the supercharged petrol V8 is more powerful. You just can’t go past the SDV8’s intoxicating mix of performance, economy and refinement.

Combine that engine with a chassis that offers a broader spectrum of performance – from sports cars to serious 4x4s – than any other vehicle of the planet, and you have a more than worthy winner.