This is the fourth year Tough Dog 4WD Suspension has been the major supporter of 4X4 Australia’s 4X4 Of The Year (4X4OTY) award and the third time we’ve brought one of the company’s modified dual-cab utes along on the weeklong test.

We’d previously tested Tough Dog’s Toyota Hilux and Nissan Navara, but this year, Simon Vella, Tough Dog’s general manager and the man in charge of Tough Dog suspension development, brought the company’s modified Ford Ranger. This rig was equipped with a Tough Dog suspension set-up designed to carry a 0-300kg load in the rear, while the front-end set-up was equipped to handle the weight of a steel bullbar. Tough Dog offers three rear suspension packages for the Ford Ranger: 0-300kg, constant 300kg, and constant 500kg. The Ranger we tested on 4X4OTY was equipped with the 0-300kg rear leaf spring pack, which features a linear spring rate for improved ride quality, with a light load compared with the variable spring rate of the OE Ford suspension.

“We don’t run a second stage on the leaf pack,” explained Simon. “We run a primary pack only, so there’s no flat leaf on the bottom.”

The Tough Dog leaf pack is made up of single-cambered diamond-cut leaves that are specifically rated up to 300kg of constant load. The reason for eliminating the second stage (or load helper springs) is to keep the ride quality at an absolute premium. “When you drive this Ranger, even with the big wheels and tyres fitted to it, it’s plush and comfortable and not jarring at all,” Simon said. Unless you’re carrying a constant 300kg or higher load in the back, there’s really no need to fit a load-helper spring.

“When you introduce a secondary leaf on the bottom, when the primary springs come down and rest on that, the rate then starts to climb rapidly because you’ve hit a piece of flat steel,” explained Simon. “You can camber that leaf downwards, but only by so much before it becomes impractical (such as impeding ground clearance).

“With nearly all the 0-300kg dual-cab suspension systems we’ve developed over the last 10 years, we’ve deleted the load leaf because it doesn’t really serve a purpose. A lot of people who buy a dual-cab ute, they’re just going to chuck up to 250kg in the back, maybe a couple of dirt bikes, so there’s no real need to put a secondary leaf in the bottom.” Other features of the Tough Dog leaf spring kit include urethane bushes and friction pads between the leaves. 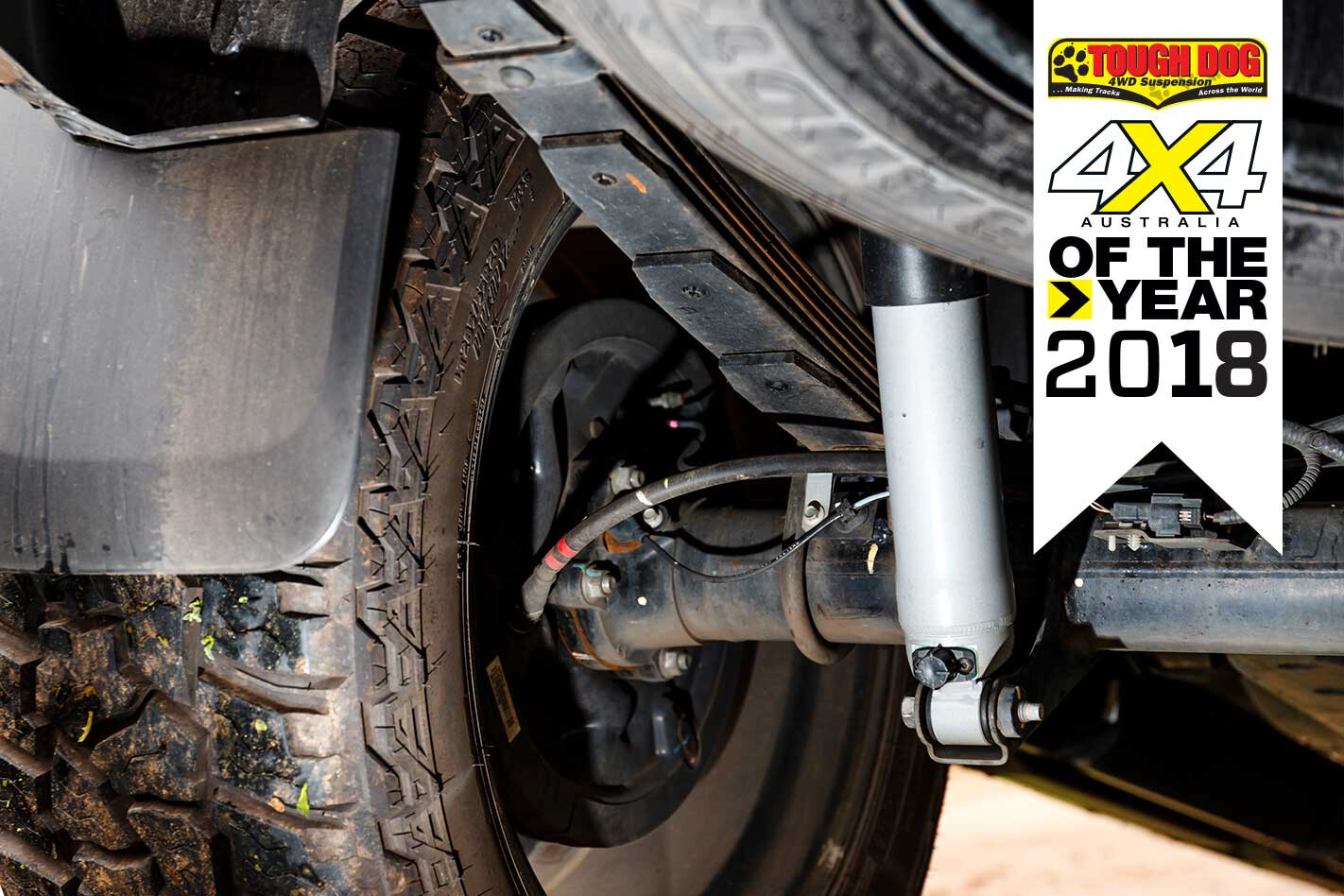 “With our adjustable shock absorbers, you’re essentially getting nine shock absorbers for the price of one,” Simon said, who encouraged the testing team to play around with the damper settings as road and track conditions changed.

The Ranger was only carrying a light load in the tray (around 200kg) on test and we kicked off on setting two, which provided a comfortable ride and good control on the highway. As road conditions deteriorated we upped the damper setting to five, which was achieved via a simple and easy-to-access rotary dial at the base of each shock absorber. This provided a noticeable increase in damping effect that improved control over bumpy terrain. While also resulting in a firmer ride, the lightly laden Ranger still felt comfortable over crook and bumpy back roads.

When we hit the rough and rocky off-road tracks around Eldee Station, we backed off the shock absorbers to setting two, which offered much more ride compliance.
So how do the Tough Dog adjustable dampers work? “You’ve got an inner working cylinder, where the piston runs up and down,” explained Simon. “That working cylinder, what replenishes it with oil is a valve that opens and closes. When the shock absorber closes the valve shuts and forces the oil through the piston, and then when it extends the valve opens, and between the outer tube and the inner tube a vacuum sucks the oil back inside again.

“By turning the adjusting dial, it turns a worm drive that restricts the oil flow…”

So when you turn up the dial, it increases both compression and rebound damping. “Around 80 per cent rebound and 20 per cent compression,” said Simon. “So if you take it to setting five, or up to setting seven, you can really feel the difference; it starts to feel quite firm.”

MOREnews and reviews on 4x4 gear 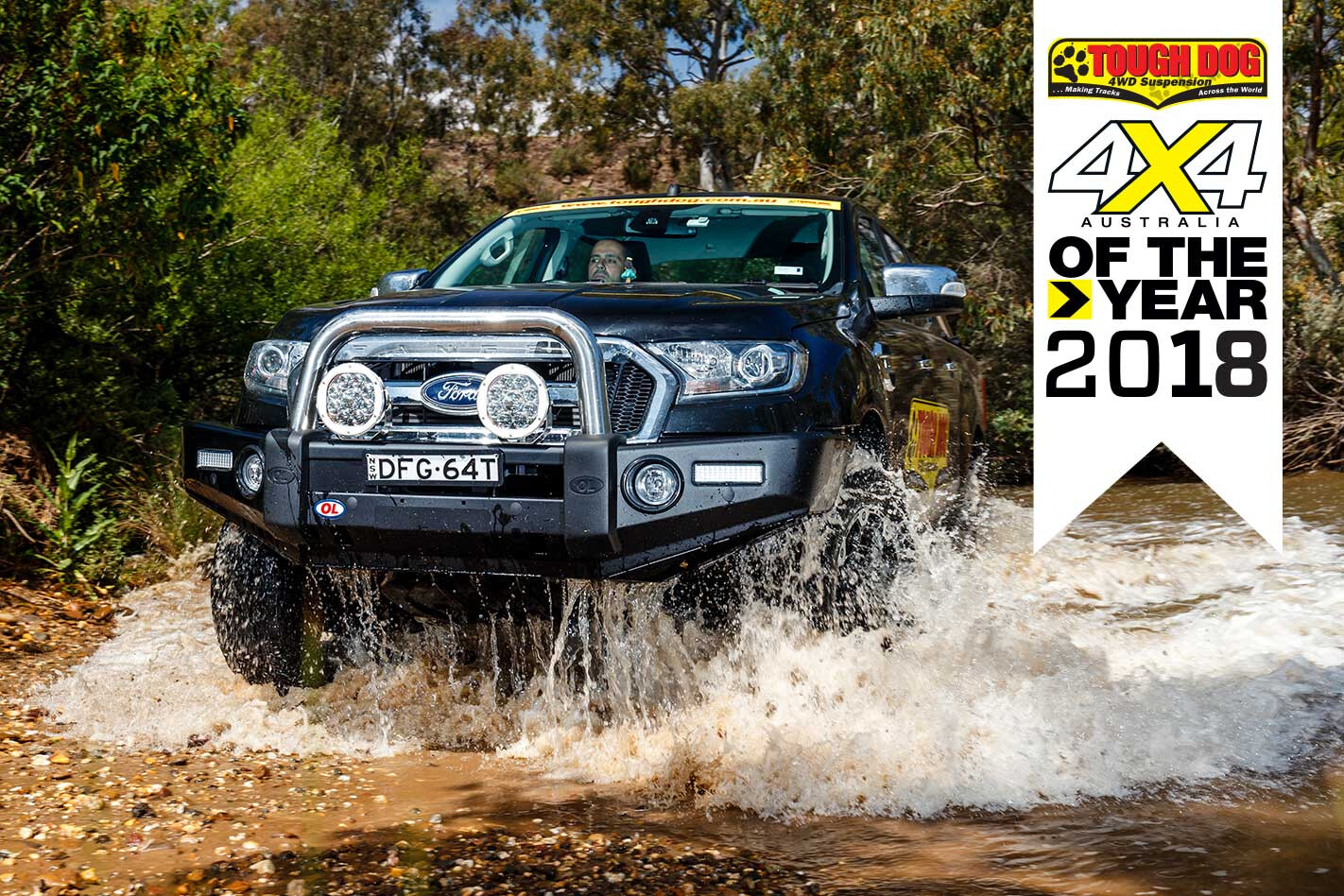 The front of the Tough Dog Ranger runs struts with 40mm foam cell shock absorbers. Tough Dog offers two front spring options for the Ranger and as this vehicle was equipped with a steel bullbar and driving lights, but no winch, it was equipped with the lighter option.

“It has a 40 to 50mm lift to suit a steel bar,” Simon said. “There are two front spring options. The first rate suits a vehicle with weight up to a steel bar, like this one here, and then we do a spring to suit a heavy bar with a winch.”

“It’s got 40mm foam cell shock absorbers, which are a similar design to the rear foam cells, the only difference being that the front shock absorbers don’t have an external valve, so they’re not adjustable.”

The springs and dampers can be purchased as separate items or the struts can be supplied completely assembled, which makes them a lot easier to fit to the vehicle. 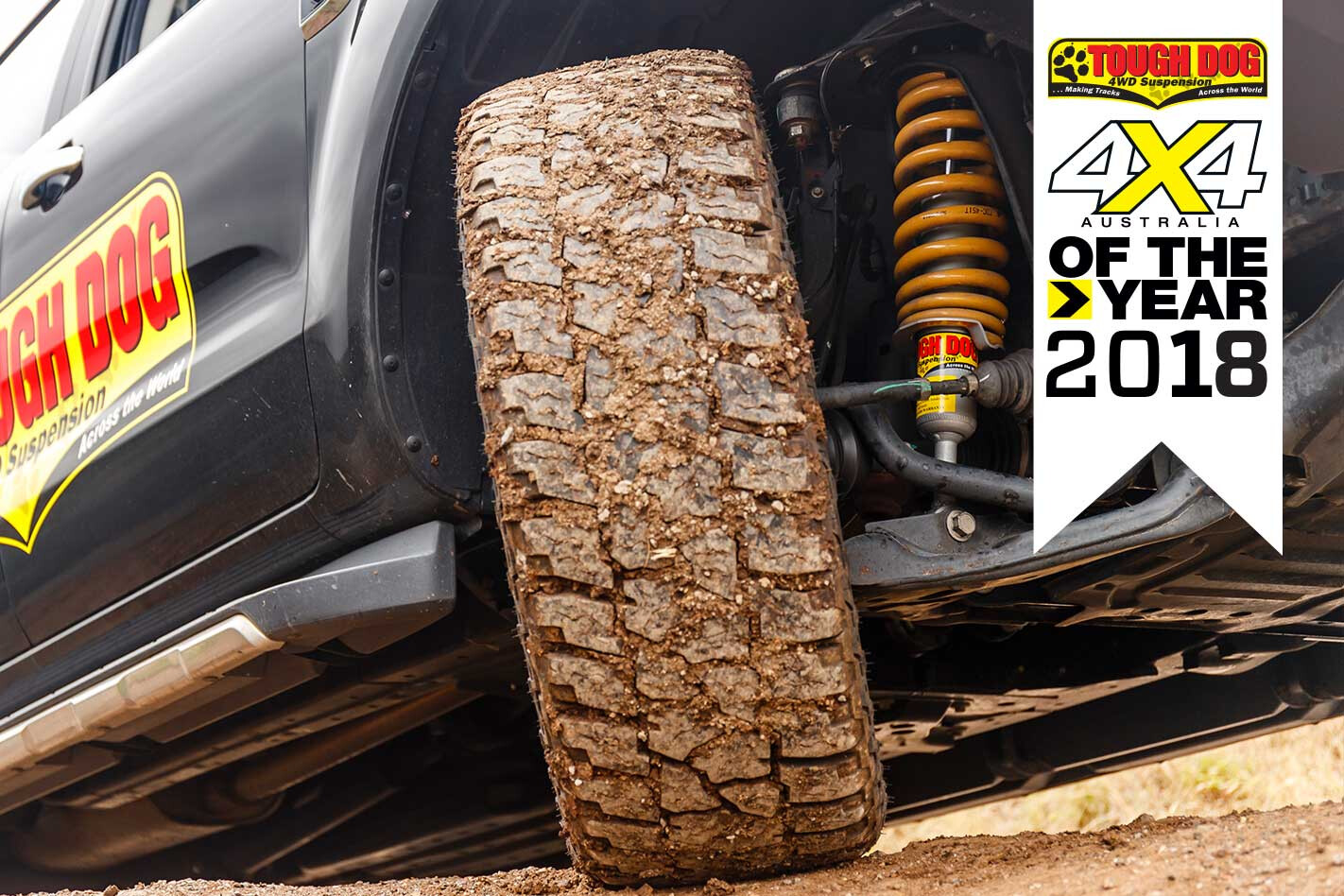 To account for the lift in ride height, the Ford Ranger also has a centre bearing kit. “We’ve fitted a spacer to the centre bearing to bring the angle of the shaft back down so that it doesn’t vibrate,” explained Simon, adding that as soon as a Ranger has been lifted by an inch or more there will be significant driveline vibration unless it’s equipped with a centre bearing kit.

THE CHOICE IS YOURS 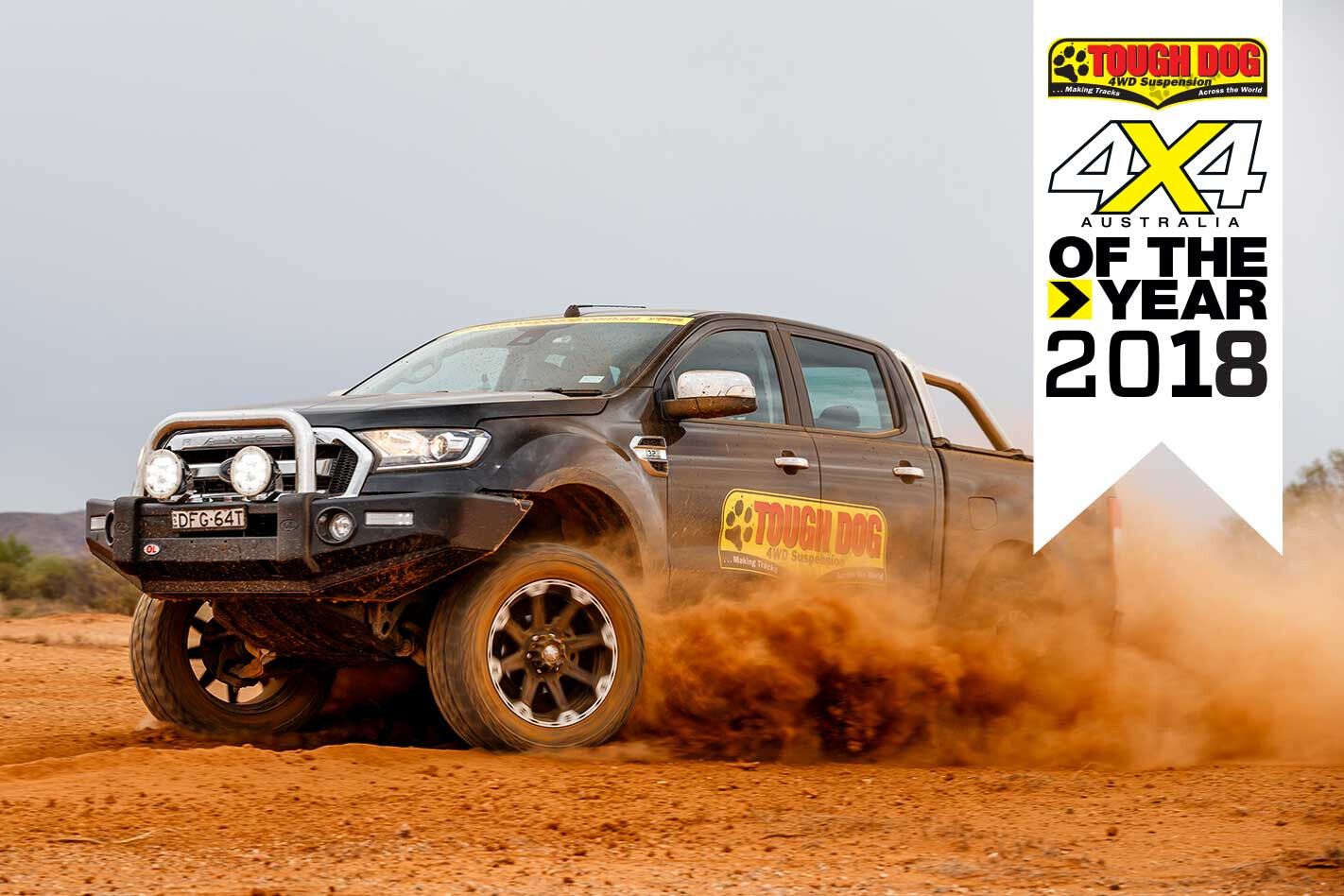 No matter what you use your Ford Ranger for (or any vehicle for that matter), and what load you carry in it, Tough Dog will have a tailored suspension system to suit your needs.

The Tough Dog website has a suspension configurator where you simply select your vehicle make and model, choose from the listed load options and select the most suitable suspension kit. The website also includes complete pricing details and you can order your suspension kit online and have it delivered directly to your nearest Tough Dog dealer.