Tough Dog brought its new Hilux along to the party to show how much of an improvement you can expect with a quality aftermarket suspension kit.

This presented the 4X4OTY testing team with the unique opportunity to drive the standard Toyota Hilux back-to-back with Tough Dog’s example, in some of the most demanding terrain in the country, both at Melbourne 4x4 Training and Proving Ground and in the spectacular Victorian High Country. 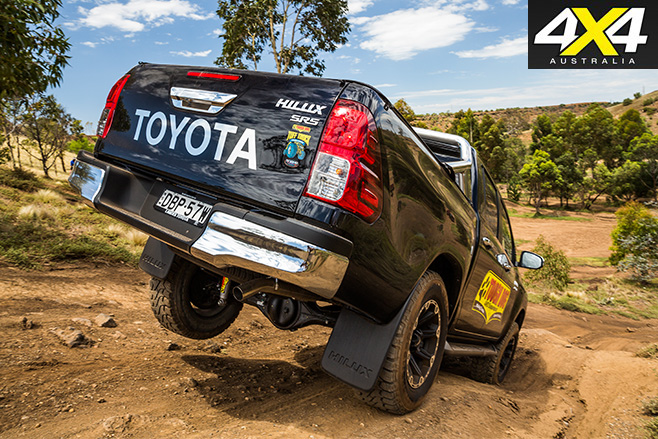 Simon reckons the new Hilux is one of the best of the new breed of 4x4 utes when it comes to carrying a heavy load, but he agrees with the rest of the 4X4OTY testing team that unladen ride quality leaves a lot to be desired. And after a week of back-to-back driving, we all agreed that Tough Dog has made significant improvements to both the Hilux’s ride and handling and, as a result, vehicle stability both on and off the road.

In addition, the Tough Dog kit gives the new Hilux a ground clearance gain of 40mm, front and rear, which proved very beneficial over rocky and undulating terrain. 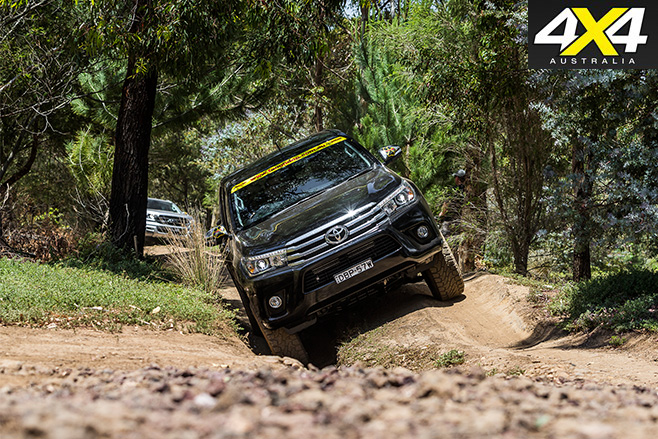 The Tough Dog team started developing the suspension kit for the Hilux well before the vehicle landed in Australia, travelling to Thailand to source a strut/coil combo that could be brought back to Sydney for closer examination. What they found was that the strut is very similar to that used in the previous-model Hilux.

“The spring seat is the same as the previous model, the length of the strut is the same, the helix of the coil is the same,” Simon explains. “So development of the new front-end for Hilux was just a matter of graphing the shock absorber on the dyno … but not taking it for granted, because sometimes when the Aussie model comes here the valving in the shock is different.” 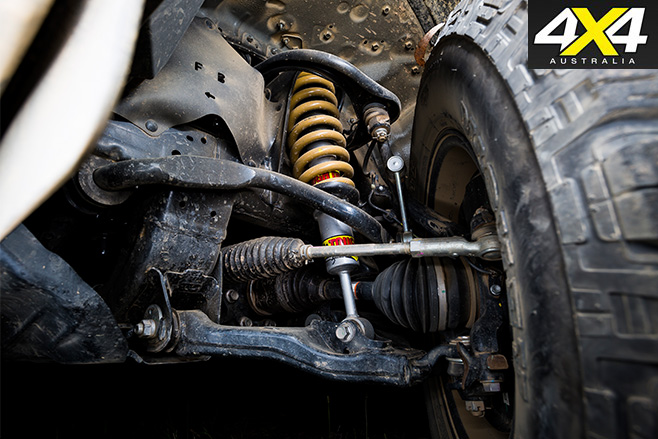 As soon Tough Dog could get their hands on an Aussie-spec Hilux (the vehicle you see here), they re-examined the front-end and started work on the rear

“We rated the leaf spring to see how much rate it generates, we graphed the shock absorber right through its entire cycle, then we then put a load in the back to see how far it compressed,” Simon says. “We then simulated that spring on a machine so that we could accurately measure the rate that it generates at ride height. 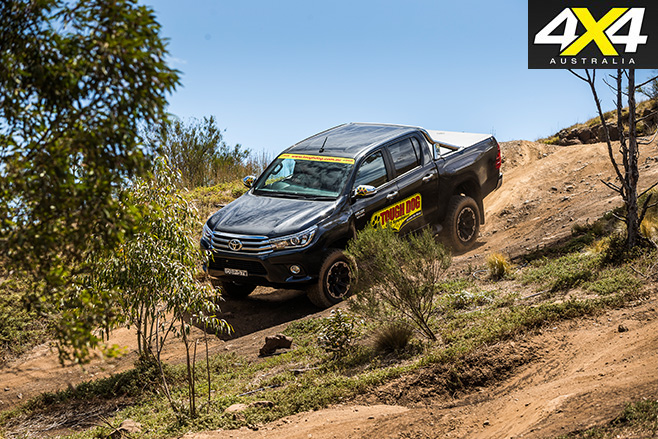 “Then we went back and took our three different assortments of loads – being 300kg, 500kg, and up to the GVM of the vehicle – and we put that on the standard spring to see how it coped. We also rated the vehicle for comfort and vibrations, and that’s done through seat-of-the-pants testing; it’s all well and good to get a graph of the shock absorber and get a spring rate, but what does that actually mean in the vehicle when you’re driving it?” 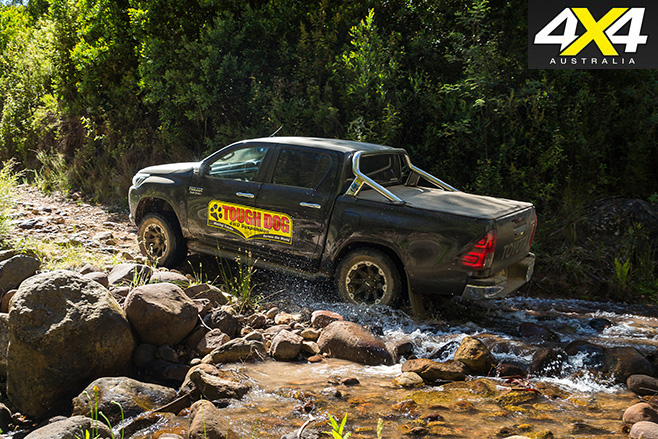 Armed with the spring rate information, the shock dyno graphs, and the seat-of-the-pants testing feedback, Tough Dog then makes the first set of coils and the first struts. It then also makes up the first leaf springs.

“We’ll make up our comfort spring first [0-300kg, as fitted to the Tough Dog Hilux on 4X4OTY], which will generally be a composition of an 8mm main with a couple of 7mm leaves, which is typical of a dual-cab ute, and then we’ll make a shock absorber, put that in the vehicle and drive it to see how it feels, to see if the shock absorber is controlling the spring…” 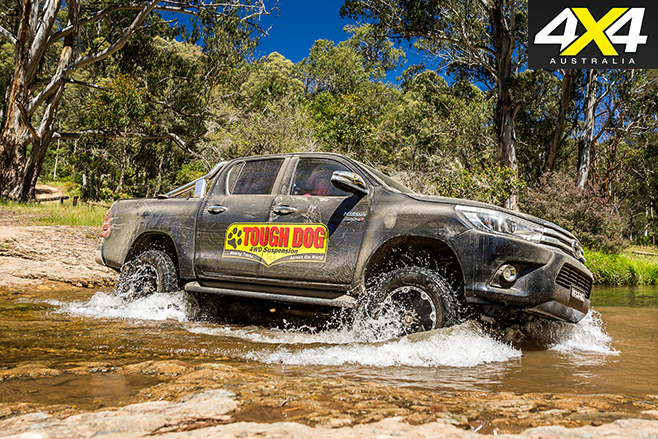 Simon points out that Tough Dog’s nine-stage externally adjustable shock absorber is a great tool in developing new shocks for new-model vehicles. “With the nine-stage adjustable shock, there is in fact 800 per cent of adjustability from setting zero to nine, so in that 800 per cent of adjustability, we would start on, say, setting two front and rear, and then we’d go for a drive,” Simon explains. “So this Hilux here has already had a set of nine-stage adjustable shocks in it; so we got the valving right where we wanted it and then we built the sealed units.”

Despite the Tough Dog Hilux suspension kit not yet being signed-off when driven on 4X4OTY, we reckon it’s just about spot on. “All of the feedback from the [4X4OTY testing team] over the last couple of days suggests that the kit feels pretty good,” Simon says. “There might be a little bit more tuning left in it, but I’m happy with the way it’s riding.” 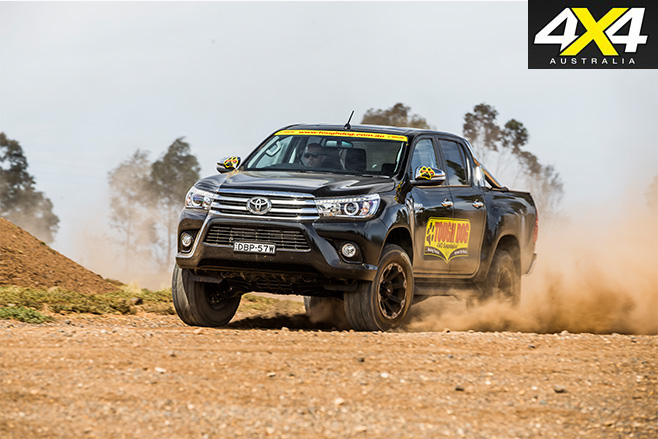 Simon advises that the Tough Dog suspension kit for the new Hilux will be on dealer shelves by the end of January.

Whether you rarely carry a load, always have something in the back, or use your Hilux to haul everything including the kitchen sink, Tough Dog will have a kit to suit. 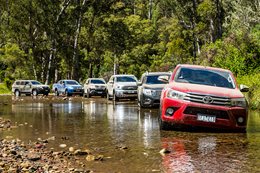 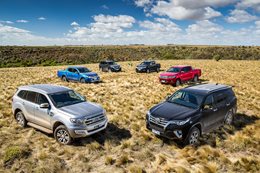 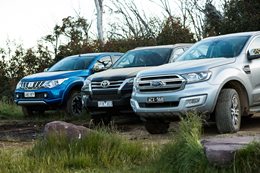