The last decade has seen the 4x4 world undergo a huge evolution.

NOT only are 4x4 wagons more popular than ever, but the dual-cab 4x4 ute has continued to evolve and is now a very serious 4x4 wagon option, especially in the last four to five years.

Still, it was the ubiquitous big wagon that continued to dominate 4x4OTY in this decade, with driving and engine technology continuing to become more complicated but resulting in further improvement to the on- and off-road experience.

This decade has also seen the two of the oldest 4x4 brands – Land Rover and Jeep – dominate the awards, with another iconic brand, Toyota, also sharing in some glory.

For buyers, there’s never been more choice when it comes to buying a 4x4 that can do double duty as the tourer and the family transporter. For judges, it is harder and harder to split the field each year, as manufacturers continue to produce incredibly capable vehicles. 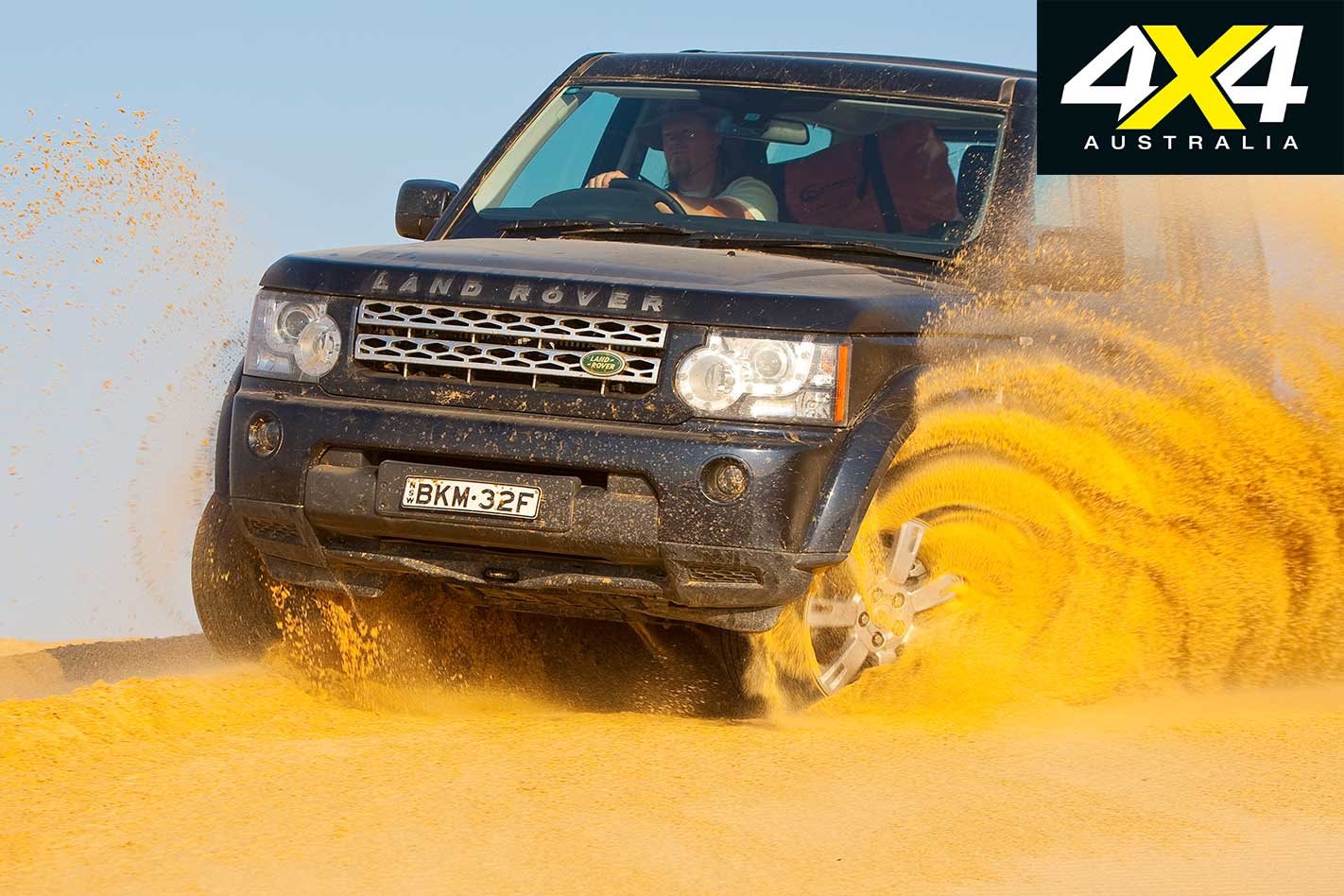 THE 4x4OTY 2010 was close, with the Disco 4 TDV6 just squeaking in ahead of the Toyota Prado GXL. The Disco’s new donk and revised Terrain Response got it through; the new 3.0-litre TDV6 featured sequential twin-turbocharging technology, the first on a 4x4 wagon at the time.

This saw the larger variable-geometry turbo pushing the engine at low rpm, but, once the engine reached 2500rpm, the smaller, fixed-geo turbo came in, shoving air into the larger turbo’s intake port to ensure a smooth ramp-up of boost before sending it to the intercooler micro-seconds later.

The performance response was seamless and contributed to the 180kW/600Nm output of the 3.0-litre oiler. On top of this ball-tearing donk, Terrain Response was further tweaked by LR, with a welcome addition being the sand launch function that more effectively controlled wheelspin when moving the beefy Brit in soft sand. 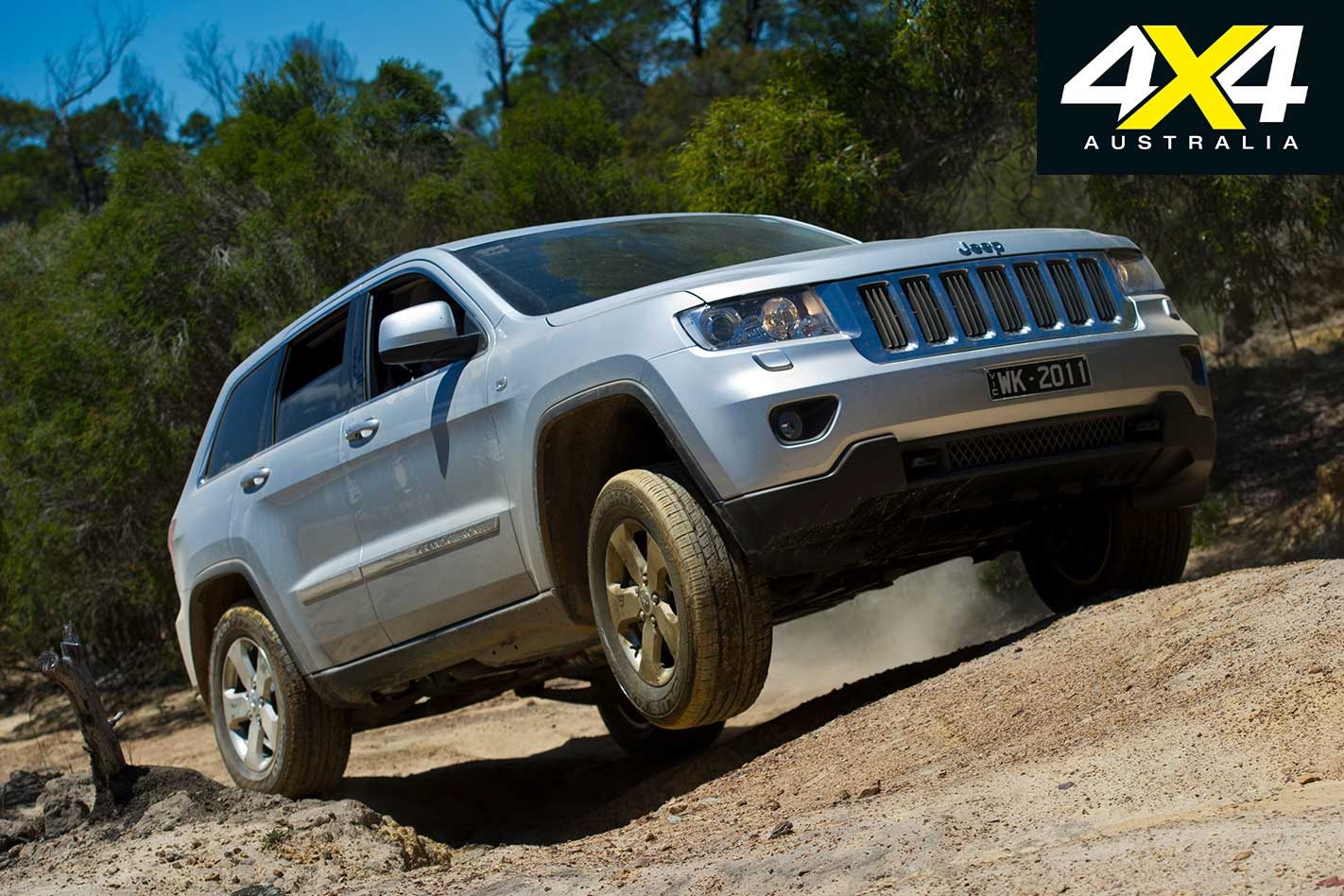 JEEP showed its all-new WK model Grand Cherokee at the Sydney Motor Show in November of 2010, with the all-new 3.6-litre ‘Pentastar V6’ engine that punched out 210kW/347Nm. It was backed by a five-speed auto and Quadra-Trac II full-time 4x4 with low-range and optional Quadra-Lift adjustable air suspension.

New for Jeep was Select-Terrain, which allowed the driver to switch between five modes for various driving conditions, ala Land Rover’s Terrain Response. The modes were Sport, Snow, Sand & Mud, Rock, and Auto.

The Jeep’s monocoque chassis was far stiffer than the previous-gen GC, and NVH levels were very good as well. It had been a long time since a petrol-powered engine had scored the 4x4OTY win, but the Pentastar was relatively frugal and the Grand Cherokee came with a very sensible 93-litre fuel tank. 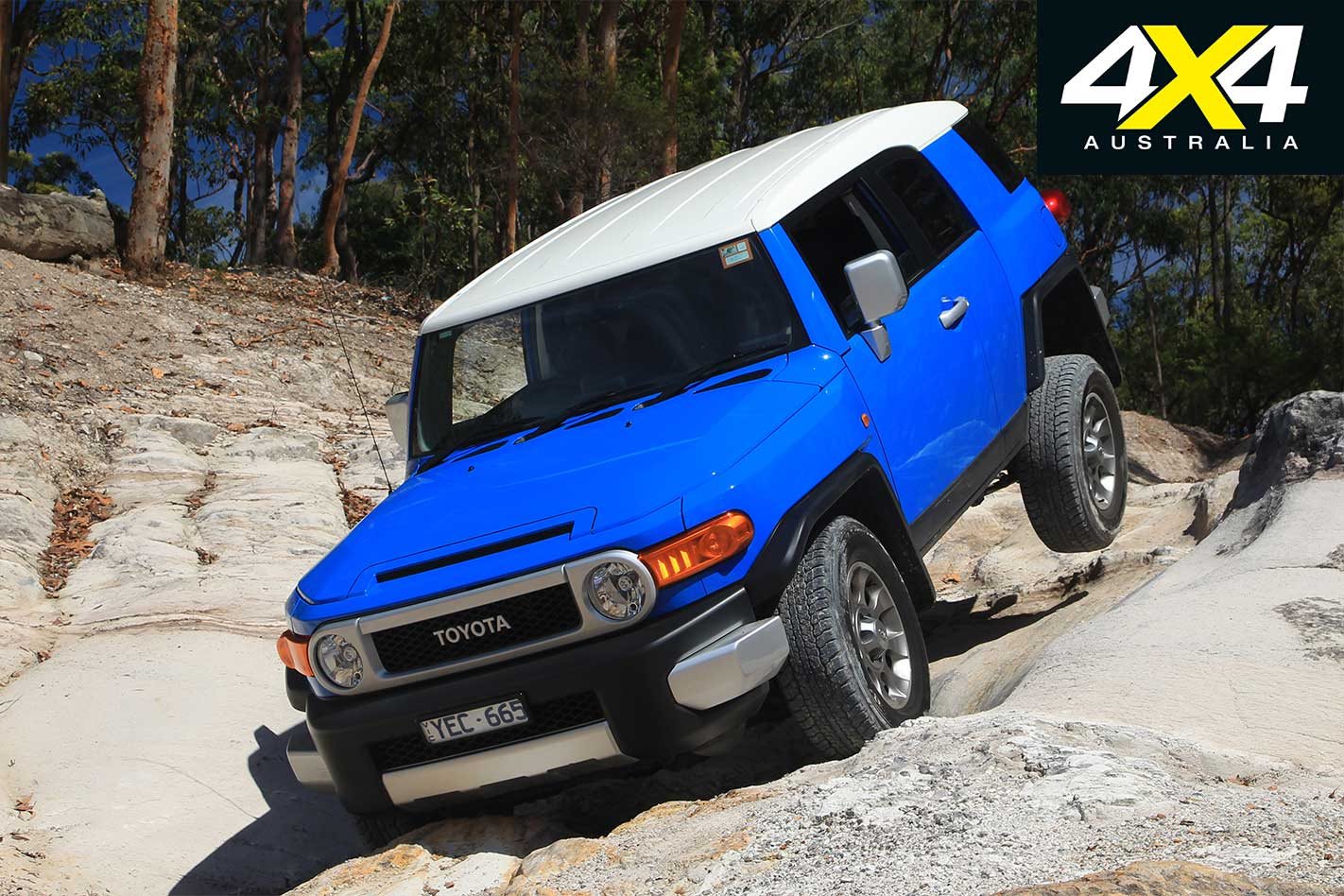 ANOTHER petrol-powered winner lobbed in 2012, with Toyota’s retro-styled FJ Cruiser being powered by a 200kW 4.0-litre petrol (with five-speed auto) pulled out of its stablemate Prado (on which the FJ was based).

The FJ possessed good ground clearance, short overhangs, a relatively short wheelbase, plenty of rear axle articulation and a standard rear diff-lock, making short work of any off-road challenges. The FJ made do with part-time 4WD but included a raft of safety tech (traction and stability control, ABS) that kept it tracking on wet, slippery bitumen.

This first incarnation had a small 72-litre fuel tank (this was upgraded in later years), but the V6 was still relatively frugal thanks to the FJ’s moderate weight (2000kg), matching some of the bigger diesel-powered wagons on test for fuel consumption. 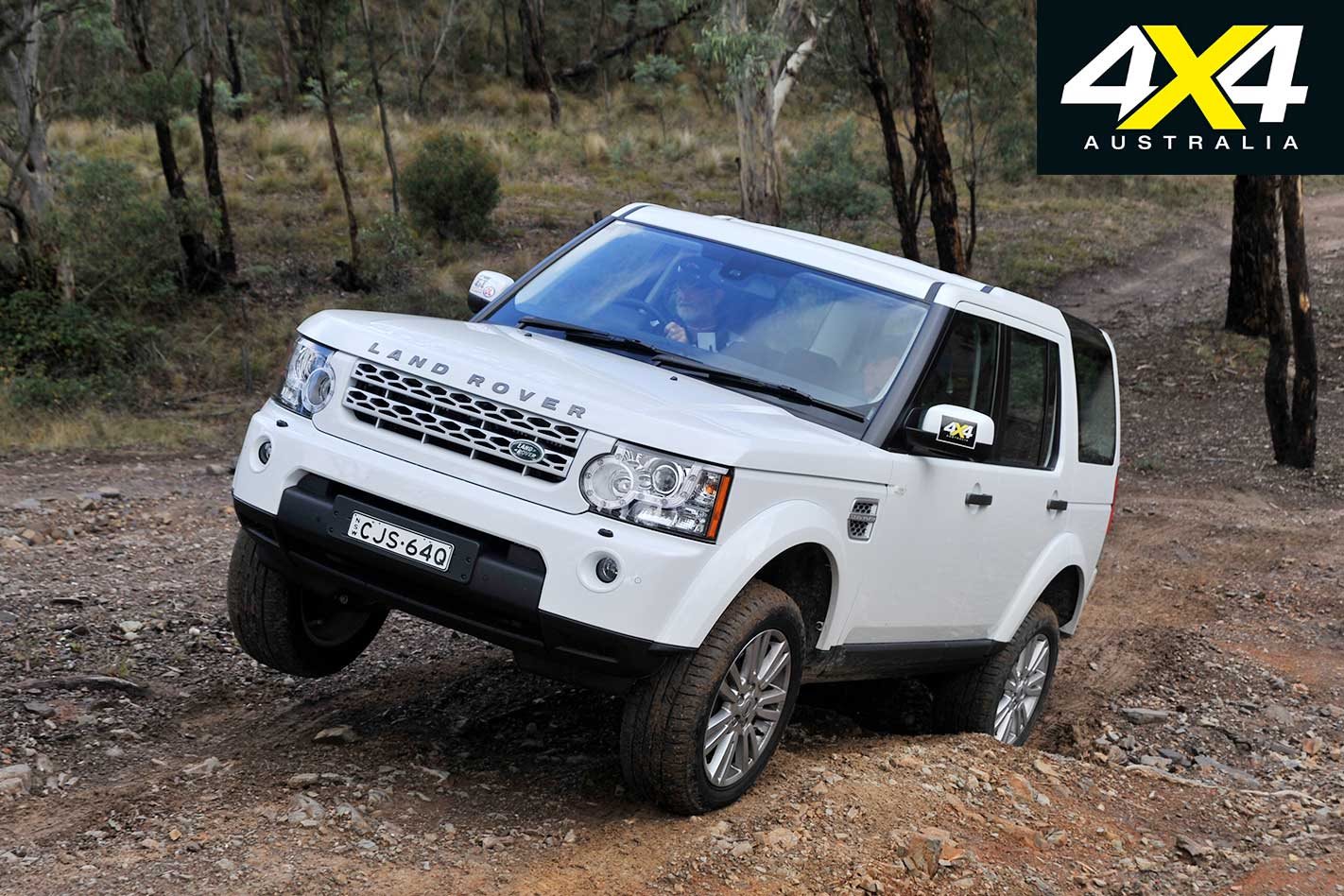 LAND Rover’s Discovery 4 TDV6 for 2013 was the brand’s ‘budget’ model, asking buyers to stump up around $69K for what was an incredibly capable all-rounder. The D4 TDV6 used a new ‘low-power’ bi-turbo 3.0-litre V6 diesel in this model, backed by a smooth eight-speed ZF auto gearbox. When we say ‘low-power’ the engine still produced 155kW and 520Nm.

Besides the new engine/gearbox combo, this latest D4 carried over all the previous award-winning traits of incredible out-of-the-box off-road capability, thanks to its Terrain Response system, with smart buyers adding in the excellent-value ($1060) rear locker for even better off-road performance.

Add in the usual immense cargo space and excellent around-town manners and it was yet another win for the big Brit. 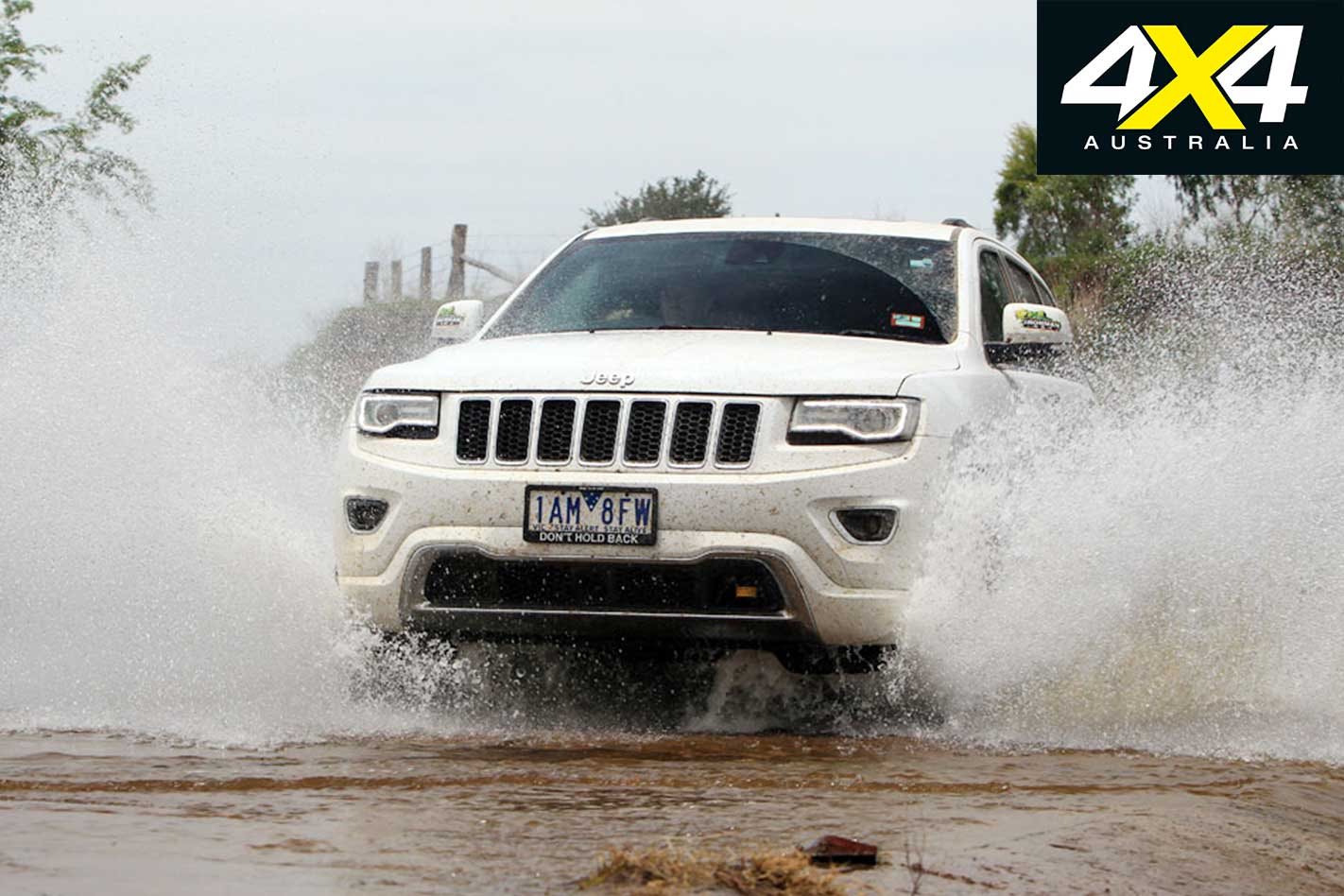 The WK Jeep Grand Cherokee had, in Pentastar V6 petrol form, won 4x4OTY in 2011. It was a few years in-between the spoils, then, before the US icon’s large wagon nabbed top honours again.

It was hard to argue with the unanimous judges’ decision though; the top-spec Overland, as tested, cost $71,869 but was absolutely chockers with kit that you’d expect to pay north of $100K for in this market.

For the money you got a high-tech European 3.0-litre V6 diesel, punching out 184kW and 570Nm and put to the ground via a sweet eight-speed gearbox. The donk is frugal and the auto works perfectly with it. Add in Quadra-Lift air suspension and Jeep’s Select-Terrain and it was a fun vehicle off-road that was also very easy to live with in town. 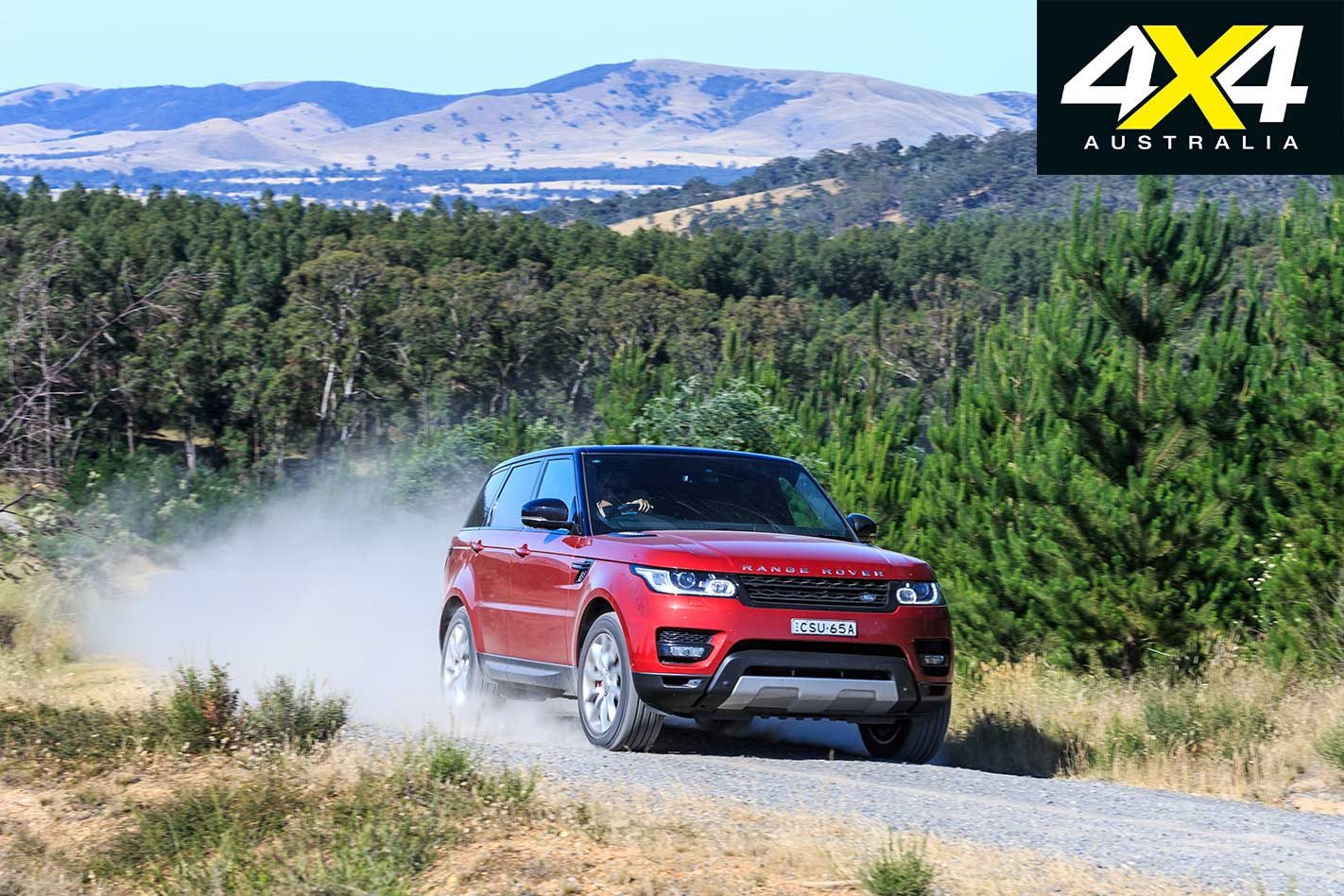 The new monocoque chassis is shared with the big-brother Range Rover and offered a significant weight loss for the Sport – up to 400kg – which saw the vehicle offer startling performance and amazing fuel economy.

Add in the fact it was equally adept at tackling winding, fast bitumen roads as it was scrambling up the gnarliest climb (even with 20-inch road-oriented rubber) and this latest Sport finally fulfilled that ultimate all-rounder dream. 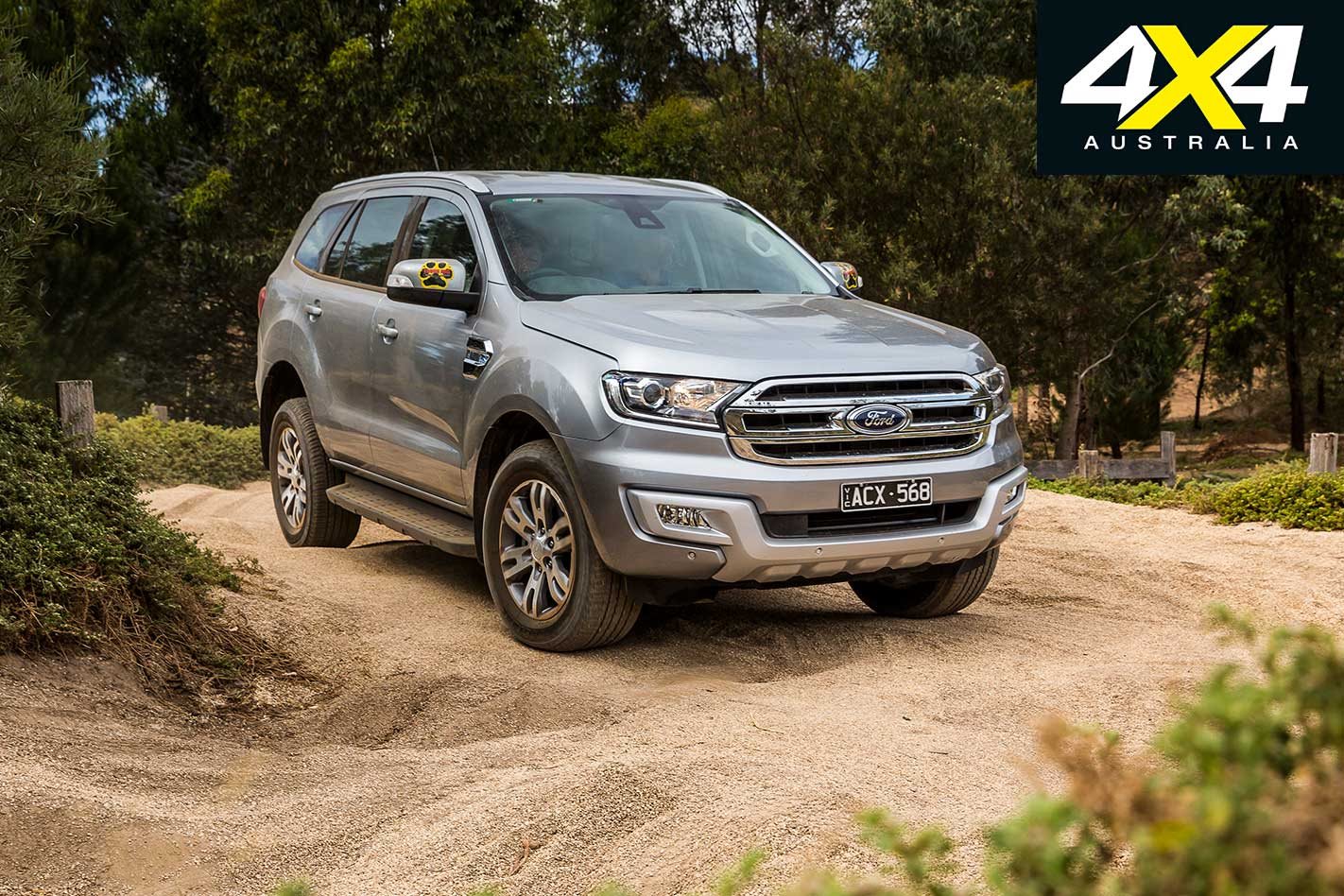 BUILT on a shortened version of Ford’s T6 platform, the Ford Ranger-based Everest was aimed at the burgeoning family four-wheel drive wagon market and it met that target perfectly.

Powered by the Ranger’s sturdy 147kW/470Nm 3.2-litre five-cylinder turbo-diesel and backed by a six-speed auto, the Everest offered constant 4WD on sealed surfaces, five-star ANCAP rating, and a full bag of off-road tech tricks starting with Ford’s Terrain Management System (TMS). This dial-based setup tweaks the Everest’s throttle, gear changes and traction control depending on the setting it is in (Normal, Snow/Gravel/Grass, Sand or Rock). If it sounds familiar, it should; Ford owned Land Rover during the development of LR’s Terrain Response system.

This aside, the set-up worked brilliantly and, in conjunction with the standard-fit rear diff-lock, meant the beefy Ford offered excellent off-road capability without sacrificing what was top-of-class on-road handling, thanks to its IFS front/live-axle rear set-up. 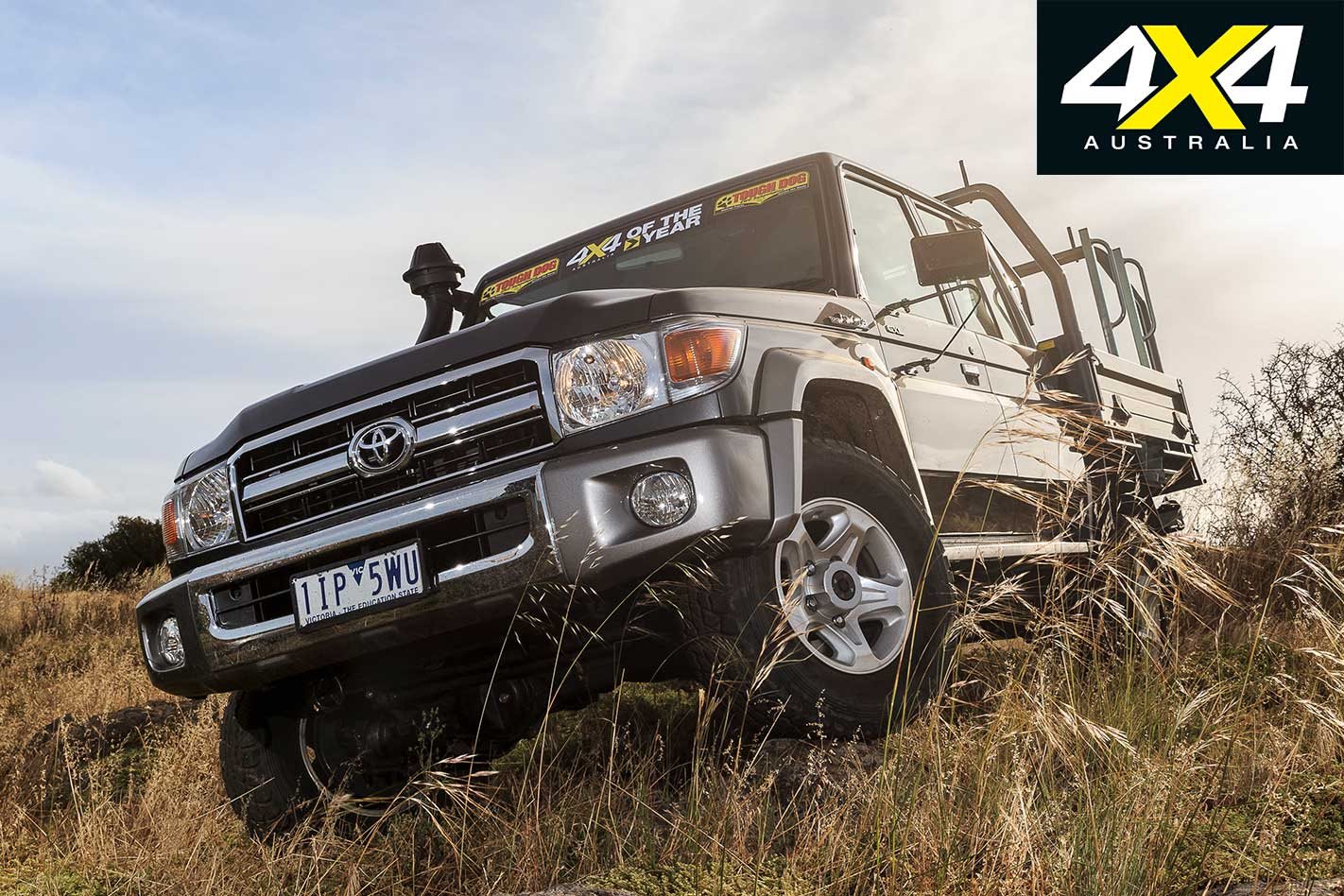 IT WAS a case of back to the future for 4x4OTY 2017, with one of the oldest continuously sold vehicle line-ups – Toyota’s 70 Series, clocking more than three decades – being updated with safety tech, tighter emission controls, a more modern interior and (at last) a dual-cab.

The trusty 151kW/430Nm 4.5-litre V8 diesel also received updates in the form of a DPF and piezo injectors, with Toyota claiming better fuel consumption as a result. Brilliant off-road, the LC79 also became slightly more civilised on it after these changes, with the dual-cab incarnation answering the prayers of hardcore off-road tourers Australia-wide.

4x4 of the Year: What the judges thought of the LC79 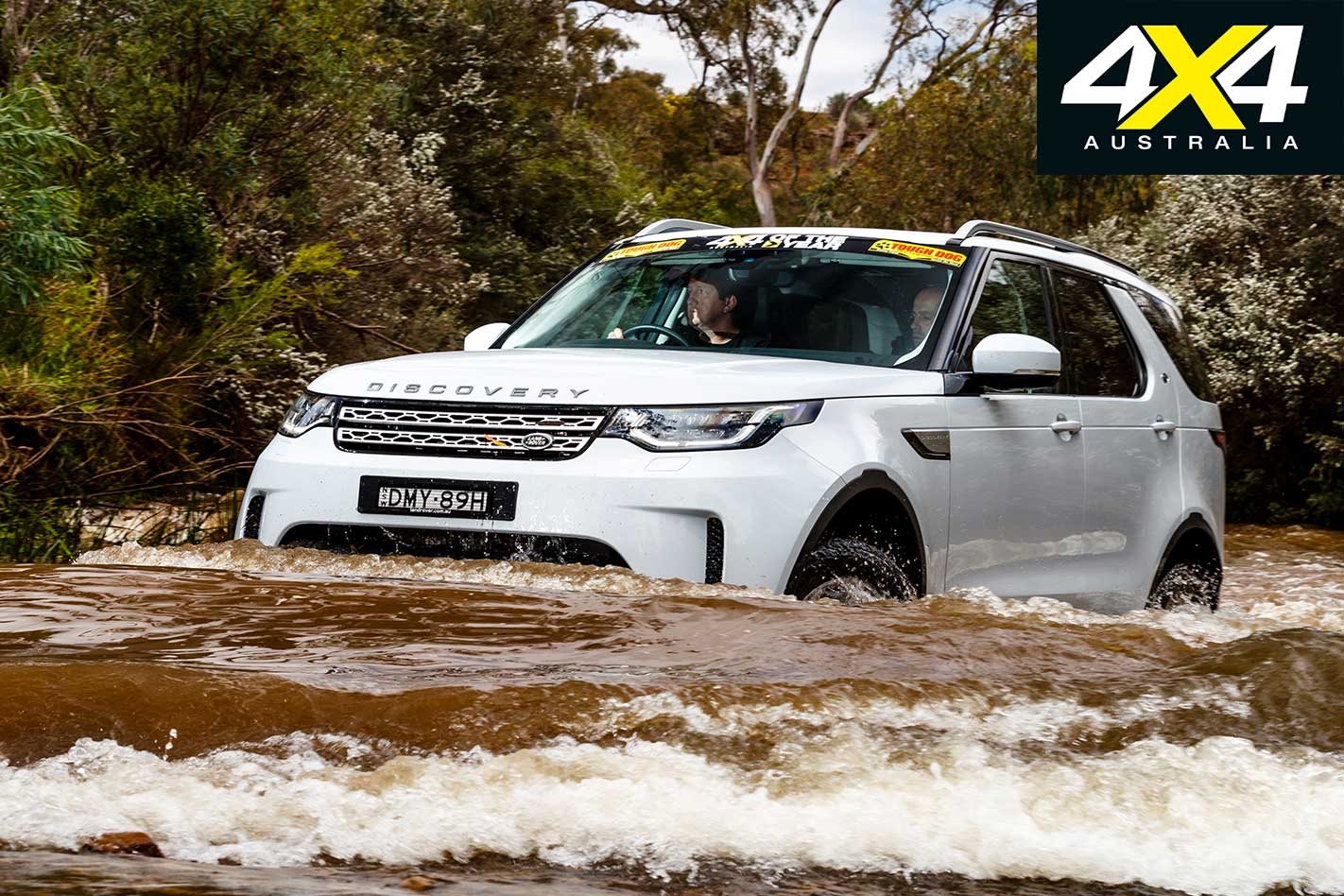 WHEN it was first revealed the new (third-gen) Discovery was met with plenty of raised eyebrows due to its styling, the engine options (two ‘small’ four-cylinder oilers and a V6, with no petrol option) and its monocoque chassis.

The SD4 is a 2.0-litre four-cylinder Ingenium engine that uses two different-sized sequentially arranged turbos to produce 177kW and 500Nm. Thanks to the vehicle’s lighter weight (up to 480kg lighter, depending on model) the performance from this ‘tiny’ engine was amazing.

Off-road, the Disco was as formidable as ever, relying on Terrain Response II, fully independent air suspension that offered plenty of wheel travel, a ride-height up to 283mm, and class-leading 900mm wading depth. Add in taller-profile tyres than the D4 (allowing for more bush-ready tyre replacement options) and a raft of safety features, and it was a clear winner.

By not trying to be all things to all men, as all other dual-cabs try to be, the Raptor has come up with a winning formula based on a supple, well-controlled and sophisticated suspension.

On any back road – the rougher the better – or any 4x4 track it works brilliantly and helps to make the Raptor an enormously fun-to-drive, competent and capable recreational 4x4 dual-cab. -Fraser Stronach 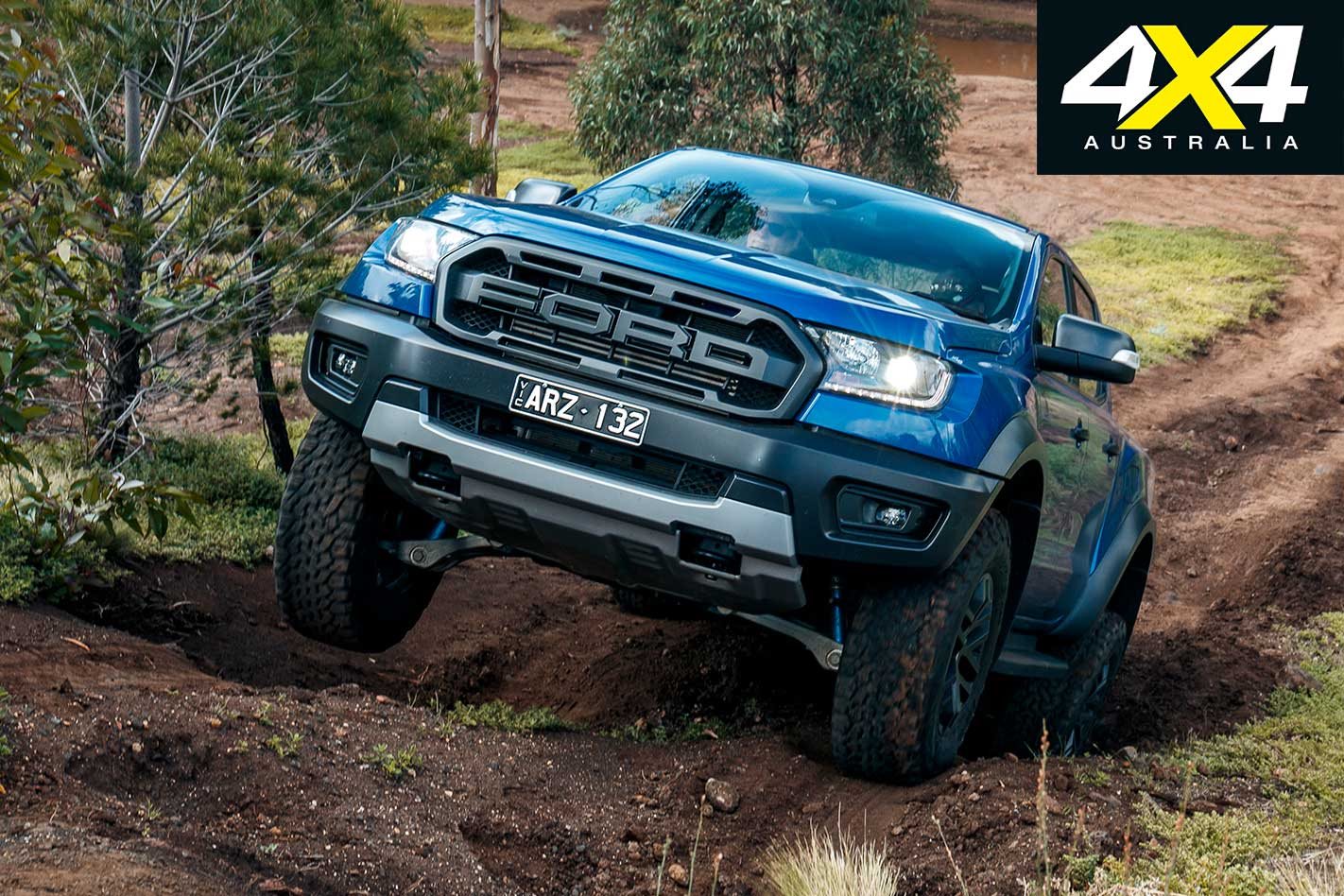