Reaching the Australian continent’s northernmost point in a 4WD has become the stuff of off-road legend, whispered about over campfires and laughed about over painful-to-watch ‘Fail’ videos on YouTube.

Smashed, drowned and ruined vehicles litter the annals of Cape history, to say nothing of the countless bruised egos and emptied wallets. Words such as ‘Gunshot’ and ‘Nolan’s’ are thrown around in bush banter as badges of honour for those who have faced such challenges. Few drive away from them unscathed.

The notion of a trip to The Tip became even more intimidating when VW invited journalists to drive the torturous route in Amaroks. Standard Amaroks. (Well, mostly. Our six-strong convoy was fitted with aftermarket snorkels from German aftermarket supplier Seikel.) 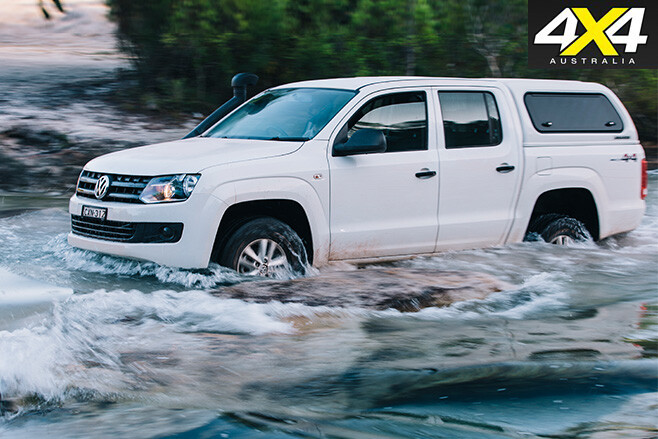 The aim of the drive was to throw Amarok’s Core Edition models, the company’s tilt at entry-level ute supremacy, at some of the toughest terrain Australia has to offer to see how the vehicles fared.

Three days, 13 blokes, six Amaroks and more than 400km of corrugations, 4WD-swallowing ruts and windscreen-deep water crossings. Was this fast blast to The Tip destined to be a disaster or delight?

It was mid-August, the Dry in this part of Australia; that’s winter for the rest of us. The Dry, between June and October, is the best time to visit Cape York Peninsula, according to Queensland’s Department of National Parks, Sport and Racing. The Wet (November to April) is too wet and many tracks become impassable, or, at the very least, troublesome.

And there are Wet Season closures from December to June, July or August “depending on weather and road conditions”.

Our convoy – with VW staffers in the first and last vehicles – swept out of Weipa, as slick as a Route Irish military convoy in war-time Iraq. We were heading east for our day’s-end destination of Moreton Telegraph Station, about 133km away. 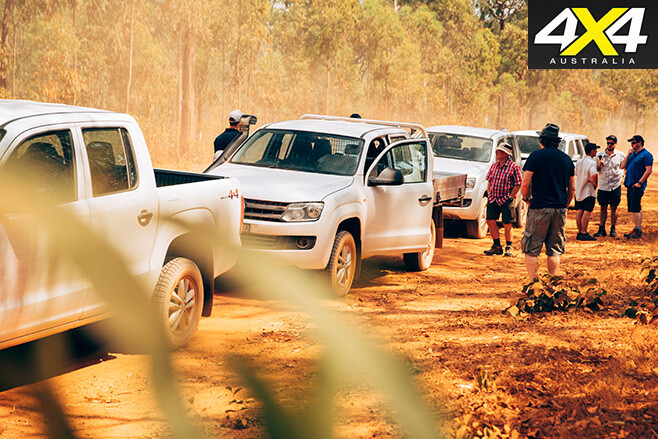 We powered along over smooth dirt roads and stretches of bitumen at a fair clip when, seemingly only minutes later, our trip was over before it had really begun. The convoy was stopping, coming to an abrupt halt at the side of the track that stretched away into the distance. There was what looked like a controlled burn just outside of Weipa, so we all got out of our vehicles to watch expert snapper Chris Benny as he busied himself capturing the spectacle.

Acrid smoke tickled our nostrils. The heat from the flames was intense. Hundreds of lizards and countless other wildlife species fled from the bushland on one side of the road, which was alight, to the relative safety of the other side, which wasn’t. Mindful of the threat of snakes, we stutter-stepped around scattering wildlife. Birds were busy dive-bombing the scurrying creatures below, gorging themselves on the spoils of this mass exodus. It was a wild sight; indicative of what was to come in this largely untamed wilderness.

With shots in the bag, and no bites from the freaked-out fauna, we drove off, turned left onto the legendary Old Telegraph Track (OTT) on our way to Moreton Telegraph Station. Driving the OTT gave us ample time to check out our eight-speed auto Amarok Core on the go.

The Amarok has been around since 2011 and it’s won 4X4 Australia’s Ute Of The Year award two years in a row. It has attracted its fair share of fans among 4WD journos and four-wheel drivers. 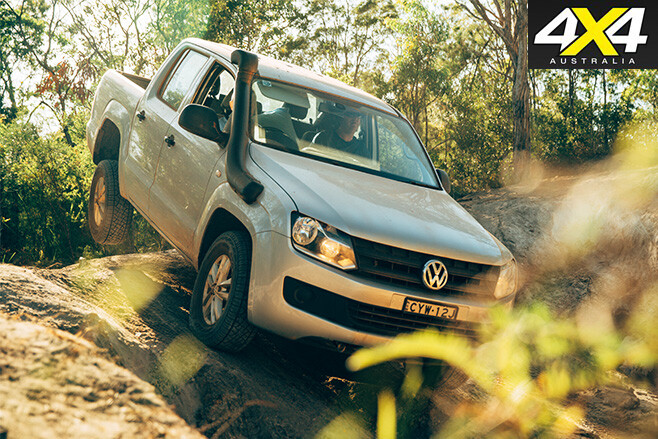 For the MY16 line-up (on sale from October), the range is the entry-level Core Edition, Highline and Ultimate. The Trendline will be discontinued from October. The company’s rationalisation of the Amarok range will chop 26 variants down to 18.

The Core Edition, since being made available earlier this year, had become “very competitive at entry-level point”, VW Commercial Vehicles product marketing manager Nick Reid told us at that morning’s briefing. He reckoned the Core had started “to really hit a sweet spot” in the market and, with the model, VW aimed to grow its “penetration at that entry-level of the market”. 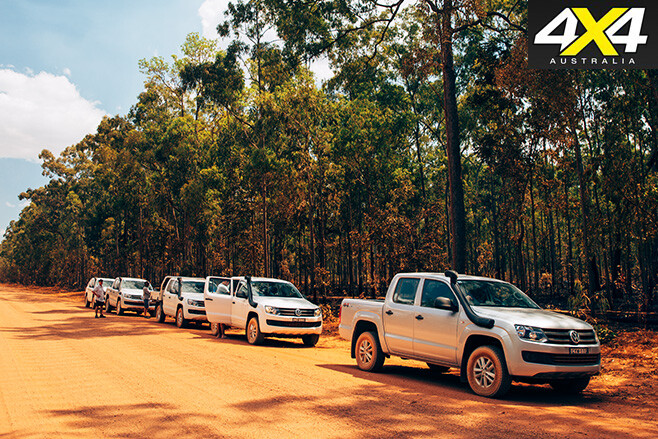 Safety gear includes front, side and side-curtain airbags, anti-skid brakes with brake assist, and stability and traction control. There are no parking sensors or reversing camera.

Inside, the Core is ready for play all the way: it has room aplenty, comfortable cloth seats and rubber matting on the floor.

This Amarok coped well with slip-and-slide dirt and sand tracks, and admirably soaked up corrugations. Like any ute, it rides better with a load in the back, but the Amarok’s leaf-sprung live rear axle is not a deal-breaker when it comes to ride comfort. 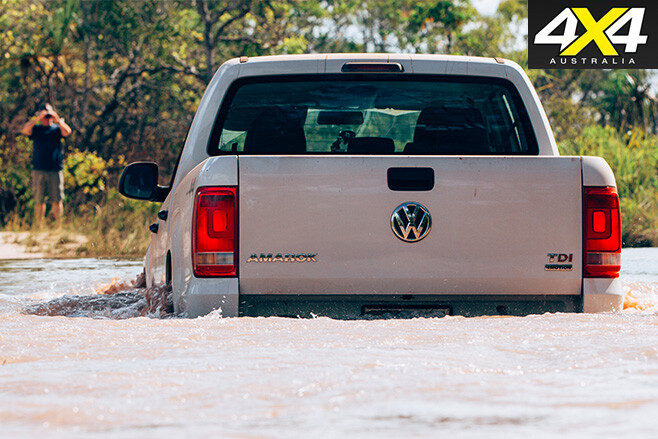 The Amarok has a fight on its hands – especially in a market crowded with new utes, not the least of which are new versions of the Ranger, Triton, Navara and Hilux.

As we neared Moreton Telegraph Station, bathed in late-afternoon sunlight, we saw the first of many “Beware! Achtung! Crocodiles!” signs in this part of the country. It was a not-so-gentle reminder that in Cape York, this last frontier of real adventure, man is not necessarily top of the food chain. I kept this in mind.

Up with the sun the next day, our Core convoy was scheduled to drive 129km from Moreton Telegraph Station via Bramwell Junction to Eliot/Twin Falls.

At Bramwell Junction Roadhouse, our group was met with derision by a few of our fellow Tipsters. One lady was so besotted with her own joke that she repeated it along the entire convoy, from our tail-end Charlie all the way to the lead vehicle, cackling as she went.

“Anoraks,” she chortled. “The Anoraks are here.”

“The Tip,” I replied, knowing she was setting me up for a knock-out joke.

“Well, you got this far, at least!” she screeched and off she trotted to her Land Cruiser or something else similarly hard-core suited and booted.

With her taunts ringing in our ears, we continued on the OTT.

Termite mounds, some two-metres tall, had stood guard on either side of the track for much of the way. The air was dry and dusty and warm, but not uncomfortably so. That didn’t matter, though, because we were about to get our feet wet. The first few creek crossings were easy enough and made for handy lead-ups to what was to come. Smooth progress was simple once the rear diff was locked and off-road mode was selected. The rest was up to the driver, who needed to wisely pick a way down the approach, maintain steady momentum through the water, and then up and out the other side. Easy. No need to gun your way through; just steadily throttle and the Amarok’s more than capable tech will back you up.

These VW’s have a 500mm wading depth and we were deeper than that pretty much from the start, so it was a good thing we had the snorkels.

Nick Reid, at the previous day’s briefing, had said that the Amarok Core was “better experienced than explained” – and we were definitely about to experience it. The next creek crossing, a seriously tight, twisty switchback affair caught out a few drivers; scraped front bumpers and banged-up trays were the result, but that was about it.
The auto’s low-low first gear, in lieu of a low-range gear, and the Amarok’s unflinching hill descent control – it holds your desired speed downhill – proved an unbeatable off-road combination on the tougher sections of this track. The standard rear diff-lock and front-wheel traction control helped get the Amaroks over most obstacles, including the very steep and greasy muddy uphills we often faced.

After working our way through numerous creek crossings, we suddenly faced the Big Daddy of all 4WD challenges: Gunshot Creek. There are, in fact, numerous ways through Gunshot, most of them near-vertical extreme, but we found our planned route and one of the support Amaroks gave it a good crack. It didn’t work out as planned, so we back-tracked more than 20km onto the bypass road and continued on. Later, at our Eliot Falls campsite, we jumped off towering rock faces, and ducked and dived under the cool water of the waterfalls there.

The final day was a 167km run from our camp to The Tip.

We whizzed through several creek crossings, with ominous-sounding names, such as Mistake and Cannibal, scattered along the 40km route to the Jardine River. We were excited at the prospect of taking on Nolan’s Brook, the last great challenge of this trip, so those other smaller crossings barely registered as we punched our way through them.

Nolan’s Brook is right up there with Gunshot as a 4WD-killing, hope-dashing, pride-smashing off-road obstacle; many have tried, a lot have failed. As we pulled into the area around Nolan’s, one bloke there advised us that he’d heard that sending three vehicles – and only three – at a time was the way to go, otherwise the creek’s base would be so churned up, it would be almost impossible to get across.

There were more than two ways across but, it turned out, we needn’t have worried.

Having picked a careful line, we eased into the water gently, took a sharp right turn to avoid a deep hole or two, and kept a steady pace across the creek. That was the way to go, and only a couple of us had to be snatched out.

We watched as a three-vehicle convoy trailing behind us, carefully scoped out the crossing, decided on a plan, drove it and moved on.

Having conquered Nolan’s, we had lunch on its banks, savouring the peace and quiet and throwing around congratulatory back-slaps. 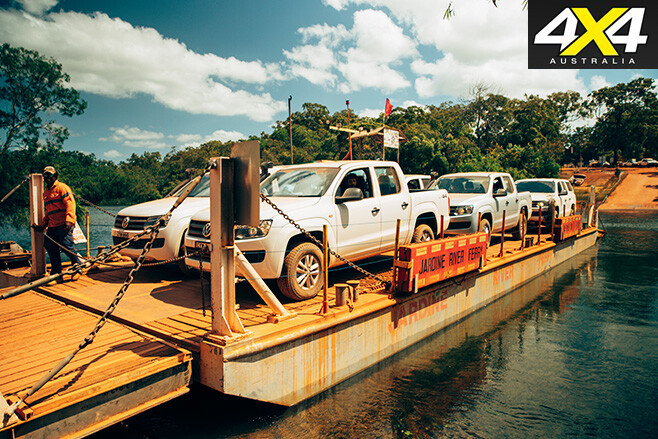 From there, it was a solid thrash over corrugations, with our utes settling better on the rough stuff than you’d ever expect of an unladen ute, to the Jardine River ferry.

North of the Jardine River, we raced over well-maintained dirt roads at a healthy clip to Bamaga, parked as near to the northern edge of Australia as legally possible and then took a short walk across a rocky point to The Tip for the obligatory series of photos. 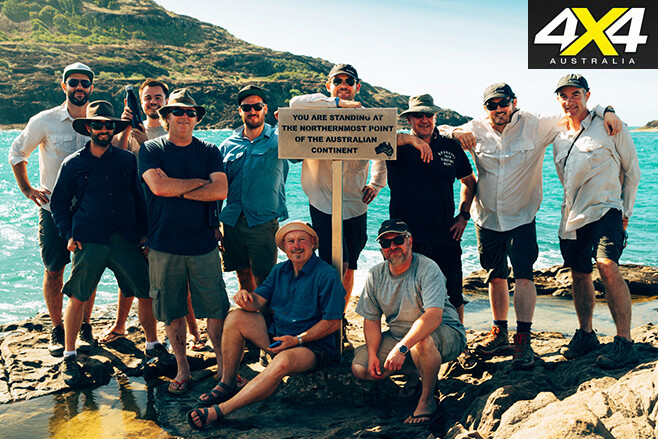 That night at Punsand Bay’s Corrugation Bar, smiles were wide, beer was cold and tall tales were told. We all agreed that The Tip was tops.