In the past few years, the Iveco Daily 4x4 has caused a stir for being an almost perfect outback travelling vehicle.

It is big but not too big, has a powerful intercooled turbo-diesel engine, a manual gearbox, not one but two low-range ratios, can be fitted with 37-inch rubber as standard, has huge towing and carrying capacities, can be down-rated to drive on a standard drivers licence and comes with offerings of single and double cabs that drive more like cars than trucks.

Enter Expedition Vehicles Australia (EVA), a Queensland-based mob that has devoted its expertise in kitting out remote area vehicles on the Daily. 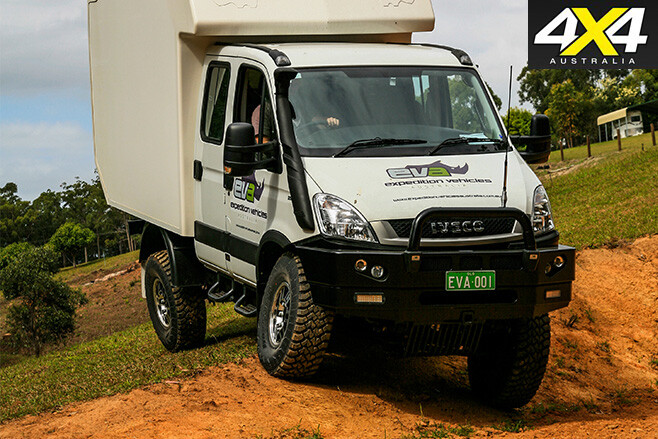 Hands-on owner Justin Beall reckons that although there are other vehicles out there that can do part of the job, the Iveco Daily nails its category of vehicle, offering superior comfort and unrivalled off-road ability without needing aftermarket accessories; as if OE front and rear lockers, parabolic leaf springs, ultra-low range gearing and huge rubber need adding to!

While Justin has not spent an age in this section of the 4x4 industry, he is a step ahead because of his industrial chemistry background, ability to use CAD, solid works and finite element analysis skills to design and test his manufacturing even before it leaves the shed. Added to that, Justin has built Trophy Trucks for desert racing and competed in the odd Outback Challenge and nav-runs.

ADR-approved rims can mount 37x12.5R17 rubber, opening up the possibilities for where   the EVA can go.

Specifically for the Iveco Daily 4x4, he has developed both steel and aluminium 17x9-inch rims, which have been approved for use in Australia.These rims are a replacement for the original, narrower steel rims and can legally mount a range of 37x12.5R17 tyres to offer exceptional on- and offroad handling.

Not one for keeping things stock, regardless of how good they are to start with, Justin fits King Shocks to his EVAs, while retaining the ultra-flexible parabolic leaf springs.

His knowledge of all things plastic – he was an industrial chemist, remember – has allowed him to design and manufacture a 200-litre capacity water tank that can be slung underneath, via his own lasercut fitting brackets.

200 litres of water ticks all the boxes for remote travel.

His 158-litre fuel tank adds to the standard 90-litre job, while alloy bullbars, winches, custom tow bars with optional Air Safe units fitted, air adjustable seat modifications, solar panel arrays, headlight upgrades and even custom-made access handles for those that need help climbing up into the cab can all be supplied at EVA.

Surprisingly, given all the other standard off-road oriented inclusions, the Daily comes with no snorkel, but Justin is quick to bolt one of those on to be sure that clean air is delivered to the high-tech common rail intercooled turbo-diesel.

An optional snorkel can be fitted.

For something just a bit different – or extravagant, depending on how you look at it – Justin was in the process of fitting an Alison six-speed auto ‘box to an EVA Daily. While it’s his first attempt at this, there is no mucking around with the process given the brand-new ’box sitting in a crate just waiting for final bracketry to be cut.

The only downside he mentioned was that the new gearbox tips the scales at about 150kg, compared with the standard six-speed manual at 50-60kg. While that’s a huge weight increase, you can betcha bottom dollar you won’t break an Alison ’box, plus you get a smooth-shifting auto six-speeder. Justin can build pretty much whatever you want, from a custom alloy tray for work or play with associated under tray tool boxes to his own fibreglass mobile home module, complete with all the mod cons most expect while touring indefinitely.

One downside to the vehicle we plainly witnessed during our day out driving was that even though there are four seats in the rear bench of the dual cab, making it a six-seater, you really can’t expect to fit four healthy lads in comfort. While it’s easy to fit three, you have to sit where the seat belts are, so you still end a bit squashed.

There are other trucks on the market that can more easily take four in the back seat without it being so squeezy. Other than that, the Daily features plenty of in-cab storage space and sits comfortably at any legal highway speeds you choose. If you feel the hankering to drive what may well be one of Australia’s best longterm, off-road touring machines to tackle your jaunts around our great southern land, you can give Justin at Expedition Vehicles Australia a bell on 0402 337 734 or visit www.eva4x4.com.au/ for more information.

Personal Experiences
I’ve been waiting for years for the Daily to reach our shores, having had a bit of first-hand experience with them in the Dakar Rally back in 2010. While they have been available in some countries for years, it took Iveco an age to bring them to us. 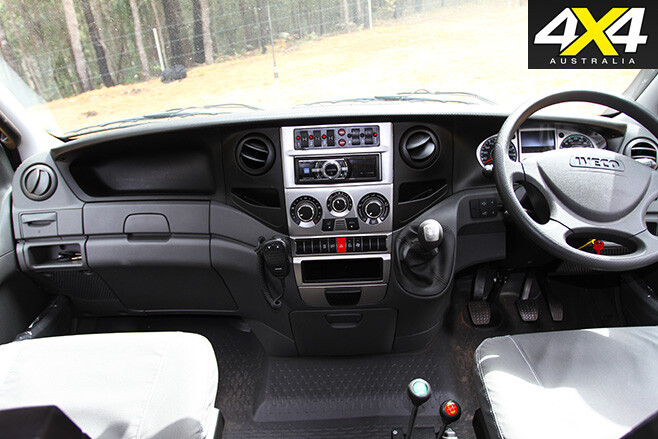 Then there’s the price; sure, it’s more than a new Cruiser, Patrol or any other serious off-roader available in Australia, but you don’t have to add much aftermarket gear to hit the tracks. So I still wanted one. The only problem I couldn’t get over was the size of the Daily.

It’s not as large as a Canter or Hino that I drive in my local Rural Fire Service and it’s not much longer, wider and higher than your average large recreational 4x4. But, having a Daily as my only vehicle would become a pain in the rear for the 95 per cent of time spent off the tracks.

Not being of retirement age yet, I couldn’t justify having a Daily-type vehicle to take the kids to school, double-park at the shopping centre or hustle around my local hardware store. Perhaps in another 10 years when the kids have left home (fingers crossed) and we can enjoy the open road on a regular long-term basis, then, I reckon the dual-cab Daily with an alloy tray and removable camper module would be the perfect vehicle to see every square-inch of Australia, with way more on-board storage than anything else available.

Alas, I’ve just shelled out for a Land Cruiser Troopy, as a second choice. I still want one a Daily, though!

Daily verses 200 Series Cruiser
To give you a fair idea on exactly how large the EVA Iveco Daily 4x4 really is, we dumped a 200 Series Land Cruiser next to it … I’ve never had cause to describe a 200 as small before!

Initially, the standout difference with this particular Daily was the rather tall, stark fibreglass shell of a motorhome unit perched on the back.

Aside from that, while the Daily is larger in all respects compared with the Cruiser, it’s not ridiculously huge like some other truck-based 4x4 motorhomes. Still, you won’t be driving into underground parking garages, and keeping an eye out for low branches on the tracks will quickly become second nature.

The pictures tell some of the story.