THERE's an easy way to avoid the old Toyota versus Nissan argument – and that’s to own one of each. Well, that was Craig Perry’s approach.

See, Craig’s owned a highly-modified 105 Toyota LandCruiser for a while, but it wasn’t exactly ideal as a daily driver for his job as a project manager. He still needed to carry heavy equipment and negotiate sandy construction sites, so a sedan was out of the question, as was a 200 Series.

“A 200 Series would have been nice, but they’re getting pretty pricey and I purchase what is suitable at that time with regards to my budget and what the purpose required,” said Craig. That’s when he came across a pristine 2005 GU 3.0-litre Patrol that offered all he needed in comfort, space and toughness. 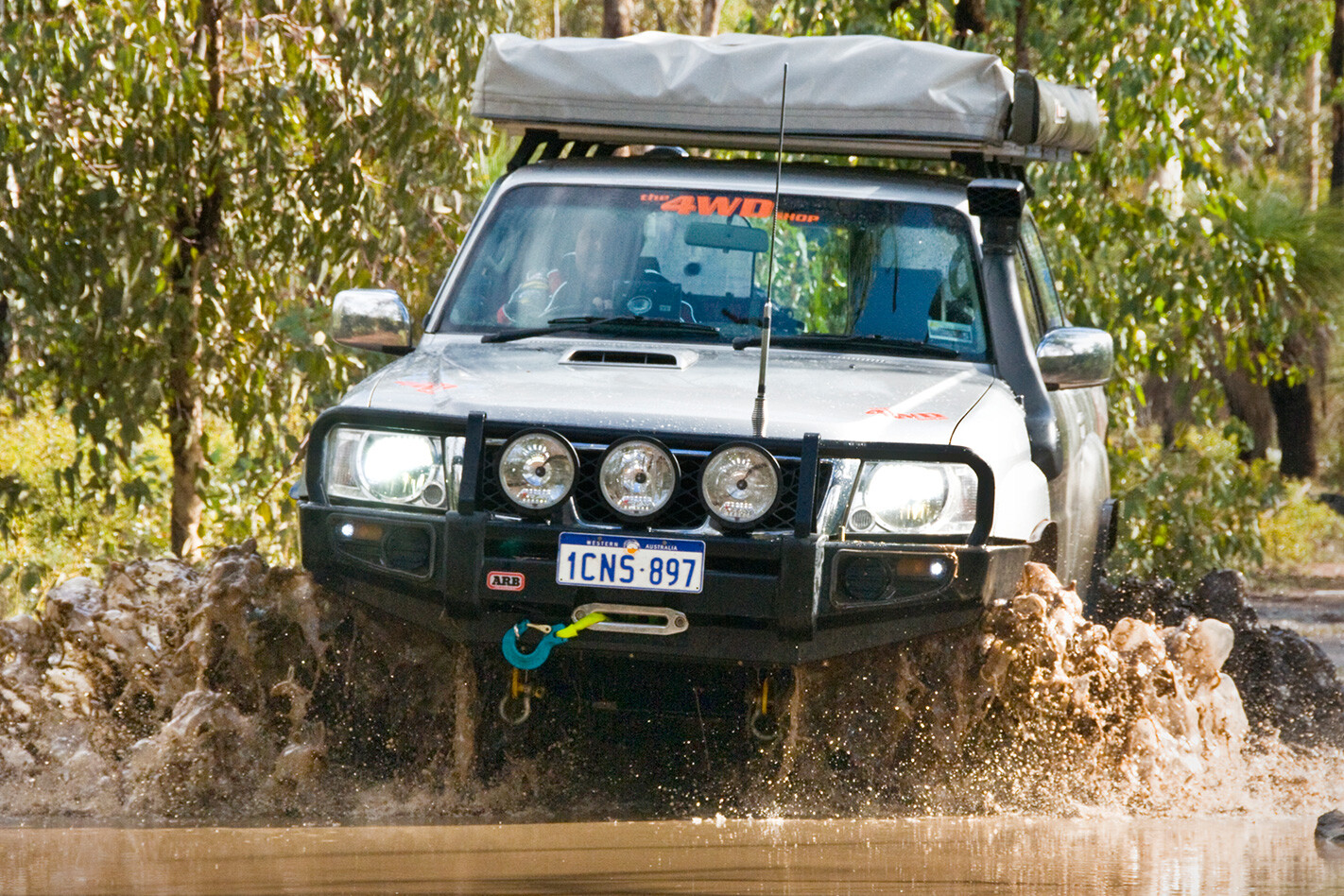 While enjoying the more refined on-road manners of the Patrol compared to his highly-modified LandCruiser, Craig decided that a couple of small improvements couldn’t hurt, just in case he needed to go a little way into the bush.

Keeping the mods simple, at least initially, Craig installed a set of BFG KM2 muddies on black steel rims and some heavy-duty covers to keep the seats clean for the weekday business duties.

From there, however, things started to escalate. A 50mm heavy-duty King Springs lift kit complete with Bilstein shocks seemed like a natural enough addition while, to take care of the geometry changes and to help keep things centred after the lift, Superior [Engineering] adjustable Panhard rods and a heavy-duty steering rod, were also added.

Having the new capability meant the Patrol could venture further into the bush, which might expose the new toy to sill damage, so Craig’s mate Daniel came up with a set of custom-made rock sliders.

But as able as the Patrol was off-road, it also needed a few creature comforts. So, in went a 40-litre Engel mounted on a Bushranger fridge slide. Then came some Frontrunner rear drawers to provide storage for recovery equipment and camping gear, some overhead LED lights and extra 12V sockets. 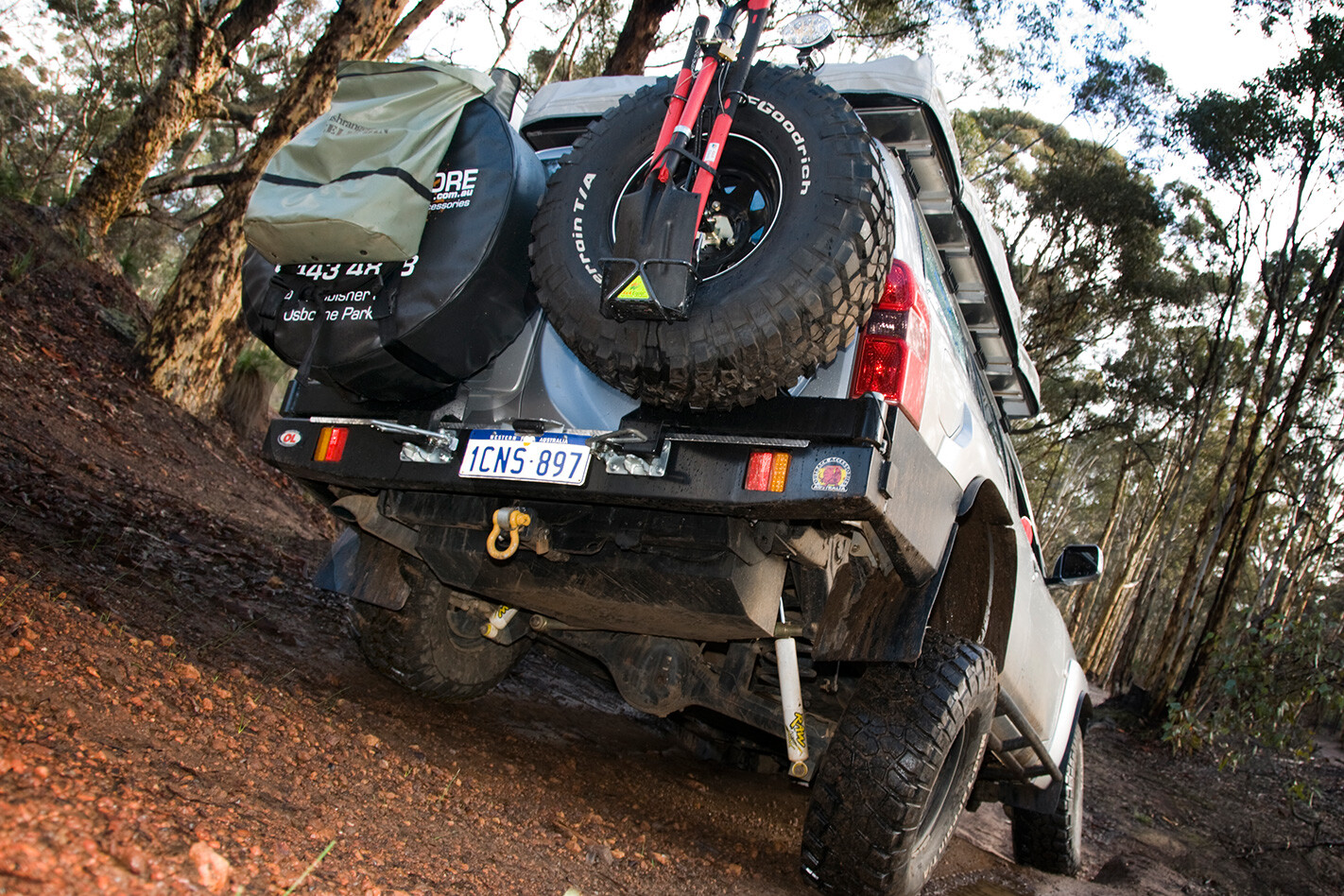 And, if Craig needs extra space on the longer hauls, he’ll just remove the rear seats and fit a second fridge (a 40-litre Waeco) and a 40-litre water tank.

For those overnight stops, the Patrol is fitted with a roof-rack-mounted full-length Outback Campers rooftop tent that houses a 150mm high-density foam mattress. There’s also a Foxwing awning fitted to the passenger’s side of the roof rack.

For entertainment on long drives, the Patrol sports an Alpine DVD head unit, a 900-watt five-channel amp, four Alpine door speakers, and a 12-inch subwoofer in a custom-made carpeted box at the rear. To keep in touch, there’s a GME UHF radio with concealed speaker in the upper dash compartment. Keeping everything powered up and also ensuring there’s sufficient starting power in the morning, Craig has added a second (deep-cycle) battery and a Redarc isolator.

To help Craig stay on course, he’s fitted a 180mm touchscreen on-board GPS loaded with OziExplorer, Hema maps, Australian topographic maps and the WA Land Management maps. And, given Craig and his Patrol can pretty much navigate to any remote location, he’s added some extra get-home ‘insurance’ in the form of a Warn Magnum 4000kg winch fitted with 30 metres of 10mm plasma rope and an extra heavy-duty winch hook. 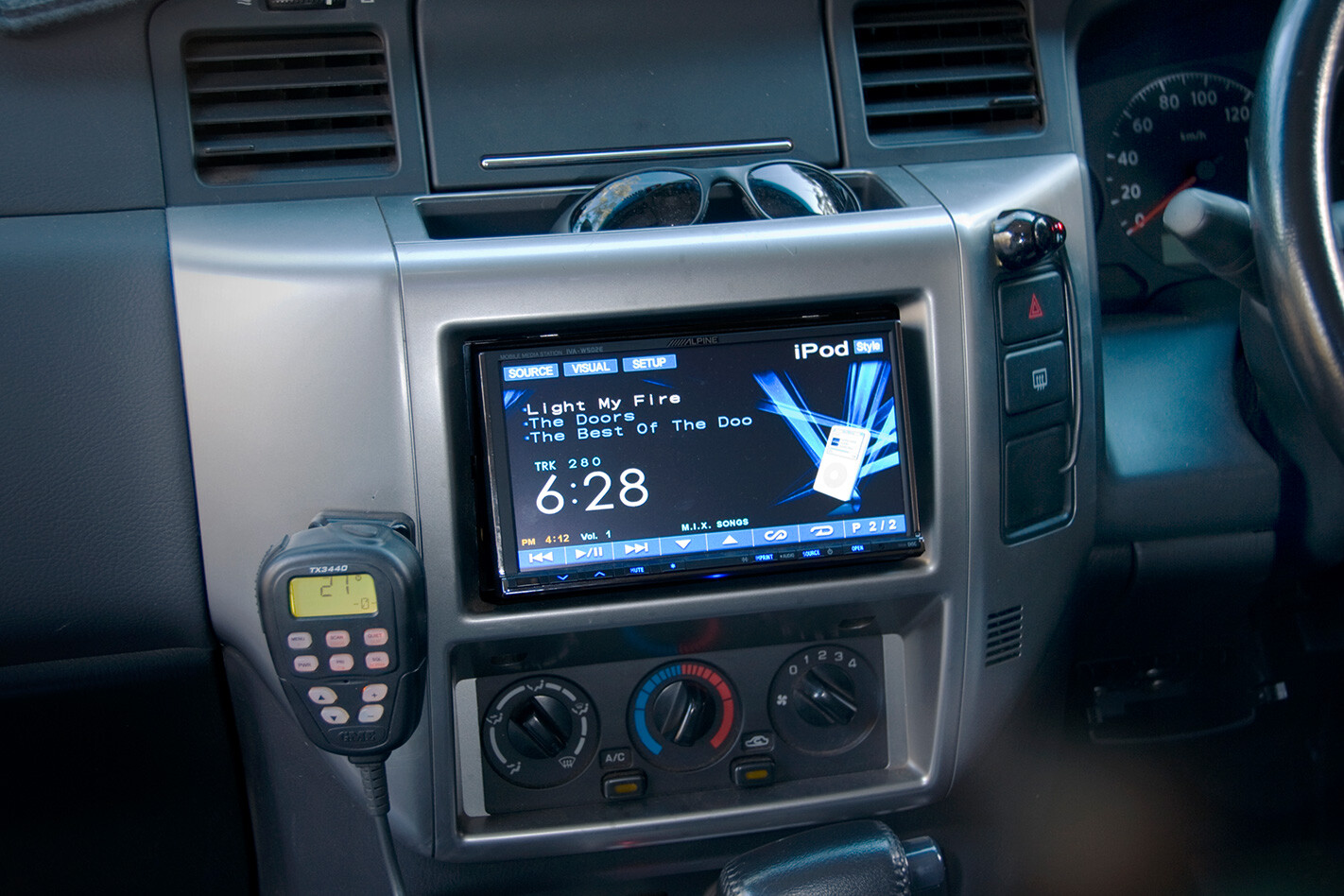 Concerned about the weight of the 35-inch mud tyre hanging off the original back door mount, Craig fitted an Opposite Lock dual rear-wheel carrier, which also gave him somewhere to fit a shovel and an axe, plus a super-bright XRay Vision LED reverse light on a telescopic bracket.

So, by now the supposed daily drive was looking remarkably like a custom tourer. Luckily, Craig changed jobs and got a company car, so it just wouldn’t have been right not to finish off the Patrol, especially when a good mate offers you his Lock-Rite auto locker for your front diff at a bargain price.

While the GU’s auto-locking front hubs work fine in standard form, Craig found they got a little flustered when working alongside the more aggressive auto locker and replaced them with some quality manual locking hubs. But the rear was left alone; the Patrol has one of the best rear limited slippers in the business.

To ensure the GU didn’t run short on fuel on longer runs, Opposite Lock in Jandakot fitted a long-range fuel tank that increased the fuel capacity from 90 to 148 litres. 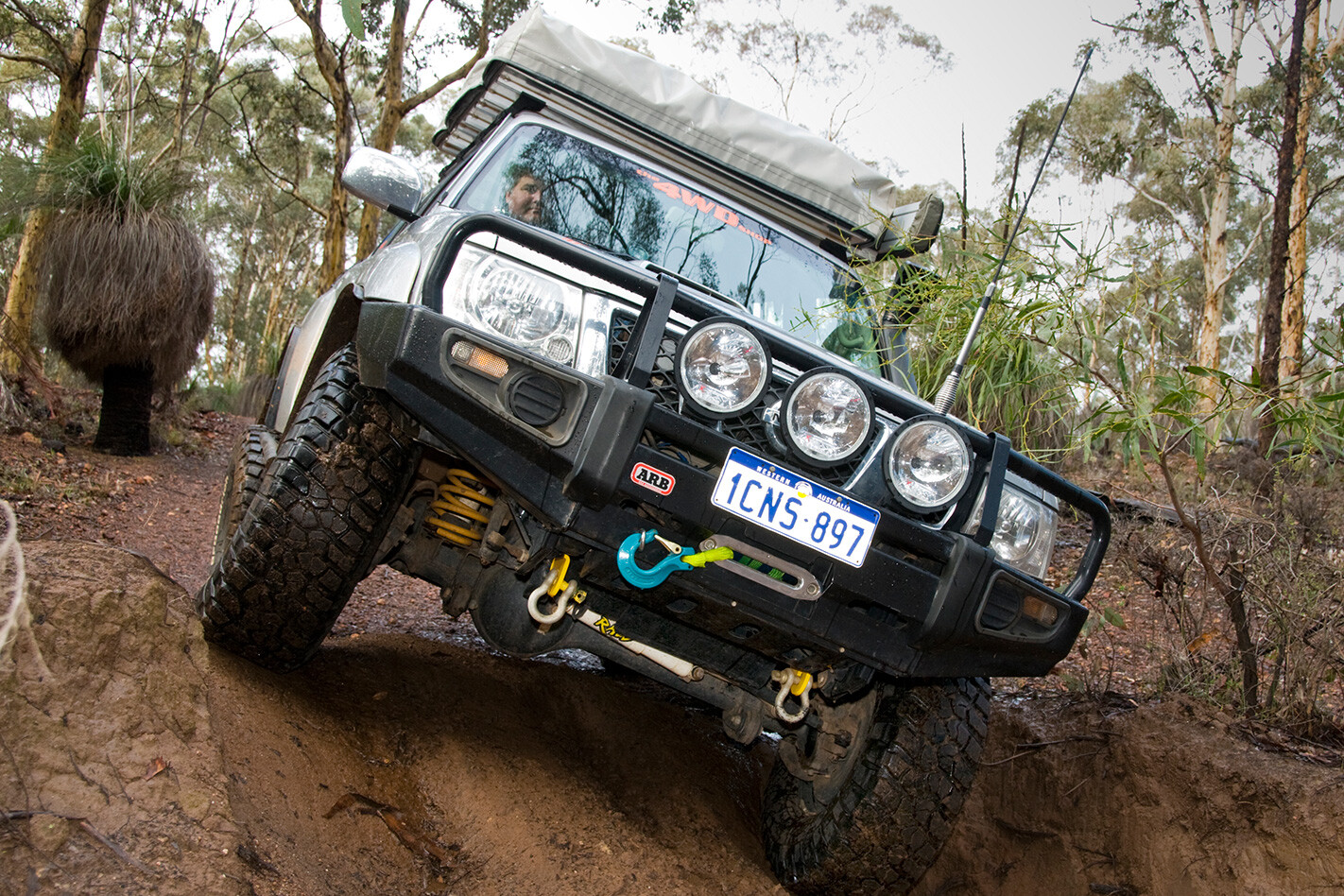 Unfortunately, after all the other mods, what lift the Patrol may have had previously was all but gone, so Craig decided that the suspension needed a little more tweaking – the front was upgraded to a 75mm King Springs lift and the rear to a 100mm EFS heavy-duty lift. The result was not only a more level ride, it also minimised the body lean around corners that tends to plague many of the heavier rigs.

The new lift eliminated many issues and provided better articulation, but there’s always a trade off. Changes to the front-end meant the Bilstein shocks were running the risk of insufficient travel when negotiating rougher terrain. Enter a new set of three-degree castor correction bushes and some Raw Nitro Max shocks which could easily accommodate the extra lift.

In the few months that the Raw shocks have been fitted, Craig said “they’ve performed extremely well both towing the caravan and traversing some hard off-road tracks”.

When Craig told me that the Patrol’s GVM can range between 2800 and 3000kg – depending on whether it’s set up for touring or day trips – I was impressed with the performance when driving on the road. The acceleration was strong and responsive and passing slower vehicles was effortless.

As I glanced over at Craig, he knew exactly what I was thinking. Without me saying a word, Craig responded with a chuckle: “No, it’s not a stock 3.0-litre”. 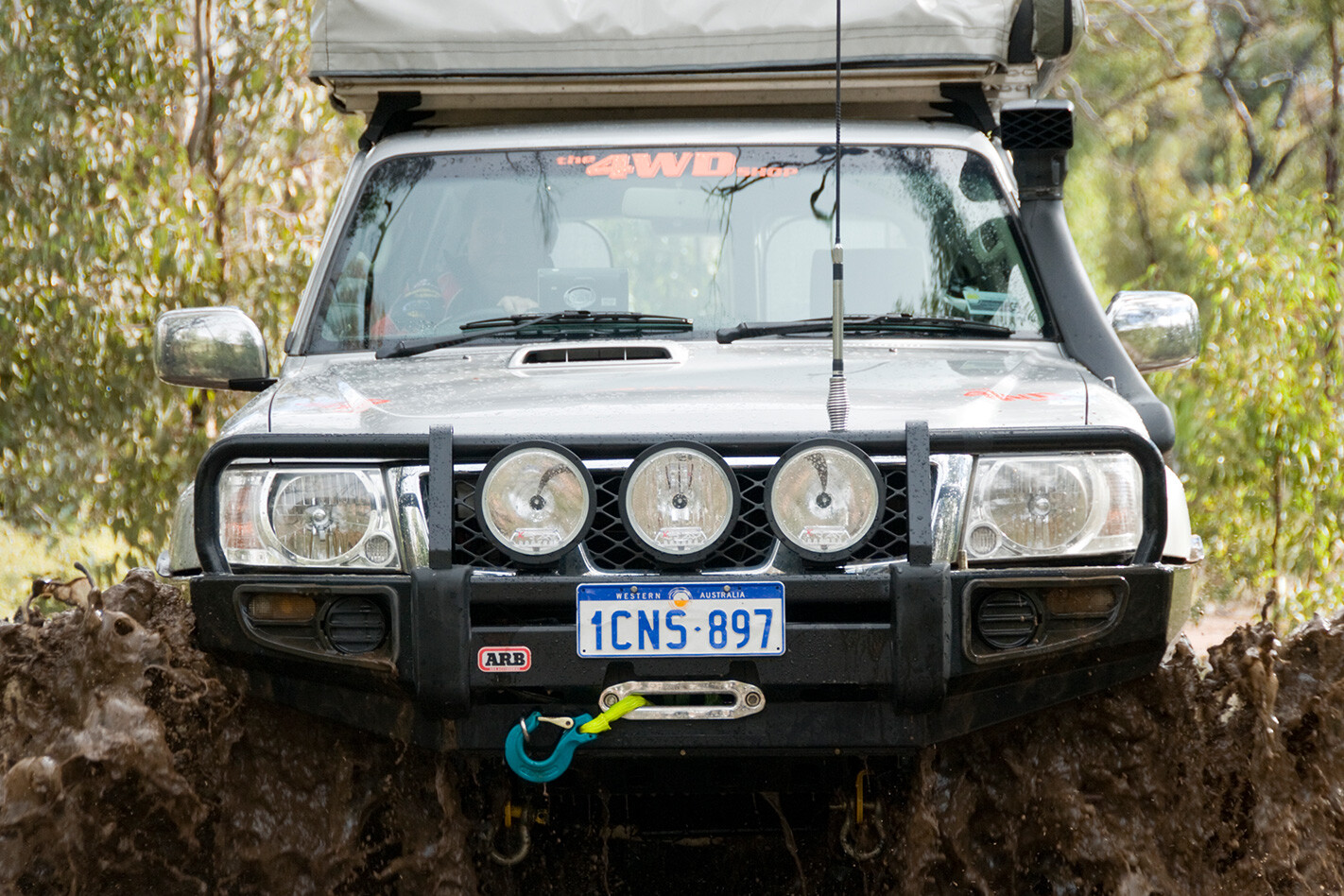 Having spoken to other owners of 3.0-litre GUs, Craig was keen to address the issues he’d experienced such as erratic over-boosting and the oiling up of the mass airflow sensor. A Taipan catch-can took care of the oiling problems, while a Dawes valve helped limit boost to a max of 16.5psi. After installing a few extra bits and pieces, the turbo now provides a linear delivery of power rather than the previous all or nothing delivery.

There’s also a Rapid performance chip, a 75mm Taipan mandrel-bent exhaust and a Cross Country 4x4 air-to-air intercooler with its own dedicated fan to help reduce intake air temperatures. So he can keep an eye on things, Craig has also fitted a boost gauge and a pyrometer.

So, what’s the Patrol pushing in numbers? Thanks to the lads at United Fuel Injection in Perth, the Patrol is achieving 125kW and 400Nm. We’ve heard of owners getting significantly more than this, but this Patrol is set up for reliability, not the dragstrip. Even the auto ’box got the once over.

There’s a manual override hooked up to the torque converter allowing him to engage the lock-up function in any gear. The upswing of this is he can lock up the converter when towing the van, minimising slip and reducing the overall transmission temperature. The final mod was to the control circuit. With increased line pressure the change points allow for a few more rpm keeping each cog swap right in the engine’s sweet spot.

Having waited out the rain multiple times for these photos, it was inevitable that the long trip home was going to be well after dark. Of course, that’s not a problem for this tourer. Up front there’s three new Britax 50W HID spotties, while the standard lights have been upgraded with XRay Vision H4 HID conversion kits. 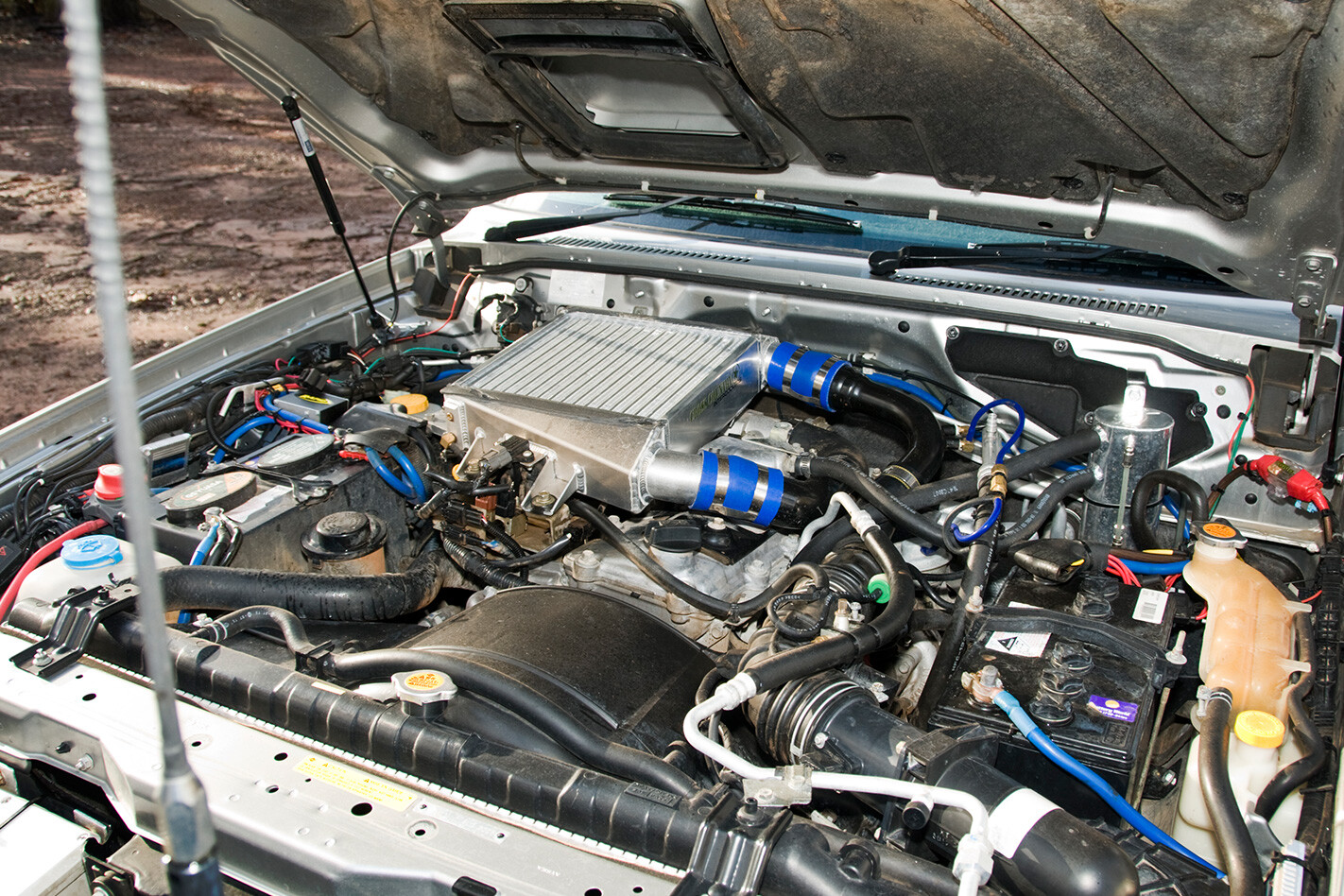 Craig’s pretty pleased with the outcome: “The performance and useability of the Patrol has increased considerably, due to a combination of accessories working together. The suspension has improved both on- and off-road stability and capability, but the standout items would be the Rapid Chip, the Cross Country intercooler and engine performance equipment, which really unleashed the Patrol’s hidden potential.

The most significant changes were fitting the rooftop tent, which provides a quick and easy set-up that’s dry, warm and very comfortable. I’m very fond of good quality music and the Alpine stereo is a real bonus. Singing along to your favourite tunes is one sure way to stay alert on those long hours behind the wheel. And, thanks to the

XRay Vision lights, I no longer suffer from tension headaches that you typically get by straining your eyes peering into the darkness ahead.” 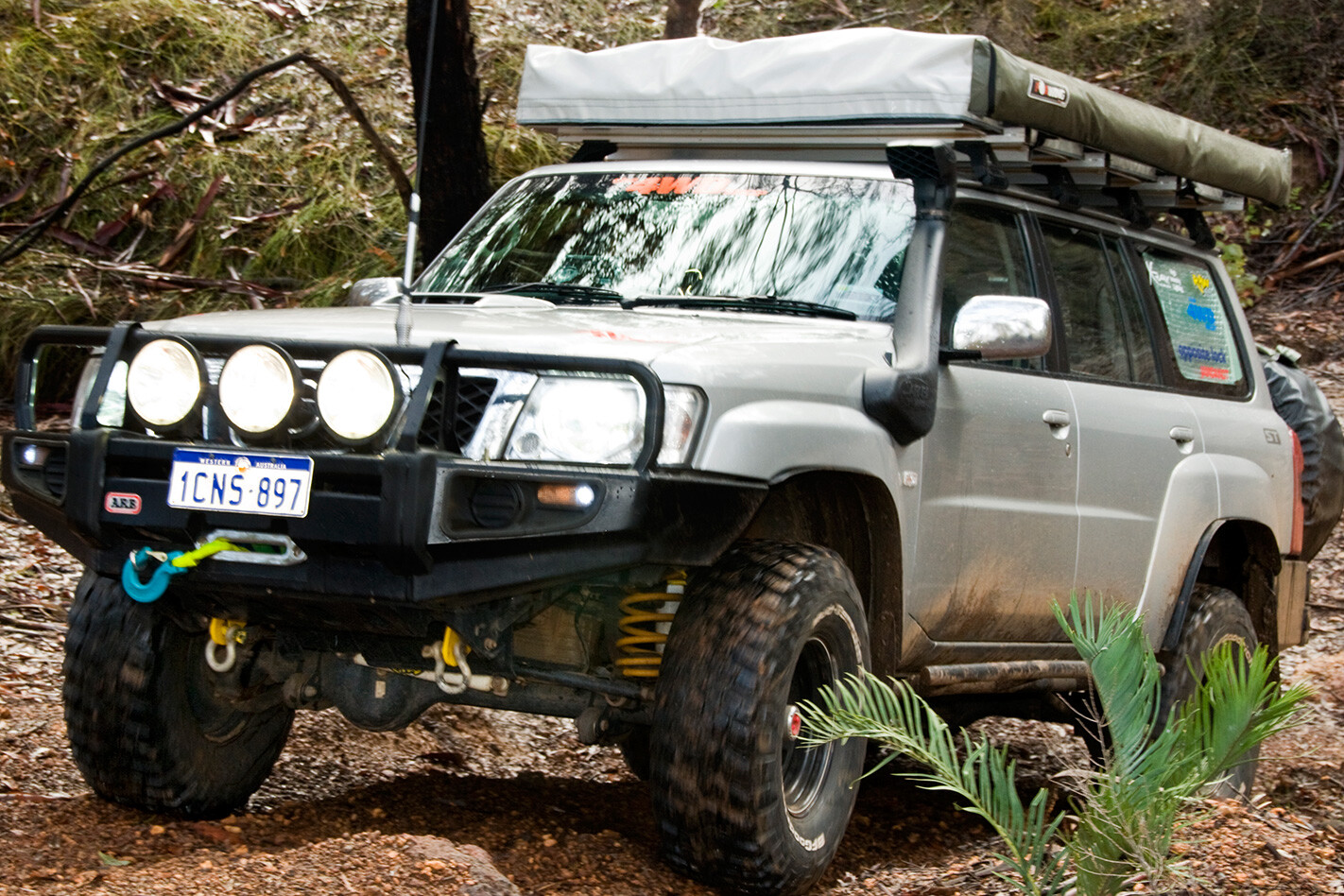 Craig is appreciative of all the help he’s had along the way. “The fitting of the long-range tank, Taipan exhaust and castor bushes were completed by Chris and Scott from Opposite Lock, in Jandakot. Many of the performance upgrades such as the Rapid Chip, the intercooler and engine tuning were done by Matt Craig at United Fuel Injection, while all the other work has been completed by me in my garage, sometimes with some help from my mate Daniel.”

Craig also wants to thank Mick and Dave from The 4wd Shop in Redcliffe, and Greg and Ross from XRay Vision Lighting.

This is one impressive outcome. It’s reliable, comfortable and more than capable of dealing with any touring duty Craig may undertake, with trips planned for the Holland Track, the Anne Beadell Highway and to the south-eastern WA coast along the Great Australian Bight. 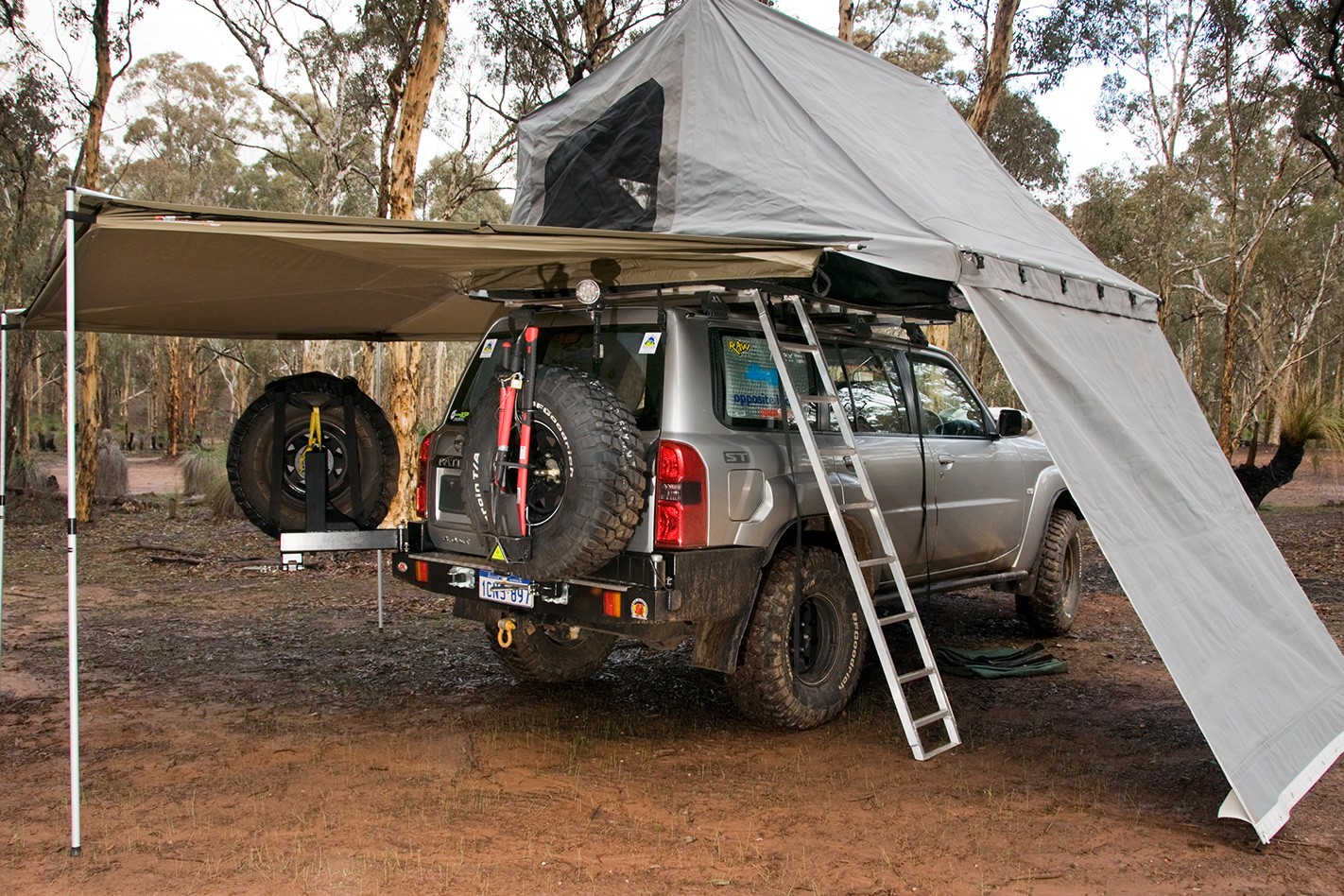 I couldn’t resist asking if he had anything else planned for the Nissan. “A second long-range tank to replace the reserve tank would give me about 220 litres,” he began.

“Perhaps an Opposite Lock E-Locker to the rear differential. Oh, and I’d like to replace the steel rims with 16-inch alloys to help reduce the unsprung weight. Of course, fitting an LED light bar under the leading edge of the rooftop tent would provide a real boost to the lighting, but the big test will be getting my wife’s approval for the Duramax V8 turbo-diesel engine!”