HAVE you priced-up kitting out a new 4x4 these days?

Tick the boxes for just the basics like big-name bullbars, fancy alloy wheels and laser-beam driving lights and you’re quickly looking at an invoice in the thousands. Hell, open the chequebook and that figure could climb even higher. Sure, you’ll end up with a killer 4x4 with all the good bits, but is it the best way to spend your hard-earned?

A boilermaker by trade, Queensland native Jamin figured he’d rather sink his hard-earned into travel than accessories, so he fired up the welder, dusted off the grinder, and set to work building the well-travelled Holden Colorado you’re looking at now. While the RG Colorado looks far from stock now, Jamin picked it up brand-spanking new just three years ago. Since then, he’s pieced it together one modification at a time to get it ready for serious exploring. We’ll kick things off at the top with the unmistakable roof-mounted tinny.

Boat loaders aren’t unusual, but they’re not normally something knocked up by the owner themselves – even rarer are ones that kick up and out of the way with a set of gas struts, to allow the roof-top tent to fold out for the ultimate beach camp set-up.

The custom set-up is zapped together with a combination of box-tube and sheet steel, and it bolts directly to the factory tub. The unique arrangement also houses a set of traction boards on the driver’s side, with the passenger side stowing a high-lift jack and long-handled shovel.

Both sides lift up revealing the bush-proven camping set-up nestled inside, where a set of Titan alloy drawers hold everything from recovery gear to cooking equipment. There’s also a Waeco CF80L fridge strapped down to the included fridge slide, while the Mercury outboard engine finds a home between heavy-duty tie-downs. 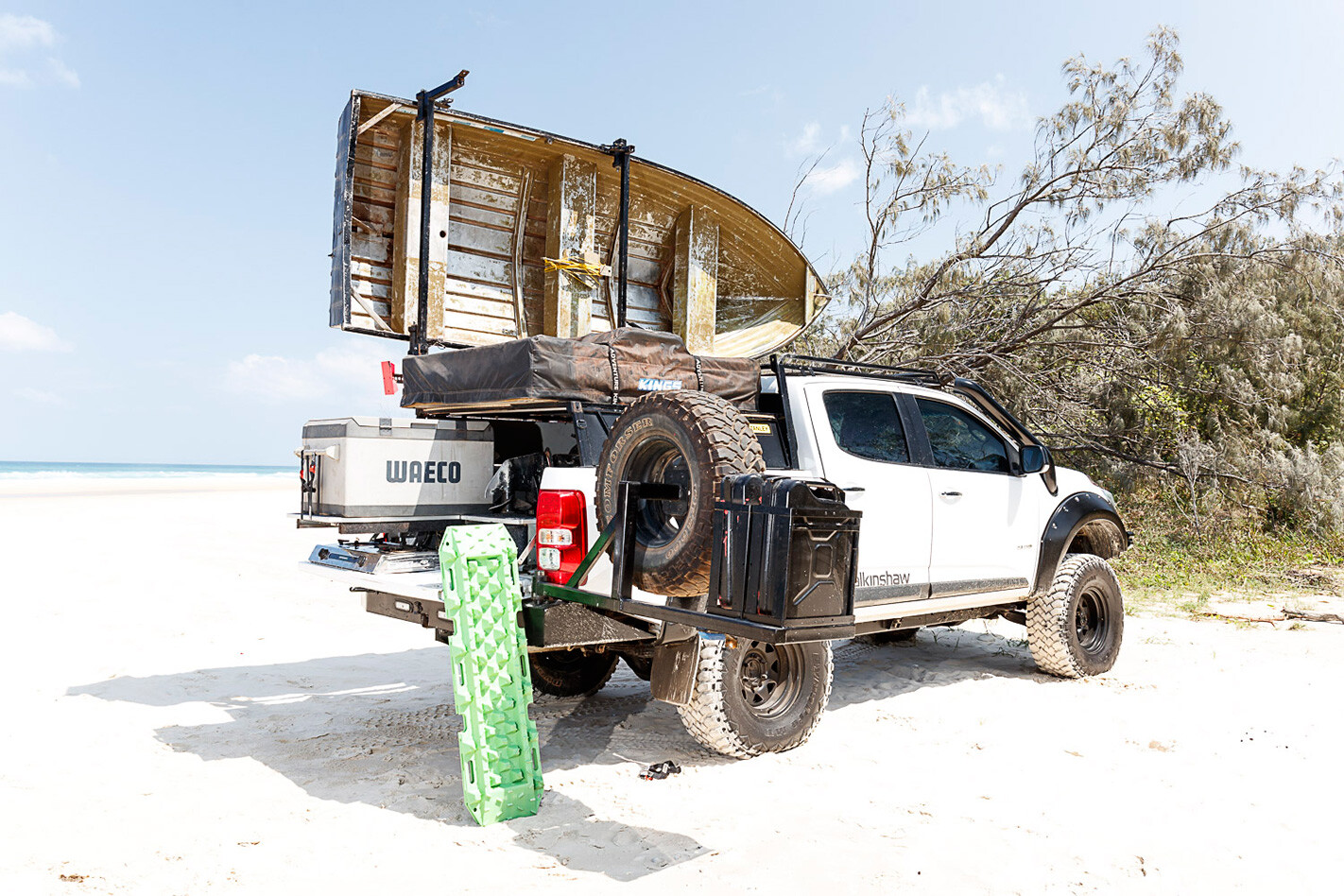 The fridge is fed a constant supply of power thanks to a second battery tucked away inside a box behind the drawers, with a 20A Thunder Auto DC-DC charger keeping the lights on. Before calling job done on the Colorado’s rear end, Jamin fired up the trusty grinder again, this time to lose the rear quarters on the tub.

Replacing them is a seriously stout DIY rear bar incorporating twin jerry can holders and a swing-out tyre carrier. With the spare tyre up and out of the way, Jamin was able to slot in a 70L water tank and 12V water pump set-up.

Moving down the flanks of the RG, Jamin fired up the welder again, this time in the form of a one-off basket-style roof rack. It’s lined with tight-knit wire mesh, so it makes the perfect place to store extra camping gear – it also houses a roll-out awning for those sunny days on the tracks, which is really handy.

At the pointy end of the Holden is a bullbar unlike any you’ve seen before. “It was one of two prototype bars a small company knocked up,” Jamin told us. “I used the foundation then cut and shut it to my specs. I’ve added all the top hoops, too, and reinforced the bar to run a larger winch than it was designed for.” 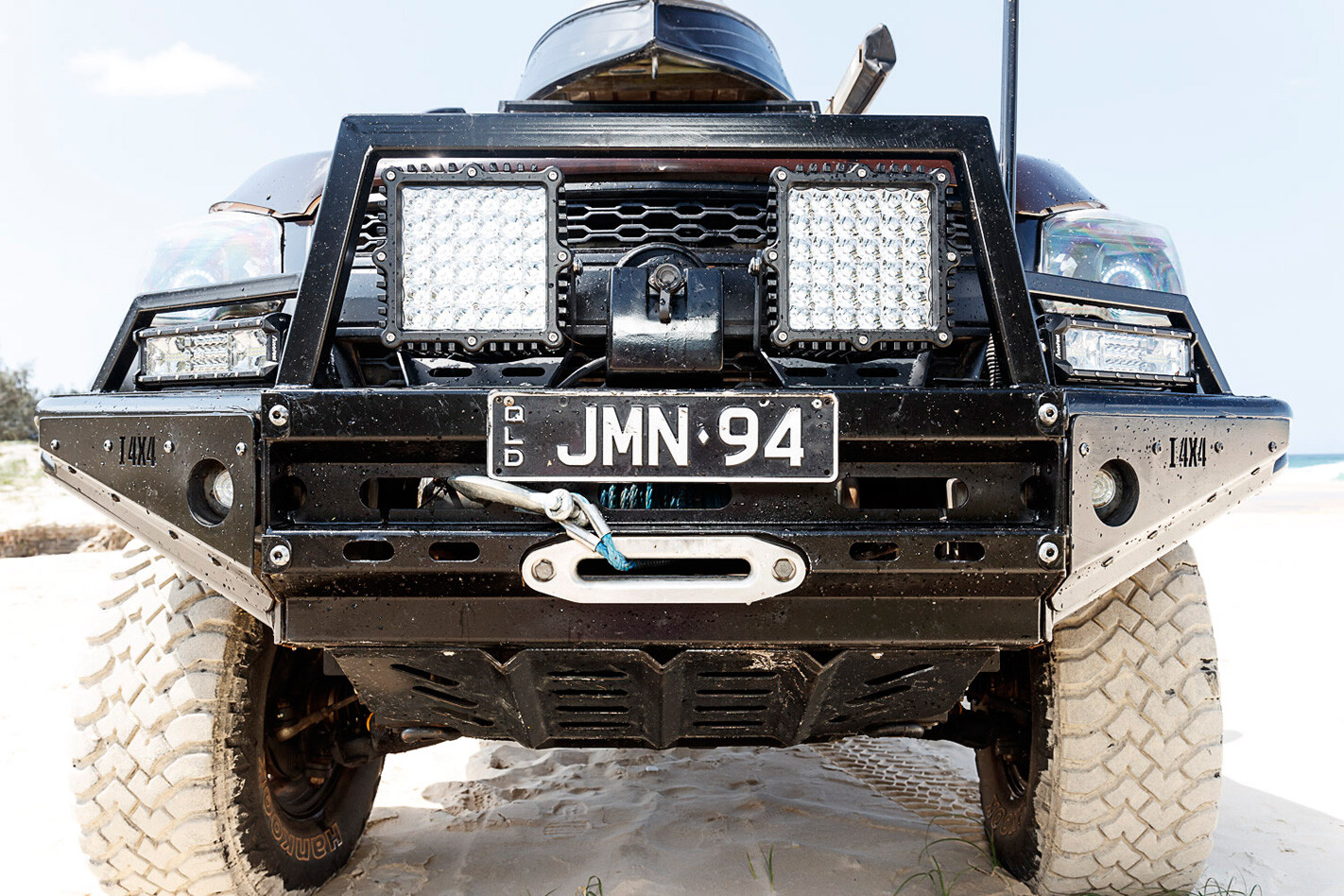 That larger winch is a Tigerz11 12,000lb unit wrapped in synthetic rope. The credit card also got swiped for a set of no-name LED spot lights front and centre, with a set of matching LED light bars off to the side lighting up Jamin’s peripherals for stray ’roos.

The lighting package is rounded out with a set of projector lights replacing the stock headlights, giving the Colorado an updated look and adding extra reach before the spotlights need to be called into action. The huge factory wheel arches front and rear have been stuffed full of 315/75R16 Hankook Dynapro tyres, which puts them around 34.6-inch.

Wheels are classic Dynamic 16x8 -22 steelies, and Jamin fit a set of Kut Snake over-fender flares to keep the wheels within the confines of the body without attracting too much attention from Mr Plod. Of course, all the flares in the world won’t help if the tyres physically don’t fit in the wheel arches, so a significant altitude adjustment was required.

After a lot of planning and careful measuring the body is now sitting a full 50mm higher above the frame thanks to a body lift front to rear. The front suspension copped an additional four inches with a set of adjustable Bilstein shocks and coils. 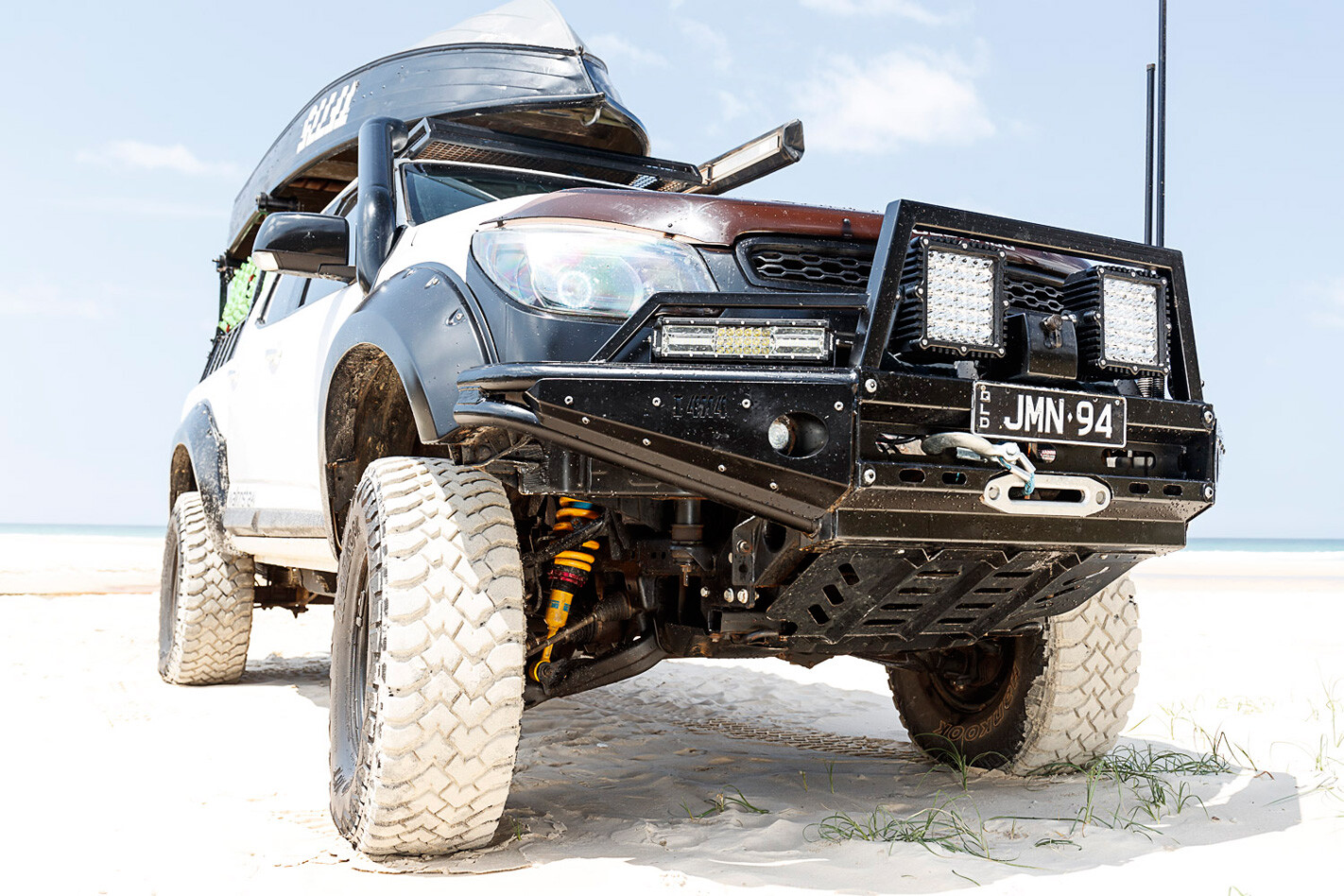 Adjustable upper control arms were also called for to get the wheel alignment back into spec, while a custom diff-drop was needed to flatten out the CV angle and avoid premature wear. The rear copped a similar lift, though this time it’s in the form of 300kg constant load EFS springs backed up by a set of Snake Racing extended shackles.

The original shocks were soon turfed after finding they couldn’t cope with the new-found rear articulation, and in their place are a set of off-the-shelf extended shocks. With such an extensive list of touring modifications you’d be forgiven for assuming there’s a host of go-fast goodies under the bonnet to move it all along – “it actually makes plenty of power stock,” Jamin told us.

With 500Nm right out of the factory floor, the 2.8L Duramax easily outclassed every other dual cab ute in terms of sheer grunt when it first came out, even muscling around the 4.5L V8 in 70 Series Cruisers.

Of course, Jamin isn’t a leave-it-alone kind of bloke, so despite the Duramax punching out plenty of grunt in stock form it still copped a three-inch turbo back exhaust system for a little extra bark, while the stainless snorkel and airbox help improve airflow. Swing open the doors and it’s immediately clear the Collie copped plenty of attention on the inside. Navigation is taken care of by a VMS GPS unit, while comms are handled on two fronts: A GME UHF allows easy communication in convoy or to other 4x4s, while a Bury unit helps keep Jamin in phone range as long as possible.

To cut down on road noise and make it more comfortable for long black-top days, the interior was gutted before being fully lined with Dynamat sound deadening and pieced back together. A set of ubiquitous seat covers also got the nod, but before Jamin could call things done he took to the centre console with a grinder to install an 8L Waeco centre console fridge.

We’ve come across plenty of big-dollar builds here at 4X4 Australia and, sure, they’re always exciting. However, it’s easy to forget that the whole purpose of buying and building a 4x4 is to get you exploring and enjoying Australia, and that’s something Jamin has hit head on with his DIY tourer.

EAGLE-EYED RG Colorado owners might notice there’s something a little off with Jamin’s front hubs. In factory configuration the RG Colorado utilises drive-flanges permanently connecting the wheels to the rest of the drivetrain (like most modern 4x4s).

It’s a fool-proof solution, but the downside is the CV joints are constantly spinning, as is the diff centre. A free-wheeling hub allows you to physically break that connection when 4x4 isn’t required, resulting in less driveline drag as well as less wear and tear on the CV joints and front diff.

After fitting a set of factory Aisin free-wheeling-hubs off an older TF Rodeo, Jamin’s seeing fuel figures as low as low as 14L/100km on 35-inch tyres when towing a 1500kg caravan. Jamin took to the bar himself and now a larger winch and LED spotlights feature. Projector lights also replace the stock units. Chilling the soft drinks on the inside is another Waeco fridge. This time an 8L unit sits where the centre console used to be. 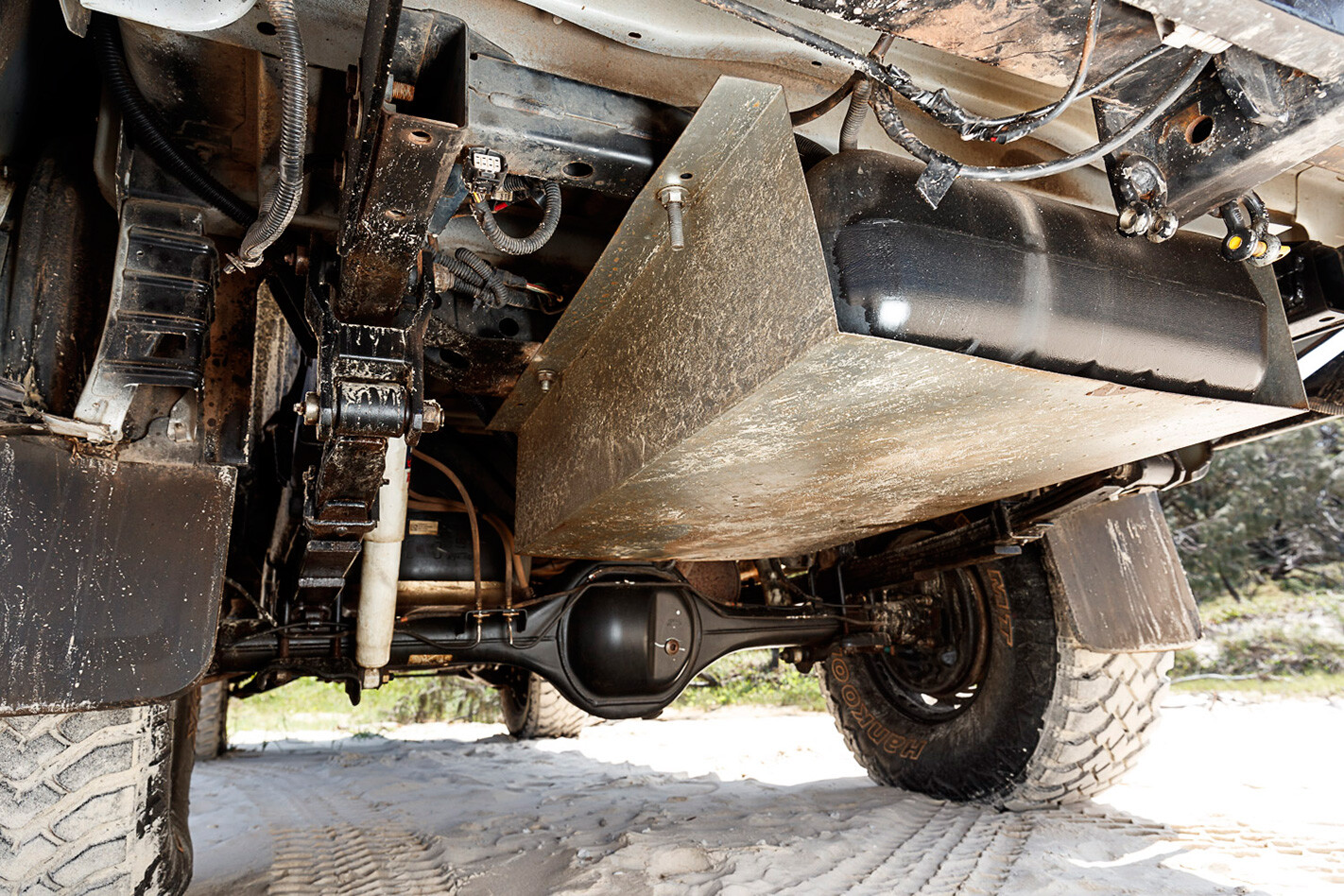 A 70-litre custom water tank is tucked neatly under the tray and behind the Jamin-built rear bar. 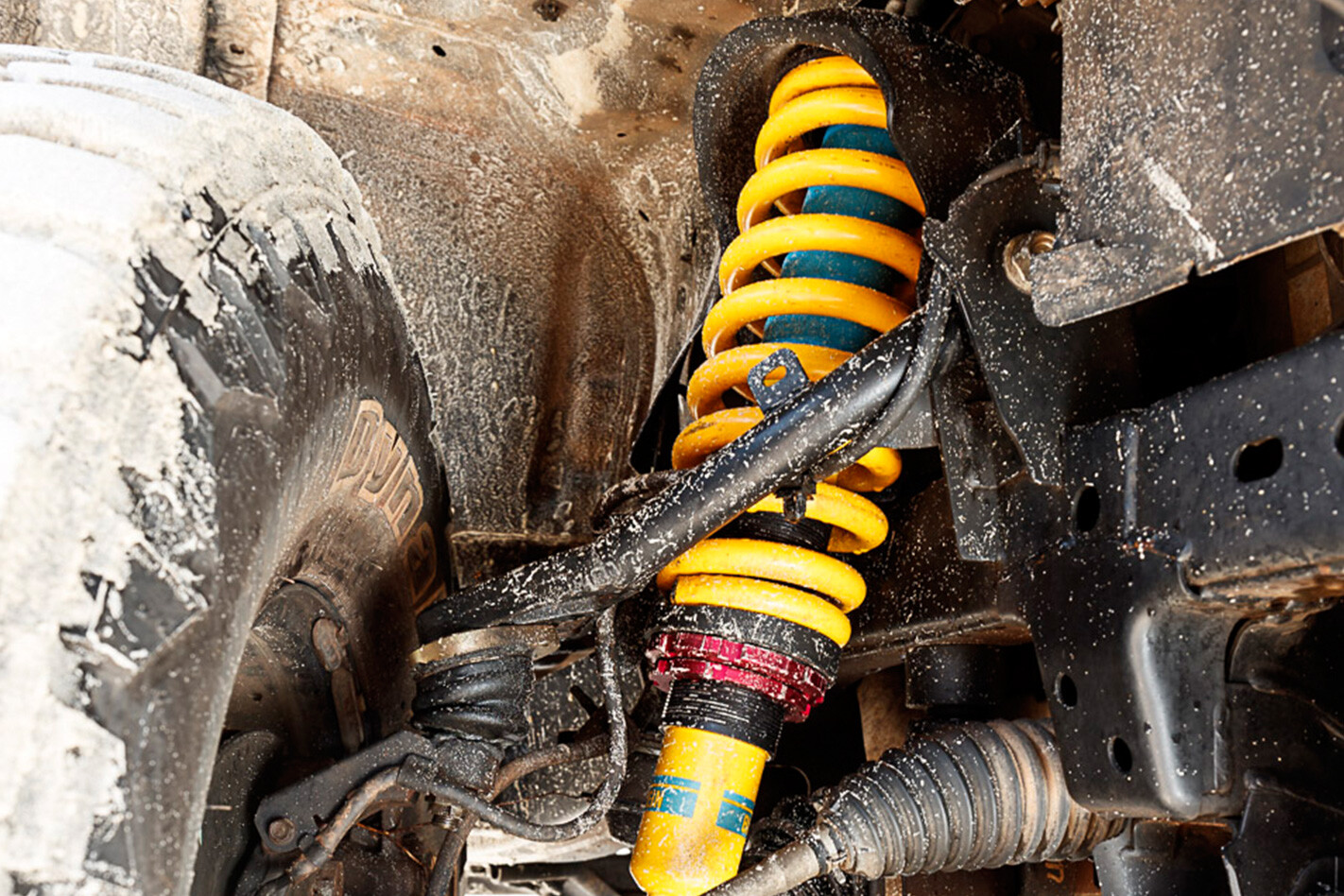 A four-inch lift was aided by new Bilstein adjustable shocks and coils (front) and EFS lift springs and extended shackles (back).