Over the last four years, it has been an annual tradition for Tony Carvallo and Fred Williams to work on building Jeep vehicles together for the annual Easter Jeep Safari at Moab, Utah, USA.

The tradition is that Tony comes to California, he helps out Fred, and every year Fred promises Tony that they will go to the brewery and do something fun. Well, what’s more fun than playing with Jeeps? And Tony is still waiting for the opportunity to visit the brewery. He likes to joke that the brewery doesn’t actually exist because he has yet to see it. Two years into their annual Jeep build tradition, Fred and Tony were conversing on the phone during one of their creative brainstorming sessions and loosely talked about doing something with the next new Wrangler.

Over the years, Brittany and I have gotten to know Fred and Tony well. They’re a little bit silly, always down for a good time, and really good at the work they do. Brittany and I caught up with Tony and Fred to chat about the creation and evolution of the CODE1 on its first visit to the red rocks of Moab, Utah, for the Easter Jeep Safari.

AH: How did this idea come about?
TC: I asked myself how to condense fear of the new. The new Wranglers typically were not welcomed with open arms. With the YJ, people said, ‘Oh no! Square headlights!’ With the TJ, people said, ‘Coil springs on a Jeep?’

With the JK, people said, ‘That thing is too big for the trail!’ And I said to myself, ‘What about the JL?’ Working on developing the new JL for Jeep as the JL Product Planning Manager, it was a project that I put so much blood, sweat and tears in. Fred and I wanted to do something cool with it on our own, without support of major builders or Jeep corp, to show that anyone can easily modify the JL.

AH: The CODE1 sketches are amazing!
TC: It’s very funny, because growing up as a kid, I would get in trouble for doodling and sketching Jeeps during class. It was always Jeeps! I still can’t draw people, but I’ve gotten good at sketching Jeeps!

AH: This “Jeep thing” is in your blood?
TC: I knew I wanted to work for Jeep since I was 10 years old. I was close to graduating (and) I sent my resume to HR 1000 times. At the time, I was working making pizzas and serving brews at the college brew. Shortly after, I got an interview at Jeep. I worked for Jeep ultimately for my passion.

AH: You worked for Jeep for 18 years, and now you’re on a new adventure?
TC: I love the JL so much, I just wanted to take it to the next level. It’s funny because I have this personality that once I finish a project I have to do something next.

My mission has always been, I set a goal and I go do that. I set another goal and I do that. Without goals I get kind of lost. It’s kinda crazy because the stars aligned. I always wanted to live in California and be close to the world of off-roading. It was like a dream come true. I currently work for Dynatrac as an engineer.

AH: Tell us about your ideas on developing the CODE1 with Fred.
TC: There are two key items that Fred and I totally planned out on the new JL. Fred said that it had to have 42-inch-tall tyres and I loved the idea of a two-door stretch LJ, so we thought we’d start with a four-door JL and take off the rear doors. The Dynatrac ProRock XD60/80 axles definitely gives the vehicle a significant performance increase; that was very helpful on the red rocks in Moab.

AH: Is this the first time the CODE1 has been to Moab?
TC: Although we were tempted to visit Moab on our road trip from Detroit to California after we purchased the JL, we were on such a time crunch. We waited in Michigan for almost a week to pick up the JL we had ordered. We couldn’t wait anymore for the JL we had ordered, so last minute we located a dealer that had a JL Sport model in Ohio.

The JLs were literally selling as soon as they arrived at the dealerships. We rushed to Ohio to buy this silver one. So yes, it’s the first time it’s been in Moab. It really stood out in Moab because it was the first JL built to this extreme level, with a really unique green colour. The JL platform is awesome, it is the ultimate canvas.

AH: Are there any things you were worried about during this build?
TC: I was worried about the whole thing. We definitely had a deep concern for the new power electric steering because it is brand-new on Wrangler. We also had a few issues with the transfer case, but I took the transfer case apart and worked some magic. AH: How did you fit 42-inch-tall tyres on the CODE1 while maintaining the original fender flares?
TC: We went with a four-inch lift from Off Road Evolution and used MOPAR fender flares that allowed us to fit larger tyres.

AH: You guys were the first to modify a JL, and you guys did it fast.
TC: Yes! There was very little sleep during this build, but we would sleep at least four hours each night. This project took serious co-ordination. We had to make sure all of the pieces arrived on time. We did the entire build in about eight days.

AH: They say that it takes a team to make a dream.
TC: We had such a great team to help us get the job done. Mel and Drew from EVO helped for two days. Bestops’ Fernando came with an industrial sewing machine and made the custom top in one day. Jason from Hans came and helped for two days. Aaron from Baja Designs came out for two days and provided the CODE1 with lights, and he came with tons of parts and pieces to make it happen. Mike Kim came with Fox, measured the CODE1 for shocks and even helped us mount our beadlock tyres. The entire Dynatrac staff were incredibly helpful and supportive.

AH: Fred and Tony, what were your thoughts about driving the CODE1 in Moab compared to a stock JL?
TC: I felt like I was off-roading a big La-Z-boy on lockers.

FW: After driving the JL in stock form from Ohio to California it’s an obvious improvement over a JK in that the vehicle is more refined and the eight-speed automatic is far better at keeping the Pentastar V6 in its power band.

Once we completed the build of CODE1, this JL has really grown up. The beefy Dynatrac axles have no issues turning the 42-inch-tall tyres, and the power and gearing seemed spot on for an all-around fun Jeep. Our biggest concern was the new electric power steering system, but even that didn’t hinder our off-road driving for the CODE1 out here.

Sure, time may eventually reveal some steering or other drivetrain or electrical weakness as can happen with new vehicles, but so far we feel the Jeep is working great. 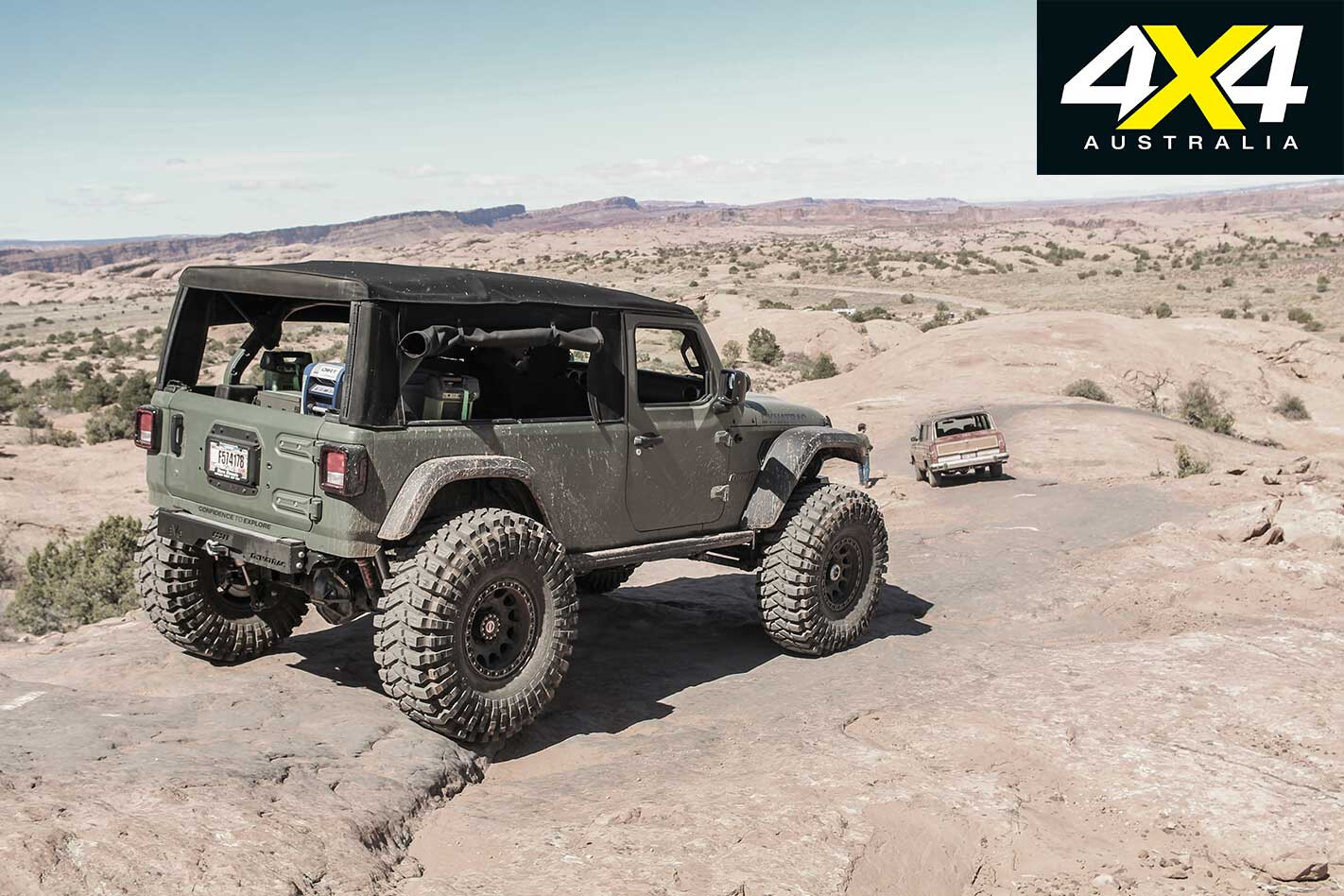 AH: Tell us about the other components on the CODE1 that made it perform so well out in Moab.
TC: It’s hard to point one. Moab is a really special place with slick rock and incredible terrain. It was really special to use the equipment we put on the vehicle. It’s one thing to modify a vehicle, and it’s another to actually use the equipment. All of the components meshed so well and made CODE1 perform so smooth and amazing on the trails.

AH: Fred, can you run us through all of the parts you guys added to the CODE1?
FW: Of course!

• Off Road Evolution: We mocked up an EVO Manufacturing front bumper and winch mount, the bumper improves the approach angle and provides sturdy D-ring mount positions. Although this was a prototype bumper, production bumpers will be available soon. We also used the first EVO Manufacturing four-inch Extreme Overlanding suspension system for a JL. The suspension uses adjustable front and rear control arms with swivel joints to set the ideal location for the rear axle. It also allowed us to have great articulation and suspension travel. The EVO Extreme Overlander suspension for JLs is available in two-inch and four-inch lifts. We went with the four-inch lift so that we could clear the 42-inch Maxxis Tyres.

• Baja Design LP9 off-road LED lights are very bright and feature both a low-beam and high-beam function, perfect for on- and off-road trail use, especially in Moab.

• ProRock XD60 axles: The Dynatrac team went back to the drawing board to find ways to increase flexibility and strength. The patented design provides the industry’s best ground clearance, yet still holds a larger differential and 10.1-inch ring gear. The ProRockXD60 uses a unique 1550LT wheel ends which reduced wheel scrub and stress on the all of the steering components, making it easier for us to steer while fitting a massive steering joint. This is one of the ways we we’re able to steer with 42-inch Treps and keep from overly stressing the factory electric power-steering pump.

• ProRock 80: It’s the ultimate rear axle upgrade. It’s the industry’s lightest axle in its class that handles the most torque and ground clearance. It can handle a giant vehicle, massive tyres and a heavy right foot. It’s really perfect for any situation thrown at us, and it’s really suitable for any of Moab’s trails.

• Bestop custom soft-top used the JL framework, but has solid-zip outside panels that can be removed or rolled up. This gives us access to the bed, but also a dark-cave-like sleeping space if we want to camp out in the bed of the CODE1.

• Fox 2.5 adjustable shocks with remote reservoirs and Dual Speed Compression (DSC) adjusters. These performance series shocks have up to 22 different settings for both high- and low-speed compression, allowing each corner of the CODE1 to be dialed in for optimal ride control.

• ARB refrigerator, storage compartments and recovery kit give us room for gear and grub.

• Hans PowerPack 300 portable power and solar generator were positioned in the cargo area for our upcoming overlanding adventures.

AH: CODE1 is a real head-turner out here in Moab.
TC: We’ve seen a lot of JLs in Moab this year, but there’s only one CODE1. It’s really funny, because the first thing people say is, “It’s the CODE1!” Then they ask me where Fred is. One of my favourite parts of this project was working on it with Fred.

MORECustom 4x4s
AH: When can we see the CODE1 again?
TC: Next stop, Overland Expo.

AH: Thank you Fred and Tony for spending some time with us out in Moab. We can’t wait to see what you guys will do together next.