The last time 4X4 Australia spoke with talented metal fabricator and mechanic Darren Vassie was about 18 months ago.

At that time he was driving a white 80 Series Land Cruiser wagon rebuilt from the ground up. He was also working for a company that manufactures camper trailers. Since then, Darren has flicked the camper trailer job to focus on his own burgeoning fabrication business and another impressive 80 Series, a blue dual-cab ute.

But while the old white wagon was built solely as a reliable and capable family tourer, this blue dual-cab has dual roles: to promote his skills and business, and to function as a family tourer when there’s time to get away from said business. 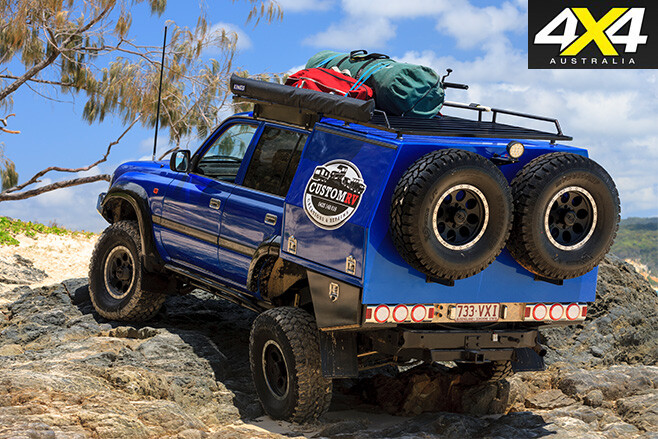 As well as building equipment for four-wheel drives, Darren also performs fabrication and repair work on trailers, caravans and motorhomes, and he’s a specialist in steel, aluminium and stainless steel welding. But it’s the 4x4s that are his real passion, and that’s how this unique vehicle came into being.

“What I’ve done with this dual-cab ute build is what I want to do with the business,” Darren says. “It’s a hobby of mine that I want to turn into a big part of the business. I thought if I’m going to go back into business again, I’d rather be doing something I like doing instead of something just to be at work.”

You might think Darren chose an 80 Series for this project because he already had plenty of experience with the model, but that wasn’t the main reason. As he puts it, quite succinctly: “I didn’t want to go with a lavishly expensive vehicle to start with, in case I stuffed it up.” And this 1993 model petrol-powered 80 Series was anything but lavish or expensive. In fact, Darren picked it up for just $3500 with a popped petrol engine. A good engine was sourced for just $500 and Darren then sold a few parts from it to recover some of the cost. He chose Toyota’s 4.5-litre twin-cam four-valve petrol six-pack because, as he says, “If I went for a diesel, it would’ve cost a lot more.”

Cut ’n’ shut
With so many dual-cab utes on the market these days, you might ask why Darren would go to the effort to convert a Land Cruiser wagon himself. Well, for one, he wanted a vehicle with live axles and coils front and rear and, two, he needed a project that would show off his metal fabrication and mechanical skills to potential customers.

“Being a business vehicle, this is the first time I’ve wanted a dual-cab truck,” Darren says. “And basically I had to prove myself.”

“I stripped everything out of it; went back to a bare shell, except the dash, then I measured it all up, cut it, got a 75 Series window for the rear, formed the whole rear wall by hand, and just tried to finish it off really nicely. It has a nice curve right around it.

“I then reinforced it all; I’ve used some parts out of the wagon section [to do this]. I’ve cut the reinforcement out and re-used it in the rear of the dual-cab. The engineer was really happy with all the work that I did.”

He must’ve been a happy engineer, because he signed off on Darren’s work and the dual-cab Cruiser is completely legal.

“With the hood lining inside, it’s come up real nice,” Darren says. “You wouldn’t even know that it had been cut; it looks like it came off the factory floor that way.”

Box on the back
As well as the cut-and-shut job on the body, the alloy tray on the rear is also Darren’s handy work.

“It’s full alloy,” Darren explains. “It’s only a 1200mm tray, so it’s quite short. It has a full drawer system in it, so you have two drawers either side, and it has a partition wall in the middle.

“On the passenger side I have a drop-down MSA slide for the fridge – it’s an 80-litre Waeco – and there’s a section behind that where you can put a couple of cartons of tinnies. There are a couple of custom-made tables that slide in the back underneath the two spare-wheel carriers. “On the driver’s side, you have your instrument panel, so all your switches and gauges and whatnot. It has a Redarc BMS 1215 battery charger in it, so it’s a 240V charger with a DCDC, and solar input as well.

“There’s a switch box with some outlets for charging phones and accessories. Each side has a Narva 10W floodlight when you open the doors, sitting inside on both sides. It’s all individually switched, it’s all Narva switching, and it has inbuilt circuit breakers so there are no fuses.”

The exterior of the tray has been painted in HSV Voodoo Blue to match the Cruiser’s refinished bodywork – it was originally white – and sitting between the two spares mounted on the back is a Narva LED work light. In fact, all of the lighting is Narva, including the taillights and indicators on the custom-built rear bar. 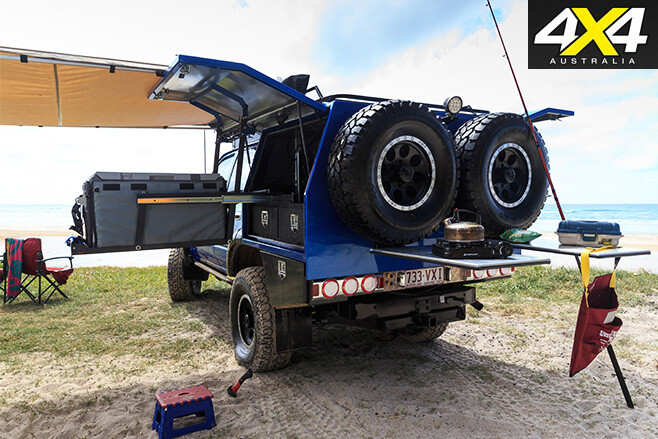 Darren also custom-made the two toolboxes that sit below either side of the tray. “One has a 120 amp Century battery in it and a water pump,” he says. “I’ve connected a shower up to it, so I have a hot water exchange unit, under the floor, hooked up to the cooling system of the car, so I can have hot showers out the back.”

Matching the high standard of the canopy’s exterior, the interior has been finished with nicely trimmed marine carpet, and the drawers are all individually lockable.

Wait, there’s more
Not content to fit any old off-the-shelf bar up front, Darren manufactured his own. It houses a 12,000lb Dobinson winch running plasma rope, and incorporates a pair of 100W Narva driving lights. It also has mounting points for the pair of Narva 225 HID driving lights.

Of course, Darren also fabricated the neat-looking rock sliders, as well as the roof racks on the cab and the tray, and even that tidy stainless steel snorkel. “The engine is still standard,” Darren admits. “It’s just got extractors and a two-and-a-half-inch exhaust and the custom stainless snorkel.”

The five-speed gearbox remains standard, too, as is the transfer case and the limited-slip rear diff; although, Darren has fitted an Eaton E-Locker in the front diff to aid off-road traction.

So why not put a locker in the rear? “It’s been purely built as a tourer,” Darren says. “It’s not the heavy-duty off-road thing, it’s not a rock crawler, but if you need to go off-road, it can.”

These days, with three kids under the age of 10, Darren does a lot of four-wheel drive touring rather than heading out bush to simply conquer off-road obstacles. “We do a lot of destinations; we don’t actually go out and play,” he says. “Fraser Island is a big one for us, Double Island, Teewah Beach, Cape York – I always try and do that at least once a year.

“We try and do our little trips, too, off to the dams in the South East Queensland area. We don’t go too far off the beaten track; even though we’ve got the shower and all that, my wife, with the kids, she doesn’t want to be too far away from civilisation in case something happens. Cape York is really the farthest we’ve been away… ” 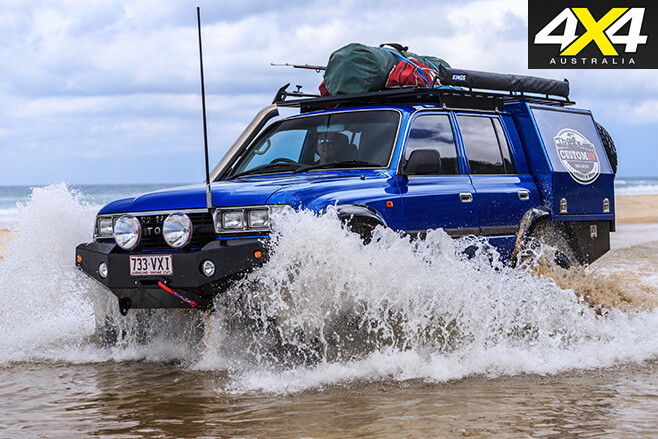 Even for Brissie-based Darren and his wife Sally, Cape York is still a bloody big trip if you’ve got three kids in tow, but he says there’s plenty of room in the back and he’s set up the Cruiser to keep them entertained. “We’ve got three kids – six, eight and 10 – and we’ve got TVs in the headrests; it’s got a Blaupunkt stereo system in it with DVD, Bluetooth, Wi-Fi, so they watch all their DVDs with surround sound all the way.”

The interior of the Cruiser is pretty much standard; although, in a concession to comfort, the factory front seats have been re-padded and recovered, offering vastly improved lumbar support.

How does it drive?
As you can see, this 80 Series sits a fair bit higher than a standard Land Cruiser. “It has a full Dobinson three-inch suspension front and rear,” Darren explains. “It has all the castor correction in the front, a steering damper, extended sway bar linkages front and rear.

It has all new adjustable upper and lower control arms on the rear; the sway bars have been lowered on the rear as well. It’s got Airbag Man bags on the rear, and 500kg overweight springs in the rear, too. “With the airbags in the rear, it’s stiffened up a fair bit,” Darren says. “Considering it’s such a tall vehicle, it drives quite well. I’ve rebuilt everything, I’ve gone through all the driveline, as in all the steering; it’s all been rebuilt.

There are Dobinson drag links, front and rear, so the diffs are back in the right spots, all the brakes have been completely overhauled and rebuilt, all the bearings, so it does drive quite smoothly.” 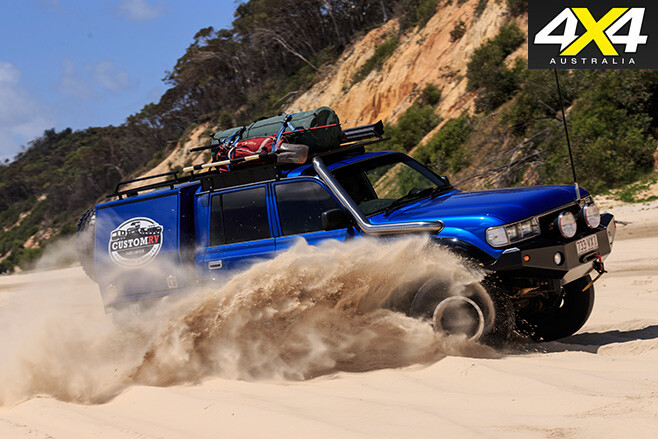 Of course, being a big petrol engine, the 80 Series gulps down the go-juice. “It is thirsty mate,” Darren laughs. “It gets around 22 litres per 100km.”

Not content with the present fuel consumption and performance, Darren says he’s considering dropping a 5.7-litre V8 under the bonnet sometime next year; although, that’s likely to further upset the bank balance each time he fills the 170-litre long-range fuel tank.

Going, going…
Although he’s extremely happy with how his dual-cab 80 Series has turned out, Darren doesn’t plan to hang on to this rig. Not for too long, anyway. “I’m using it as a promotional vehicle for a while,” Darren says. “The next one I want to do is a 200 Series. When that’s finished, I’ll sell this one off and just keep turning them over. 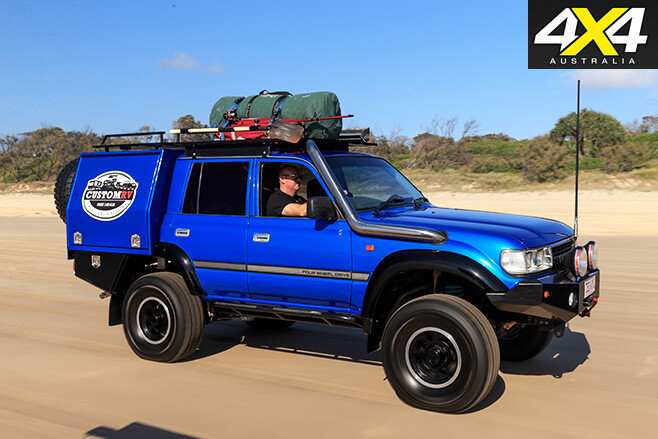 “This Cruiser is basically just something that I built for the business, so I knew I’d be turning it over, but I just had to prove myself, with what I could do here.”

And prove himself he has; this 80 Series Land Cruiser is one of the nicest dual-cab conversions we’ve seen in a long time.