Since the demise of Nissan’s venerable 4.2-litre six-cylinder turbo-diesel engine, GU Patrol buyers have had to opt for four-cylinder power in the form of the ageing ZD30 3.0-litre turbo-diesel.

But, weighing more than 2300kg, the GU Patrol is no lightweight and, for most, the ZD30 simply doesn’t cut it. So, other than looking elsewhere, what’s the solution for GU Patrol fans?

How about an AM General 6.5-litre Optimizer V8 diesel engine? Yeah, the one that’s used in the US Military’s HMMWVs and Hummer H1s.

That’s what the owner of this impressive GU Patrol, Adon Nguyen, squeezed under the bonnet of his rig. In the past, Adon has had a penchant for luxury cars and has owned a string of Beemers and Lexuses, so when the lads at Pacific Installs got him hooked on four-wheel driving he wanted something a bit special.

Sanh Tran, who looks after Pacific Installs sales and marketing, explains: “Adon wanted an overall capable vehicle. He looked around for a while, but couldn’t find anything that fit the bill, so he had a vehicle built from scratch.” 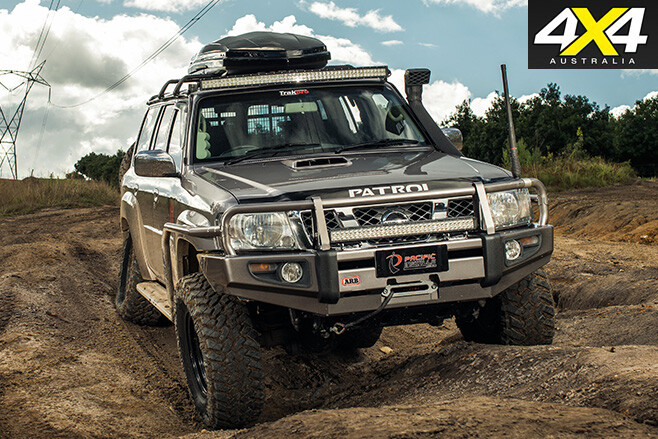 Pacific Installs enlisted the expertise of Western Australian company Brunswick Diesels to source and build the Patrol. Originally a red, 3.0-litre Patrol ST-L, Brunswick Diesels removed the engine, stripped the car back to bare metal and painted it in their paint shop.

Experts of all things diesel, Brunswick Diesels is a specialist in Optimizer 6500 V8 diesel conversions.

Greg Jones, Brunswick Diesels owner, explains: “We import about 600 engines a year, and we do about 300 Patrols a year. We bring the transmissions in separately. The engine and transmission is the same as the US Military Hummer has. We buy them brand-new from the factory.” 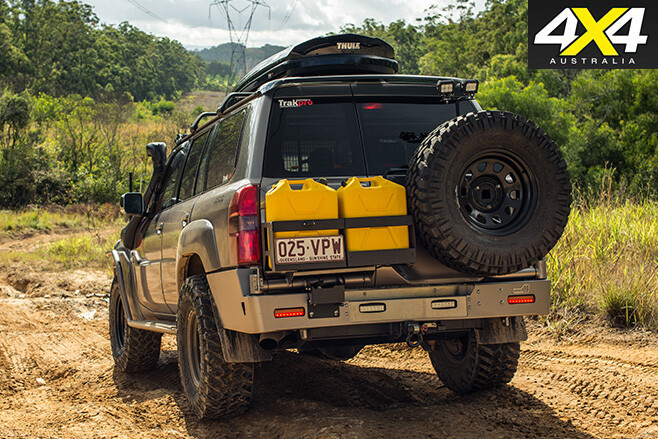 In standard US Military spec, the Optimizer 6500 V8 makes a somewhat conservative 153kW at 3200rpm and 597Nm at 1800rpm, and engine speed is governed to 3200rpm. Brunswick Diesels ensures that the engine makes a hell of a lot more grunt in a Patrol application.

“The power that they get out of them, they’re not getting anywhere near the ability of the engine’s power,” Greg says. “We use a different turbo which produces a lot more torque, and we put a higher output injector pump on it which is basically a 250hp (186kW) pump, and we get maximum performance…”

“The fuel pump is recalibrated by a pump shop not far from us which is set for Australian fuel standards, which are nowhere as good (as the US), and he changes the governor spring to a 4000rpm pack, and changes the fuel setting from 63cc to 78cc. “We buy our turbos from MTQ (Engine Systems), which are a Garrett turbo, a GT35, and it has a 0.63 exhaust housing. That gets them a lot more boost. A standard engine in the States is boosting about 8lb max. We’ve got them at 16 to 18lb.”

So how does it go? “It puts a really big smile on your face,” Pacific Installs’ sales and marketing boss, Sanh Tran, laughs. “That V8, on song, it just sounds absolutely ridiculous. It’s torquey; it’s everything that you’d want in a V8 truck.”

Sanh reckons it isn’t too bad on fuel, either, and that the touring range from this Patrol’s 165-litre diesel capacity is more than adequate for Adon’s needs, which includes camping trips from Pacific Install’s Underwood base to the tracks around the Glasshouse Mountains, as well as weekends on Fraser Island. With a trip to Cape York planned for next year, however, those two jerry cans on the Uneek 4x4 rear bar might see some action, too. 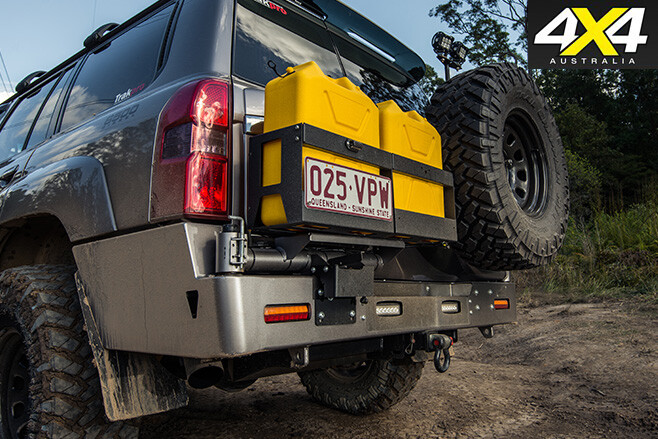 As you’d expect, off-road performance is impressive. “It’s just so easy,” Sanh says. “We’ve taken it on a couple of trips out on the beach; it’s just effortless on the beach, up through dirt and mud; yeah, it just takes everything in its stride. There’s nothing that we’ve put in front of it that it hasn’t been able to go over. It’s still under construction.”

Aiding the ease of off-road driving, the stump-pulling Optimizer 6500 V8 is mated to a four-speed GM auto gearbox with a lock-up torque converter, and the 4.8:1 diffs are equipped with Eaton ELockers, which are electronic, selectable differentials that provide maximum traction on demand.

Ensuring all that grunt does its job properly on slippery terrain are 35-inch Nitto Grapplers fitted to 16 x 8 Sunraysia rims. The suspension has also been heavily modified with a 2.5-inch lift, aftermarket springs and top-shelf Fox 4.0 remote canister shock absorbers. In addition there are adjustable Panhard rods front and rear as well as a Fox steering damper. “It’s only around a two-inch lift at the moment but it will soon get a four-inch lift,” Sanh says.

The new paint colour on the Patrol is a subtle but attractive Nissan 350Z metallic brown. The ARB Deluxe bull bar and sidesteps have been painted to match, as has the rear bar.

The ARB bull bar houses a Runva 12,000lb electric winch running Dyneema synthetic rope and operated by a wireless remote. The bar also acts as the mounting point for a Baja Designs 22-inch LED light bar. Complementing the lighting output are HID globes in the standard headlights and a 50-inch Baja Designs LED light bar on the roof. 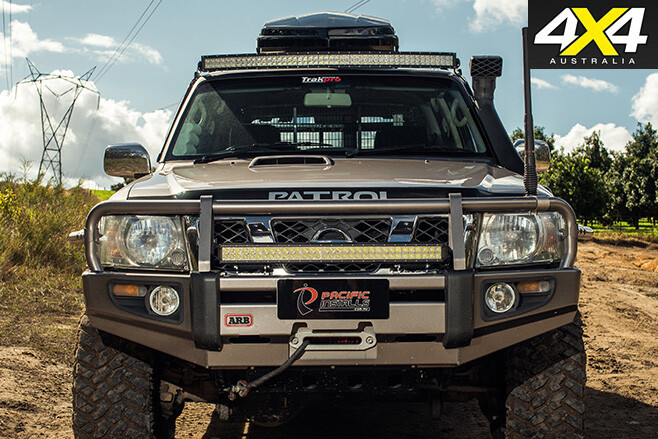 Down the blunt end, the Patrol’s Uneek 4X4 rear bar features a wheel carrier, dual jerry can holders and a work light, while all of the lighting in the rear bar is LED.

The cargo area of the Patrol is equipped with a drawer system that incorporates a cargo barrier and divider, as well as a fridge slide. Adon usually carries recovery gear in the drawers, along with air tools that are powered by the engine-driven Endless Air compressor set-up.

To carry extra gear that won’t fit in the drawer system, Adon has fitted a set of Rhino-Rack roof bars and an aerodynamically designed Thule roofbox that can be opened on either side for easy access to items. Capping off the exterior package, and ensuring that big V8 diesel gets nothing but clean, dry air, is a Safari snorkel, which will be put to good use when the Patrol tackles Cape York next year.

A dual-battery system with a Redarc BCDC in-vehicle charging system ensures there’s always plenty of power for lighting and accessories, and there are both 12V and 240V outlets fitted in the cargo area of the Patrol.

Up the front of the cabin Adon can keep an eye on how the vehicle is performing thanks to three A-pillar-mounted gauges that include oil pressure, boost pressure and EGT (Exhaust Gas Temperature) gauges. In the sunglasses holder on the roof is a custom LED switch panel. 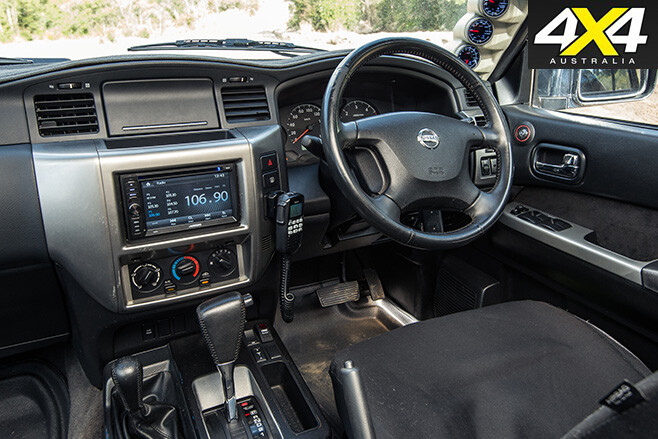 “The LED switch panel controls all the lighting, all the electrics, the light bars, the lockers,” Sanh says.

Looking after vehicle-to-vehicle communications is a dual UHF transceiver set-up, and a roof-mounted UHF speaker is fitted “to hear the radio over the sound of the V8”, Sanh laughs. “That’s a live tracking system that’s controlled by an app on your phone,” Sanh explains, “so if someone was to steal it without the keys in it, it would alert you by phone and you can shut it down live via the app. It’s a 24-hour live security tracking system.”

In this Patrol, Adon has shown if you can’t find the perfect vehicle to suit your needs, with a little research, the right budget and the right contacts, you can go out there and build it yourself. And if you’re going to do that, you might as well fit it with a stonking V8 turbo-diesel engine.