The best way to know how your fourby works is to do the mods yourself.

HE’S a gadget freak and proud of it.

This was first published in 4x4 Australia’s February 2011 issue.

One look inside Matt Beetham’s Toyota Prado and you can tell. The dash and roof are chock-a-block with meters, radios, leads and screens, and that’s just the start of it. It’s a well-equipped tourer, especially when it comes to keeping in touch with the rest of the world, and there are few places it wouldn’t go. 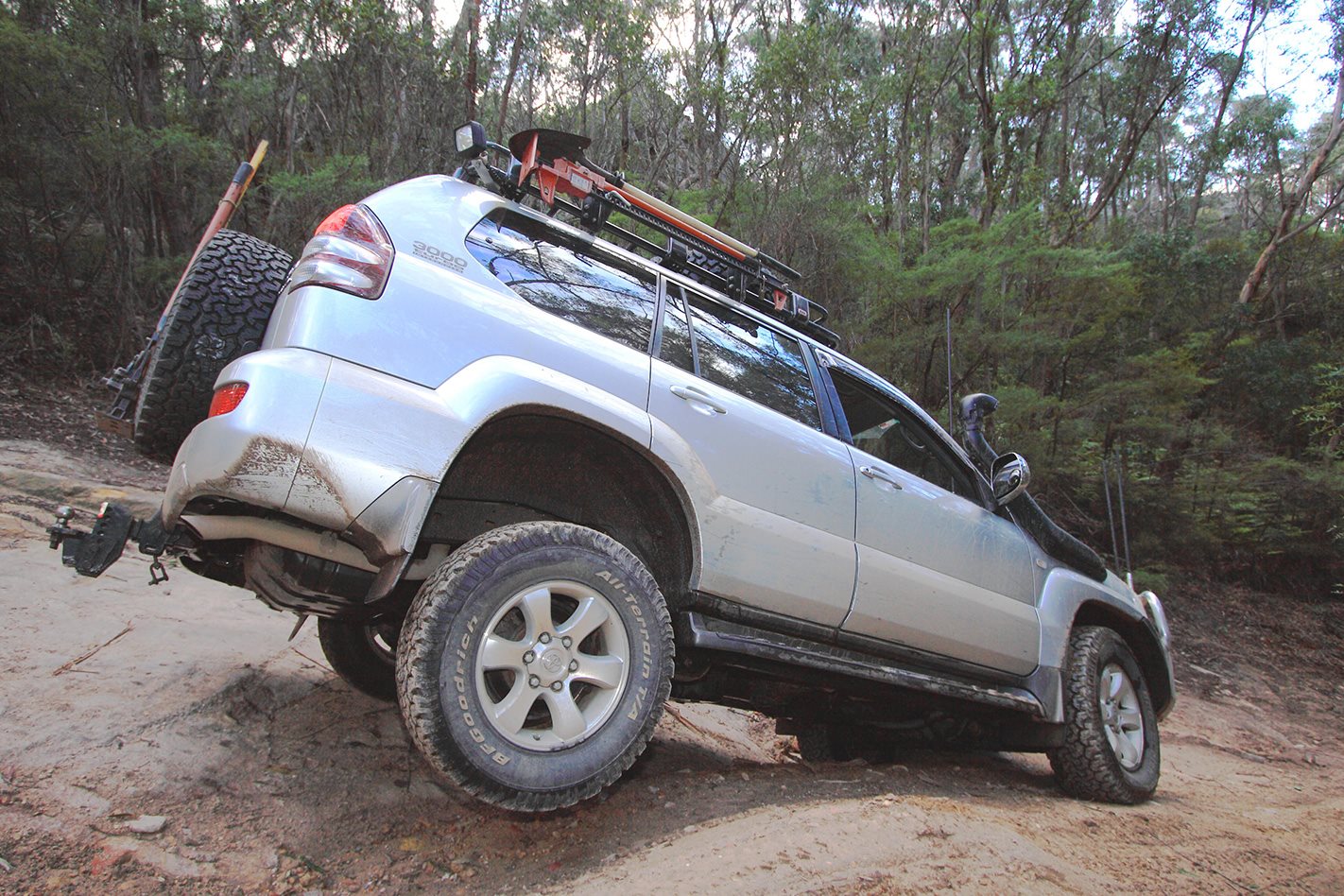 But it wasn’t always that way. I used to live around the corner from Matt and didn’t even notice a new fourby had moved into the neighbourhood – it was just another Prado.

“The car was in stock standard condition with only the bullbar and tow bar when I bought it,” says Matt. But it didn’t stay that way for long and I started taking notice the day I saw it wearing a solar panel on the roof.

Over the following weeks it sprouted antennas, grew several centimetres higher and began looking like a car owned by someone who likes the bush. Meanwhile, Matt was also doing renovations, and some days I’d spot him rendering or helping the concreters. I’d sometimes pass his half-opened garage door and hear banging and grinding going on. Must be a hands-on bloke, I thought, and resolved to say g’day.

Sure enough, turns out Matt had done most of the work on his Prado – only the Repeller alarm was fitted by someone else. He’s come up with a good mixture of store-bought and hand-made features, then put them together himself. It’s not his first shot at it, after setting up two 4X4s in the past, and he’s settled on a set-up that’s based on experience. 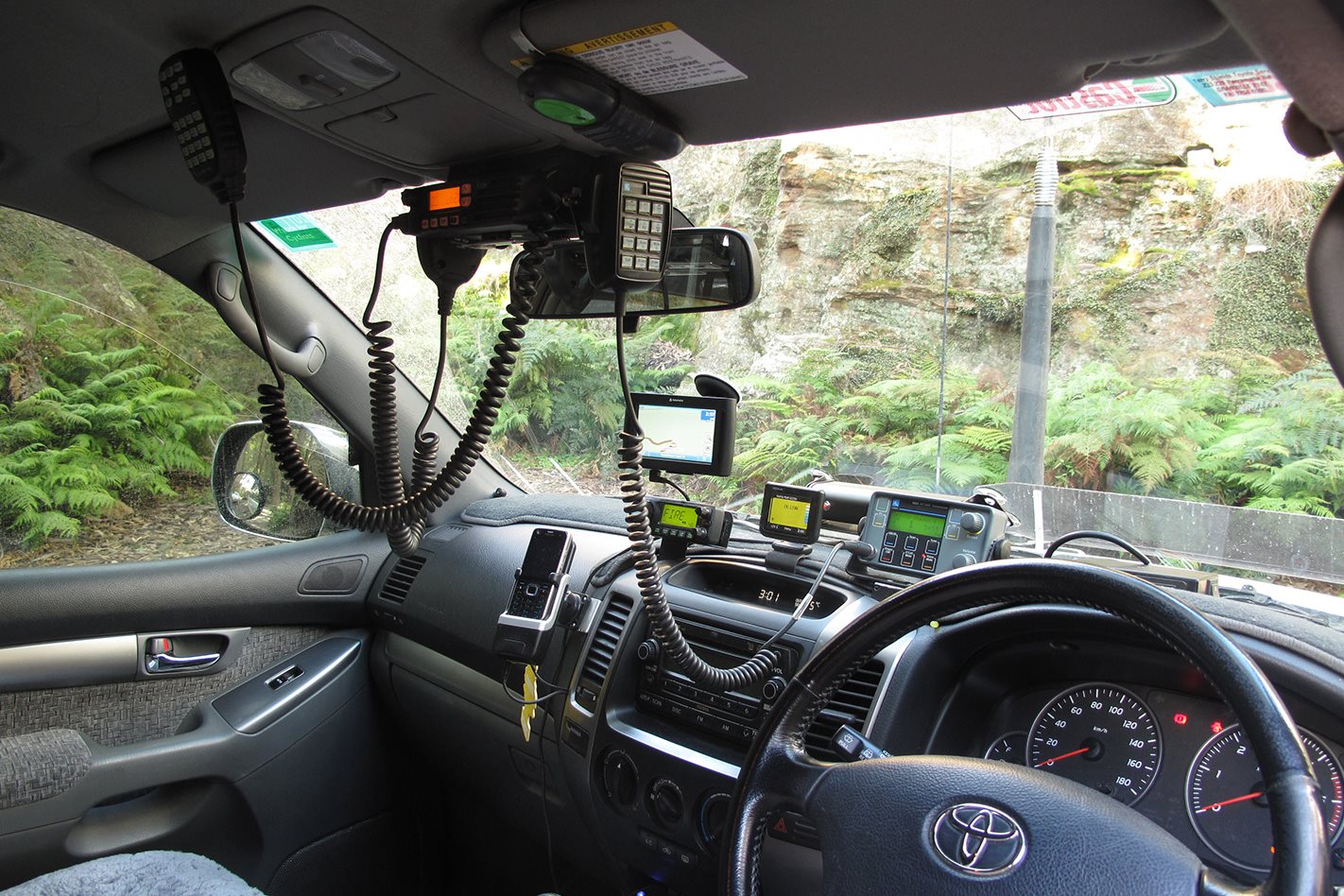 He’s a veteran when it comes to two-way radios. “I’ve been into radios since I was 16,” Matt says, “and I had a UHF base station at home.” He still has one, too, and given that he and partner Paicy both work close to home, and both their cars are UHF-equipped, they save a lot of money on phone calls!

The Prado doesn’t end with just a UHF, though. You’ll notice four aerials on the bullbar, three for radios and one for the mobile phone. Inside the cabin, up on the roof, Matt mounted an Icom 400 Pro 128-channel UHF radio for general comms, which gets the most use.

The other Icom is a 208H UHF/VHF armature radio, which he mostly uses for scanning and receiving; he did have marine VHF programmed into it, but now it’s only set for UHF duties. The Codan 9323 HF radio, with its remote head mounted on the dash beside the Nokia car-kit screen, has around 400 channels, and Matt has programmed in the main ones like the Flying Doctor, VKS-737, weather channels and so on.

“I have Icom hand-held radios, too, so we can go walkabout in the bush or fishing,” he says. “Every radio has its purpose. I can listen to ABC cricket in the middle of nowhere,” he adds. 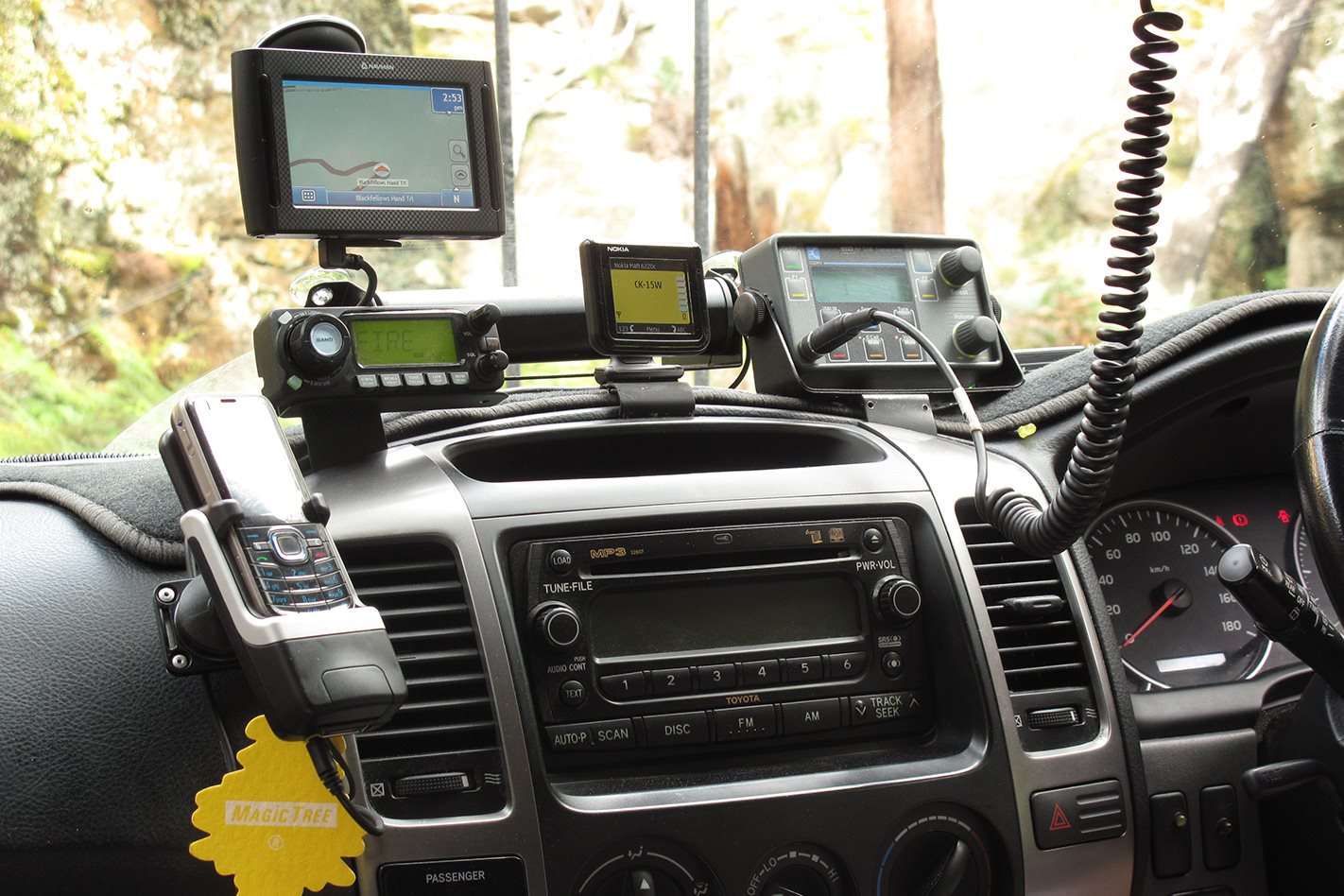 There’s no shortage of power behind the communications and other gear. Matt put a second battery under the bonnet – the same as the cranking one – and two 65 amp-hour deep-cycle batteries under the luggage system in the rear.

The under-bonnet batteries are separated by a Redarc 100-amp isolator, and the second one is held down on a tray Matt made from 40mm angle iron. He installed two battery-level gauges on the dash, one hooked only to the cranking battery, the other monitoring the three accessory batteries.

He has a 300-watt inverter “to keep the notebook computer powered while camping, which in turn keeps the kids happy during the wet weather.” Everyone’s kept happy by the 50-litre Waeco fridge. The Solarex 40-watt solar panel on the roof trickles charge to the batteries while they’re camping, and Matt says it does a fine job.

His party trick is the LED flashing orange lights inside the front and rear glass. “I’m just into gadgets,” he admits again, but there is a real safety benefit to having them: his job takes him into the ports, where being visible can prevent an accident. 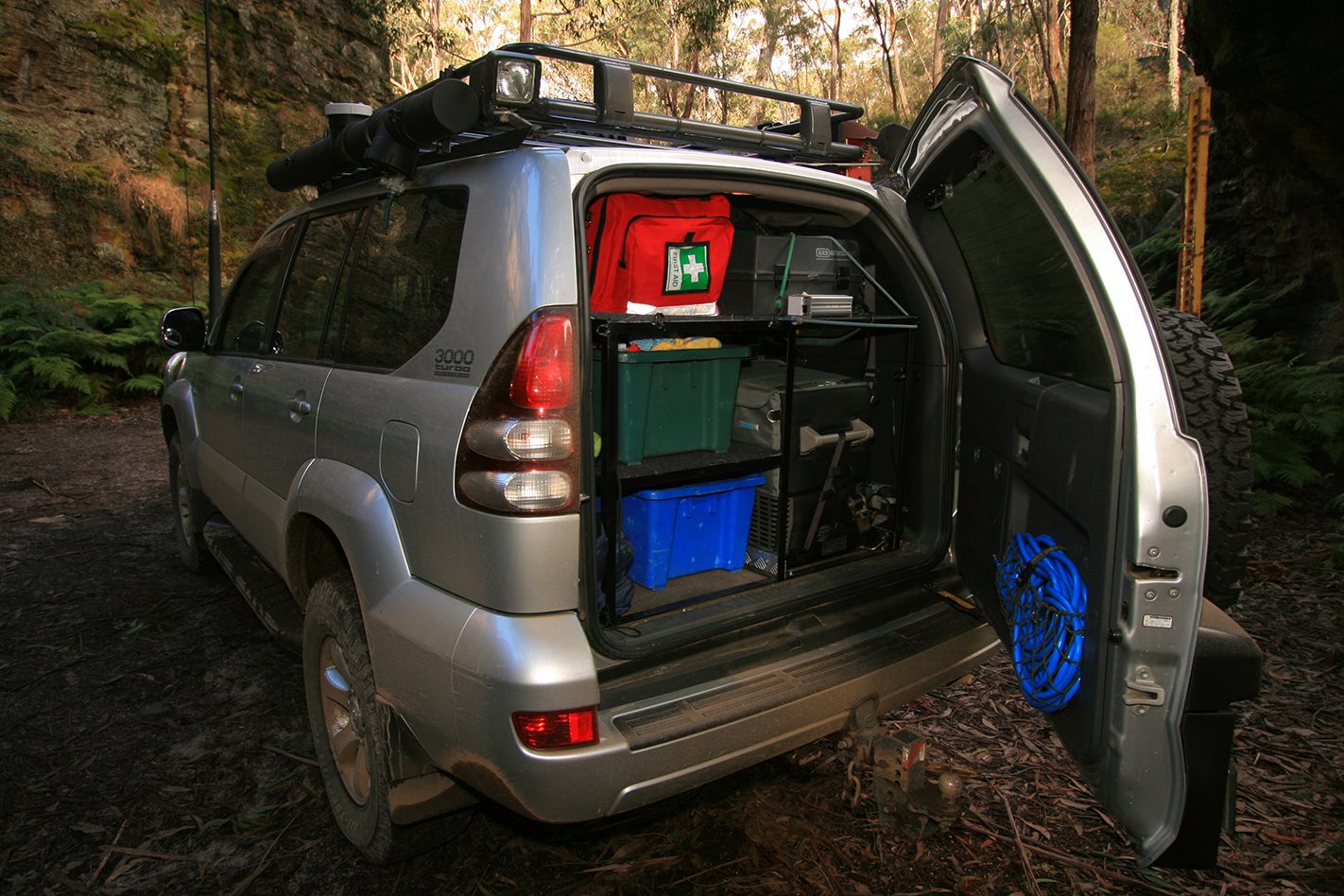 The Prado’s shelves are Matt’s handiwork. After measuring the interior, he simply welded together some angle iron to form the frame and used plywood for the shelves.

He bought a Black Widow slide for the fridge and boxes to hold the bits he keeps back there – things like a remote-area first-aid kit, 2.5-tonne hand winch with 30 metres of cable, a pair of 10m high-tensile chains, three 9000lb snatch straps, two winch straps and various shackles.

With the bullbar-mounted no-name 9500lb winch and the two high-lift jacks – one mounted to the bracket on the rear door, the other on the roof rack – Matt shouldn’t struggle to get out of a bog. The ARB roof rack is also home to a long-handled shovel, a second spare wheel and tyre, and about 20 litres of water in the 100mm PVC pipe, which has a tap and is primarily for washing with. 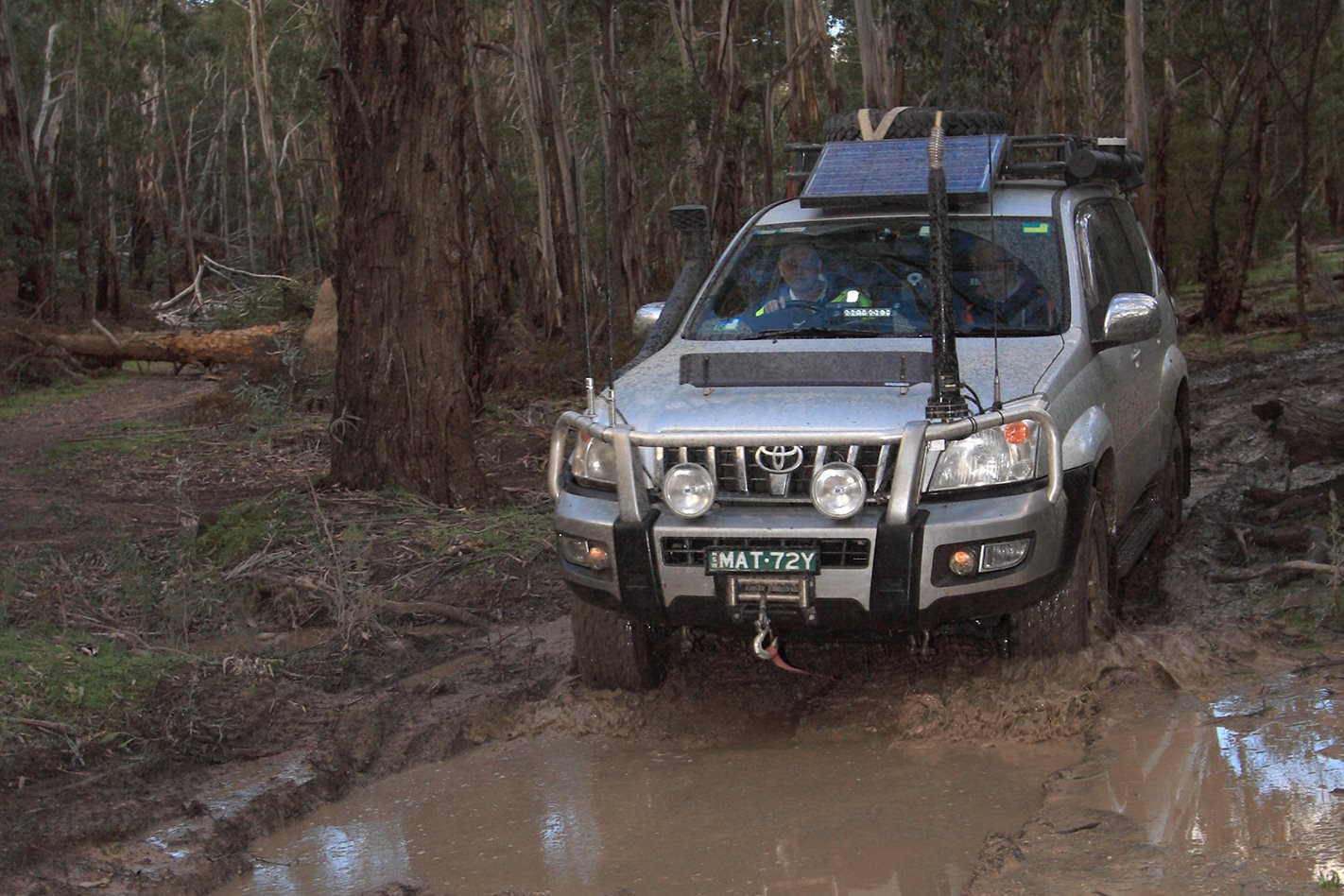 The spotlights on the bullbar are 130-watt Narvas, and Matt has a couple of always-handy work lights rigged up at the back on the fourby.

Matt attached the snorkel himself, a job only a confident and careful bloke would attack on his own. Drilling big holes in exterior bodywork is not for tyros, but Matt gives no indication that it worried him in the least. There’s a tiny mark on the paint where he slipped, but I’m sure only he notices it until he points it out to people like me.

The minute NSW vetted bringing in that ridiculous VSI-50 legislation which threatened the straightforward fitment of your common and garden variety suspension kit, Matt went out and installed one. He chose a heavy-duty EFS kit with the standard 50mm lift, but ended up getting more than twice the rise! 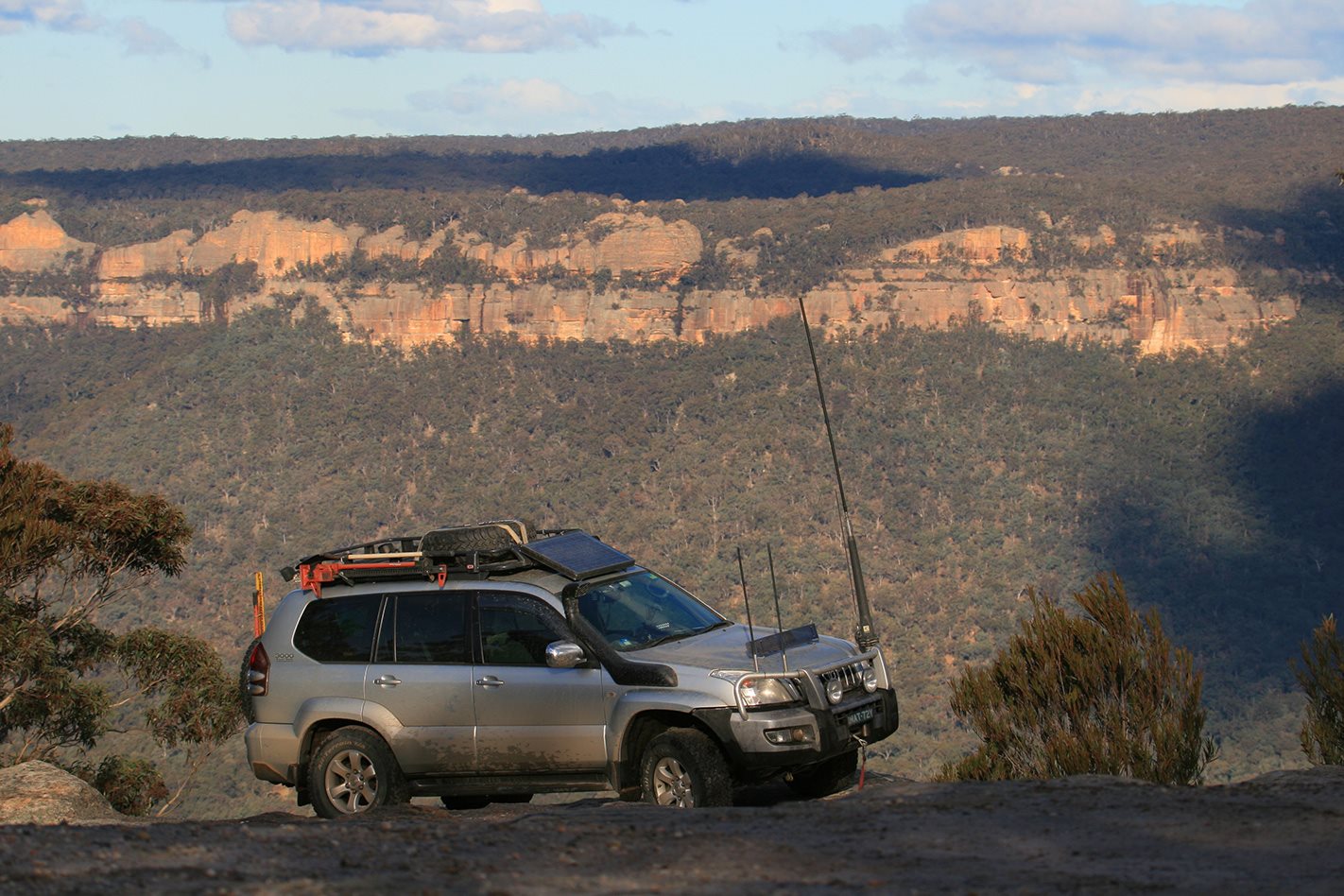 Not because he opted up, but because the standard springs were completely knackered. “I gained 110mm overall because the stock springs had sagged so much,” he says. He’d noticed his Toyota seemed a bit of a low rider. “You’d go to the shops and see other Prados and think, whoa – and that was before I added the weight.” He’s very happy with the EFS set-up.

Matt has added another gadget – a reversing camera, wired to stay on all the time. “I can tell the distance to tailgaters,” he laughs. He bought it cheap and fitted it in just one and a half hours. If that seems quick, he reminds us that “I’ve pulled that car apart so many times”.

One of the benefits of doing work on your own vehicle is that you get to know it a lot better. Matt knows his Toyota and its set-up inside out, having rigged similar systems before, and now done so much to this fourby. Watching it tackle trails and a few steep challenges on the day we spent photographing it, I can say it handles its load well and is sensibly built for having tons of fun in remote places – exactly what a good 4x4 should be.

GET AWAY? GET AWAY

Matt has one regret: after all this work, he’s yet to do a trip in his beautifully equipped Prado. Not even a weekend.

“Same old story,” he says. He and Paicy both worked shifts, and the rostering planets never aligned; now Matt is 9-5 and it’s no better. “And now with kids,” he shrugs. And the renovations. Life gets in the way! 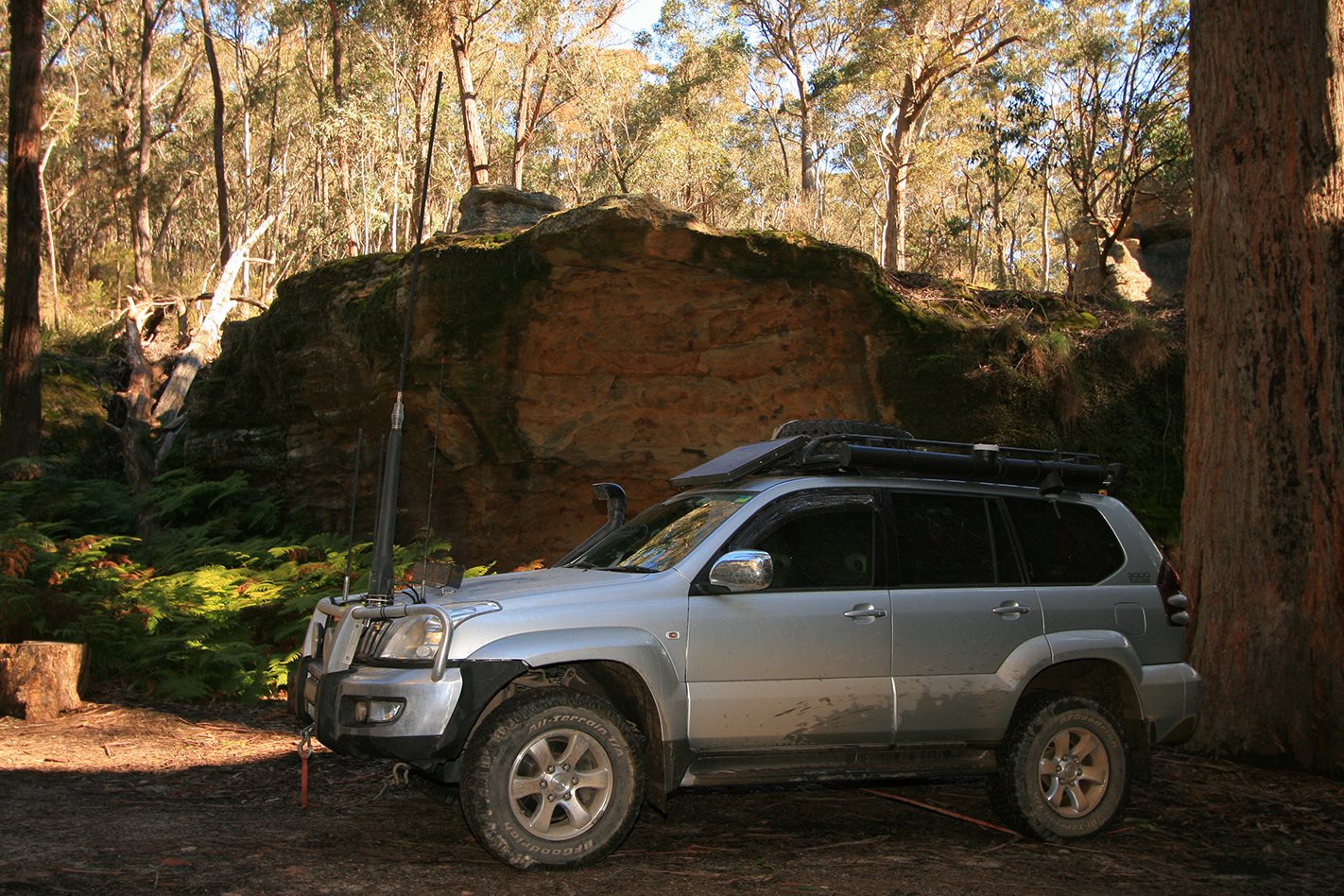 “We’re planning to do the Simpson or Fraser Island, but I’ve booked leave and my partner can’t get it,” he says. “It’s partly our fault for not dedicating it.” You get the feeling he’ll be dedicating it soon enough, though. With a rig set up for family camping, he won’t be shrugging off the impediments for too much longer.

“The kids love four-wheel driving,” he smiles. “They love the bumps and going through the mud.”

Matt has a soft spot for TroopCarriers. Not only has he owned two of the rugged Toyotas, he’d love another. Both 75 Series models, they were decked out similarly to how he’s now got his Prado set up.

“I’d just bought a ’97 model and we found out Paicy was pregnant. I ummed and ahhed, but by the time you put a seat in the back and fit baby seats...” Matt’s voice tails off before he says, “I should have kept it.”

He was close to buying a V8 Troopie but reckons the city dealer talked him out of it. He sounds surprised as he reveals it, but I wasn’t sure if it was more about the dealer not wanting to sell something or Matt letting him change his mind.

He’d like Paicy to take over the Prado so he can have a Troopie, but there’s one sticking point: “If my partner could drive a manual … we’ve discussed this. I’d definitely go back to a Troopie.” 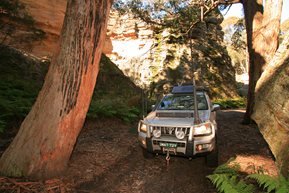