Suzuki’s tough little Jimny Sierra has gained a new lease on life thanks to the addition of electronic traction and stability control.

The little Suzuki you see here may look like a toy but nothing could be further from the truth. Sure it’s tiny, but tiny doesn’t mean tinny. This is an old school tough 4x4, just a very small one.

Old school in this case means a separate chassis and live axles back and front – just like a Toyota 70 Series, a GU Patrol, a Land Rover Defender or a Jeep Wrangler. It doesn’t get any more old school than that. The Jimny Sierra (its current but somewhat confusing name) can trace a direct line of ancestry right back to the very first Suzuki 4x4 that appeared in 1970; another parallel with the likes of the Land Rover Defender and the Jeep Wrangler.

You may be wondering why 4X4 Australia is testing what is a well-established, quite old, model like the Jimny. Well, the answer is simple. This ‘new’ Suzuki Jimny is fitted with electronic stability control (ESC) and electronic traction control (ETC) and has, as well, a few detail changes including new wheels, new gauges and a new steering wheel.

The fitting of the electronic chassis aids are the result of a lobbying effort by Suzuki Australia so that the Jimny could continue to be sold in Oz in the light of new safety regulations announced in 2009.Those new regulations deemed that from November 2011 all new-model passenger vehicles introduced into Australia were required to be fitted with ESC, while from November 2013 that requirement extended to all passenger vehicles. That meant that the pre-updated Jimny could no longer be sold here, although existing stock did carry over until September this year.

ESC brings well-proven safety benefits whereas ETC, which is effectively a secondary system within the ESC package, brings significant benefits off-road. A win-win situation all round.

A 1.3-litre four-cylinder petrol engine, first introduced in 2005, powers the Jimny. It claims 62.5kW at 6000rpm and 110Nm at 4100rpm and features, somewhat predictably, double overhead cams, four valves per cylinder and variable valve timing on the inlet side. It comes standard with a five-speed manual but here we are driving the optional four-speed automatic.

62.5kW isn’t going to translate into tyre shredding performance by any stretch of the imagination, but the Jimny has weight or, more precisely, lack of weight on its side. In fact, with a kerb weight of just 1075kg it’s around half the weight of a typical medium-sized four-wheel drive. In terms of power-to-weight ratio, that’s the same as having a 2150kg 4WD with 125kW, which is not unusual or unreasonable by any means.

As a result the Jimny gets along quite nicely on the road and doesn’t have too much trouble holding its own. At higher speeds, where the engine’s power is largely spent overcoming air resistance rather than weight, it does start to suffer however and long hills at highway speeds are certainly its nemesis.

Like all small petrol engines, the Jimny thrives on revs and there’s no doubt that the five-speed manual would make it easier to keep the engine on the ‘boil’ when confronted with hills and the like. Still, the automatic isn’t all bad. It has longer highway legs than the manual (see: breakout) and the ‘dog-leg’ shift gate allows you to swap from fourth to third and back again with a quick flick. And, given that third is a fair gap from top, the increase in revs is sufficient to conquer most highway hills.

The engine is however a bit noisy at higher revs, but not excessively so. And, being small in capacity, it’s always smooth. Keeping the engine on the boil doesn’t help the economy, but the Jimny still averaged a reasonable 8.9L/100km on test. The manual would do a bit better and, in the defence of our test vehicle, the engine was very new (just 43km on the dial when we picked it up). Fuel economy will no doubt improve as the engine frees up.

Not so good is that the engine asks for premium 95RON fuel – although at one stage during our 1000km test 95RON wasn’t available and we were forced to use regular 91RON; the engine ran fine. As you’d expect the Jimny doesn’t have a big tank, just 40 litres in fact, which means a touring range of around 400km; depending on conditions and how hard you drive.

Being so light the Jimny is a fun on-road drive, although the relatively narrow track and tall stance don’t work in its favour. It doesn’t inspire the confidence you’d expect from its light weight alone.

What is surprising however is that for a very light 4x4, with front and rear live axles, ride quality and stability on sealed bumpy roads is surprisingly good. Great brakes too.

Like most part-time 4x4s, loosely surfaced gravel roads are best tackled in ‘high-four’. This is a snack for the Jimny as the shift-on-the-fly 4x4 system works seamlessly. Having the newly fitted electronic stability control as a ‘safety net’ is also an obvious advantage on loose gravel.

While the Jimny is a fun on-road drive, there’s no doubt that it does its best work off-road. All of the live axle Suzukis, from the LJ50 on, have been great off-road thanks largely to their light weight, but this new Jimny takes all that to a new level thanks to its electronic traction control. Perhaps not as good as having aftermarket lockers back and front, but it’s still a significant step forward.

The Jimny ticks all the boxes. Light weight, decent clearance, handy wheel travel, steep approach and departure angles, a tight turning circle and good visibility. More under body protection would be handy, and of course, something more aggressive than the standard ‘Highway Terrain’ Bridgestone Duellers is a must.

The low-range reduction could also be better in both the manual and the auto, as steep rock climbing isn’t the Jimny’s forte. The auto’s crawl ratio isn’t as good as the manuals but it does have the advantage of the gearing multiplier effect of the torque convertor. The downside is that when the auto is ‘slipping’ it generates heat, and heat is always the enemy of any automatic transmission.

While steep rock climbing isn’t the Jimny’s thing, it’s pretty well unbeatable on the sand, particularly as an automatic. It’s very handy in mud too and, if you do get it stuck, it’s a hell of a lot easier to recover than something that weighs 2500kg or more. To that end it has one solid recovery hook (plus one tie-down hook) at the front and two medium-duty recovery hooks at the rear.

Not surprisingly the Jimny is pretty basic inside but has most of the essentials. Notable exceptions are a lack of any steering wheel adjustment and there’s no cruise control. Despite its simple and basic interior, the seats are surprisingly comfortable and the rear (two) seats aren’t bad for smaller adults. With the rear seats in place there’s only minimum luggage space, but with the rear seats folded there’s a surprisingly ample amount of space for a two-person weekend away. If would be even better if the seats folded completely flat, but they don’t, and the lack of luggage tie-down hooks is annoying.

Safety equipment extends to driver and passenger airbags, ABS brakes and, of course, the newly fitted ESC and ETC. Currently the Jimny is not ANCAP safety rated.

No matter what way you look at it, the Jimny is a refreshing change from the plethora of compact SUVs that have little or no genuine off-road ability. In contrast the Jimny is a genuinely capable off-roader and is built on well-proven, tough mechanicals. The Jimny, like its forebears, also has an enviable reputation for reliability, longevity and low running costs.

It does have its limitations but most of those, including its size, carrying capacity and outright performance just come with the territory. Above anything else, the Jimny is a completely honest 4x4. It doesn’t promise anything it doesn’t deliver and, if anything, it delivers much more than it promises. Whoever first said: “Good things come in small packages,” must have just stepped out of a Jimny!

The Jimny comes with the choice of a five-speed manual or a four-speed automatic gearbox. And, as is often the case, the final-drive gearing is different with the two gearboxes; 4.3:1 for the manual and a taller 4.09:1 for the auto. The transfer ratios also vary with the gearbox employed.

The wash-up of all this – after number crunching – is that the manual has a crawl (overall first-gear/low-range) ratio of 38.1:1 whereas the auto has a less useful crawl ratio of 31.1:1.

However, given the gearing multiplier effect of the auto’s torque convertor, the effective crawl ratio of the auto would be more like 43:1. At the other end of the gearing range, the ‘cruise’ (overall top-gear/high-range) ratio of the manual is 4.3:1 whereas the auto has ‘longer highway legs’ with a 3.75:1 ratio.

**Based on on-test fuel consumption, fuel tank capacity and a 50km ‘safety’ margin.

***Prices do not include government or dealer costs. The manual is $20,990 plus ORC. 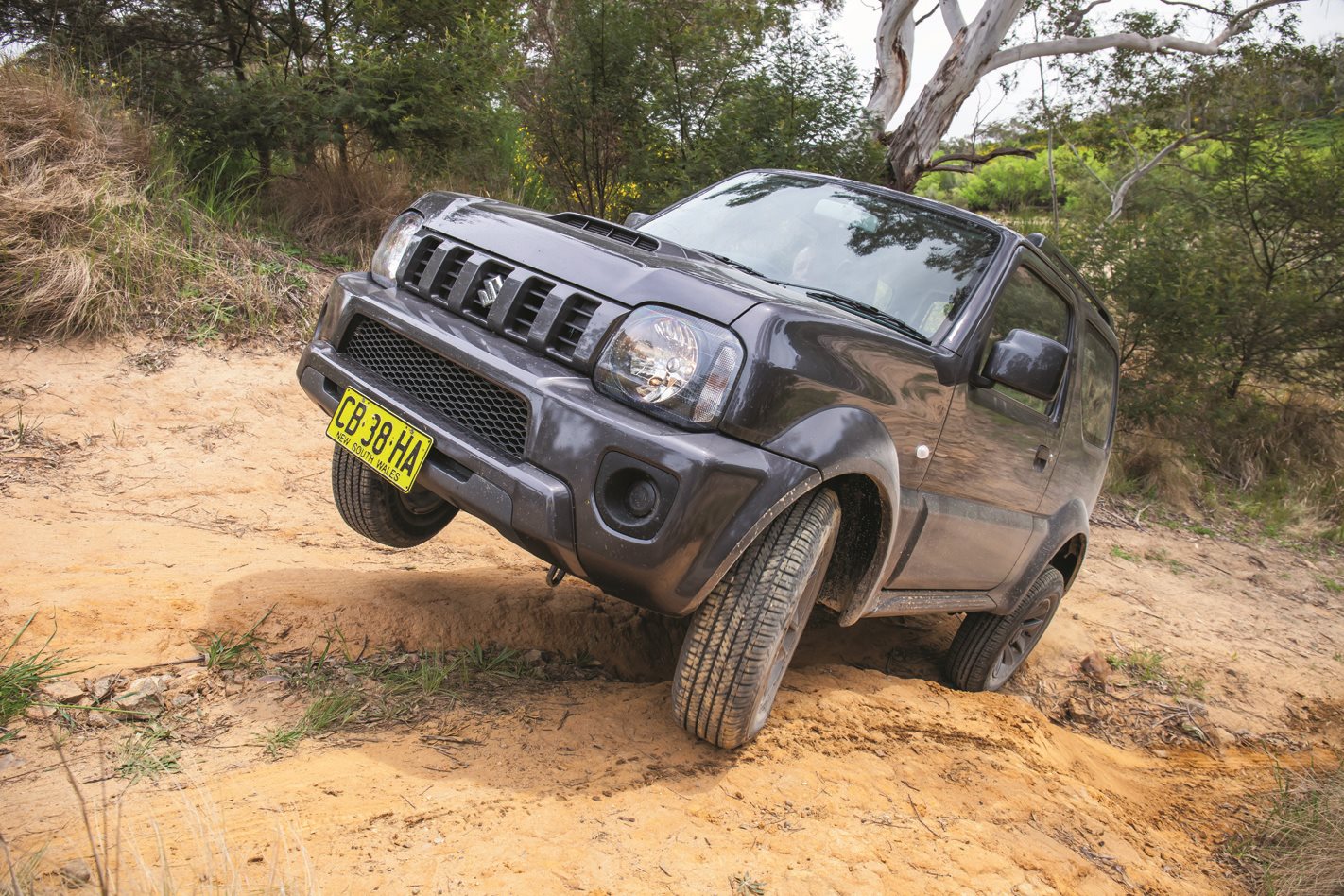 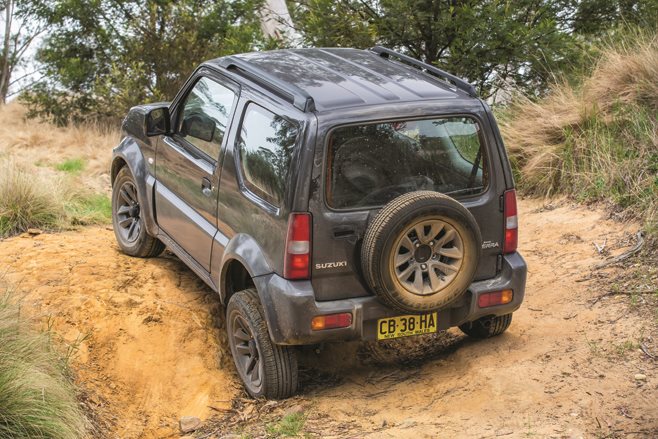 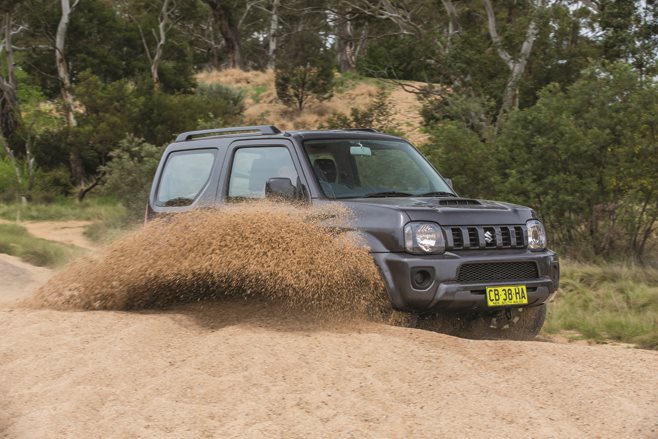 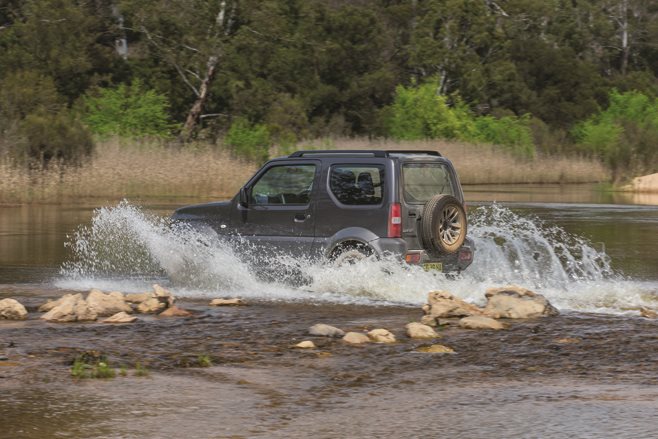 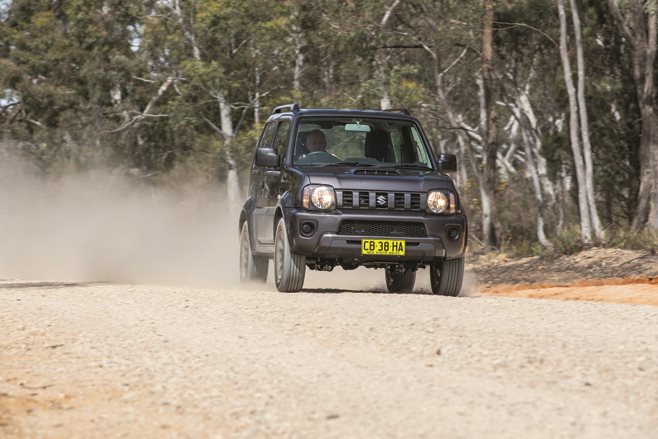 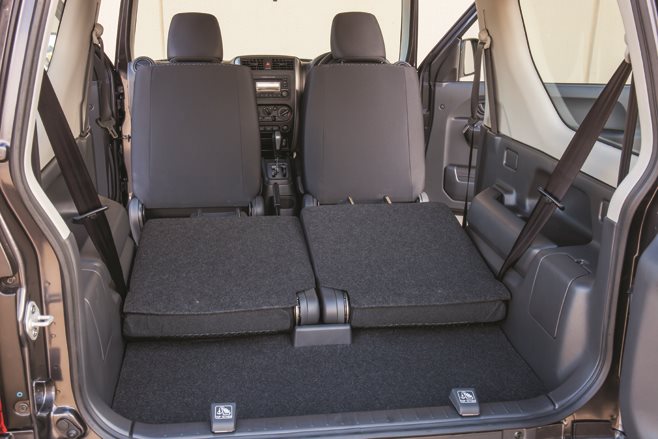 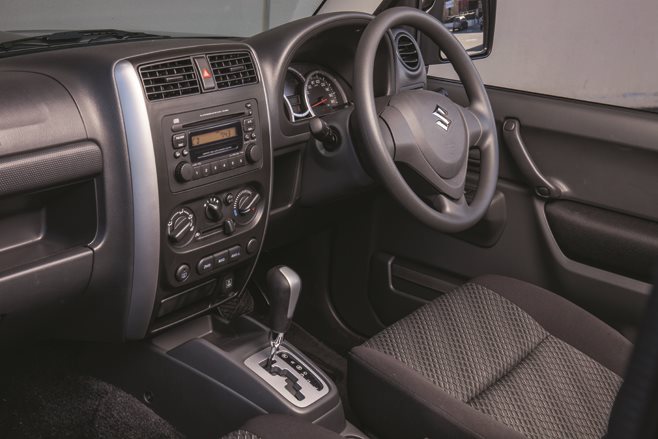 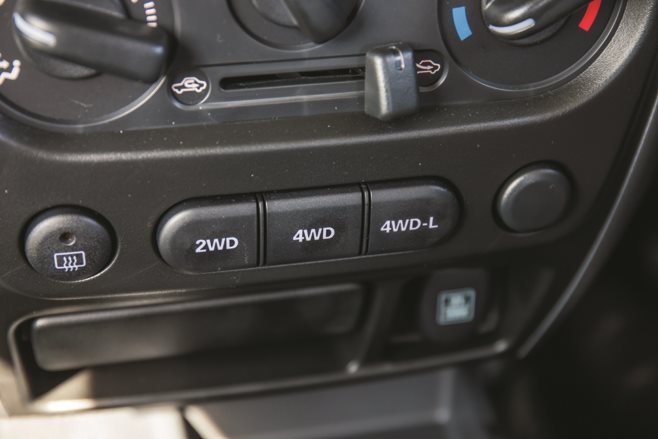 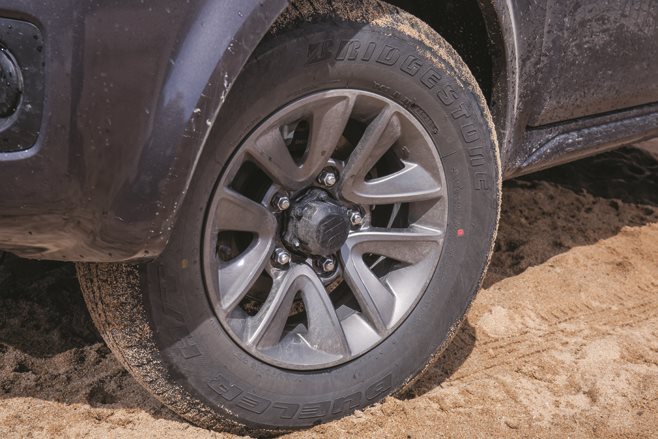 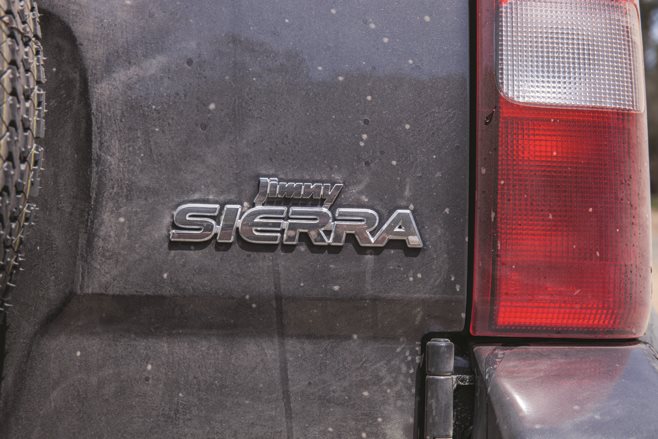 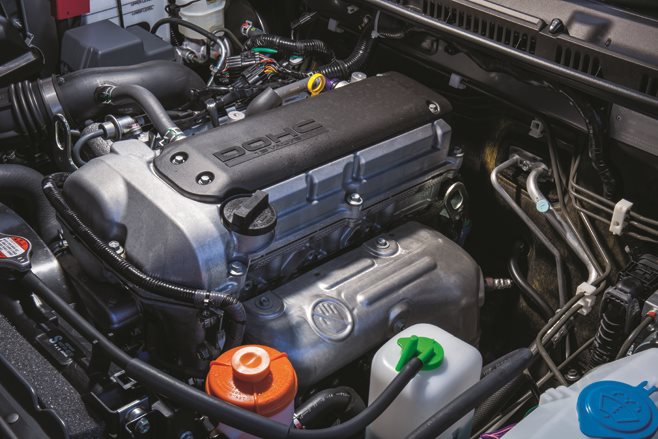